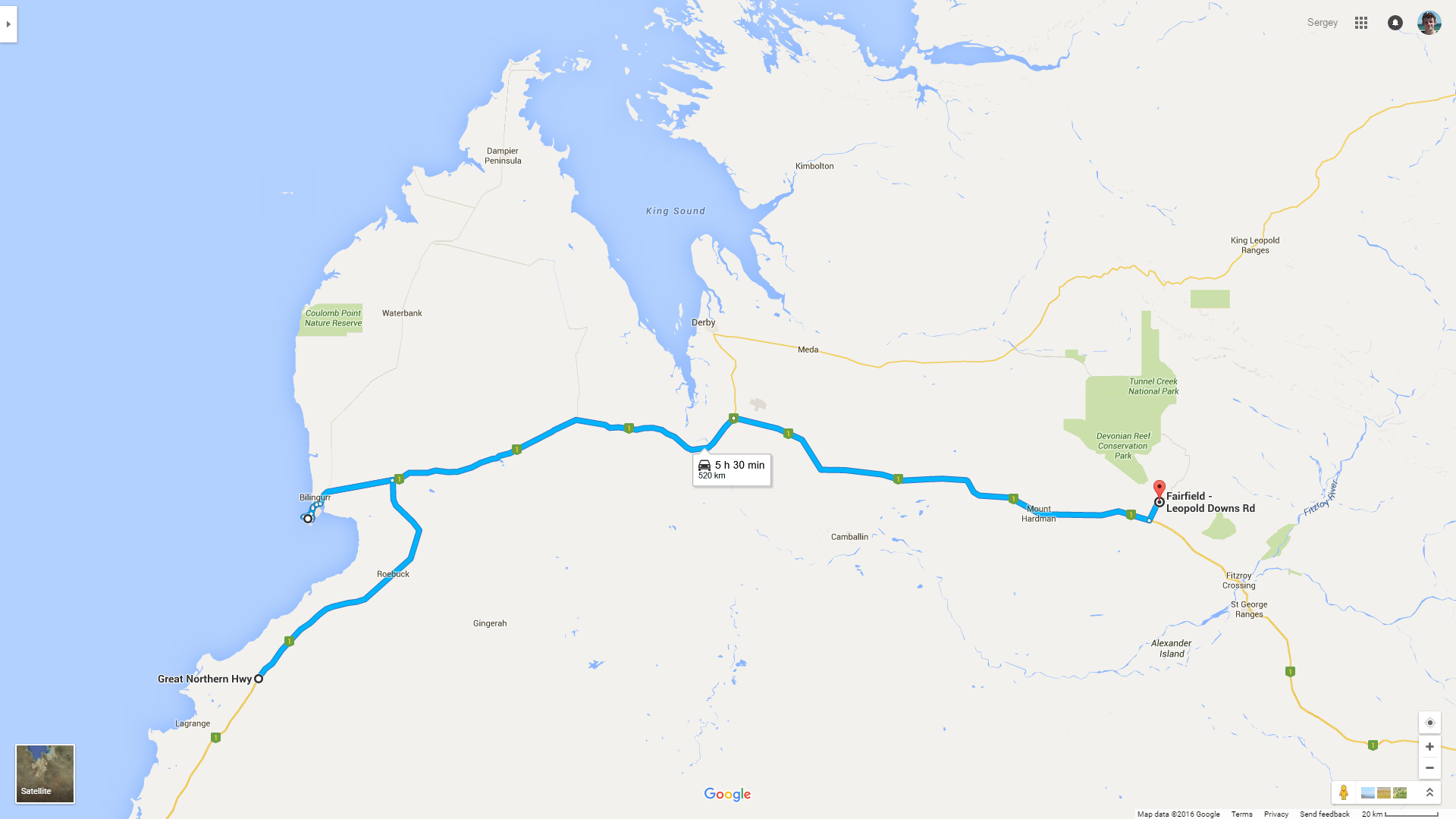 After an excellent night's sleep, we pack up and take off at 6:30 a.m.: a new record. Sun helps us in this, though, because it rises earlier and earlier each day as we move eastward.

The red, ancient Pilbara is finally behind, and now we're entering an entirely different region: Kimberley. Each new kilometre brings us more and more green vegetation. Sometimes it moves aside, replaced by vast pastures with cattle grazing on them. One herd is particularly large: at least a few hundred cows roaming leisurely here and there. But after a while these pastures are gone as well, and we enter Broome. 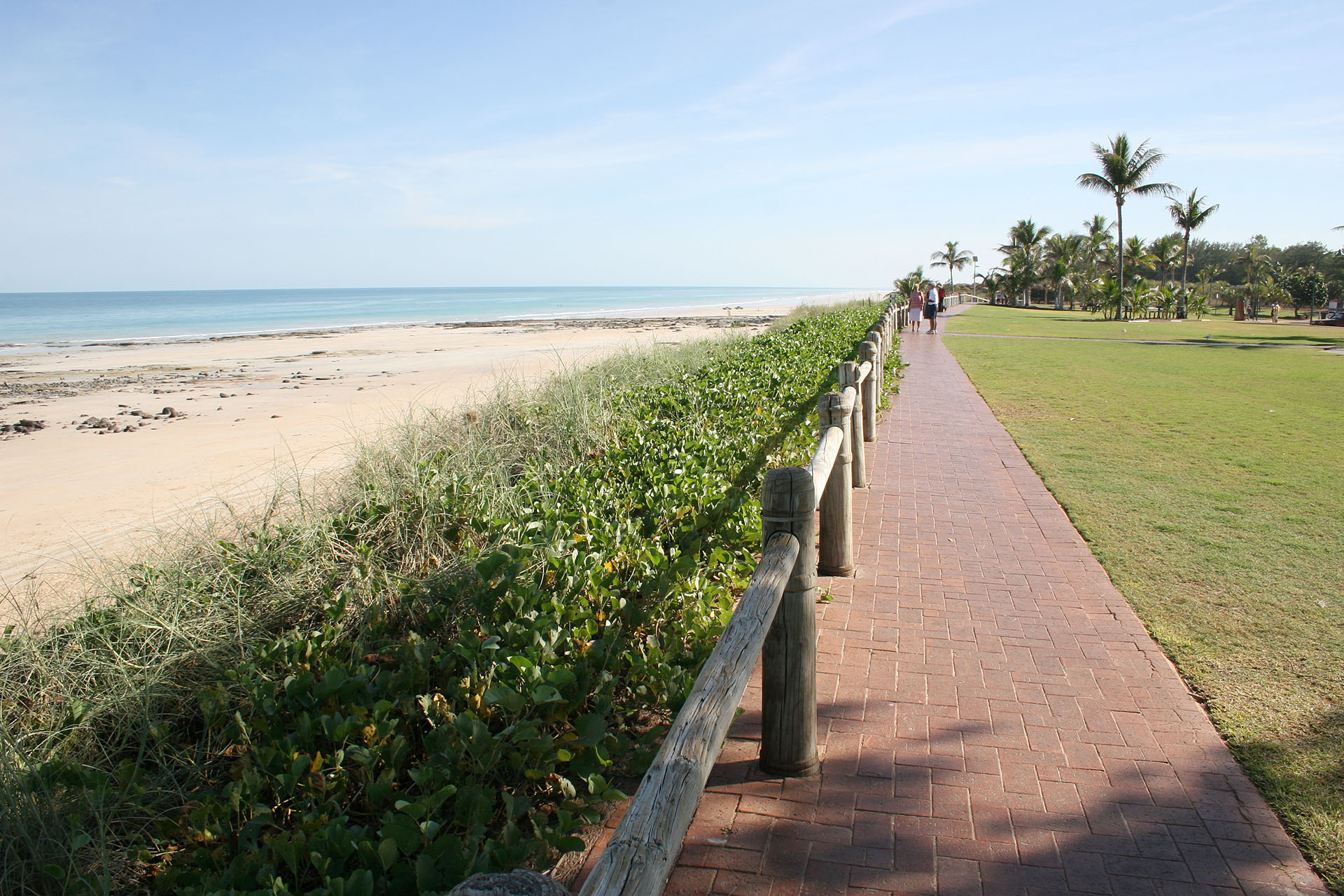 The coastline of Broome.

Broome instantly welcomes us with its warm humidity and its relaxed, slow vibe of a tropical resort. It's hard to believe that people can actually work and build careers here: it seems so silly here to do anything else except hanging out on the beach. Speaking of: as long as we're here, we decide to check out the famous Cable Beach, named after the telegraph cable from here to Indonesia that lies now on the ocean bed. 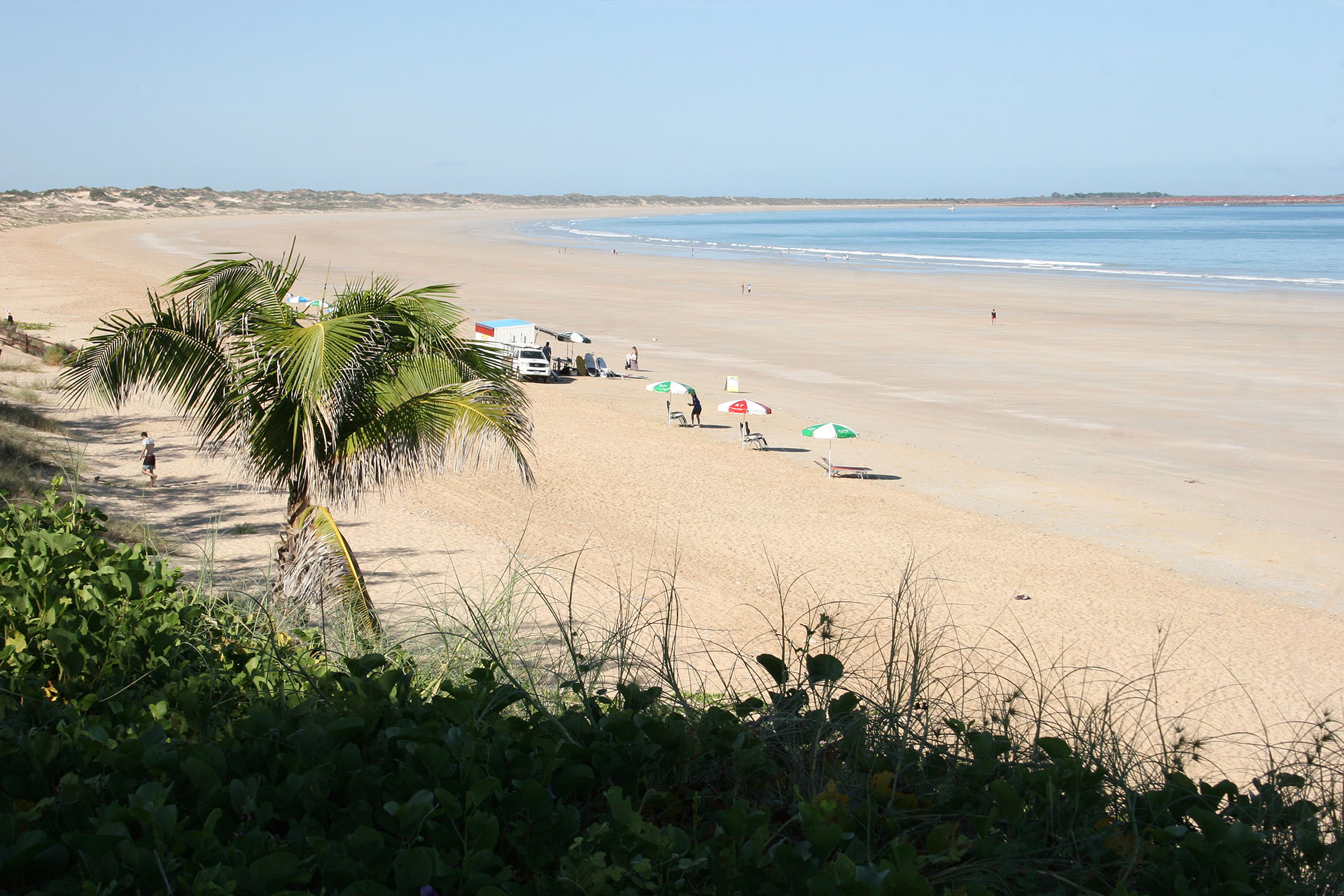 Here we finally take a dive, and now I can honestly tell that Cable Beach is the best beach I have ever seen. It's huge (not as big as Eighty Mile Beach, of course), it's not crowded (at least, not at this time of day), it's perfectly level, it barely has any seaweed, its surf is gentle and its water is pleasantly warm. I'd have gladly spent half a day here, but a) we gotta move on, and b) I didn't put any sunscreen on, and the tropical sun is merciless. So, 10 or 15 minutes later, I finally leave the warm gentle waves and walk towards the “shower” nearby. On my way there across the beach I see tiny crabs darting away from me and hiding in their tiny holes. 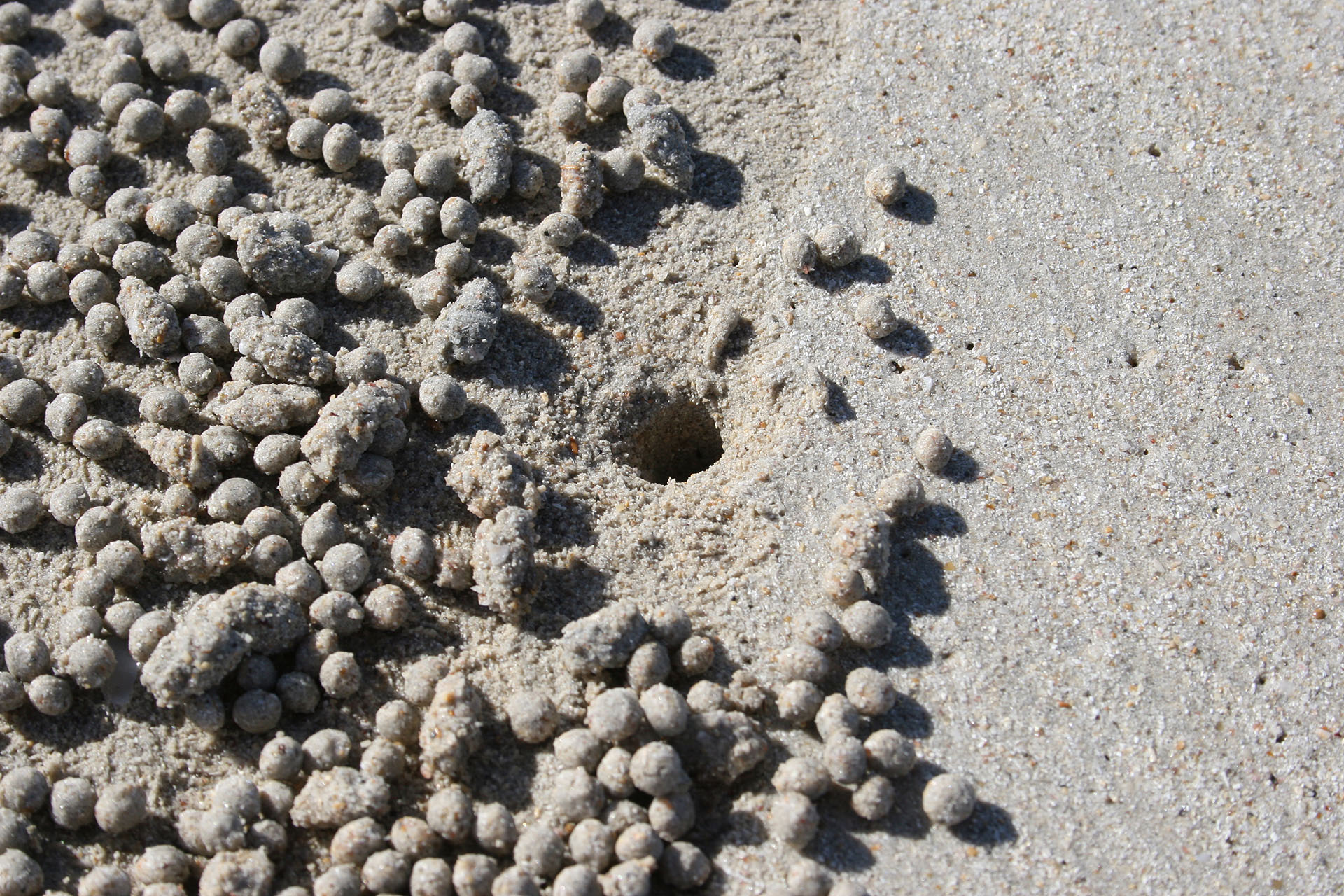 Home of a sand bubbler crab. These sand pellets are what's left from its lunch.

Broome is situated on a small peninsula, and its opposite coast is radically different. Not a trace of the softness and civilization of Cable Beach: only spiky rocks and red sandstone. 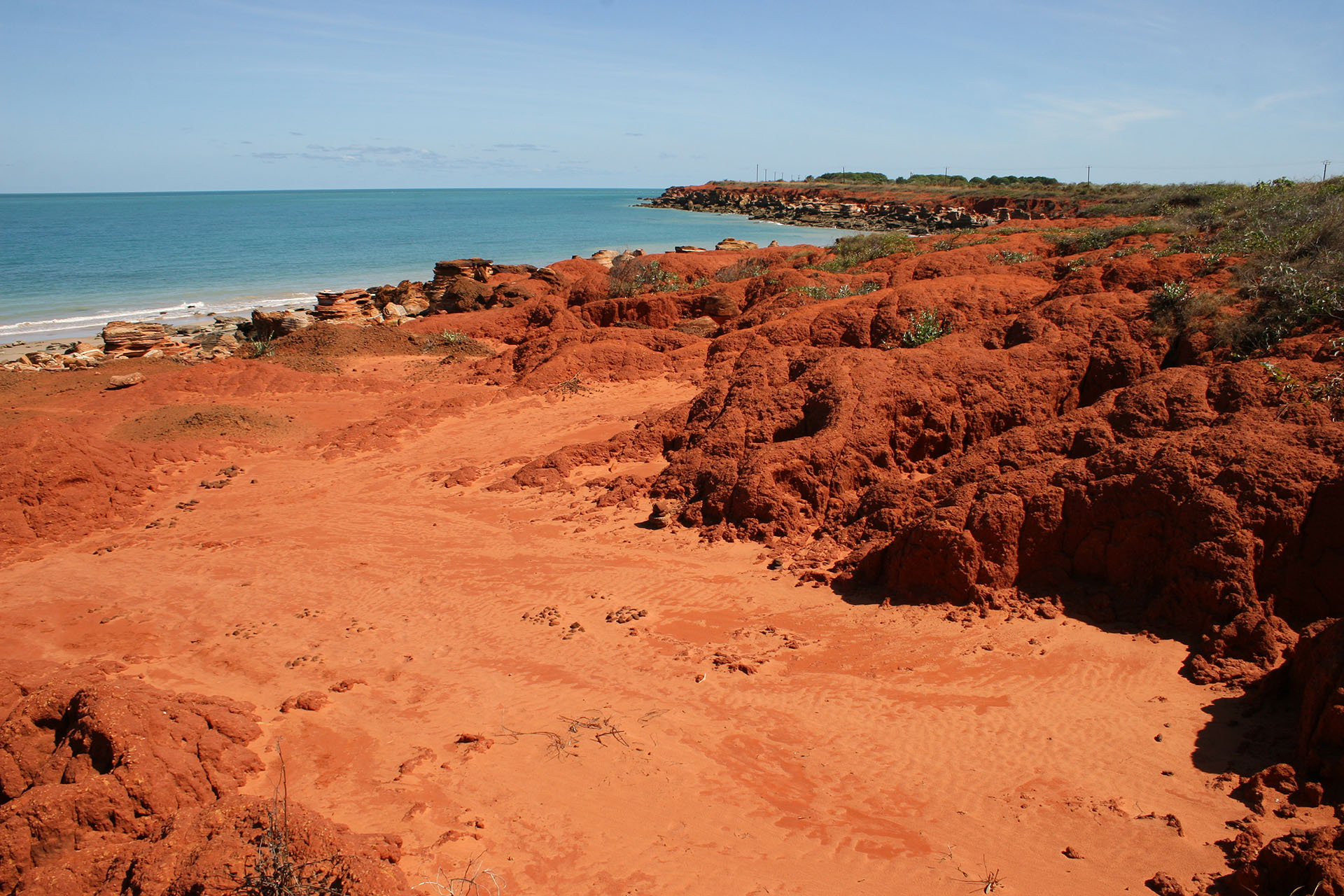 On the other side of the peninsula.

After that, we leave this pleasant tropical resort. As Alen talks about how cool it would be to stay there for half a year at least, we encounter the roadworks. One lane is blocked completely, guarded by the portable traffic lights on both ends. They must be operating on a timer, giving permission in turns to every lane.

Finally greenlighted, we drive on. The surrounding scenery is not a desert anymore, but savannah: short trees and dried grass with no undergrowth. Instead of undergrowth there are termite mounds, which appear more and more frequently and take more and more elaborate shapes. 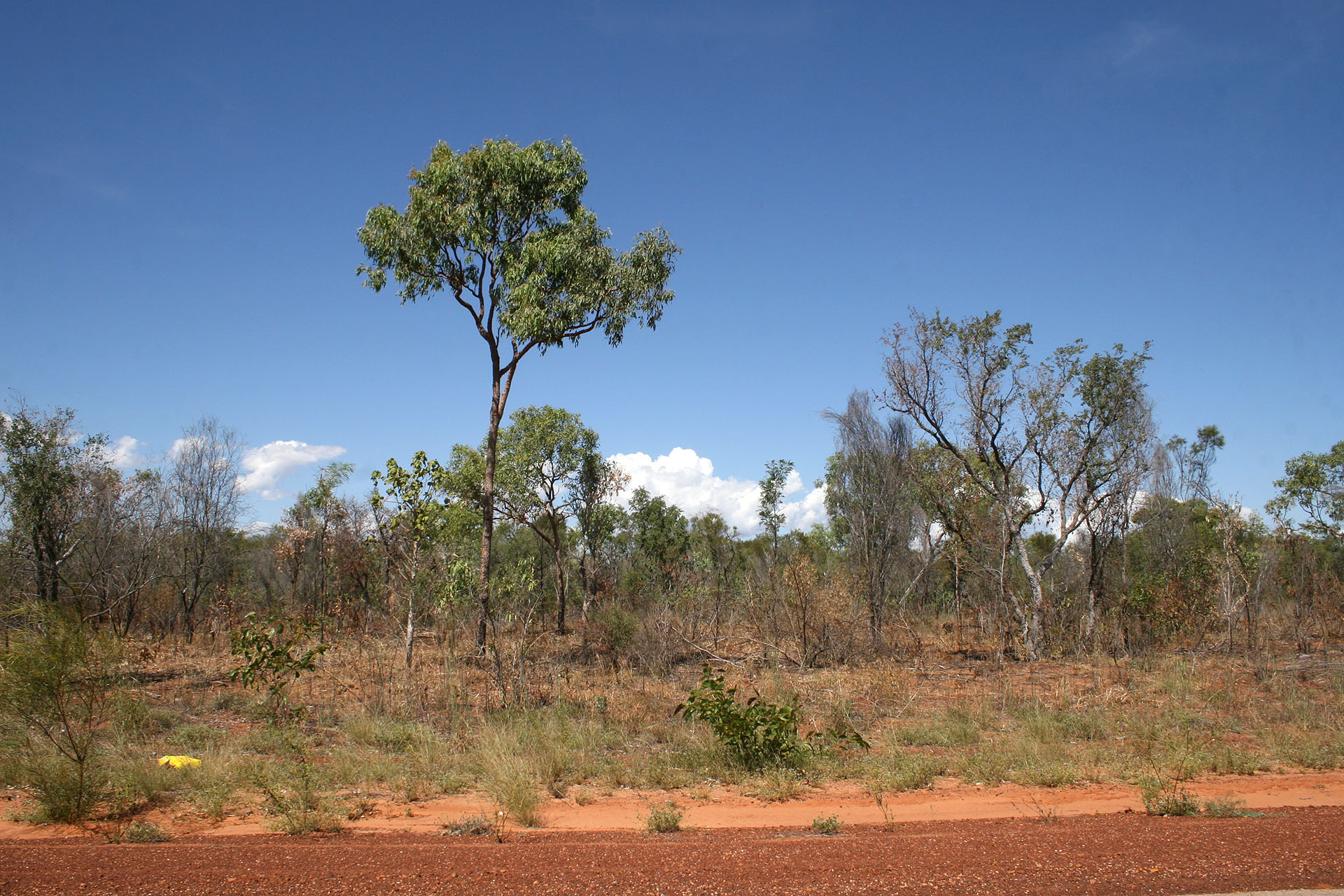 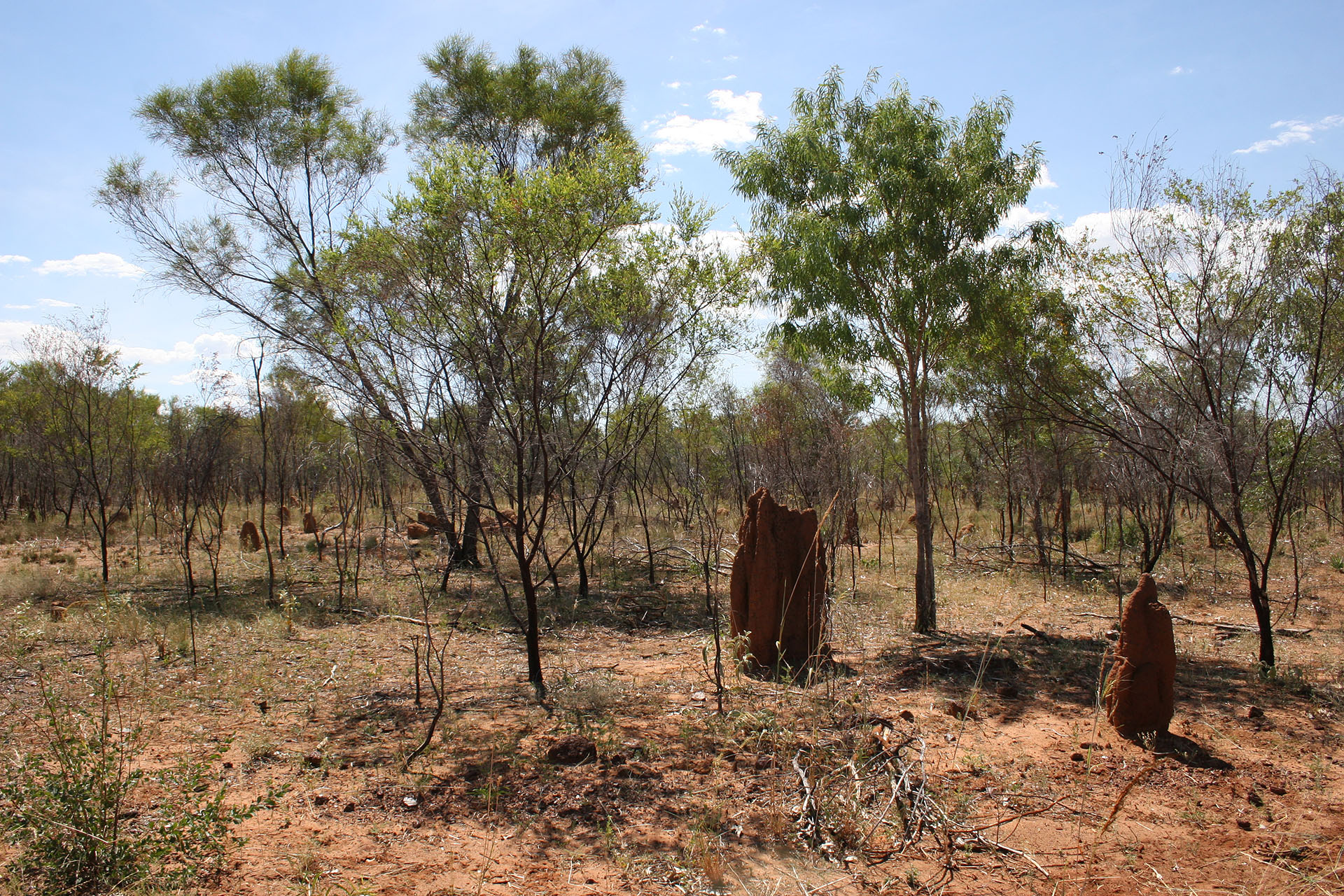 Sometimes they supplant the trees almost completely, and thousands of them cover the ground, like some kind of a termite forest. Very interesting landscape, I haven't seen anything like it before. 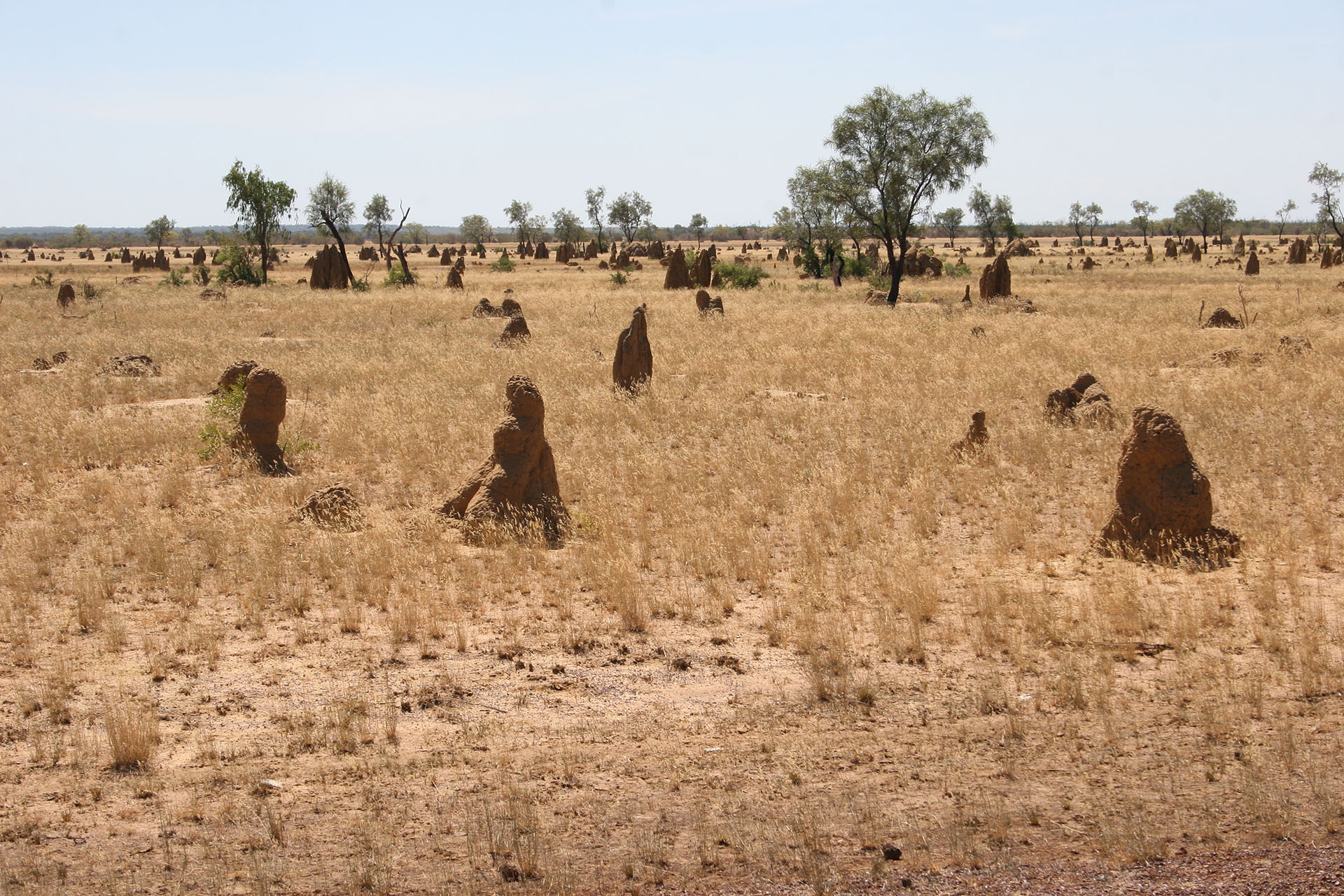 These termite mounds and this savannah stay with us until the end of our today's journey. Every now and again there's also a weird lonely tree with a thick, bottle-like trunk: they call them boabs. “Floodway” road signs become increasingly common, signaling the amount of rainfall this region receives during wet season. Deep creeks, either dry or barely full, are also seen more and more often. One-lane bridges are built across them: once you approach such a bridge, you have to slow down to 80 km/h and give way if needed.

We reach our destination for today: an abandoned stone quarry about 5 kilometres off the highway. The dirt track leading there is quite decent, and if you follow it further you'll reach the Windjana Gorge Park, which we aren't going to do. 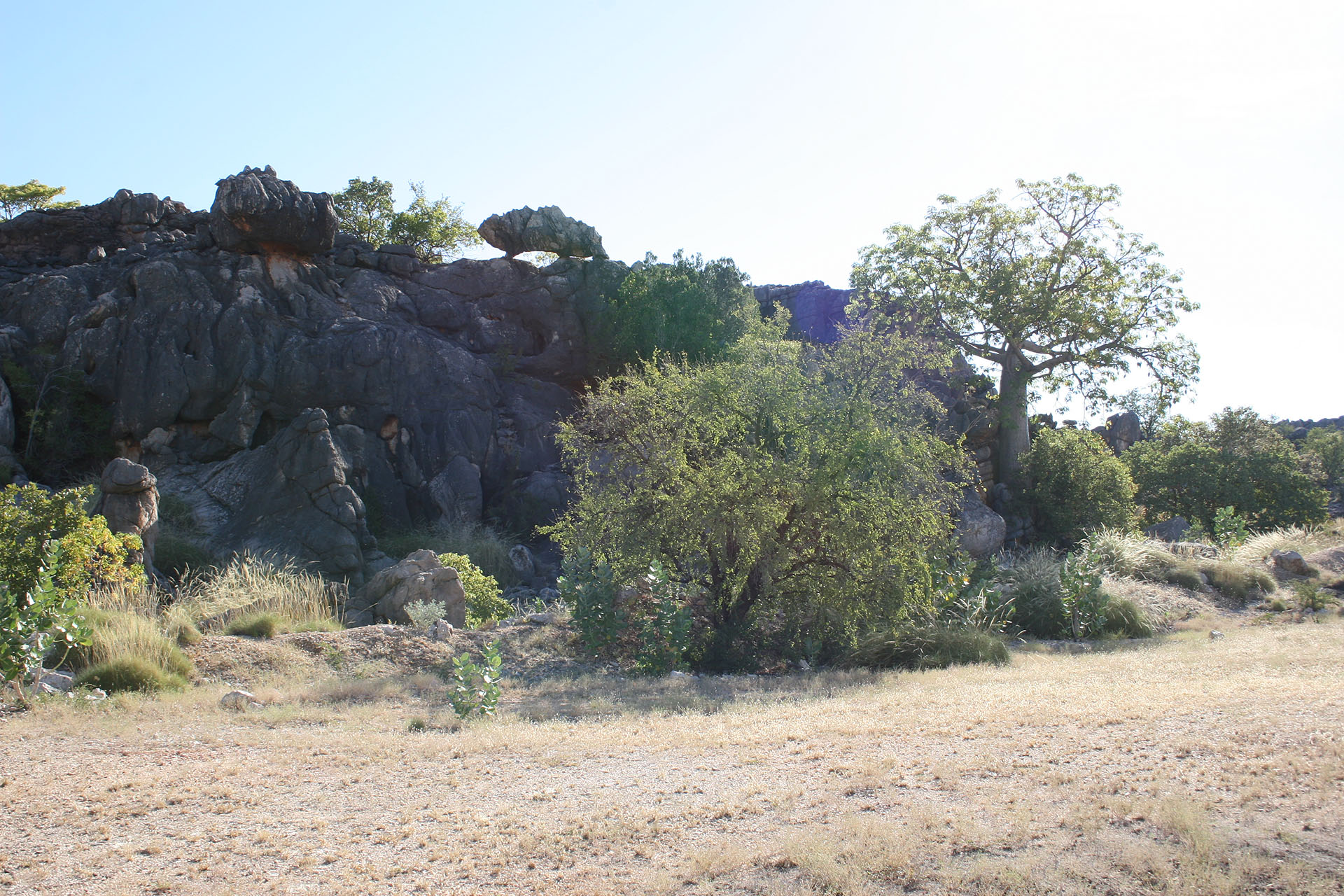 A proud boab amongst the limestone.

No mobile signal here at all. Alen frowns, a bit nervous: an important family talk is now not possible. However, we can't be bothered with packing up and looking for a new campsite, and there's not much time for that anyway. Instead of making phone calls, we decide to hike around a little when the sun sets a bit further down. 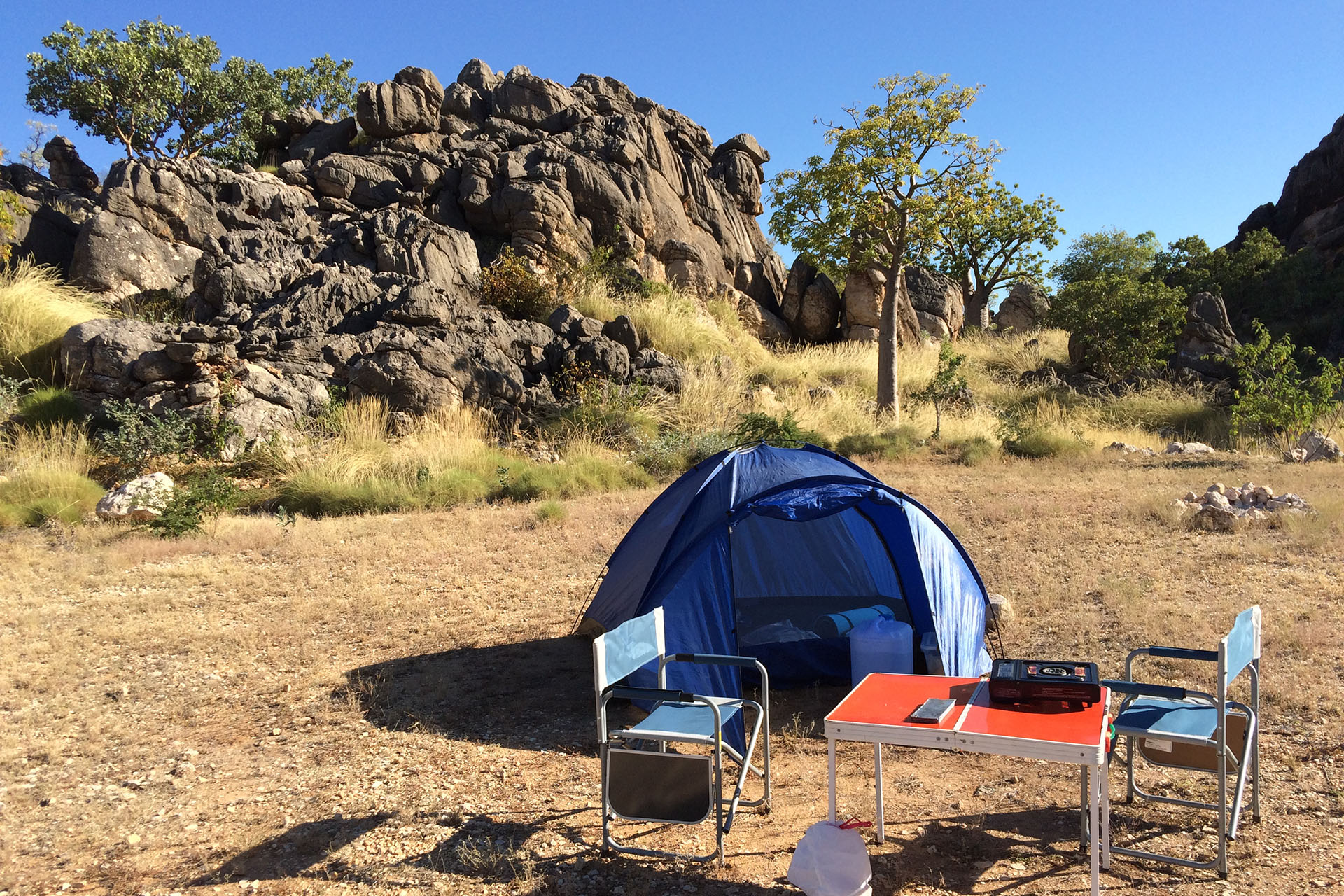 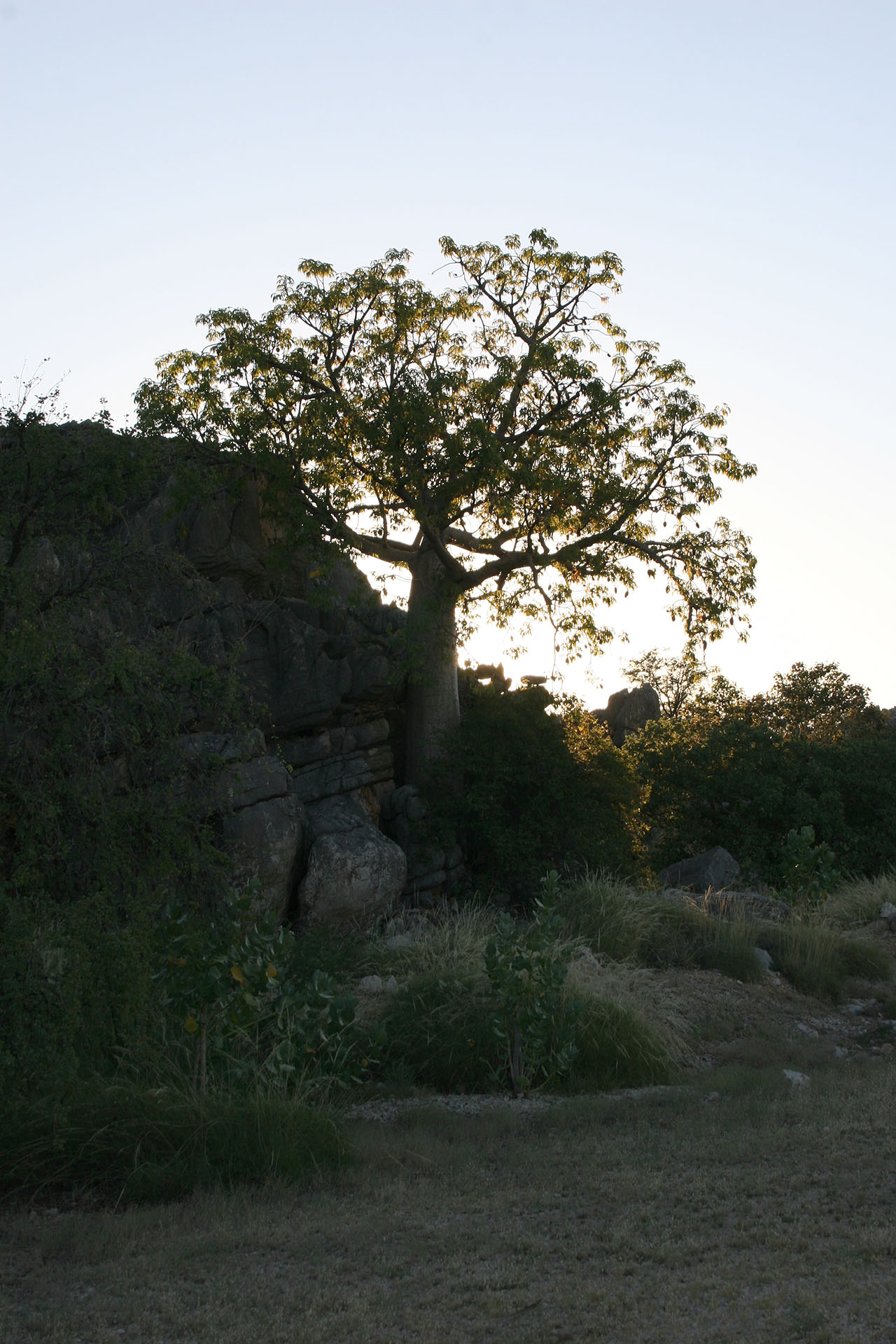 A proud boab during sunset.

Just because we've got nothing better to do, we climb at the top of a limestone ridge, navigating through the wiry, dry bushes and brittle dry grass. The carved, intricate limestone edges are quite sharp: if you don't watch where you place your hands and feet, it's very much possible to cut yourself. The climb is over in about five minutes, and it doesn't satisfy Alen at all, because there no signal there either. 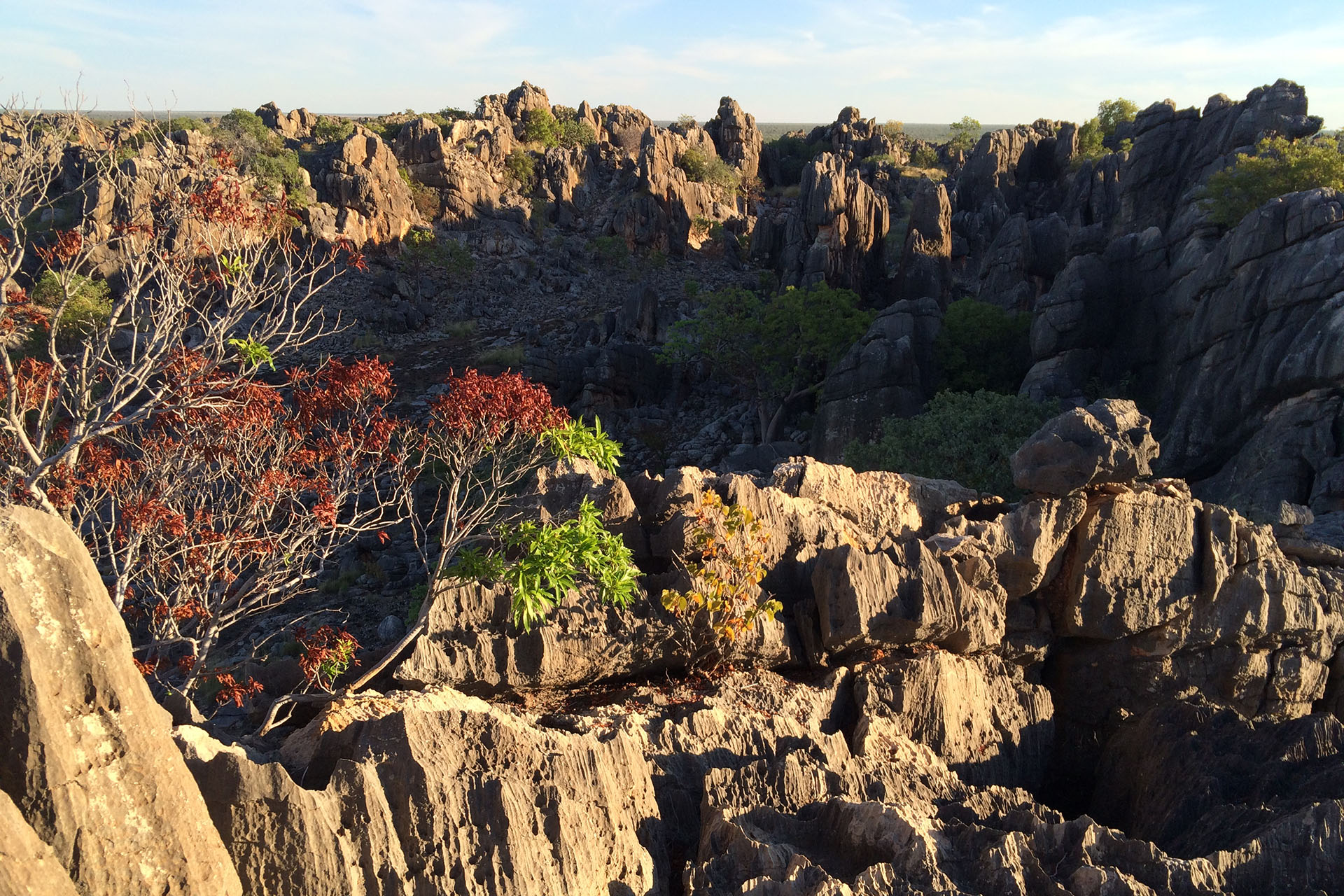 We climb down and make our way back to the camp. Like Alen, I'm a little subdued and nervous. At this moment, I want so much to end this lengthy trip and finish it some time later. The ultimate silence around us and the complete absence of civilization also get on my nerves. Then I find out that the front left tyre of the Tucson is almost bald: not comforting at all. Even the wild beauty of the jagged limestone and thick lonely boabs, along with a dark and starry night, can't really relax me. I go to sleep like this, tired and nervous, even more so when I hear a lonely dingo howl somewhere in the distance.