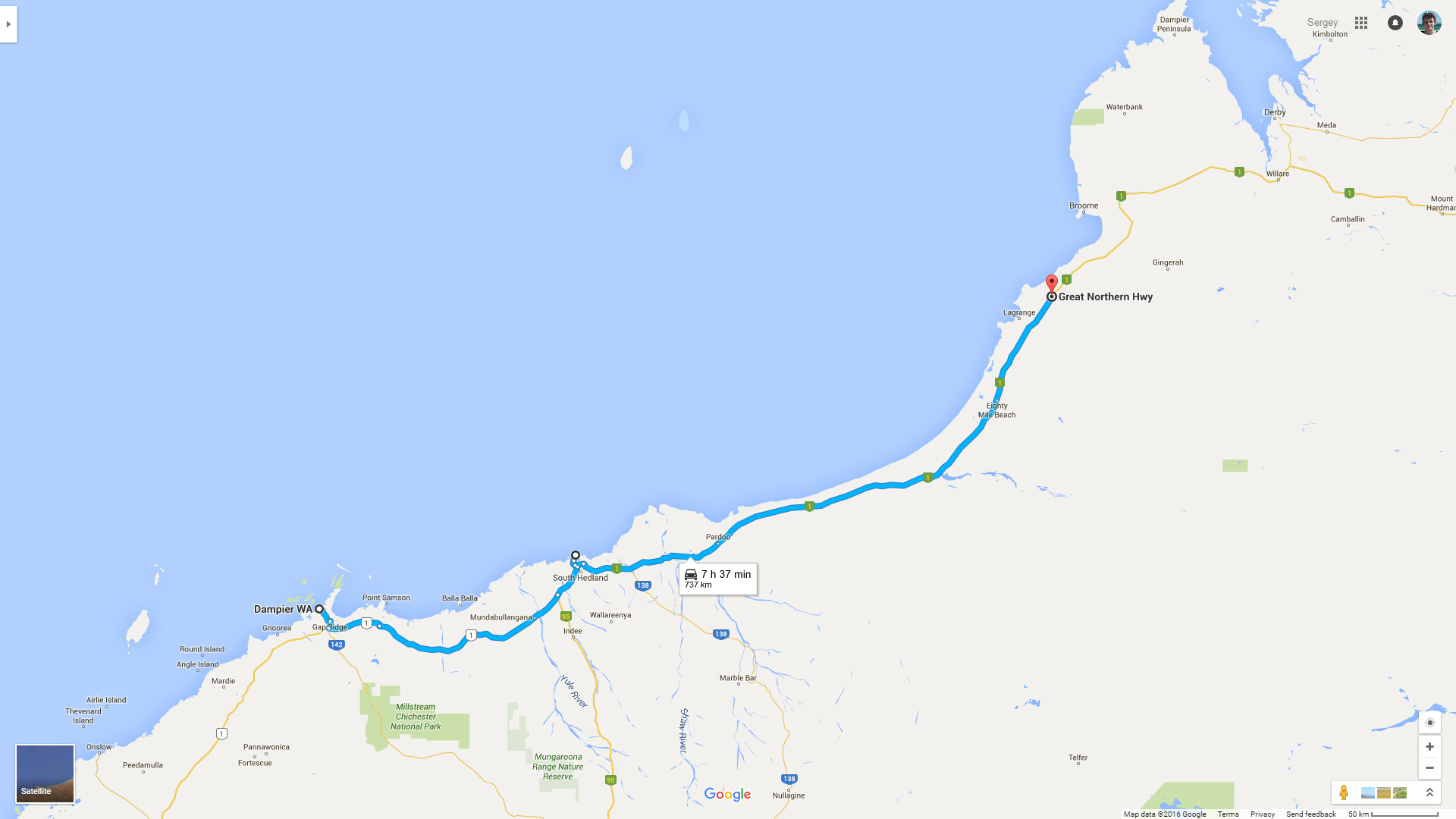 The night in the presence of cargo ships and busy waterfront brings no relief whatsoever. Too humid and too sweaty, and the street light two metres away doesn't help either. Is every night in these high latitudes going to be like this? Hopefully not.

We leave Dampier and Karratha early in the morning and drive further north-east. The closer we get to Port Hedland, the more we can feel the proximity of an enormous port: huge highway intersections, multiplying railways, dusty road trains with two and three trailers, and also numerous white utes with blinkers and antennas – owned, I guess, by the mining managerial staff. The red ancient desert looks at all this indifferently. A giant, blindingly white heap of salt is briefly seen on the right: this is also something they mine in these lands, along with many other things. 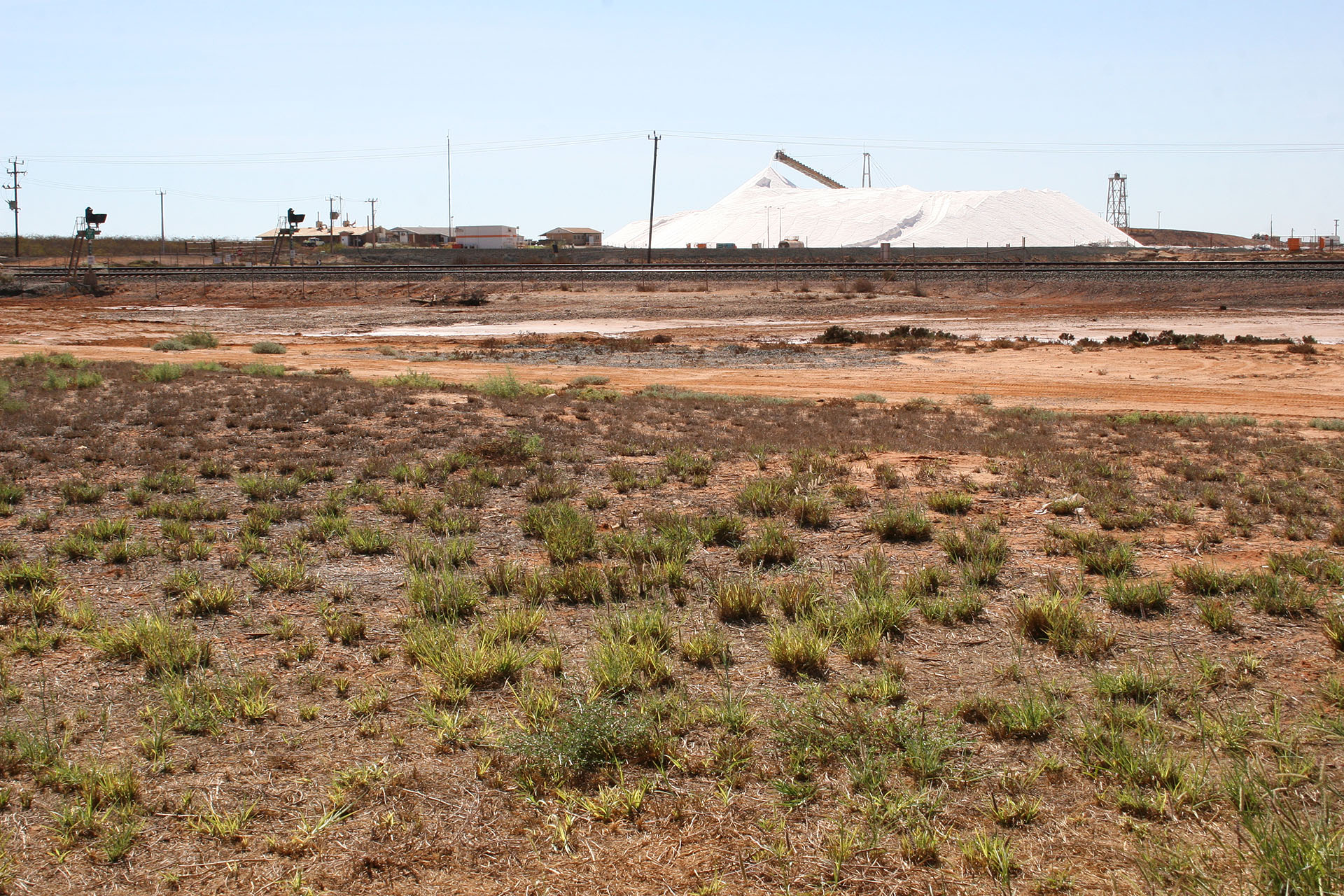 Finally we're in Port Hedland itself. The houses are bleak, but they're enormously expensive, each worth a million easy. That is because no one except miners and port workers live here, and also because there's very little land available for expansion: it's either busy with the port itself, or existing dwellings, or becomes flooded periodically during wet season. Not a single soul on the streets: everyone's at work.

We stop the car and take a walk in the park next to the port. Giant ships move along non-stop: the port works around the clock. Behind the sun-covered sea there is Indonesia, only 700 kilometres or so away: closer than Adelaide, as a matter of fact. Funny to think about it. 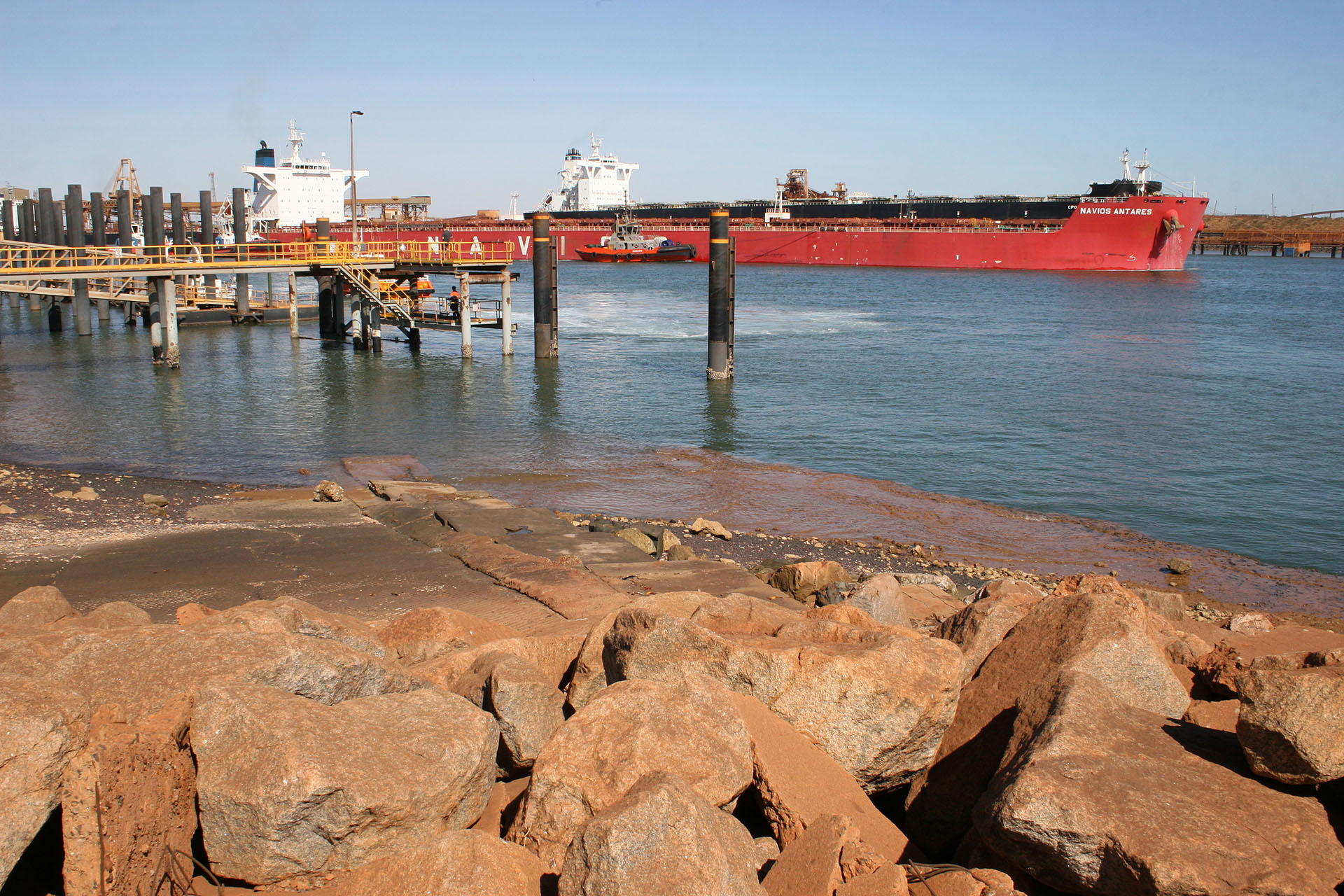 A few Aborigines sit on the grass nearby: they don't have to go to work. A peculiar lizard runs by us on its hind legs. As soon as it sees my camera, it quickly retreats to the bush, with its fore-legs flapping in the front, and I have to picture it in less than flattering circumstances. 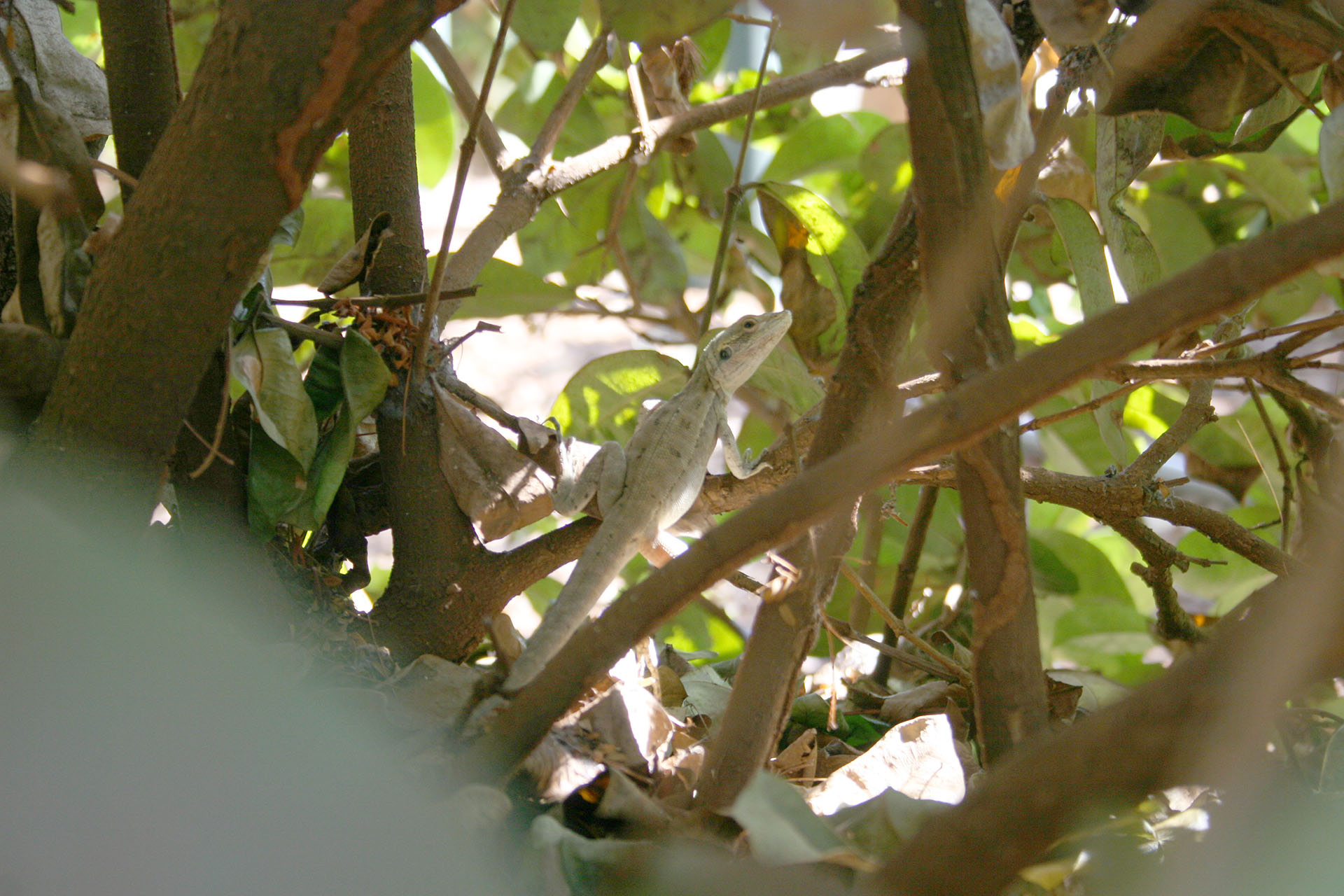 I don't do autographs today.

We also take a short walk along the surrounding streets. If Karratha looked much like a regular Aussie town, even with some ambition (their shopping centre is the largest in Pilbara), then Port Hedland looks more like a temporary dwelling for shift workers (which it is, to a certain extent). All buildings and streets have a gentle red tint on them: it's not dust, but rather something absorbed deep into the surface. Must be a tough gig to be a local cleaner. 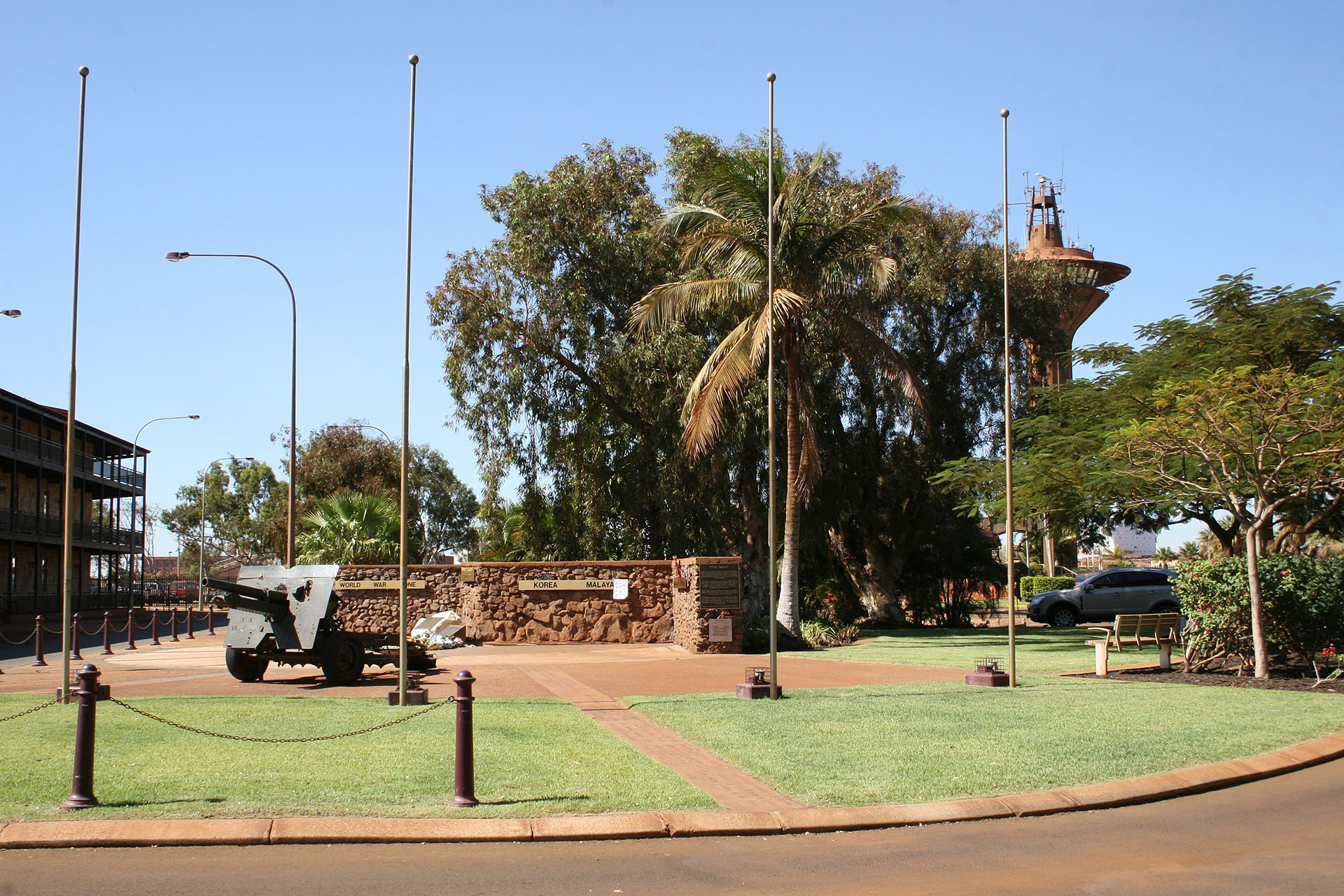 The main square. The reddish hue is clearly seen everywhere.

Finally, we leave this land of miners and port workers and drive on. Port Hedland is the only planned stop for today, the rest (if any) is going to be improvised. Somewhere around the area is the famous Millstream-Chichester National Park, but we don't go there: 150 km one way is too much of a detour. The landscape is changing slowly, and the Martian redness around us disappears. Alen is bored and sleeps in his passenger seat. The air con is on since 9 a.m., and I don't even think about turning it off: too hot outside.

We, however, make an unplanned stop after all. The Great Northern Highway comes quite close to the coastline sometimes, and soon we see a road sign with the Eighty Mile Beach name on it. I've no idea if it's really that long, but why not take a turn and check it out? Only a few kilometres of a heavily corrugated, sandy dirt track to take us there. 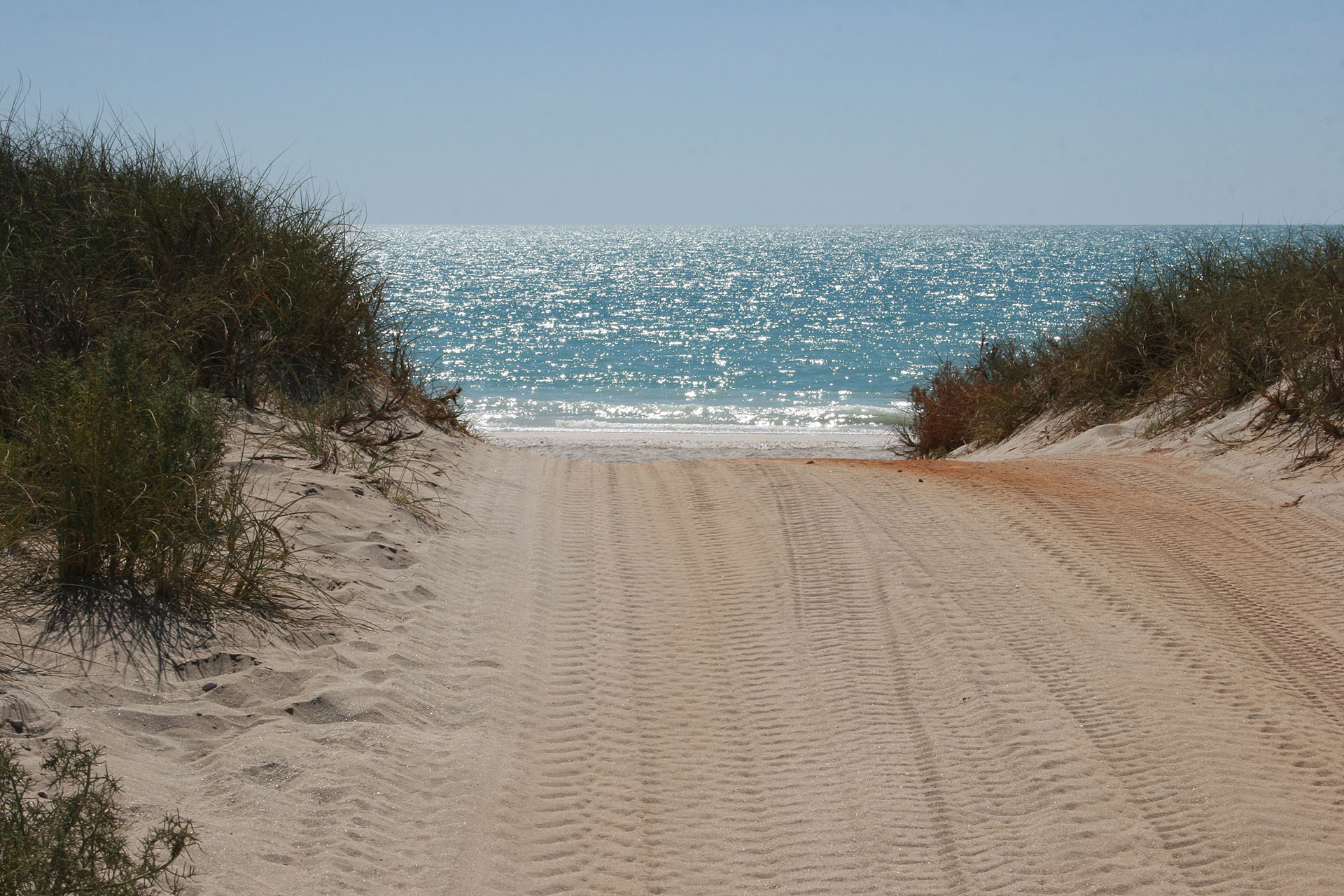 The beach is enormous indeed, covered throughout with a perfectly white, seashell sand. On this vast white stretch people look pathetic and tiny, like sandflies. Above the azure waves, an weird aircraft is flying back and forth: it looks like an odd cross between a helicopter and a canoe. (Only a few months later I'll find out that these things are called gyrocopters, or autogyros.) After a whole day of driving, there is a great temptation to take a swim in these inviting waves, but there are no showers around, and I know I'm going to regret it if I can't wash the salt off. We can't camp here either: this beach is a breeding ground for sea turtles, and their eggs can be damaged easily by our clumsy feet. Our budget can be damaged, too, if we stay here nonetheless and some vigilant ranger catches us. No other choice but to leave this lovely beach and move along. 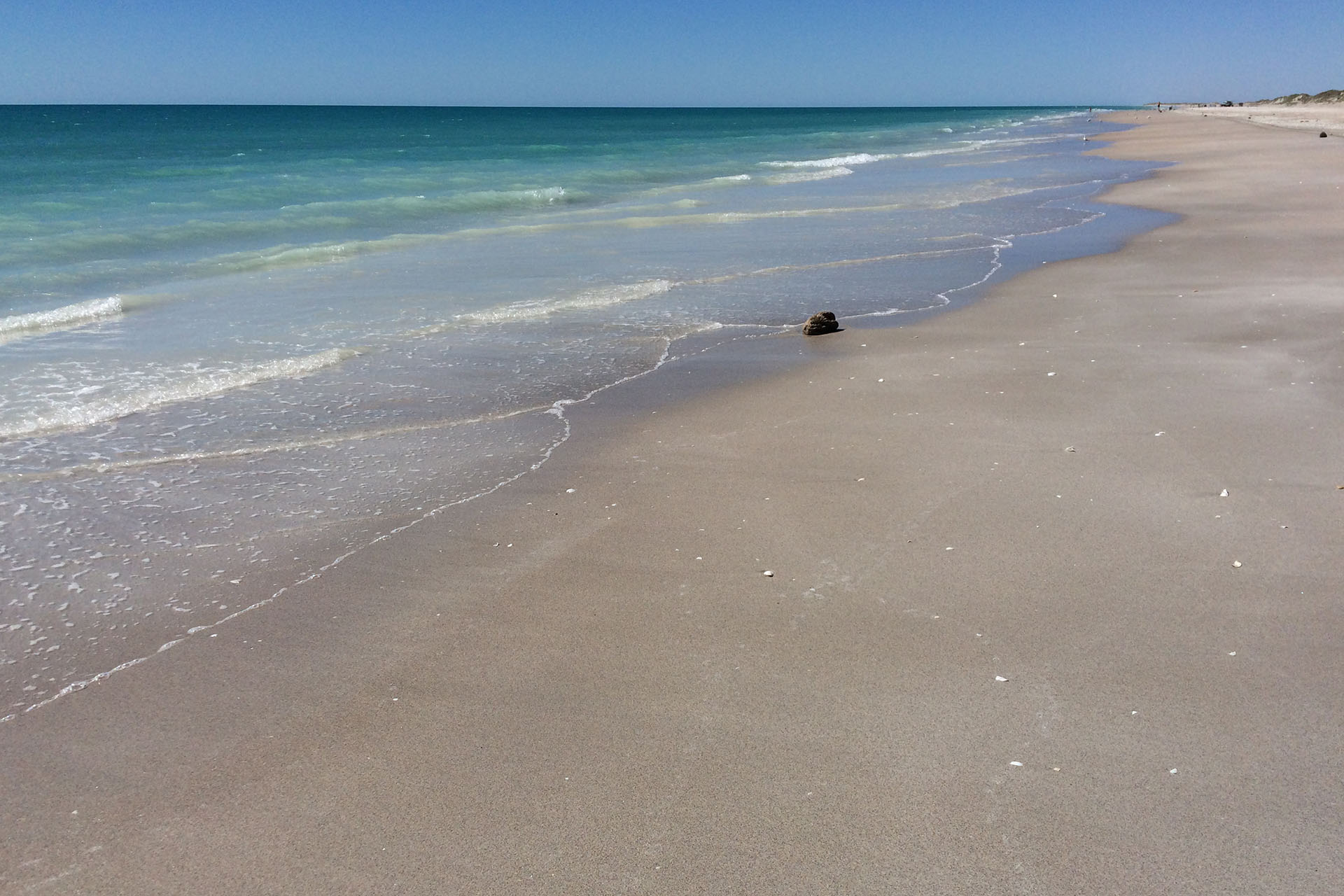 Half an hour later we stop at the Sandfire Roadhouse to refuel. The building is covered with all kinds of road signs, hopefully purchased and not stolen. A few peacocks roam around leisurely: local pets? 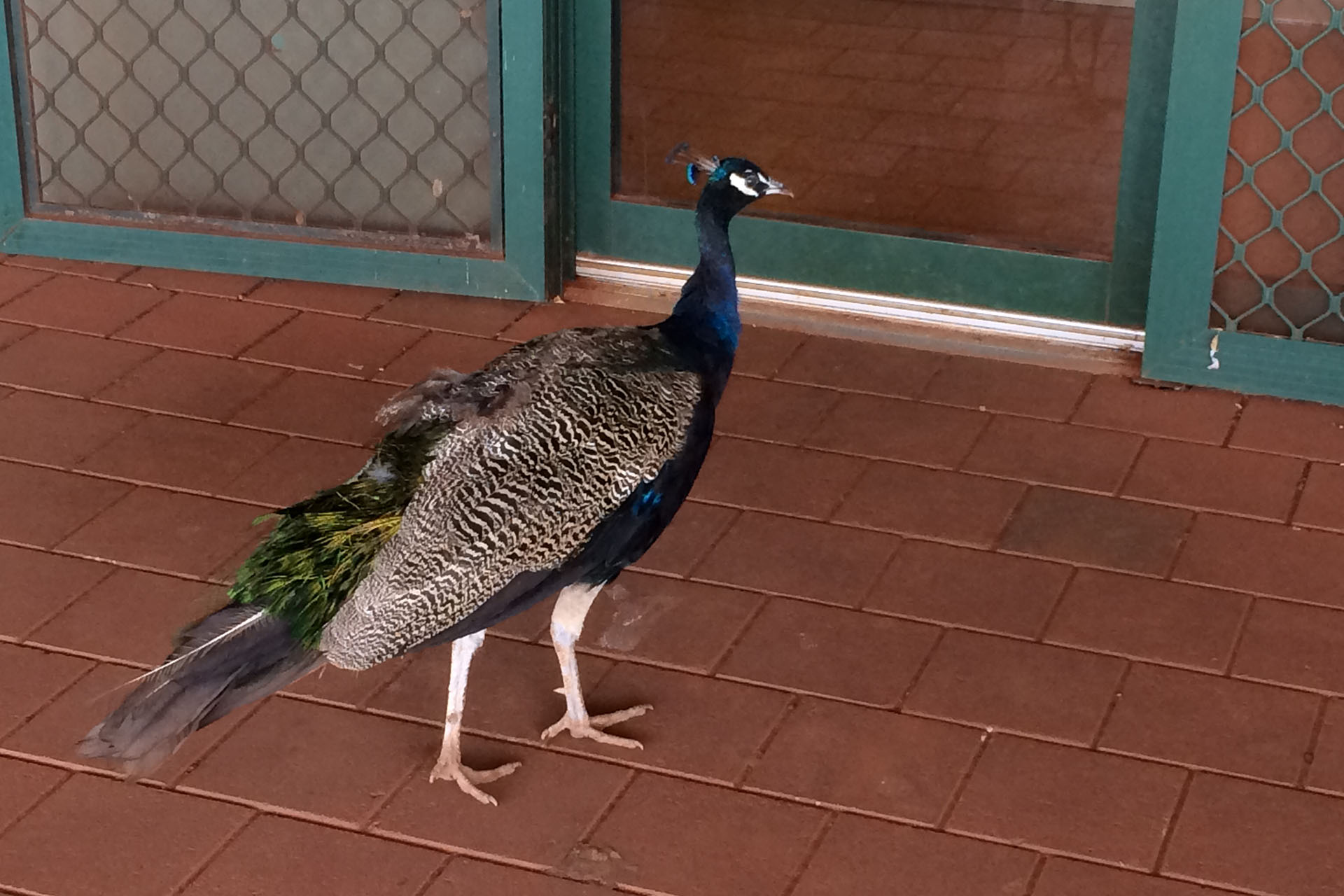 The peacock looks very much at home here.

And here are those gyros again! Evidently, they also need fuel.

We take off and drive further. Alen is asleep again, and I ruminate about the length of my journey and about the amount of time that will have to pass before I finally get back home. I know that these moments of weakness are the consequence of the bad night and the sensory overload of the previous days, but it doesn't make it easier. It's also unpleasantly tempting to think that I only have to take the next turn right to be back home in just a few days. Too big a temptation for a tired traveller. 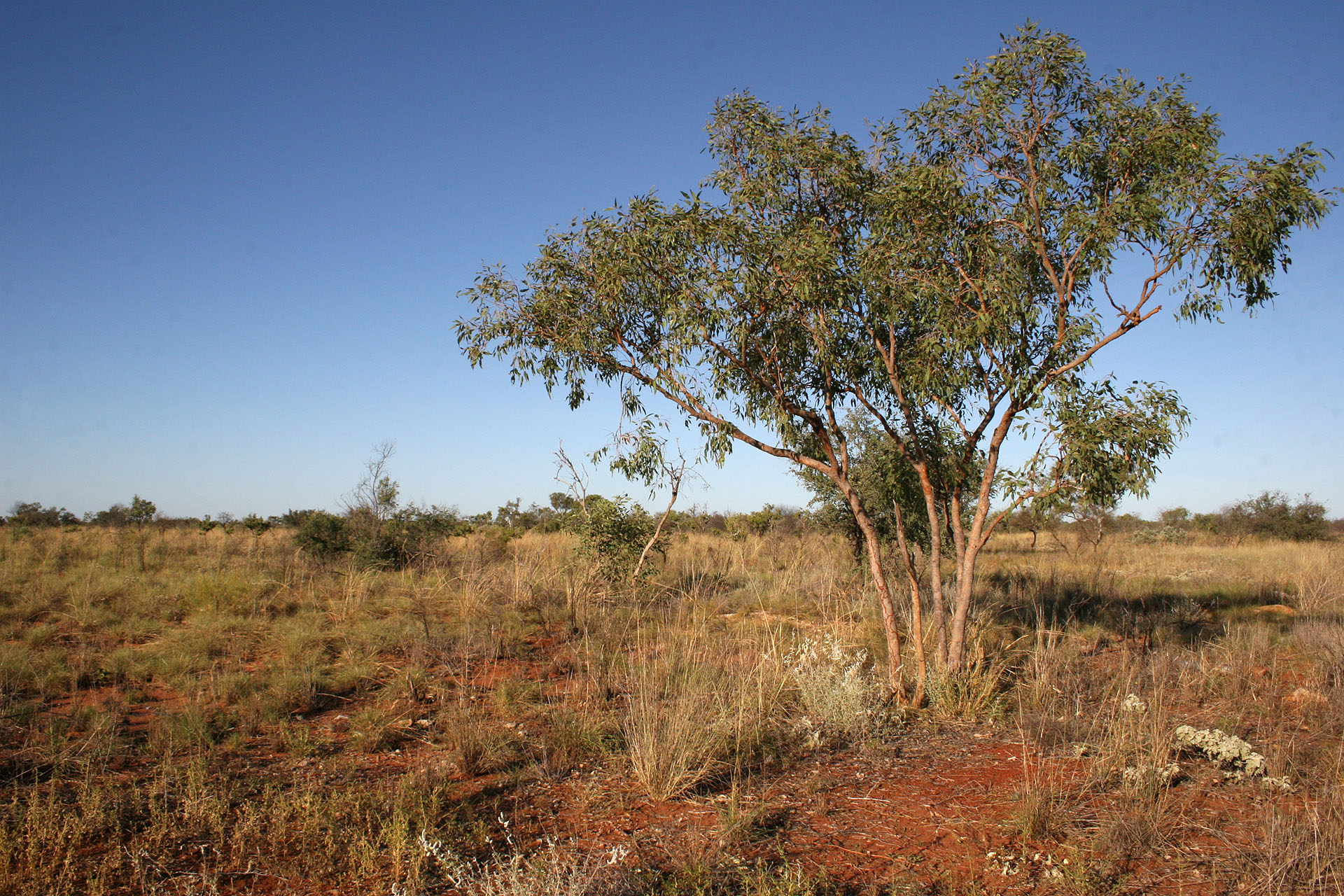 The desert landscape is not so deserted anymore.

Our journey for today ends at a 24 hour rest stop next to the highway. This one is specifically equipped for overnight stops: it has a toilet, a whole array of garbage bins, and even a few tables with benches. There's plenty of room for everyone, and a few camper vans here and there don't bother us at all. 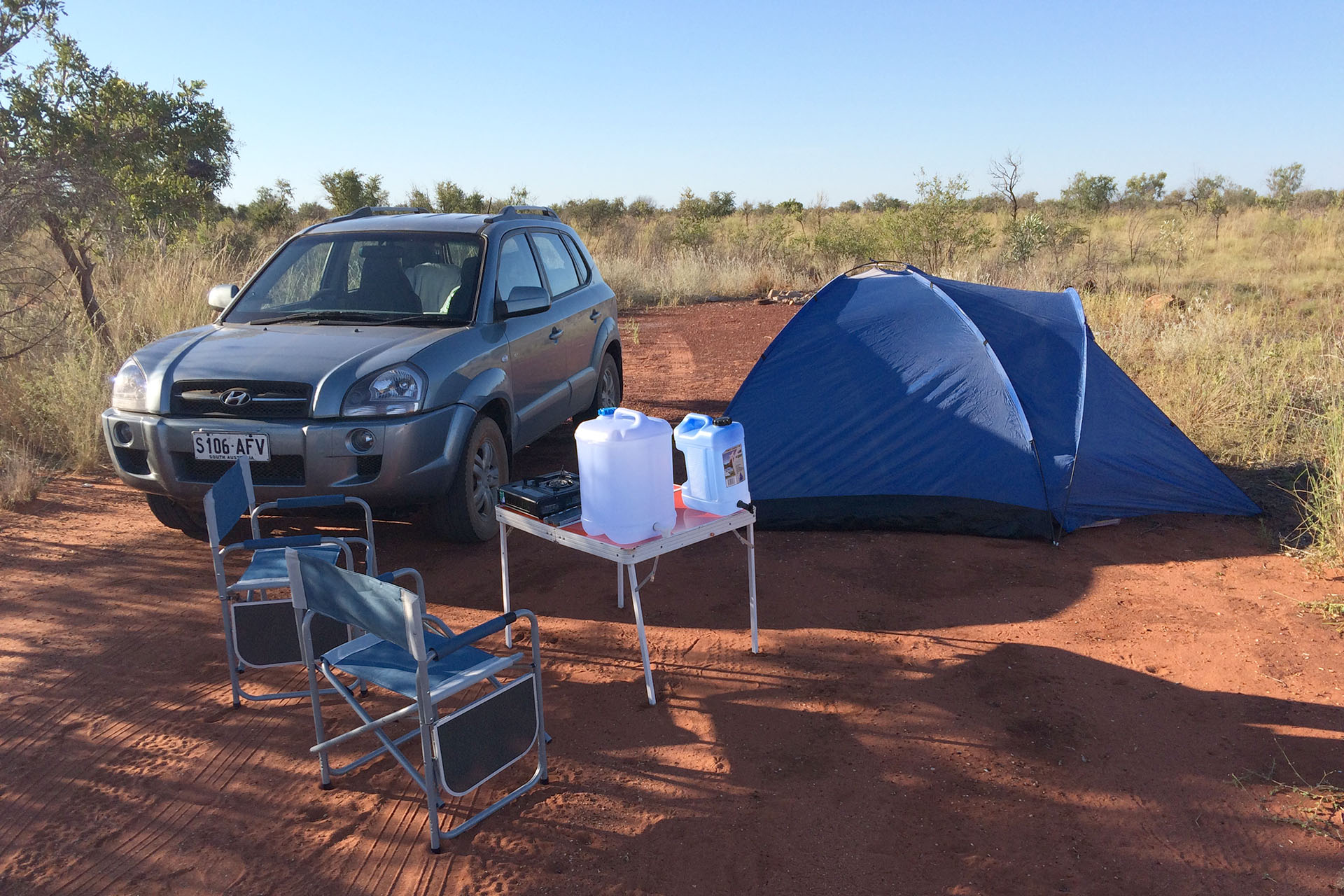 After all those caravan parks, this place is unusually quiet and completely free of charge. The air is quite dry here, too; even though there's plenty of inevitable sandflies, they disappear after dark. The moon sets quickly these days, and the clear dark night is full of stars. Looking at the spectacular galactic landscape, we discuss the fragile and fleeting human existence and try to find the Small Magellanic Cloud (to no success, even though the Large one is clearly visible). Finally, we give up and fall asleep in the tent, with the surrounding silence broken only by crickets and by some occasional vehicle on the night highway.