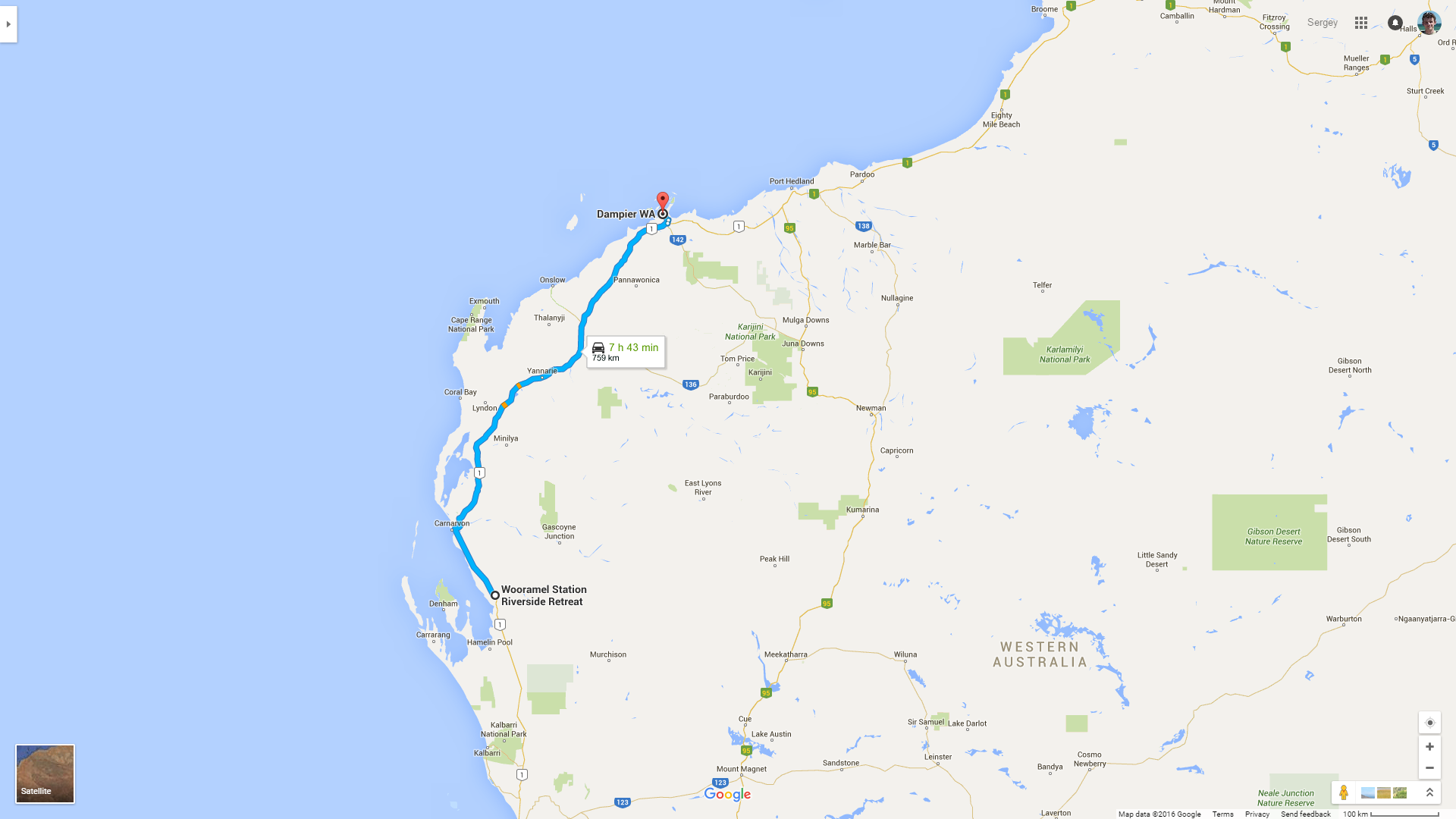 If down south, in Walpole, I could see my breath in the morning, and if in Geraldton it was around 18° at this time of day, then here it's already 27°. We move closer and closer to the northern heat with every kilometre. As the dawn breaks, the sandflies awaken too and begin to buzz annoyingly next to our faces. Are they really trying to bite us, or they just do it for fun? Avoiding them as much as we can, we have a quick breakfast, jump into the car and drive away.

Very soon we reach Carnarvon. Next to it there is an old parabolic antenna that NASA build in the 70s to track their satellites. NASA is now gone, but the antenna is still there, and the entrepreneurial dwellers of Carnarvon organized a space museum next to it (closed, unfortunately, at this early hour). 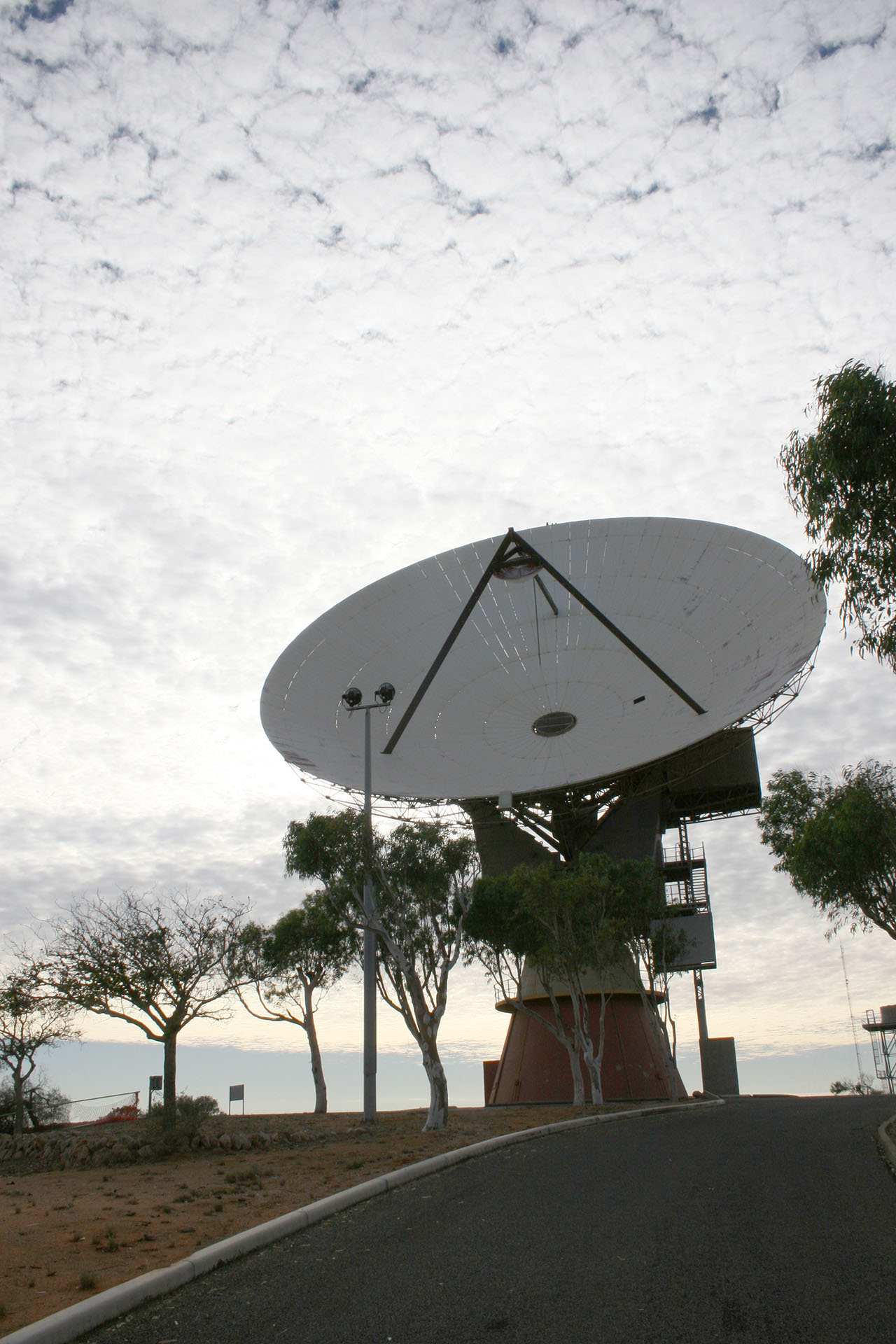 From where we stand beside the Dish, we can see the streets of Carnarvon far ahead (not too many of those: there's only 4,000 people there), and… banana and mango plantations. I had no idea they could grow them in these arid lands.

Not stopping in Carnarvon, we reach a T-intersection on its outskirts and turn right. The westernmost point of our journey is thereby reached; from here, the road will only take us to the east while still climbing northwards. Bananas and mangos disappear quickly, replaced by the same old bush and sand. Gradually the bush becomes lower, and the sand becomes redder. This is Pilbara: the land of hot deserts and numerous mines. 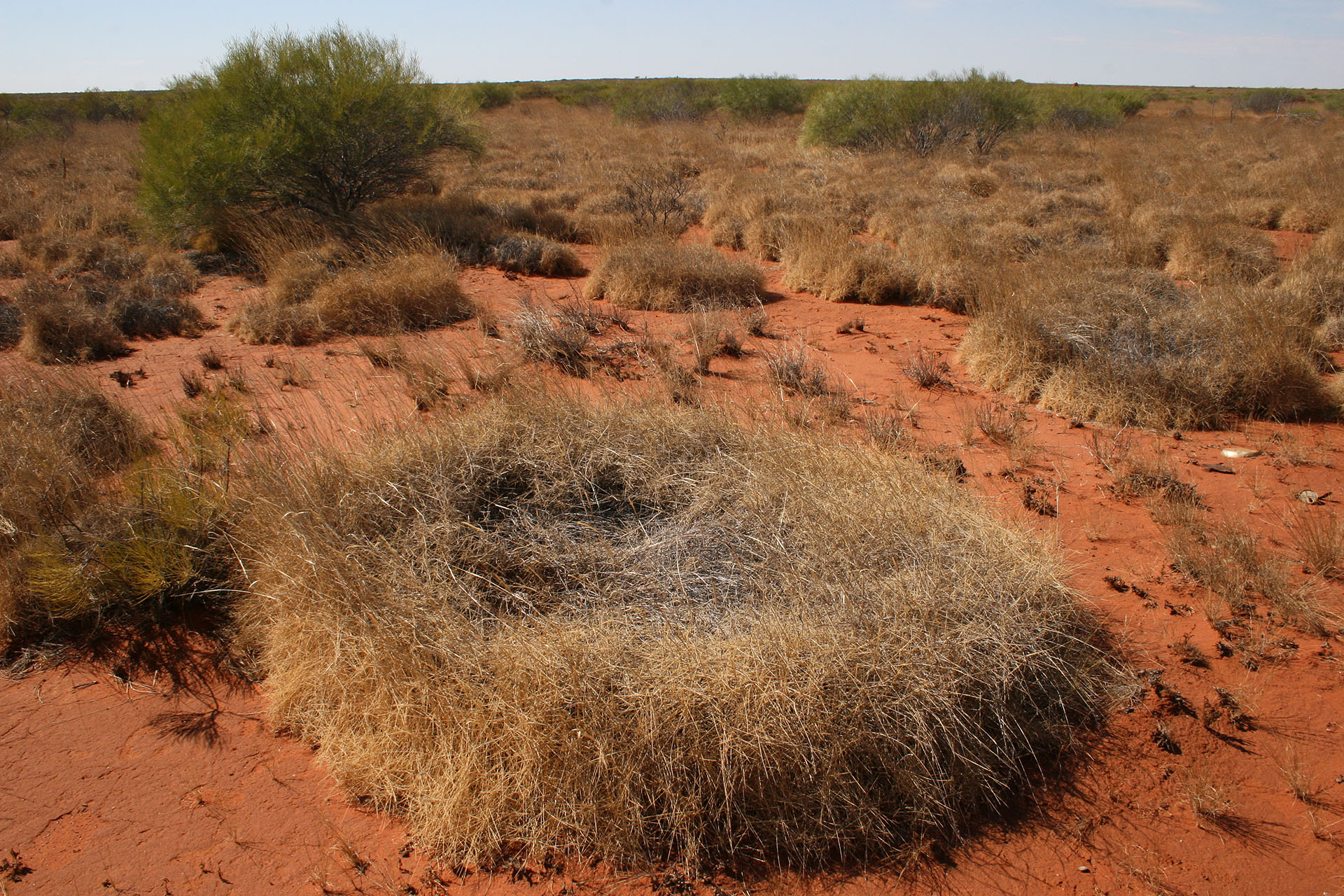 Dry grass is coiled into these circular shapes.

Soon we see the first termite mounds. Their shape is not aesthetically pleasing — most of all resembling fossilized dung of some huge, prehistoric animal — but somehow they look very cool nonetneless. As everywhere around here, during wet season these vast plains get flooded, so the poor termites have to build above ground. Their dwellings can take many different shapes, but so far we only see these dung-like mounds. 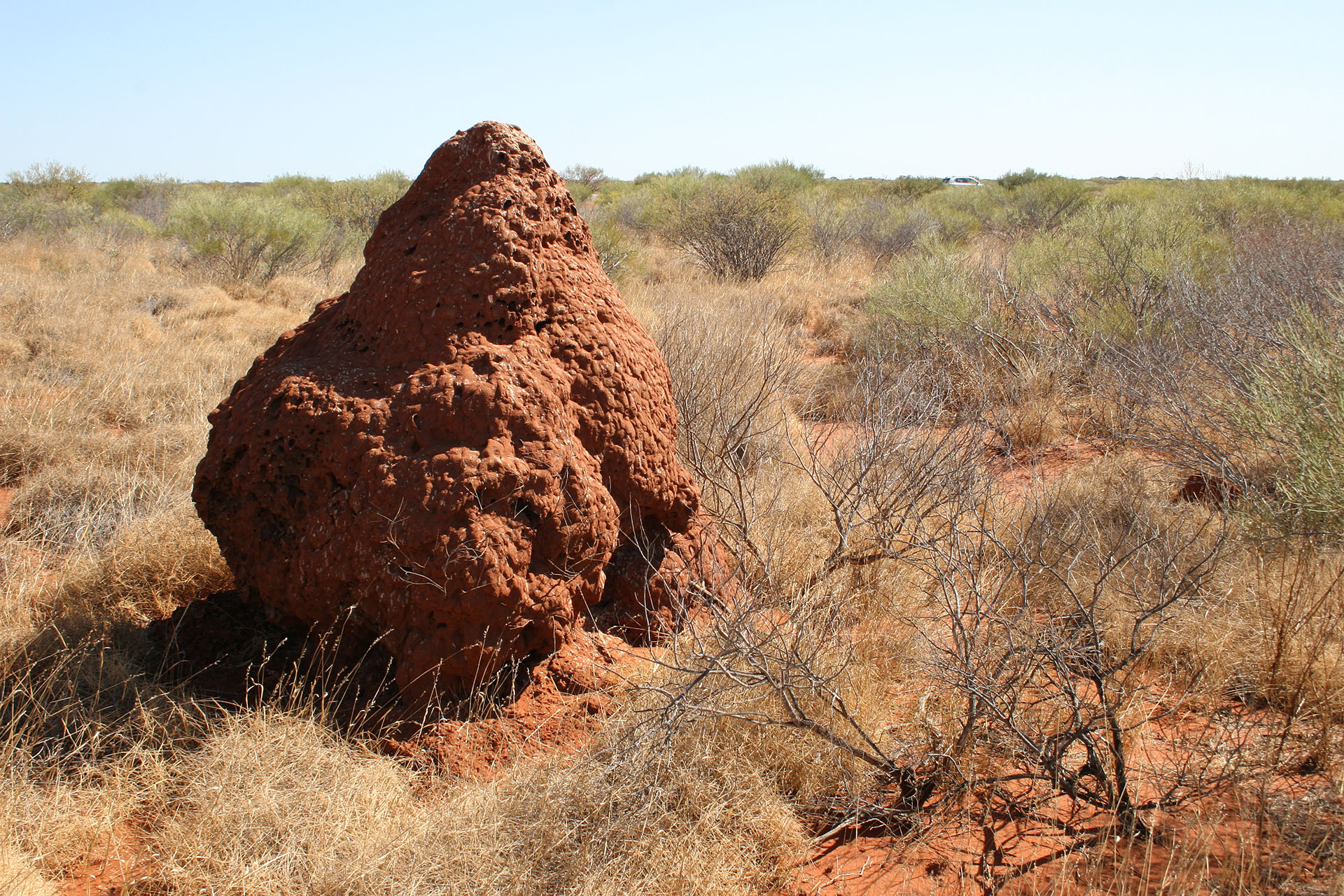 Can you see my Tucson?

Wet season, you say? Yes, the temperate climate is now behind us, and every minute now we should reach the famous Tropic of Capricorn. Instead of that, however, we enter the area of massive roadworks. Mile after mile of a bumpy dirt track next to the roadworks: behind all the dusty vehicles that travel in the same direction, while the other dusty vehicles, along with the dusty men in construction hats and fluorescent jackets, work under the scorching sun and make the highway better. The red desert stretches beyond us all as far as the eye can see. 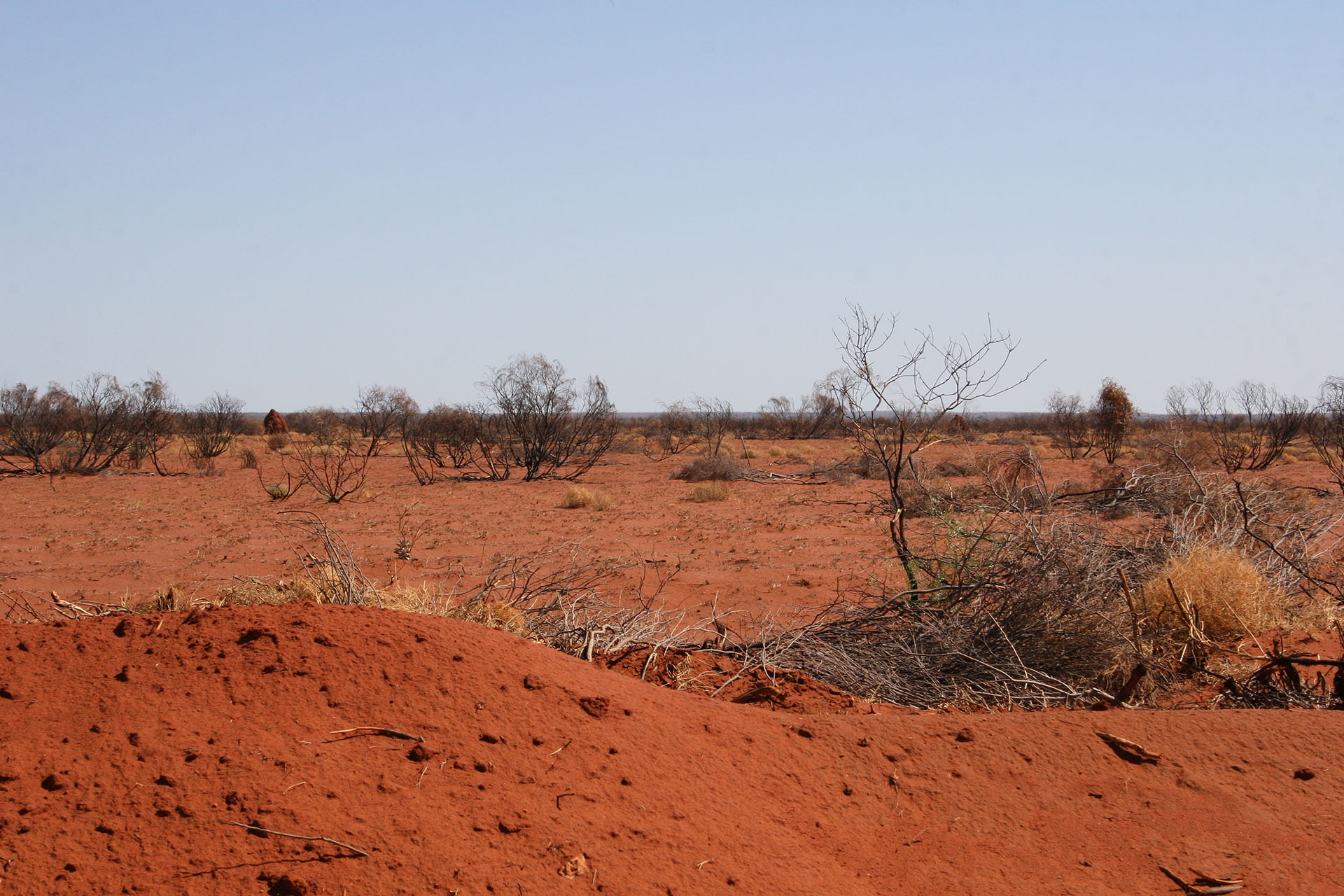 As we drag on like this, an odd incident occurs. A road train emerges ahead of us, and I take slightly to the right to see what's ahead. Suddenly the truck swerves to the right as well, blocking the view. A little later I repeat the manoeuvre… and again the truckie “blocks” us. After a while a plump woman in a fluorescent jacket and a construction hat, covered in red dust and tattoos, stops us and says that the driver complained about us on the radio, asking them to do something about the car that keeps trying to “overtake” him in the roadworks zone, where it is strictly prohibited. I laugh at this, but Alen gets riled up in an instant; and, as we continue to drag on behind the vigilant truckie, he continues to be very eloquent about the truckie in particular and all other too-vigilant-for-their-own-good people in general. When the roadworks zone finally ends, and when with enormous relief I finally overtake the truck, the driver bids us farewell by raising a middle finger. I can't see it from my seat, but Alen can, and he promptly returns the gesture. After that the journey goes on uninterrupted. 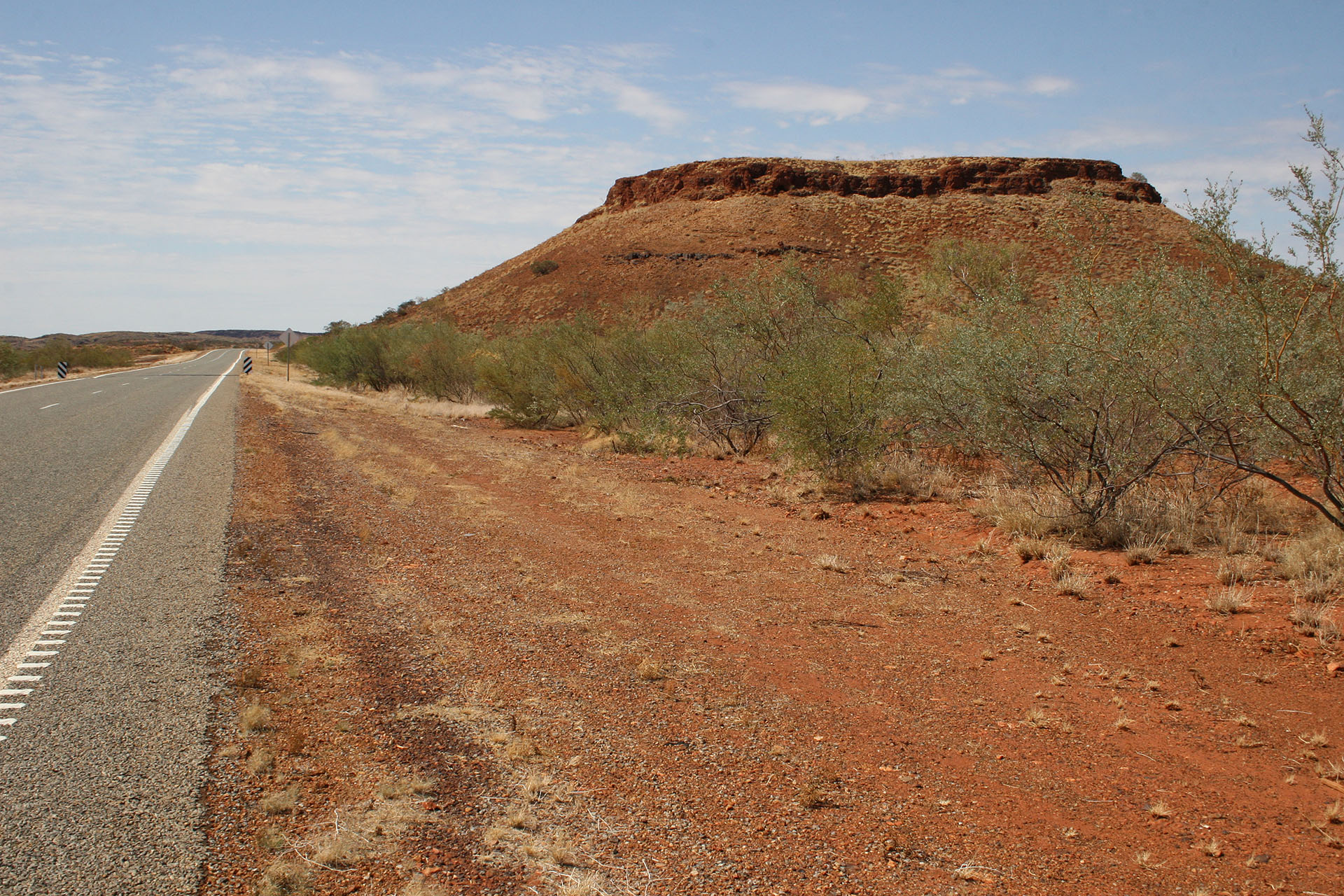 A “rumble strip” at the roadside can be seen, along with the cattle grid slightly further.

The desert outside is red and hot (+37°). Low, weathered, and half-crumbled mountains appear and disappear on the horizon. The region is ancient: this particular piece of Earth's crust is billions of years old. Perhaps these are indeed piles of dinosaur dung and not termite mounds. It's so easy to imagine the highway, the cars and the people disappearing very quickly, and the red desert with its dry, blackened twigs remaining just the same for billions of years more, until it is swallowed by the red giant Sun. 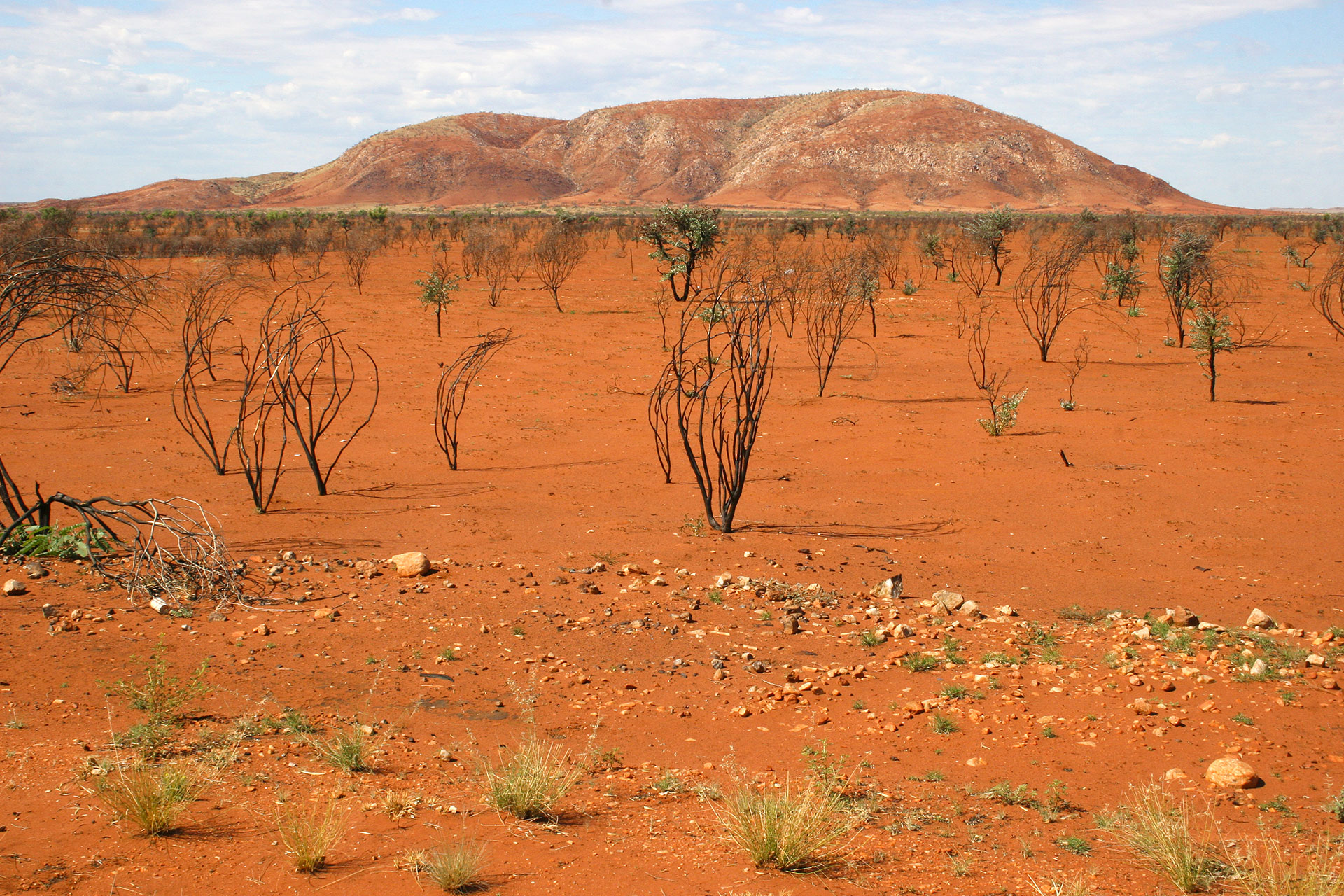 Pilbara in all its ancient glory.

We make a stop at the Nanutarra Roadhouse to grab a bite and refuel. Being the only civilized place for 200 kilometres around, it's quite busy. I eat my steak with chips and watch a Timorese girl who walks around between the tables: it's very obvious that she wears nothing under her skimpy dress except the black lacy bra. After a week of tents and empty roads, such encounters make very lasting impressions indeed.

Finally we reach the today's destination: Karratha. Muggy heat envelops us as soon as we step out of the car. Next to the brand-new buildings of the giant shopping centre, elegant coconut palms gently sway back and forth. Tropics! We enter the shopping centre, where I buy two new folding chairs instead of the old ones which got ruined completely. Also, I buy myself a tiny bottle of shampoo: I forgot the previous one in Walpole. From Karratha we drive towards Dampier, its satellite town, where we camp in the local caravan park. 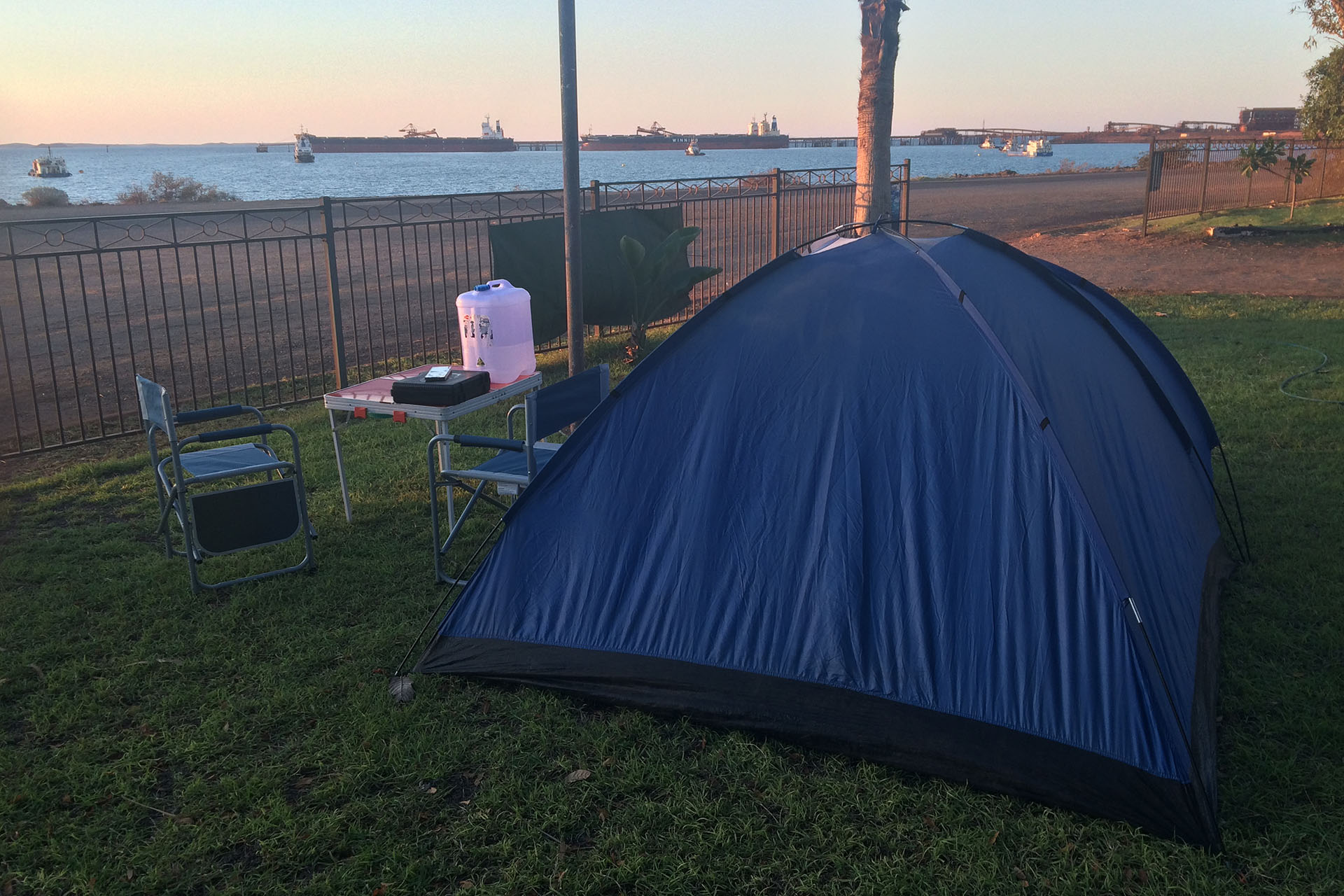 The view of the Dampier waterfront is a bonus.

Karratha is a major hub for the local oil and gas industry, and the Dampier port is the place where it all starts to travel all over the world. The port is enormous and is only second to Port Hedland, which is not too far away and which we will see no later than tomorrow.

The park's manager is very hospitable and tells us all about the local sights; but when we find out that the closest one is 18 kilometres away, we lose interest quickly. Their local drinking water, however, interests us very much, because we're running out of our own. We refill the jugs and go to bed. Still hot and humid, even after dark. I don't even think about getting into the sleeping bag; even lying on top of it is sweaty enough. Tropics, indeed. Well, at least there are no sandflies around.