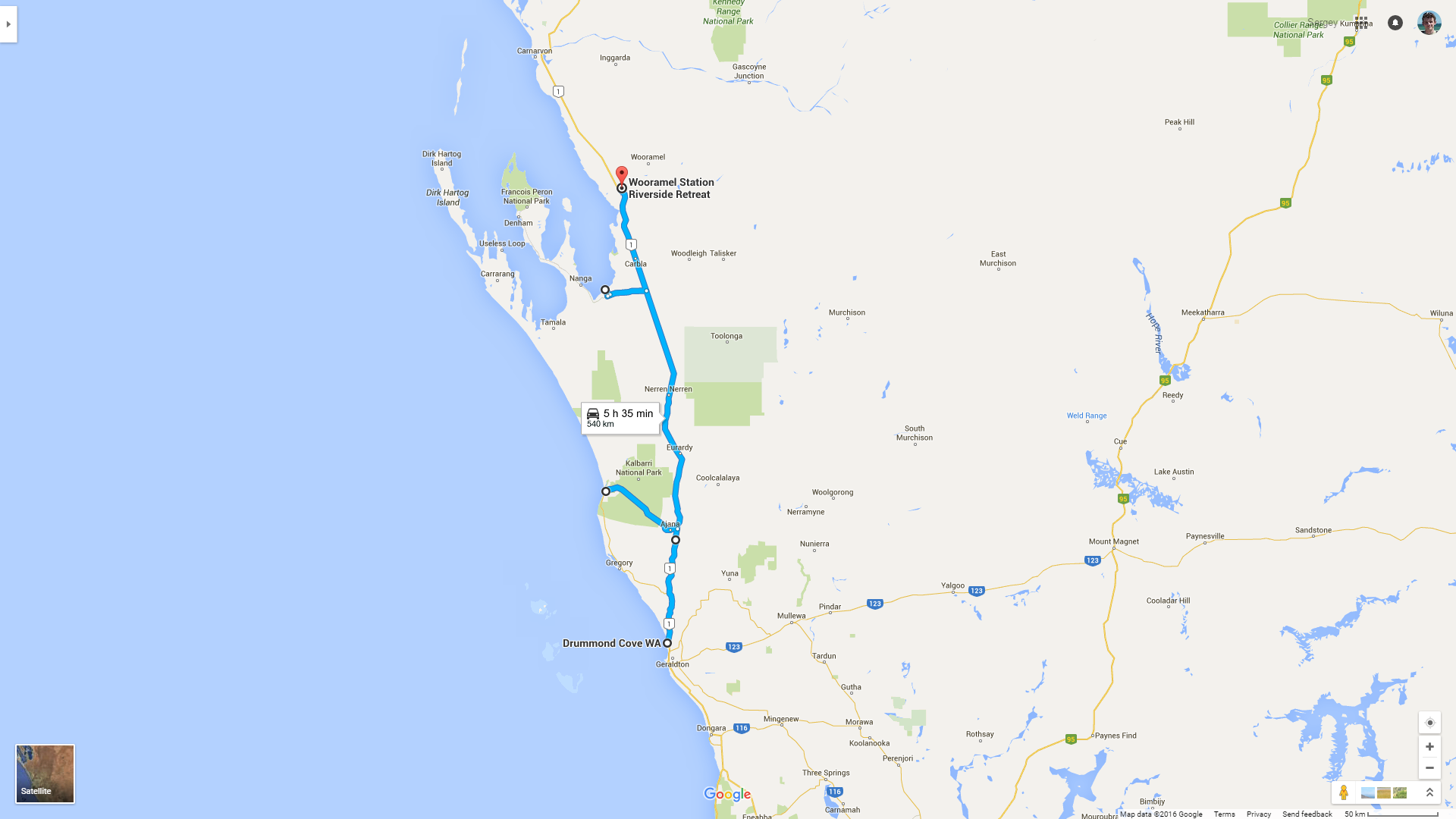 The night is warm and quiet, and the sleep is great; when we wake up, we are greeted by numerous birds in the aviary nearby: just a patch of grass surrounded by a mesh fence with perches and troughs, a perfect place for dozens of parrots, canaries and other colourful creatures. After having our breakfast and packing up our camp (feels a bit odd when two people now do it instead of just one), we take off.

No huge forests and European farms anymore. The landscape is becoming more and more desert-like, with yellow sandy soil under numerous hummocks and bushes. After a while we take a turn left and make a 50 kilometre detour towards the Kalbarri National Park. Along the road there are funny-looking trees with odd flowers – fluffy and pinkish-orange, pointing straight up – but somehow we don't stop to make a picture.

A dirt track takes us to the park itself. The track is badly corrugated, but I manage to do 80 km/h in places nonetheless. It's still morning, but when we arrive it's already quite hot. Sightseeing time again! 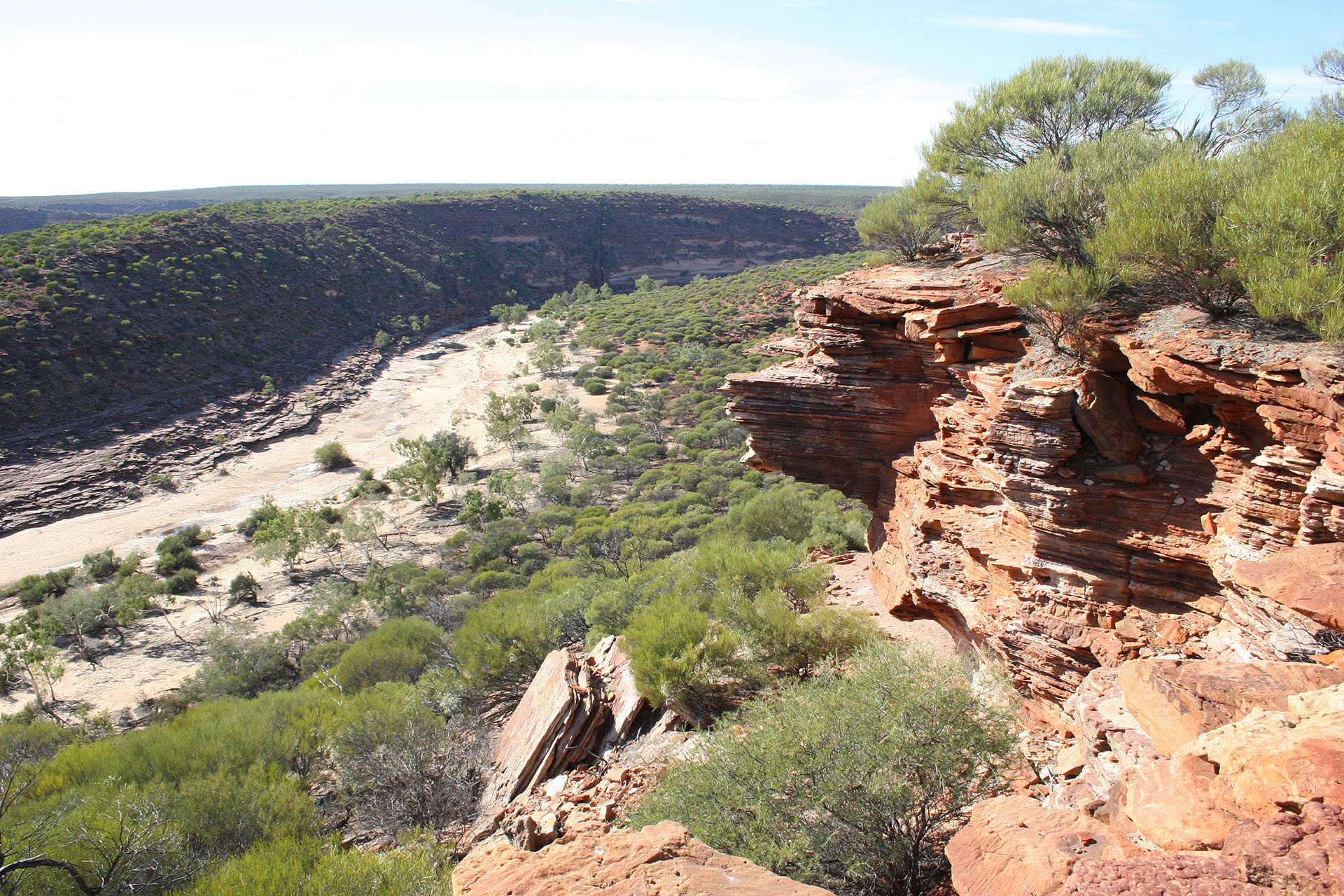 Murchison River is all but dry. 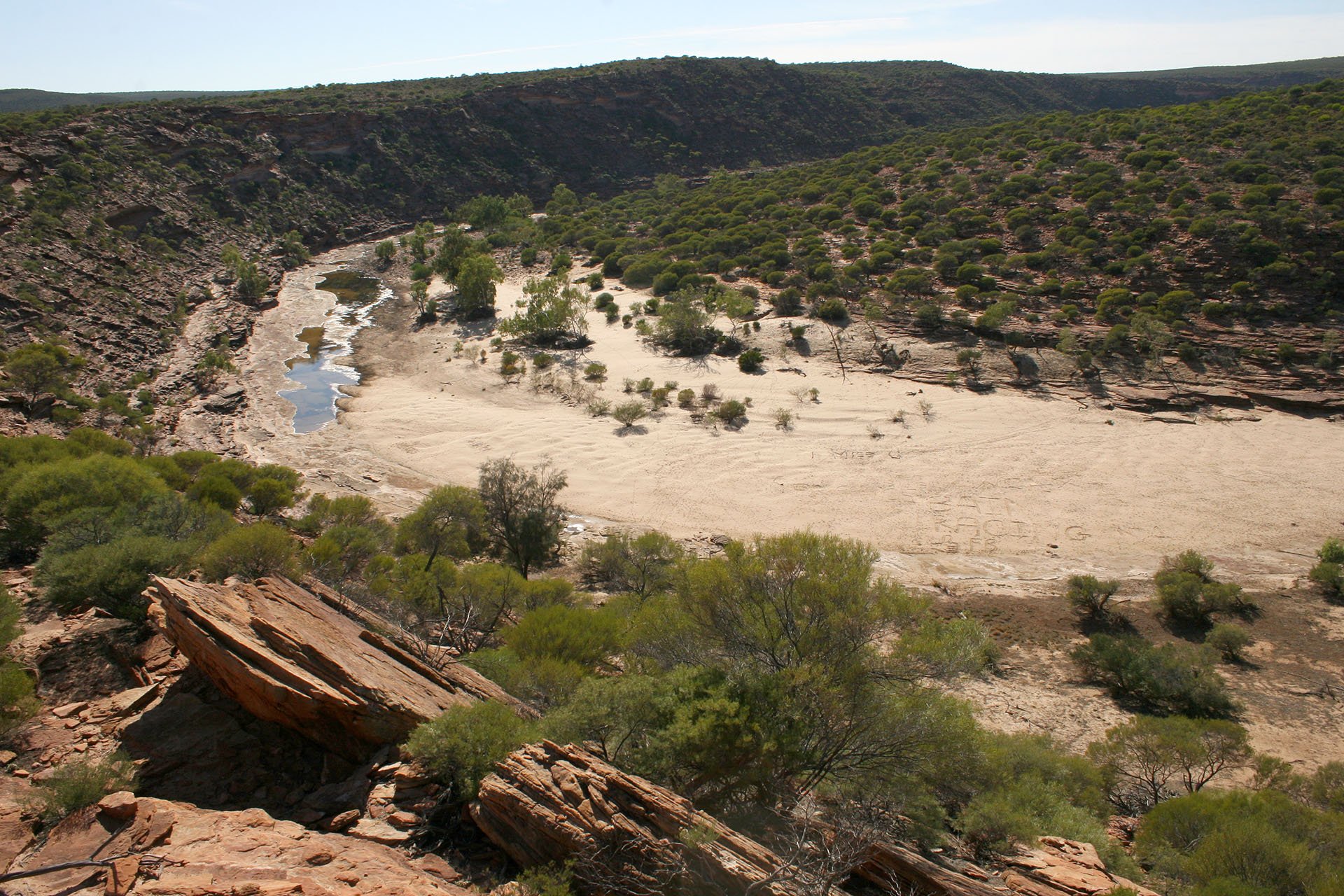 Something's still left from the river, though.

The Murchison River does not exist at this time of year; only its sandy bed glistens at the bottom of the valley. Sandflies swarm around our heads, irritating Alen enormously. All the other tourists (plenty of them, even at this early hour) are also waving the insects off desperately. The surrounding scenery, however, is majestic and quiet despite all that. 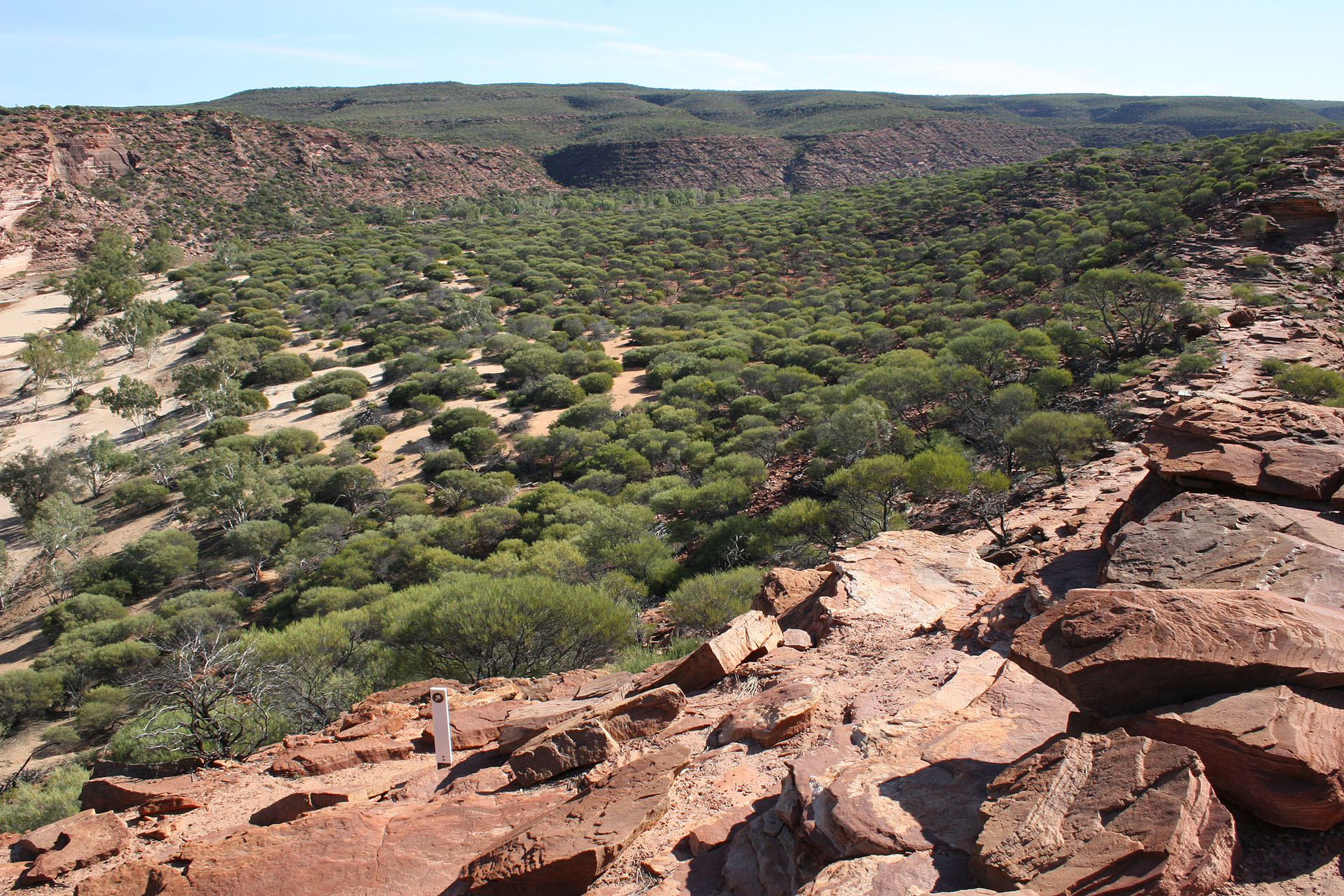 The other side of the hill.

The path is surprisingly short, leading us the the main local attraction: a big chunk of layered sandstone with a hole in the middle of it, proudly presented as “The Nature's Window”. Next to the Window tourists swarm like sandflies, taking endless pictures and selfies, and all this frenetic activity irritates me and Alen more than the flies themselves. Finally I manage to take a picture of the rock without any people in it, and after that, cursing the people and the flies and the weekends, we get back to the car and head out of the park. Nothing else here for us. 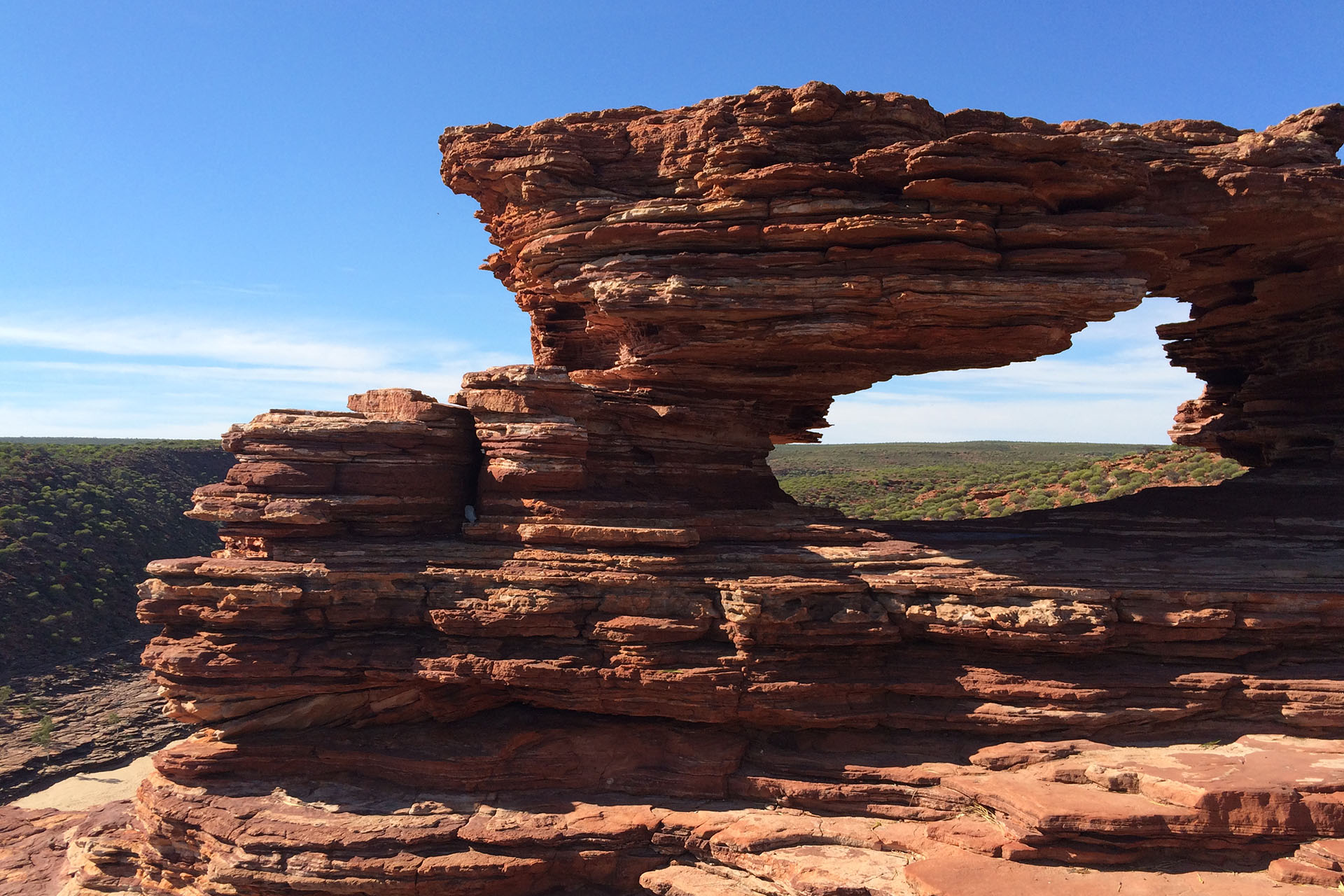 Because we're here anyway, we decide to reach Kalbarri itself, which is a small coastal town. We buy some fuel and supplies there, also meeting the Indian Ocean once again. 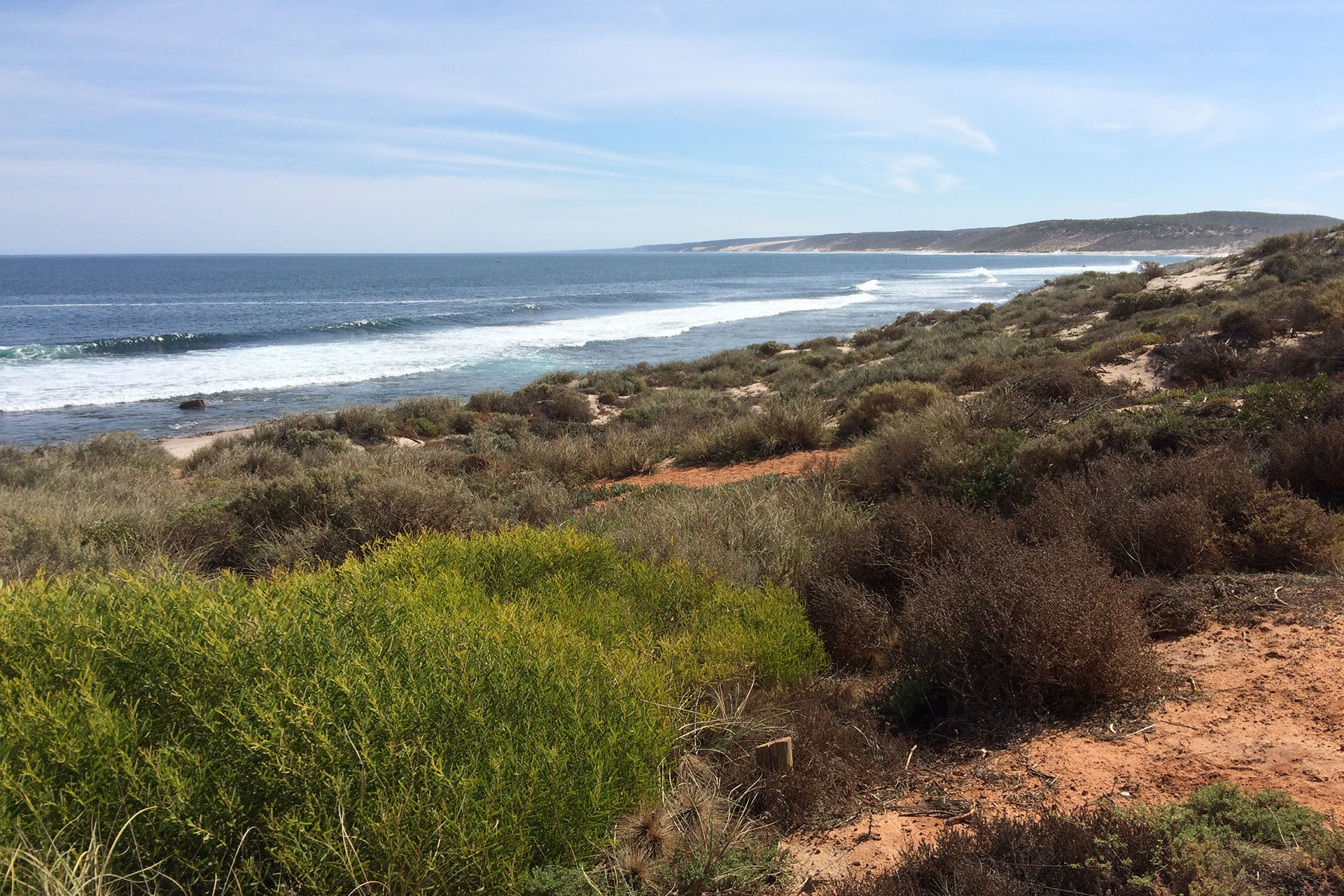 Then another 60 km back towards the highway – and we continue our journey north. The landscape is still sandy and desolate; only the sand colour changes regularly, from yellow to red and then back to yellow. The region reminds me of the Nullarbor a lot. A few hours later we take another turn left, to the Hamelin Pool this time. It is known to be the perfect place to look at stromatolites, which is exactly what I'm planning to do. 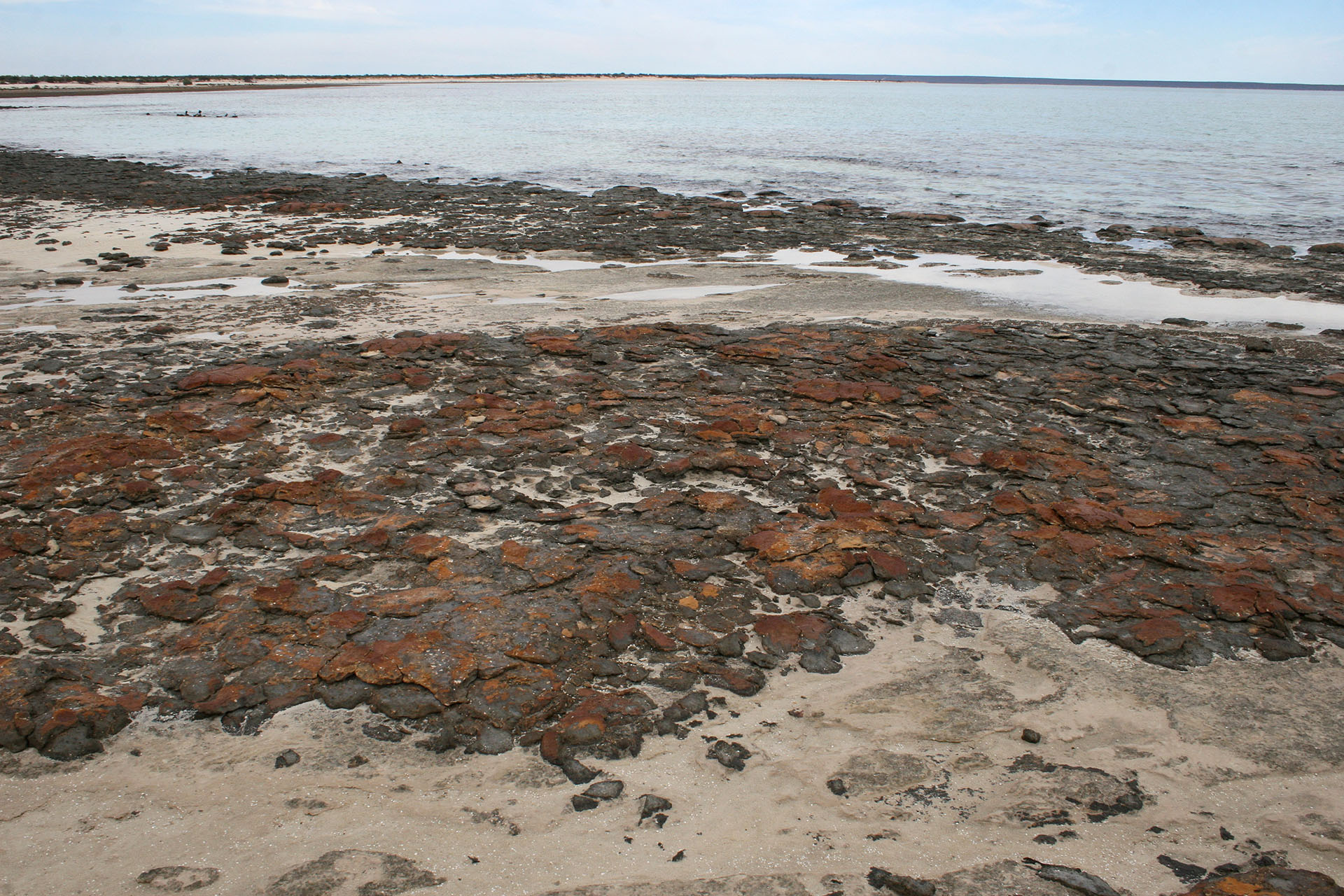 Stromatolites on the tidal coast.

As we all know, stromatolites are photosynthetic bacteria who live in colonies and leave behind their fossilized remnants, upon which another families of bacteria thrive. These rock-like remnants, growing slowly with every passing year, are called stromatolites. These bacteria can only live here because the water in the bay is shallow and extremely saline: no one else can be endure it except them. They are still young on a geological scale, and there are much older stromatolites deep inside the continent: billions of years old, and enormously huge. There's plenty of tourists here as well, and as we finish looking at the fossilized bacteria, we leave them (and tourists) as quickly as possible. 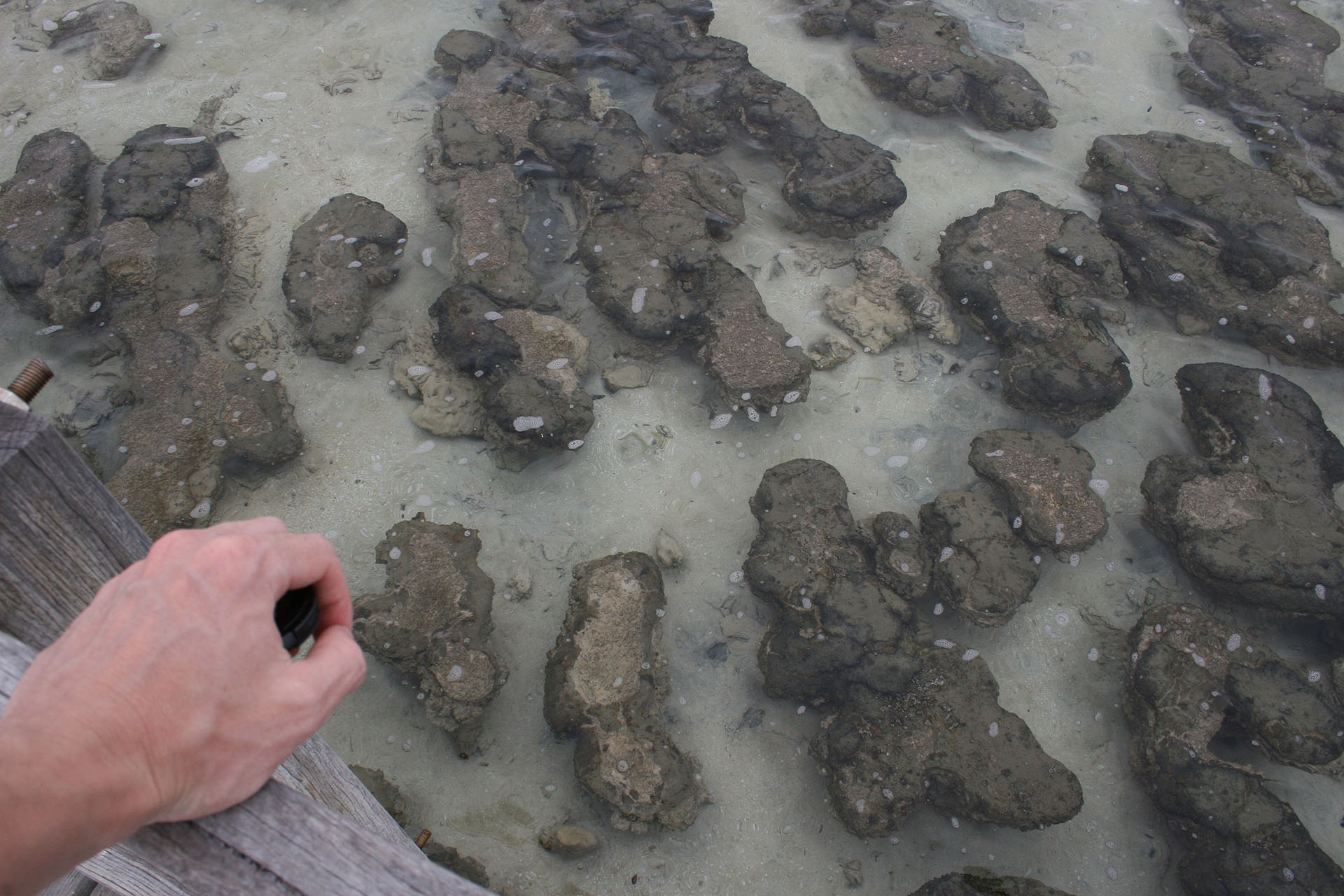 More stromatolites in the sea water.

If you travel a hundred kilometers more to the west from here, you can visit the Steep Point: the westernmost end of the Australian mainland. We, however, are quite sure that it's not going to worth it: too far off the highway, and the road is not sealed anyway. Plenty of dirt tracks in the days to come, so we'd be better off conserving energy and saving the vehicle's resource.

Driving further north, we finally arrive at the Wooramel station, where we stop for the night. A station in Australia is an enormous block of land used for breeding cattle, and some of the owners let people camp on the territory. The station's buildings are situated on the river bank, and the river (just like Murchison earlier today) is bone-dry as well. Its sandy bed is covered by numerous tracks, mostly from the cows. 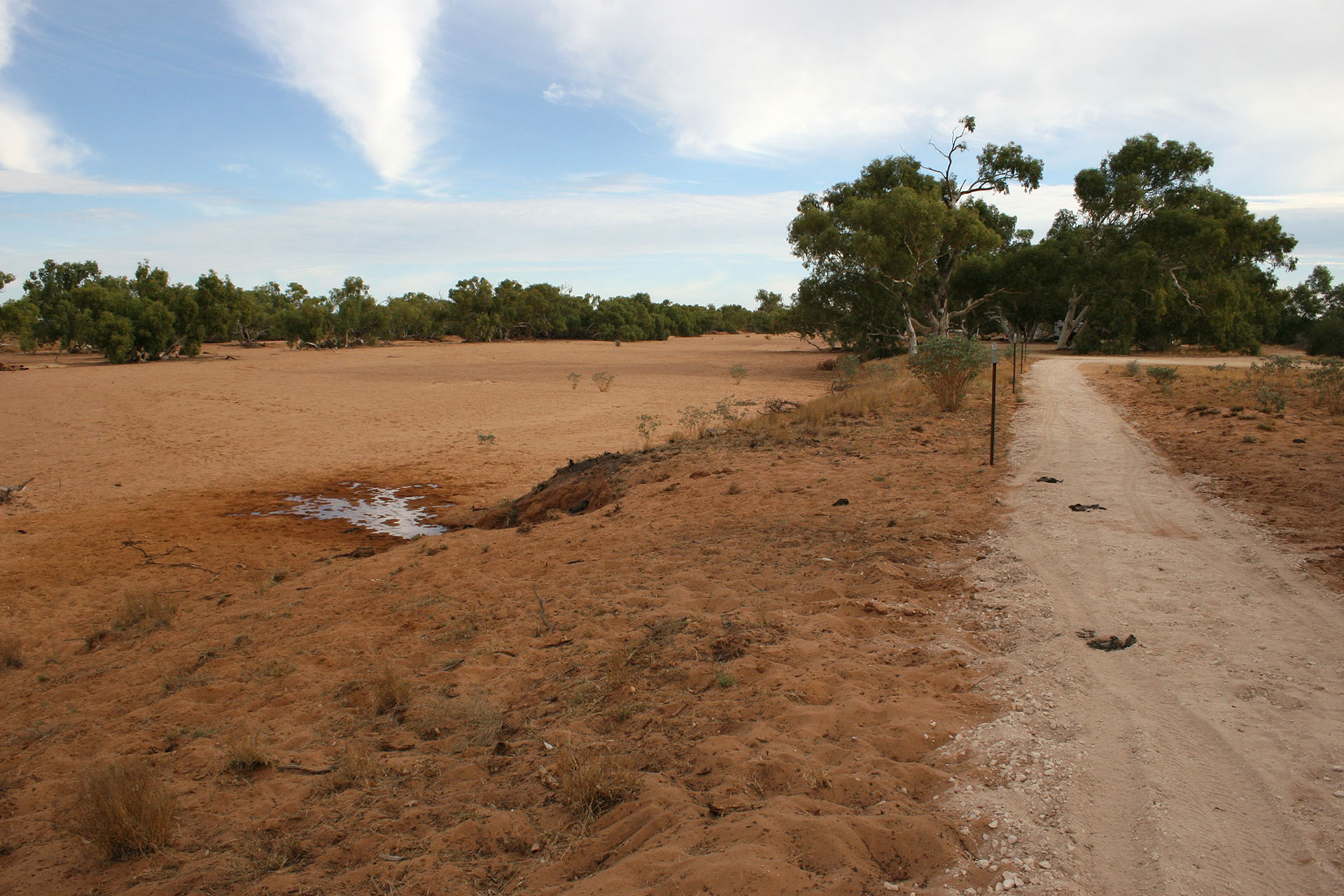 No river here either.

If someone still wants to have a bath though, there is a spa. That's right. The owners gave this proud name to a couple of steel bowls dug into the ground and filled by hot artesian water. The water is indeed artesian, indeed hot (about 40°), and has a noticeably metallic taste. You can't drink it, but you can certainly bathe in it. The rest of the station outside the “spa” is typical Australian outback: dried vegetation, a windmill, lots of space and lots of cows. 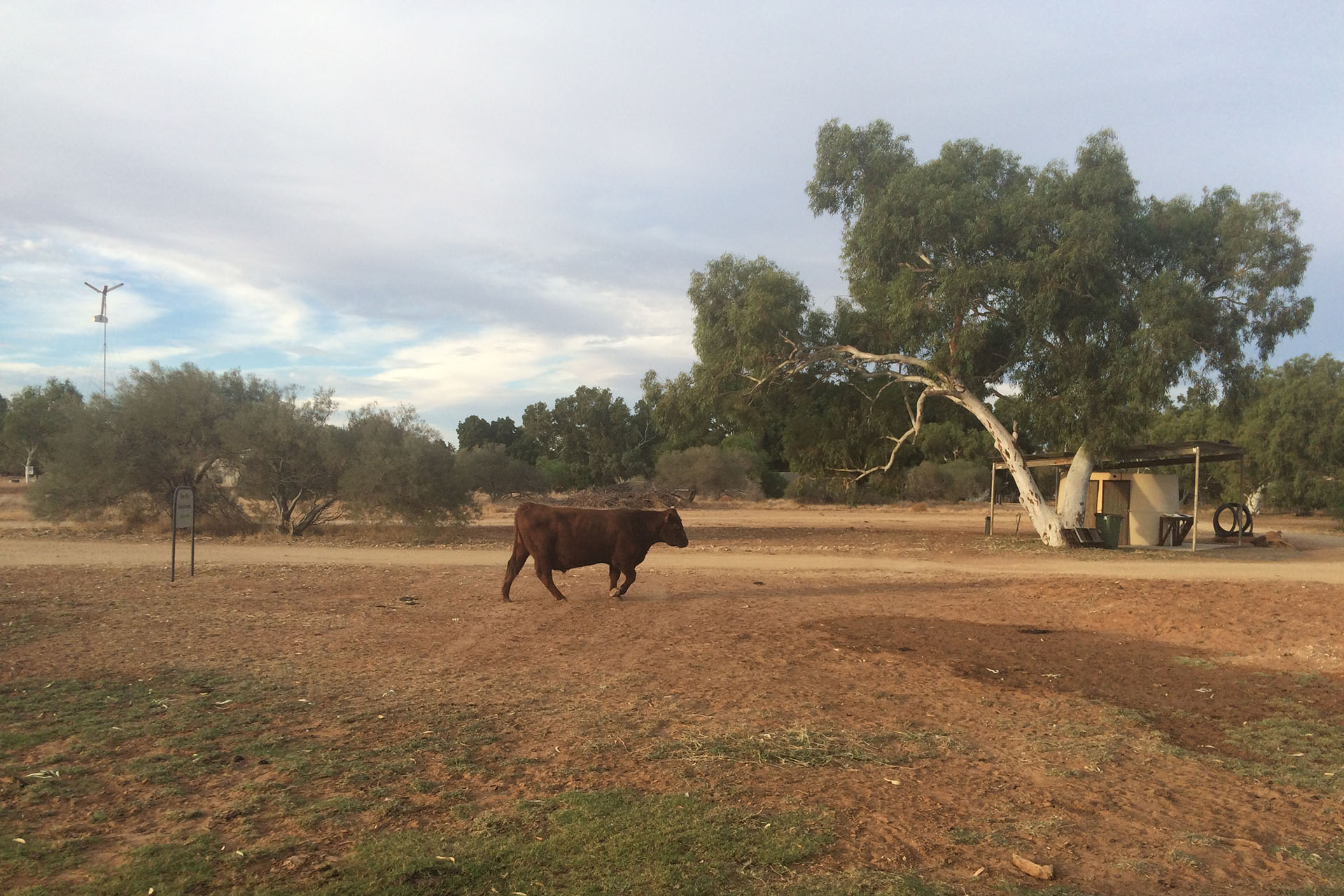 Humanoid life forms are also present. Alen, who decided to give the spa a go, returns after a while and tells me with disgust that someone has just dipped a child with filthy nappies straight into the bath. People are people, wherever they are. I go and take a traditional shower, powered by the same artesian water: all four shower booths are made inside a huge upturned water tank. I like this place a lot, even though there's a high chance to step on a random cow pat while you're walking around. 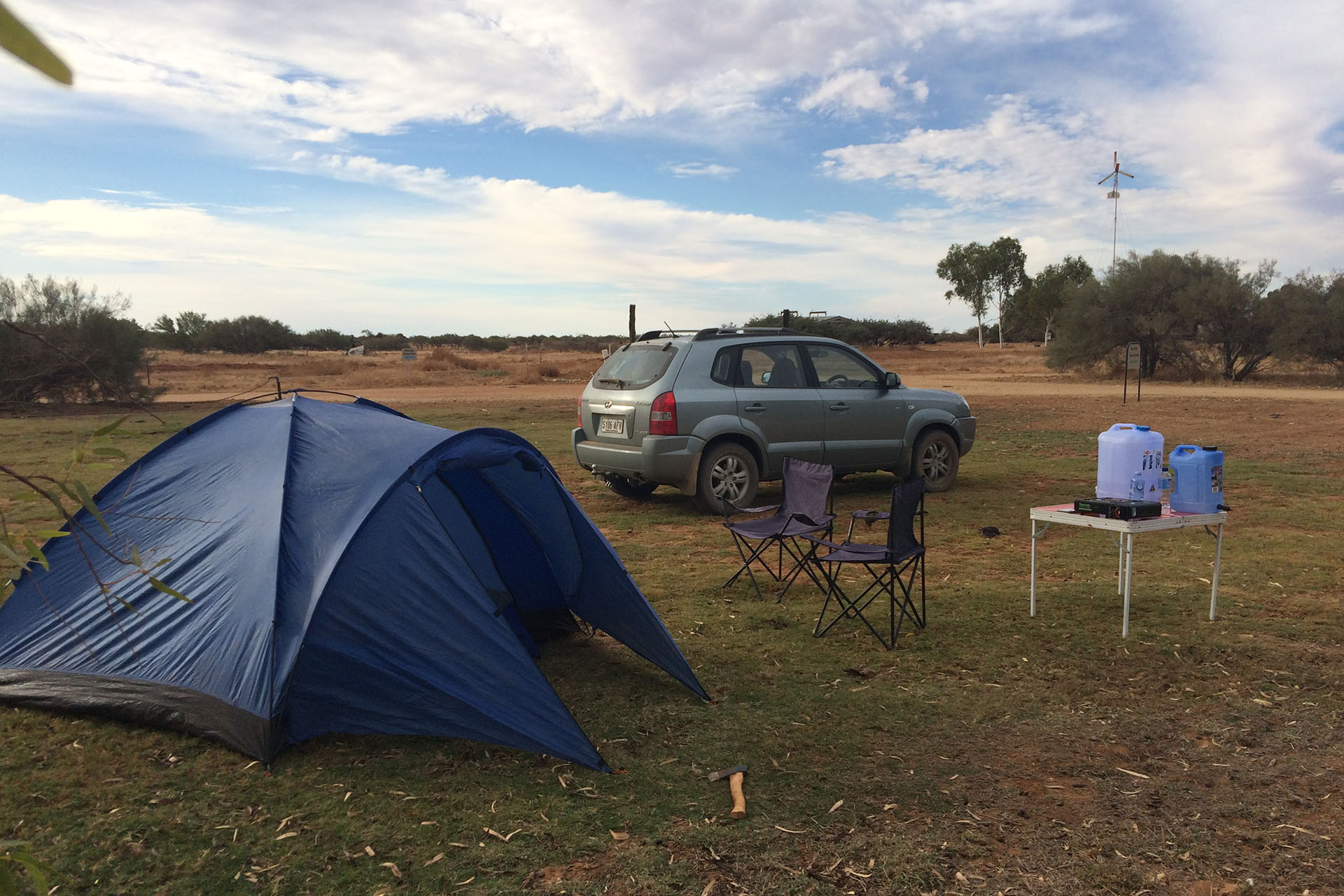 As the night falls, cows begin to walk slowly past our tent and across the dry river bed under the moonlight. It's not that I don't like cows, but having them so close to our fragile tent is slightly disturbing. Hopefully none of them would be curious enough to have a closer look and walk in.