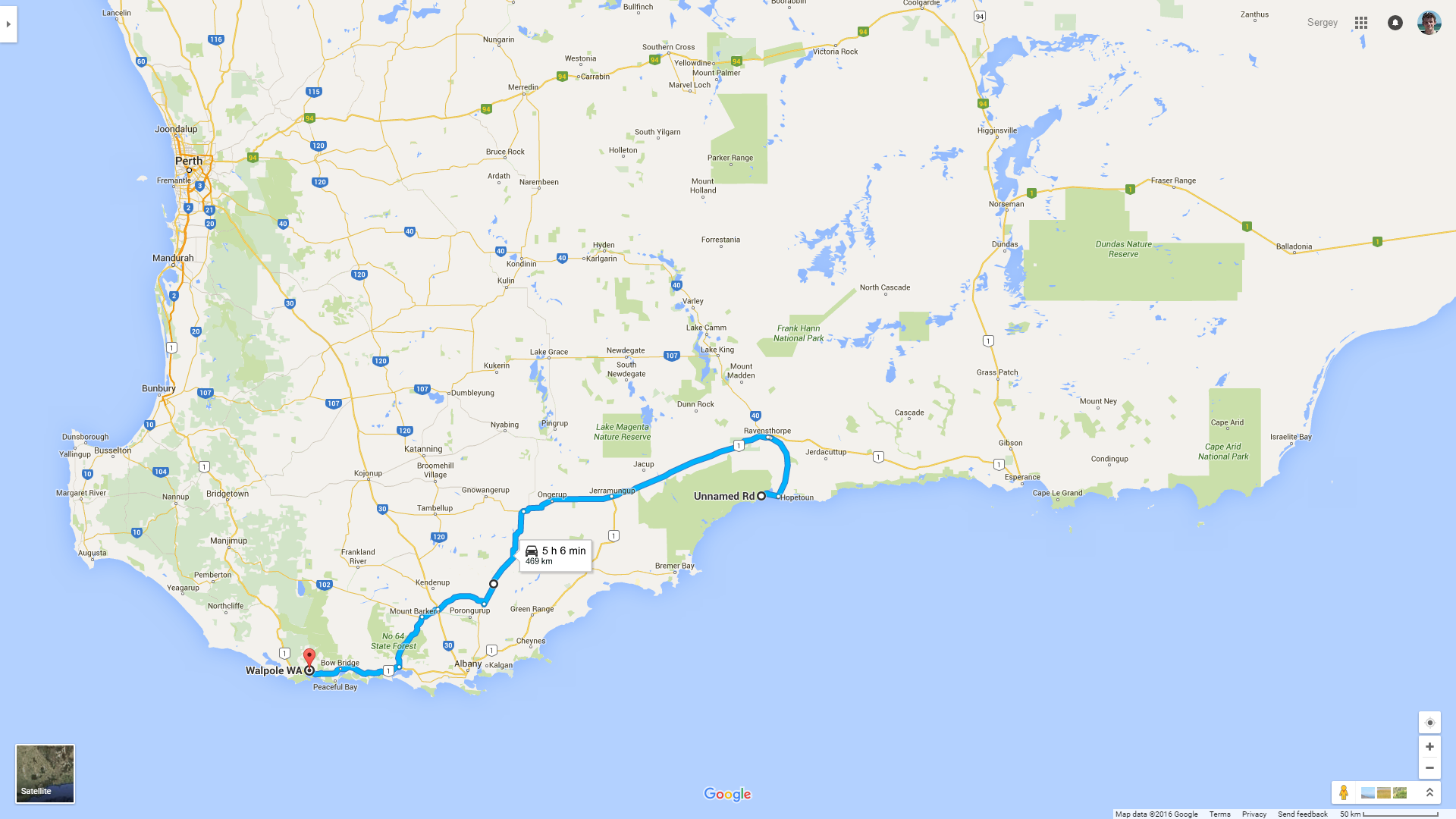 An unpleasant surprise in the morning: drizzling rain, which appears to have started during the night. Things left outside are completely wet, of course, but I'm only worried about the cooker. Just in case I evacuate it inside the tent and dry it carefully with a towel. Due to bad weather, I decide to skip the hot breakfast, and after a few snacks I start to pack up under the drizzle. Not a very exciting procedure, but what can you do.

The rain, however, ruins not only my camp-packing, but my whole morning itinerary. The sky is overcast, the horizon is barely visible through the rain. Still, I decide to go forward. The car climbs up the mountains… and a few kilometres later stops on the dirt road, which is thoroughly wet and insanely corrugated. The only thing that is worse than a corrugated dirt track in Australia is, probably, a corrugated dirt track flooded by water. Well, that's all there is to it, then. I turn around and retreat. 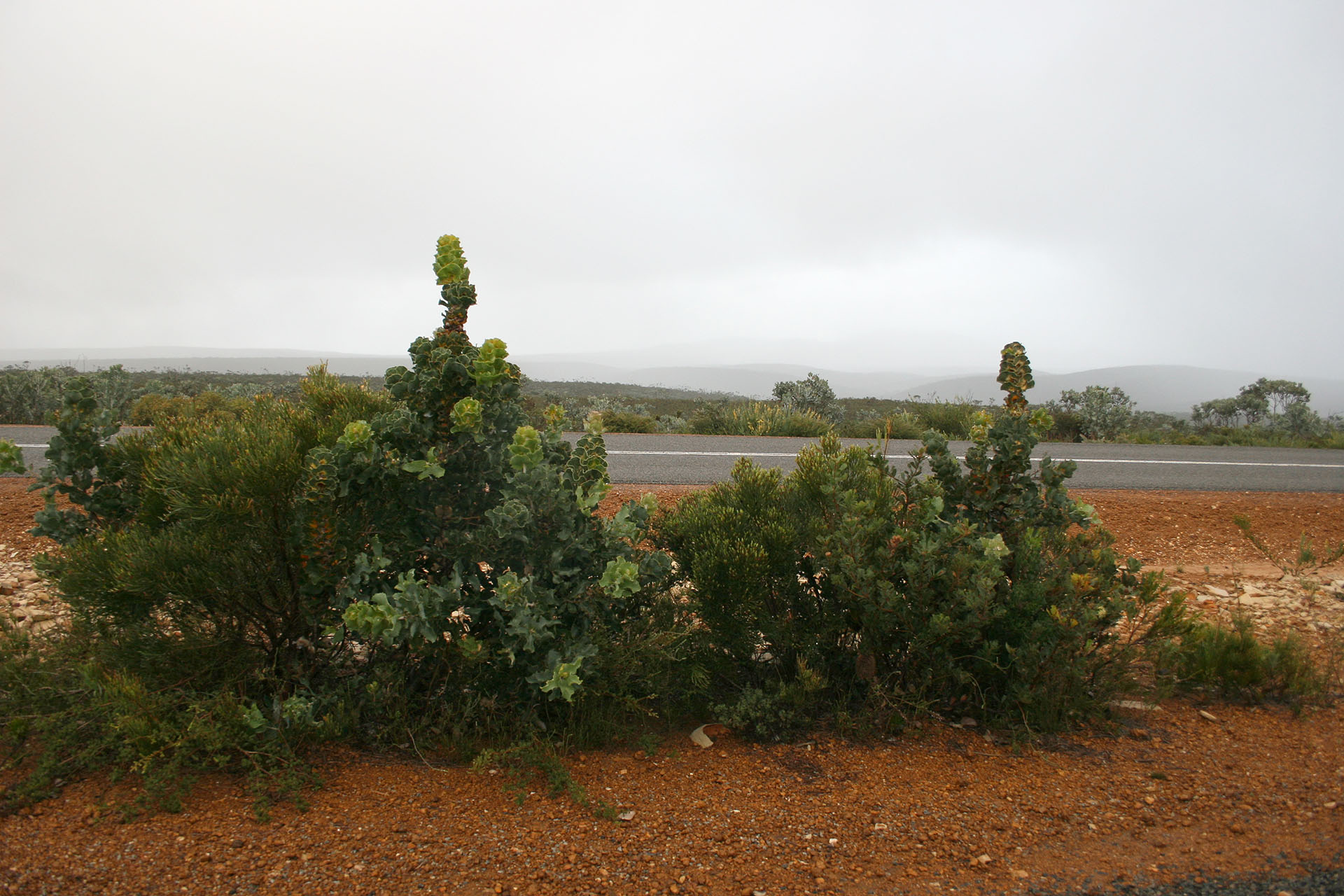 Still beautiful in its own way, of course…

The rain accompanies me all the way until Ravensthorpe, where if finally subsides and stops completely. After making a refuel stop I drive further, past the woodlands and an occasional gust of rain. Hmm. Not a very good start for the day.

I decide to change my itinerary slightly and visit the Stirling Ranges National Park instead of Fitzgerald River. On my way there I enter Jerramungup, where I buy some sliced bacon and apples. (There's a lot of towns in the area ending with “up”: Jerramungup, Manjimup, Ongerup…) A bit further, in Borden, I wash the apples in a public toilet and also refill the jug with “washing” water. Stirling Ranges are clearly visible from here. 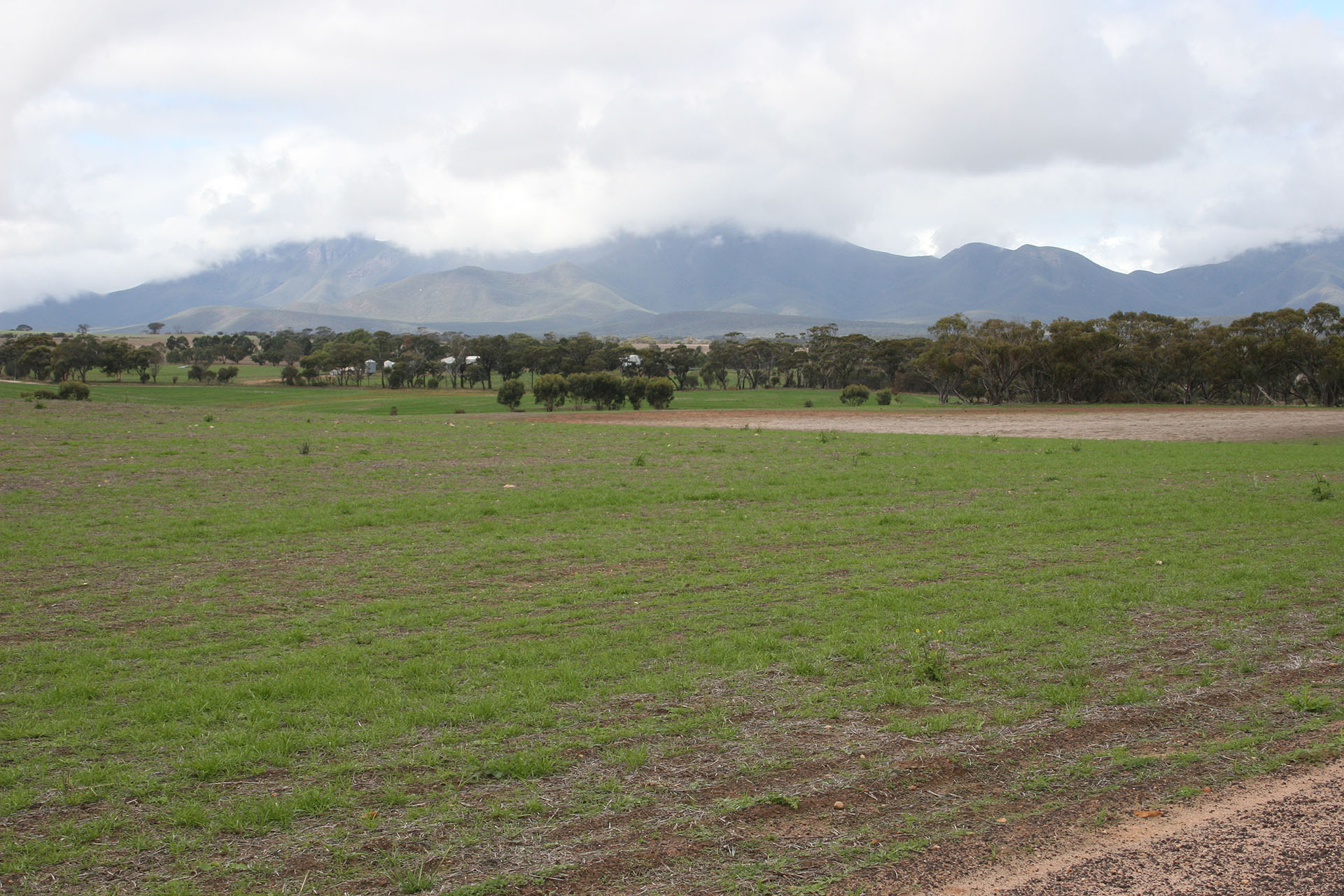 I don't know yet that soon I will be touching these clouds myself.

Amongst the surrounding plains the Ranges are very prominent, rising for about a kilometre above the ground. Once I enter the park and study the info stands, I decide to take a hike to the Bluff Knoll: only three hours there and back, easy! Having paid the inevitable $12, I turn on the excellent bitumen road to get there. 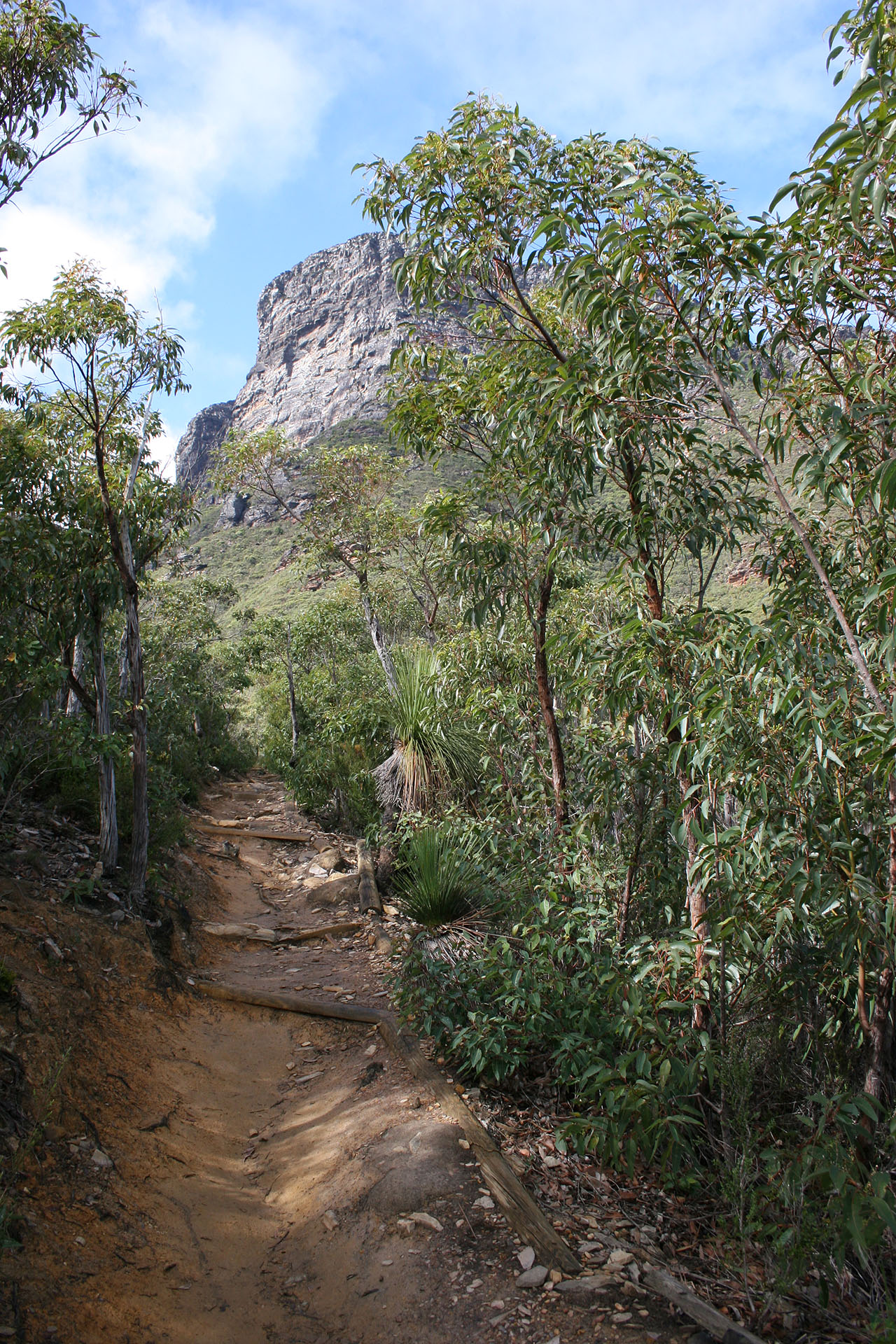 All the way up now.

The mountain looks very formidable, but since I'm already here, there's no other way but up. The track is in great condition, and most of it is steep steps: either woodboard-reinforced or carved in stone. Its difficulty is classified as 3 out of 4, and I don't even want to imagine how a typical “four” looks like, because only a few hundred metres later I stop to take a rest. My heart pounds like crazy, and I'm already covered in sweat. The climb is very steep. 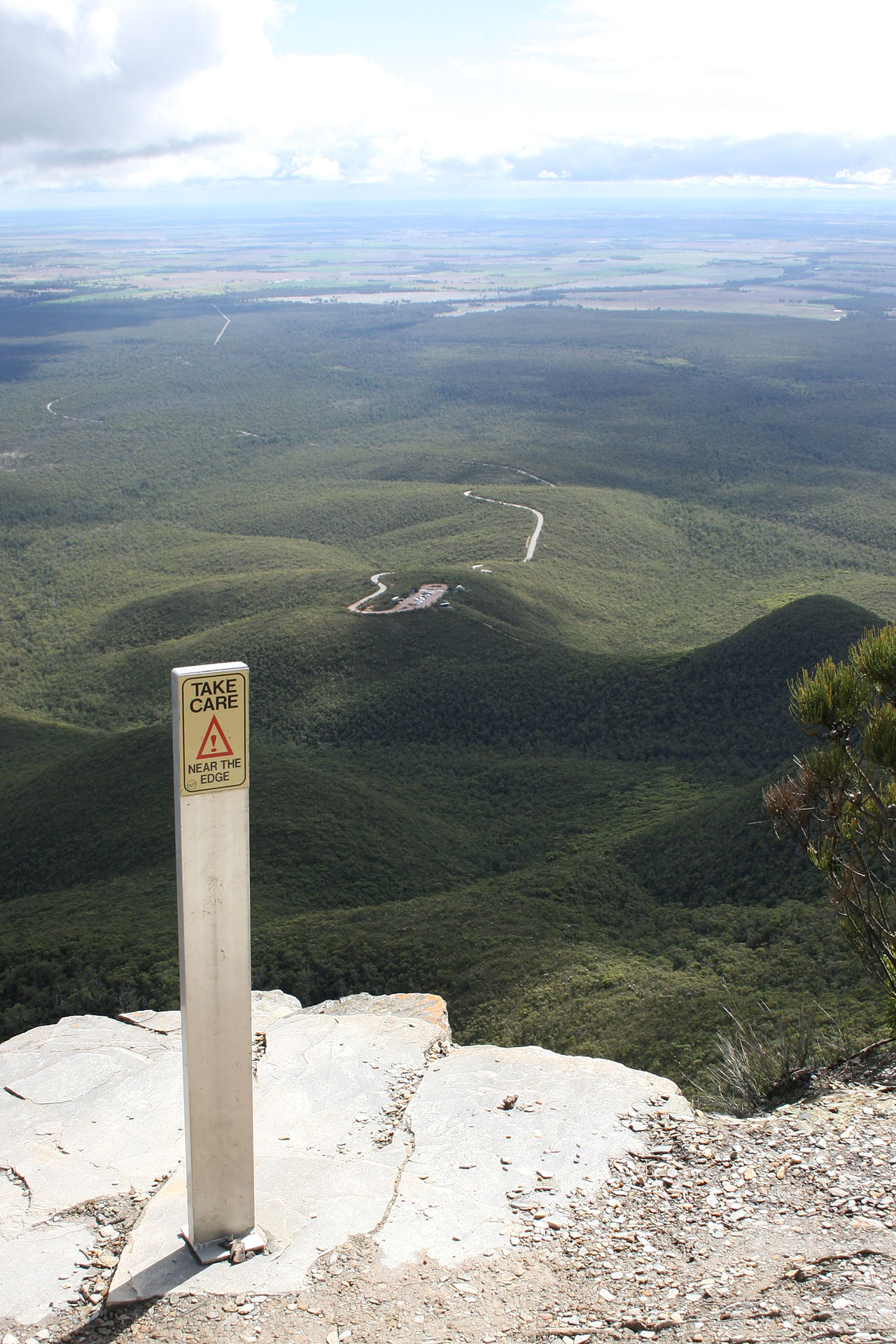 I don't even try to see my car from here.

The worst thing of all is that there are two more families climbing at the same time as me. We keep overtaking each other, and the noisy kids jump effortlessly up the steps like mountain goats. Sweating and cursing and having so many second thoughts, I keep going up, determined not to give the kids an easy victory. The wind becomes cooler and cooler, and I'm glad that I took my hoodie with me. And when I finally feel that that's it, that I'm turning back right now… the track suddenly levels down, and I walk last third of the way effortlessly. 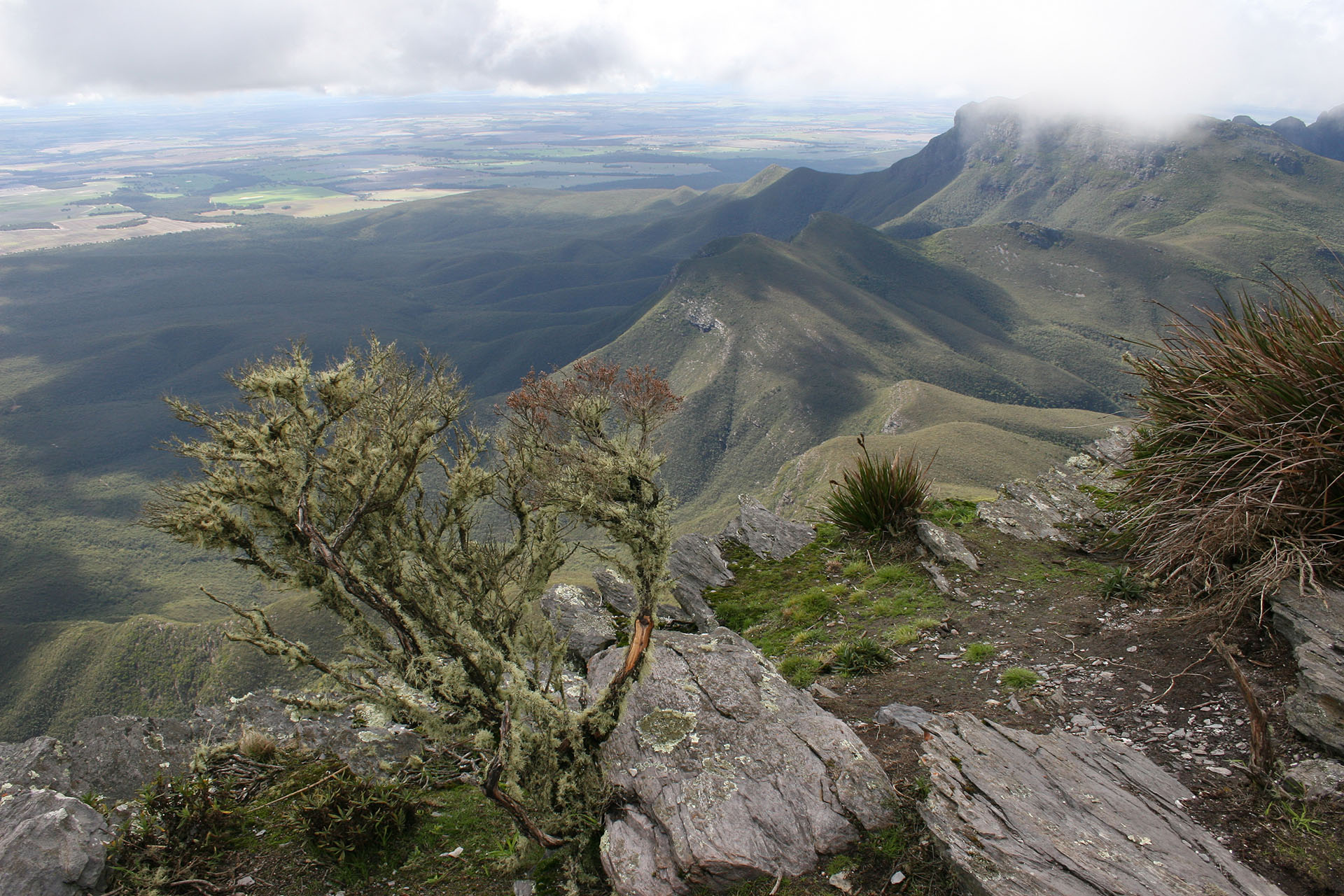 Here I am! Right at the top. 1099 metres above the sea level. Windy. Vast aerial plains all around, including the rest of the Stirling Ranges. And it's finally quiet, because I have finally overtaken the bloody kids. Awesome! Having spent a few minutes in the blissful, chilly silence of the mountaintop, I begin my way back down. 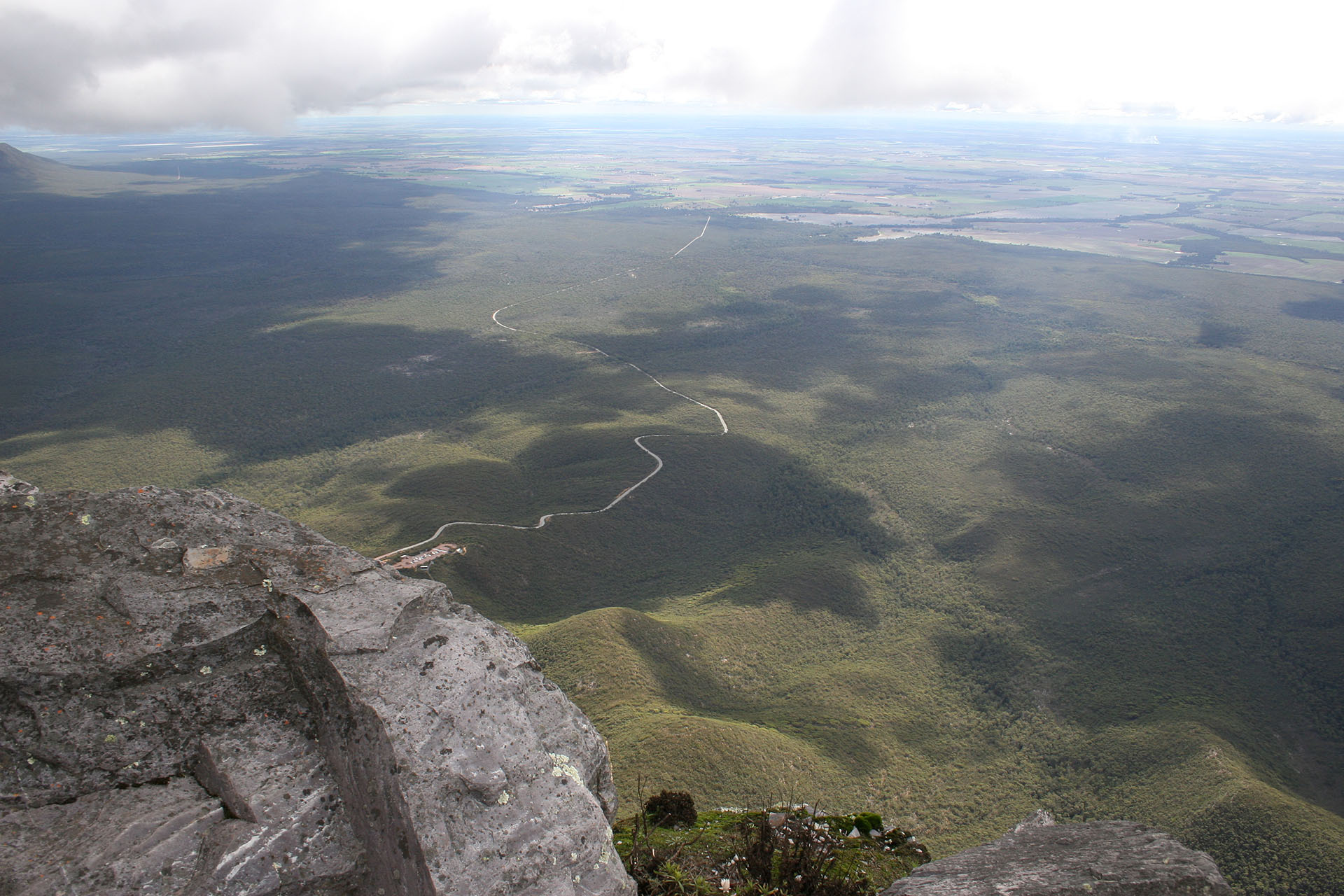 From somewhere over there I came.

Meanwhile, a cloud descends upon the Knoll, and everything gets foggy and even colder than before. Info stands tell me about people who became lost in the fog, but I have no idea how they managed to do that: it's not that foggy, and the path is marked and visible very well. Quiet and humid all around, and — surprise! — I can even hear the frogs croaking somewhere. They must feel themselves quite at home here, surrounded by ever-present moisture. Indeed, the landscape reminds me more of a steep river bank, and even a brook trickling is heard somewhere nearby. 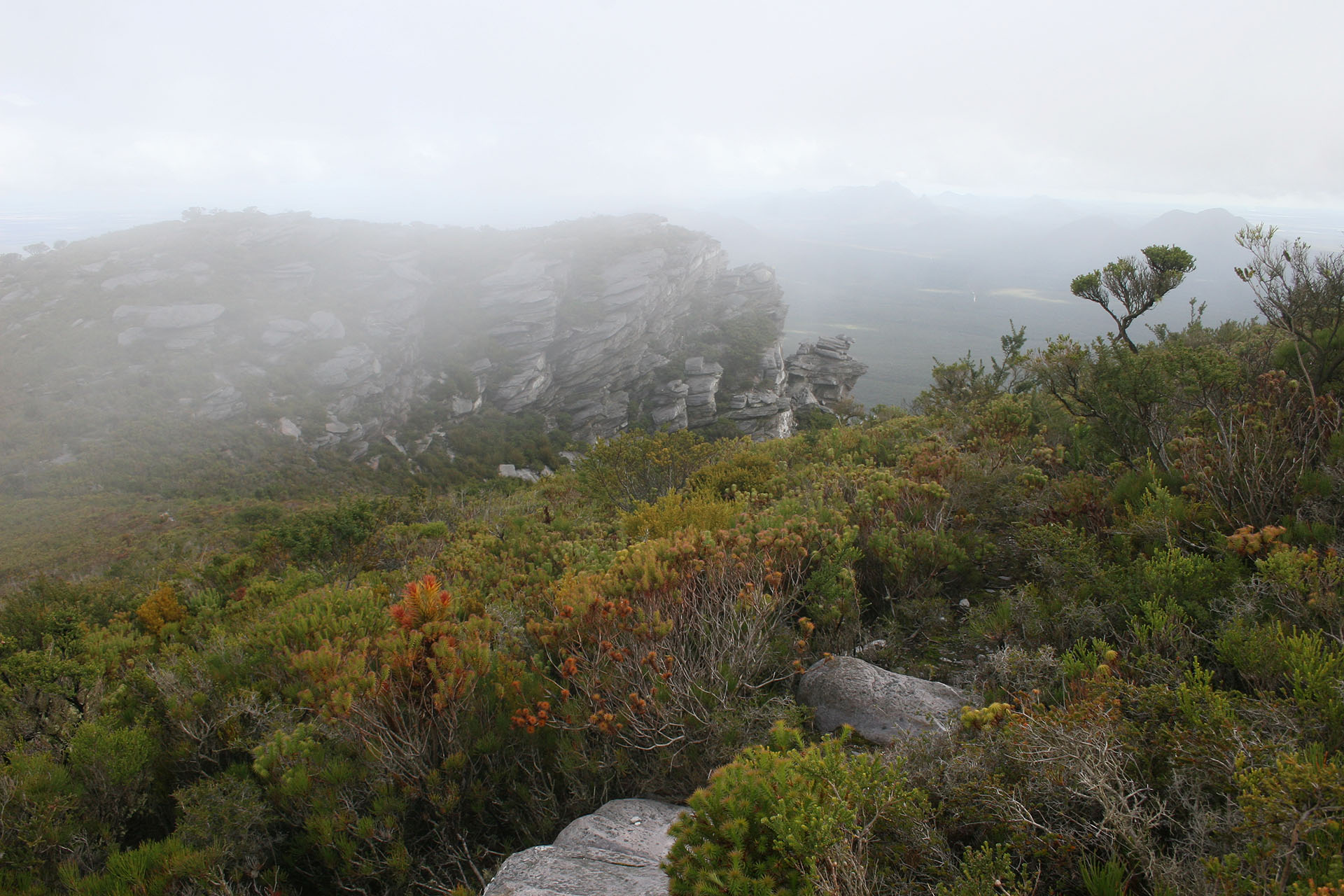 Navigating through the clouds.

If there's something beautiful in such a painstaking climb (awesome views notwithstanding), it is the immeasurable bliss that you feel while climbing down. So much joy as I jump from step to step: down, down, down! So much smugness as I look at the red, sweaty people who are still climbing up! And among all these pleasant thoughts and emotions I suddenly have an idea how to optimize my further journey.

Not too far from Walpole, there is a place called Tree Top Walk which I really want to see. The original plan: reach Walpole today, visit the Walk tomorrow morning, and then drive to Perth. But the Walk only opens at 9 a.m., which is a bit too late for my usual 6 a.m. schedule. Too much free time in the morning, too little time after that to reach Perth. But what if I visit the Walk today instead of tomorrow? As I continue my joyous descent from the Bluff Knoll, I check up the Internet and find out that today the Walk closes at 5. I still have time!

Once I'm at the parking lot, sweaty and tired but very determined, I jump into the car and dash towards Walpole. Stirling Ranges slowly grow dim and disappear on the horizon, replaced by woodlands and fields. There is fire on some of the fields, but from the lack of frenetic activity around I take it that the burning is controlled. Apparently, they do those every now and again in this area. 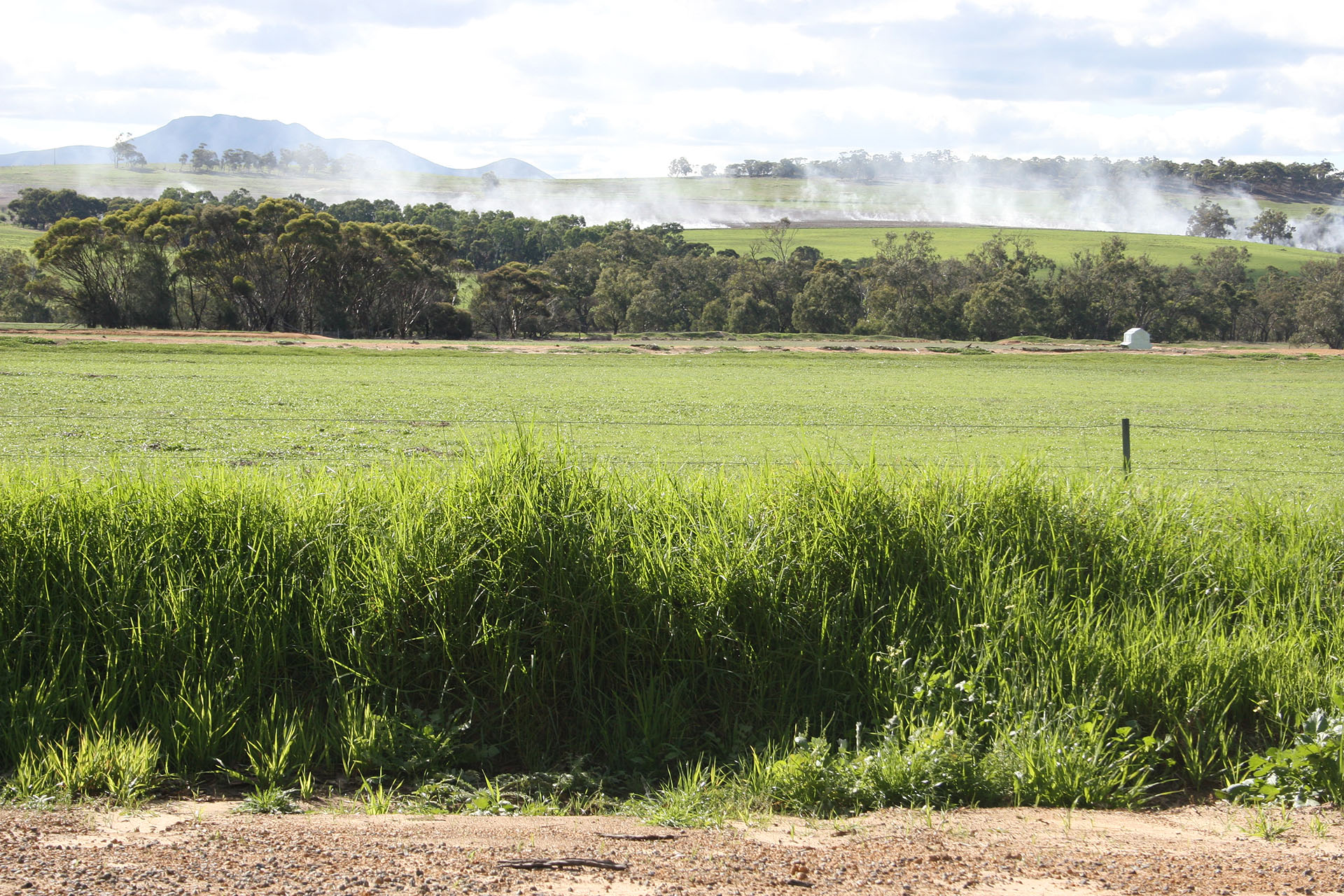 Fields and the supposedly controlled burnings.

Gradually the fields disappear as well, and forests come along. And what forests! The trees are so huge that I can't even see their tops from inside the car. After four days of saltbush and crooked, black, tree-like desert vegetation, forests like these look otherworldly. And, indeed, this whole region looks very European: well-tended fields, little white houses, not to mention the forests. It's almost as if like I'm in another country now.

At quarter to five I arrive to the destination. Target achieved! I pay the fee and go in. Trees here are the highest I've ever seen, and amongst their branches a special bridge is installed, leading me from one tree to another. This is the Tree Top Walk. 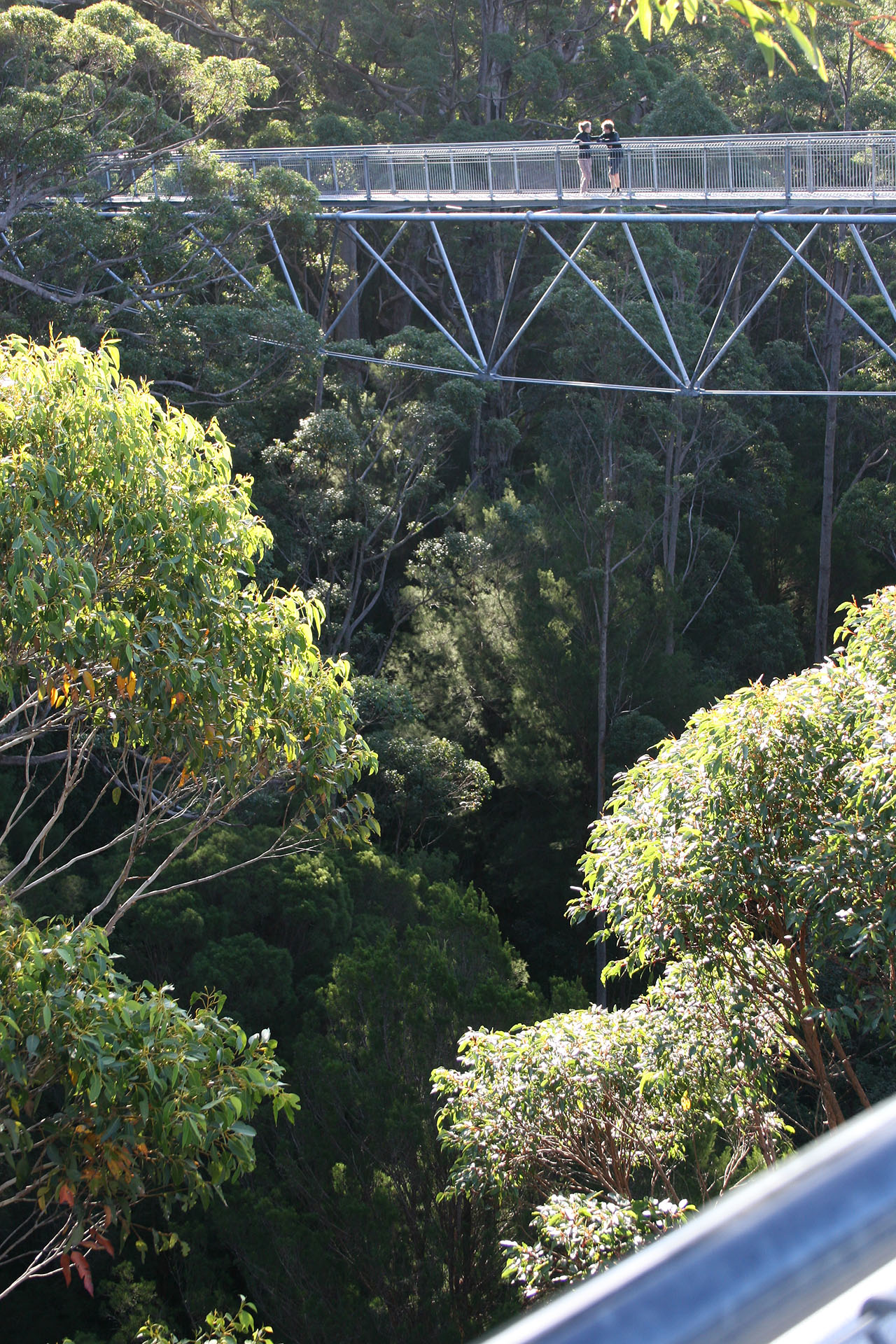 Romantic encounters above the trees.

The bridge sways noticeably back and forth as you go along, but you only get dizzy when you look 40 metres down. I try not to do so. Giant gums and karris look extraordinary in the slanted rays of setting sun. 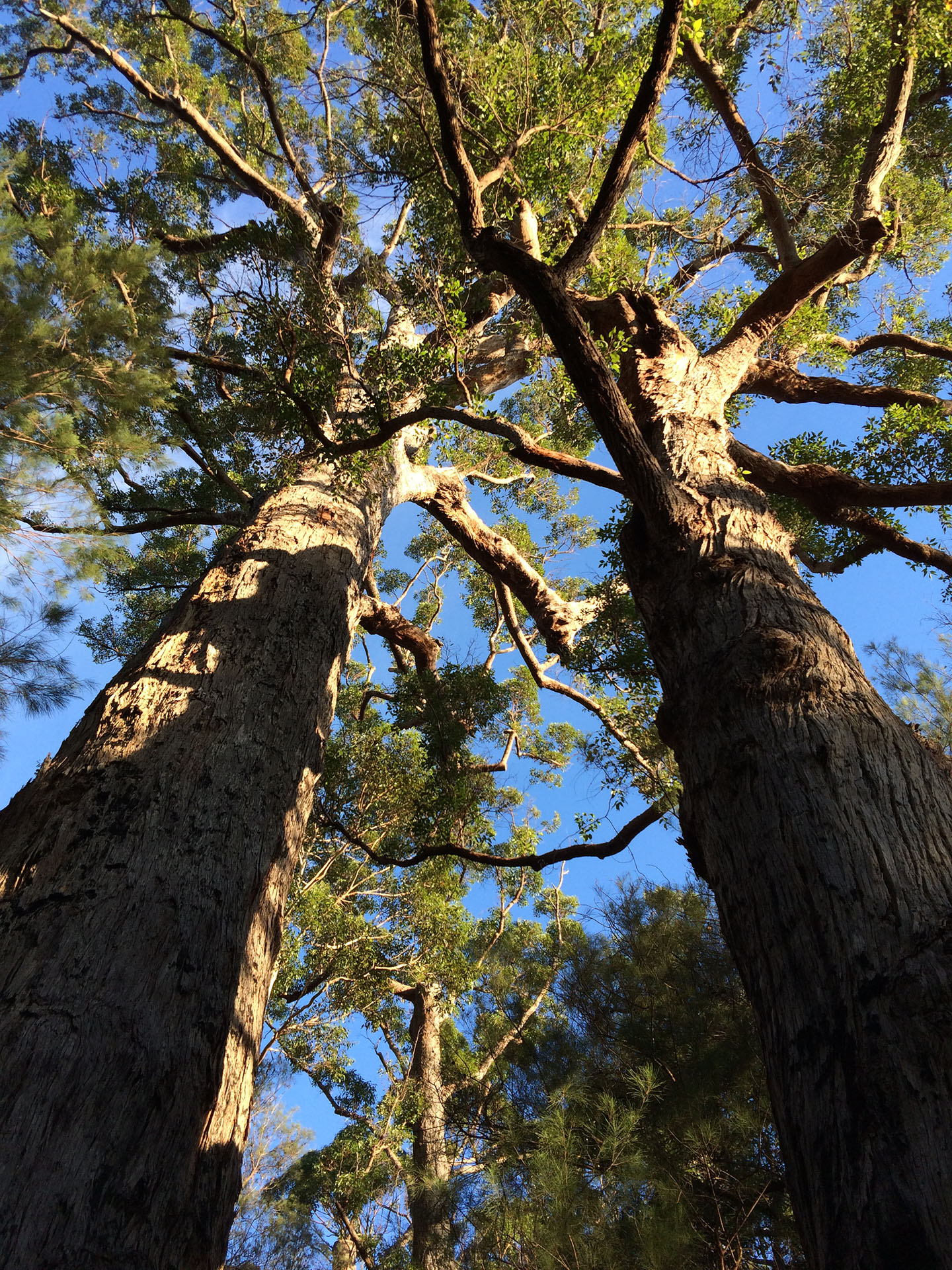 View from the ground is also quite spectacular.

Once I'm back down, I realize that there are two walks included in the admission fee; the other one is called “Valley of the Giants”. I go in. The scent of the temperate forest is so typically Russian that it feels like I'm back home, not too far from Saint-Petersburg. The vegetation is entirely different, though: giant karris and gums, ferns, and also huge old stumps – burned, or rotten, or burned and rotten at the same time. It is forbidden to step down from the footbridge, so I touch everything that is available next to it. Karri's bark is warm and soft, and it feels like cork under hand. 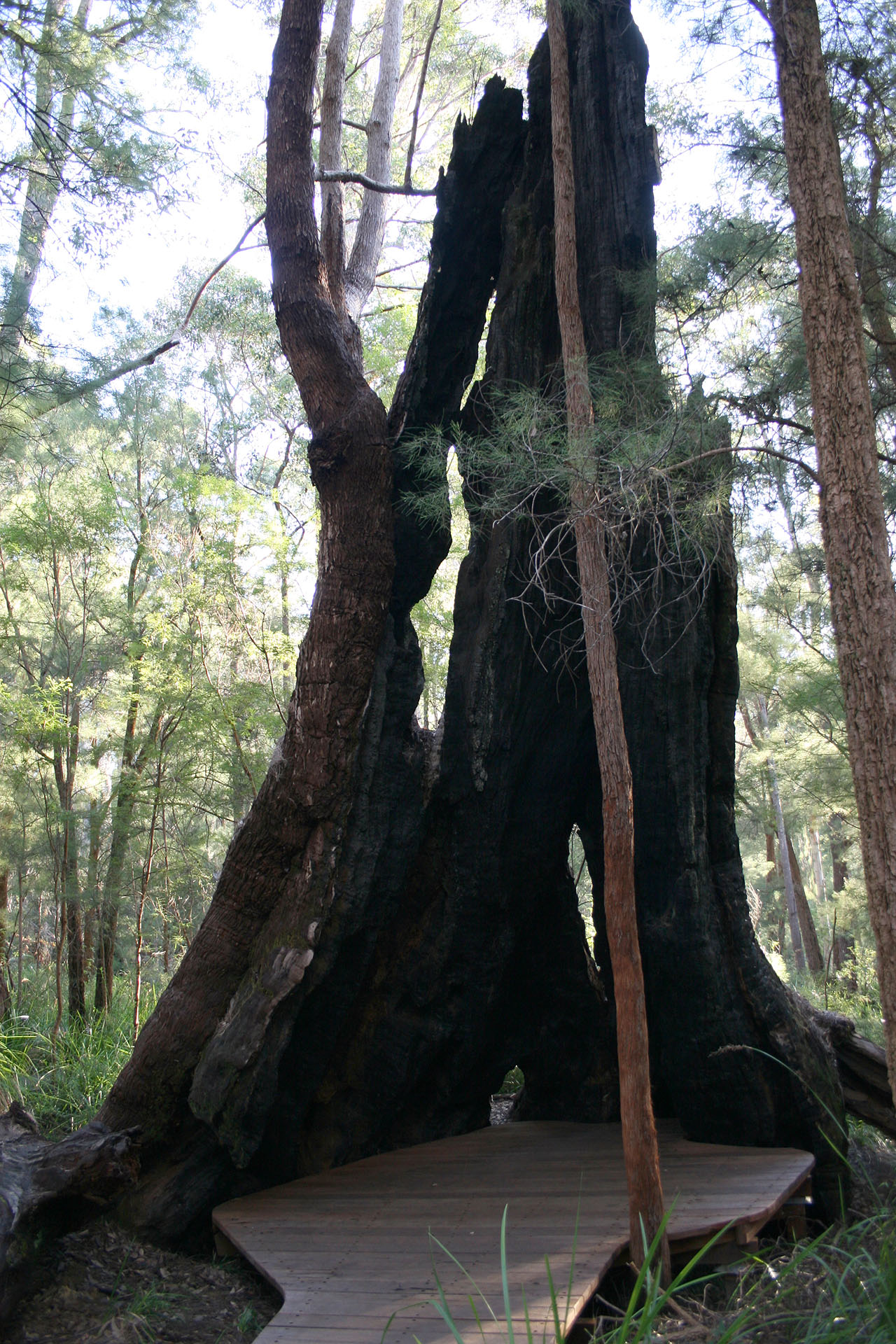 One of the local little stumps.

Once I see everything there is to see in this beautiful forest, I drive out of the park and arrive to Walpole. Here I decide to sleep in a proper room for a change – in a motel for $45 per night. (There is another motel next to it: looks much nicer, but costs three times as much.) Dodgy cars and shabby tenants don't look very promising, but I check in nonetheless. The room is quite clean, though, with a real bed and real fresh linen on it. What's more to ask? 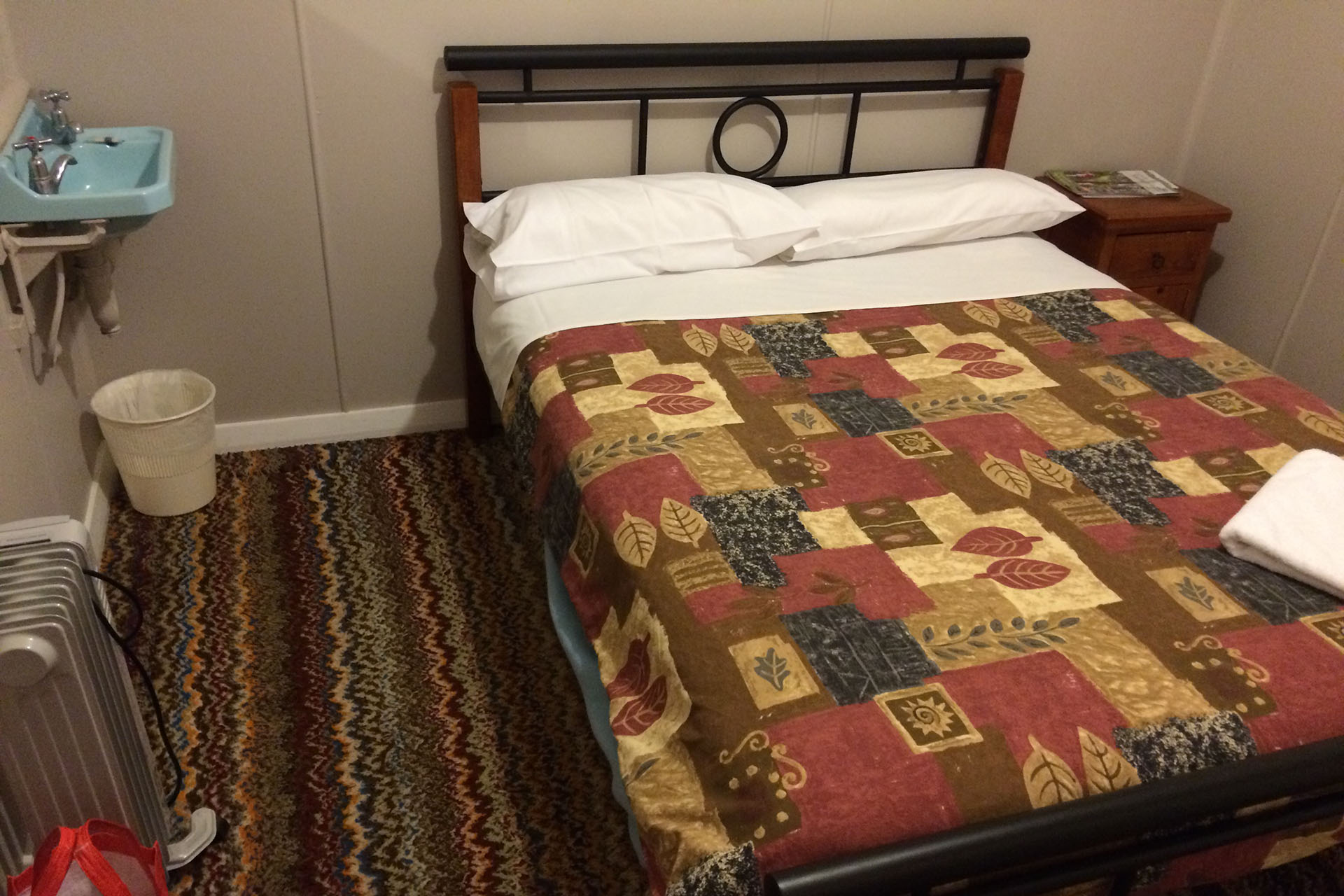 I take a shower, have my dinner at the kitchen (a bit odd to hear TV murmuring on in the living area: civilization!) and return to the room to finally have some sleep. Beds are awesome. Even though the sound insulation is far from perfect: I can hear the vibration of my neighbour's phone on his bed stand behind the wall.