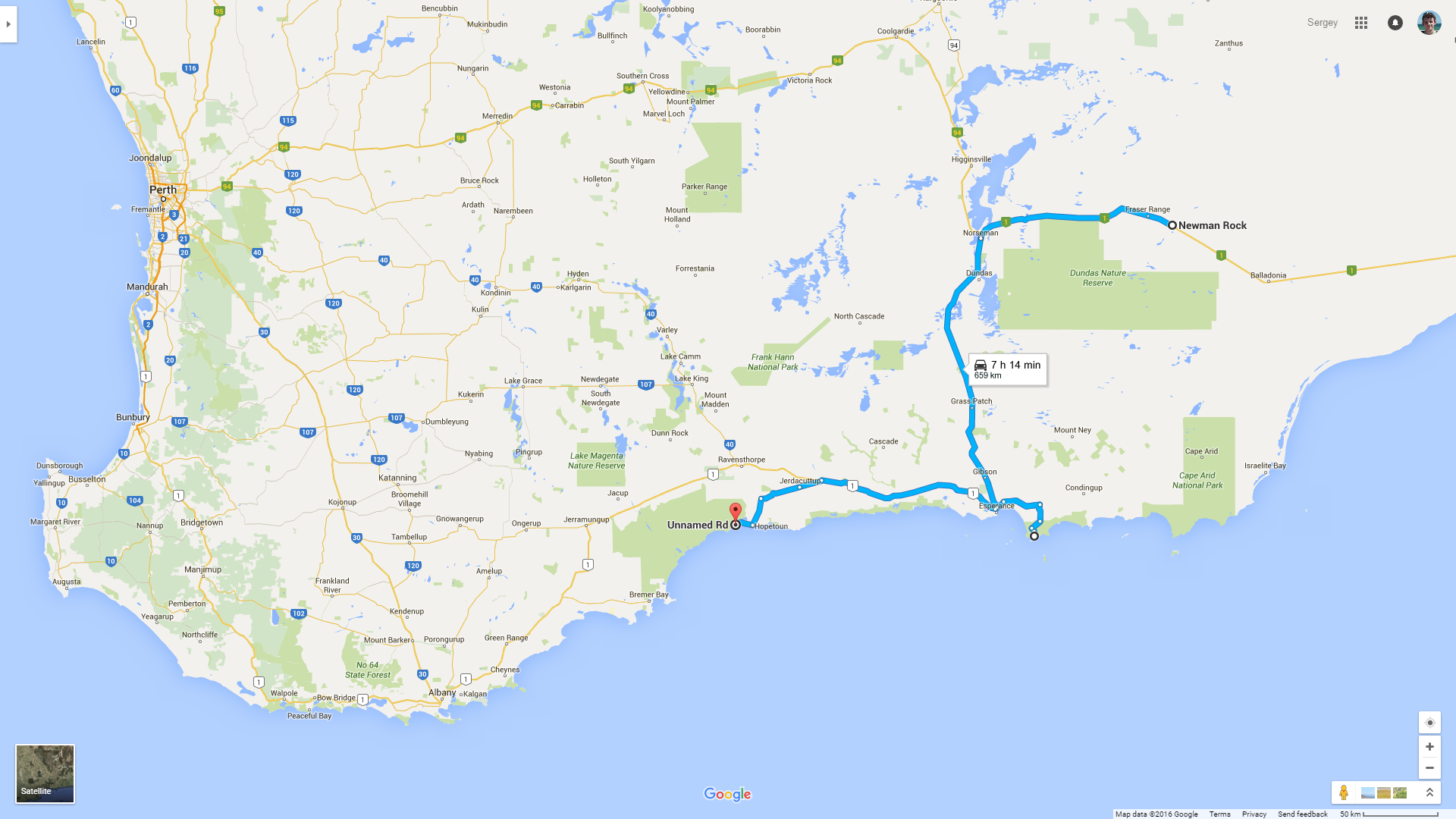 I slept wonderfully. However, the warm and windless night resulted in thick dew all over the tent. I have to wrap it wet, and after that my hands are all covered in red sand. Still, I'm quite happy and excited. Even despite these little shortcomings and occasional panic attacks, it's still very beautiful around, and my journey is going exactly as planned.

Approaching Norseman, I see a very picturesque hill next to the highway: it's quite weathered, and it looks that you can climb up on it quite easily. I instantly decide to do so, just to enjoy some more of the morning scenery. From this height, this part of Western Australia, with its vast woodlands and glistening lakes, looks markedly different compared to the Eyre or Nullarbor. 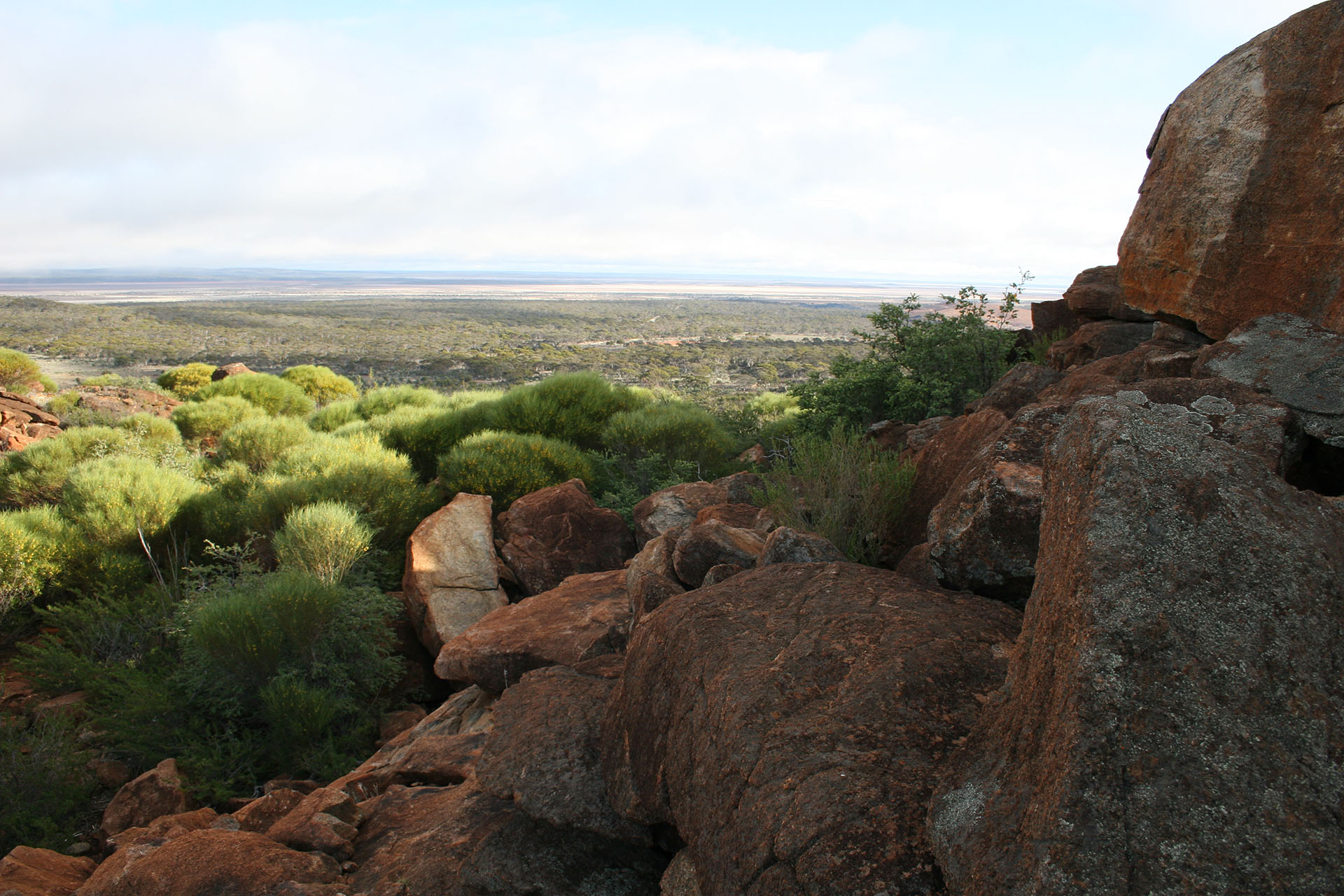 You can even spot a mining site far ahead, if you try. 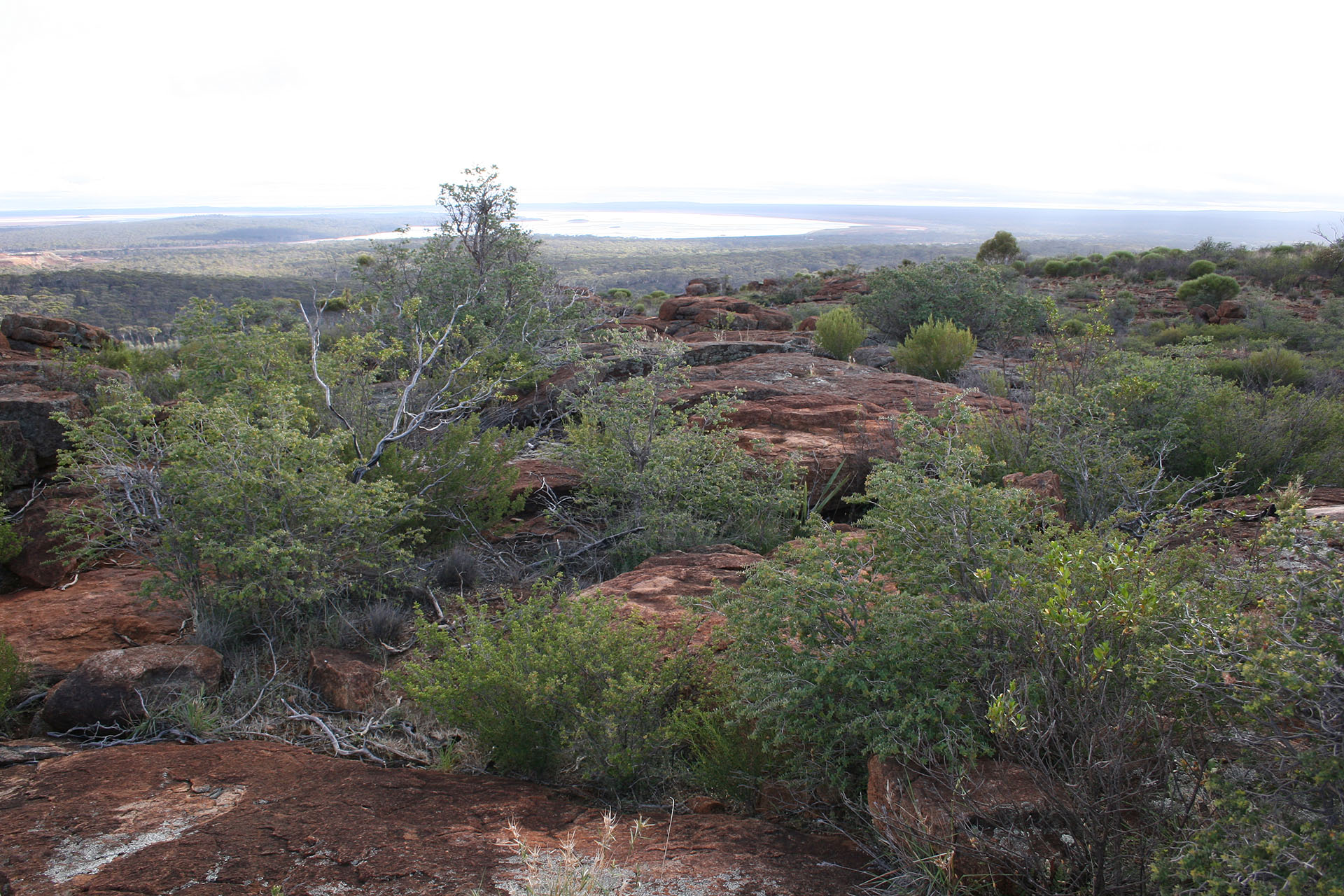 As I go downhill, I see a peculiar black bug under my feet: half a finger long, it has bright orange zigzags all over his back. Unfortunately, before I can take a picture, the bug promptly takes cover inside a dry hummock, so I have to leave without any graphical evidence. What a diva!

Finally, I reach Norseman: the first outpost of Western Australian civilization. It is a small, but proper town, not just an isolated roadhouse. At the service station I see a sign saying “Showers” and ask how much. For a mere $3.50 I'm allowed to go in and have my first shower for three days. Unbelievable relief.

Woodlands continue to occupy both sides of the highway beyond Norseman. Now I'm driving south instead of west; I'll turn westwards again when I reach the coastline. On my way, I make a quick detour to see the site of a ghost town called Dundas, of which there's very little left except a few bricks. The gum trees and the dry lakes have firmly taken hold. 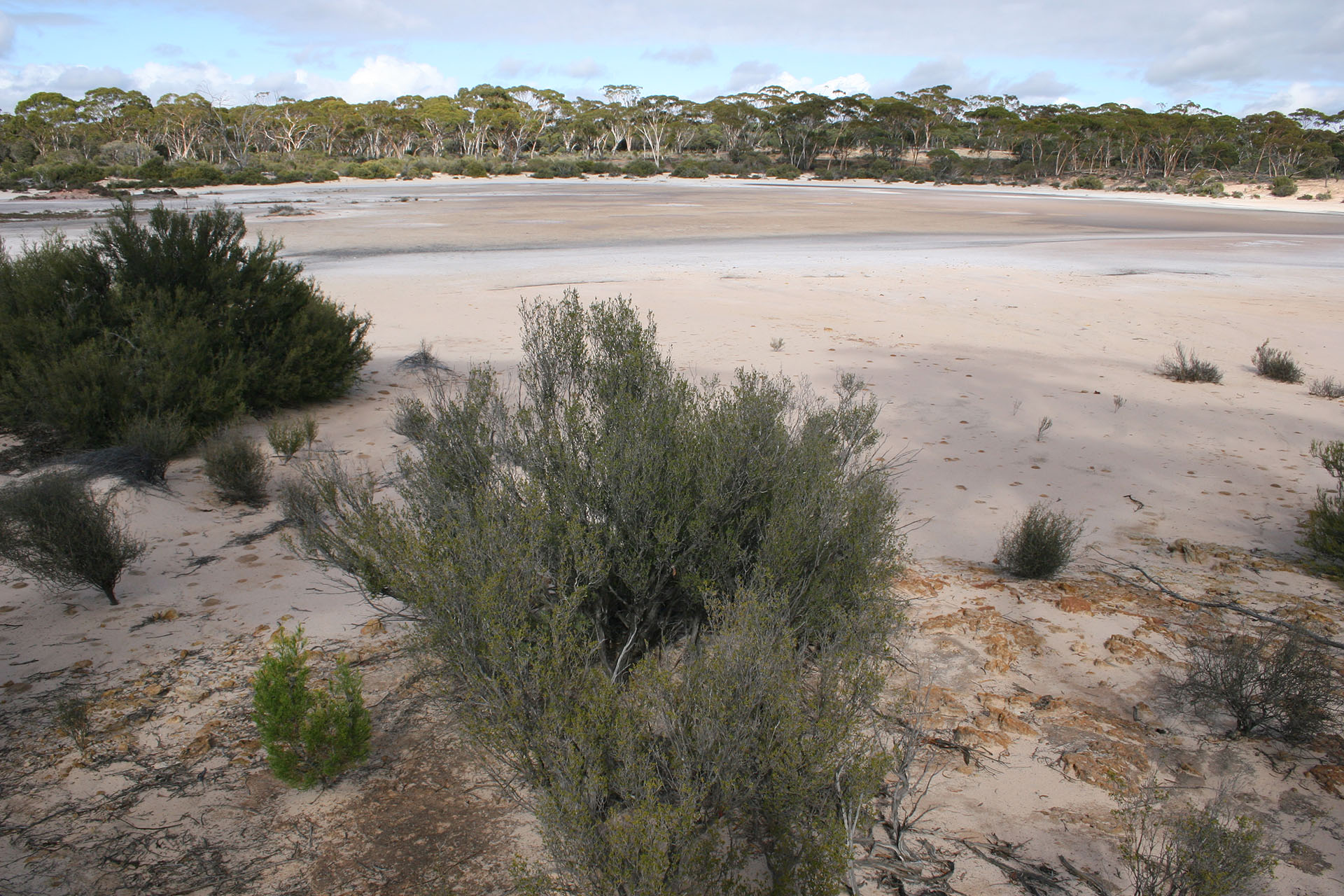 One of the dry lakes.

The further down south, the more noticeable the civilization becomes. More and more farms and pastures, sometimes intermingled with sandy woodlands. Dry and bare bushes look hostile and mysterious. 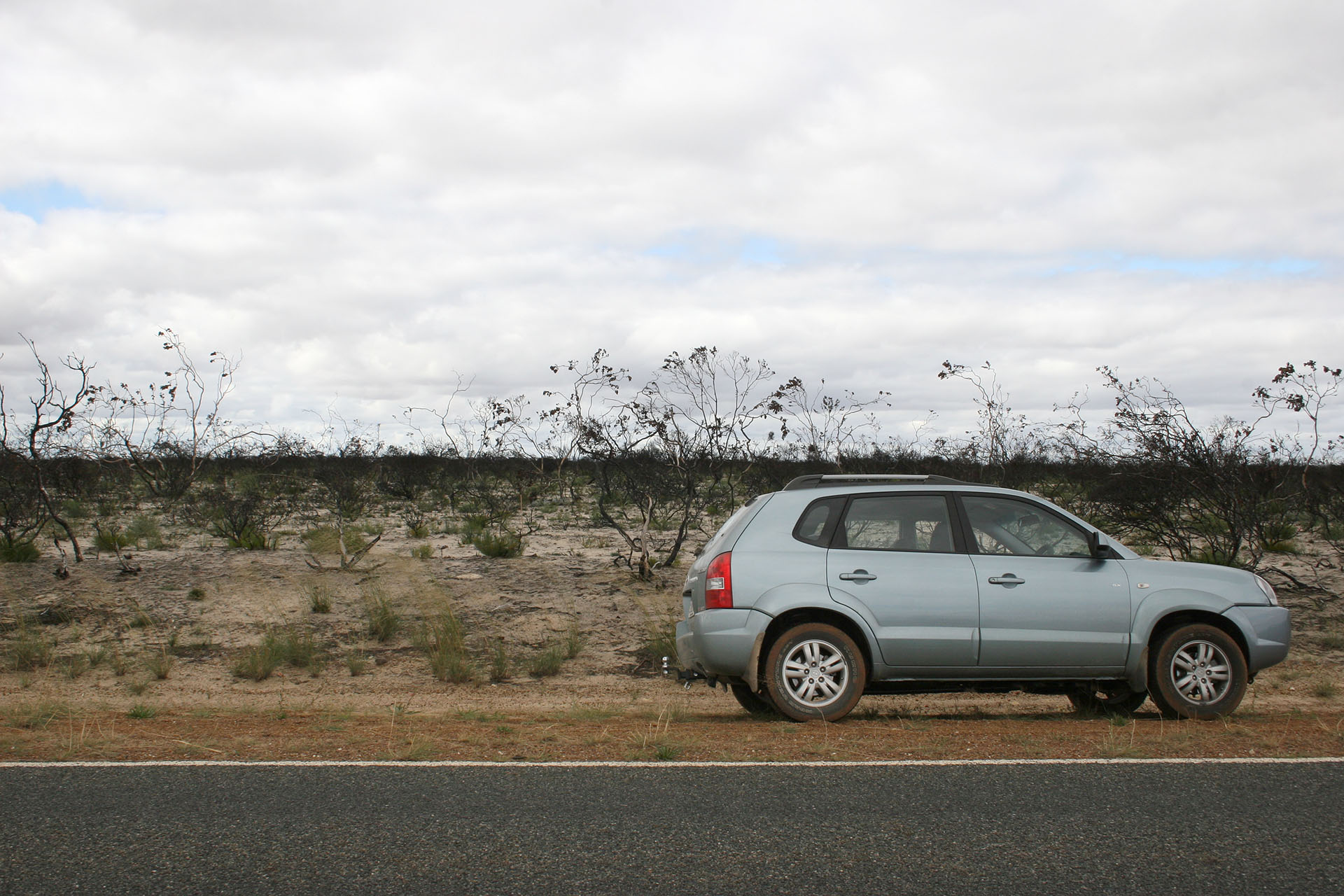 A tiny bit of post-apocalypse in the landscape.

By the time I arrive to Esperance, the civilization is established firmly all around. I fill the fuel tank and take a short drive across the city towards the bay. The town is bustling with activity, even the ships in the harbour look very busy and serious. 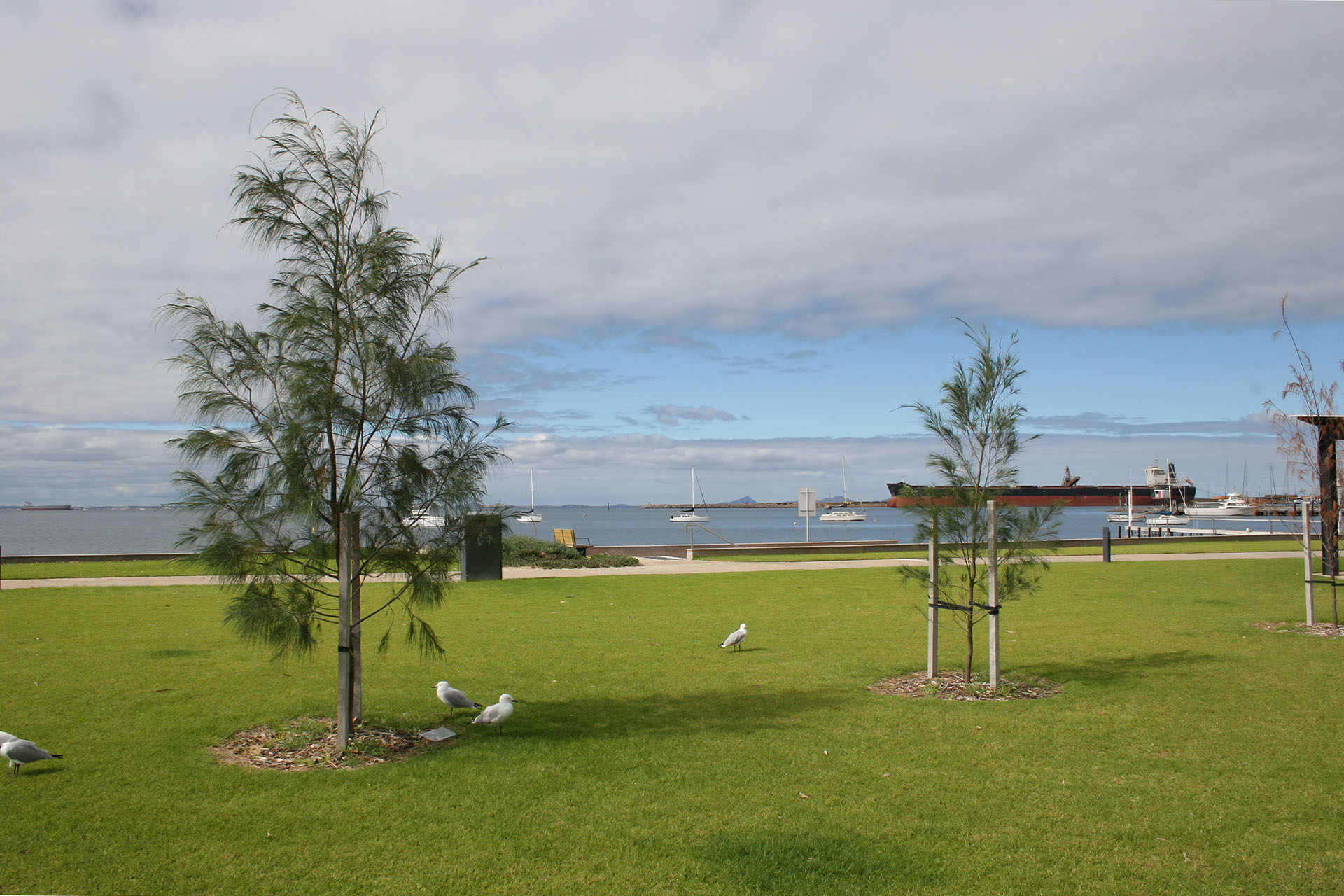 The coastline of Esperance.

About 40 km east of Esperance there is a well-known national park called Cape Le Grand. A fair bit of French names around the area (hi, marshal Murat!), with D'Entrecasteaux being perhaps the most tongue-twisting. There is another sight on the road to the park: a life-size replica of Stonehenge, built by some industrious farmer on his property. I toy with the idea of stopping here and taking a closer look; but once I see that the Stonehenge is covered with thick plywood boards from the road, so as to protect it from the prying eyes of non-paying tourists, I scoff at such obvious demonstration of greed and pass it by. 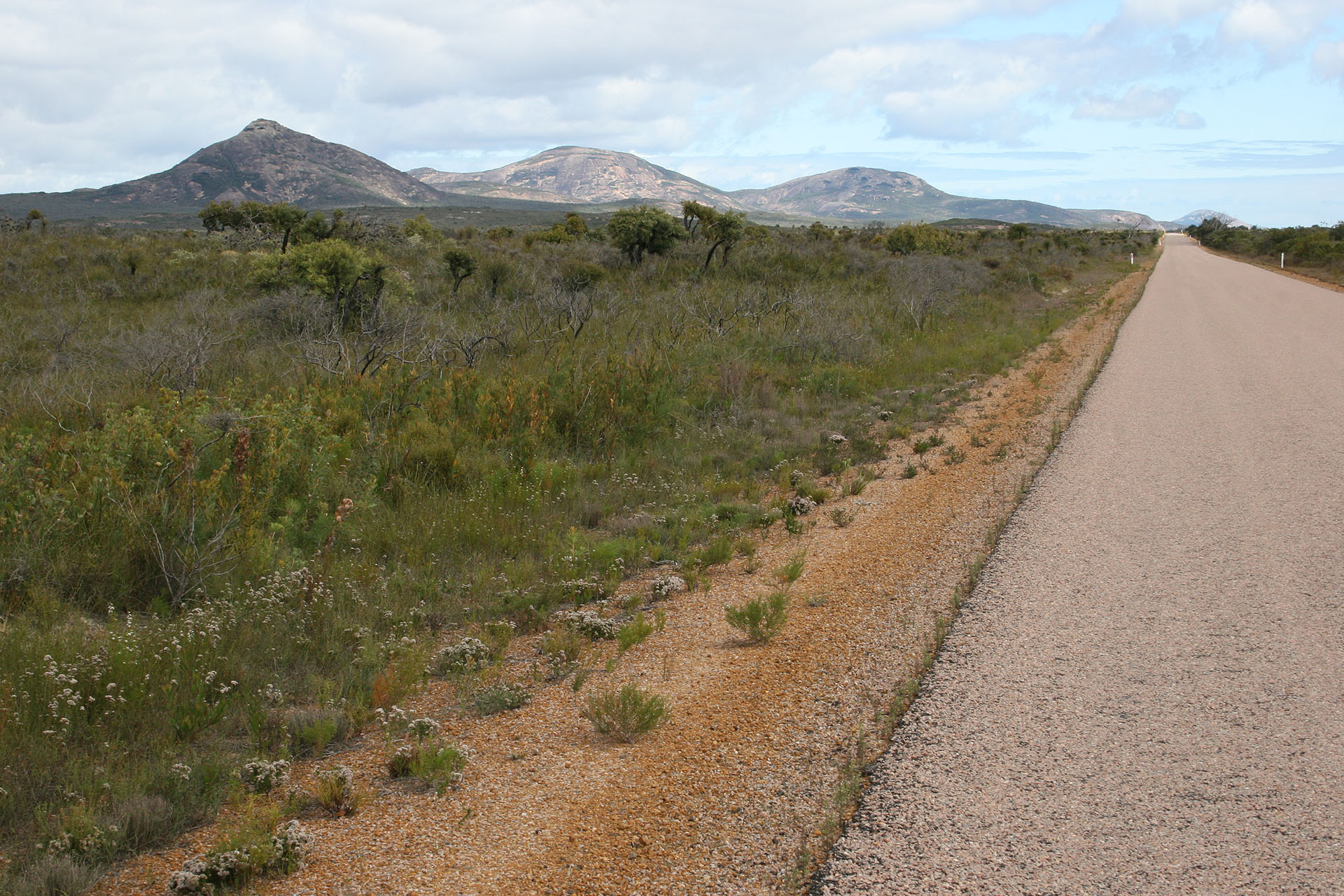 And here's the park at last. Looks very scenic, indeed: green grass and bushland, plenty of vegetation, velvety hills on the horizon. I drive past the hills and arrive to the Lucky Bay. It is covered with perfectly white sand, dried seaweed, and swarms of tourists. Probably fifty or sixty of them are occupying the beach along with their cars, not paying any attention to the fact that it's Wednesday and a middle of the working week. Almost a dozen of them crowd the teenage kangaroo who decided to visit the beach as well. 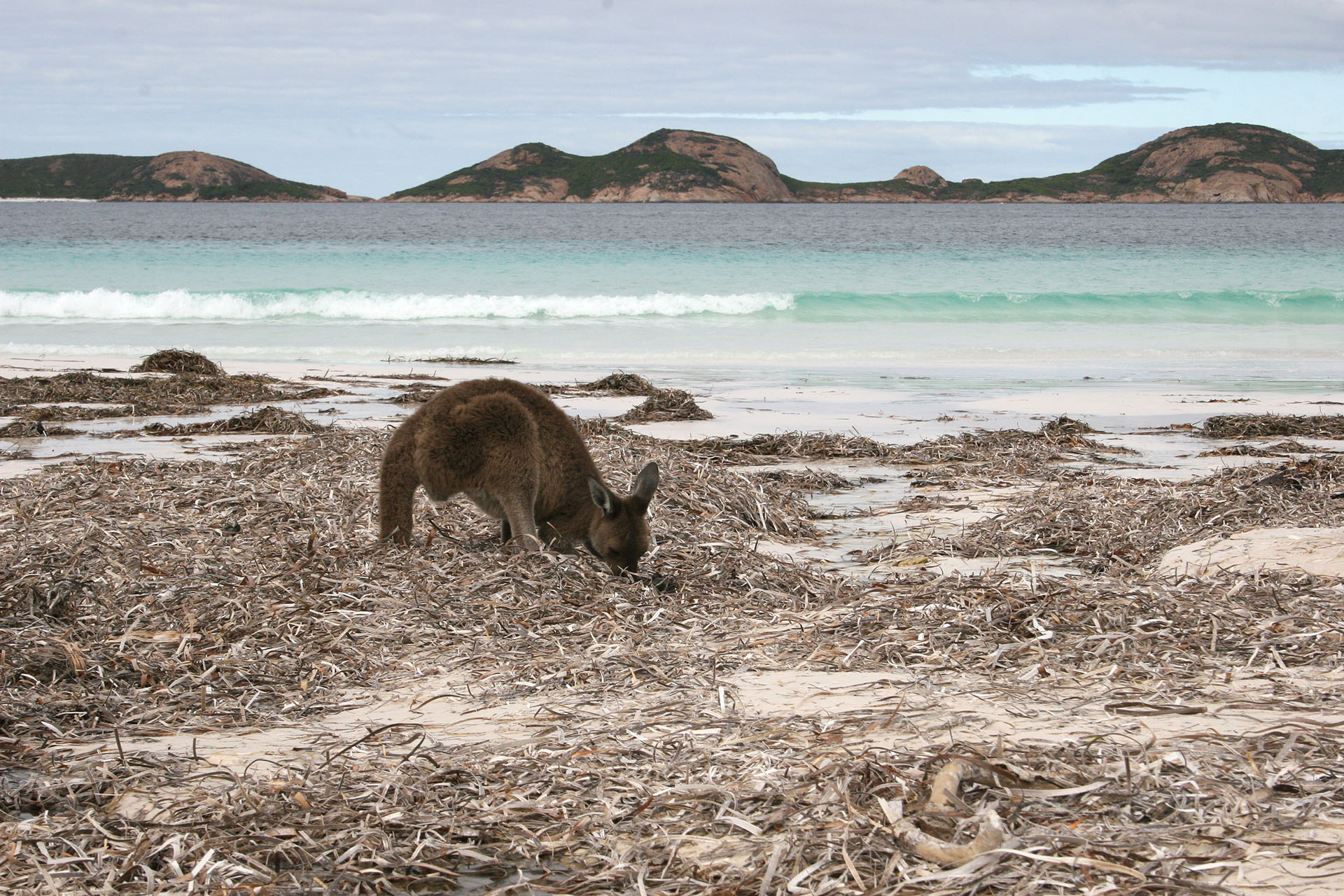 The marsupial eats its seaweed calmly, not paying attention to the noisy photographers – like George Clooney in McDonalds. Finally I get my chance to take the picture of the animal away from the crowds and drive off towards another beach, on the other side of the cape. It is also quite beautiful, even though just as crowded.

Another lucky shot with no people in it.

Having had my share of beaches, I drive back towards Esperance. Among the hills nearby there is one that is especially prominent: it's called Frenchman's Peak (Frenchmen again!) and looks like a gigantic hat. According to the signs, the hat is very much climbable, but I have no time at this stage. One hasty snapshot from the window of my car is enough. 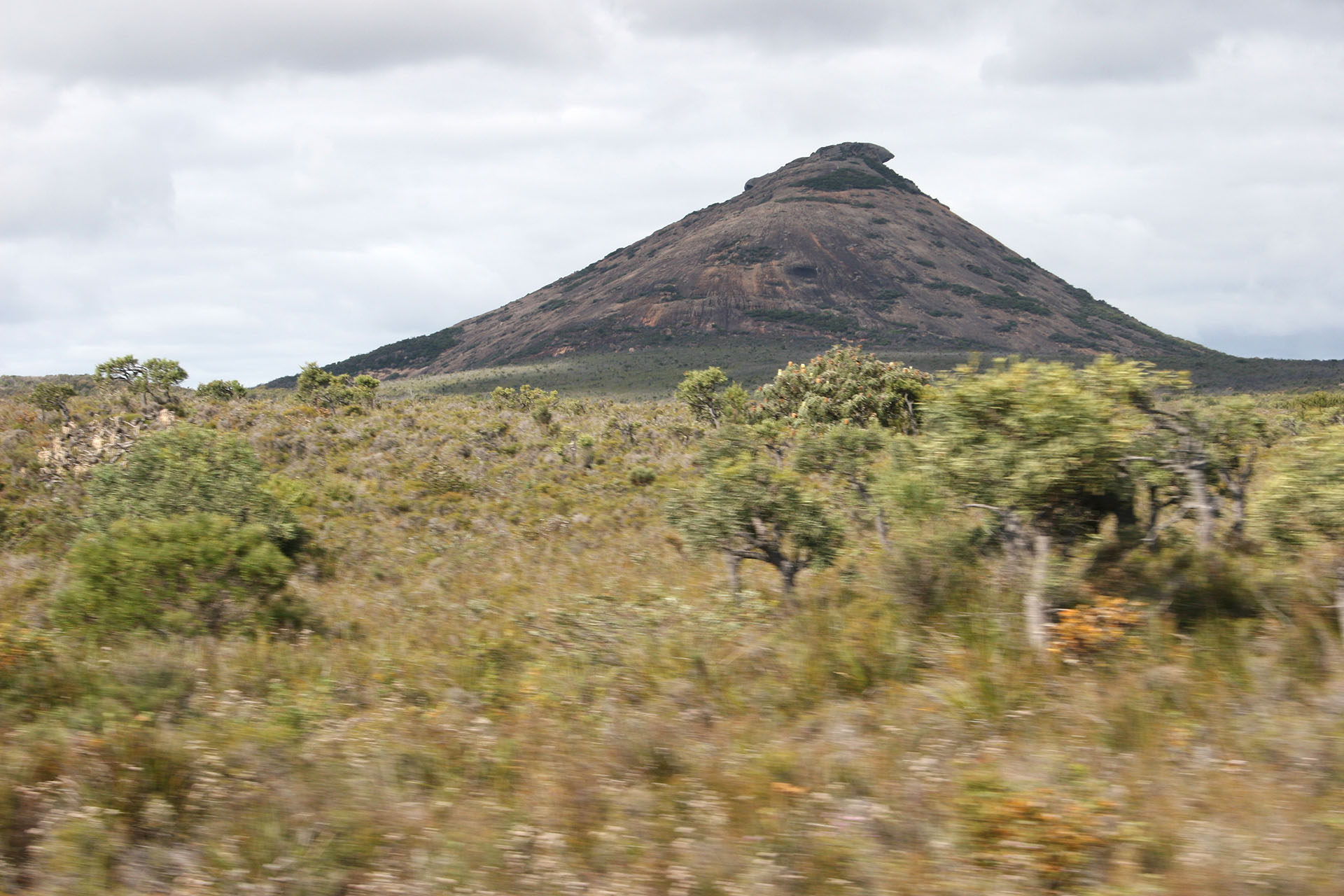 As I get back to Esperance, I notice another highway that leads in the same direction that I'm going to, which is called Great Ocean Drive: a sibling of the Great Ocean Road? Might as well take a closer look. The drive is indeed very picturesque, zigzagging along the coastline. Some bends are so sharp that I can only see the surrounding beauty with a corner of my eye. 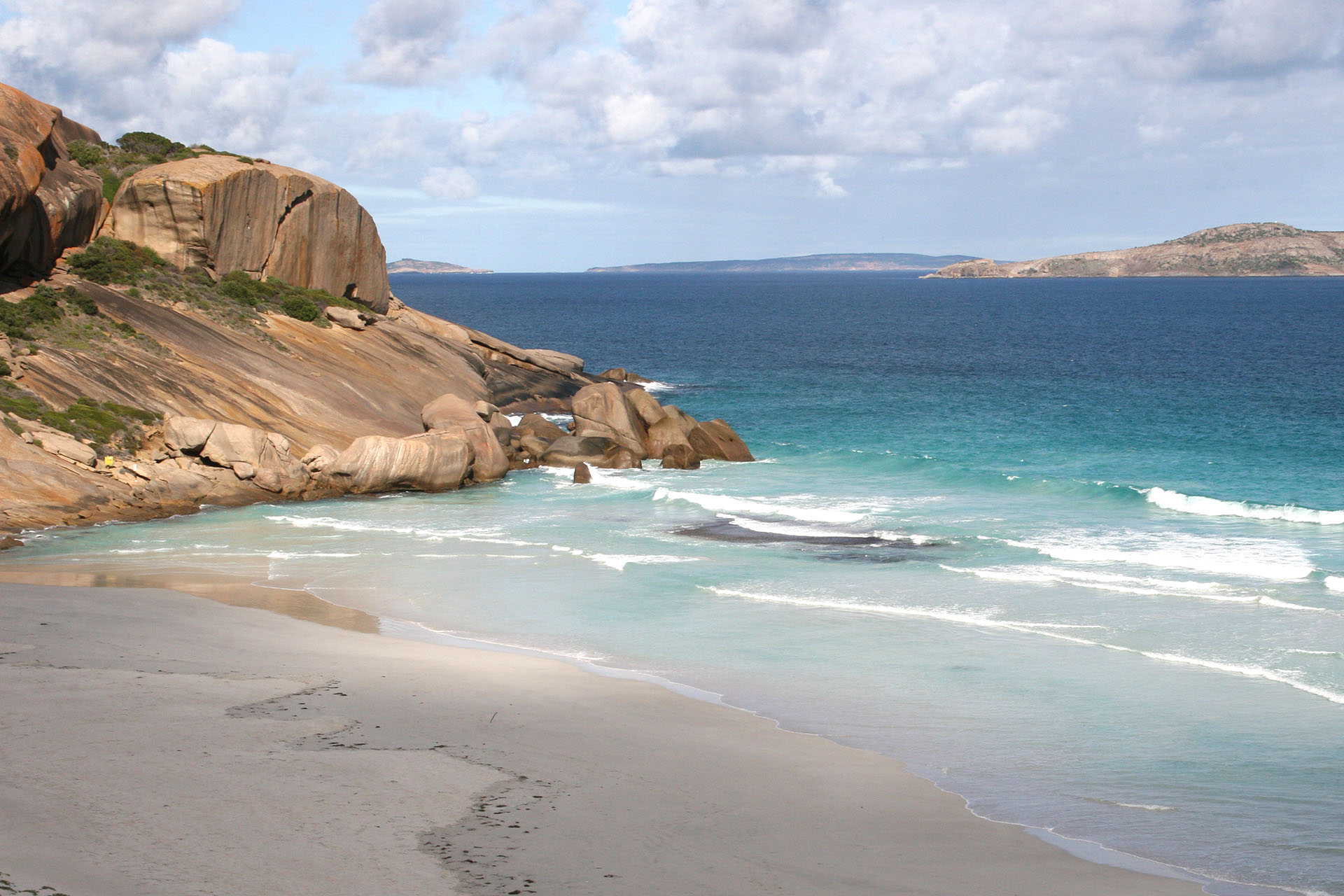 Cool-looking rocks along the coastline. 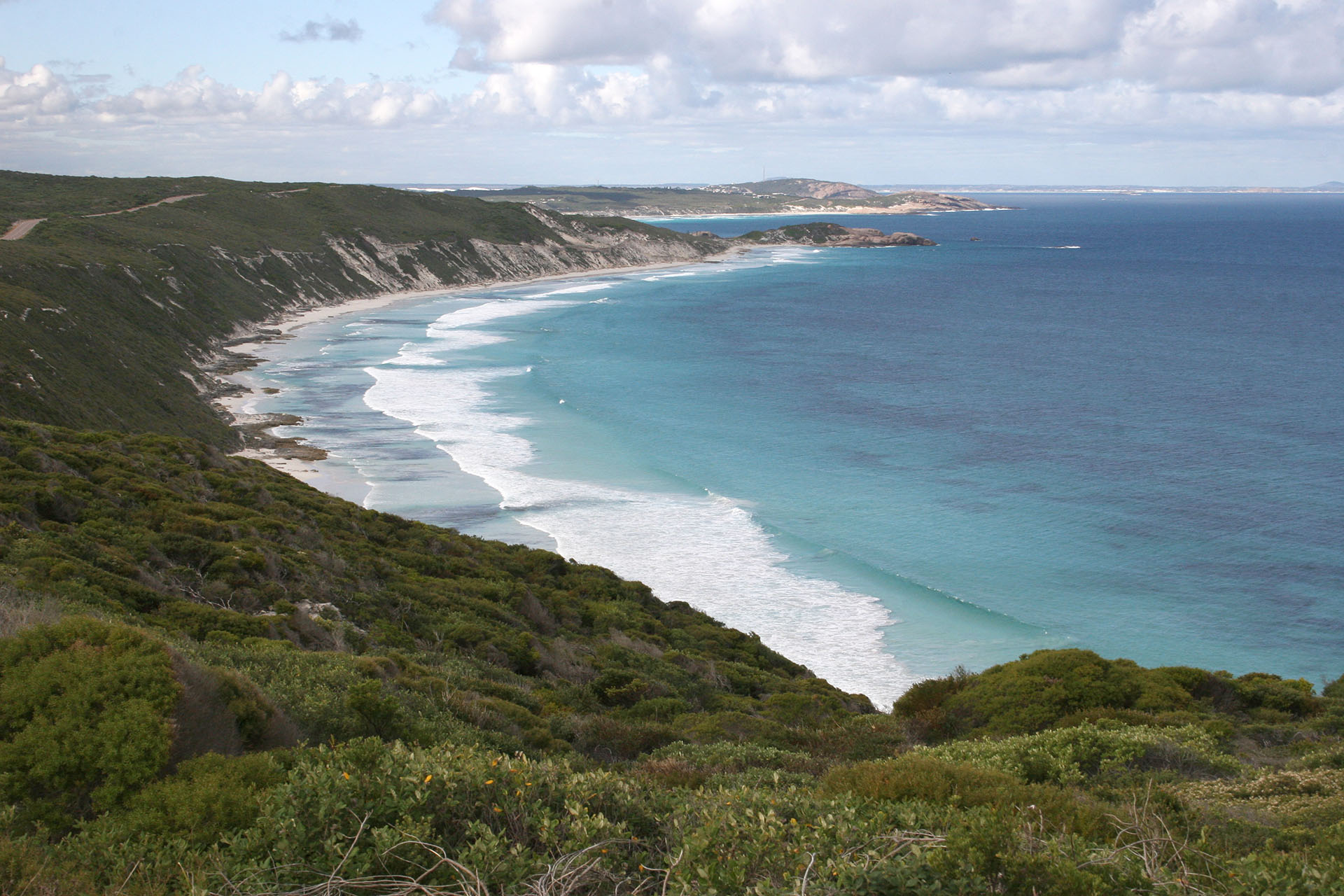 Esperance itself is still visible far behind.

Somewhere along the road there is a so-called Pink Lake that I wanted to take a look at as well. Unfortunately, the timing is bad: the sun is straight in front of me, and the resulting glare gives me no possibility at all to see the aforementioned pinkness. Oh well. Got to move further, then: to the Fitzgerald River National Park.

The road to the park takes me off the highway towards a small town called Hopetoun (yes, it's “toun” and not “town”: go figure!). While driving, I think about the possible reasons behind my “panic attacks”. I come to the conclusion that it's simply a sensory overload: too much to see and to process, and my tired brain desperately needs something familiar to wind itself down. Not sure if it's true, of course, but sounds plausible so far.

Sun is setting rapidly as I finally arrive to the park and pay the fees. Two of those: a day pass for the park, and a camping fee. The former can be paid by card; the latter only accepts cash in an envelope, and I seize this chance to dispose of a handful of change. Quickly I choose the place, put the camp up and take a quick walk around while it's still daylight. I can't say that the surroundings inspire me very much, but there's a very formidable mountain on the horizon, which is apparently where I'm supposed to go tomorrow. 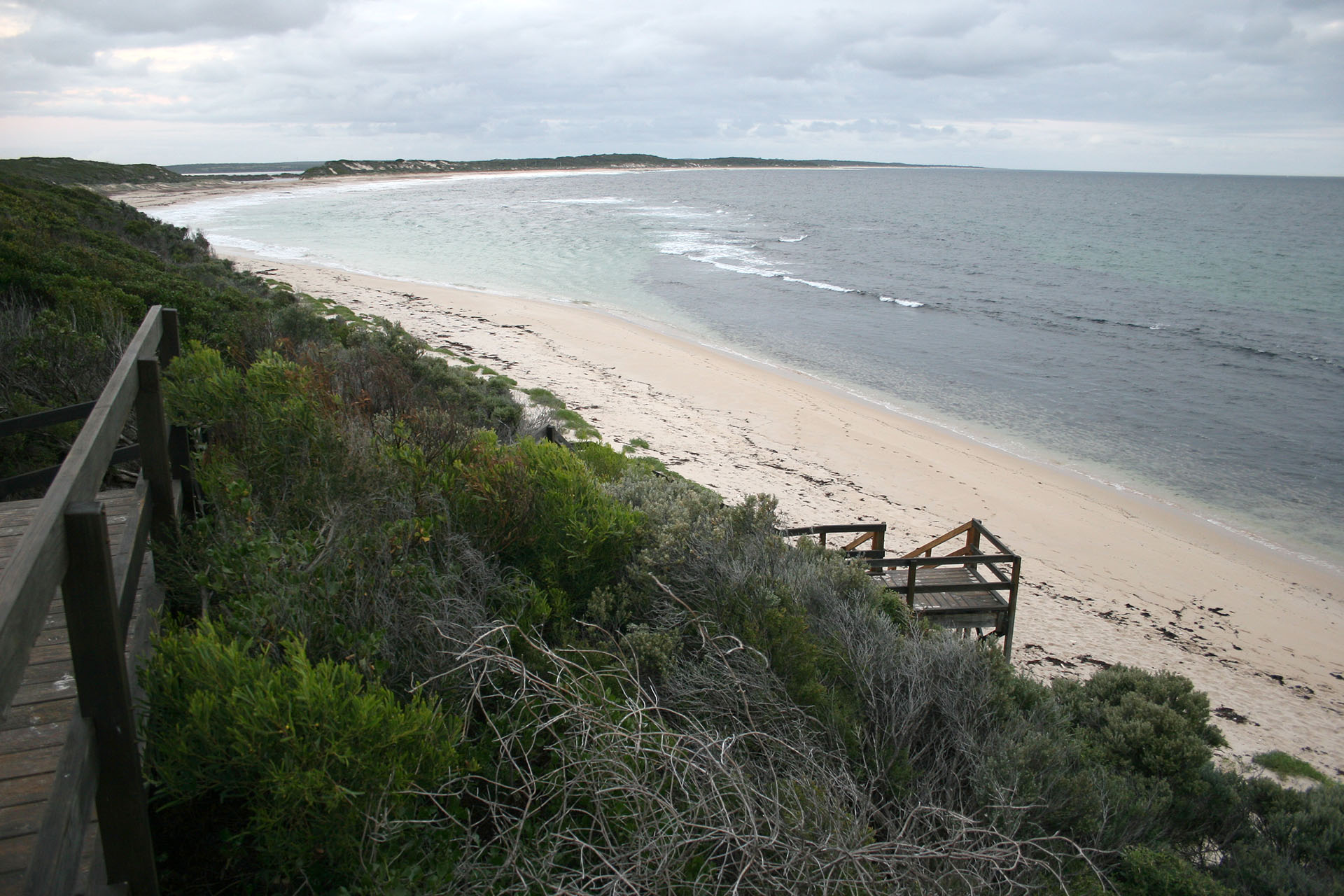 It's gloomy in the evening on the beach.

The campground looks very nice. The spots are quite level, separated by vegetation, and there's a few more private spots with narrow winding paths leading to them. I'm not seduced: too far away from the car, and there's not too many neighbours anyway. Despite the fact that I swore not to sleep near the sea ever again, the wind doesn't seem to be too horrible, so I hope to have a good sleep anyway. We'll see. 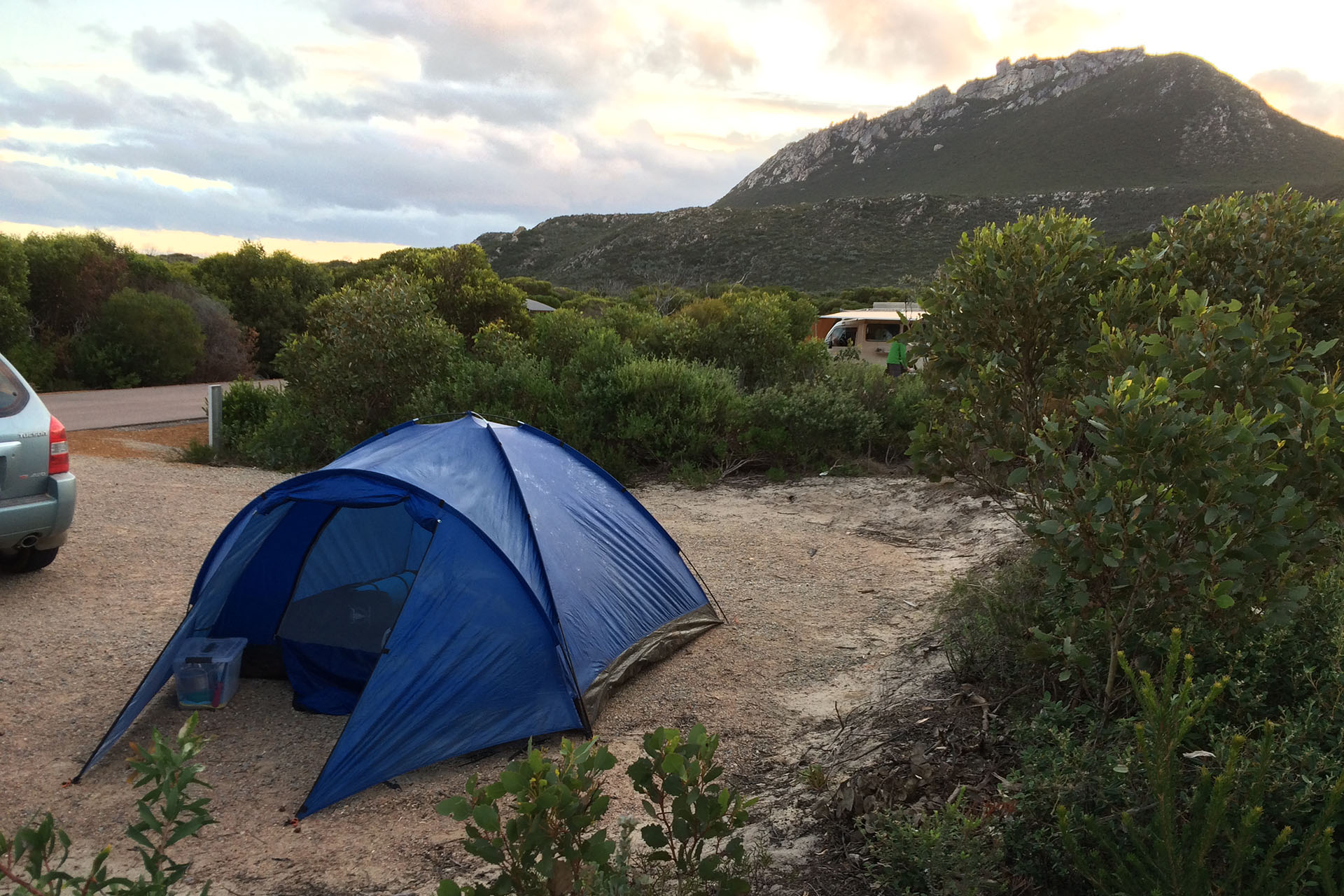 Wet patches on the tent are still there since morning.