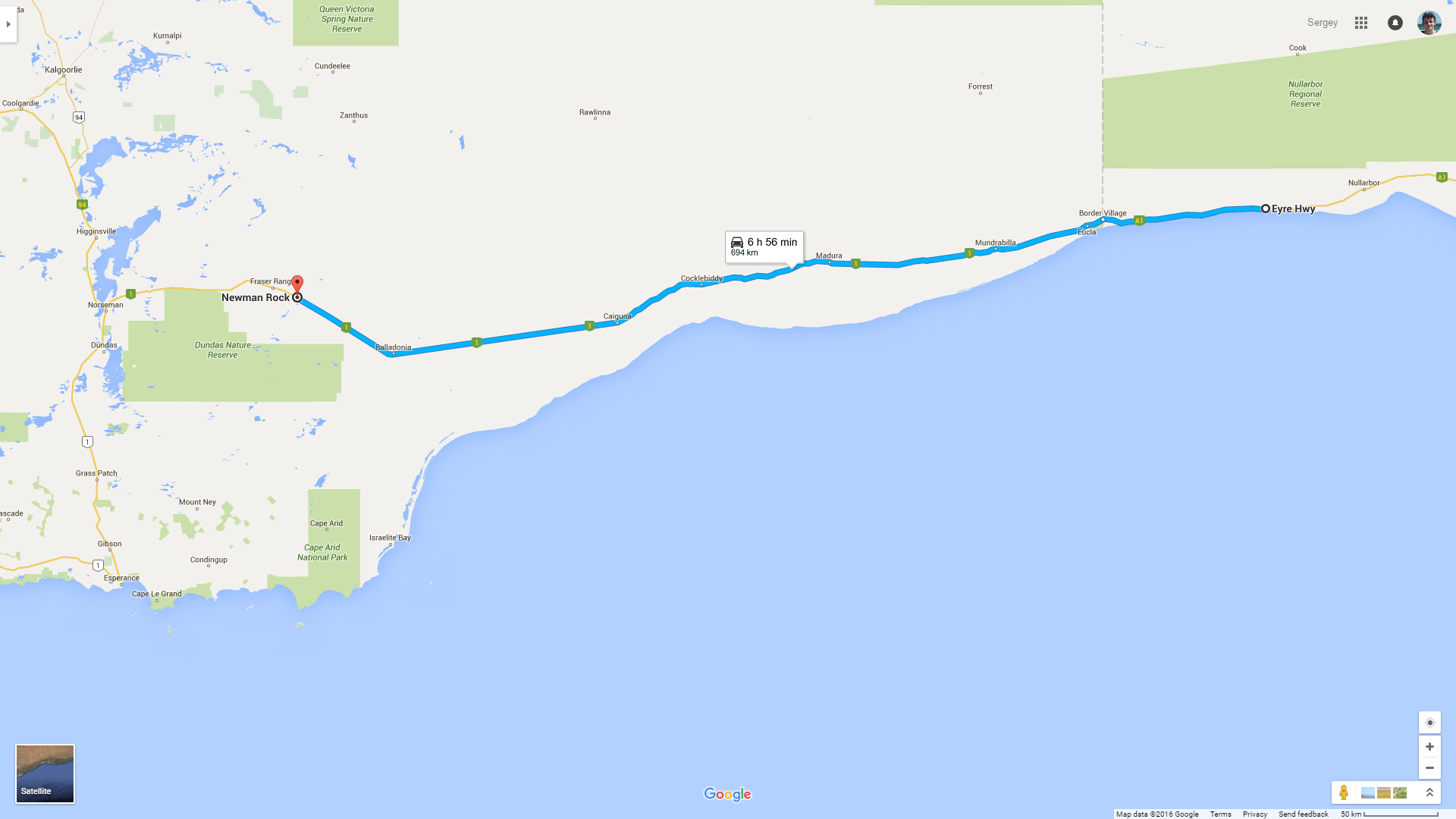 Sleeping amongst the dunes turned out to be a lousy idea. It's quite chilly, and the moisture gets condensed on the inner walls of the tent; with each gust of the cold wind the tent shakes, and the water drips on my face. Once again I wake up before dawn and spend the rest of the night sitting in the car and shaking in cold. No more camping next to the sea!

Finally, it's more or less bright outside, and I take off. The sky looks gloomy, and it starts to drizzle after a while. About time I packed up! Now the rain is useful, because it very conveniently washes my already dusty Tucson. Contemplating the morning gray landscapes, I finish the rest of my bananas and apples while driving: the state border is ahead, and fruits and vegetables are not allowed to be taken beyond. 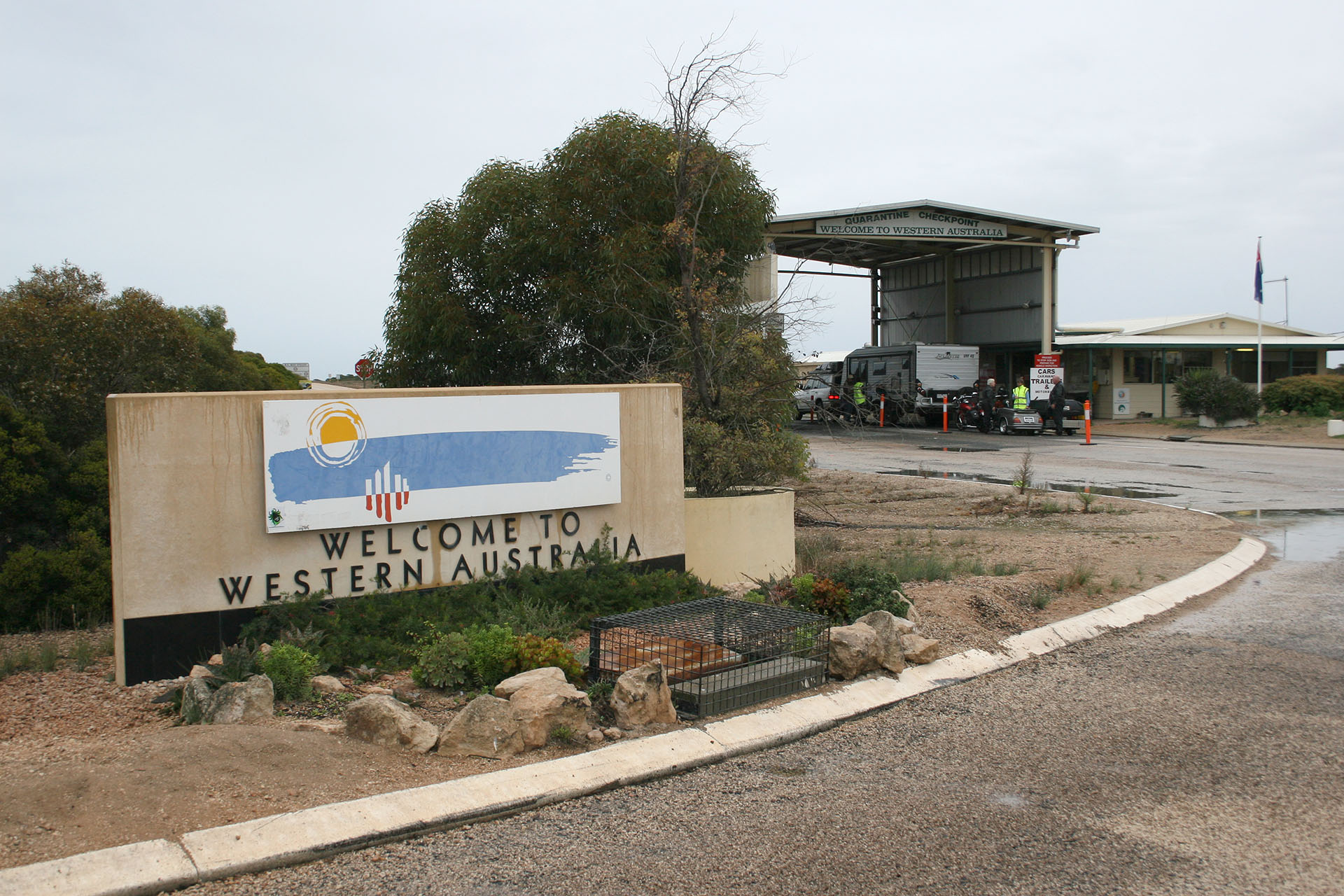 And here it is, the state border.

The place is furnished quite sparsely: a quarantine check point, a fuel station, a shop, and a caravan park with a motel. Nothing else. Next to the shop I suddenly meet Nicolas and his travelling mates: they camped a bit further down the highway last night. I refuel (the price bites!) and slowly head towards the check point. A nice young woman in a fluorescent jacket asks me politely, but firmly to open the boot and the glove compartment, and also takes a brief look at the food in my crate. Very serious approach. Finally I'm given the go-ahead, and I enter Western Australia. The landscape begins to change slowly, but it's still the same Nullarbor around, no matter where you look. 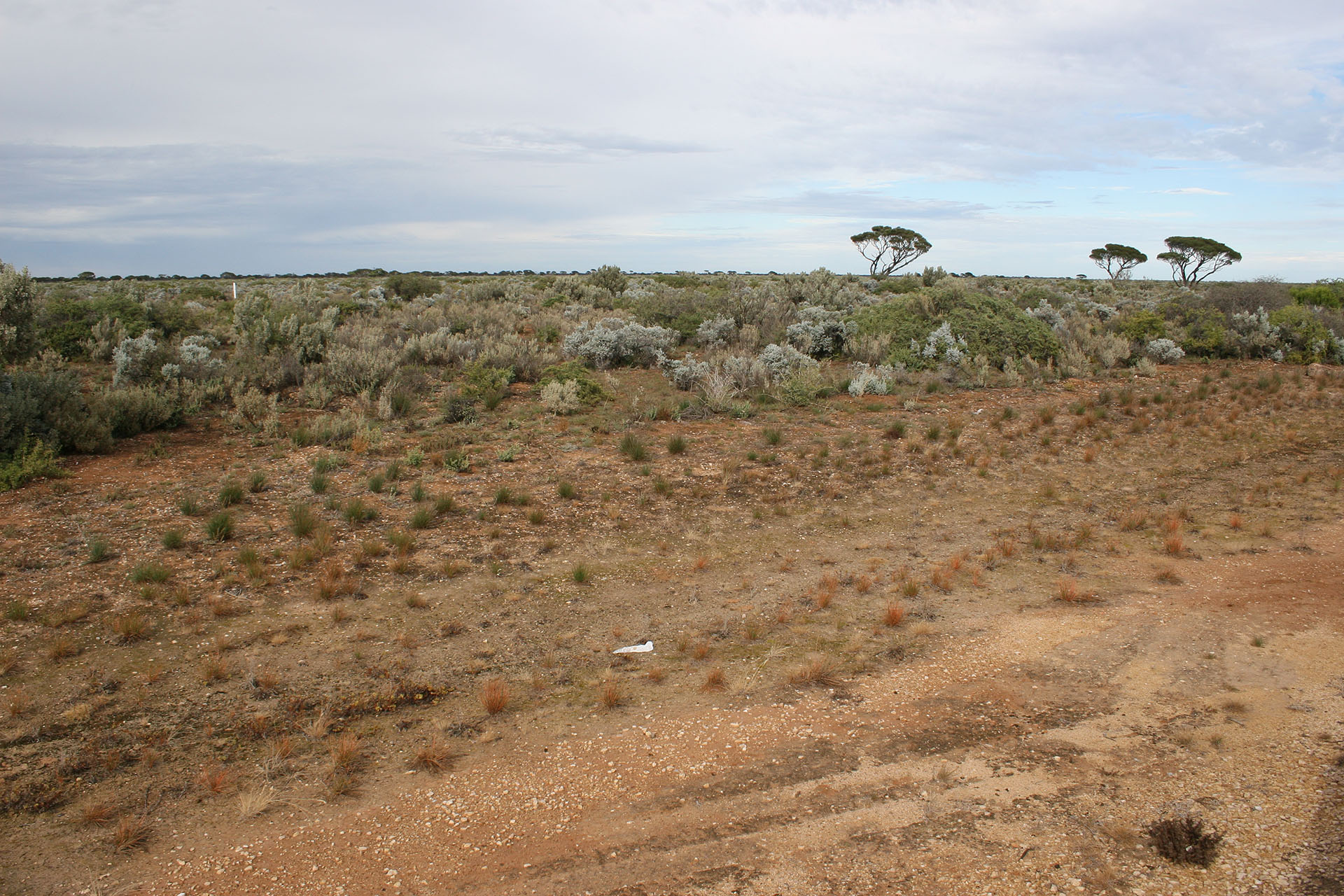 The day is getting warmer. On one of the rest areas I stop and change into shorts, looking with disgust at the garbage scattered around. People are people, no matter where they are. While I do so, a few campervans rush past me: I had overtaken them earlier. Campervans (or any other trailers) are not allowed to do more than 100 km/h in any Australian state, so overtaking them every now and again becomes a routine. 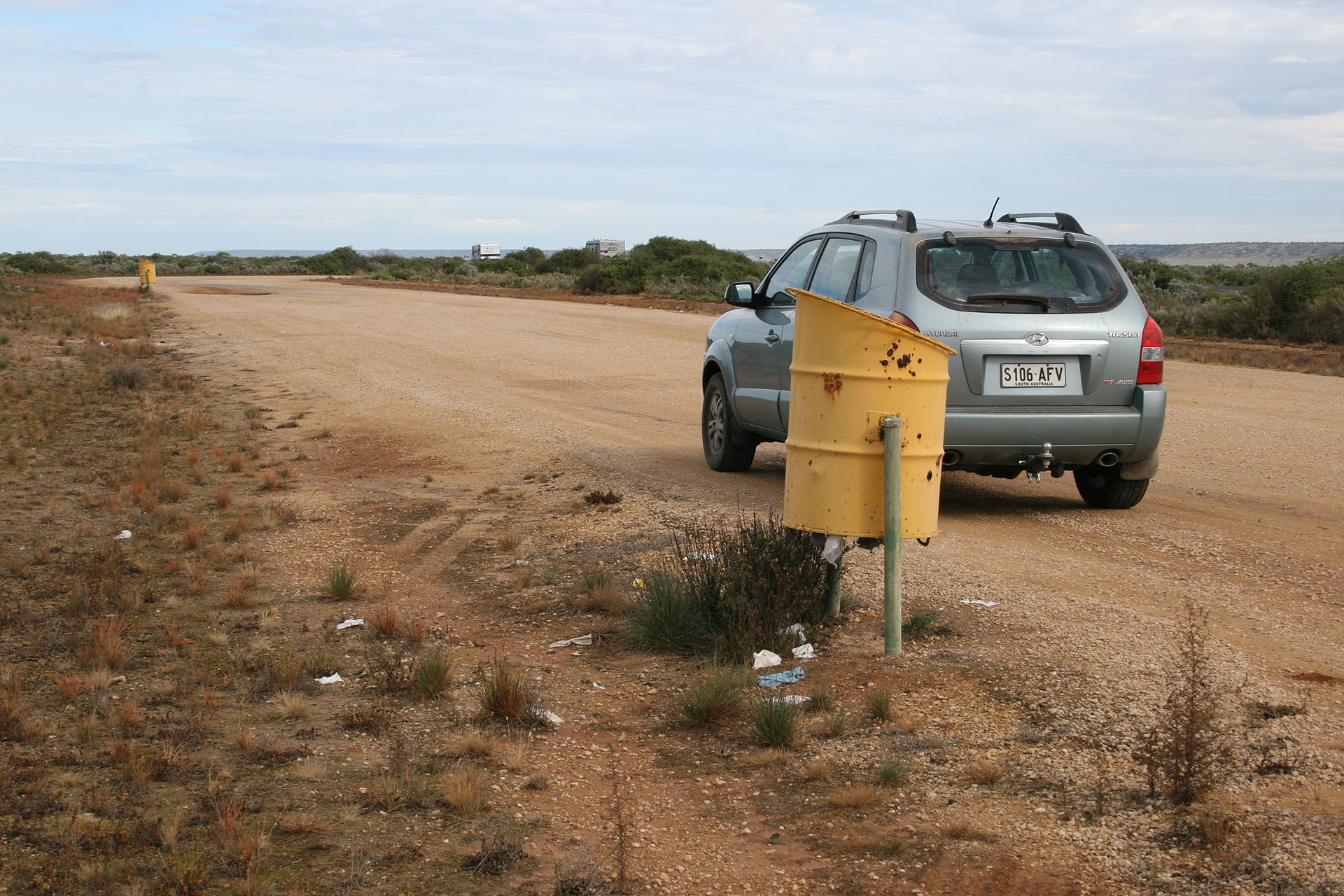 Driving on. More and more trees with each kilometre. Nullarbor must definitely be renamed into something more appropriate. Every now and then I see the landing strips marked right on the highway: they're there for the small planes of the Flying Doctor Service. Every time I pass these landing strips I think about how pilots are supposed to negotiate the traffic when they have to land on one of those. But then again, traffic is too big a name for a few cars passing by every now and then. 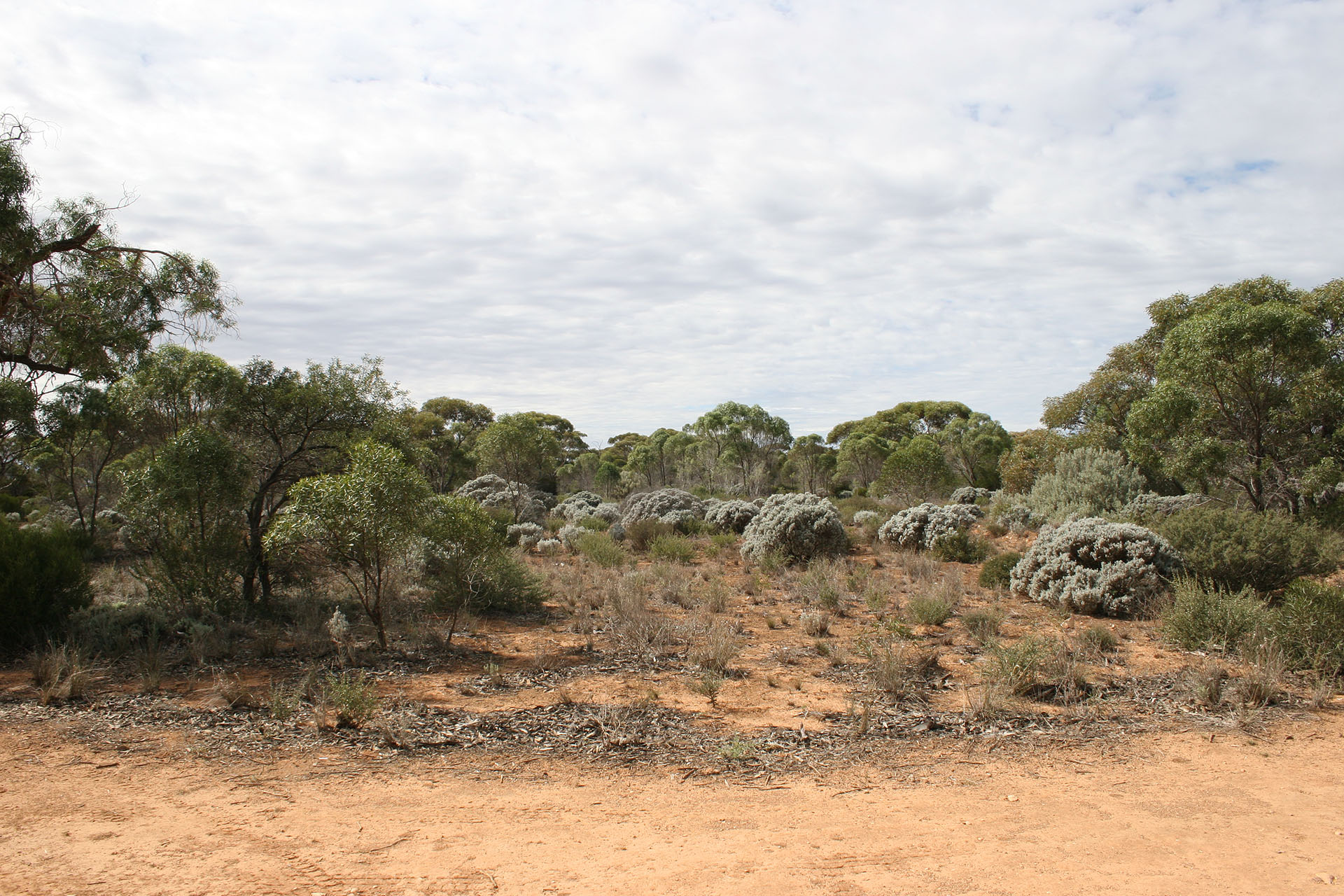 More trees on a “treeless plain”.

On the left I see some low ranges; then the road heads towards them, and then across them, and on the pass there is the Madura Roadhouse: “hub of the Universe”, as the road sign cheekily states. There I stop to have my lunch… and meet Nicolas again, who decided to have some coffee here. Is the guy stalking me or what? However, this turns out to be our last meeting, and we won't see each other again.

Further down the highway, beyond Caiguna Roadhouse, there is an ideally straight length of road 90 miles, or 146 kilometres, long. Miles are easier to pronounce, therefore the longevity of the non-metric name. 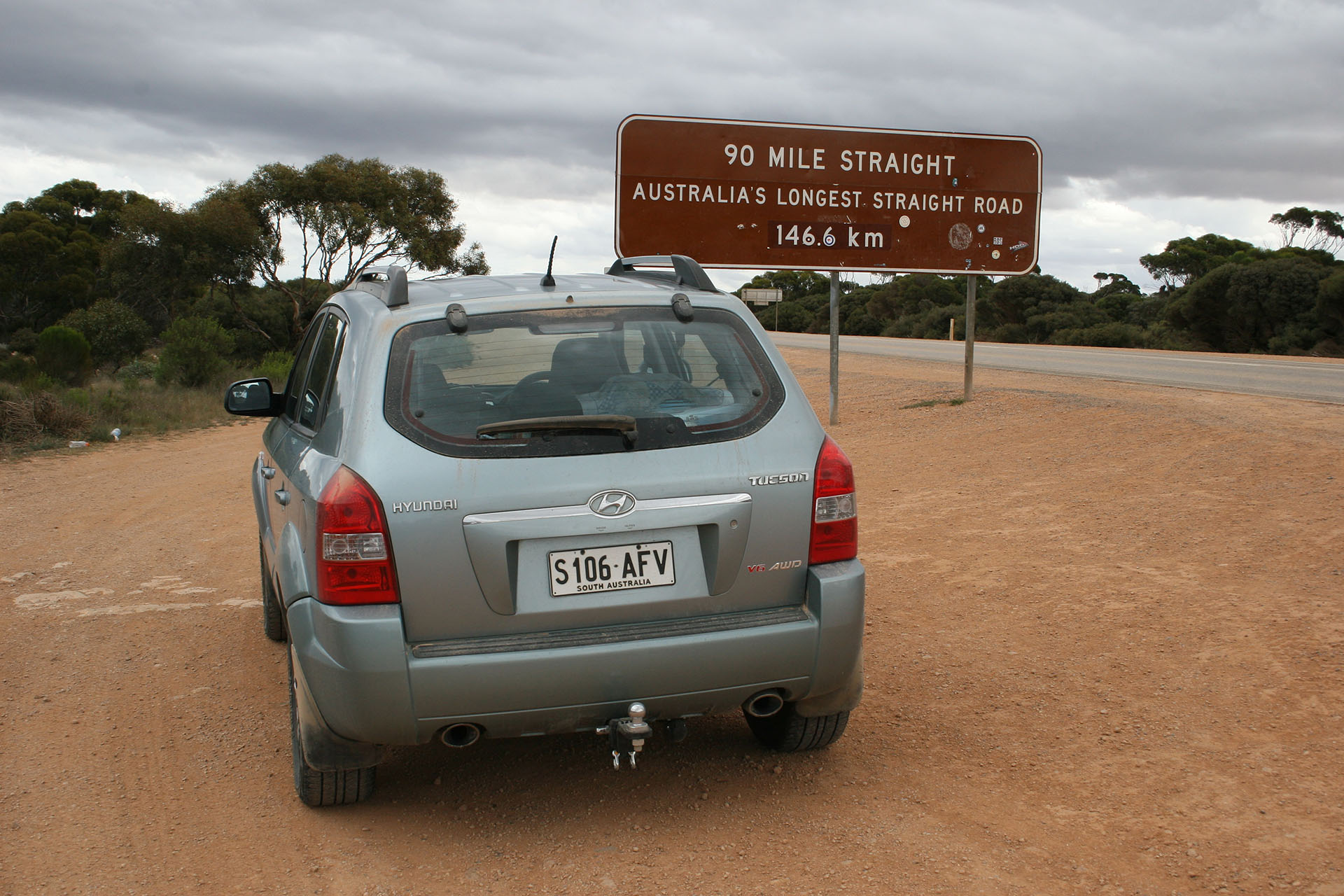 It is quite funny to travel along this stretch: no matter how long you think you're driving, it still doesn't end. Apparently, the fame of the place attracts odd people: I observed three cyclists and two pedestrians with some sign boards hanging on them. I drive too fast to make out what the signs say. Something about first world problems, probably.

However, as everything else in this world, 90 Mile Straight ends, and another region begins: it is called Great Western Woodlands. Looks like Nullarbor Plain has finally ended somewhere along the way, even though it isn't signposted in any way. The trees are everywhere now, and some gums have unusually bright, copper-red trunks. 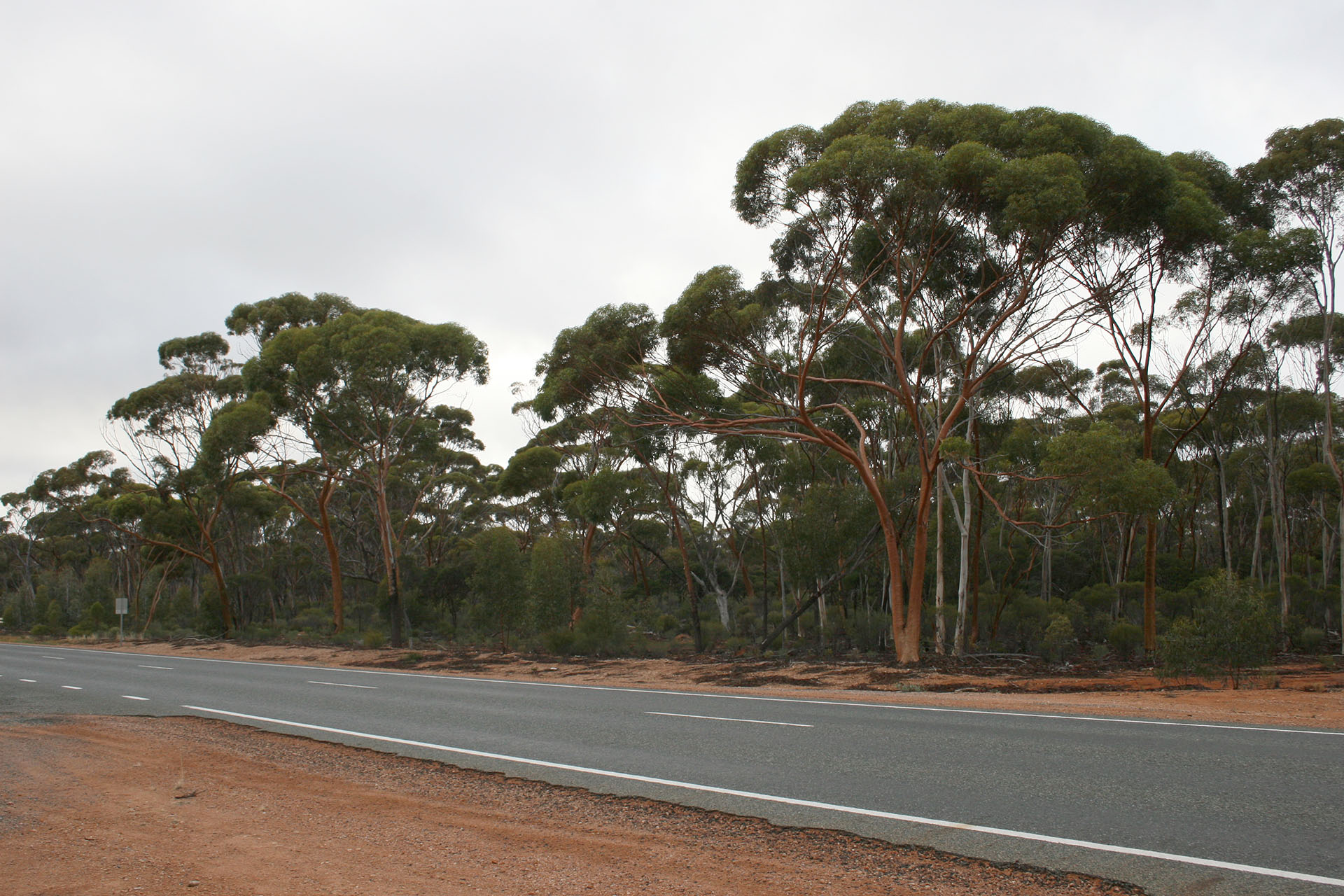 The local woodlands and the red gums.

The day, however, is slowly coming to an end, and it is time to look for another camping spot. I decide to get ahead my schedule a little and drive further than planned: Nullarbor looks cool, but there isn't much to see there, really. WikiCamps tells me that there's a place nearby called Newman Rock where I can stay for free, and the travellers' reviews are quite enthusiastic. I turn right, and a few kilometres of a very good dirt track later I'm there. 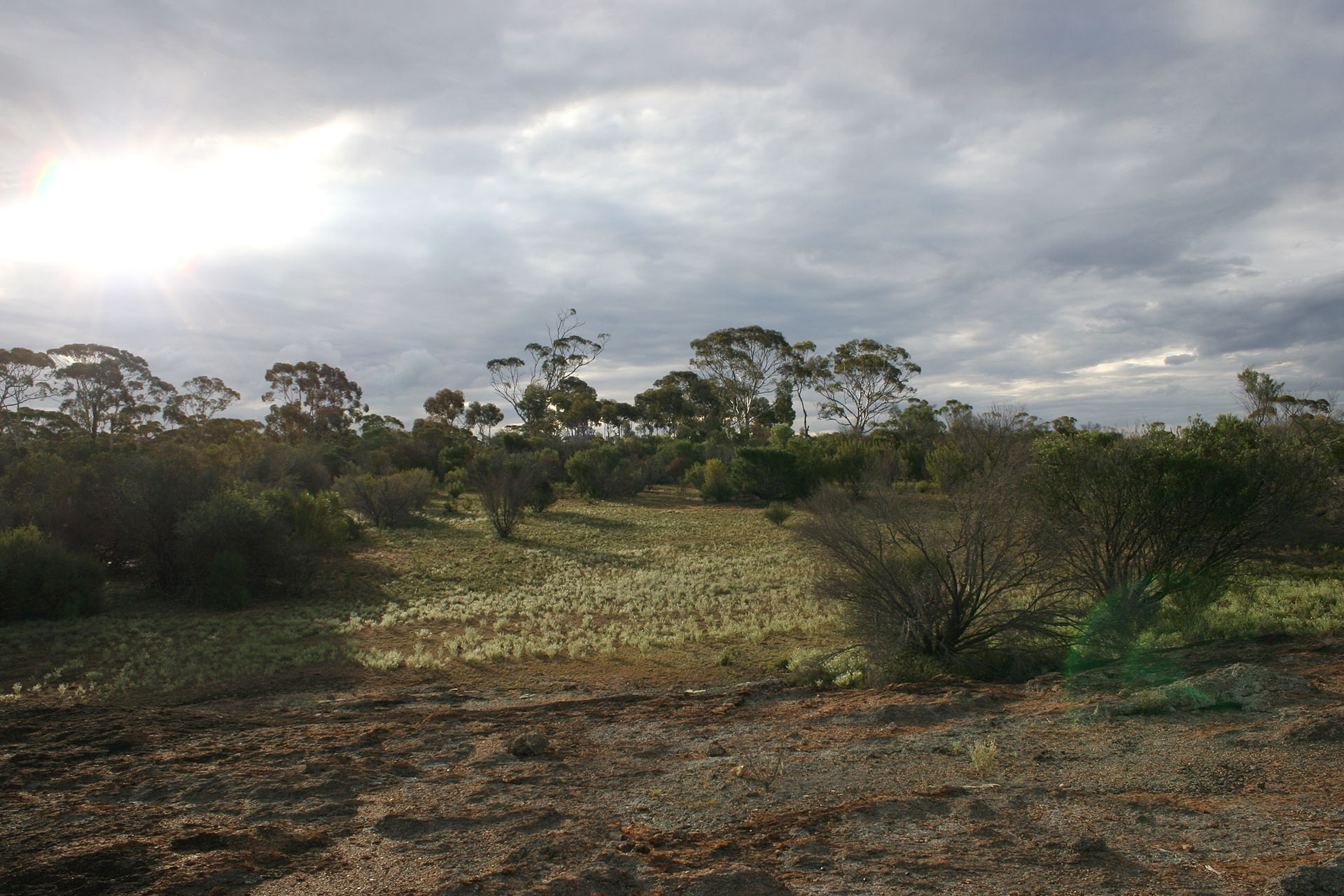 The place is beautiful indeed. A quiet forest, full of silence and humidity because of the recent rains, is a stark contrast to the sandy, windy coastline of the Bight. From the slightly elevated granite outcrop (the Newman Rock itself; it reminds me somewhat of Pildappa Rock), woodlands sprawl around as far as the eye can see. Nearby there's a small pond, and a bit of rain is still going somewhere on the horizon. 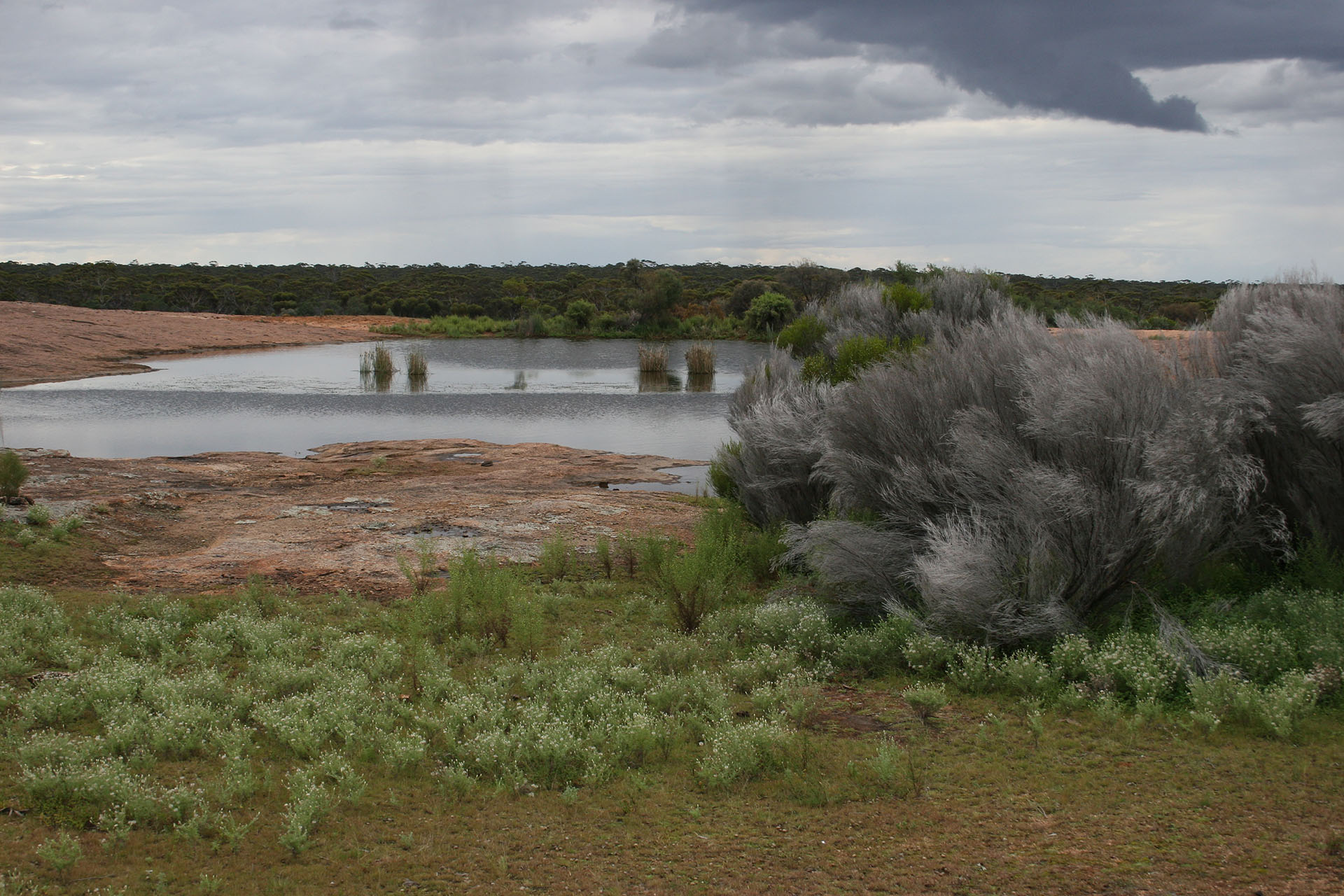 The pond is inhabited by frogs who can be heard distinctly.

I begit to set up my camp. Other tourists can be heard from afar, which calms me down a little after the lonely, nervous night on the Bight; it's comforting to be around people after all, even though I could easily find a quieter spot in this vast campground. I have my dinner quickly and go to sleep. The trip routine is slowly being established. 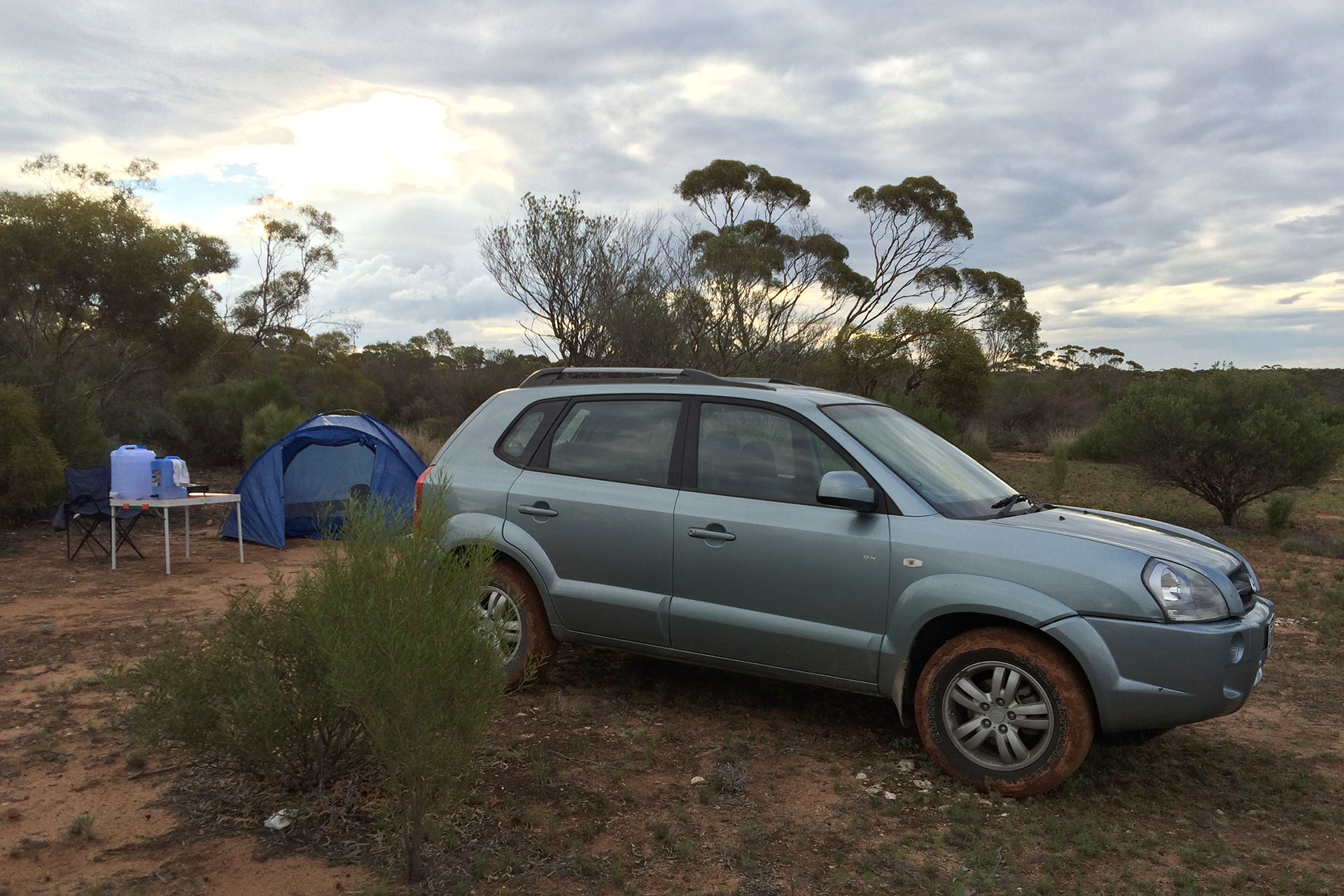 And no wind at all. Excellent.