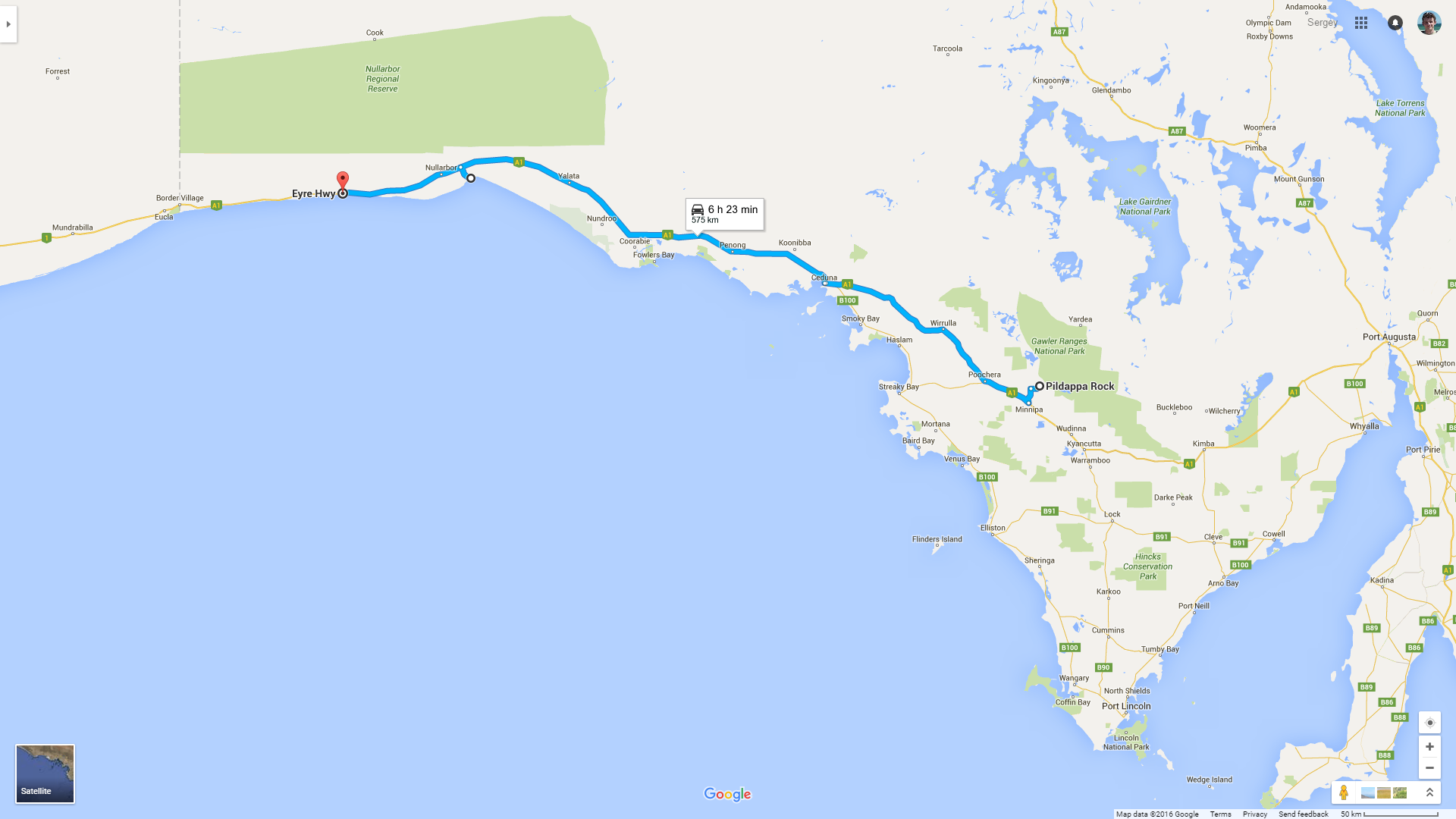 I went to sleep quite early yesterday, so I wake up at 4 a.m., no less. After having my breakfast (instant noodles) I decide, for the lack of anything else to do, to pack up my camp, but the decision proves to be wrong. Too dark yet, and too cold, and the light of the torch attracts too many moths. Humans weren't meant to be nocturnal, after all. It's not very pleasant to realize that in the darkness that surrounds you there can be anything at all, and that all your observable Universe is limited by the circle of the pale light from your torch.

However, the first night on the road can certainly be considered a success. The night was still and quiet, the new sleeping bag was warm and cozy, and the mat was also quite soft: for someone who can sleep on hard surfaces, that's as good as it gets. At the first rays of the sun I fire up my Tucson and take off. Along the road the landscape is the same: a bit monotonous, but still beautiful in its own understated way. 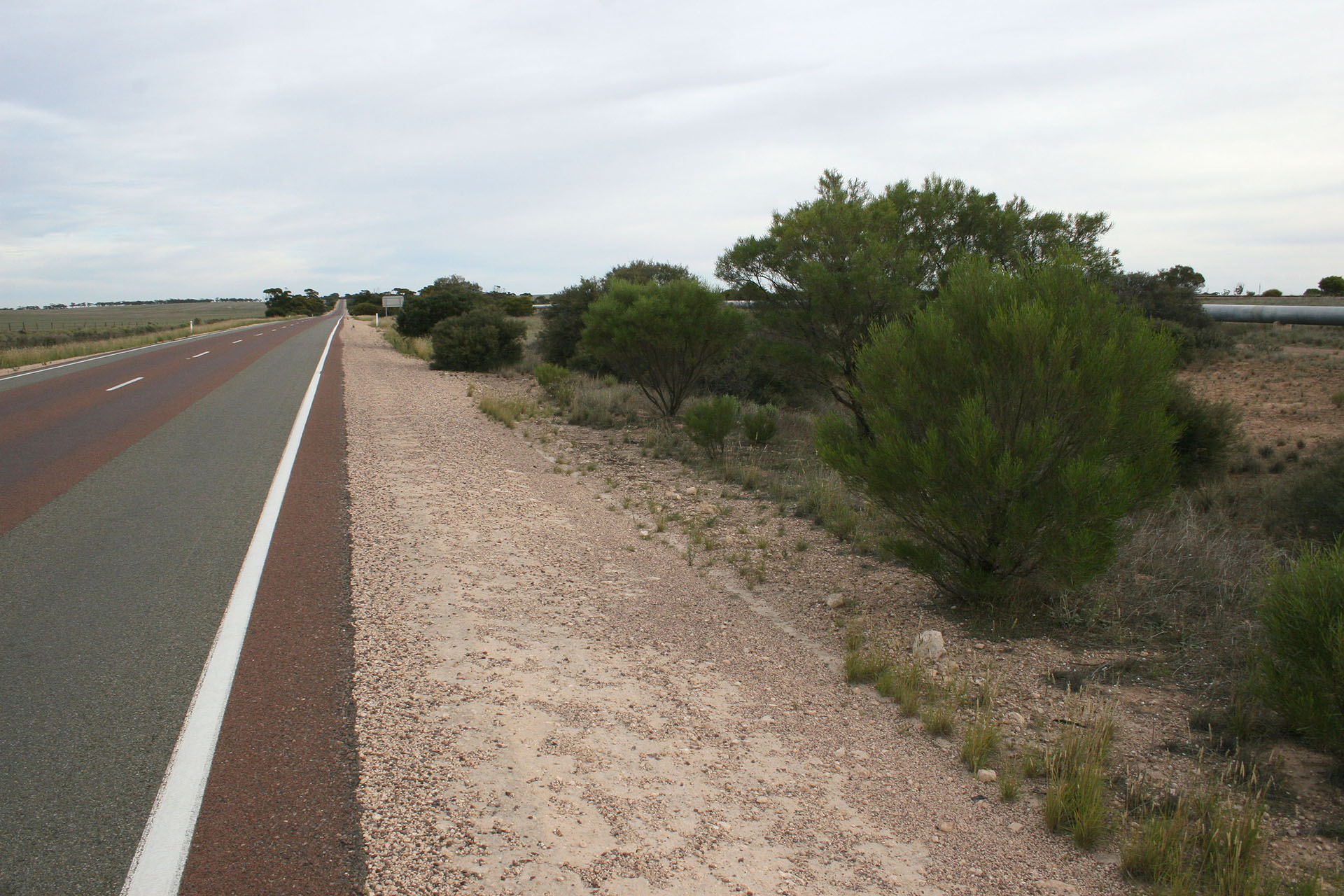 The highway is excellent. Almost all traffic consists of either road trains or camper vans; anything else is a rare exception. Along the road there are rest areas, where you can make a quick stop to walk around and grab a bite (if you carry something edible with you), or visit a toilet if it's there (which is quite uncommon). For all your garbage there are special bins installed at every rest area. 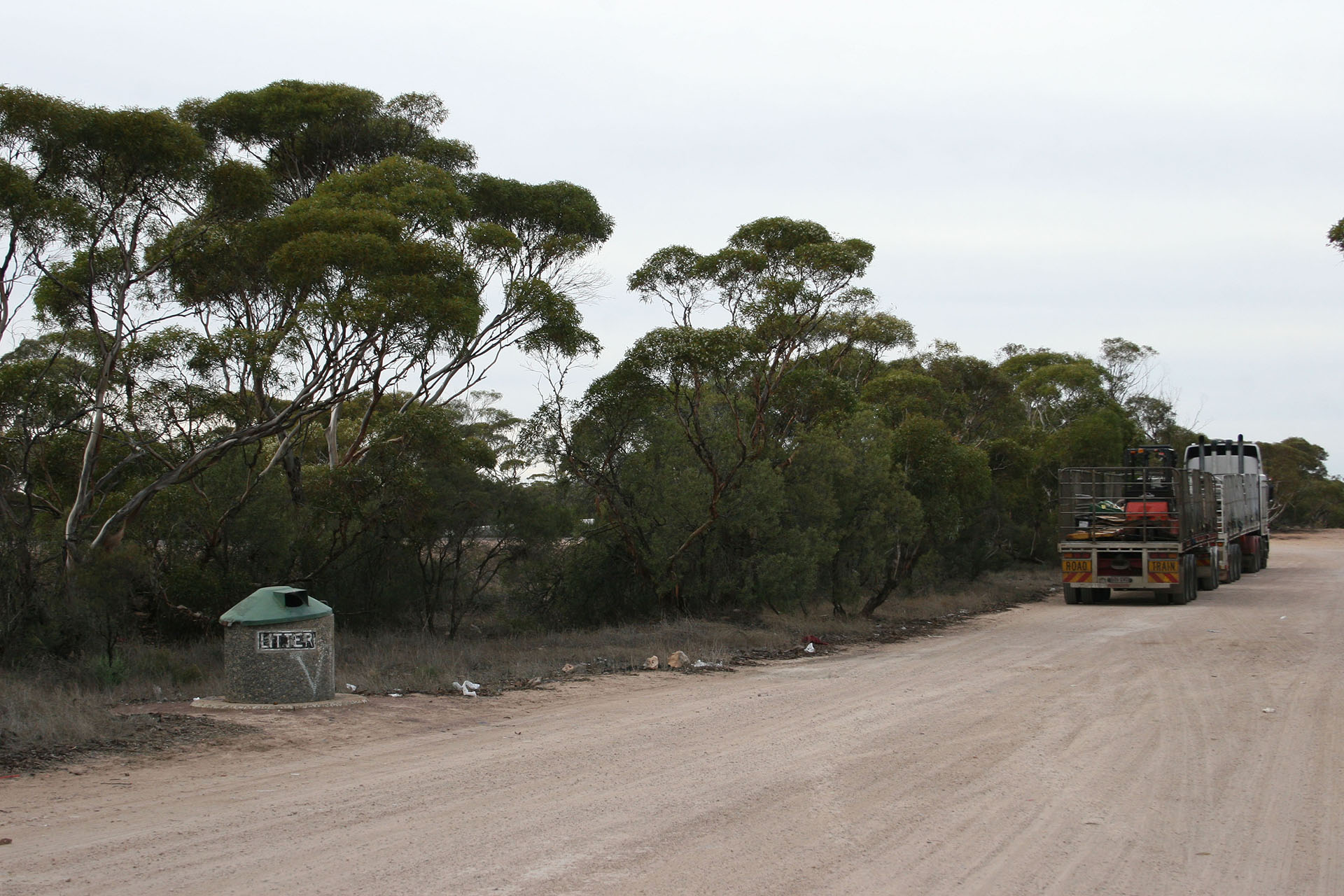 Next to the highway there's a railroad. The highway and the railroad are the only connection between the East and the West of Australia. The railroad sometimes moves away from the highway, sometimes comes very close to it. It's interesting to see a train rolling on the left or on the right, almost at the same speed as you are, that appears to be going straight across your way to slam into your car a moment later… only to turn at the last moment and drive alongside you in parallel.

Approaching Kimba, I see a “Scenic Drive” sign and turn right. However, I can't find any scenic roads beyond that, and after spending a few minutes on the quiet, desolate streets I return to the highway. While doing so, I snap a picture of a silo and a railroad next to it.

The rails and the silo.

My next stop is Ceduna, SA. The fuel tank is almost empty when I finally reach it, and the indicator is reproachfully amber: I'm conducting an experiment to see if one can travel at last 50 kilometres with that indicator on. The result of the experiment: at least 40 is a safe bet. I refuel and buy myself a new USB charger (the old one fell apart quite literally just a few hours into the trip). Then I start to look for a place to eat, and while doing so I visit the local beach. It is clean, tidy, and quiet: much like the rest of Ceduna, which looks like a very nice and pleasant town. I also take a quick trip to the port (its grain silo clearly visible in the distance), but there's nothing much to tell about it. 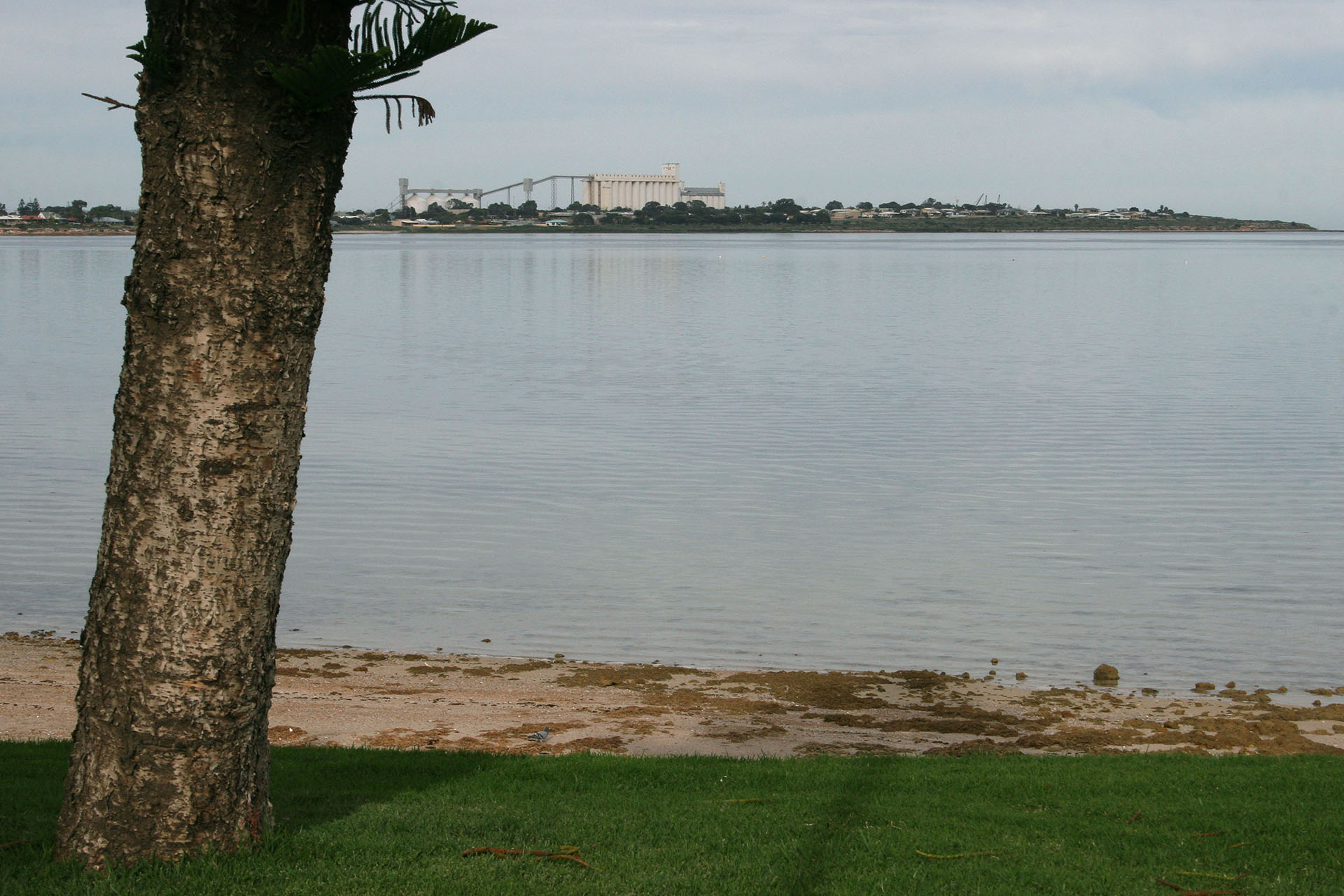 Ceduna beach, and the grain silo in the port.

Fun fact: Murat Bay, where Ceduna is situated, is called after the very same marshal Murat who along with Napoleon went to conquer Moscow in 1812. A bit weird to see such names here, half a world across from Russia, Tolstoy and War and Peace. Ceduna itself is a busy port and a fishing centre; fish and chips here are cheap, and portions are huge. I have to eat mine for the rest of the trip in separate takes.

Also, Ceduna is the last proper town on this side of the South Australian border. The next town is going to be Norseman, WA – 1,200 kilometres away. Between them there are only isolated roadhouses, cattle stations, aboriginal communities… and the legendary Nullarbor. 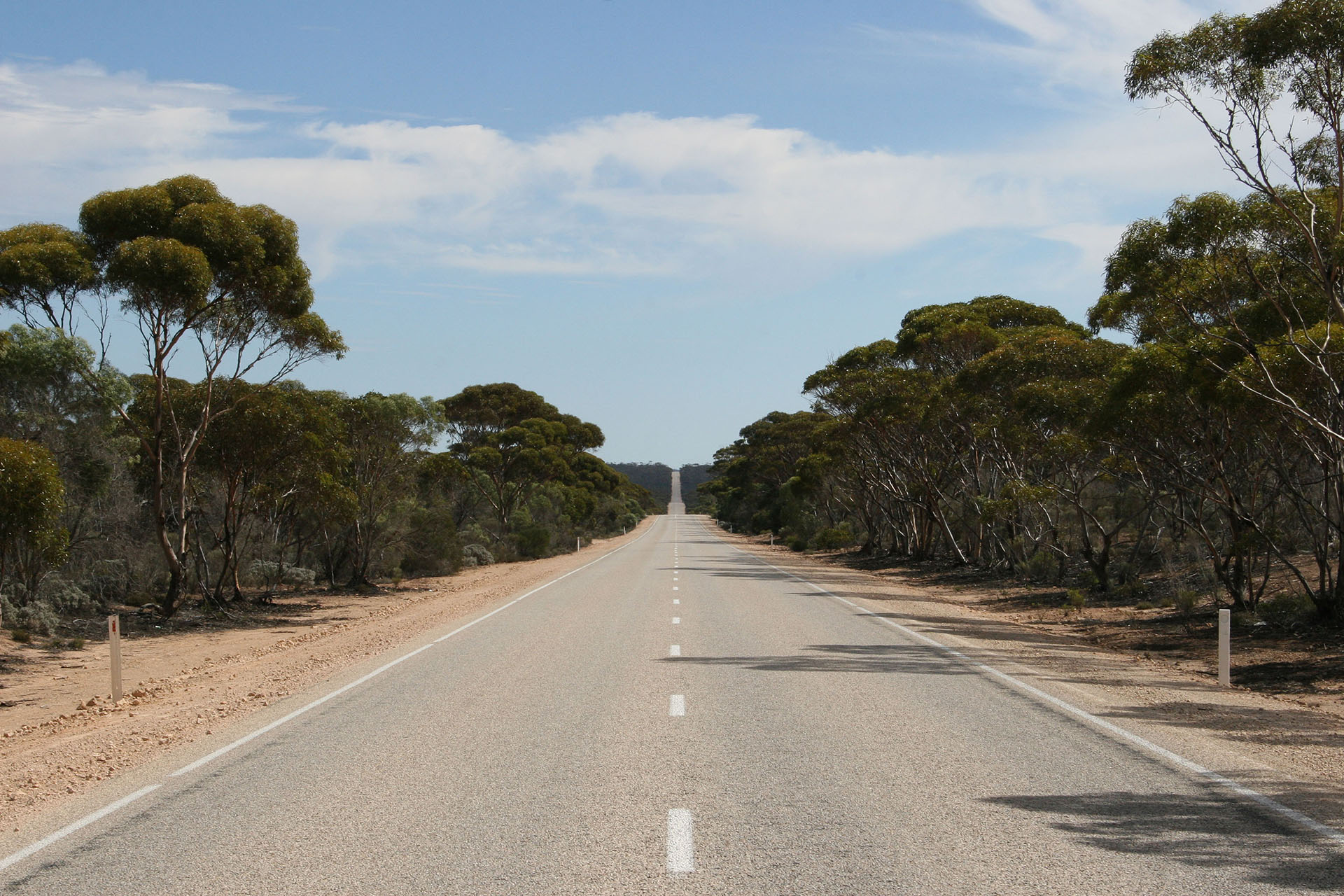 Road to the sky.

Roadhouse is a typically Australian concept. In the outback, where towns and settlements are few and far between, a roadhouse is very important. It is situated on a highway and has a service station, a small shop with food, maps, and souvenirs, and also a motel with a caravan park. Roadhouses are so important for Aussie motorists that on the road signs their names are just as significant as towns or cities. They are usually 200-300 km apart from each other, so if you pay attention to your fuel gauge and refill often enough, you simply can't get “dry” on the road.

As for the road itself, it goes on and on, and the landscape is gradually changing. Farms and pastures, still quite common after Ceduna, disappear slowly, replaced by the bush and gums that also grow like bushes, all at once from the same root. This type of vegetation is called mallee, and this mallee is going to accompany me well into Western Australia. 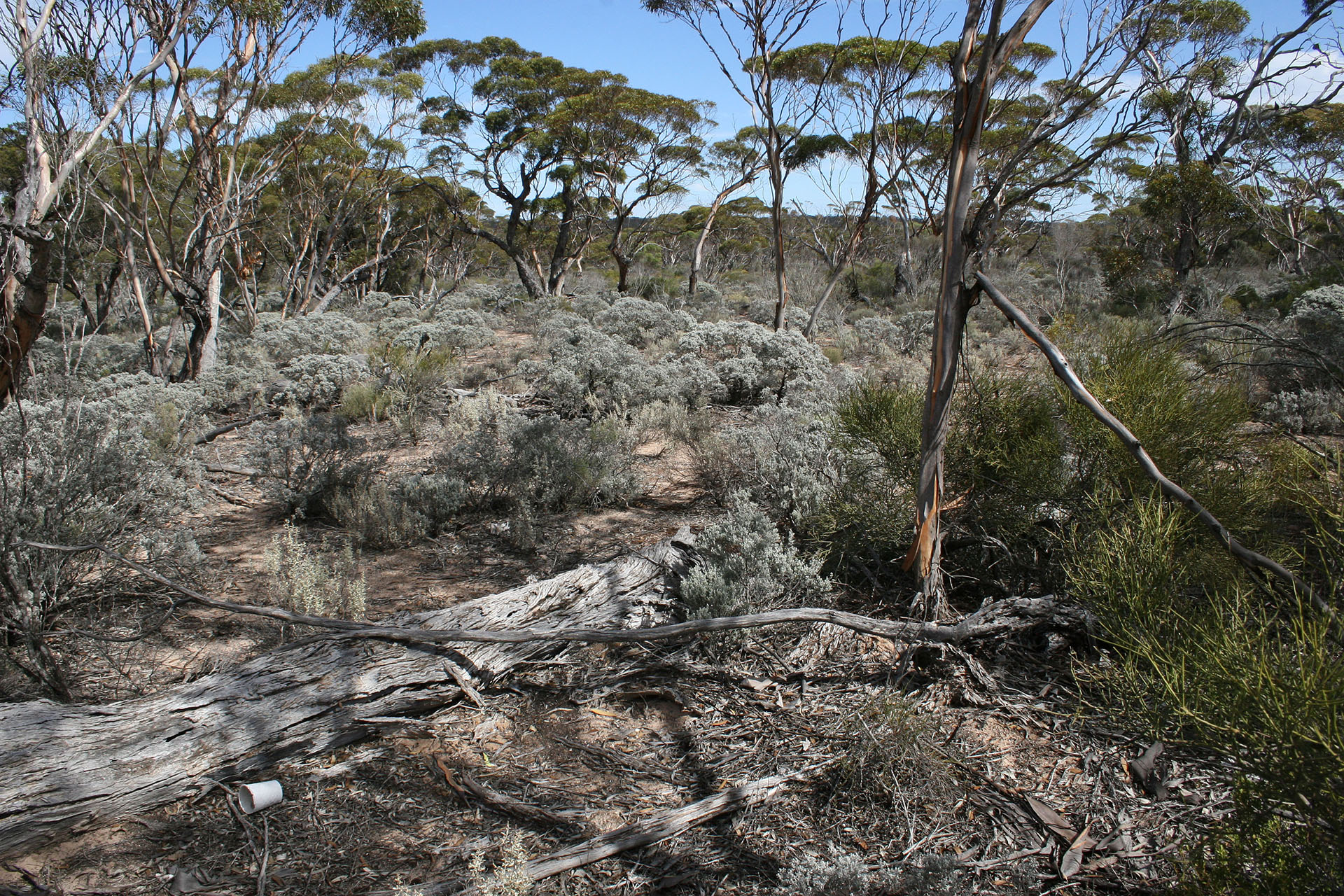 The Nullarbor itself is just a gigantic limestone plate, lifted millions of years ago up from the sea bed and turned into a giant desert plain. I was quite surprised one day to find out that Nullarbor is not a fancy Aboriginal word, like Ceduna or Minnipa, but simply Latin for “no trees”. Time to find out whether this statement is true or not. 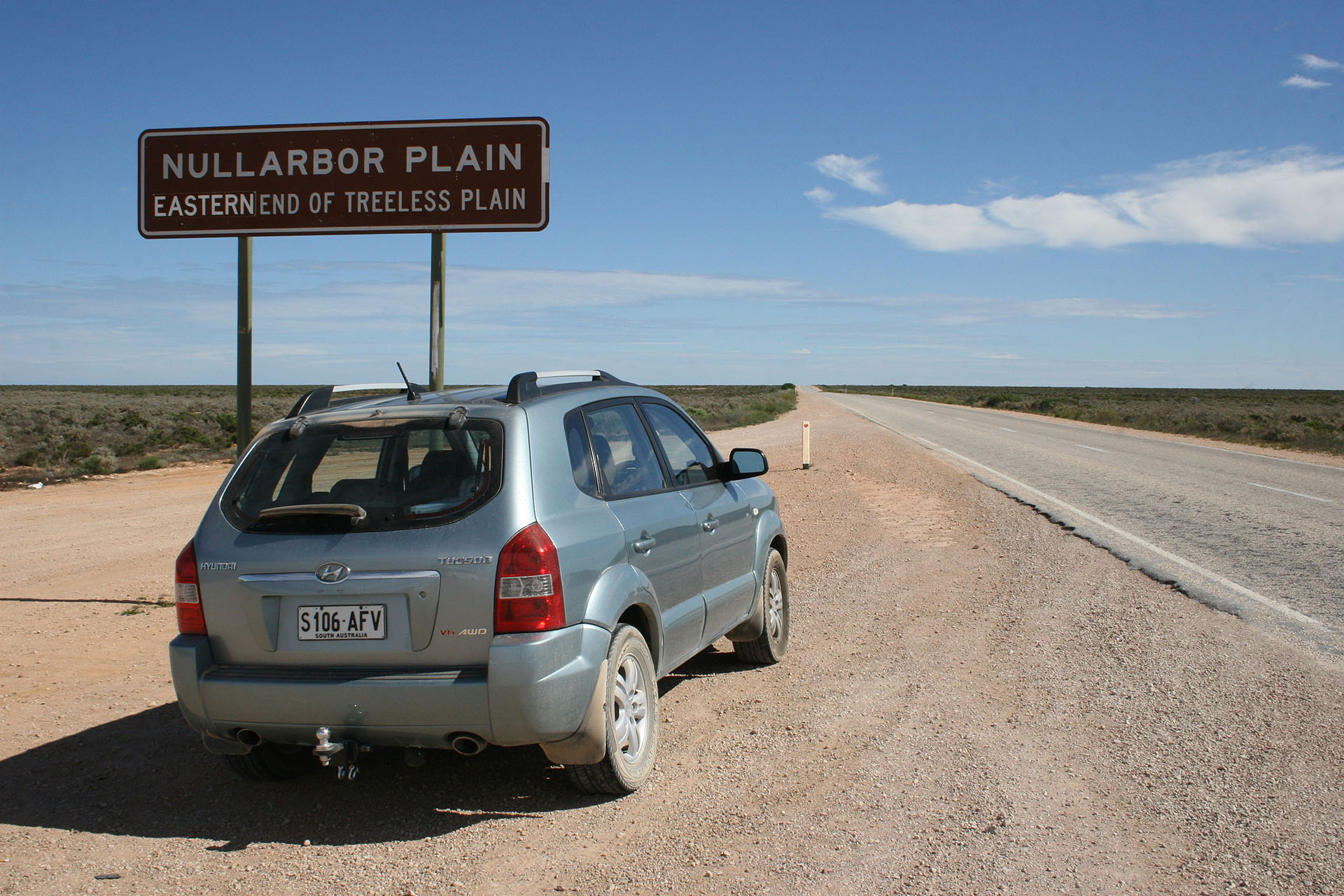 The etimology of the name is deciphered for the uninitiated.

At the first site, the Nullarbor is indeed quite plain and treeless so far. No pastures or farms at all: this is a national park here.

From the south, the Nullarbor is limited by a vast body of water called the Great Australian Bight. The highway travels more or less along it, sometimes coming quite close to the coastline. The northernmost end of the Bight is equipped with a whale observing spot, and having paid my $7 I get in to take a look. Nothing else beyond this vast blue horizon, except Antarctica. 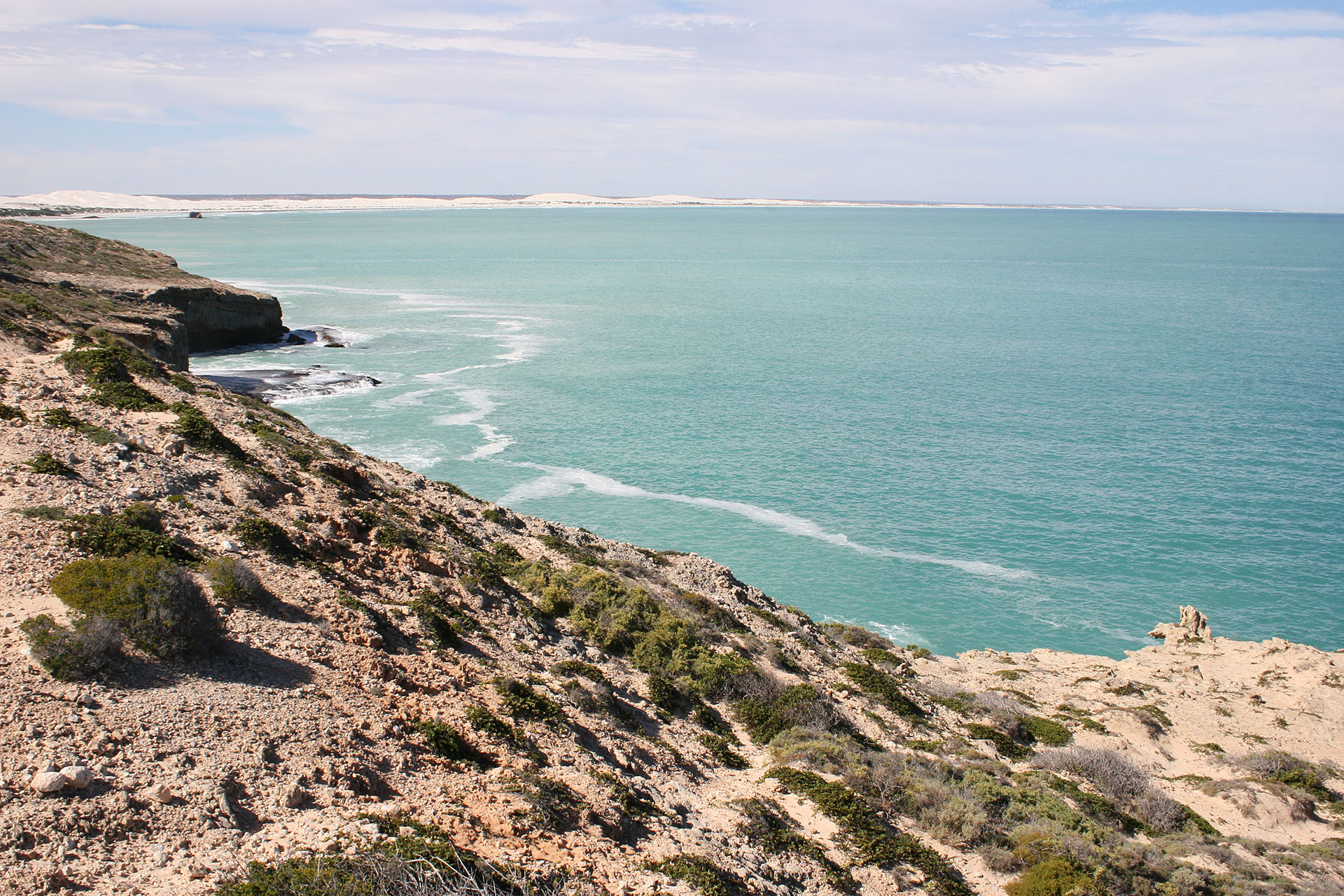 Head of Bight and the giant sand dunes.

From a nearby info stand I find out with amazement that the huge sand dunes I can see in the distance are not made by humans, but by Mother Nature. Dozens of metres above the sea level, they've been there for hundreds and even thousand years: constantly replenished by the waves of the Bight, slowly moving deeper inland with every passing year. Simply because not enough vegetation grows there to bind the treacherous sand.

On the left side the picture is entirely different: precipitous cliffs and noisy waves crashing into it endlessly. The cliffs are visibly layered, showing us how the Nullarbor Plain looks underground. The info stands around offer in-depth explanation on how old each layer is. 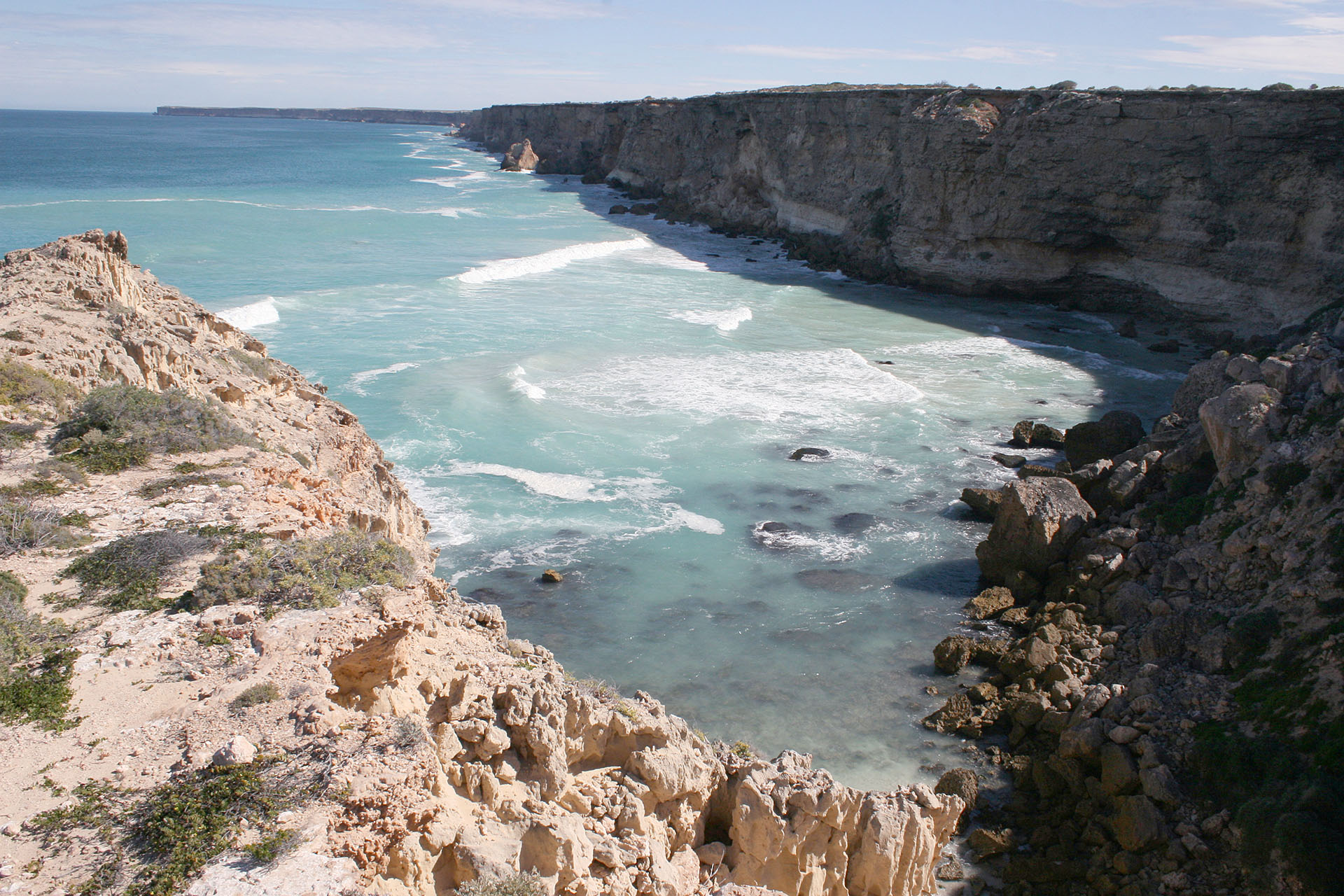 Later in the day, I'll have a chance to look at these picturesque cliffs even closer.

As I mentioned earlier, the Bight is a popular place amongst whales who breed there; this, in turn, attracts numerous whale-watchers, who apparently are enthusiastic enough to travel such long distances. It is said that during the peak season (June to October) one can see up to seventy giant mammals frolicking around in the bay. Unfortunately, it's a bit too long to wait until the peak season, so I leave the hospitable coast and attend the local toilet, where the sea breeze gently caresses my bare bottom: the whole thing is placed on stilts just above the sand dunes.

I drive on. The scenery remains the same: vast plain, covered in saltbush from horizon to horizon. As day grows late, I decide to stop and camp on the coast of the Bight. I turn left, on one of the bumpy dirt tracks that veer left of the highway; The Bight is quite close here, a 200 metres or so. On the precipitous coast there is nothing but sand, saltbush, and wind. No people at all. I get out of the car and walk around, enjoying the views and also picking a camping spot for tonight. 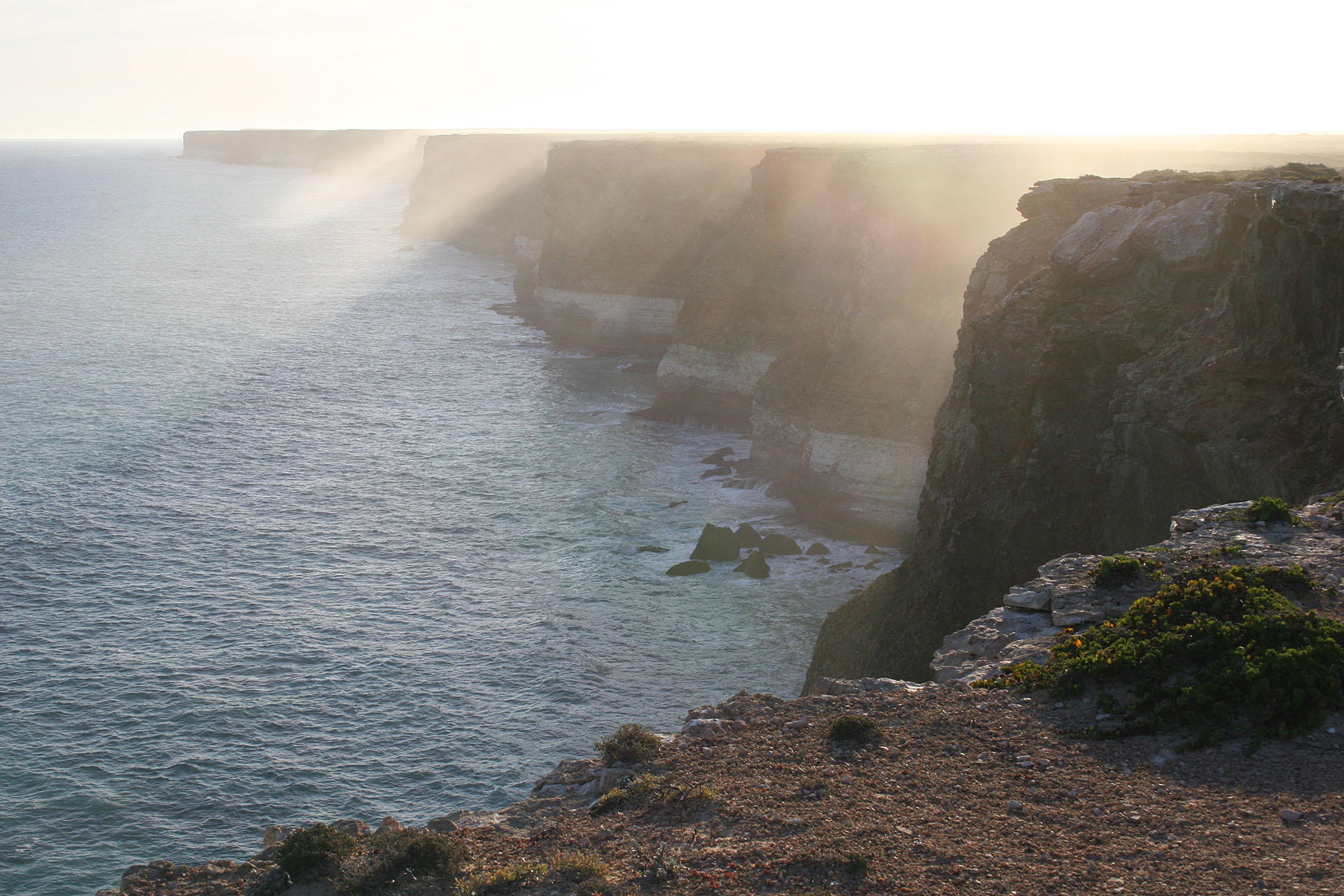 All this gorgeous vista is entirely free of charge.

Plenty of spots available. The surface is rough: sand, littered with pebbles, surrounded by dunes. I'm too cautious to step on the brink of a cliff, though: it's too easy for the weathered limestone to crumble down and take me along with it. The views are quite spectacular, nonetheless. 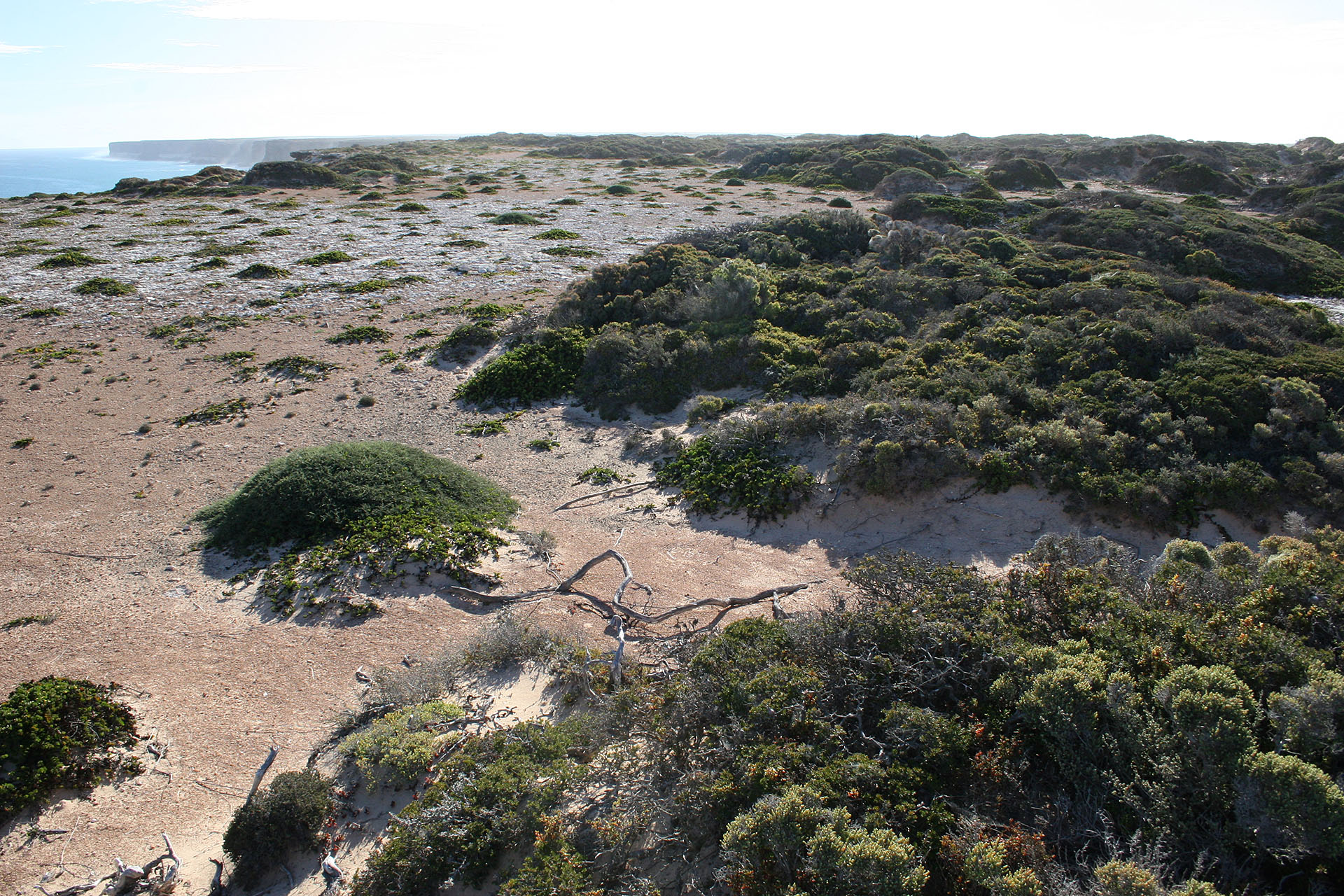 The coastline of the Bight.

While I stroll around and make pictures, I suddenly see another traveller nearby, dressed like a motorcyclist. We make a quick acquaintance. The guy's name is Nicolas, he lives in Australia temporarily and works for Switzerland remotely, even though he's French himself: a man of many countries. He travels in the same direction as myself, following almost the same route. We have a brief chat and wish each other good luck before parting our ways (for now). Gotta make a camp for the night. 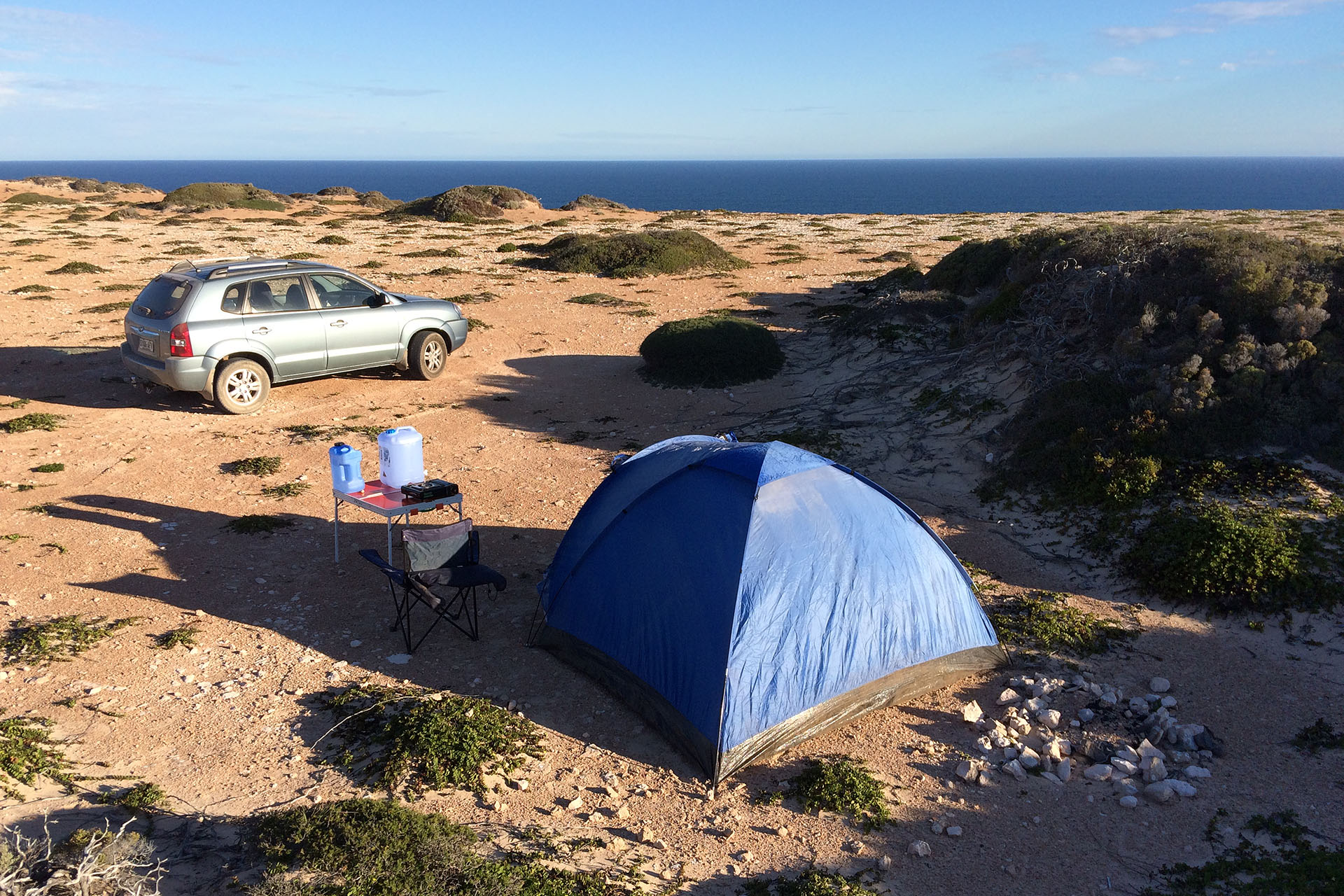 As the sun sets down and the dusk thickens, I run out of things to do, and yesterday's nervousness creeps over me again. It's very unsettling to know that there are no people around at all. Trying not to think about this, I briefly outline the day's journey in my notepad and jump into my sleeping bag. 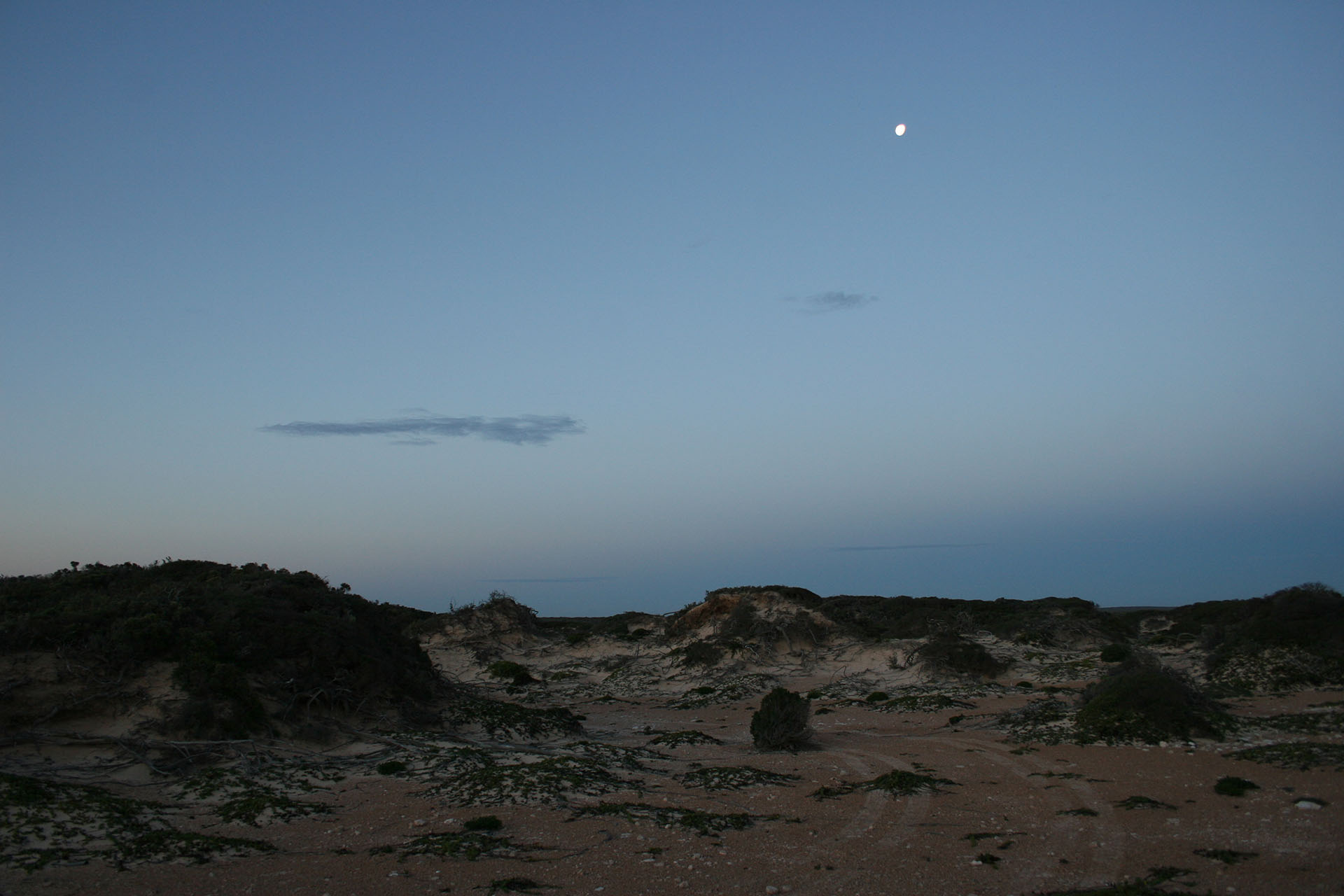