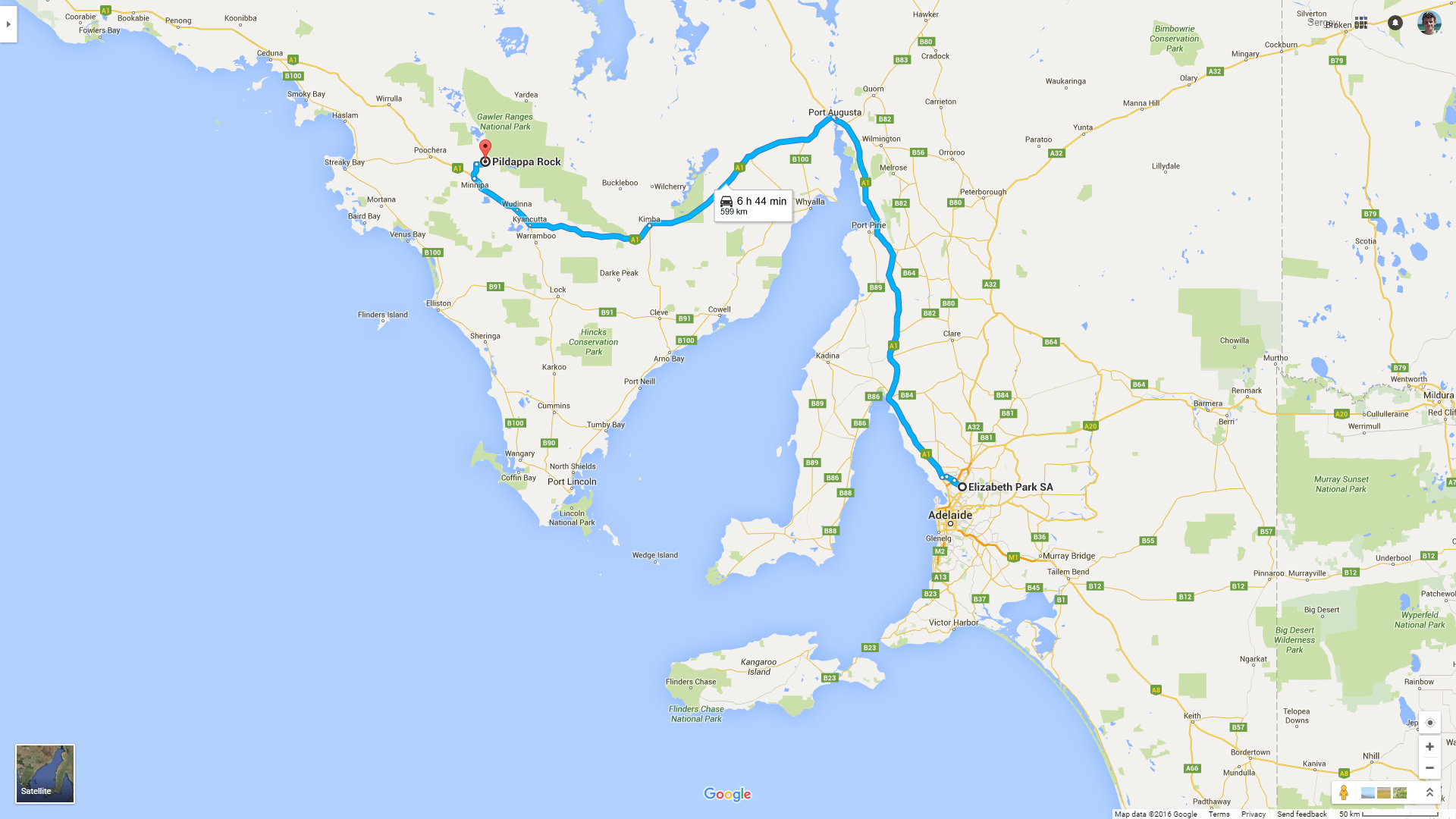 At 6:20 am I drive out of my garage in Elizabeth Park. The sun is not fully up yet, but I'm not sleepy at all. Finally! My journey is happening at last! The familiar suburbs roll past my window, changed by the suburbs not too familiar; then it's only farms and greenhouses; and then it's finally Port Wakefield Road, the first country road of my journey. Port Wakefield, a small coastal town, is soon left behind as well, and now I'm on Stuart Highway. This highway stretches all the way from Adelaide to Darwin, but Darwin is the place that I'm aiming for just yet.

The nature on both sides of the road begins to awaken, warmed by the quickly rising sun. On the right Mount Lofty Ranges are seen, changing gradually into the southern Flinders Ranges. After a while all these ranges shift to the left, and I make my first pic-stop outside of Lochiel, SA. There are very picturesque wind farms on the hills, and also a board with a black-and-white, but cheerful plesiosaurus who welcomes all visitors: a local breed of Nessie, apparently. 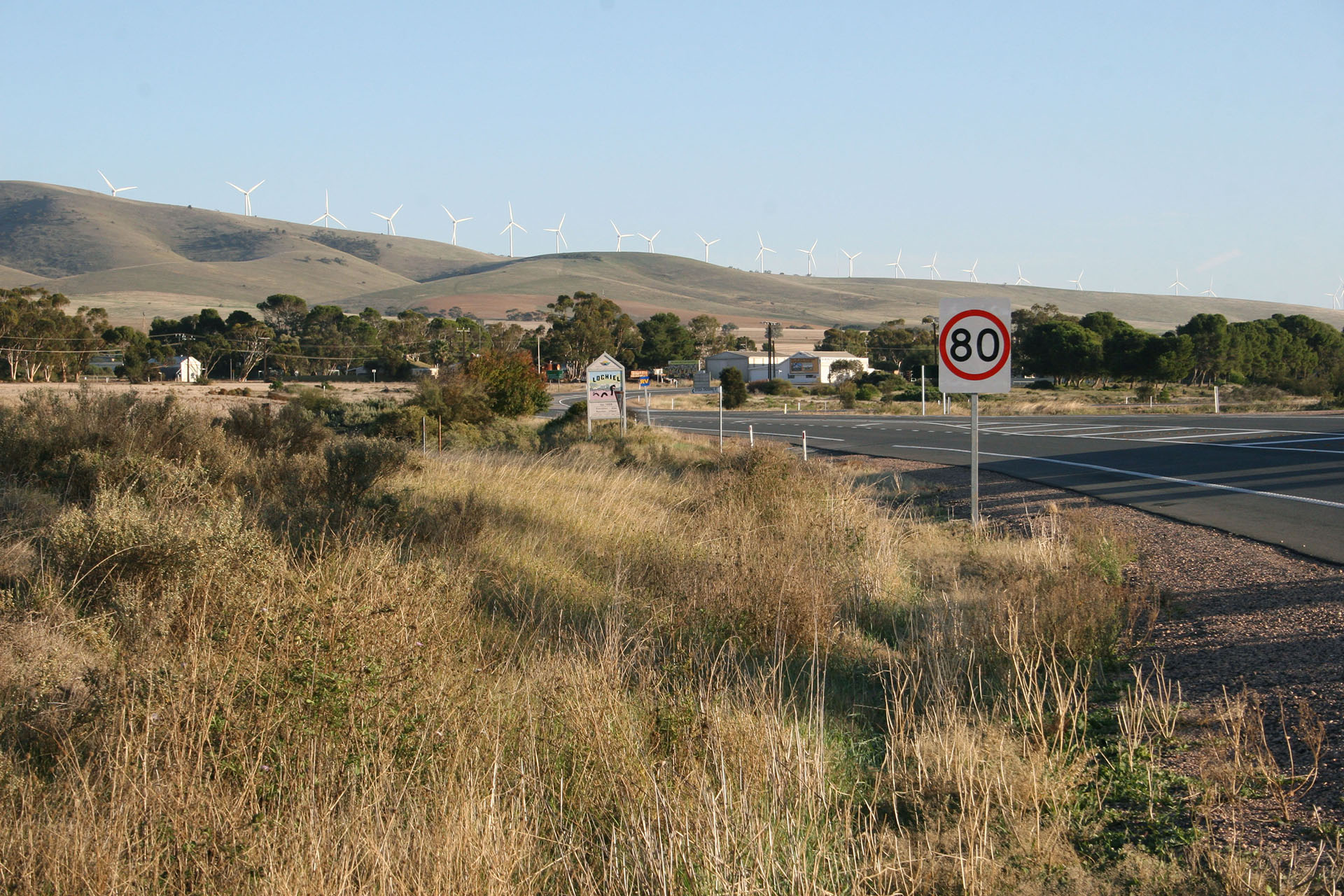 Next stop: Mount Remarkable National Park. A good sealed road leads me there, towards the gate where I'm supposed to pay $10 to enter. The only way I can do so is online, and luckily the only bar or reception that I have here on my phone is enough for that. I start preparing my backpack and then I see a specimen of local fauna about 10 steps away from me. 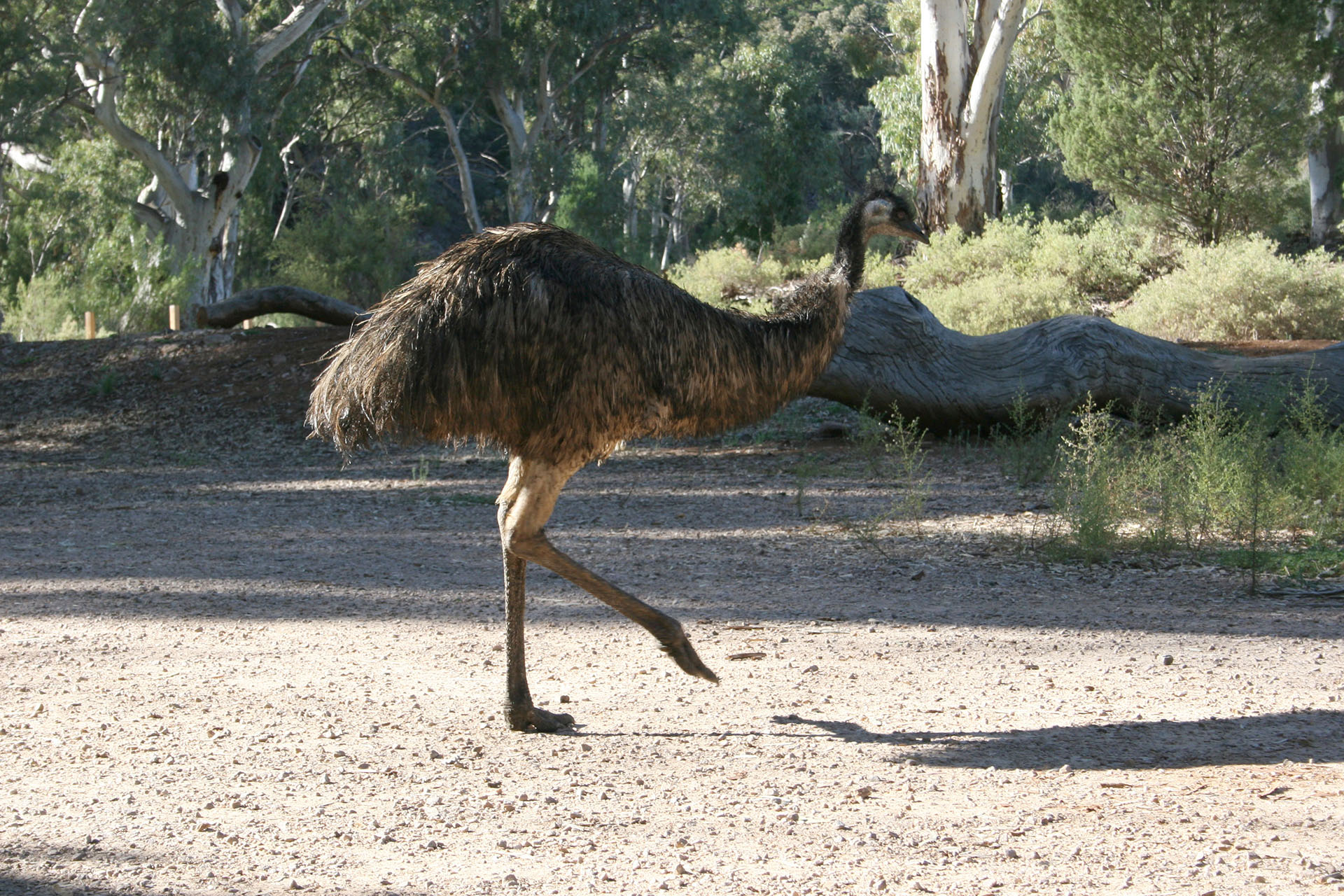 The bird amuses me and makes me slightly nervous at the same time; it's just a stupid bird, of course, but it's a big stupid bird. However, when it sees that I've already packed my sandwiches and quickly walk towards the walking trail, emu loses all interest in me and struts away indifferently.

The park is quiet and tranquil. The morning sun shines peacefully above the trees (conifers, for the most part), dry grass, scattered rocks (a lot of those), and kangaroo droppings (even more of those than rocks). Or maybe it's wallaby's, not kangaroo's, but my knowledge about marsupials is not enough to be 100% certain. 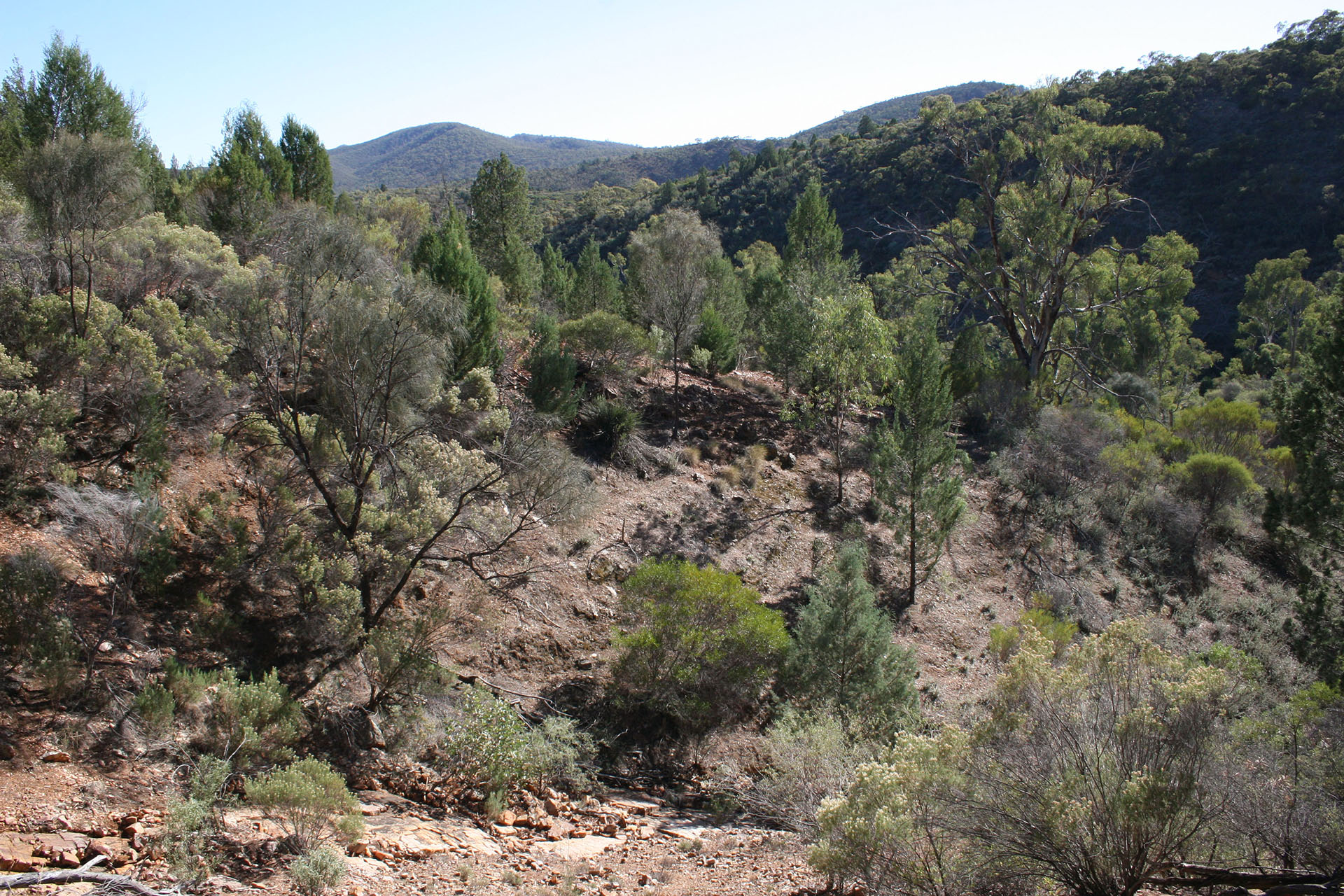 Slowly I make my way uphill, happy that it's still morning and not too hot yet. Half an hour later, I see vast fields stretching afar, and a bright-blue strip of the gulf. Behind this gulf lies the Eyre Peninsula, where I've never been before and where I will be just an hour or two later. 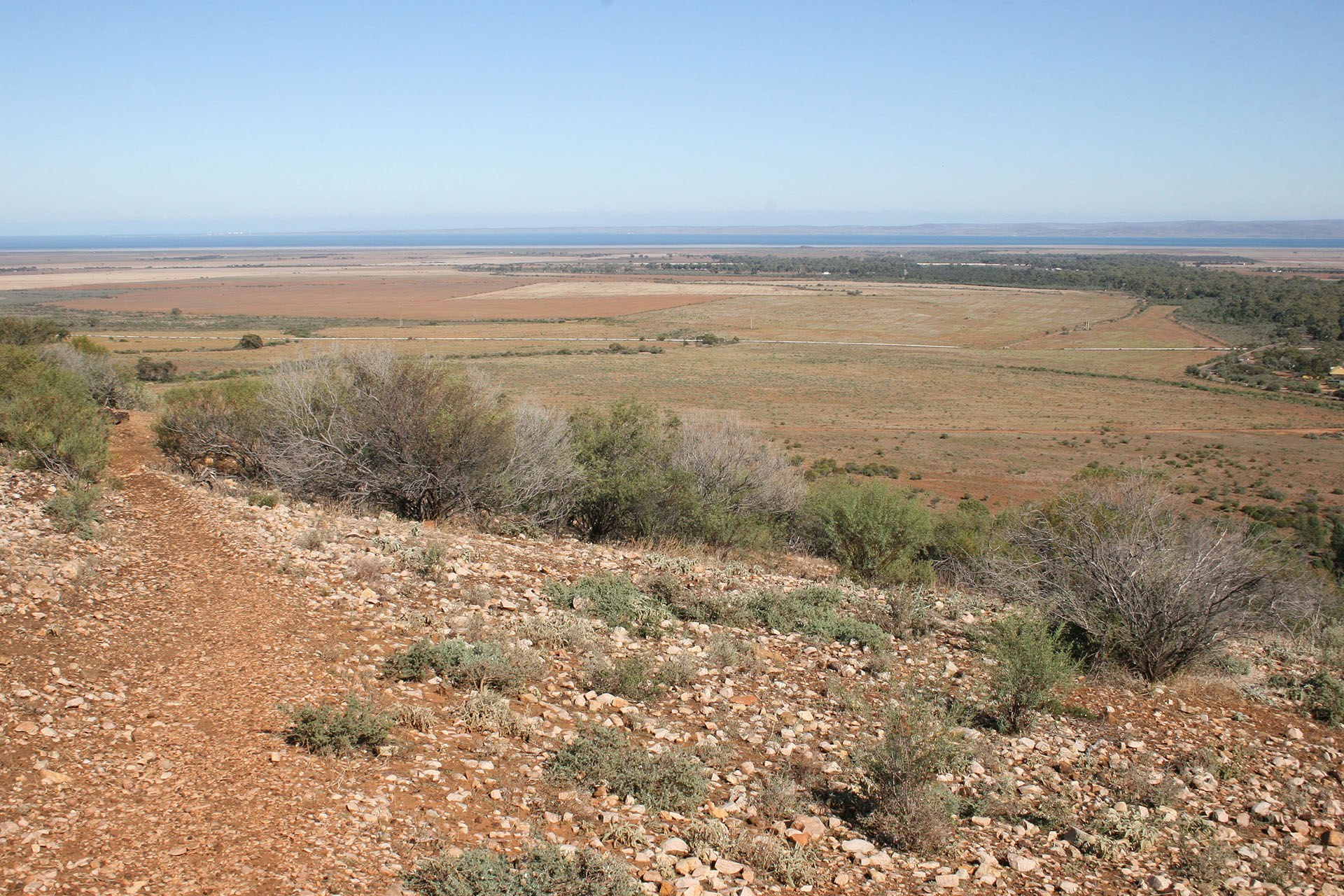 Spencer Gulf is right over there, and so is the Eyre Peninsula.

I sit on the bench to enjoy my sandwiches. Then I decide to leave the path and climb up the top of the hill – just to check if the view is even more picturesque up there. When I finish my brief ascent, I realize that the view is practially the same, and that the most of it is hidden by the surrounding hills which I couldn't have seen from the path. Disappointed, I climb down… and realize a few minutes later that I can't find the path now. The first adventure on the road! Luckily, the terrain is perfectly visible throughout, and as soon as I see the parking lot with my Tucson I head straight towards it, through the tangled dry grass and low bushes. I even manage to scare a few kangaroos along the way. 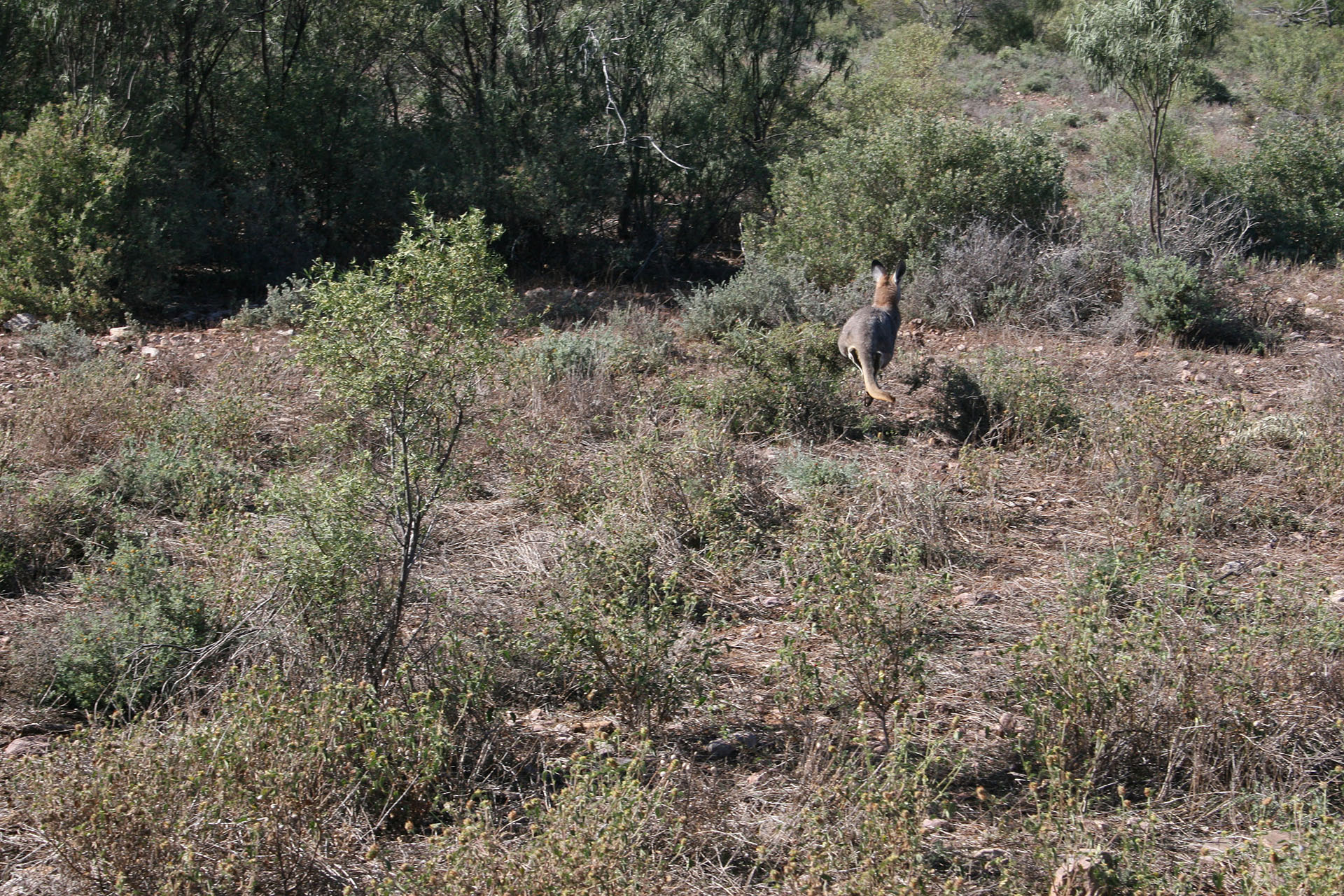 The animal is very quick to leave; clearly, it knows humans very well.

It all takes only an hour instead of the two I had planned to spend in the park. Apparently, there's not much else to see here anyway, so I take off and half an hour later enter Port Augusta. I'm still good on fuel, but I visit the service station just in case: the first refuel on my long trip. 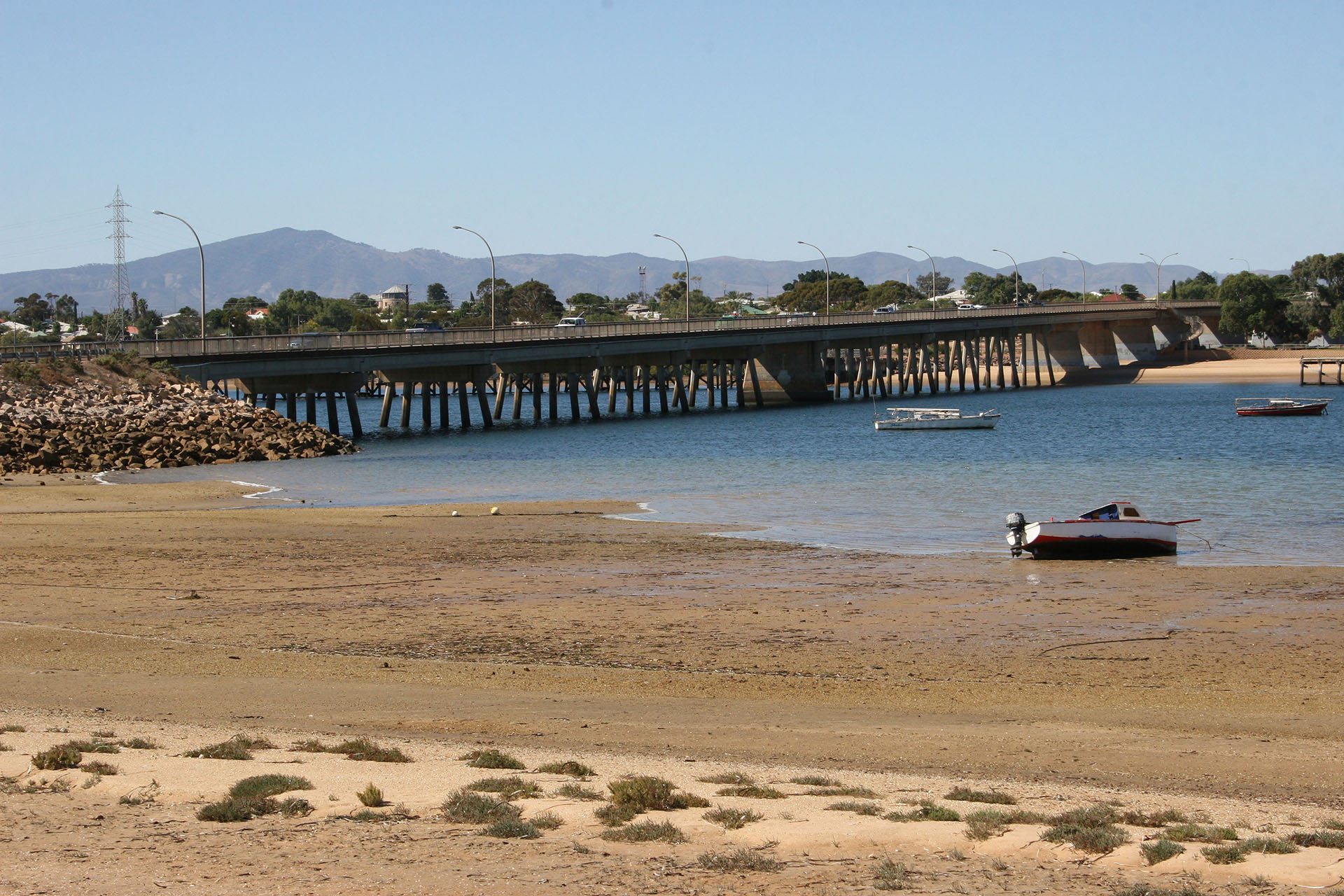 A bridge across the Spencer Gulf in Port Augusta. Adelaide is on the other side now.

Also, I have my first lunch on the road: in Barnacle Bill, fish and chips for $18.90 (which is quite good). There are two major roads leading out of the town: Stuart Highway, which goes north towards Darwin, and Eyre Highway, which goes to the west. I'm taking the latter. 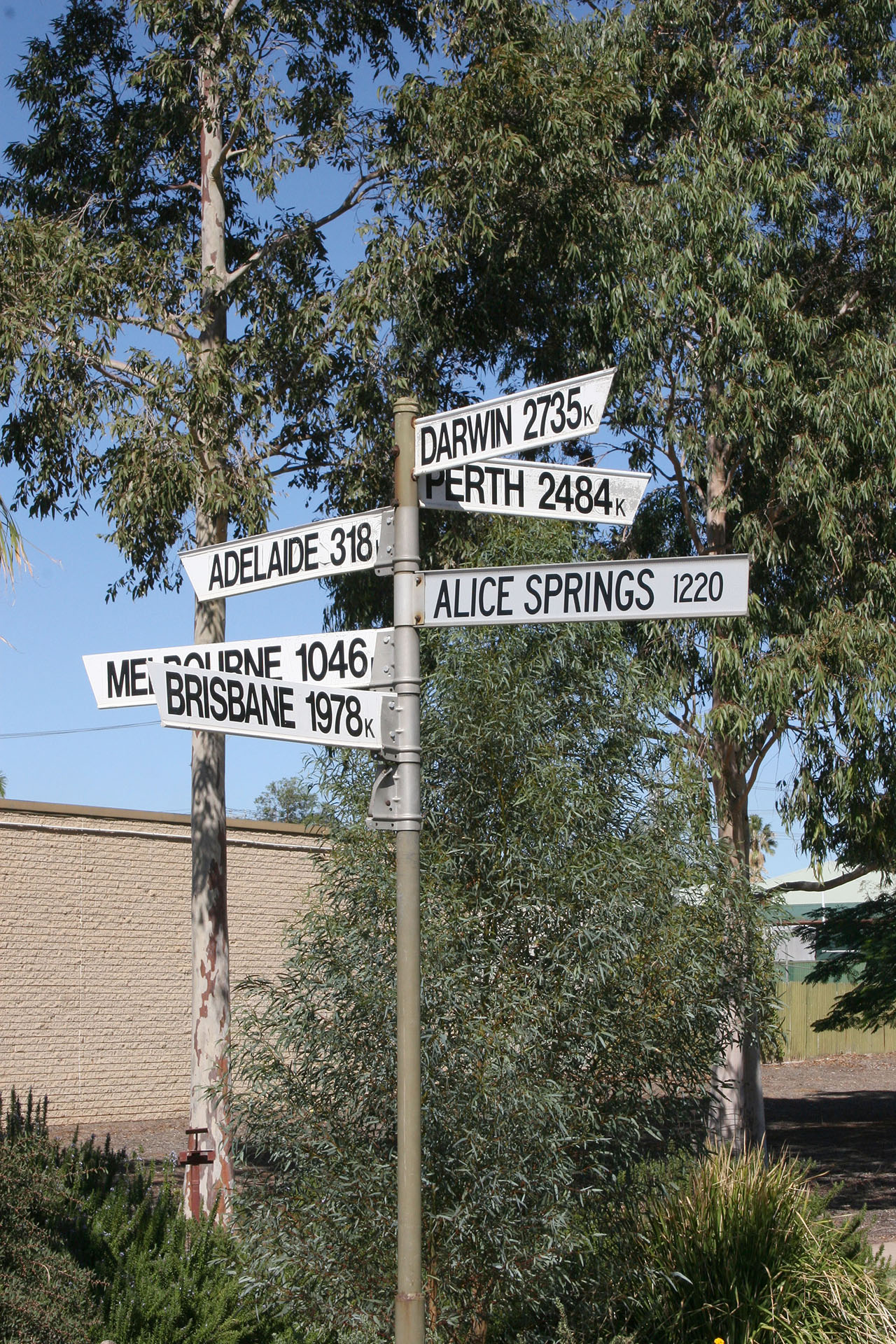 Just in case someone's forgotten where everything is.

And now I'm on the Eyre Peninsula. One more step, as Samwise Gamgee once said, and I'll be the farthest away from home I've ever been. The road traffic is almost non-existent. A thick water pipe runs along the highway; there is no drinking water on the peninsula, and the pipe takes care of it. The landscape looks quite arid, indeed. 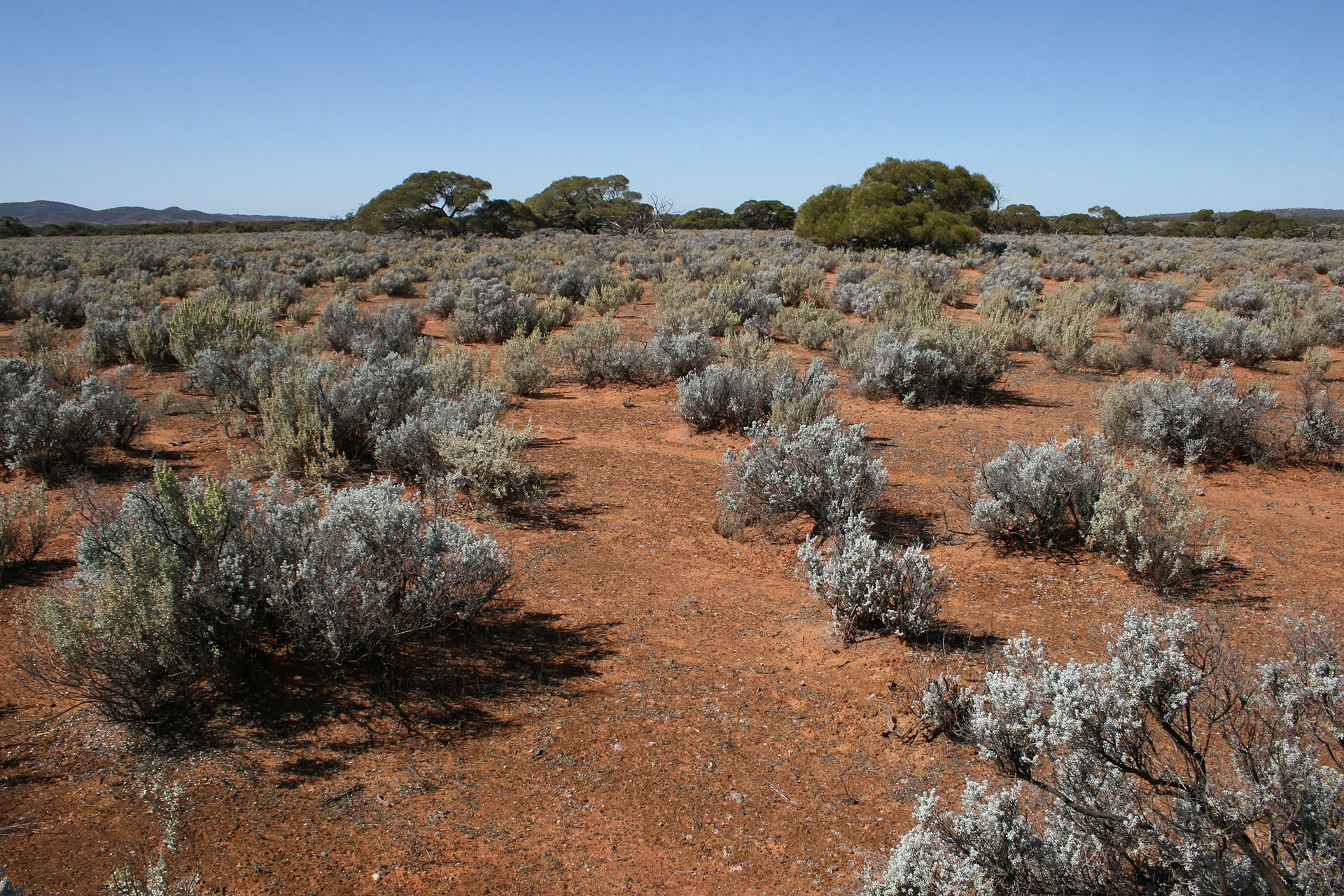 So far the Eyre Peninsula doesn't look too hospitable.

This look, however, is deceiving. This region is quite developed agriculturally, and they grow wheat in many places around here: every now and then I see white silos scattered amidst the plains. (I'll show you one of them a bit later.) Wherever there isn't grain, there's cattle, or a place to mine something out of the earth: mostly iron, in case of Eyre Peninsula. One of the towns here is called quite tellingly: Iron Knob. Other than that, it's just dusty outback on both sides of the highway. 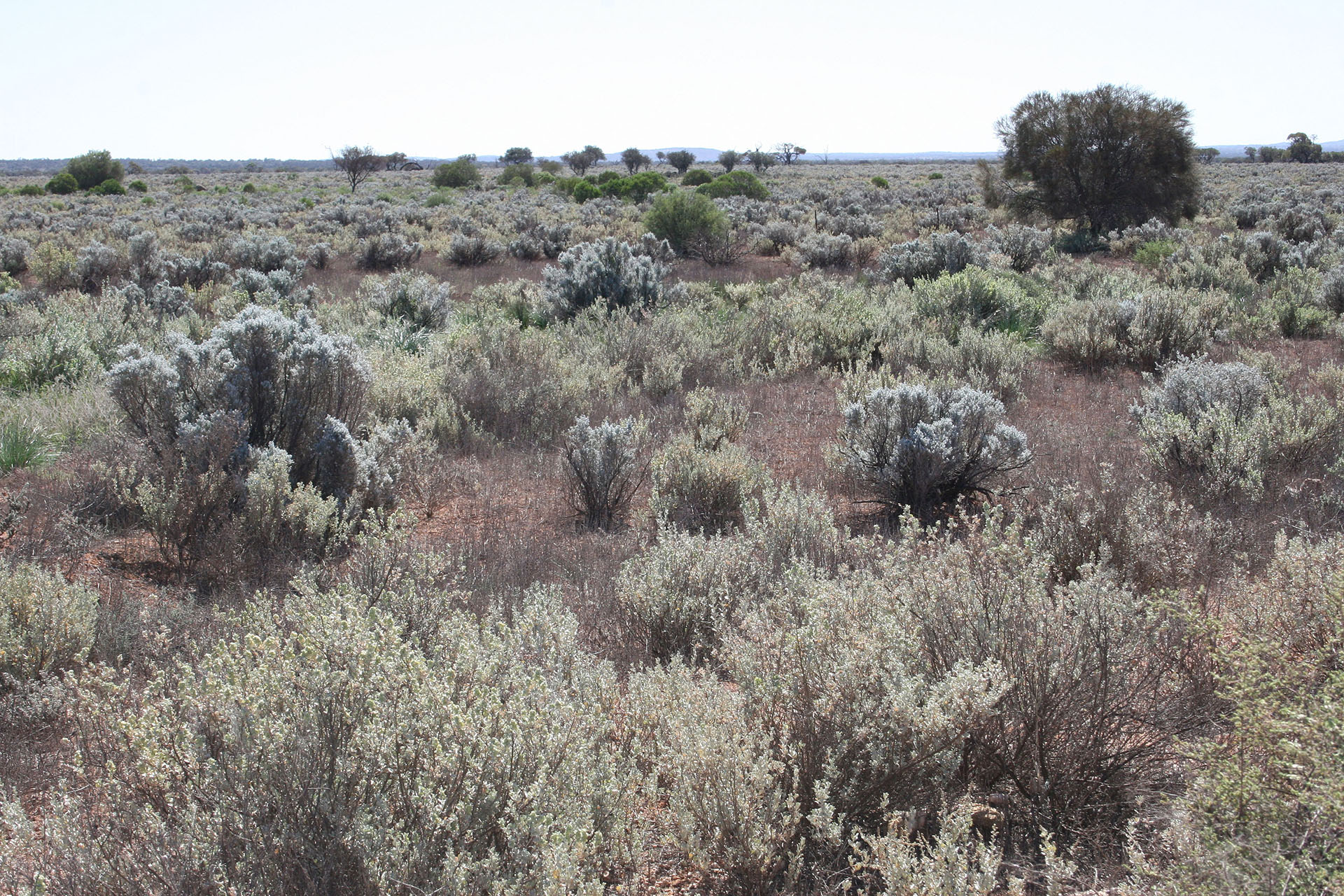 Grass and small trees all the way to the horizon. Behind the horizon it's exactly the same.

Nothing much happens for the rest of the day. The road flows smooth across the dry plains, with only a small town or a silo in between. Late in the afternoon I reach Minnipa, where I take a turn right and travel along a dusty (but very good) dirt track, which takes me to my destination: Pildappa Rock. I can't help but take a quick picture of Tucson next to the iconic kangaroo road sign. 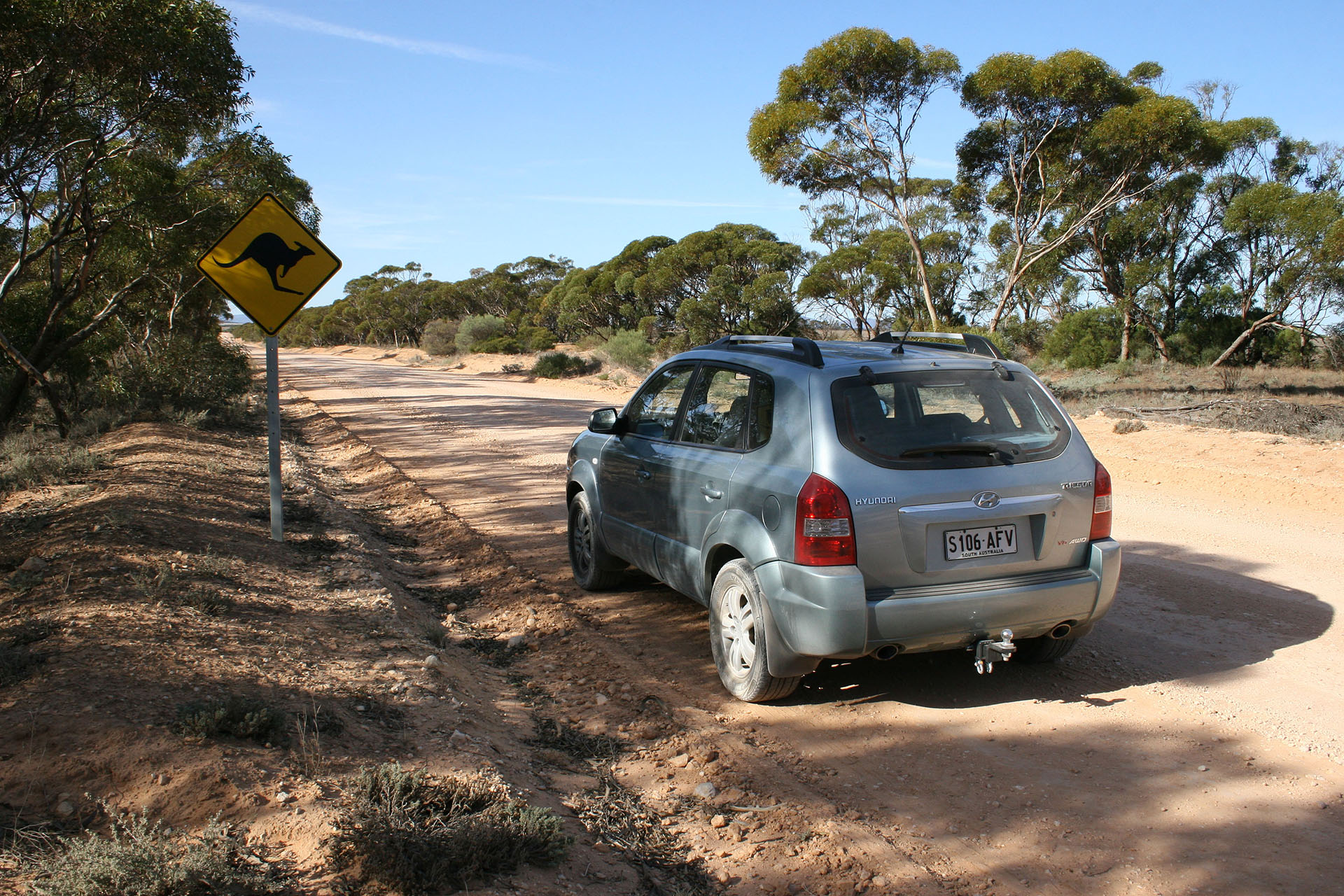 It's almost 4 pm when I finally arrive. No sounds and barely any people: clearly, this place is not a popular tourist spot, even though the eponymous rock is quite a sight to behold. It is surrounded by the same dry plains… with some wild watermelons hiding on the ground. 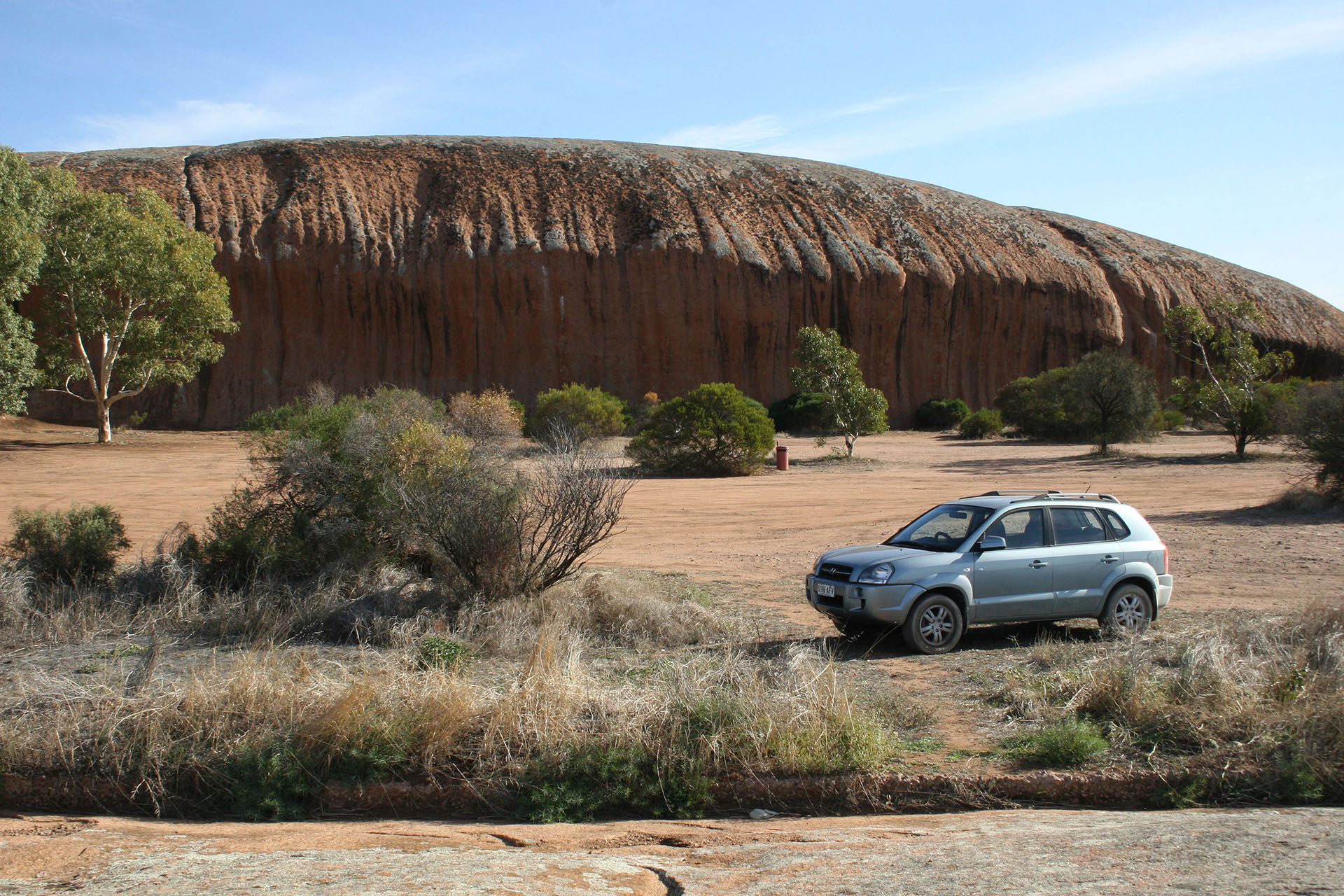 Pildappa Rock and my Tucson (just to scale). 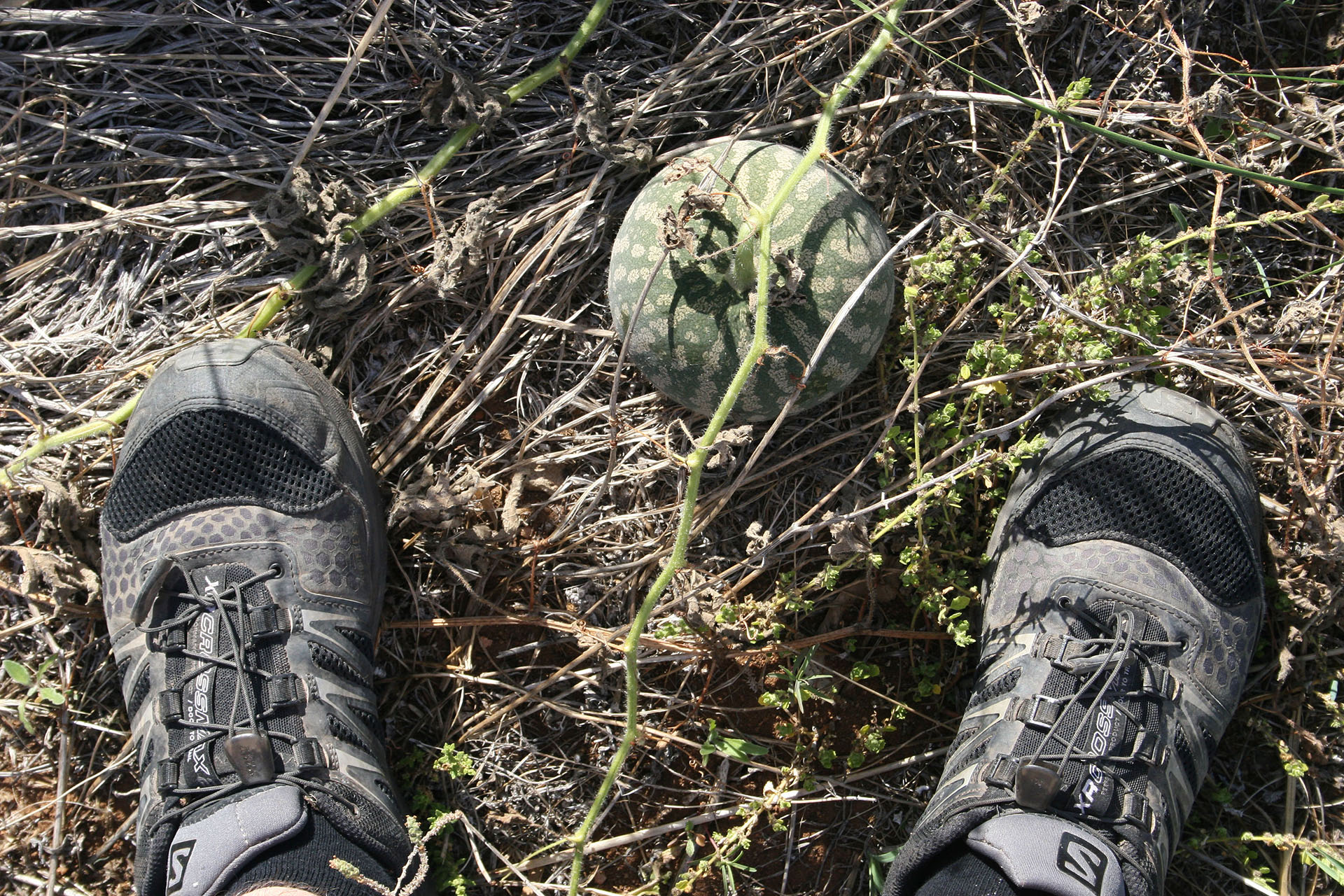 I decide to take a walk around and make a few pictures. The rock is enormous, the size of a small stadium. Its weathered, rough surface is covered by lichens and small dips: no water in any of those at this time of year. 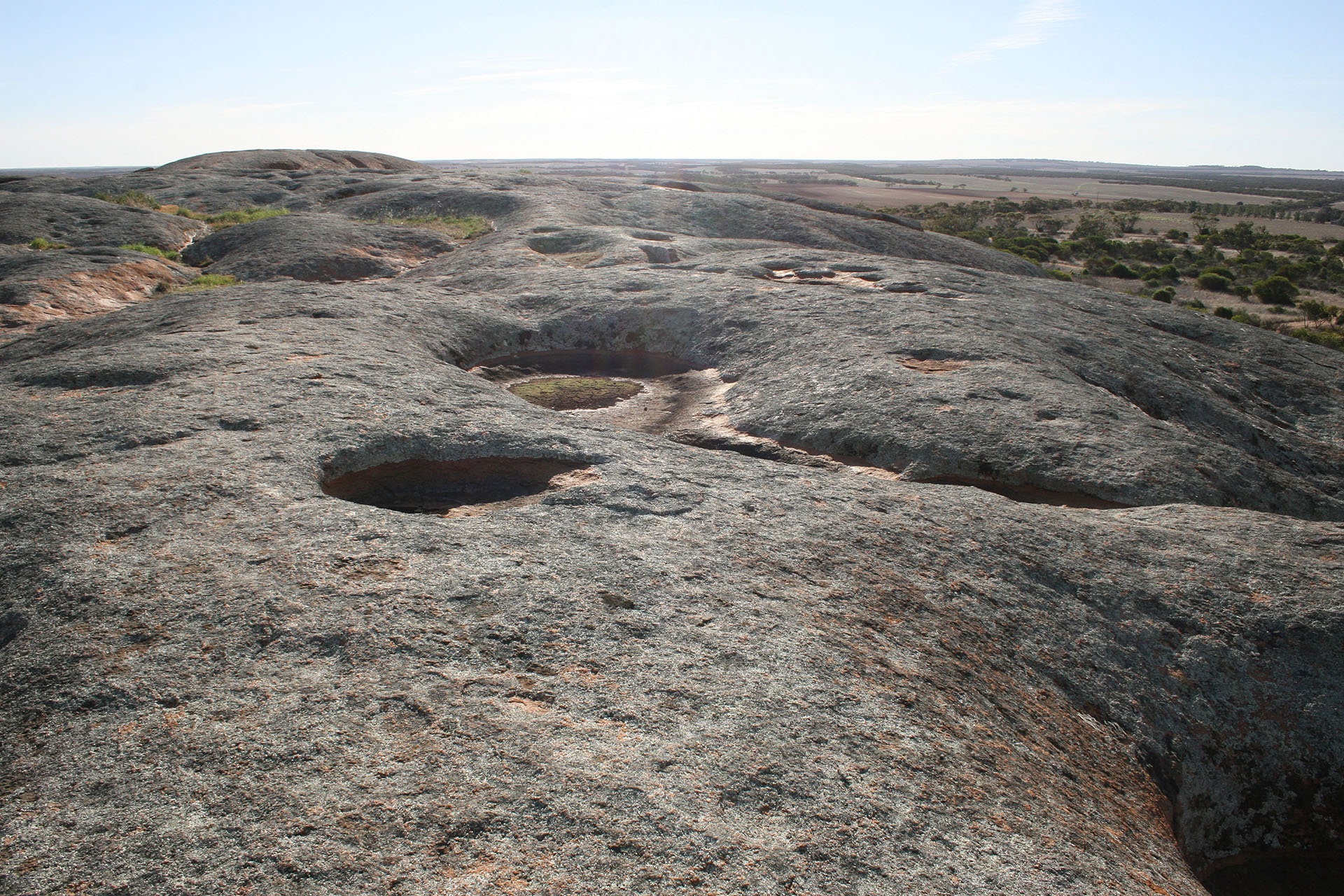 Gawler Ranges National Park can be seen on the horizon.

The sun, however, is lowering quickly, and it's time to set up my camp. While doing this, I suddenly feel some sort of a panic attack, for no apparent reason. Why am I doing this? Where the hell am I going? Four more weeks of this?? The feeling is extremely unsettling, and to get rid of it I decide to walk around a little more and make a phone call to Marina. The signal is quite bad, but it improves a little once you climb back up on the Rock. 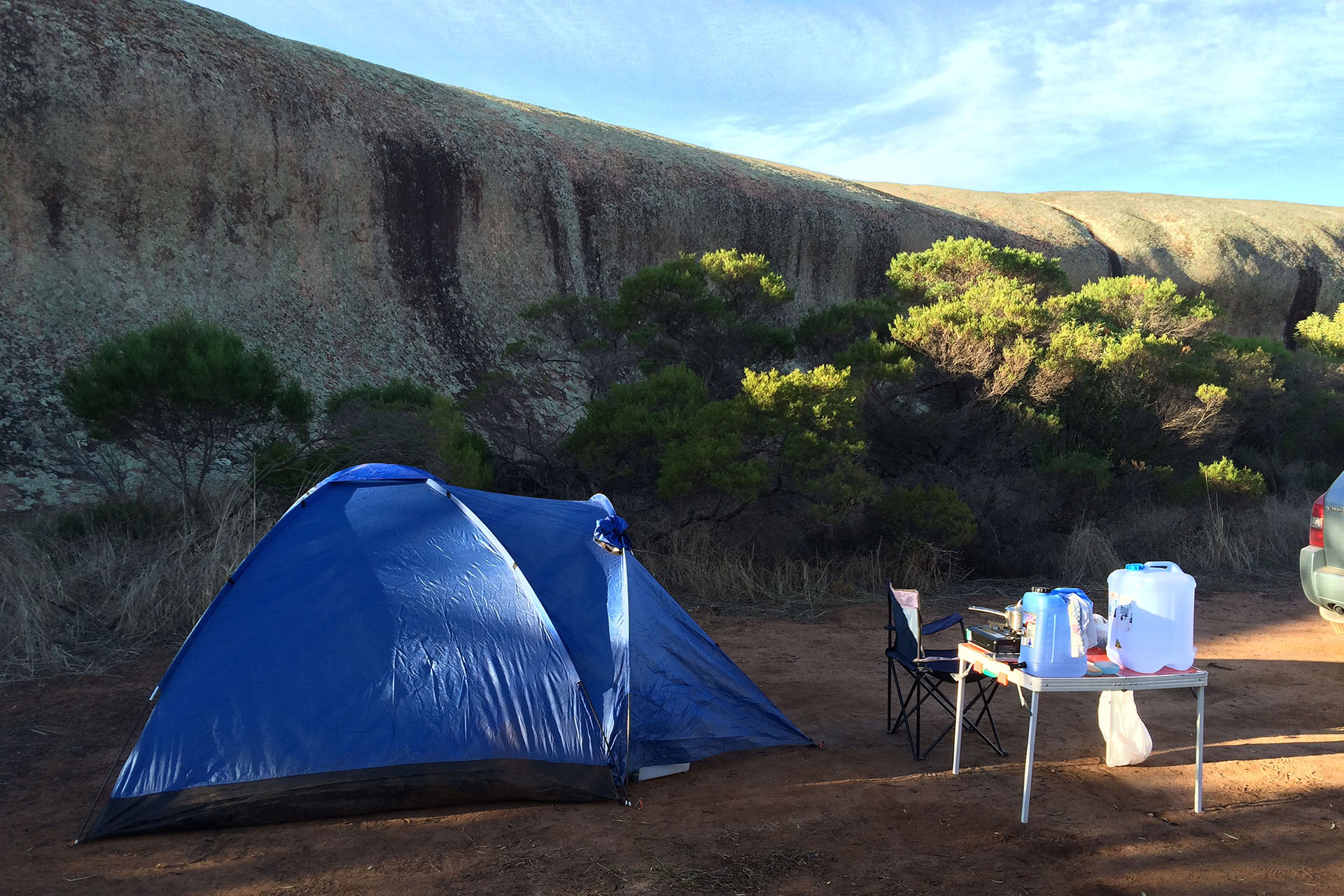 The recipe works, and I return to my camp in a perfectly good mood. It's totally quiet around; even the neighbouring campers, who suddenly arrived and settled about forty metres away, are barely heard. I fire up the cooker to warm up and eat my dinner: potato chunks with bacon, straight from the can (and quite tasty, I must say). Once the feast is over, I crawl back into the tent and begin my preparations for sleeping, also summarizing my day's trip. Which is: