Tasmania: Wrapping It Up 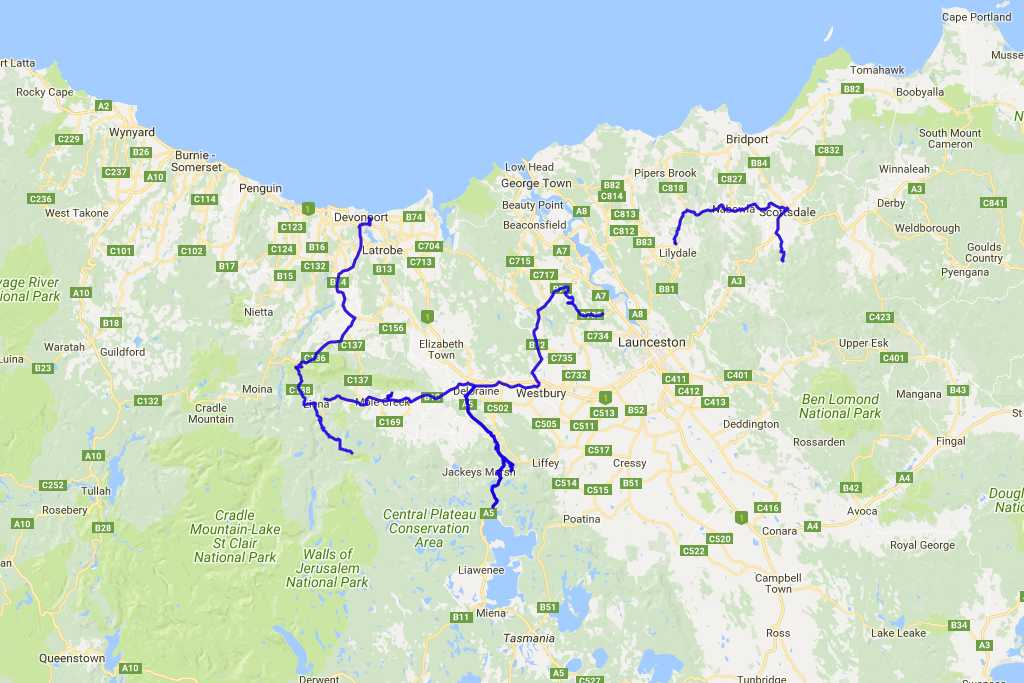 Distance covered: 381.3 km. The gaps are where I forgot to switch my GPS tracker back on in time.

Heading out of Springfield, I spot an interesting phenomenon: a sizeable fountain in the middle of the farmland, miles away from the town, with no one to see it but a few black swans. Huh? 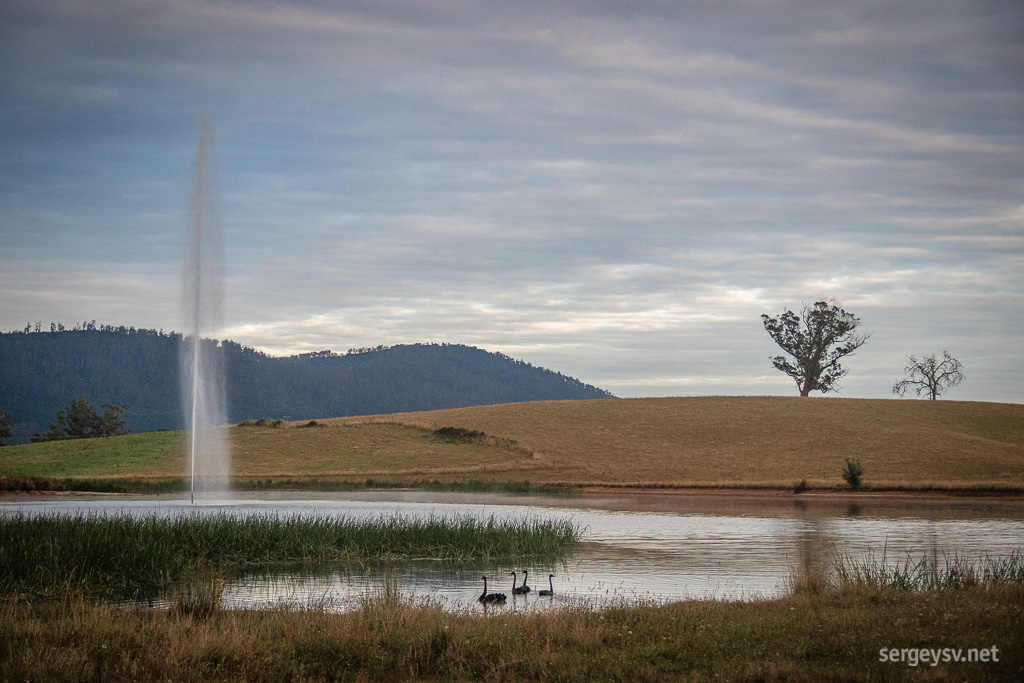 Not too far away there’s the Lilydale Falls. Gotta see as much of those falls as I can now! Good thing that I didn’t get to this place for a camp last night: it’s jam-packed with vehicles. A walk to the falls is quite nice though, and at this hour of the day (7:40 a.m.) completely empty. 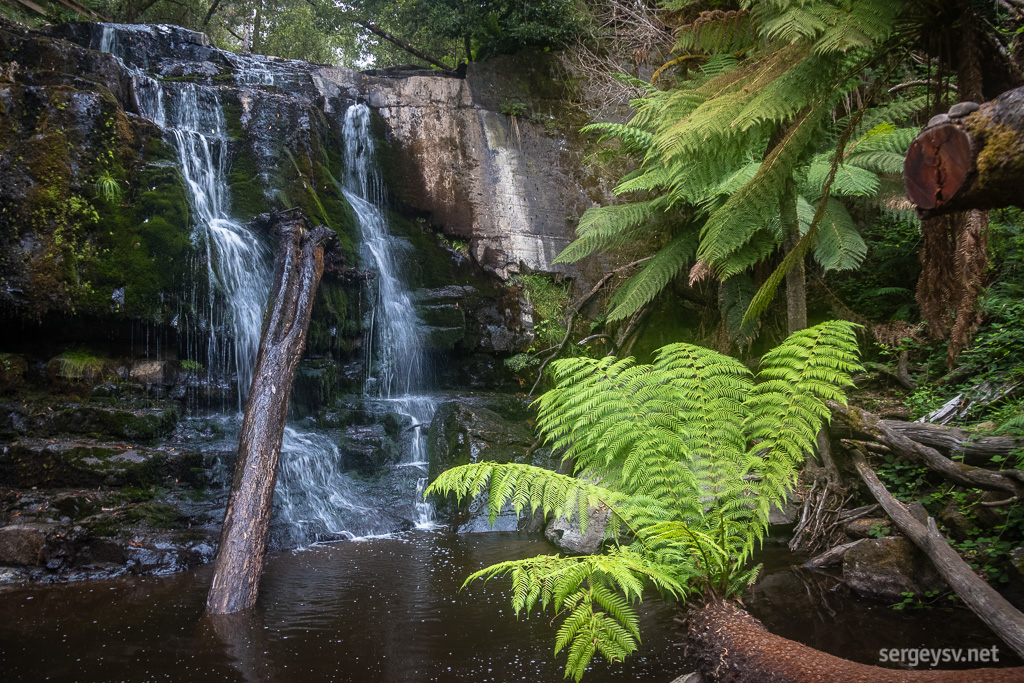 After that, it’s time to get my last fix of Tassie ferns and moss, which happens at the Notley Gorge just outside Launceston. 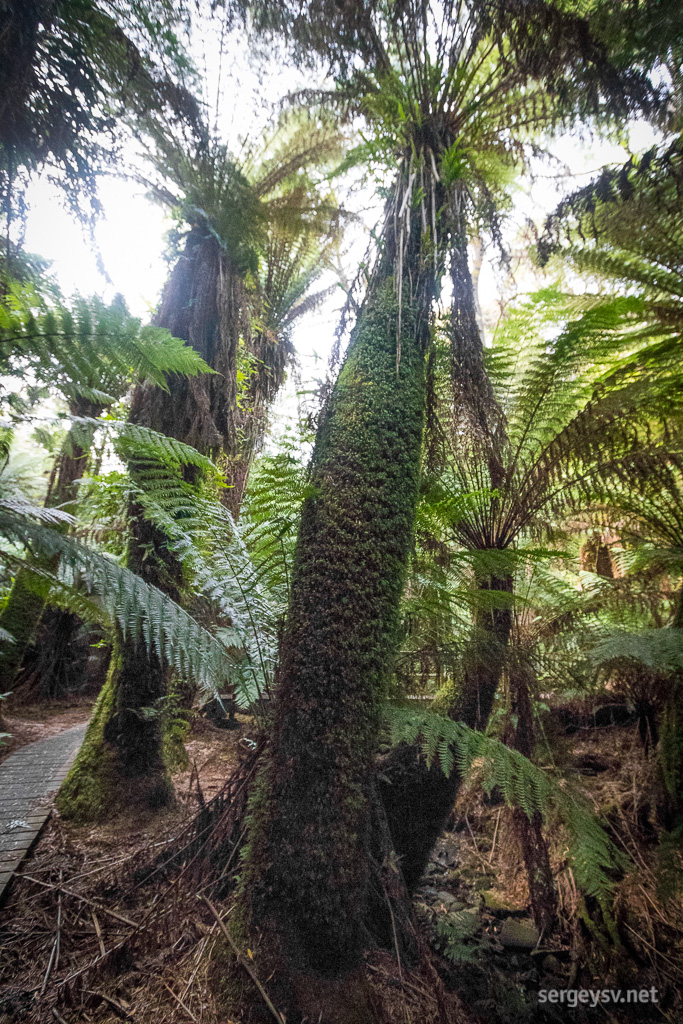 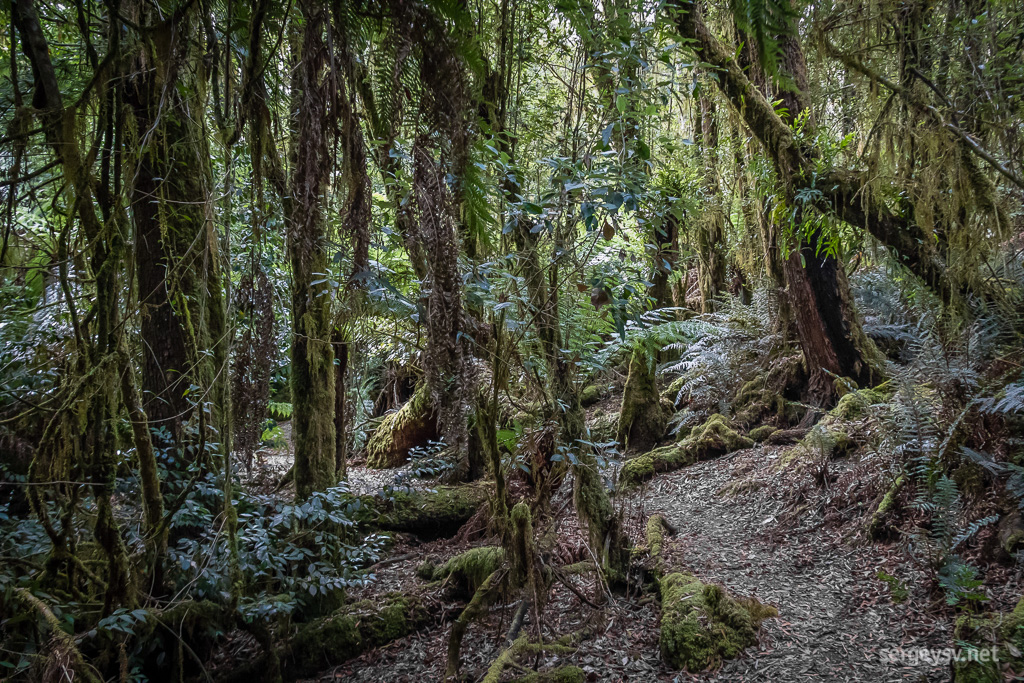 Lots of moss, all right. 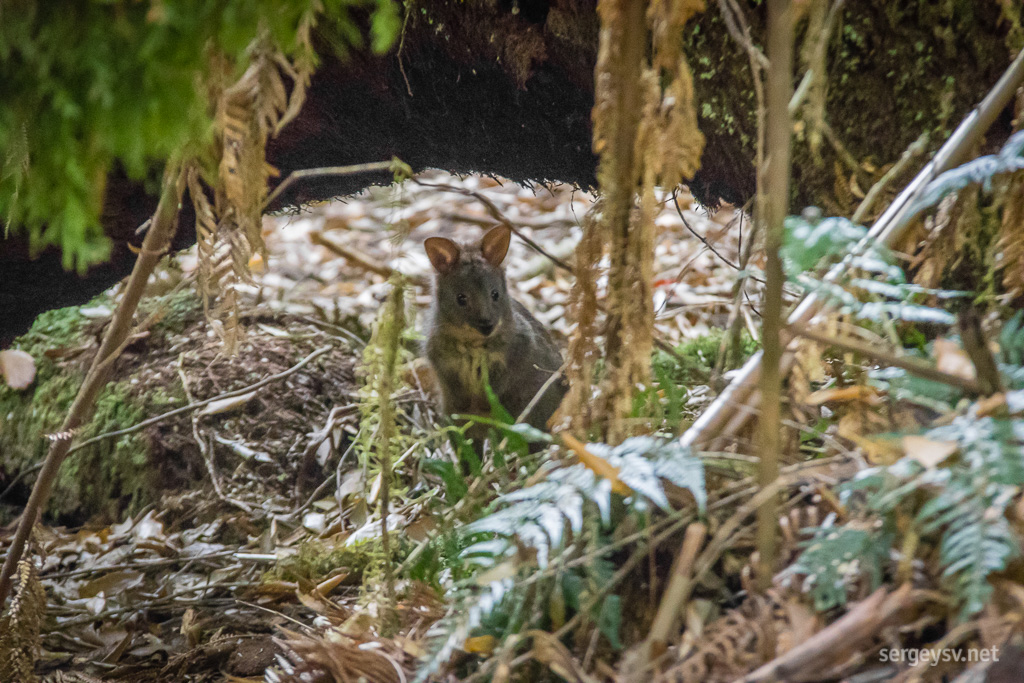 The guardian of the place.

Another quiet and even more scenic walk to a fern-covered gorge with a tiny brook streaming through mossy rocks. Pademelons and wallabies are seen and heard often, which tells me it’s not a very popular tourist spot either, although it’s barely a half-hour drive from town.

The forest in the morning. 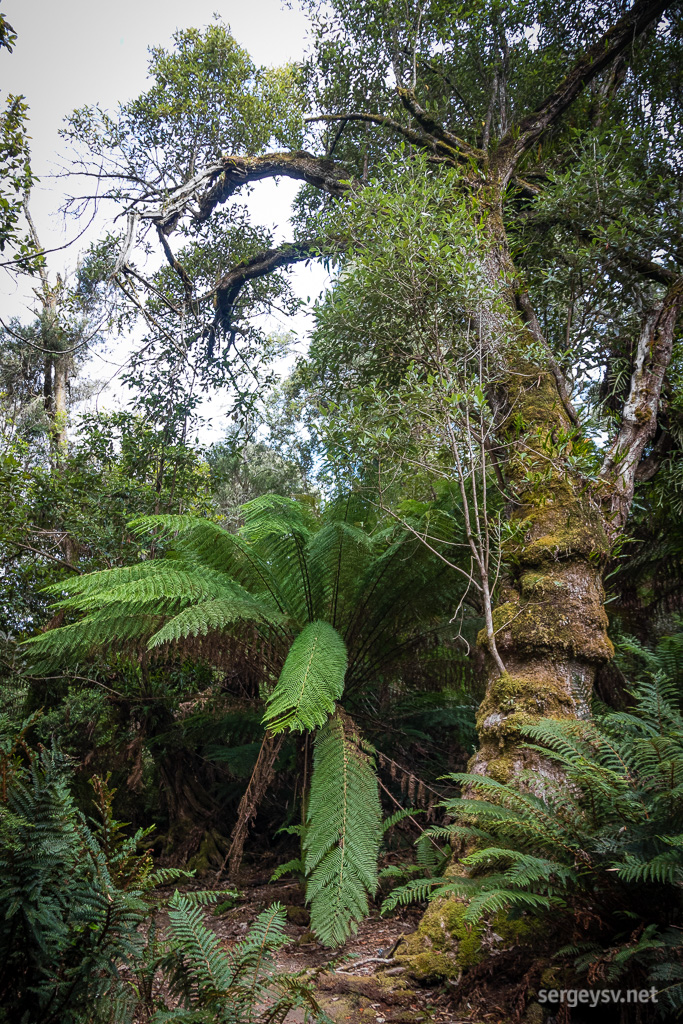 Liffey Falls is not too far away from there, but then again, nothing is too far away from each other in Tasmania. Considerably more people around. Slightly less water in the creek, on the other hand, but hey, it’s still summer. 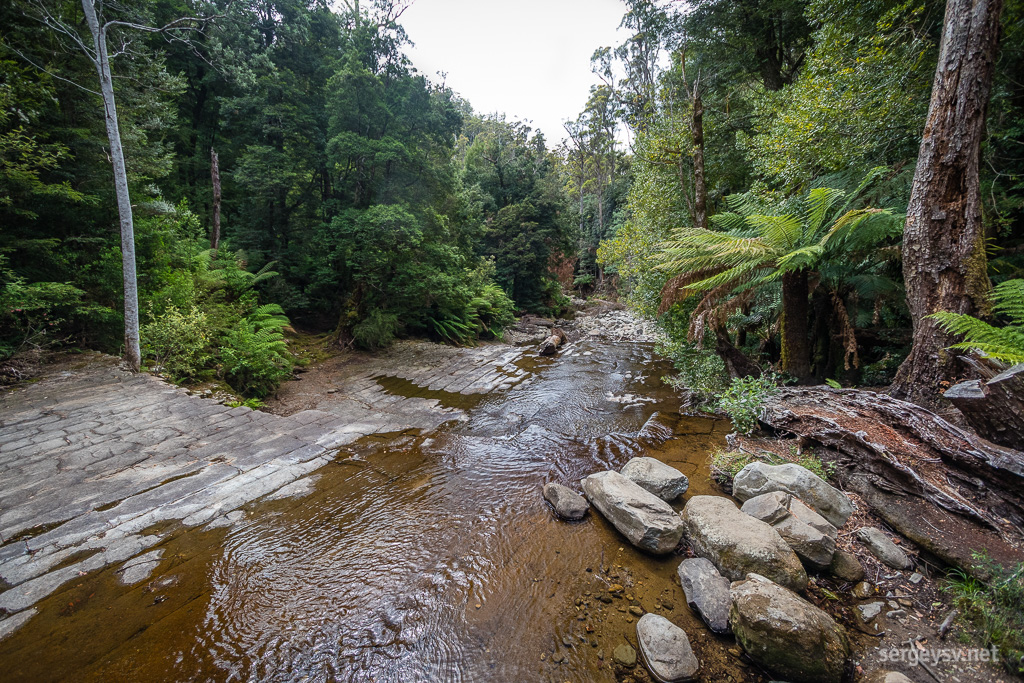 Cool layered rocks at the bed of the creek. 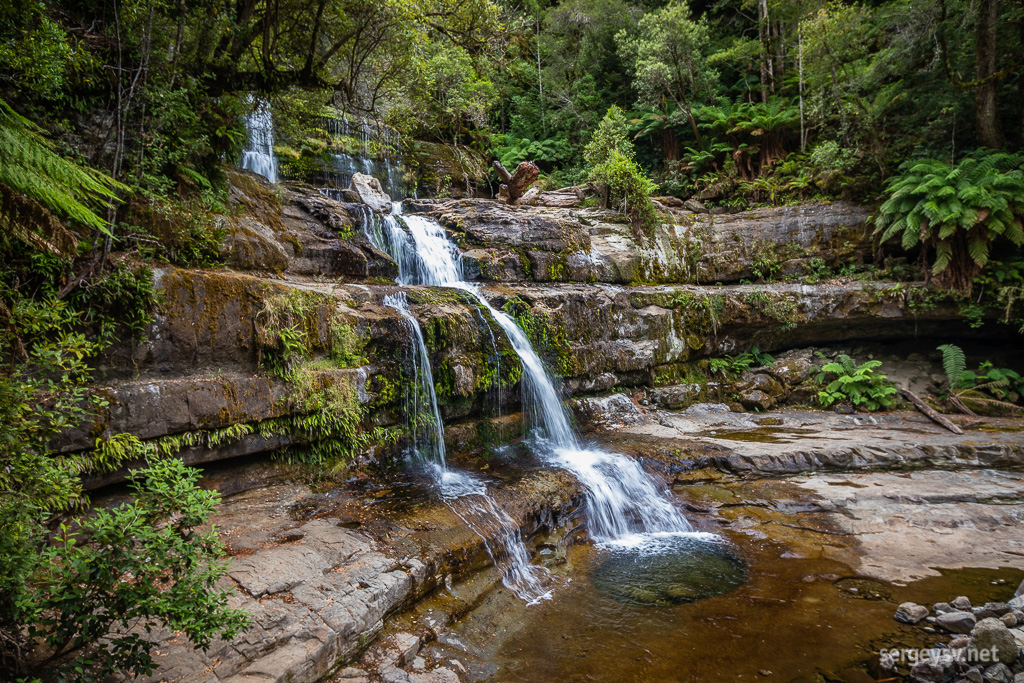 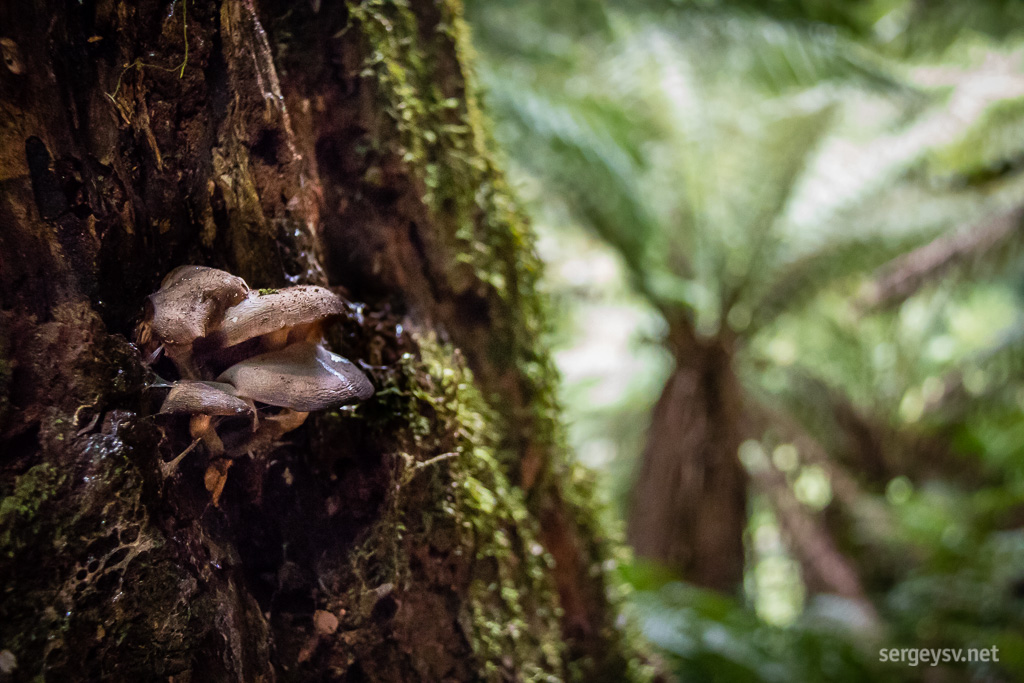 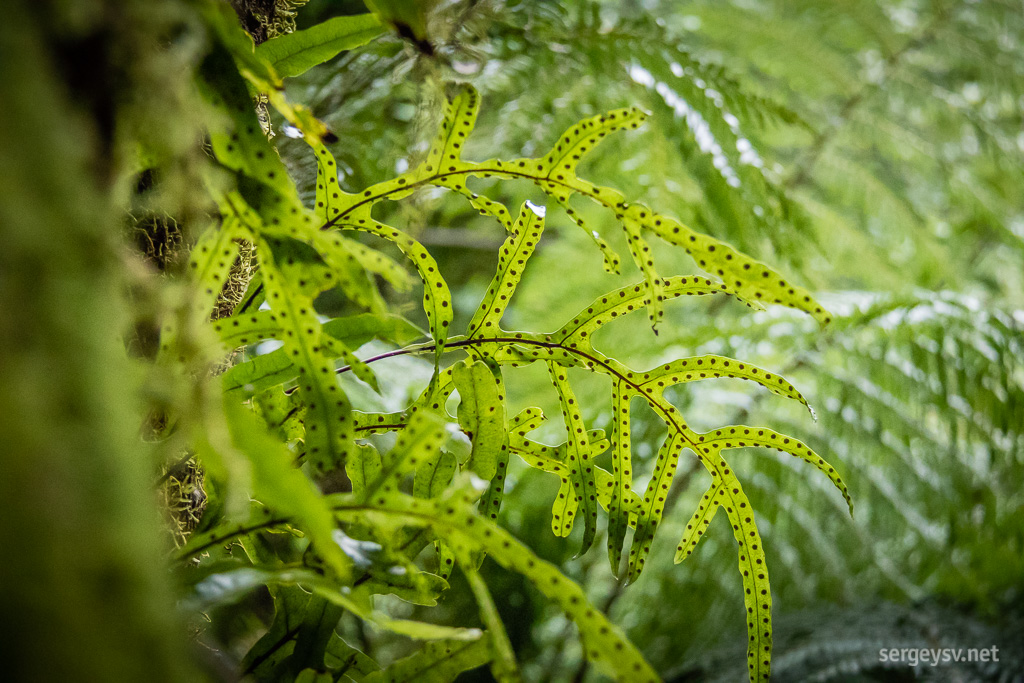 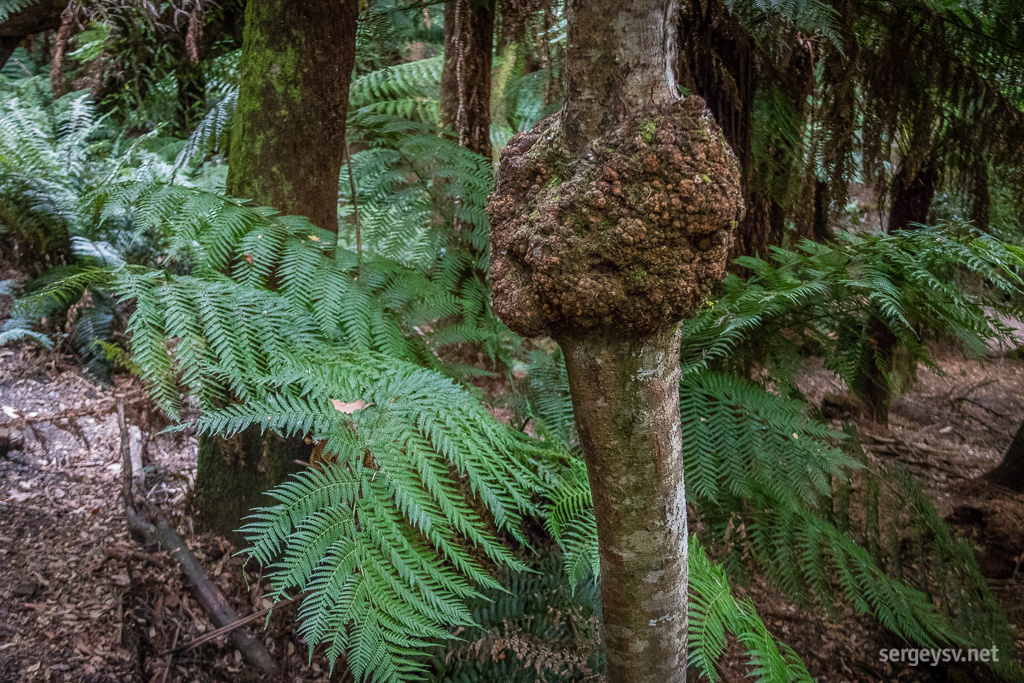 Did I say I love ferns?

This concludes my Tasmanian waterfalls run, but not the rest of the sightseeing: there’s still a few places to visit before my ferry departs. Such as the Great Lake, for example. Not much of a lookout platform there, but it must be popular nonetheless, because a coffee-selling truck is parked nearby, and a gaggle of teenagers is already purchasing. The lake looks impressive and indeed quite big, with a very intricately shaped coastline. 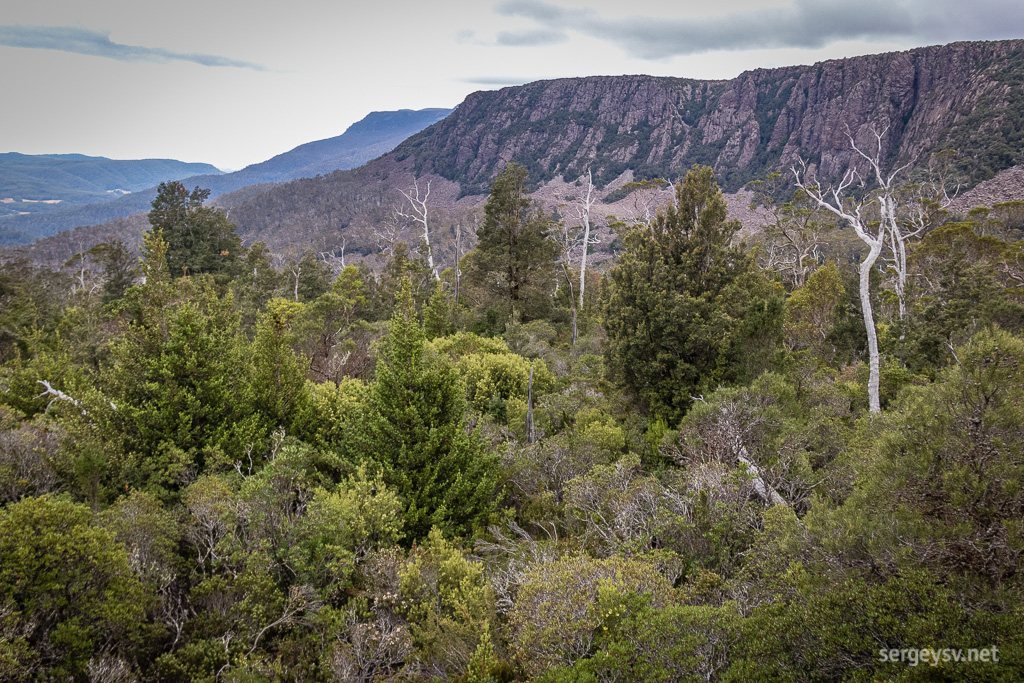 On my way to the Great Lake. 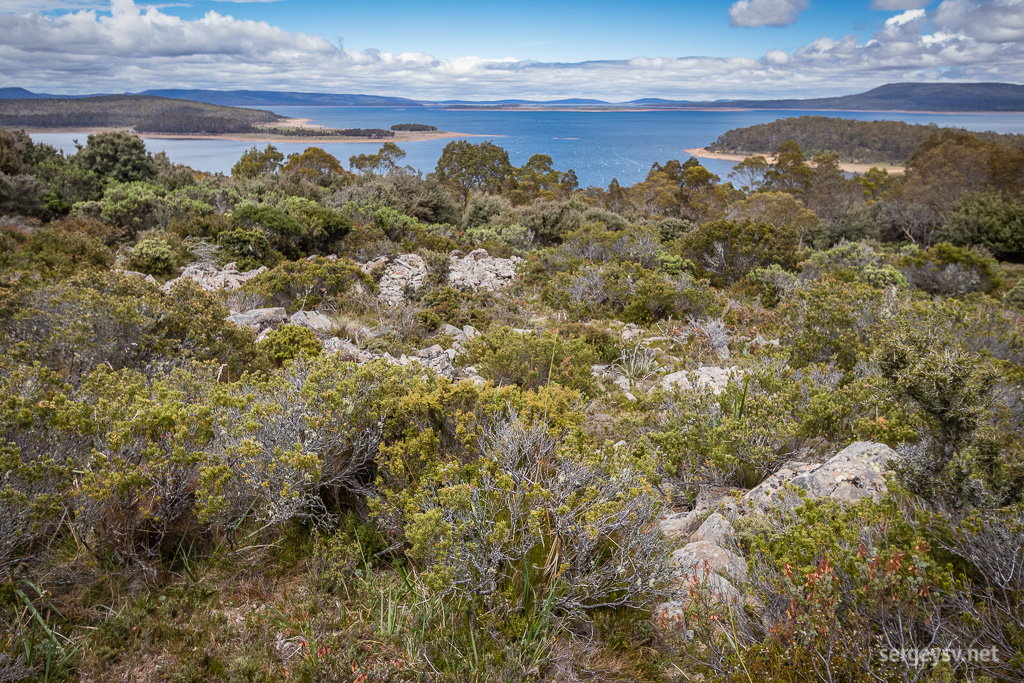 The Great Lake itself.

On my way to the Mole Creek National Park I see a sign pointing to a place called Alum Cliffs, not marked on my map. Should I have a look? Sure, why not. The gamble pays off, and the cliffs are truly remarkable, reminding me a bit of the Leven Canyon earlier. 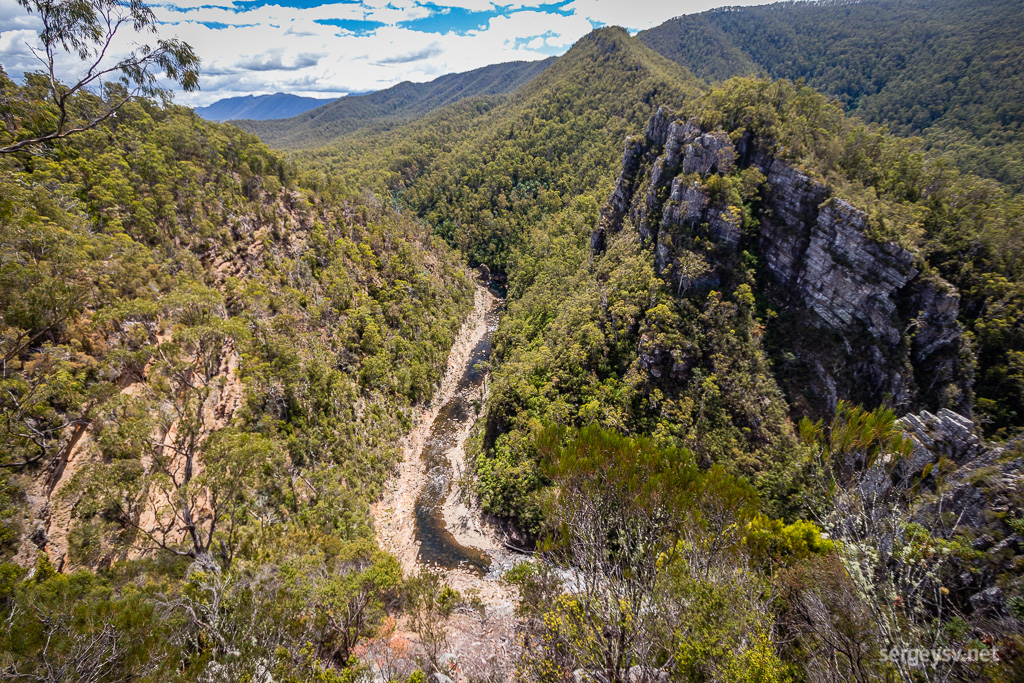 Unfortunately, this delays me on my way to the caves. There are two of them in the Mole Creek park, and it’s quite close to 3 p.m. now, so I pick the King Solomon cave over Marakoopa. This gamble does not pay off: the chosen cave is smaller and does not have glow worms, and I won’t be able to reach Marakoopa in time for another tour, because the last one starts at 3. Oh well. Let’s see what this one has to offer, at least. 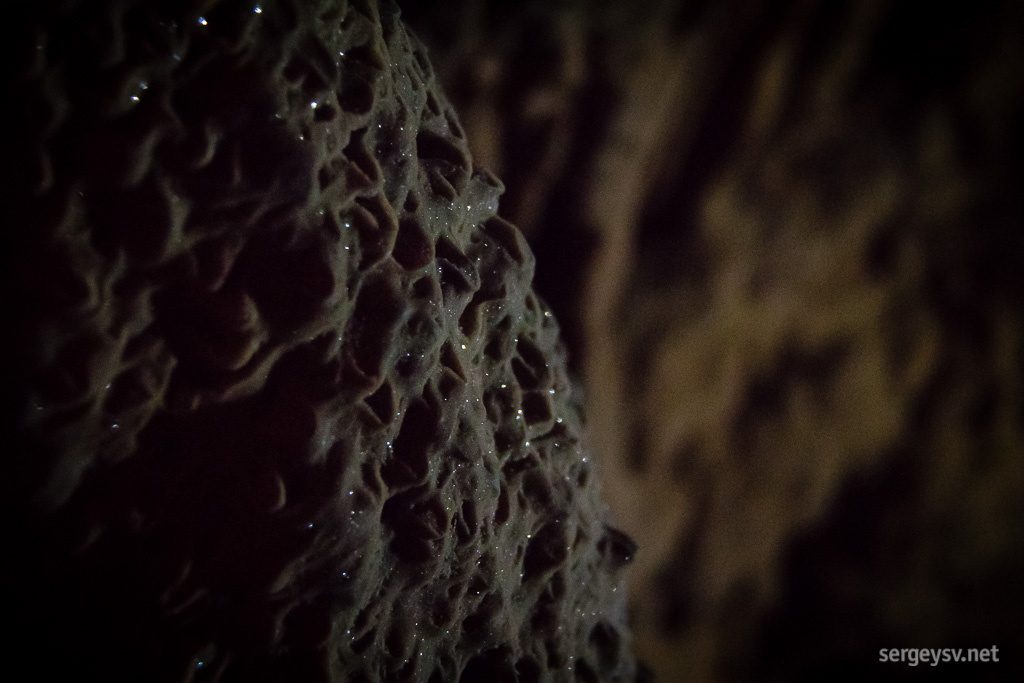 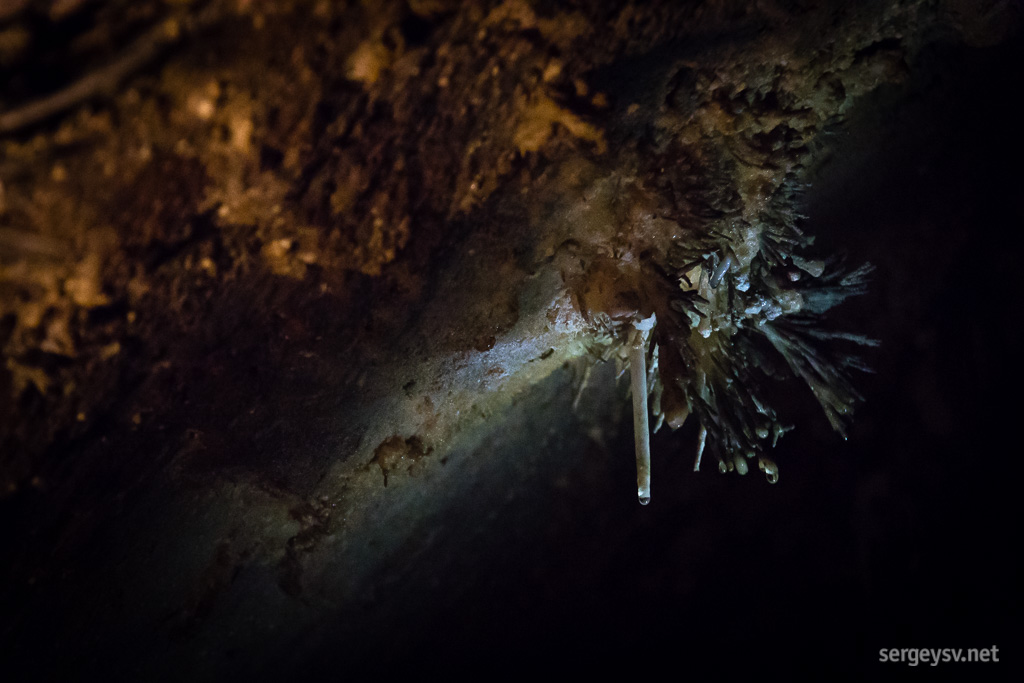 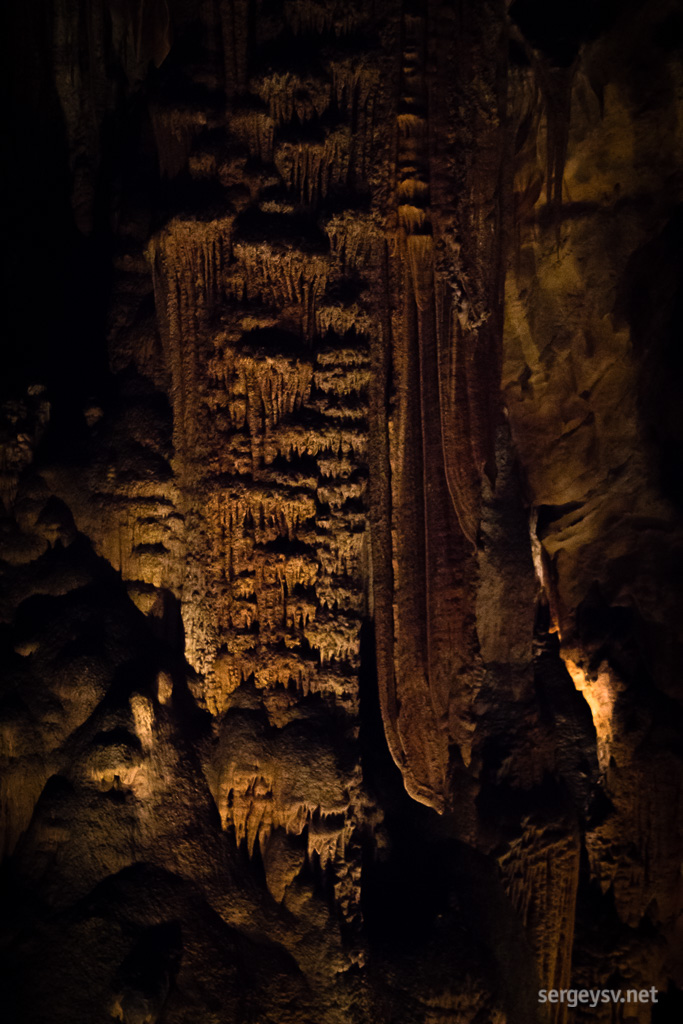 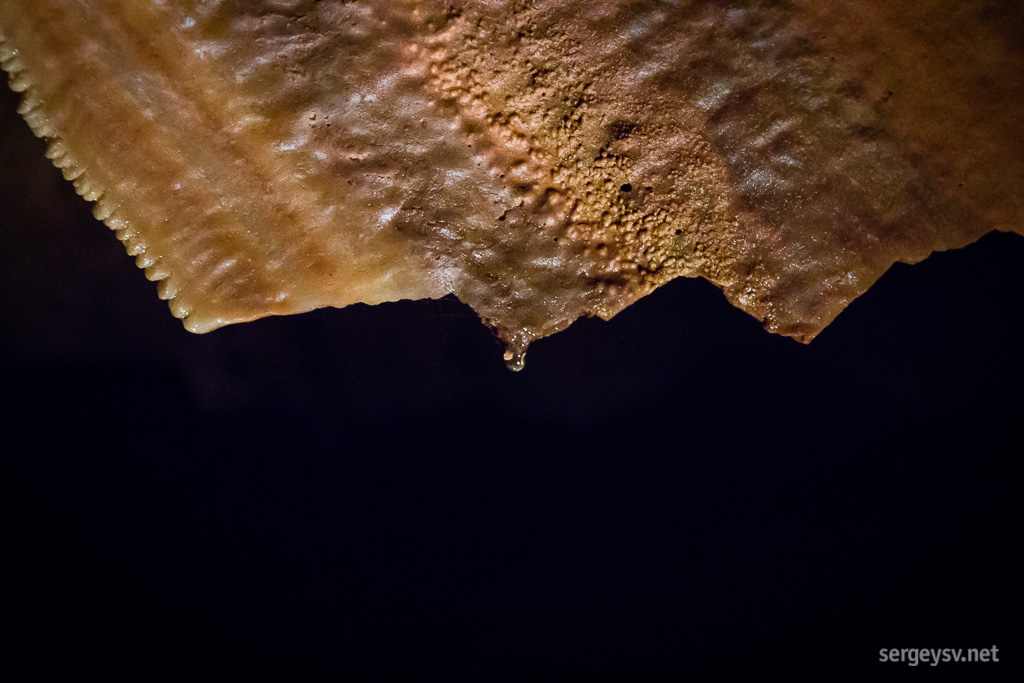 The water’s work is slow but steady.

It’s almost 5 when I stop at the Devils Gullet lookout. No idea what this one’s about either, but there’s only one way to find out. 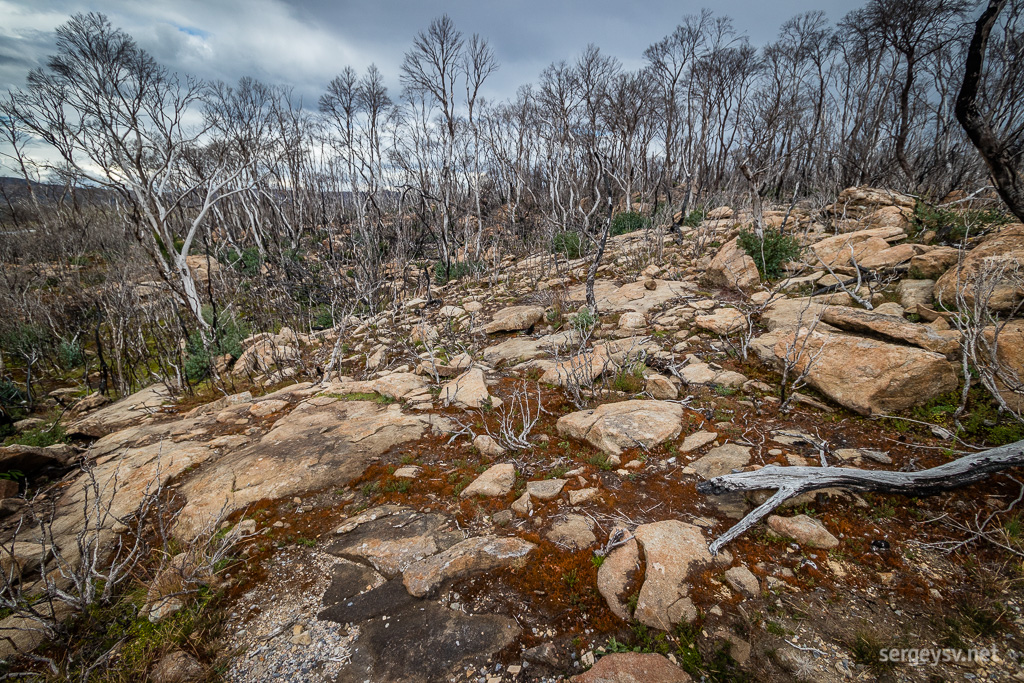 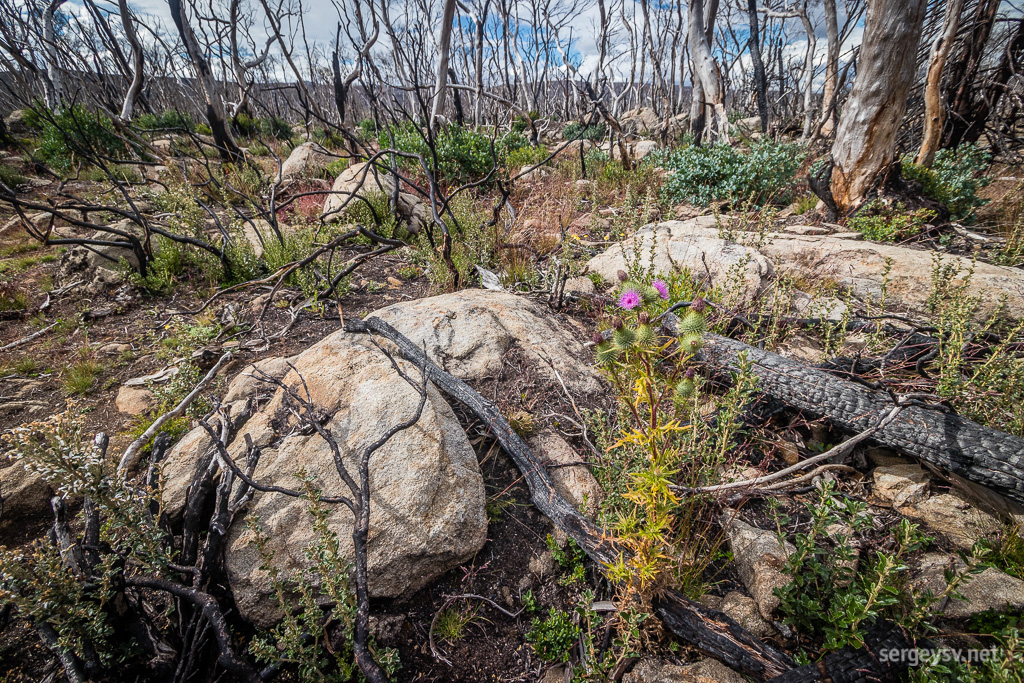 An easy 20 minute walk takes me through a barren-looking alpine plateau to one of the most breathtaking lookouts I’ve seen in Tasmania. A canyon-like gorge is enormous, and the jagged spiky rocks, towering above it, look truly devilish. One can almost see a couple of hobbits climbing those rocks desperately in order to get rid of their Ring of Power.

What? Of course, I know that hobbits can’t possibly be here. You have to go to New Zealand for that. 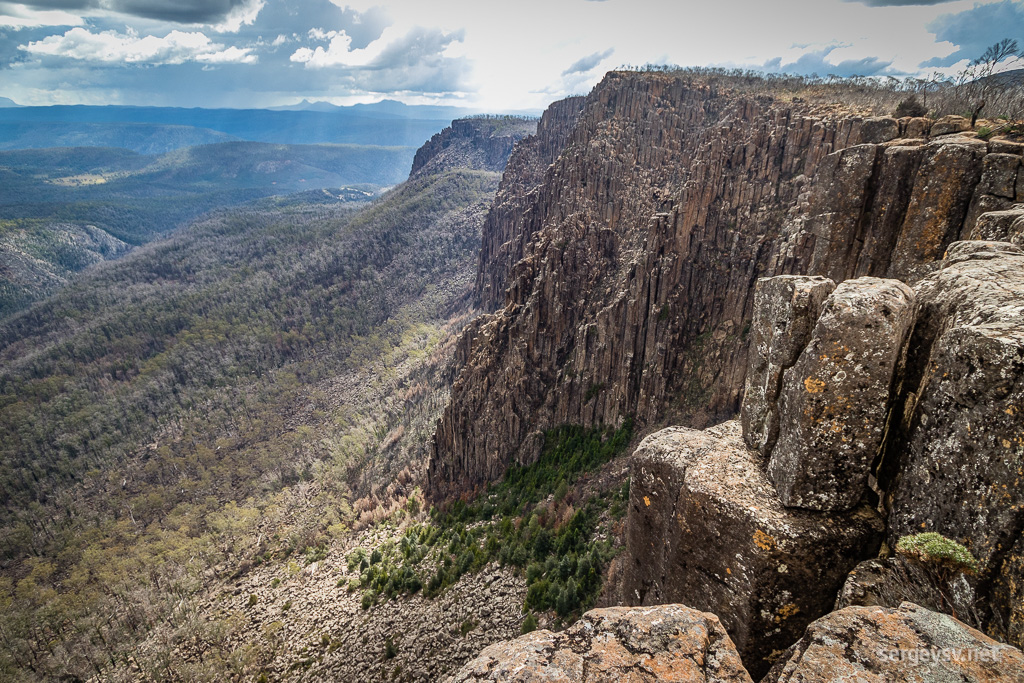 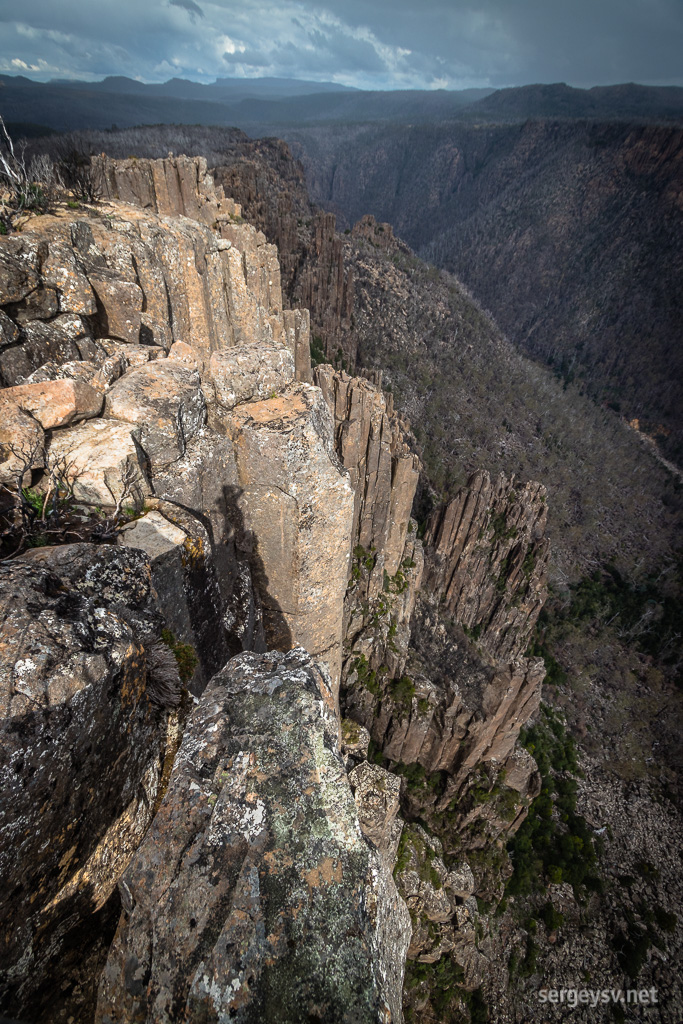 As I sip my tea, enjoying the view and complete lack of people around, Mother Nature treats me with a sight of a lovely rainbow not too far from where I stand. Good thing I left the lookout in time, then: looks like a bit of rain is coming my way from over there. 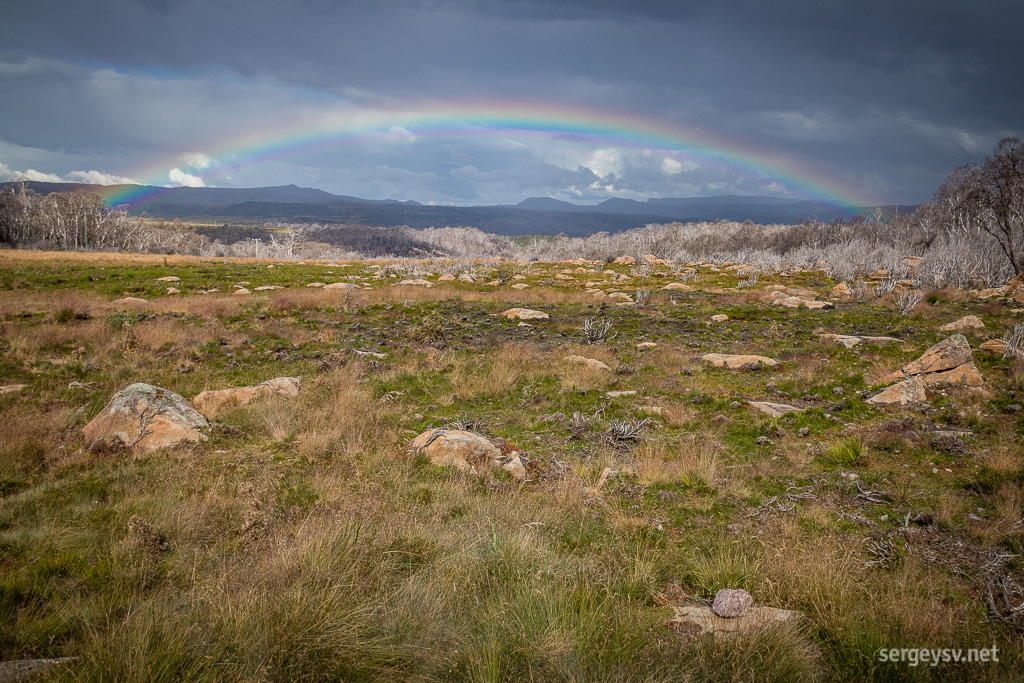 The rest of the road back to Devonport is uneventful yet scenic. A few more lookouts, and a few more twists and turns of those ever-winding Tasmanian roads. Definitely not going to miss those. 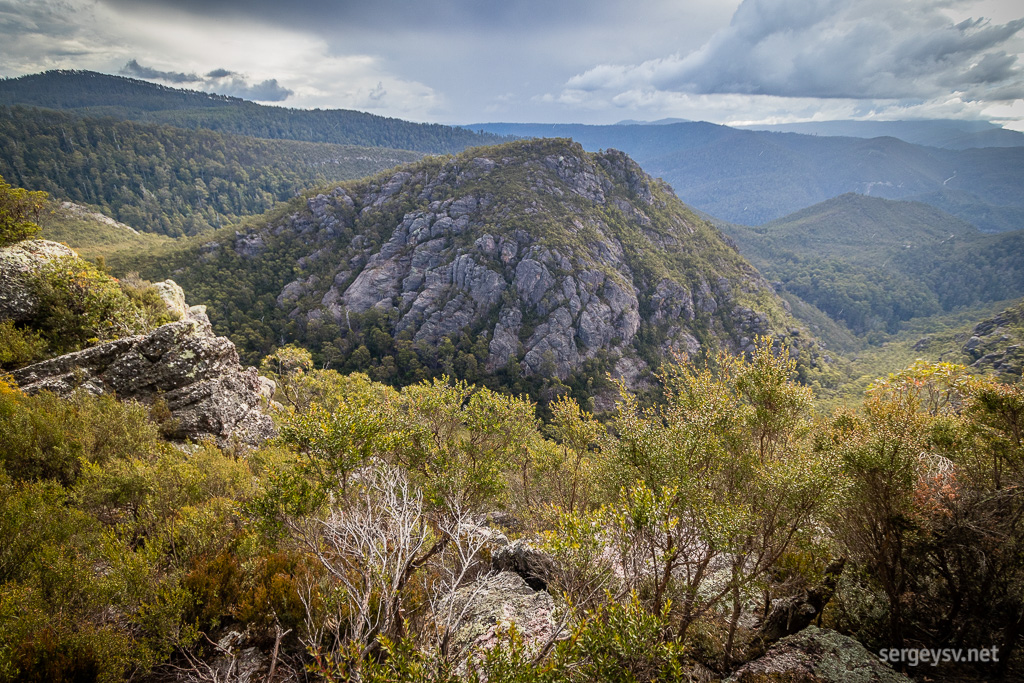 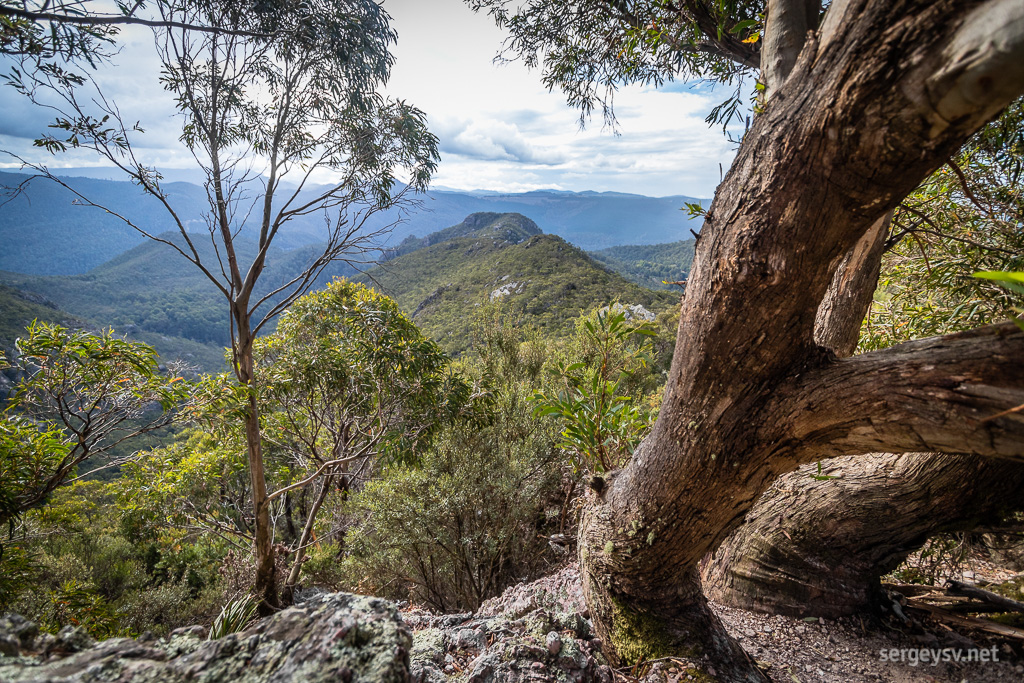 Same, a few steps away. 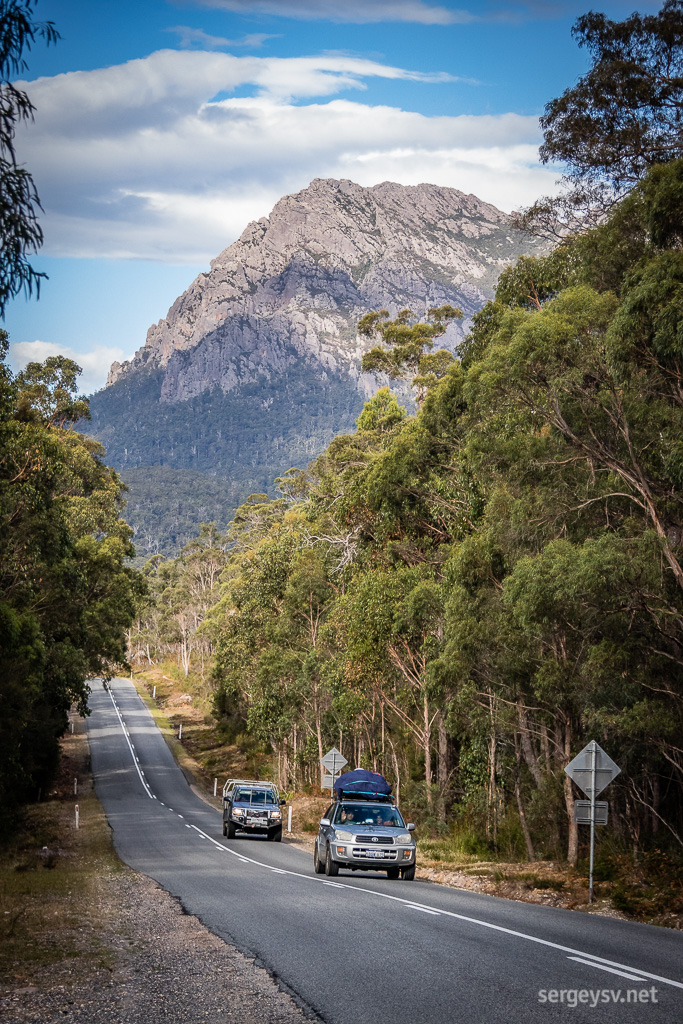 Boarding the ferry doesn’t take as much time as in Melbourne, but I do have to wait in line for an hour and a half instead. I spot another coffee-selling van nearby: apparently, it’s a booming Tasmanian business, and I can’t help but wonder how big is the port’s cut in this.

Back on the ferry, the experience is exactly the same, and even though Devonport at night is not quite as impressive as Melbourne, it looks nice nonetheless as it slowly passes by both sides of the deck. 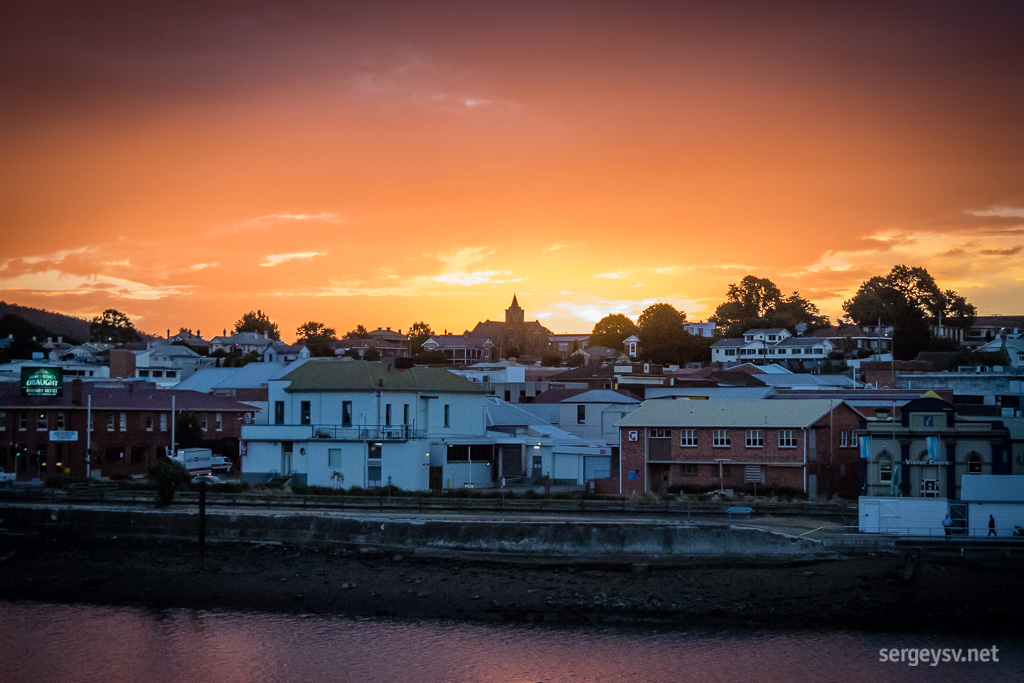