14 Sep 2019 Travels, New South Wales
Well, this has finally happened. I'm moving out without moving in. No rent to pay, no utilities to care about, and no fixed address — apart from the one my friend lent me very graciously, so that I'd have something to put on my driver's licence.

I have become a digital hobo.

The idea has been stuck with me for a better part of the year, and I was slowly but surely taking steps to get there. Mostly it was just modifying my vehicle and camping gear to accommodate really long drives and really long stays. The idea is to stay in one place and work for a week, then move somewhere else over the weekend, then stay there for another week, and so on, and so forth. Doesn't sound too difficult, right? And a certain lack of creature comforts should be counterbalanced by savings that I would be making in the process.

And there's no better time than right now, right? So here we go.

On a bright sunny morning of September the 14th, 2019, I leave the keys inside the apartment and close the door behind me, which locks automatically. The only keys I have right now is a key from the storage locker, where I keep most of my furniture and stuff (15 cubic metres is just enough for that, as it turns out) and another one from the bike lock on the roof of my car, where I keep the hi-lift jack and the traction pads. Hopefully, I won't ever need the latter two, but who knows.

First thing I do on my way out of Sydney is visit Decathlon to buy some extra tent pegs and an extra pair of pants; then I visit a public weighbridge to check if my vehicle is not too heavy. It costs me $20 to find out that it isn't! In fact, I can bring on another 300 kg and still stay within the limits. Good to know.

The traffic is excruciatingly slow on Hume Highway as I finally leave the city limits. No accidents, no breath checks on the way; just slow weekend drivers slowing everyone else down. It takes so long to drive out of Sydney that I get hungry and help myself with some fish and chips at Moss Vale. When I camp, my menu's going to become fairly monotonous, so I might as well enjoy something else on the road while I can.

The drive to Narrandera, where I choose to stay for the night, is uneventful. I visit the local caravan park to take a shower, but the owner refuses me this privilege. If I want to take a shower, he says, then I must either stay for the night or pay the price of a one-night stay; otherwise I am not supporting his business enough. I take a quick walk around the park, but it fails to impress me, so I move on. Then it suddenly occurs to me to check the truckie servo across the road... and sure enough, they do have showers, which are completely free of charge. Much appreciated. Not knowing about that, I'd have gladly paid $4 or $5 to the owner of the caravan park, but in the end he gets nothing. Some people are too greedy for their own good.

My camping spot is slightly away from the town, in a nice and quiet forest reserve next to the Murrumbidgee River. The place is pretty, but not too warm; during the night the temperature drops to 3°C. Luckily, I have plenty of blankets. 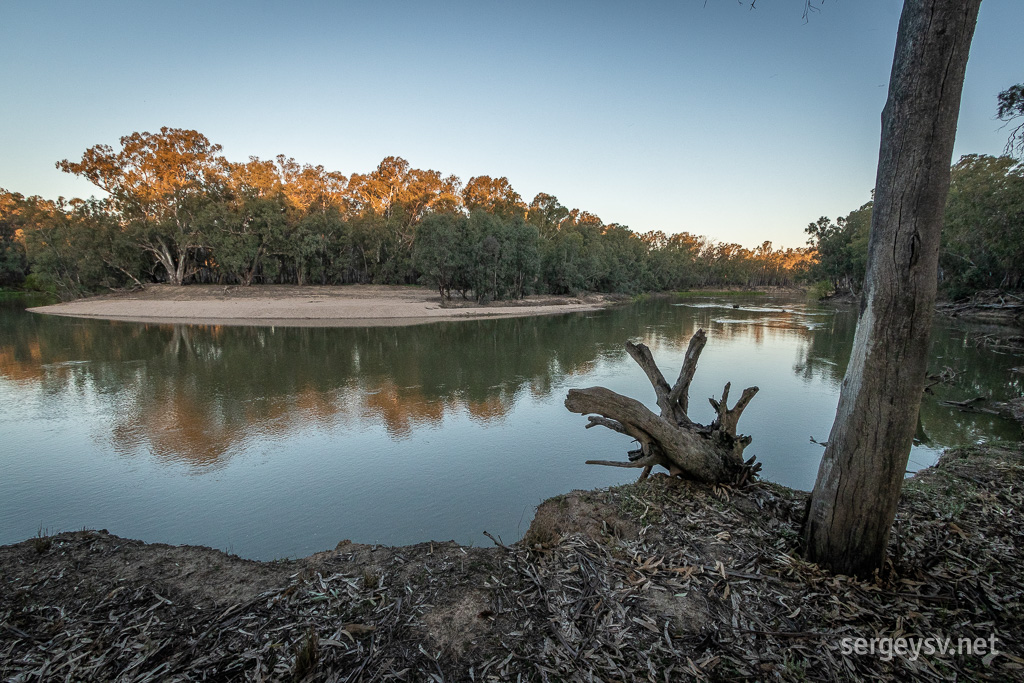 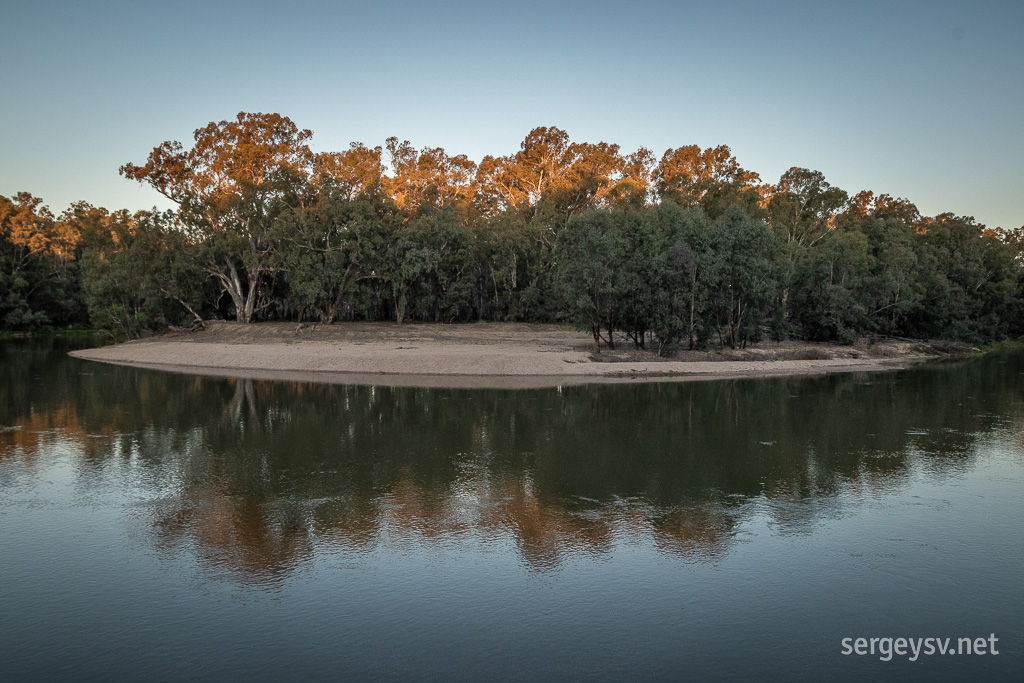 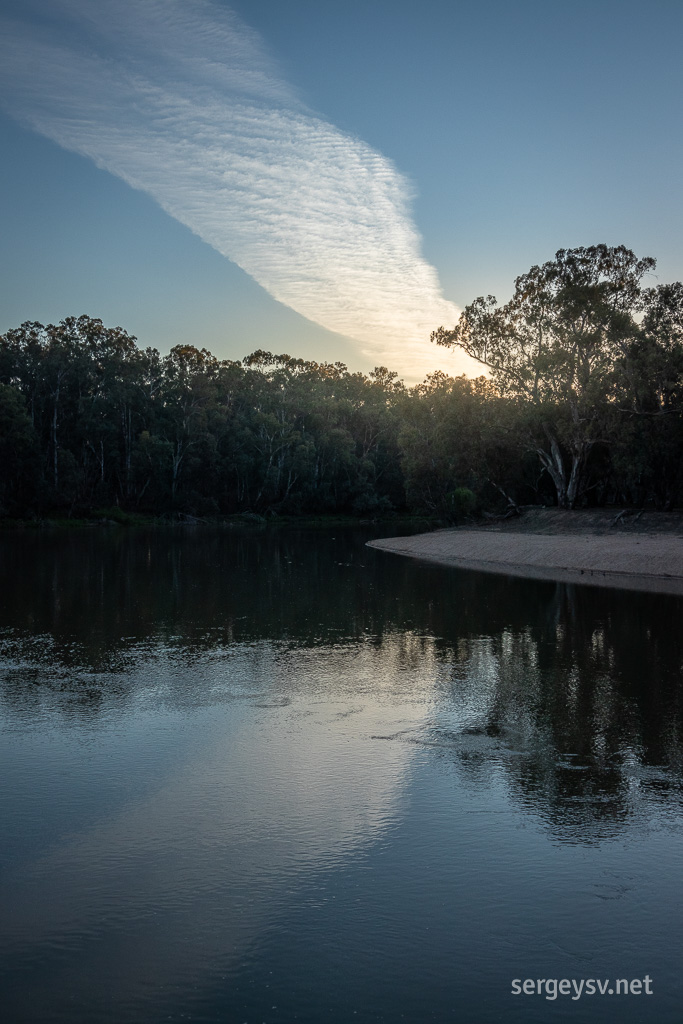 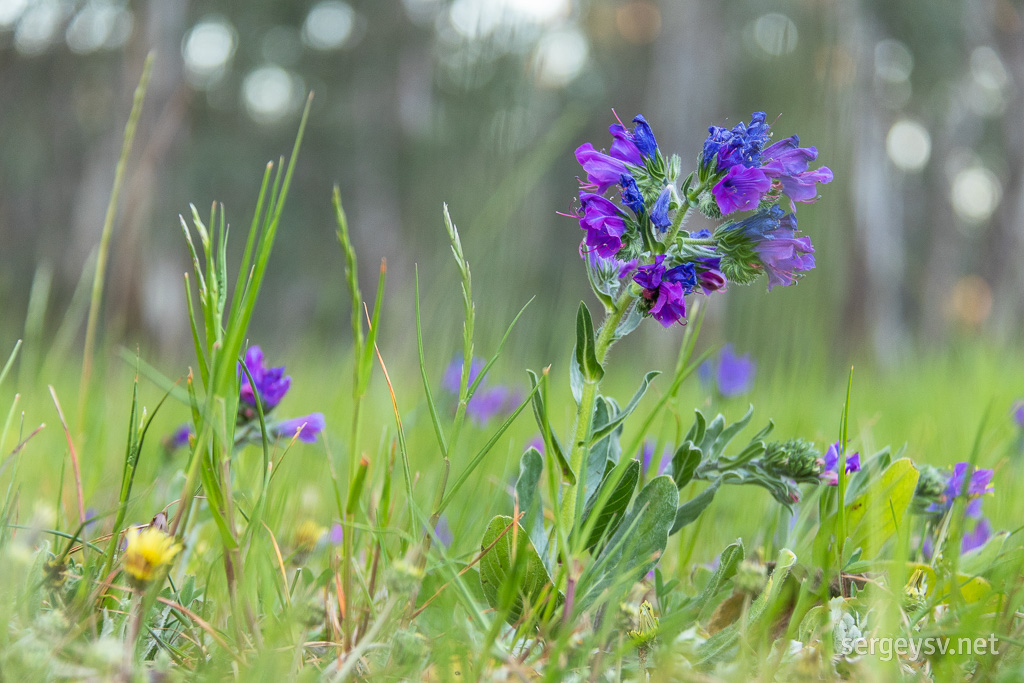 The next day, on the other hand, is quite hot and windy, and it's marked by The Three Misfortunes. The first happens when I suddenly realise that I forgot two tent pegs and two guy ropes on my camping spot by the river. Three hours into the day's journey already, so it's too late to go back. I have spare pegs and ropes, of course, but it still hurts. The Second Misfortune visits me in a form of an angry magpie who swoops at me at another rest stop; I didn't even see it coming, and the stupid bird gives me quite a startle, plus a slightly sore left ear where it snaps me with its wing.

The Misfortune #3 is the longest and perhaps the stupidest of all. As I approach the South Australian border, I already prepare my contraband I'm supposed to get rid of on the border: 1 (one) apple and 1 (one) orange. As many of you might know, there are certain restriction on how certain plant materials can move around Australia, and fruit are a definite no-no. I diligently stop at the check point and hand the bag with the fruit to the officer... but it turns out that by doing so I commit an offence. It turns out that since January people are supposed to dispose of their fruits and veggies at the quarantine bins before they reach the checkpoint; yet none of the signs mention the fact that I cannot get rid of them at the checkpoint itself — which was totally fine to do two or three previous times I crossed the border. I have to go through 15 minutes of humiliating paperwork with a prospect of being issued a $300 fine. So much for being diligent and law-abiding and handing my forbidden fruits to the guy on my own accord. If you're not doing it at the quarantine bin before, you are, apparently, a criminal these days. 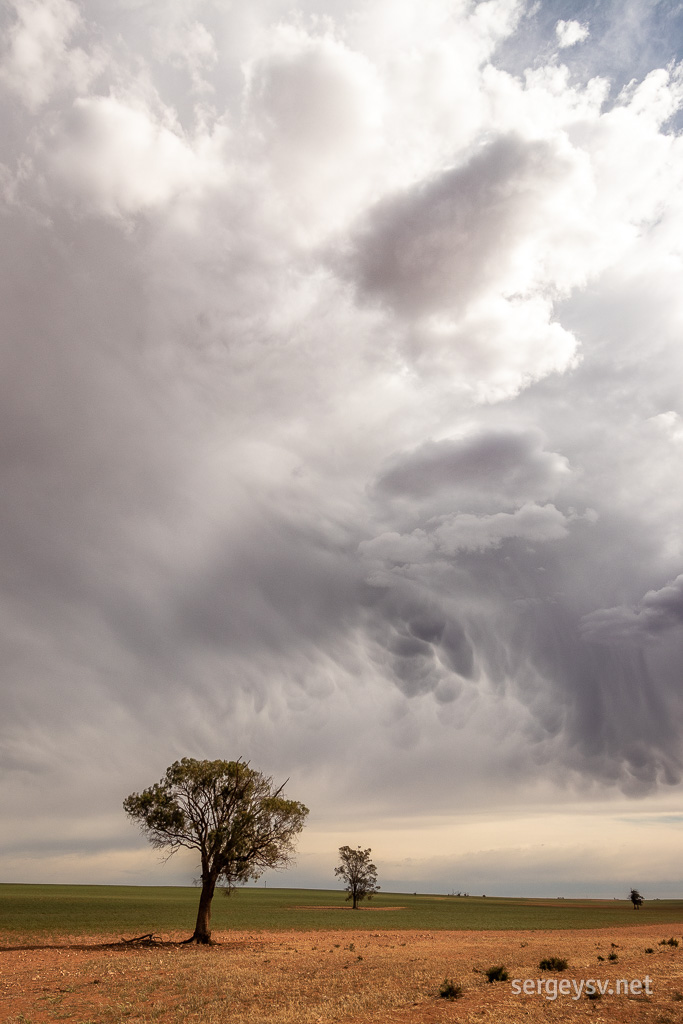 Crazy cloud formations on my way between NSW and VIC. 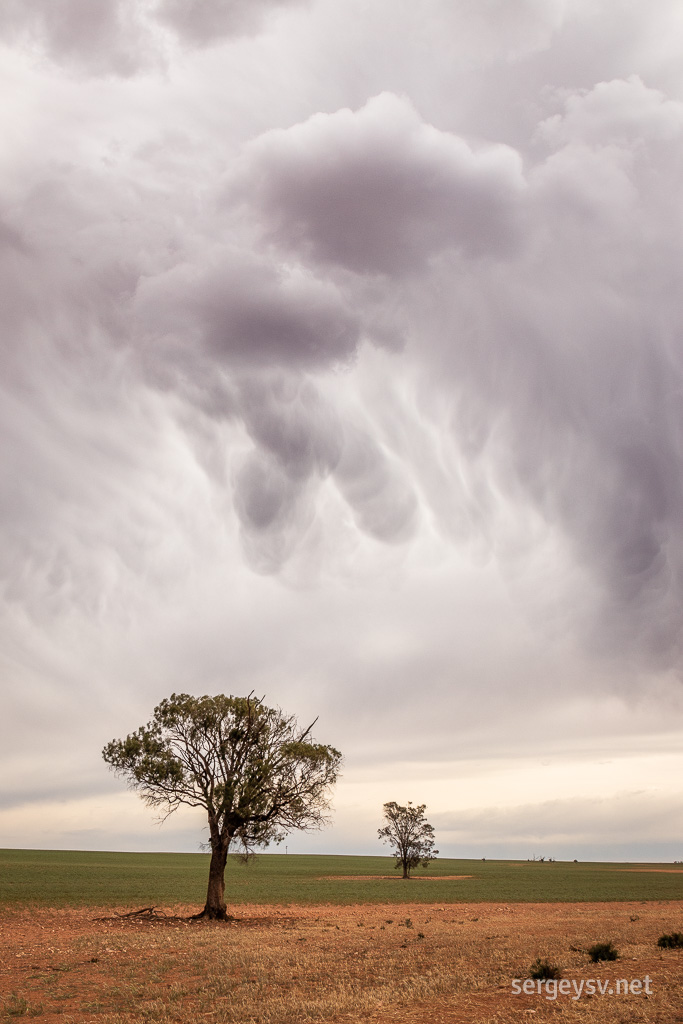 Changing quite rapidly, too.

Somewhat annoyed by all this, I finally arrive at the spot where I'm supposed to stay till next Friday: a beautiful lakeside near Barmera. The place has a lot going for it: 1) it has plenty of mobile coverage; 2) it's very scenic, and 3) it's completely free of charge. The sun sets quickly, but I do manage to take a few good snaps as I set up my camp. The first weekend of being a digital hobo is over; time to start work tomorrow morning! 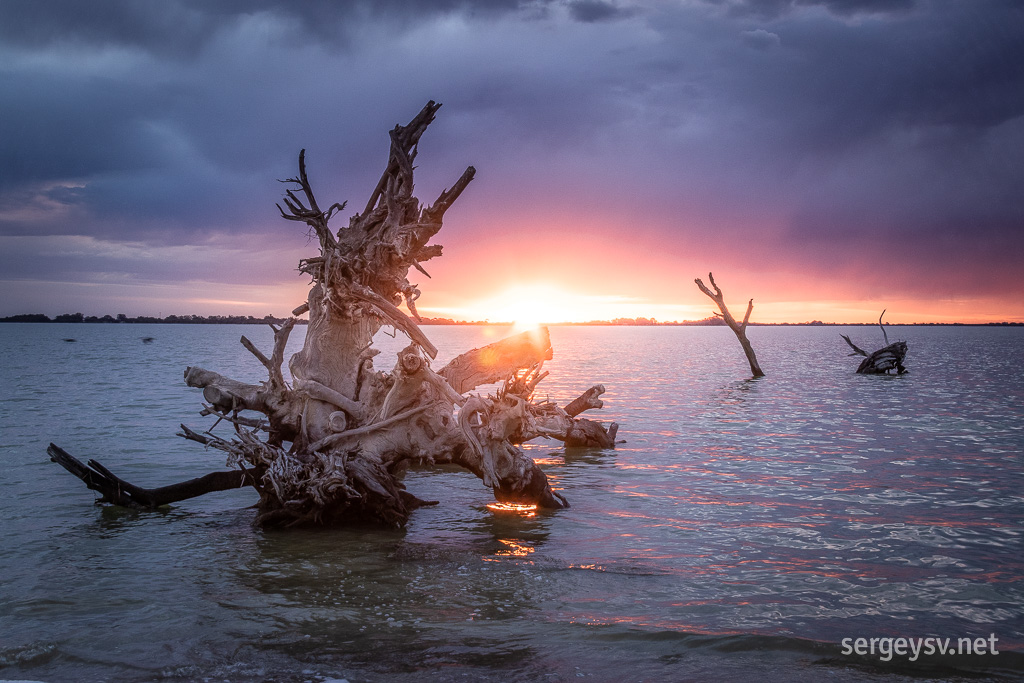 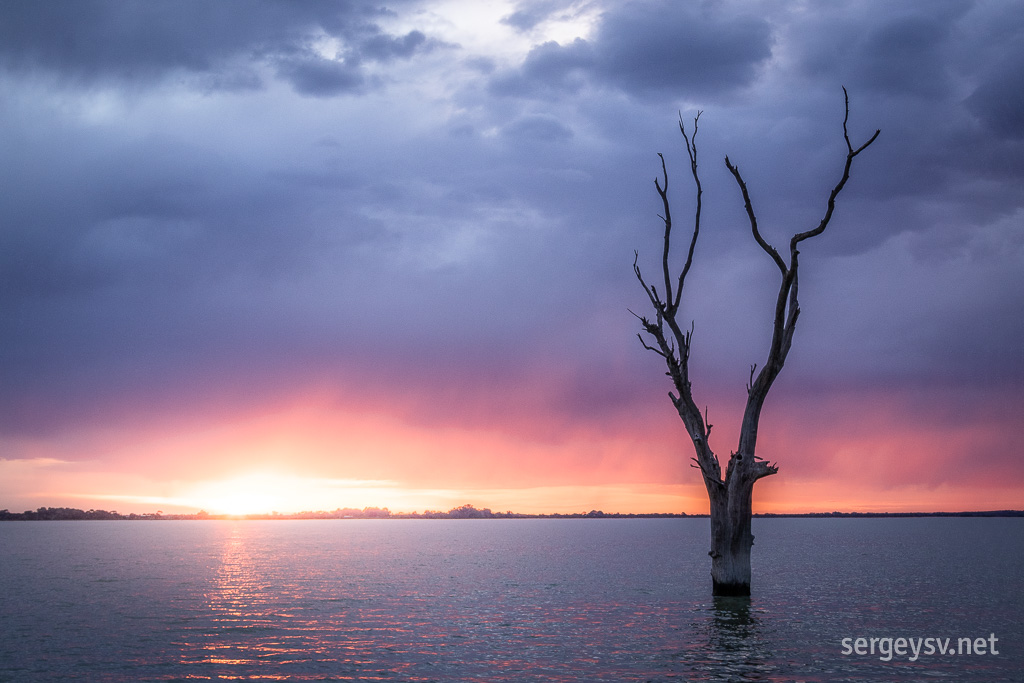 So does the sunset!