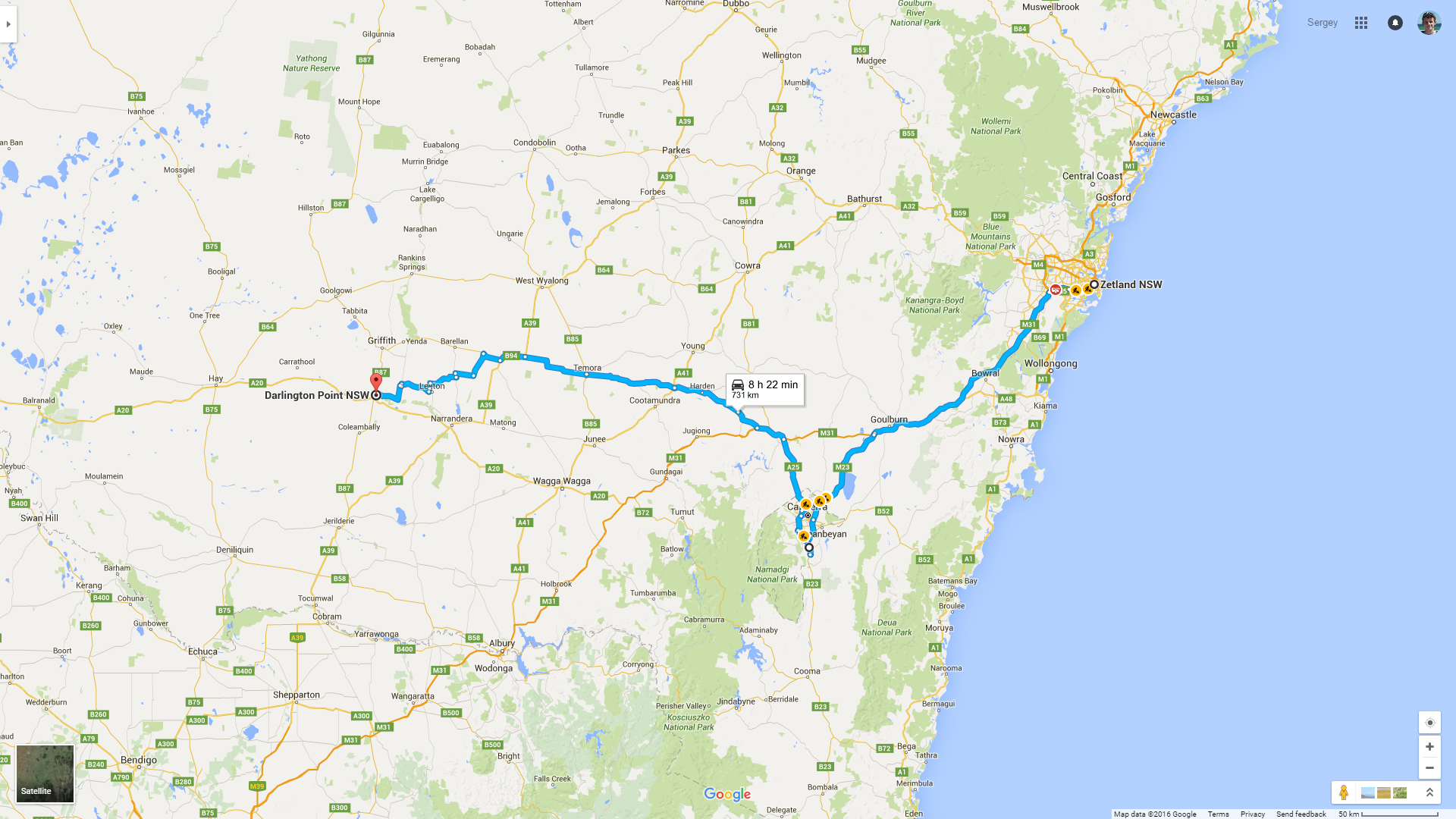 In the morning the journey continues. It's quite cool outside now: I'm very much in the temperate climate zone these days, and the autumn is close. Quite a difference from the perpetual 30° in the tropics.

From the Pacific Highway and its endless roadworks, I turn to the Hume Highway, deeper inland towards Canberra. The weather and the landscape are radically different now: the grasslands are yellow and withered, the trees are almost bare, the horizon is covered in haze, and for some reason there's a smoky scent in the air, even though I can't see any fires around. Autumn is not even close in this region: it's right there. I buy some fresh apples from the vendor at the fuel station, and their crispy taste makes me feel even more autumnal.

And here's Canberra, at last: the capital of this huge country that I've been traversing for so long by now. The first thing I see above the hills is the local TV tower, which is visible from almost everywhere. 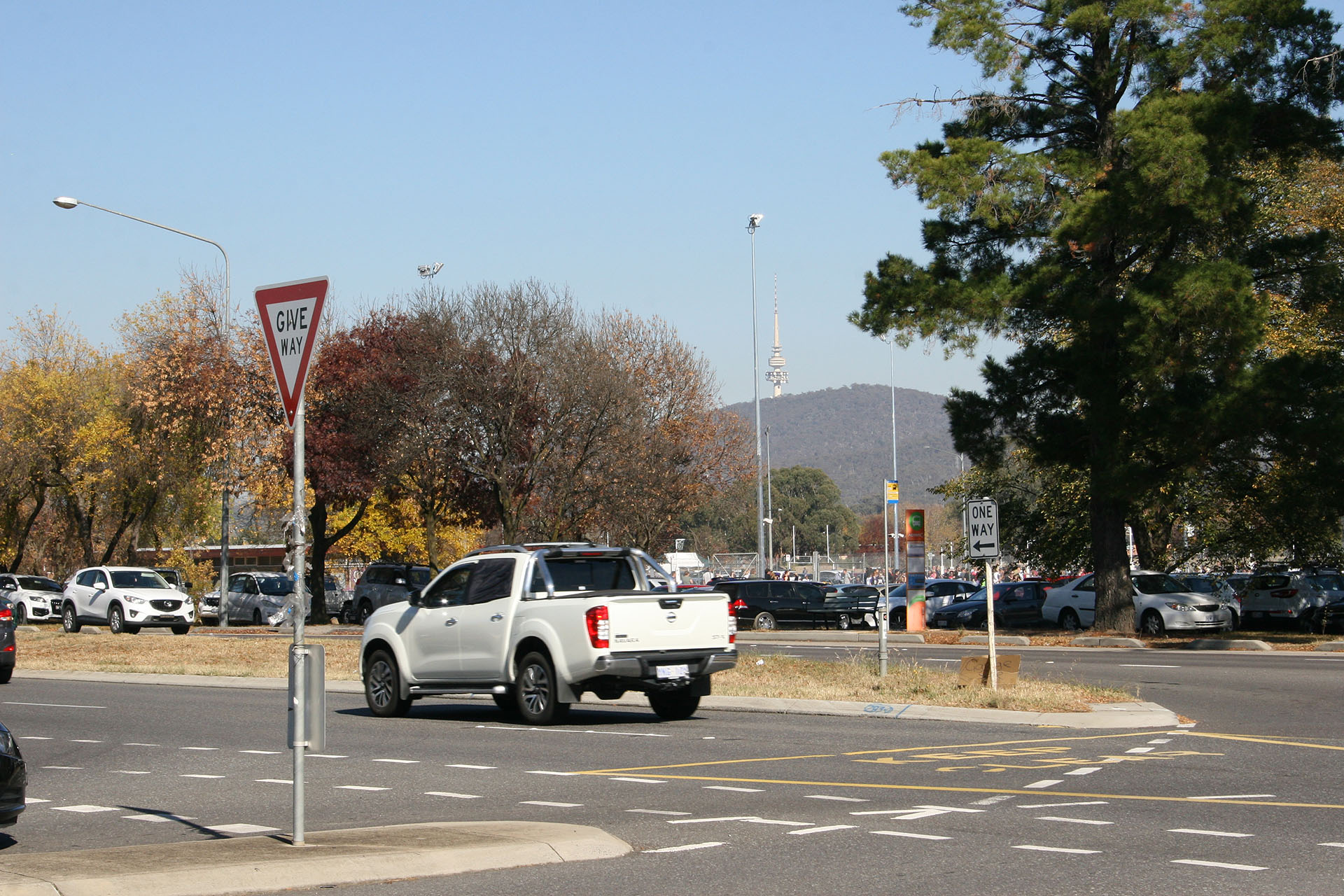 Canberra looks very lovely and cozy. The city is not too big (population 200,000), but somehow it does have a certain business-like atmosphere. I head straight towards the city centre, seeing a lot of apartment blocks along the way, 2 to 6 storey high. More distant suburbs consist of traditionally detached houses, which look sturdy and solid: a good strategy for the local climate, which can give frosts and even snow during winter. 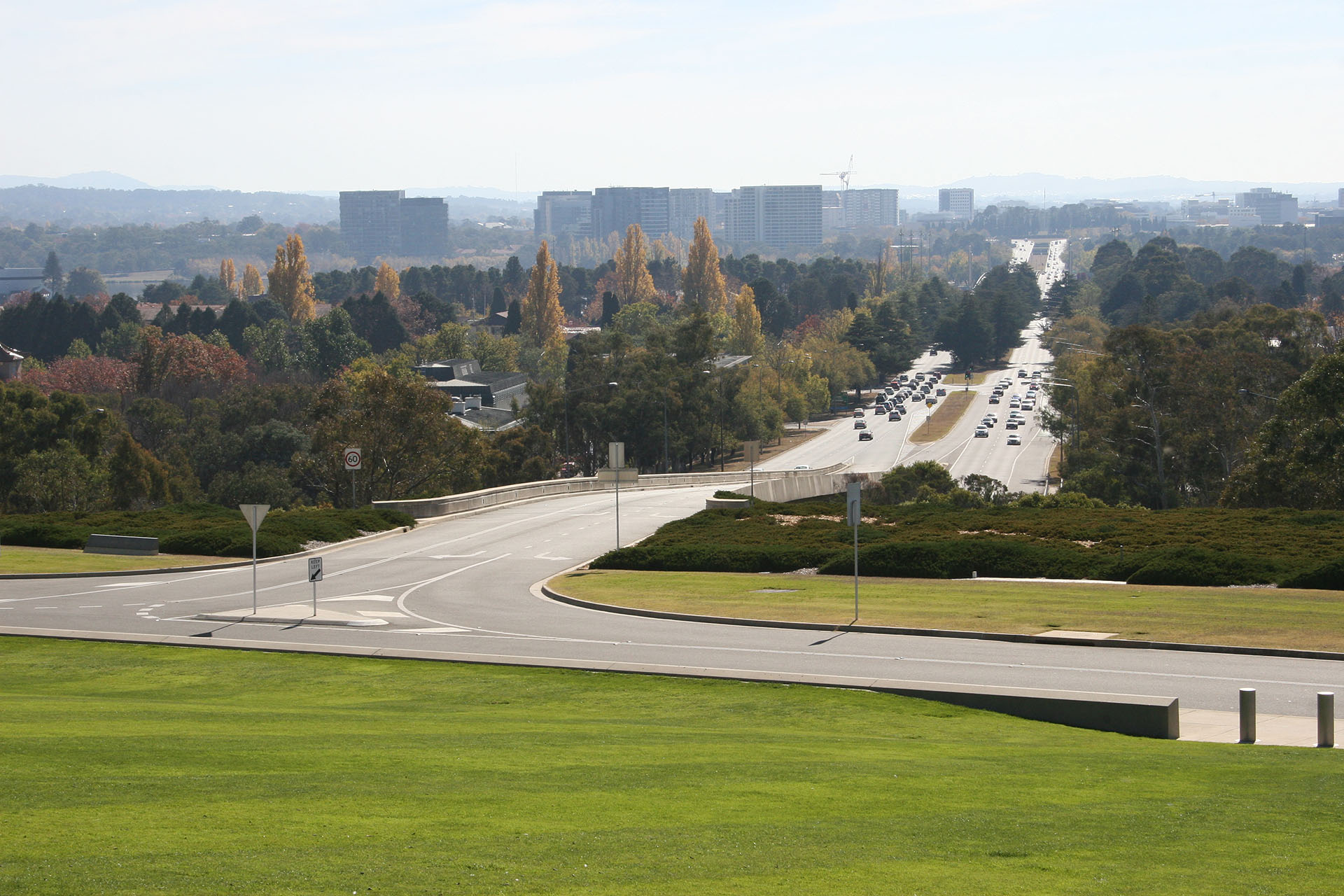 The capital in autumn. That street over there is the one I used to get here.

Of course, I make a stop at the Parliament House, which has a very convenient (and free) underground parking. There is no wind today, unfortunately, and the biggest Australian flag in the country is hanging lifelessly on its pole; but even this doesn't stop the building from looking powerful and significant. A handful of tourists (mostly Asian) is practically unnoticeable on the vast square. I think about getting into the building, but then change my mind and simply enjoy the view of the surrounding city. 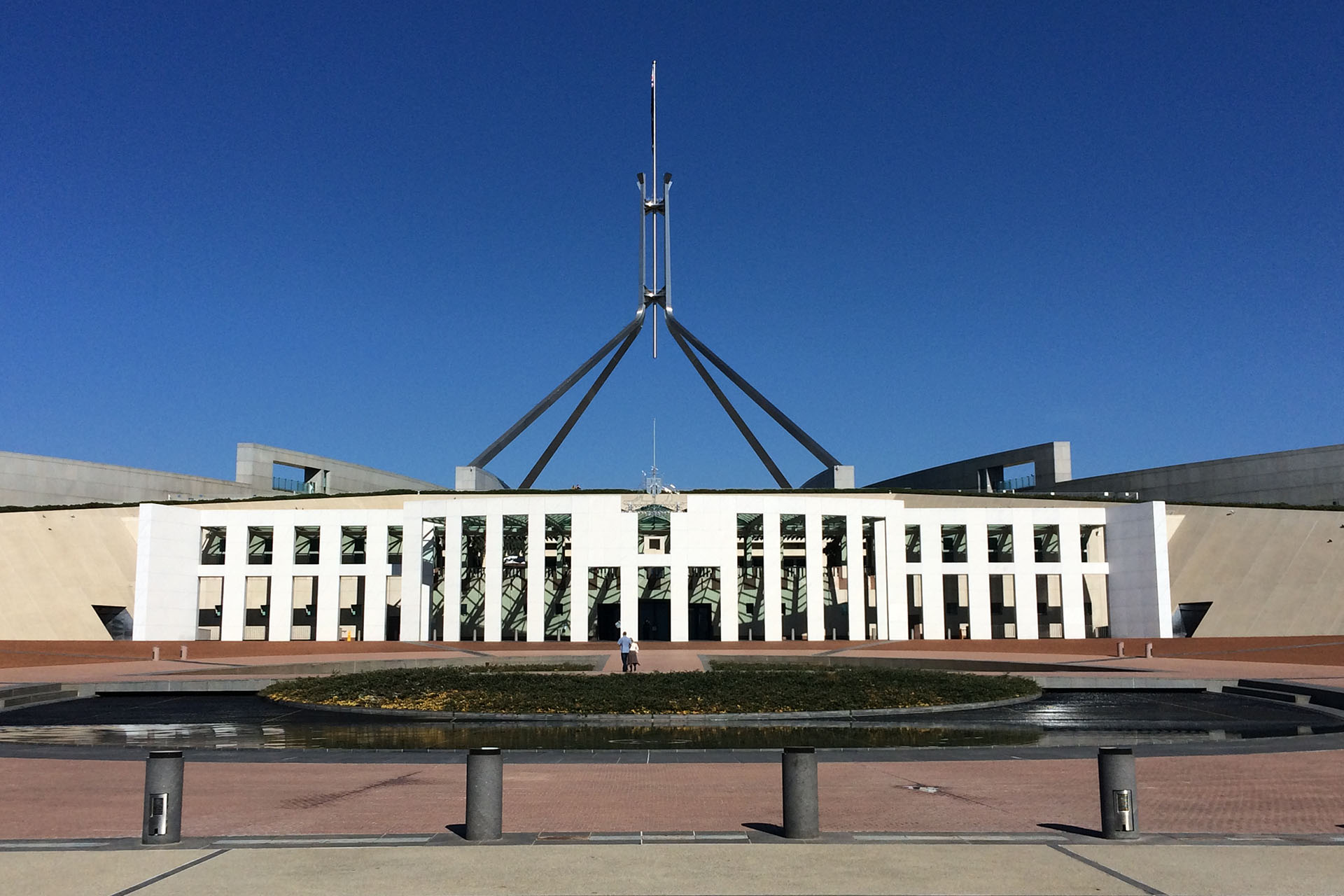 Once I've had my fill of the Canberra sightseeing, I leave the sunny capital… and then suddenly stop on the outskirts. The last major point of interest on my lengthy journey is the Great Ocean Road. But do I really want to see it that much? I already saw its self-proclaimed sibling, plus I didn't even like Melbourne when I was there. What if I just head straight towards Adelaide and make it two days till home instead of three? In the desperate fight between fatigue and duty fatigue takes hold, and instead of driving further south I head back to Canberra to take a turn west. 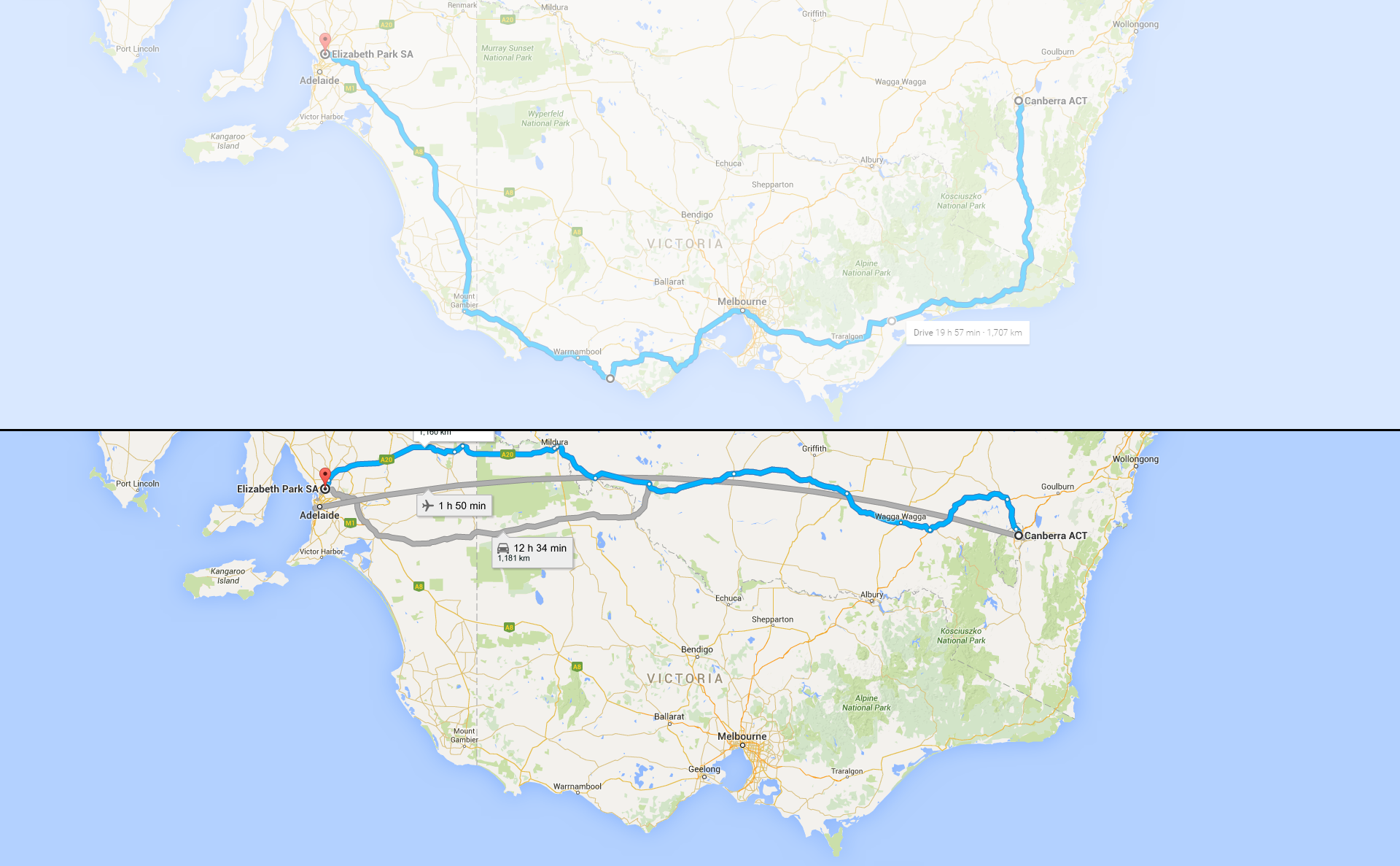 Another change of plans.

No roadworks whatsoever, and the speed limit is back to normal 110. There's only so much a tired motorist needs for happiness. Fields and pastures and small towns fly by, and then I finally see “Adelaide” on a road sign for the first time. Home is getting closer and closer.

I enter Riverina. Murray, the largest river in Australia, is very close now, and the local agriculture benefits from it enormously. My last stop for the night on this journey is in Darlington Point, a small regional town. The manager of the caravan park asks me skeptically whether I'm ready for the full night of rain (which the forecast predicts very confidently), but I don't really have a choice, do I? I quickly set up my camp on the spot he gives me. 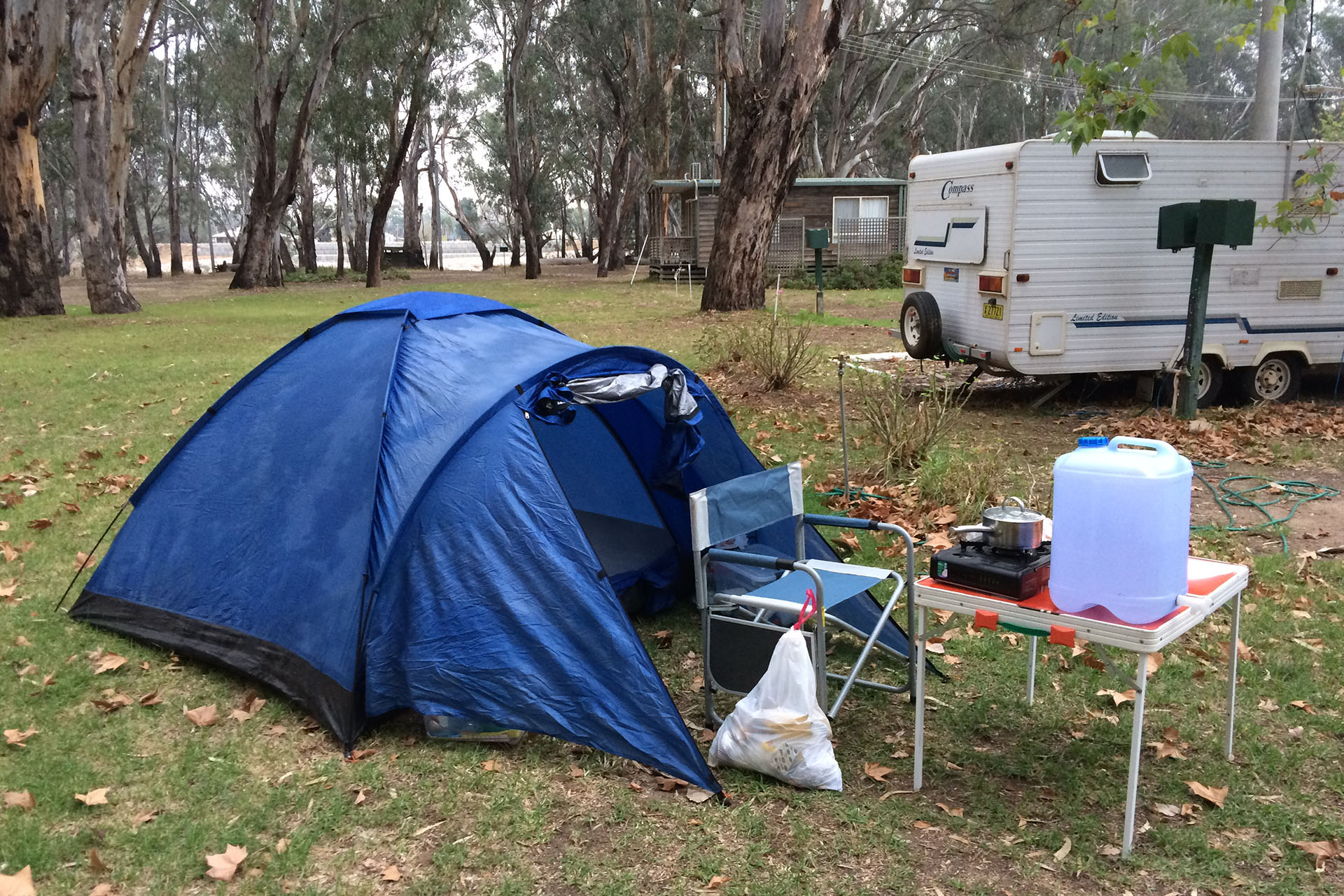 I spend the final minutes of the dusk to take a brief walk along the river bank (it's not Murray, of course: just one of its many tributaries). It's warm and almost windless, and the sky is full of slowly rolling clouds. Yep, it's definitely going to rain. I bring the gas cooker into the tent, along with some food: tomorrow I'm going to have a breakfast in my bed. 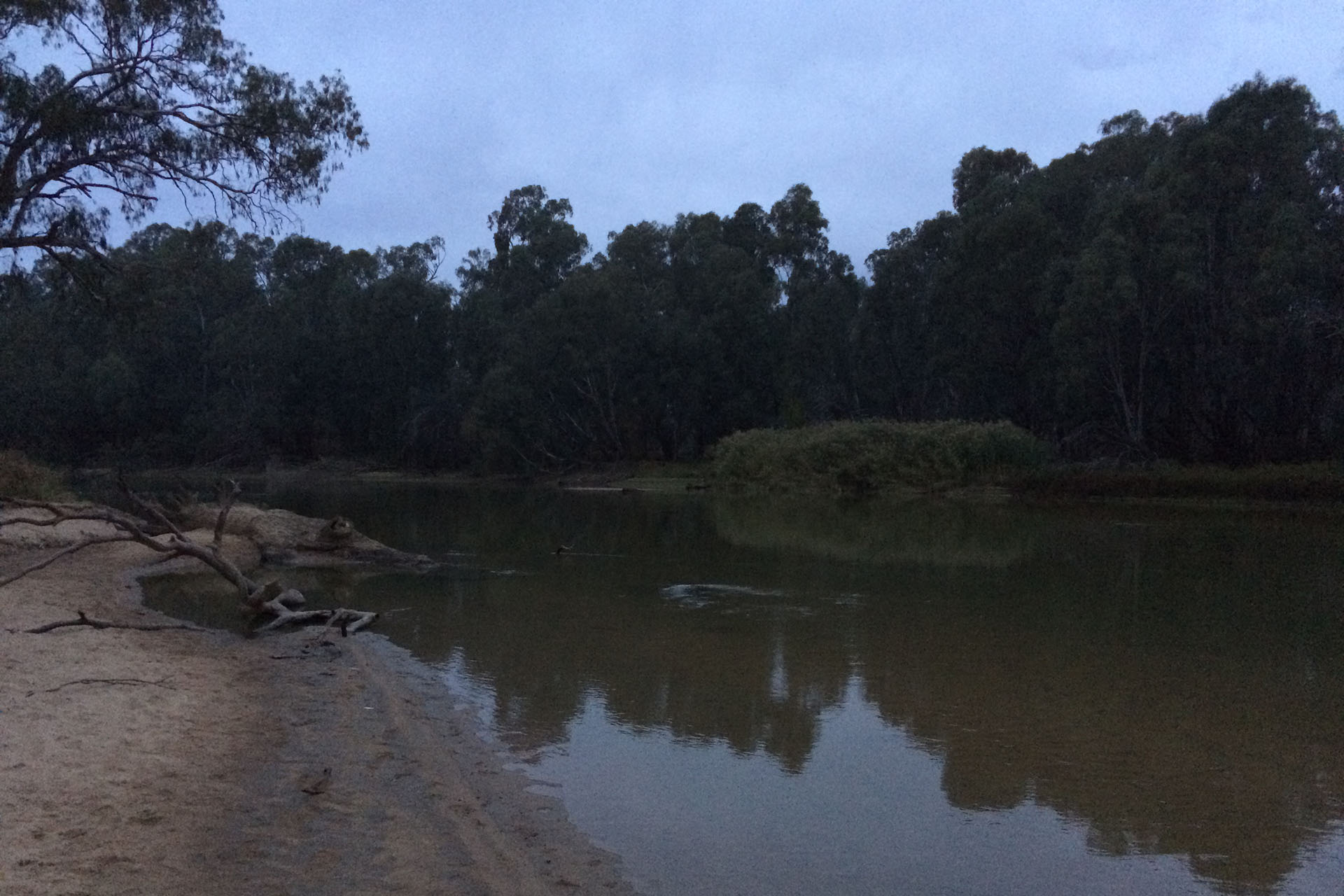