North and South of Stirling Range 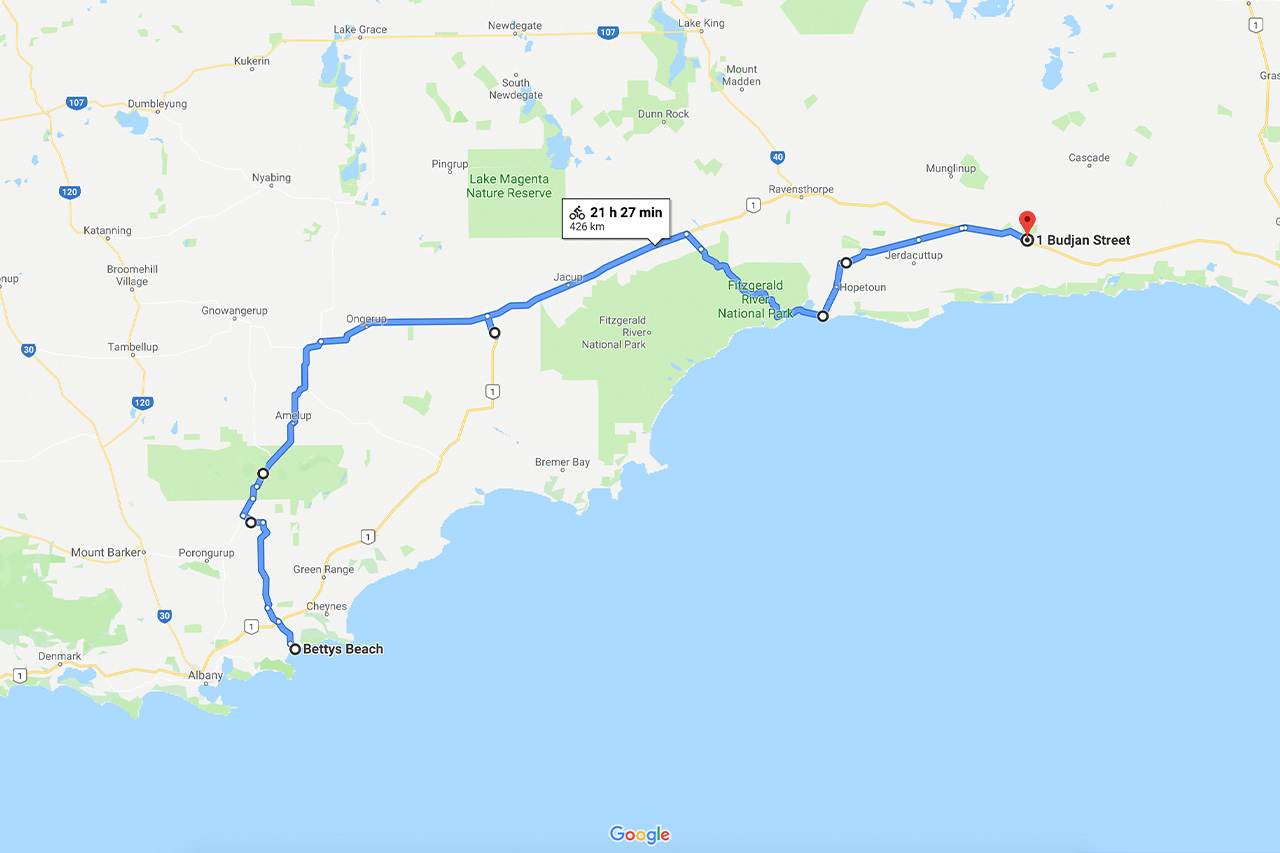 There's a Russian saying that goes something like: how you meet the New Year's Eve is how you spend the rest of the year. If that's true, then my year is definitely off to a promising start. What else can be better than having a quiet drink under the stars in a good company, surrounded by beautiful scenery?

However, today I'm parting ways with Alen and Dessy: they're going their way, and I'm going mine. Bye, guys! Now I'm setting my sight on another seen-before destination: Fitzgerald River National Park. The weather wasn't up to scratch last time I was there, so perhaps I'll have more luck this time?

It's certainly a lot sunnier than April 2016, that's for sure. The Mount Barren looks very imposing and prominent as I approach the park and enter it from the east. Still, it's quite close to the sea, so it's not as dreadfully hot as it is inland right now. I make my way through various lookouts and places of interest, which doesn't take me too long, and exit the park via the unsealed road (which is quite decent) up north. Hakea plants, unique to this part of Western Australia, grow here in abundance and make me happy by their very presence. 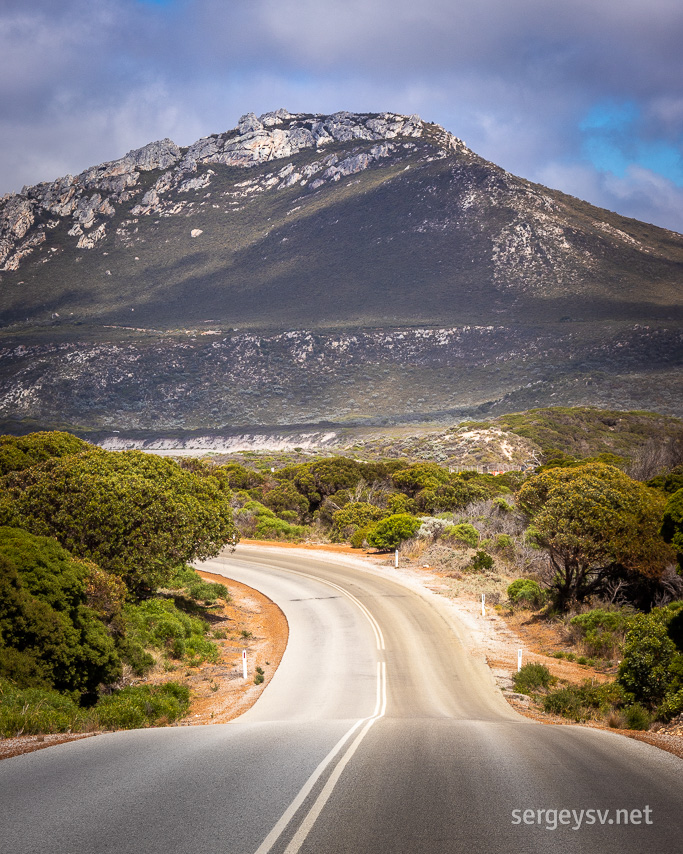 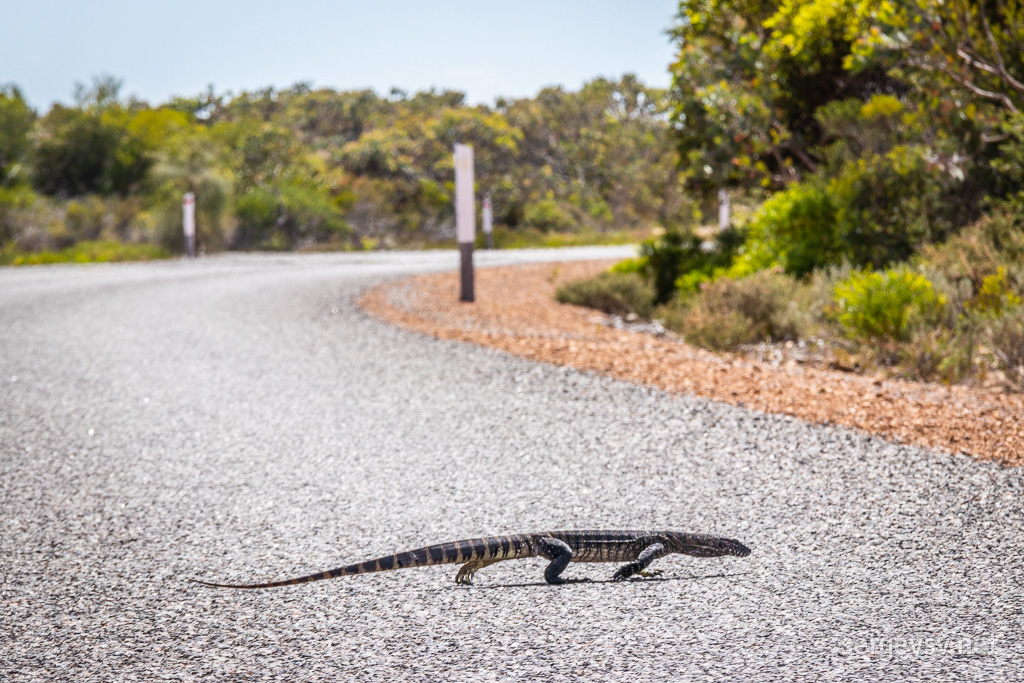 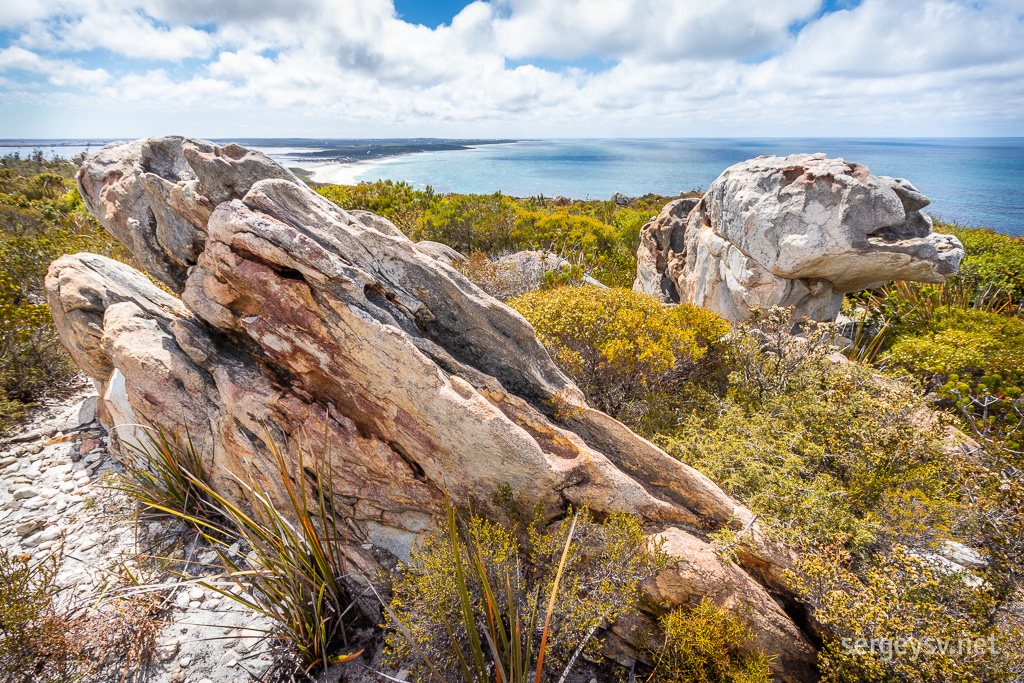 Another sunny day ahead. 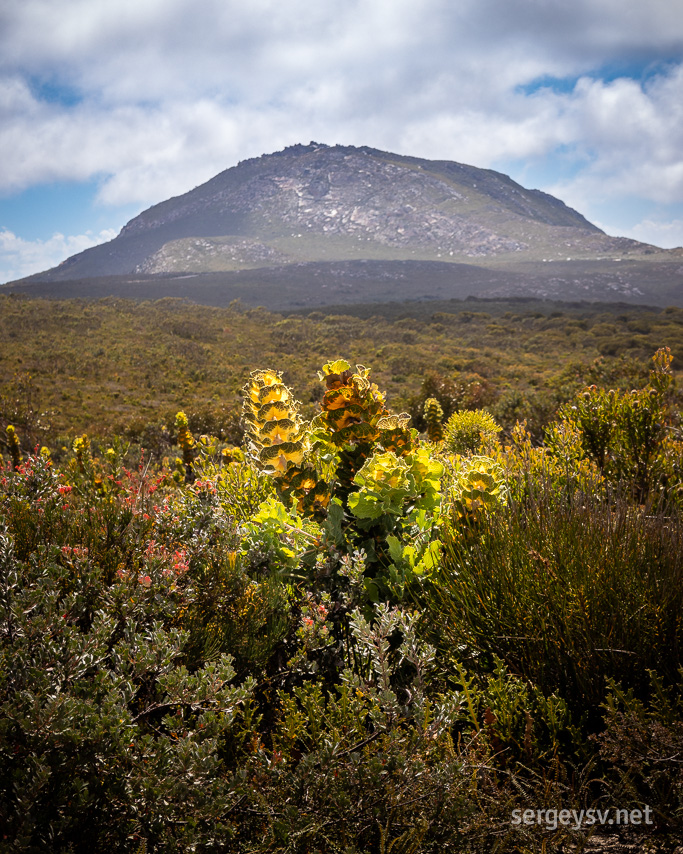 Mount Barren (view from the back) and a hakea. 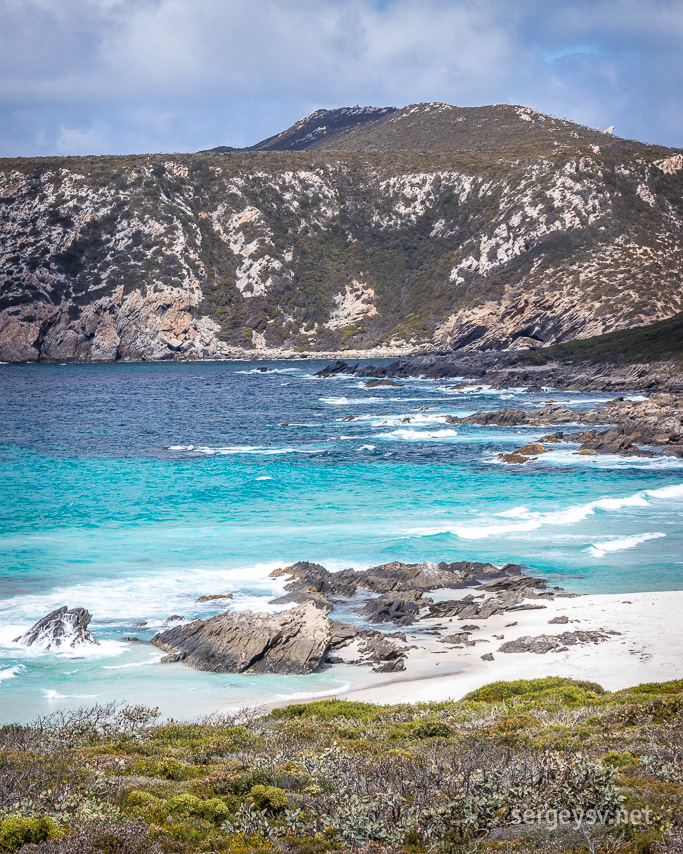 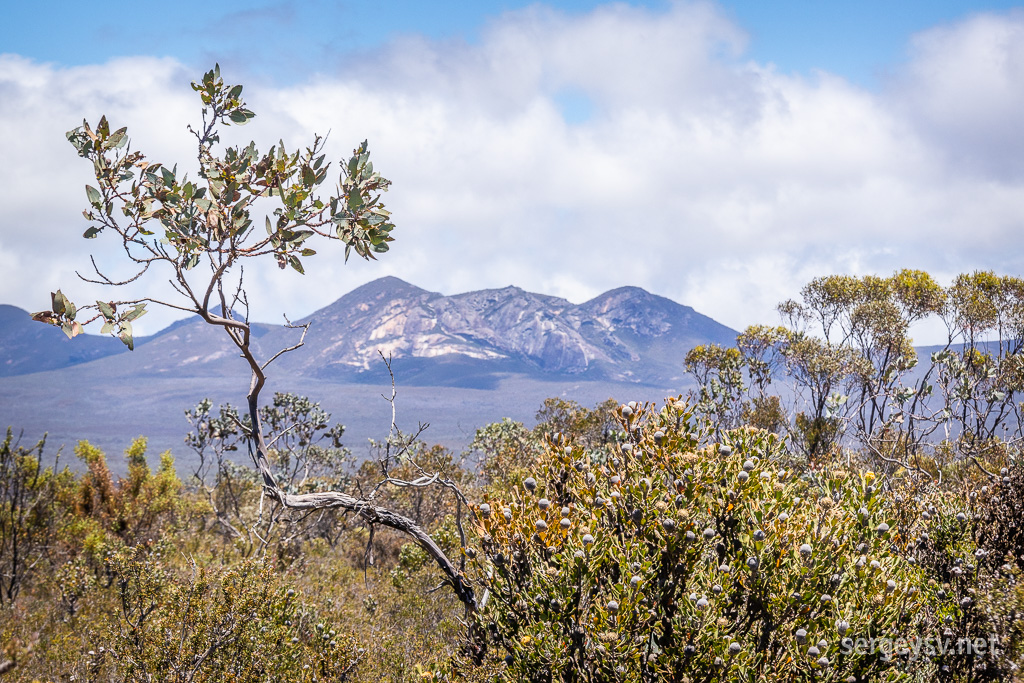 Pretty views on my way out.

Still plenty of time to spare, so I decide to retrace my steps from two years ago and visit the Stirling Range as well. As soon as I head deeper inland, the temperature rises, of course. The Range looks just as striking and prominent as it did back then, and I try my luck with various roadside shots. However, the sun is scorching, and the light is very harsh, so all the resulting photography is only so-so. I consider stopping at a local camping ground in the park, but it looks very tiny, and it's already packed with other travellers. Should probably move a bit further south, perhaps. 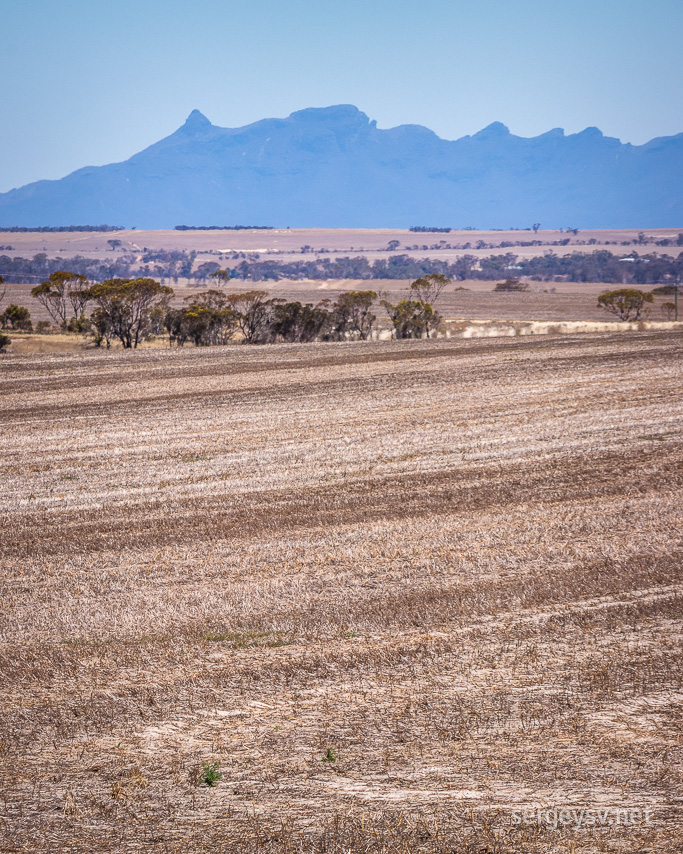 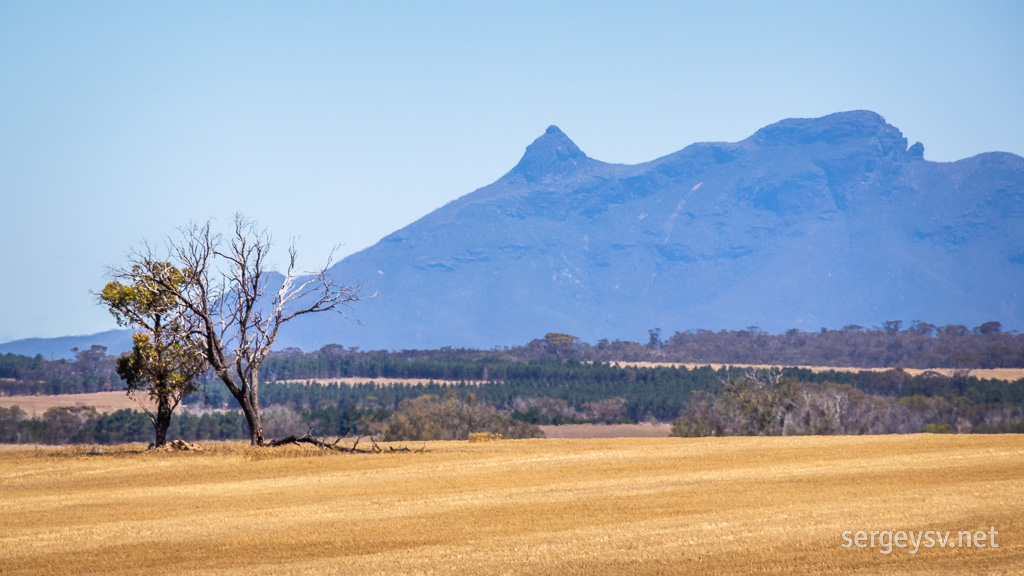 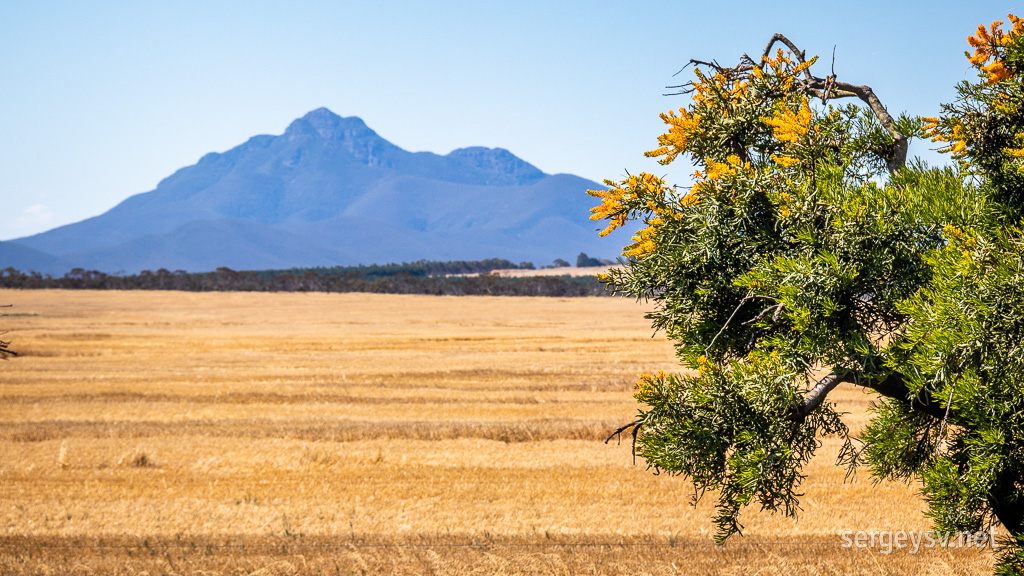 A look from the other side (with those interesting yellow-flowered trees that are numerous out here).

On my way to Bettys Beach, I make another “pic stop” near a huge saltpan, with dead trees sticking out of it and the Range looming in the distance. However, the place is surrounded by thicket which is literally covered in cobwebs, with hundreds of spiders hanging all over the place. Certainly the biggest gathering of spiders I've ever seen! Must be a fair bit of insects and flies around, to feed all this crowd. However, I don't want to feed it with my own self, so I quickly retreat. 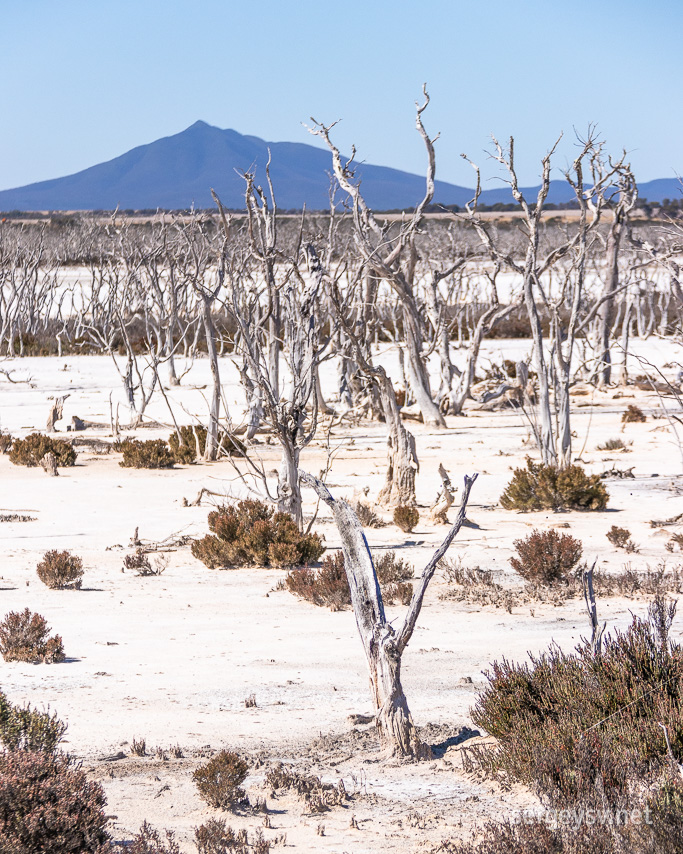 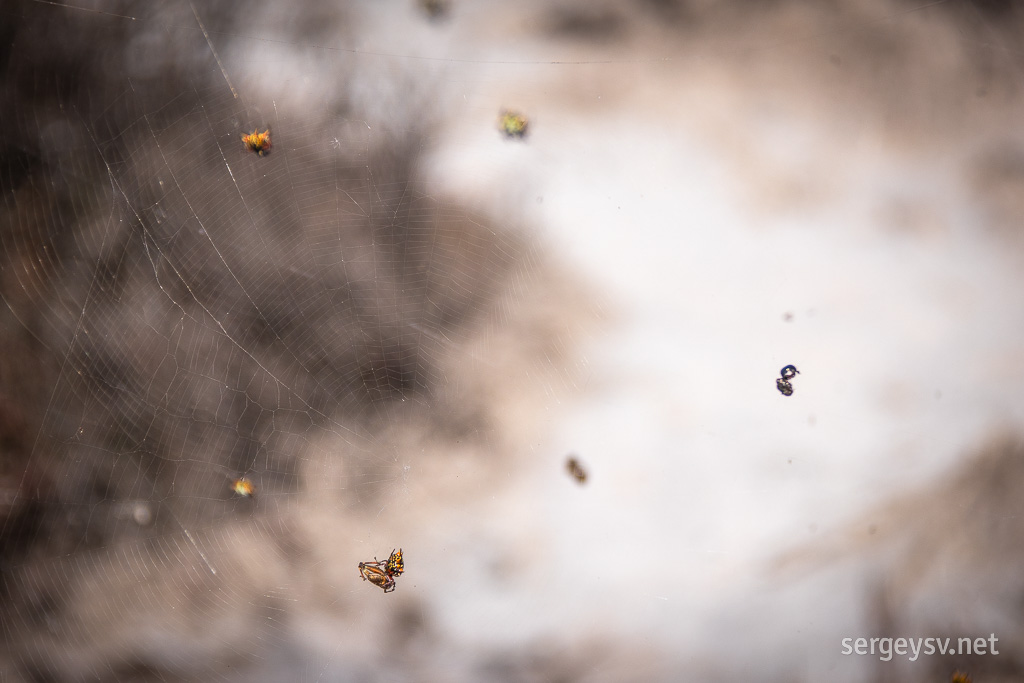 And now I'm back at the seaside! The campground at Bettys Beach is full, of course (it's public holiday, after all), so I decide to drive around and look for a secluded spot of my own instead. There's a few 4WD tracks around, and I take one of them, climbing uphill and rolling downhill while marvelling at the surrounding sea views. However, on my way back up I run into a problem, which is very simple: I can't get back up! 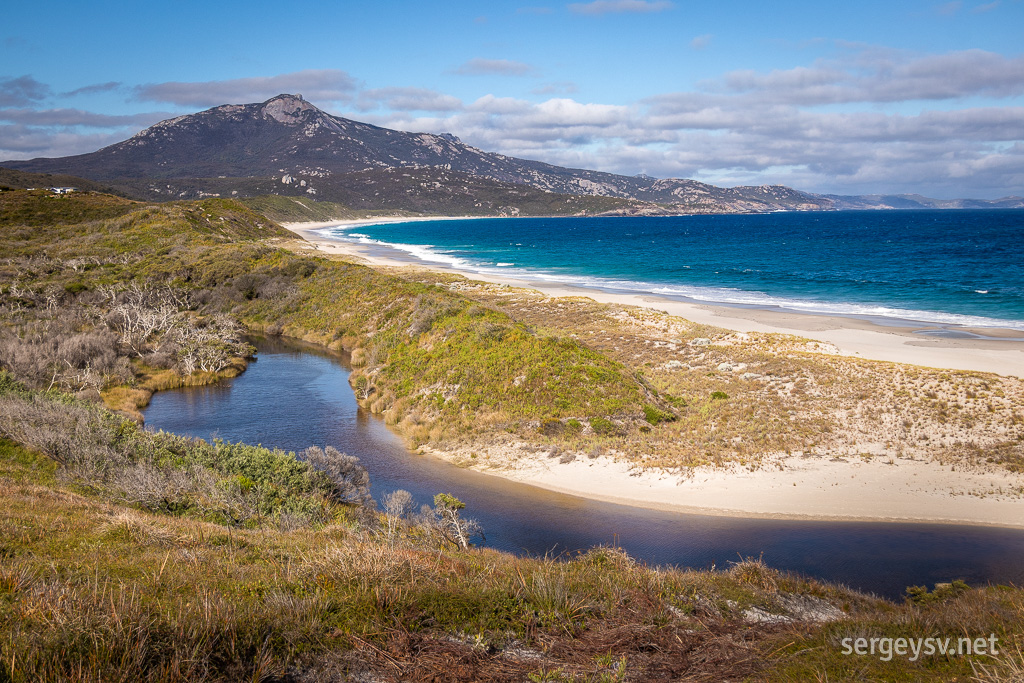 Back at the seaside. 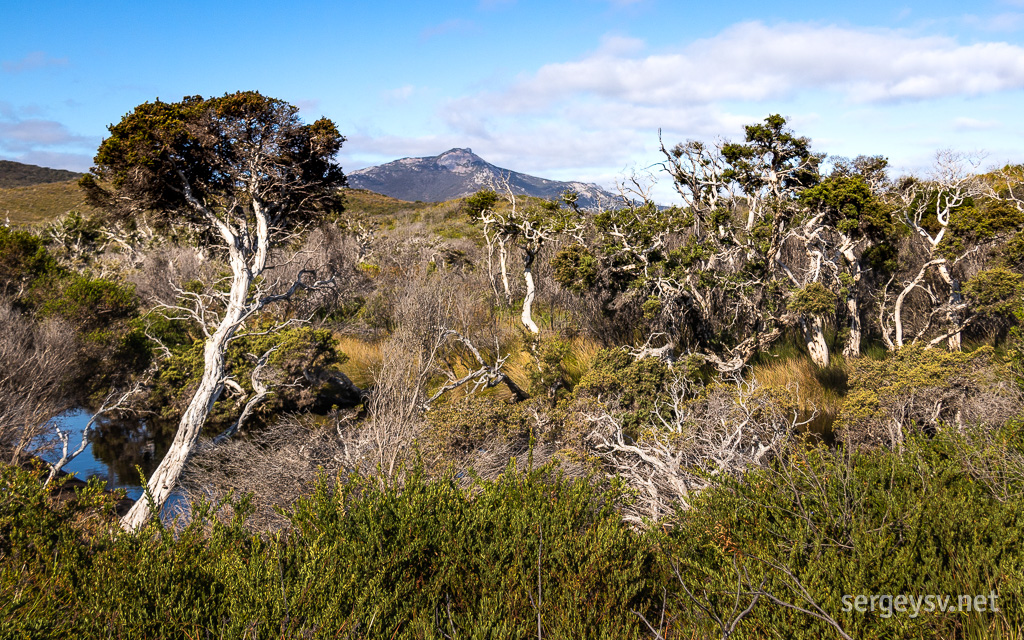 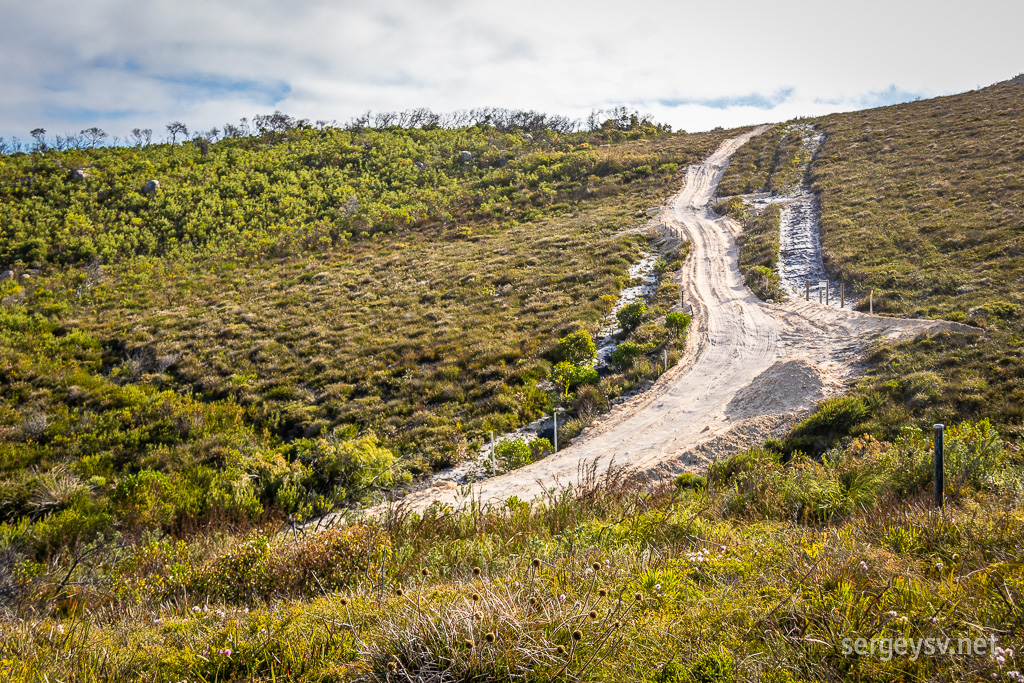 The way back up. 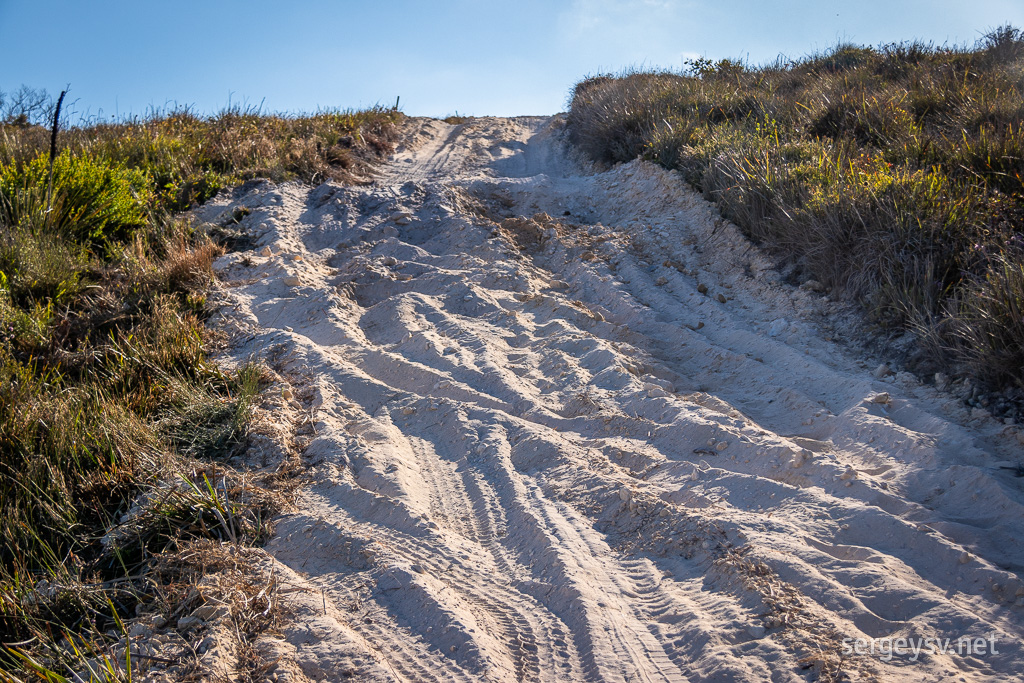 The road is obviously unsealed, and it's yellow sand mixed with gravel, and it's a pretty steep climb, too. At one spot, there's a particularly nasty configuration of bumps and loose sand, which wasn't an issue on my way down, but my car simply doesn't have anything to grip on to climb. Now that's unfortunate. After three or four failed attempts, I pause to think; then use my shovel to try and level the problematic spot by hand, slicing off the bumps and filling the holes. And hey presto! After that, the Prado's wheels finally get some traction, and I'm free, which makes me feel both silly and proud at the same time.

However, the day is ending quickly, so I retrace my steps to a nice little place I spotted earlier and camp there. Enough 4WD adventures for the day! Let's see if I can catch a pretty sunrise tomorrow morning instead. 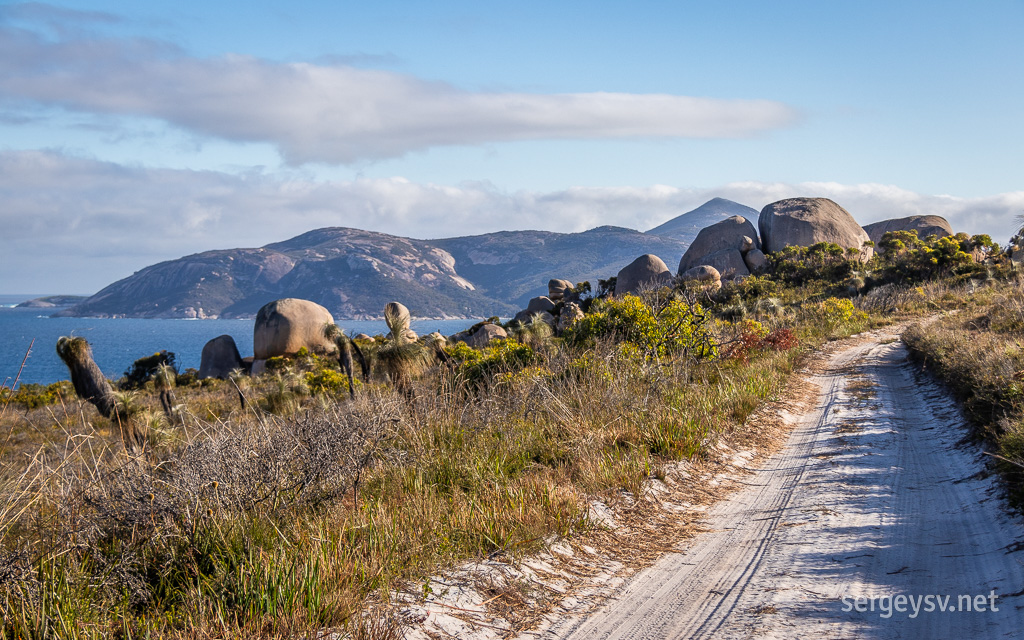 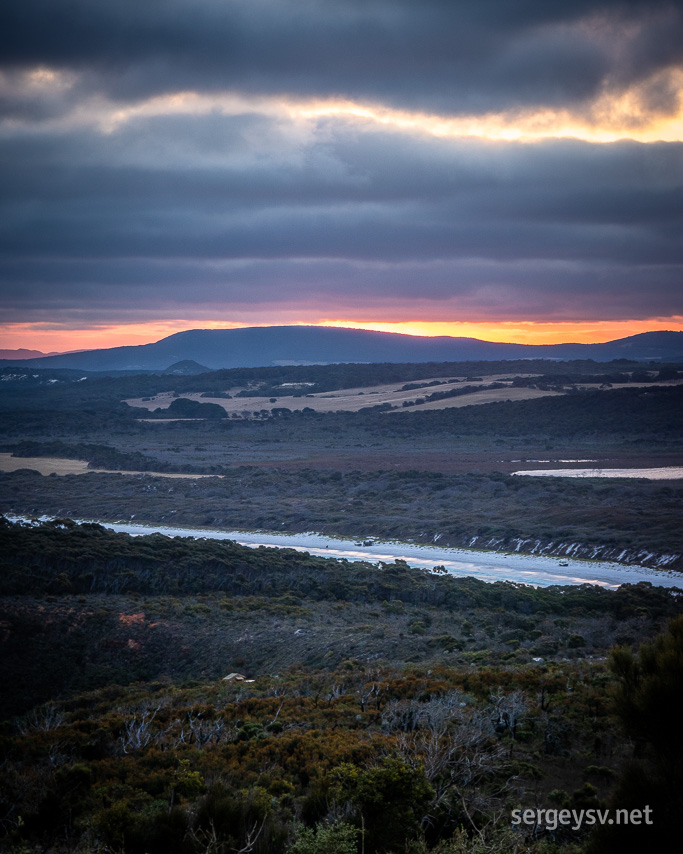 The day is done.