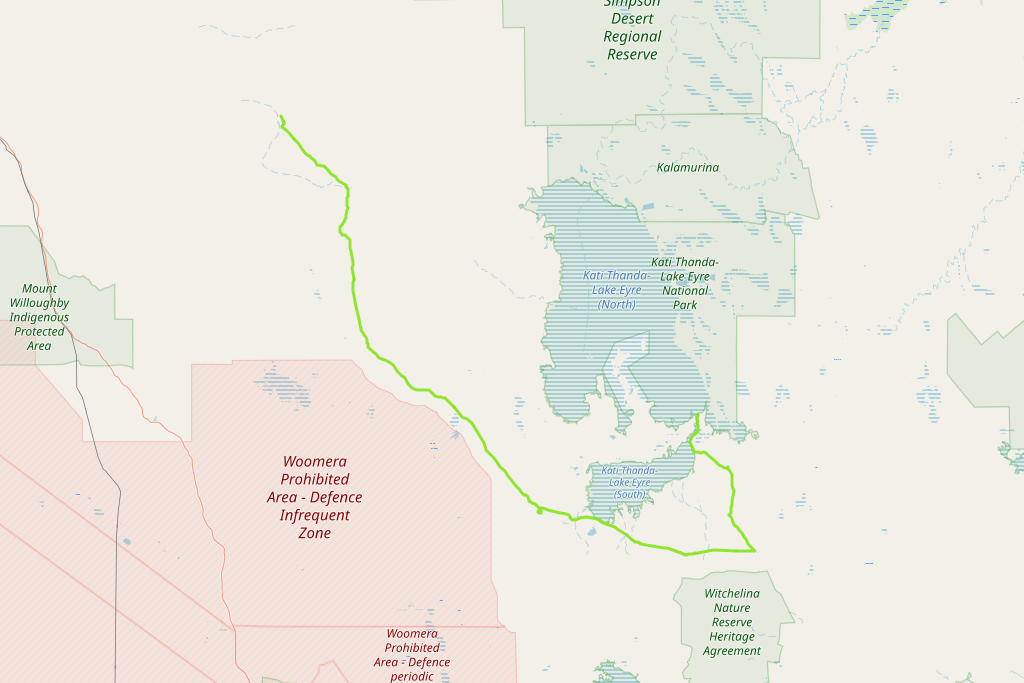 The morning on the Lake Eyre is just as quiet and beautiful as the evening before. And now that I have all this beauty entirely to myself, I should start taking pictures of it now, shouldn't I? 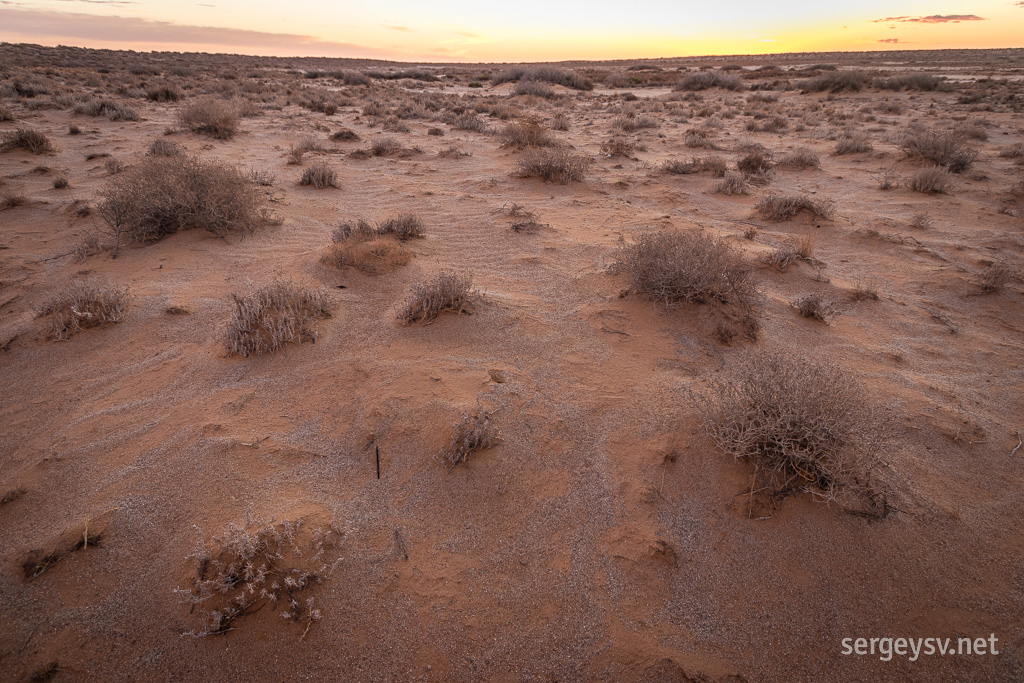 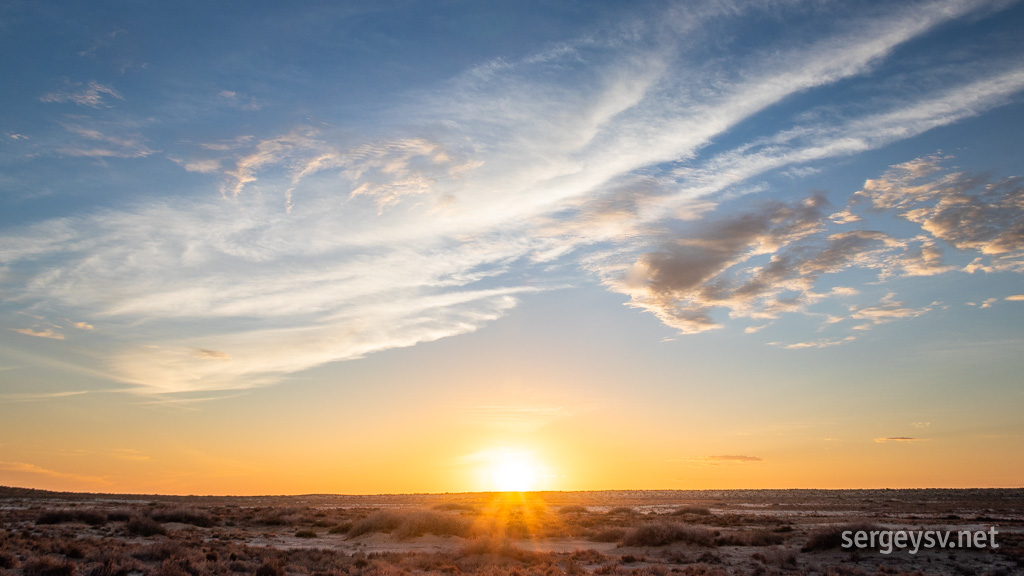 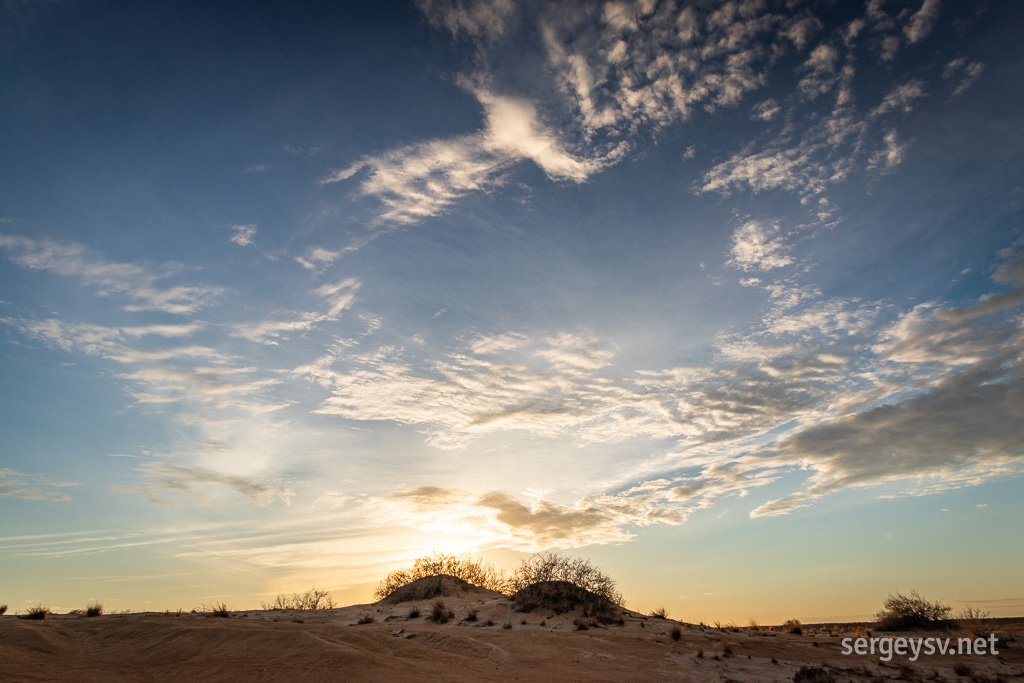 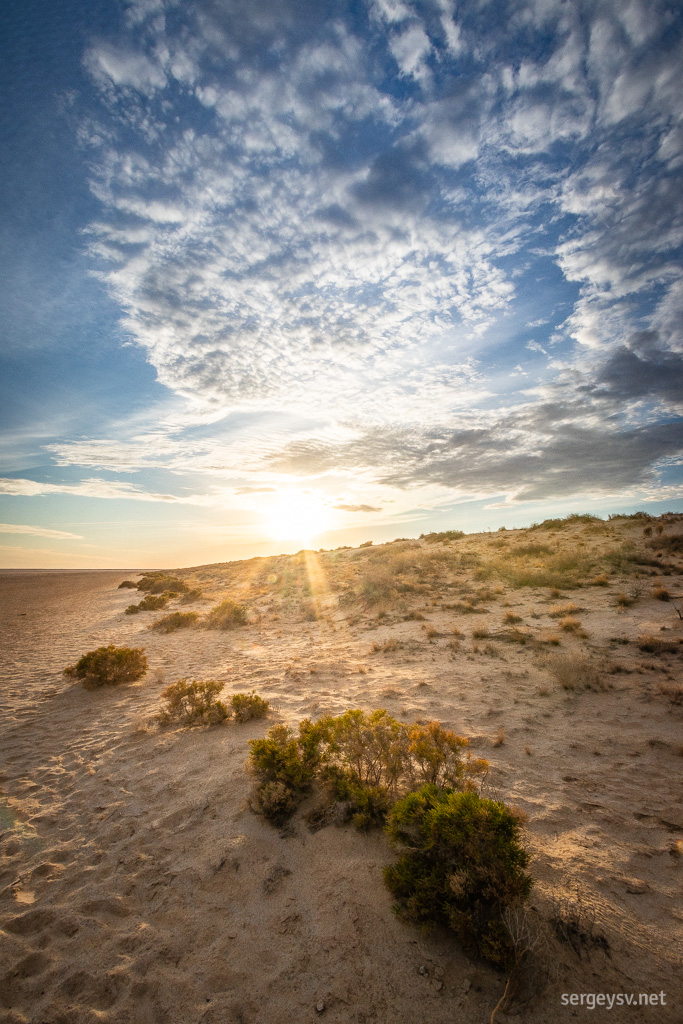 The morning on the waterless lake. 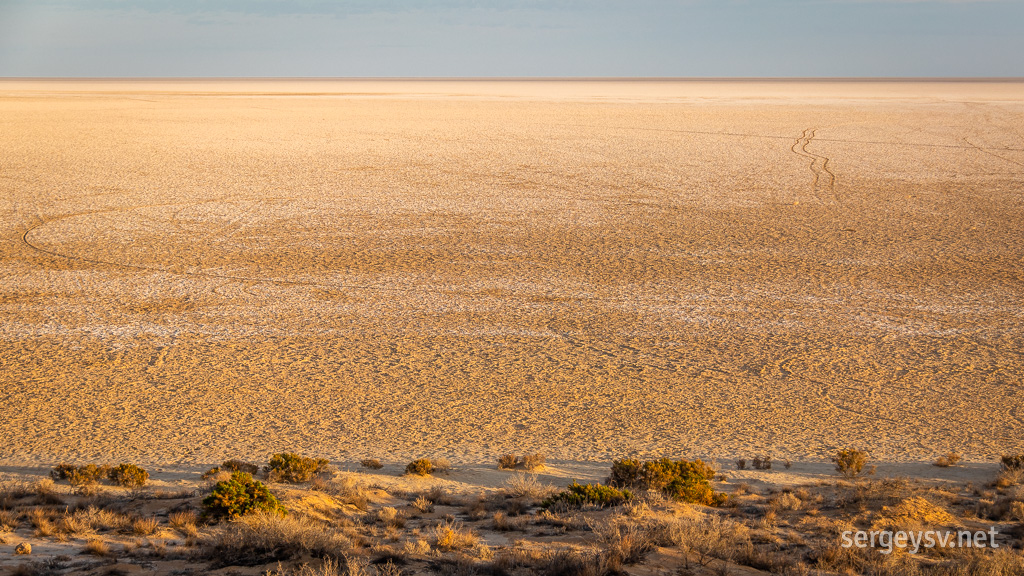 A bit difficult to convey just how vast and flat this place is. 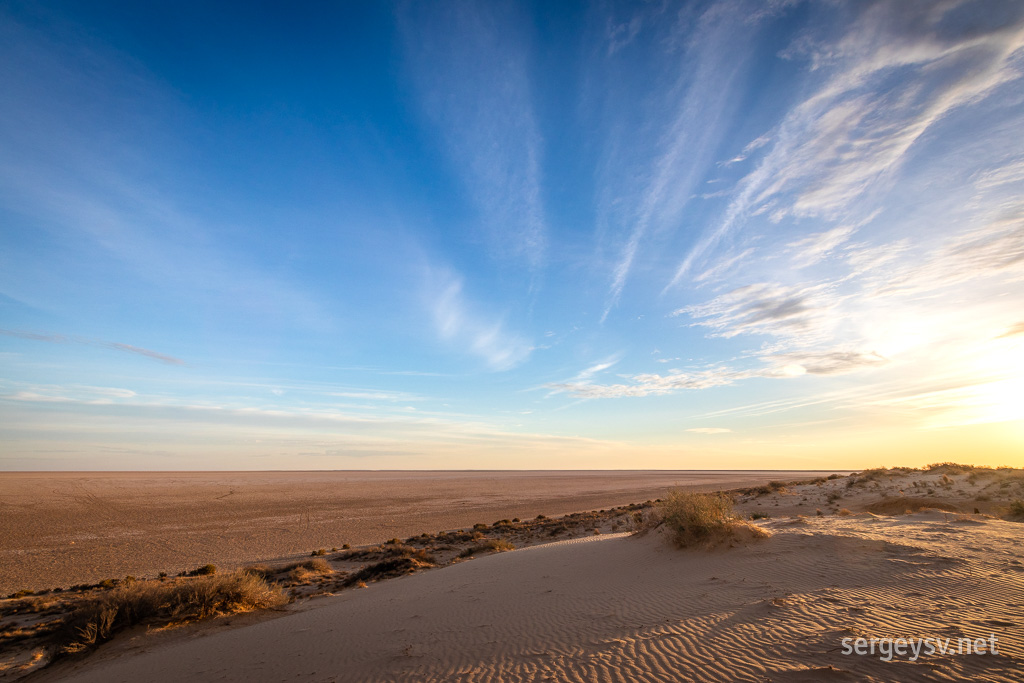 So quiet and beautiful.

After that – a quick breakfast, and I leave this no-camping, no-signal, no-people place, taking another shaky and bumpy drive back to Muloorina. And by the way: Anna Creek Station, that as-big-as-Israel one, is not too far away from here!

Muloorina has its own camping grounds, as many stations do these days; and if you don’t feel like throwing some money into the honesty box (shame on you!), it’s entirely free of charge. Just out of curiosity I take a look at the grounds, and they look very spacious and cosy under the shade of the large gums. Trees mean the presence of water, which is normally in a very short supply around here; and indeed the place has its own waterhole, which, however, doesn’t look very suitable for swimming. Not that I was going to, anyway.

On my way back to the main road I see a lot of cows, who look very well-fed compared to many of their brethren I’ve seen in other parts of Australia. As for the other members of the animal kindom, I spot a few big grey kangaroos in the shade of a small tree, and quite a large number of emus, walking in small groups here and there. 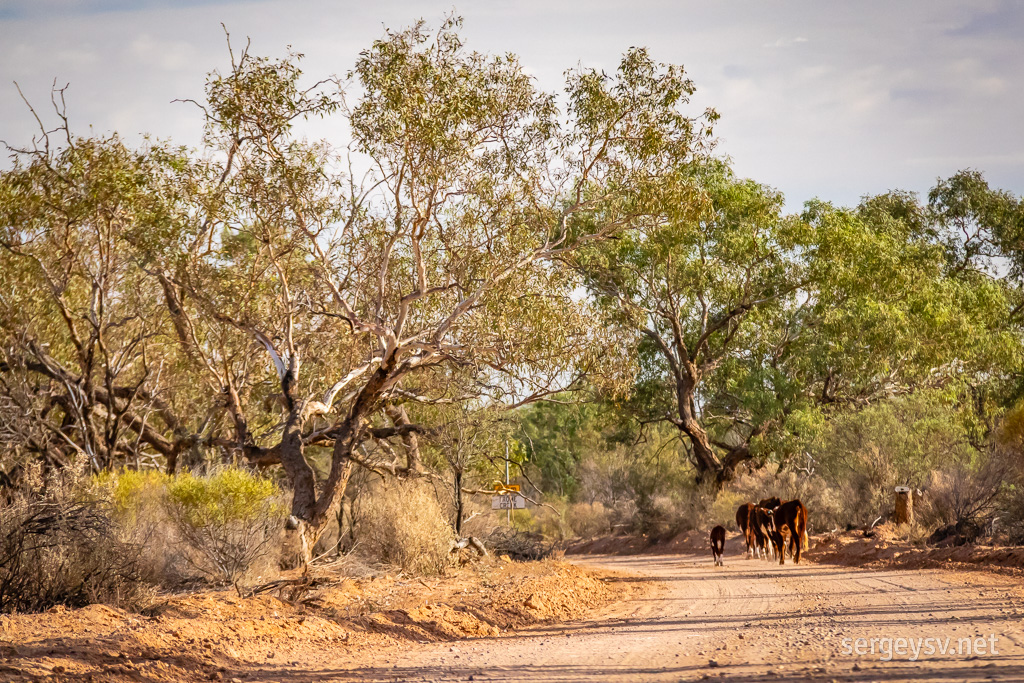 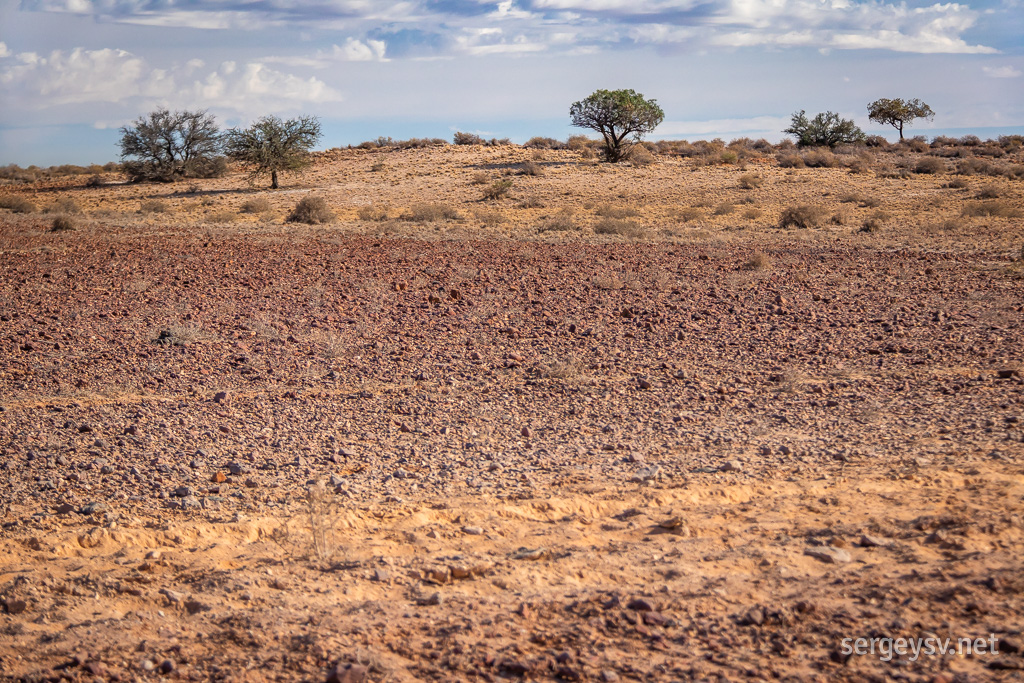 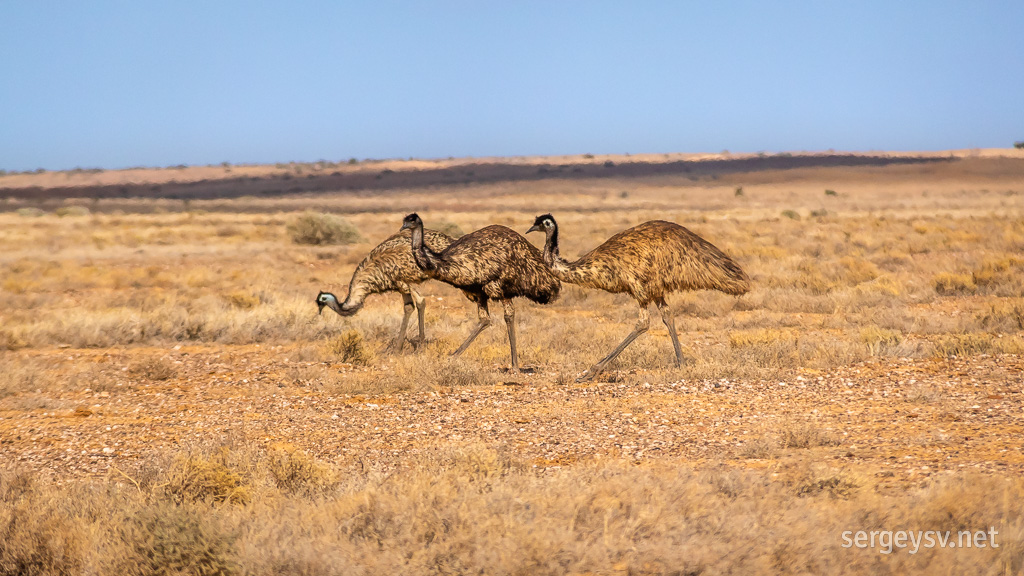 Finally, at almost 10 a.m., I’m on the Oodnadatta Track. This wide, unsealed road about 600 kilometres long has a fair bit of history, mostly associated with the railroad that used to go through these parts. In 1980s it was relocated further westward, where it's less likely to be damaged by rain; however, its many artefacts are still seen along the entire length of the road, attracting numerous history buffs. Which I am not, though. 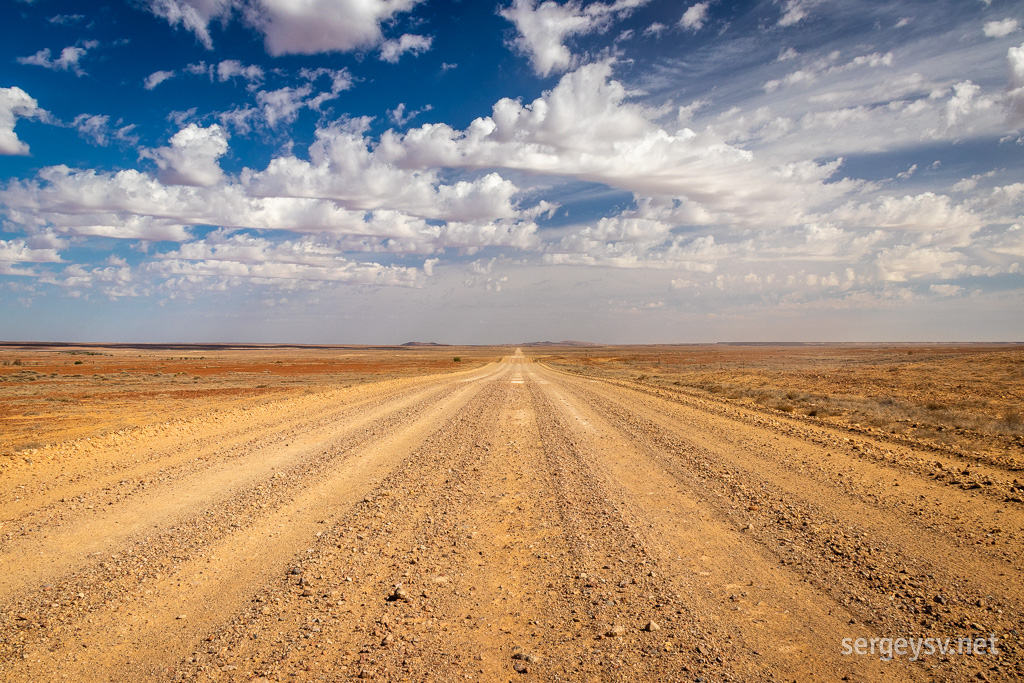 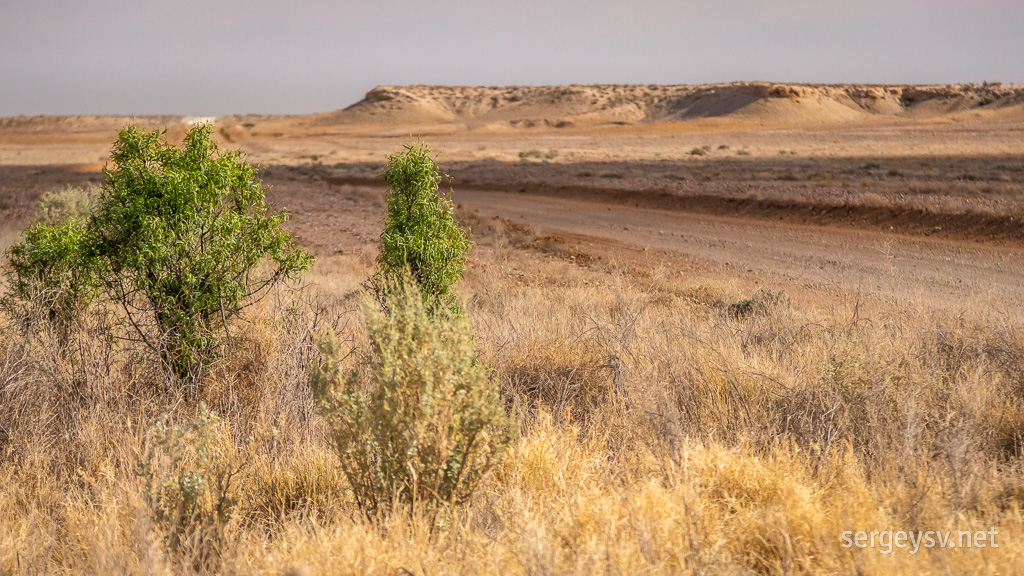 The surrounding landscape is quite pretty. In its own way. 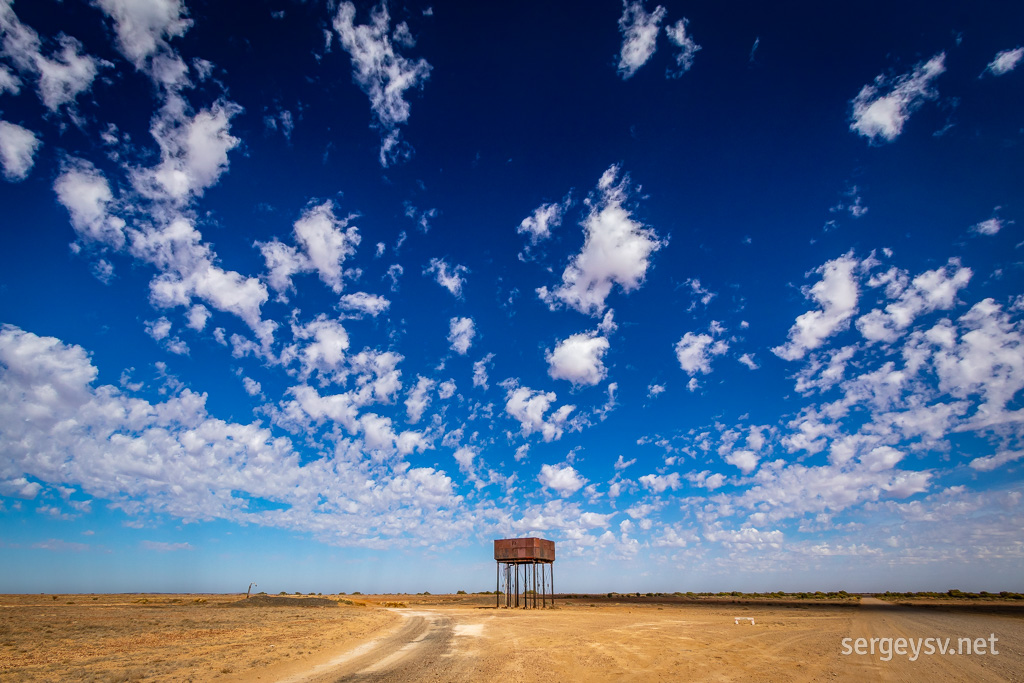 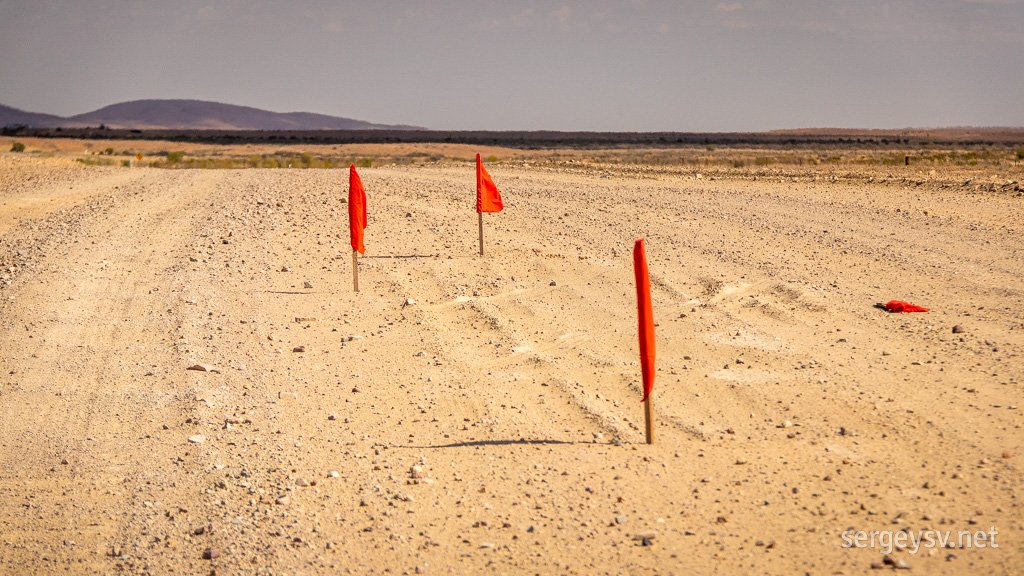 The road is in excellent condition for the most part, and 80-90 km/h is a perfectly acceptable speed. I could be going even faster, but I’m not in a hurry. Every now and then I stop at the roadside to take a picture or two. Soon I arrive at a large area littered with bizarre makeshift sculptures, which are largely ignored by the (very infrequent) vehicles passing by. To be honest, I largely ignore them myself: I’m not here for the creations of man, I’m here for the creations of nature. 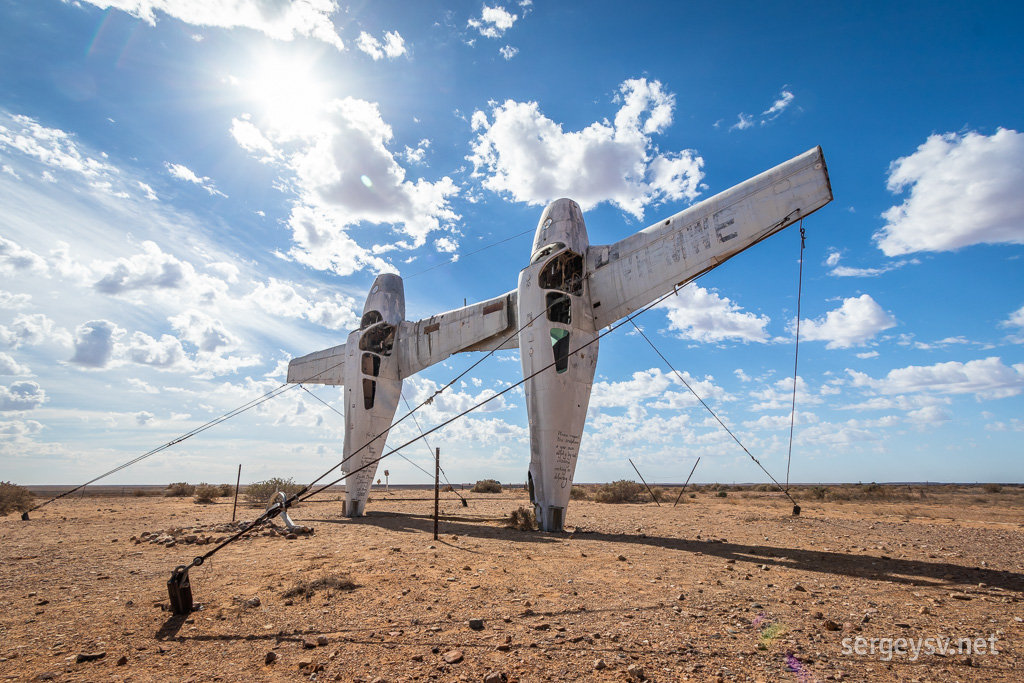 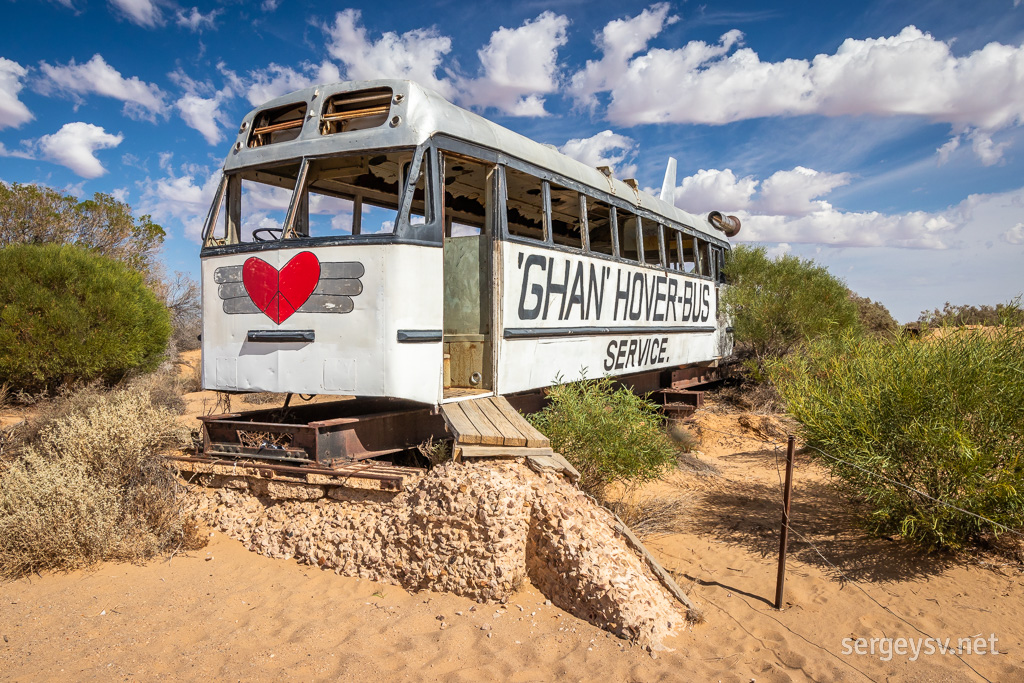 Who needs hoverboards when you have hoverbuses?

Further down the road, I stop at a lookout to have another glance at the majestic Lake Eyre. This place is a lot more accessible, and of course it has a lot more tyre tracks heading right onto the lake. People are hopeless, eh?

Lake Eyre from another lookout.

At noon I reach the famous Bubbler. An artesian spring forms a big puddle some five metres across, and its surface is perfectly still—until all kinds of bubbles begin to pop up every few minutes, and in the centre of the puddle a big chunk of mud begins to roll and move around, as if something bigger is about to burst out, but never does. Not at this day and age, anyway: as the information board tells me, the outbursts of The Bubbler used to be more violent in the past. 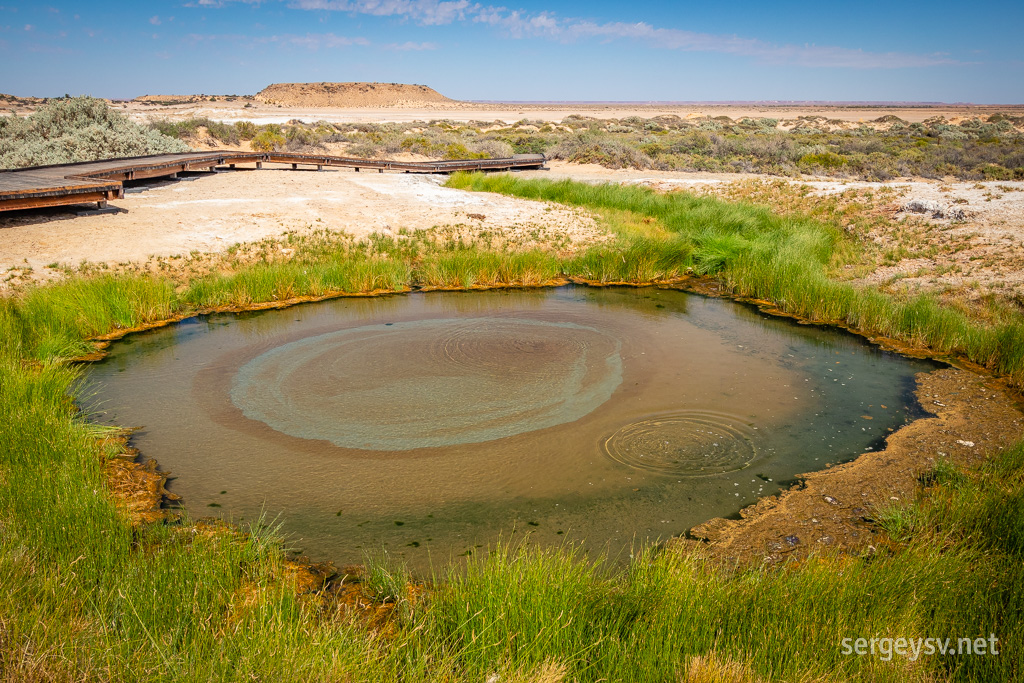 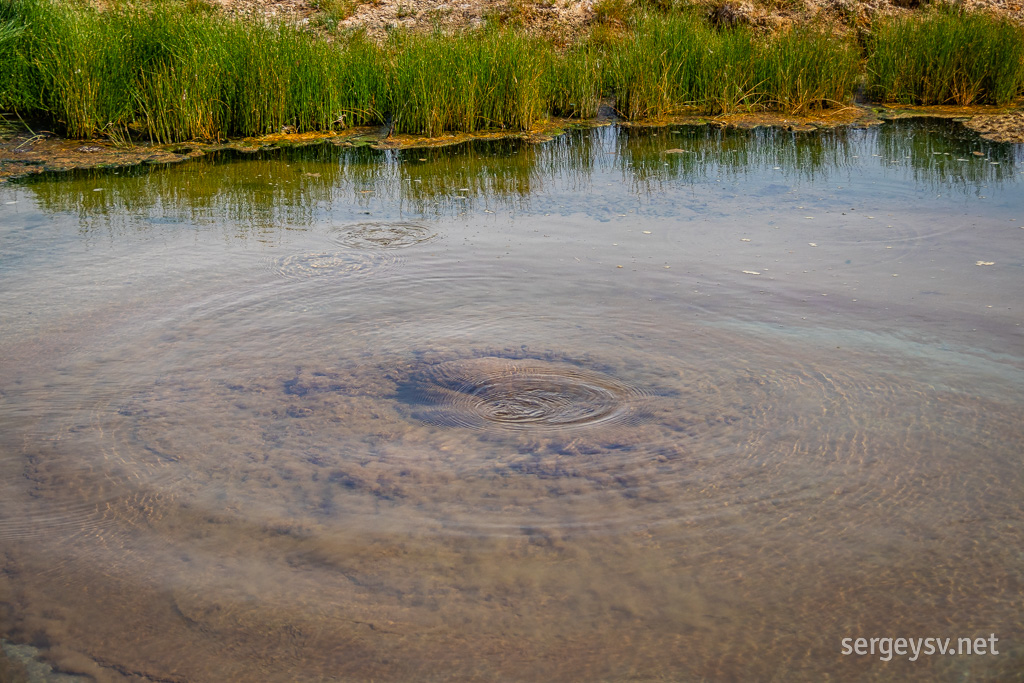 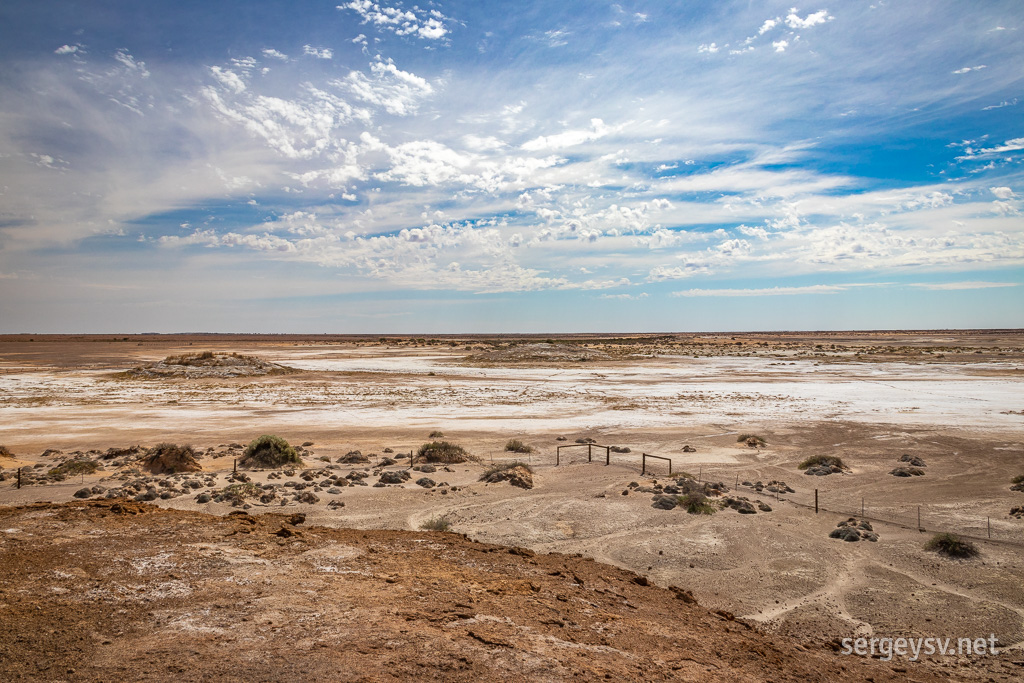 The surrounding scenery is a swirl of white, ochre, and beige.

Next to The Bubbler is a similarly looking Blanche Cup: another artesian spring. Both are encircled by lavishly green grass, which is a start contrast to the bleak, pale desert around. Oddly enough, this spring is located on top of the large mound about 5-7 metres high; was it made by silt and sediment that came out of the spring? Maybe. There’s more than a few similar-looking mounds along the road that I spotted earlier. Perhaps they also host, or used to host, artesian springs like this one. 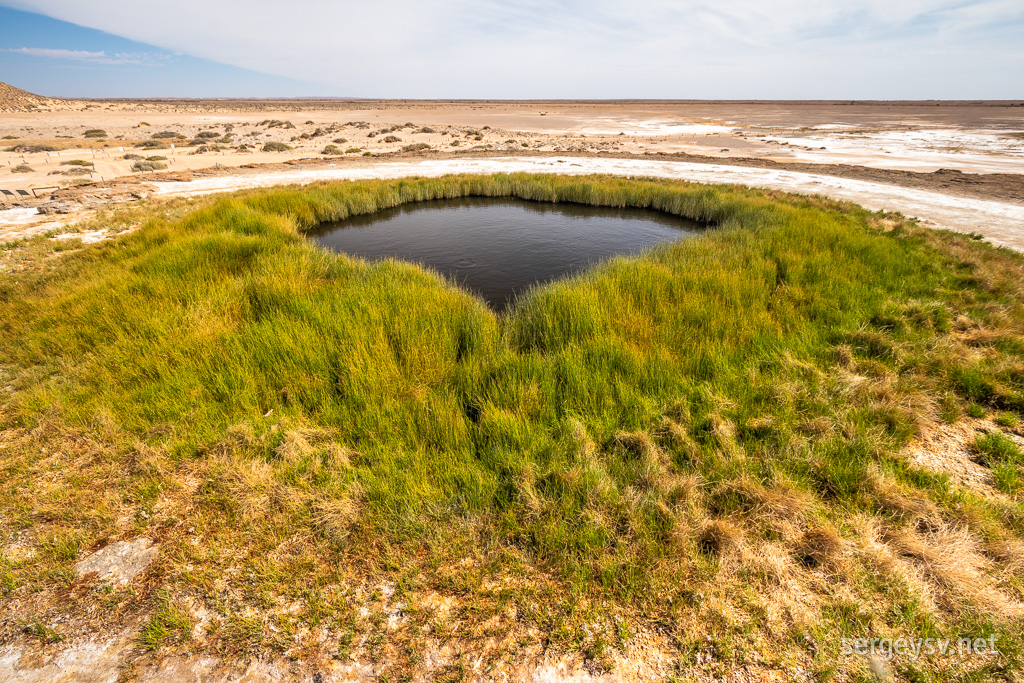 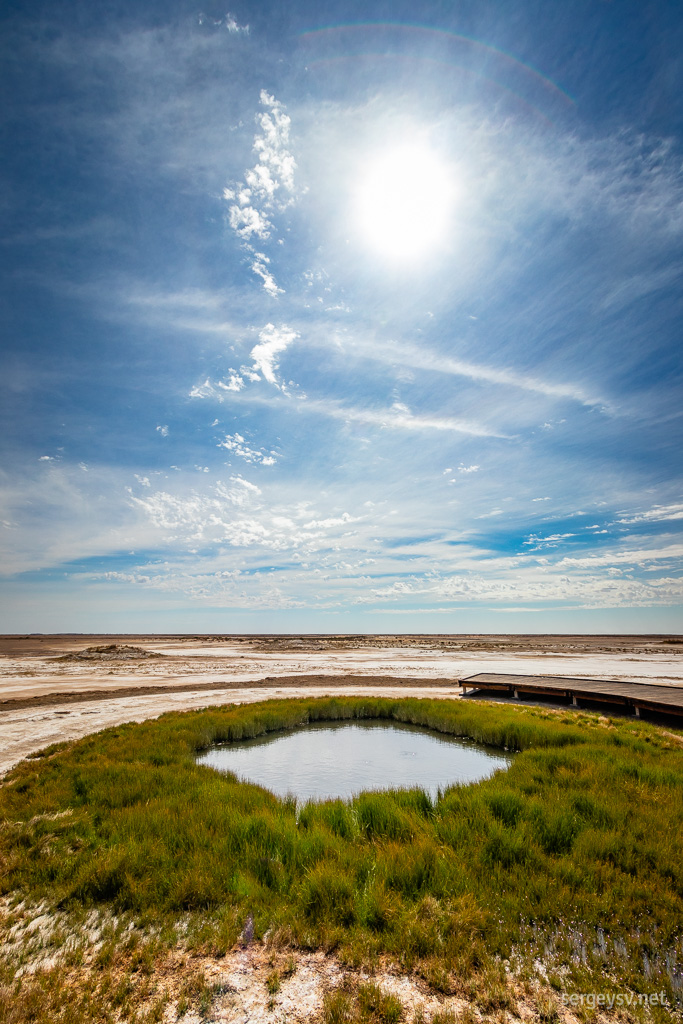 Under the scorching sun.

Not too far from that area there’s a place called Coward Springs, which appears to be extremely popular with tourists. About 20 cars, and about twice as many people walking around and being their usual noisy self. After a day of solitude, it looks like a proper crowd! The campgrounds look very well-tended, and so they should be for the money they charge (again, collected via the honesty box). I don’t plan to camp here, though, and neither do I care for a swim in the bubbly natural spa, no matter how lovely it looks. I haven’t had a shower since the day before yesterday, and I could really use one, but the next township is not too far ahead.

It’s called William Creek, and I reach it around 2 o’clock, and for $6 I get one of the worst showers I have ever had on my journeys. The booth is tiny (has a curtain though), the water takes forever to get hot, and the shower head itself is so caked with the mineral crust that water barely comes through. Should have probably treated myself with that spa, after all. And they don’t have ice cream here either. Sad!

The road continues to be good, and quite picturesque too. The day is somewhat cloudy, which only helps me to make some very decent photos on my way. I have already learned that sometimes you take your best pictures when you just stop your car and step away from the roadside for a minute or two. This proves to be very true this time around as well. 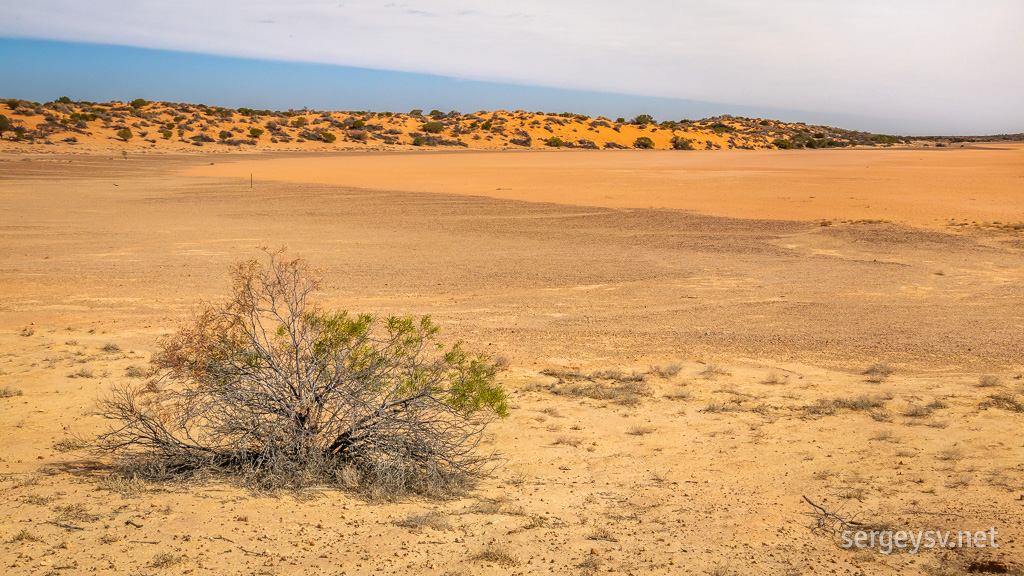 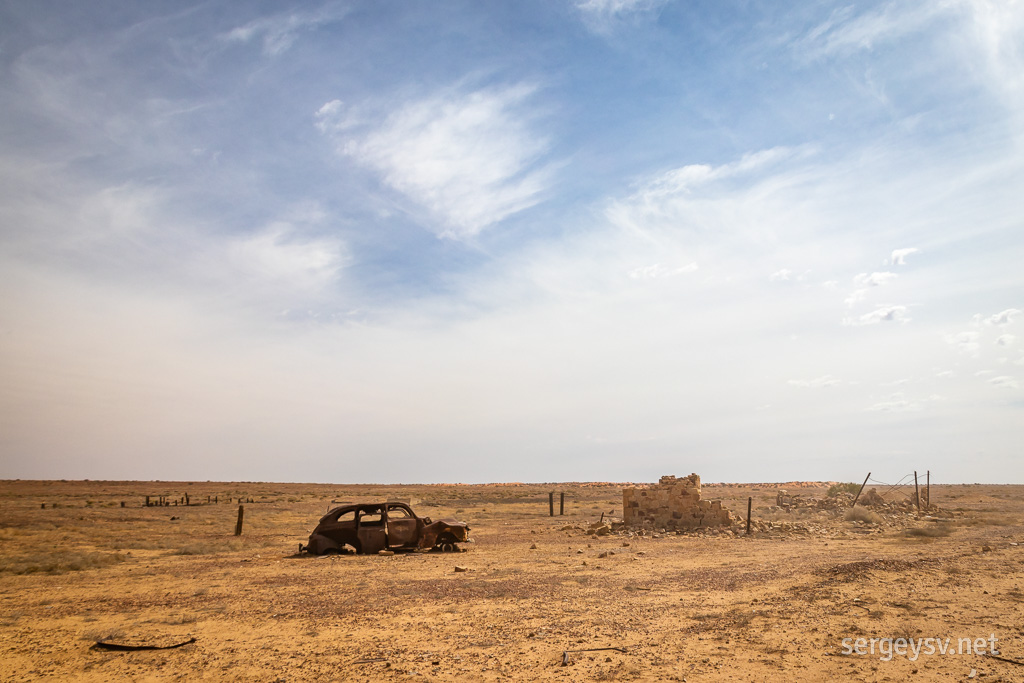 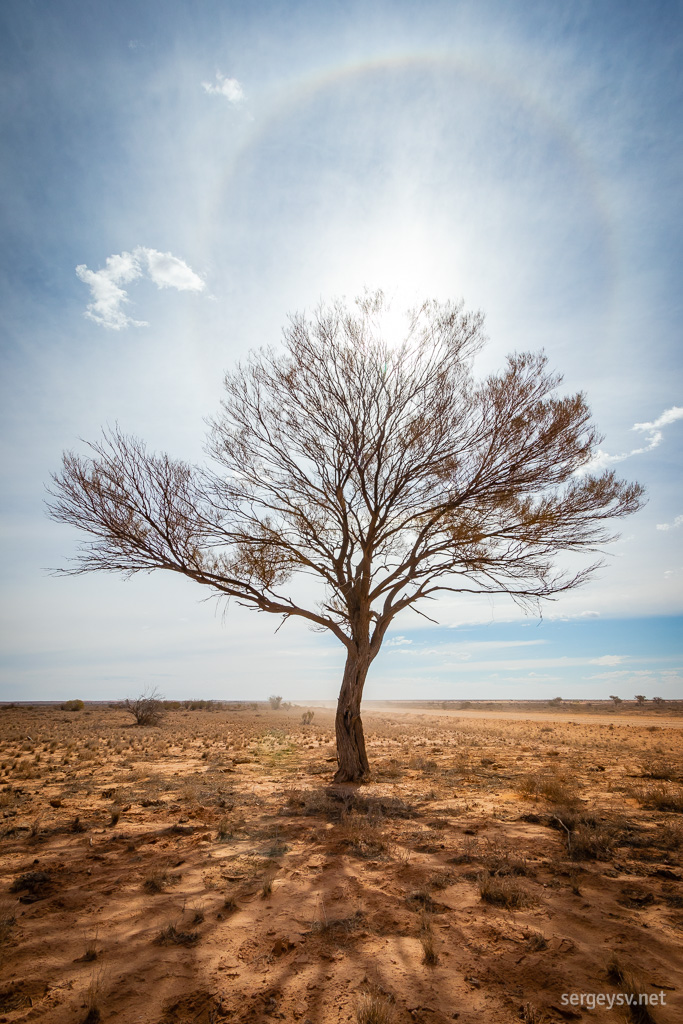 Crowned by the sun. 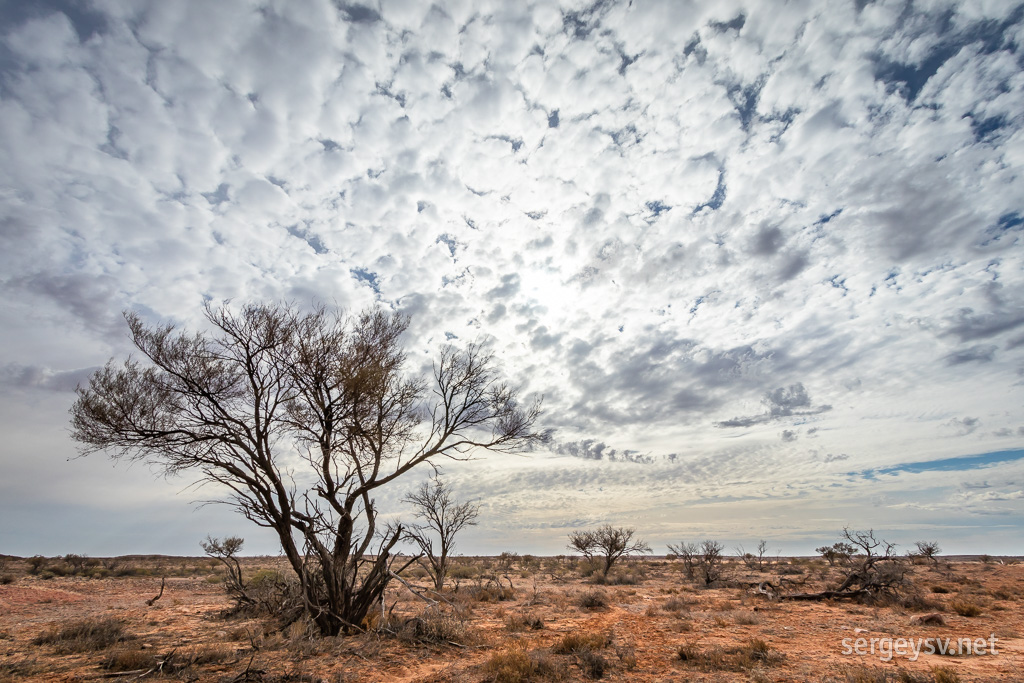 Tough life of a desert tree. 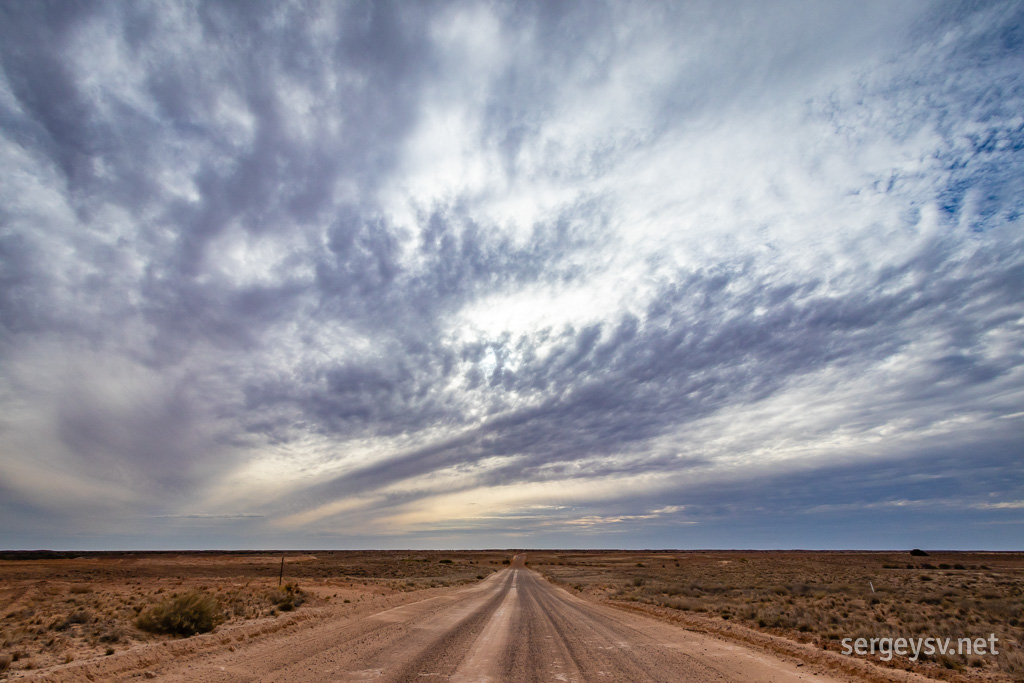 The sky puts on a show just for me. 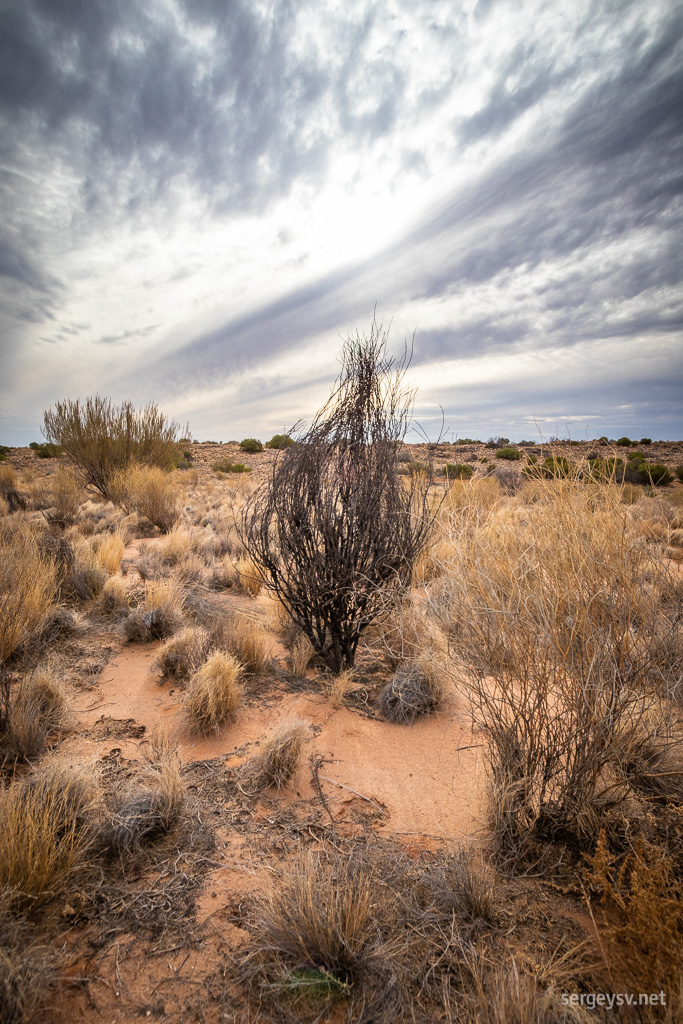 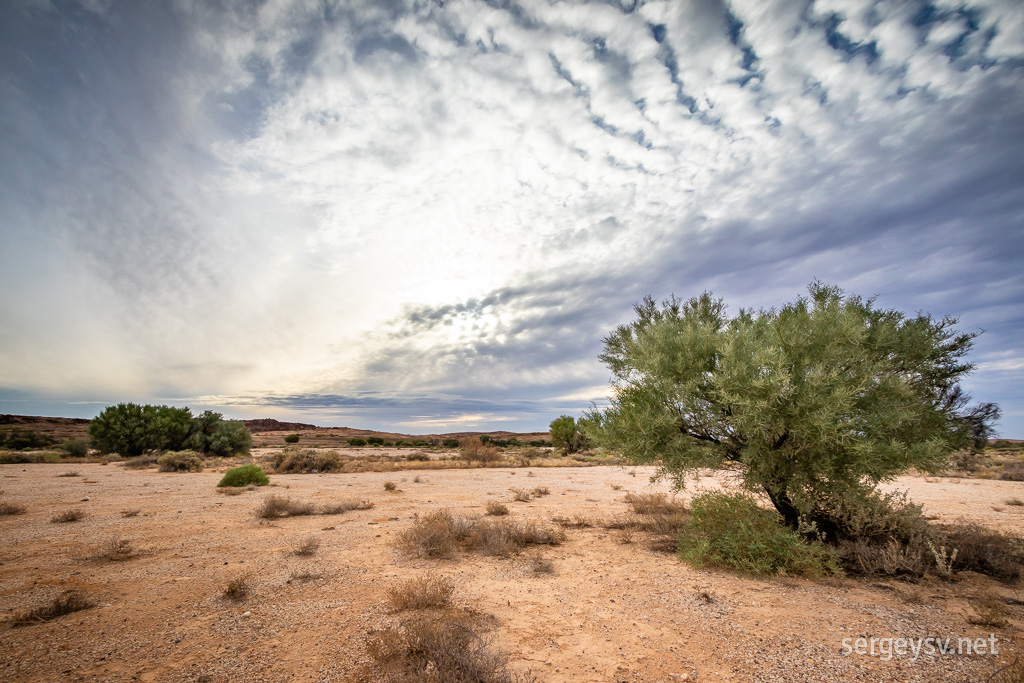 I'm in love with these clouds. And this landscape.

At half past five I arrive to Oodnadatta: a tiny outback town that lended its name to the road I'm travelling on. The place looks dusty and depressed; but there’s a free camping ground just outside of town, which is where I stop to spend the night. The spot is not too big, and it's quite busy, but the campers seem to be quiet and nice, and overall it’s actually not that big a deal. The night is cloudy, though, so no starry sky pictures today.