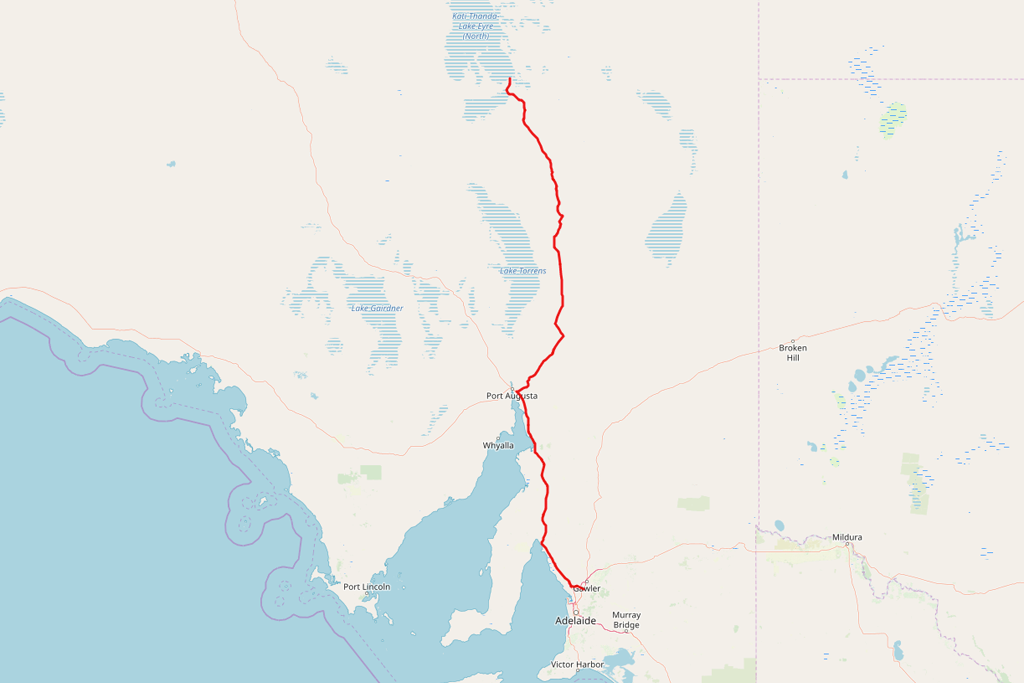 Did you know that Anna Creek Station, the largest of its kind in Australia, is bigger than Israel? Just think about it. An area of land as big as a country, just for your cows. You have probably never even seen a lot of your own property in person. Hell, there are probably places that no one has ever seen so far, except for your cows. And maybe not even them.

That's Australian outback for you.

The sheer vastness of these dry, sun-baked lands has always been mesmerising to me. Luckily, there's a long weekend in April, which is just the perfect time to revisit those parts of the state. Not too hot, not too cold, and plenty of the outback vistas for me and whoever ventures there as well. Time to hit the Oodnadatta Track!

(It's good that I always look back before leaving my carport: this time, the rolling door didn't close for whatever reason, so I had to roll it down manually. Otherwise it would have stayed open for the entire four days of my absence. Always check your locks and doors when you leave, people!) 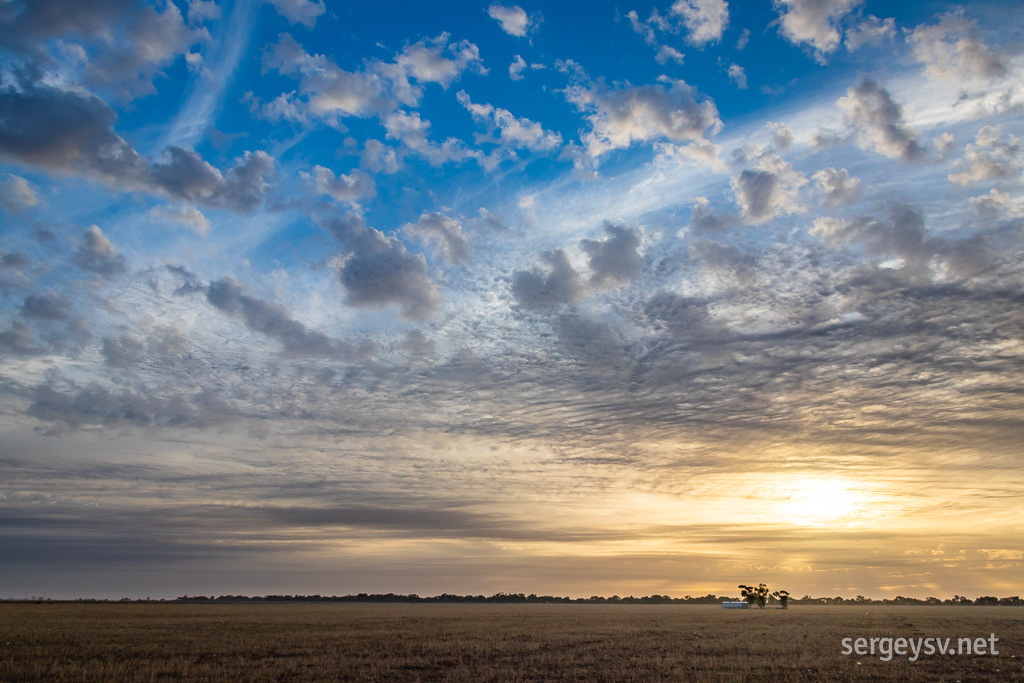 The morning is cloudy, and distant curtains of rain are even seen here and there in the distance, amidst the undulating country that surrounds Adelaide. Perfect opportunity for some wide-angle photography. 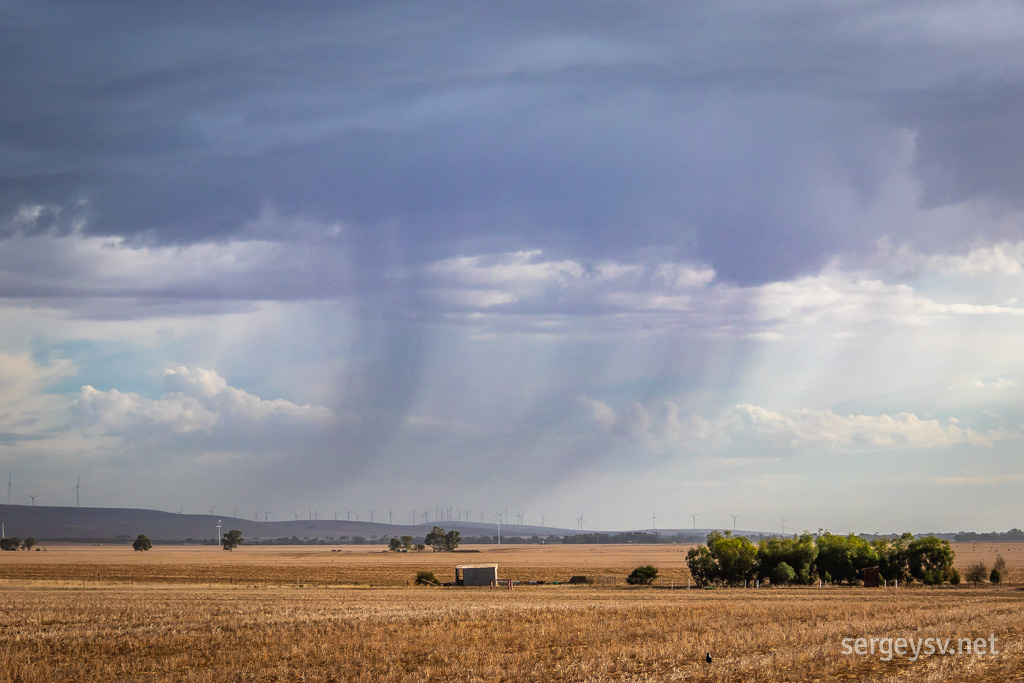 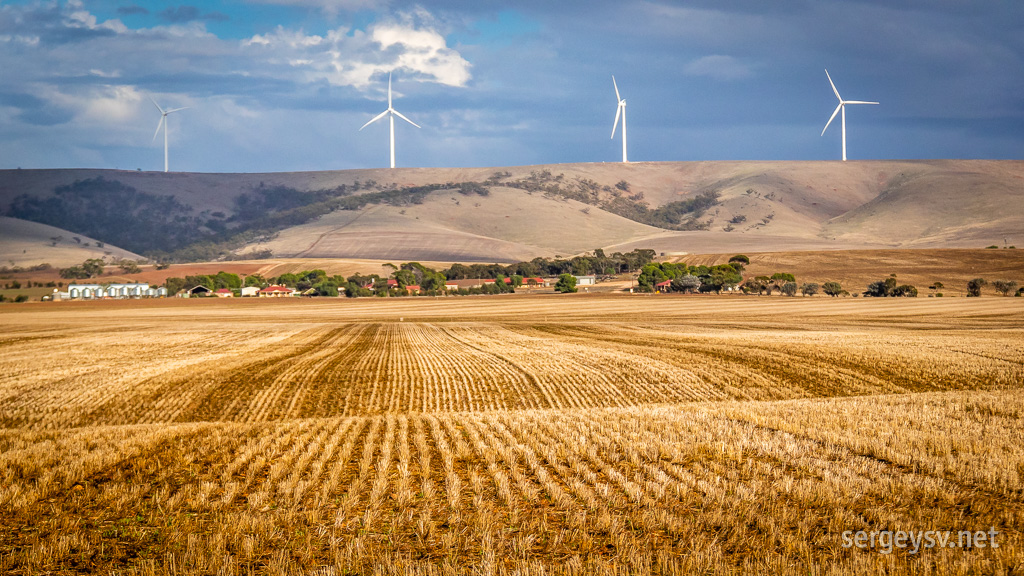 Love the windmills, too. 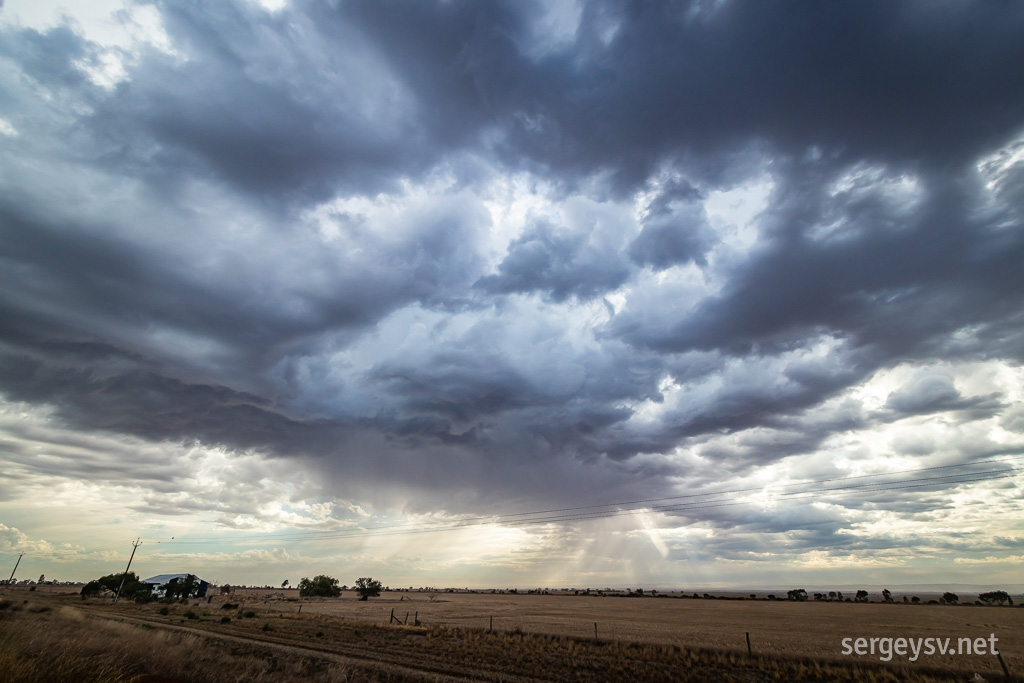 The day clears up slowly as I drive further north. The Gulf begins to loom in the distance: that's the last of the sea water I'm going to see for the rest of the trip. 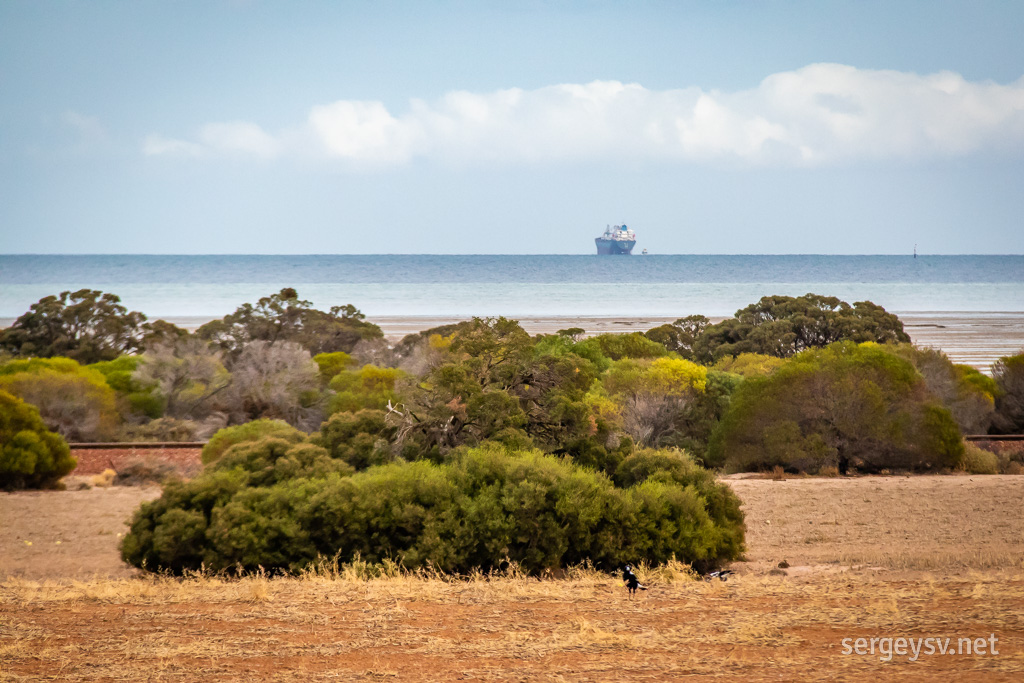 Time to turn towards the Flinders Ranges. And here they are, looming in the distance instead of the sea! Always a delight to see them. Means the outback's getting closer. 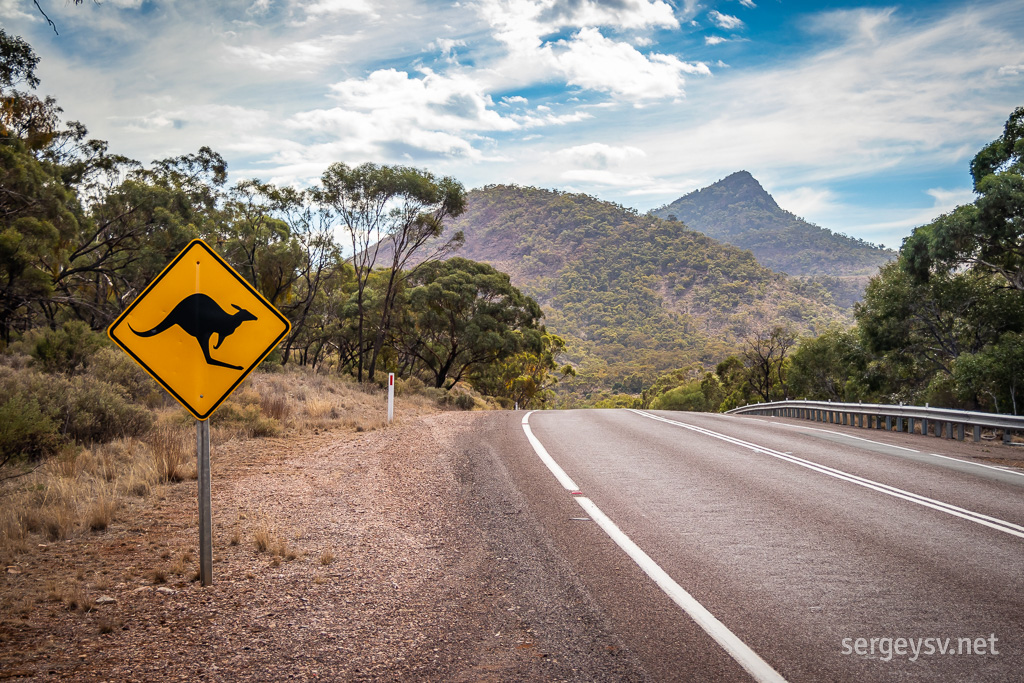 The road is winding on. 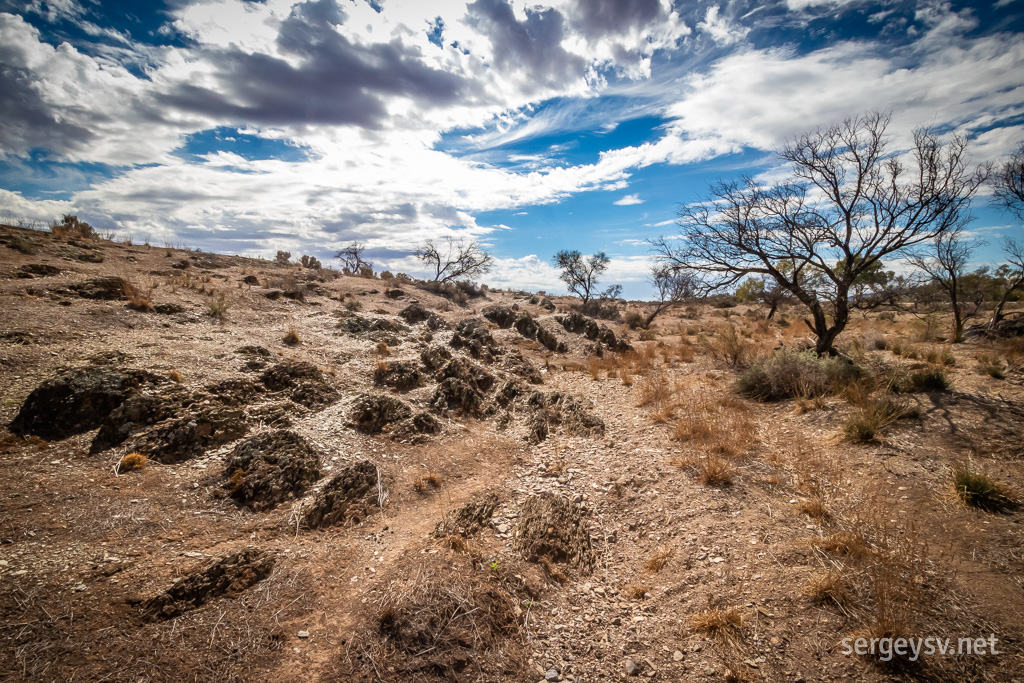 The terrain gets rockier.

The farmer's life is tough in these areas. It gets too arid too fast as you go further north, and farms become replaced by cattle stations very fast, too. 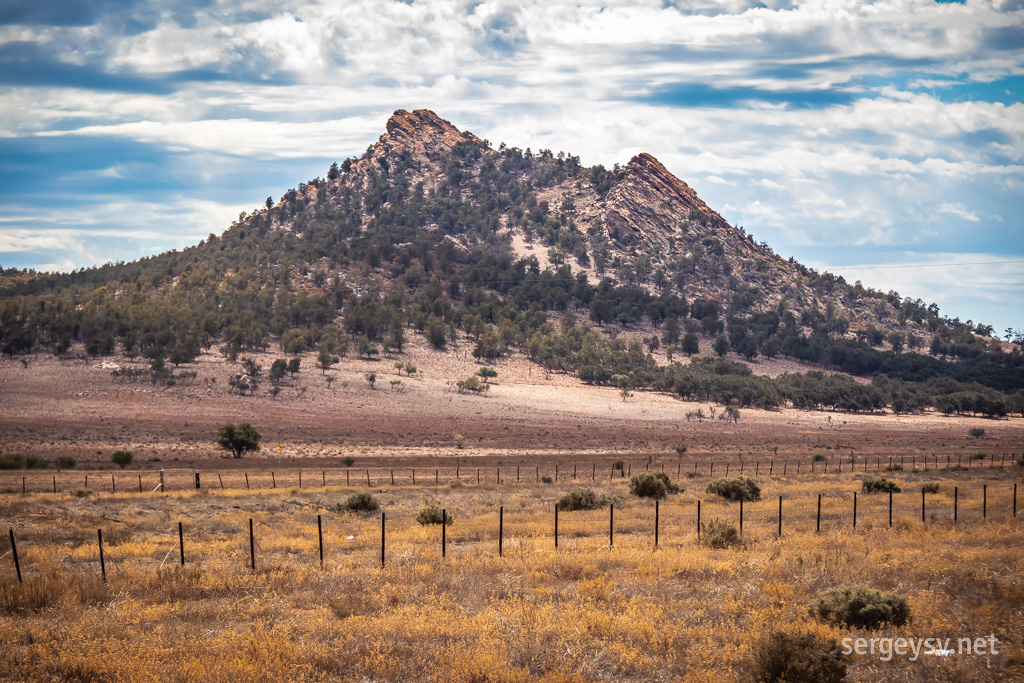 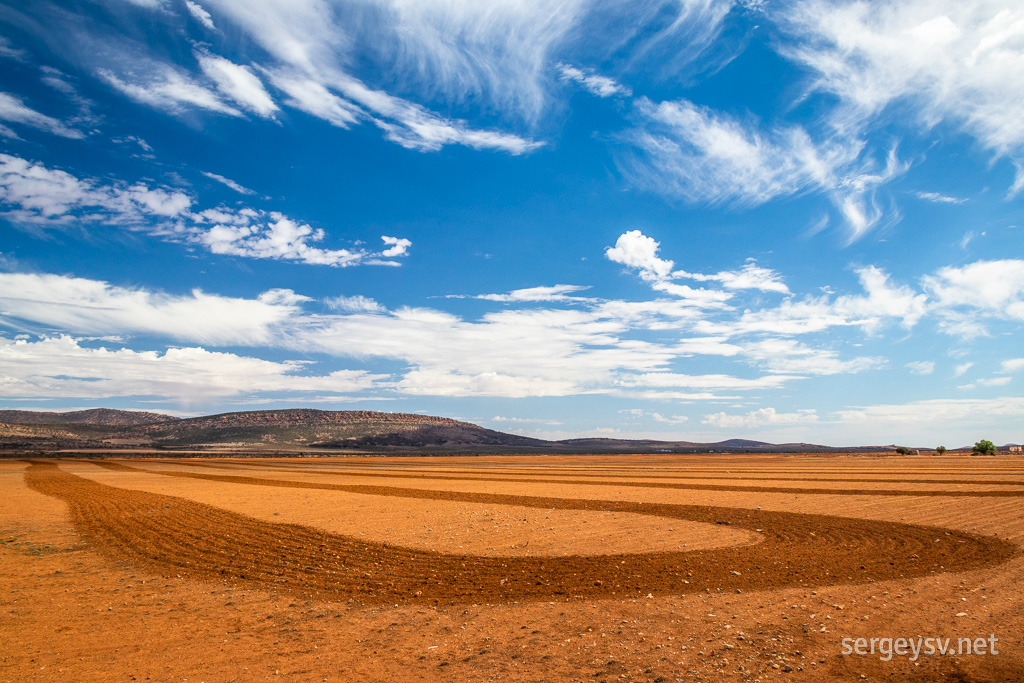 The lines in the dirt.

I make a lunch stop at the Surveyor’s Mark – a very picturesque place near the highway with a perfect view of Flinders Ranges. It’s quite nice to have a meal with no one around but sun, wind and majestic scenery. Light changes quickly with all these patchy clouds covering the sky, but I still manage to make a few decent shots of the ranges and the surrounding area. Love those layered ancient hills. 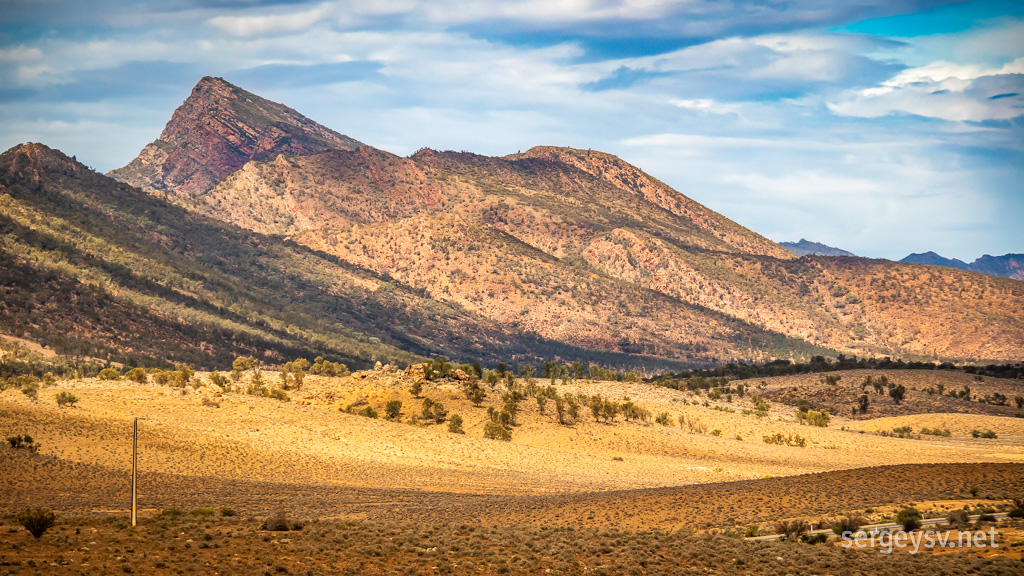 The Mount Aleck in the distance. 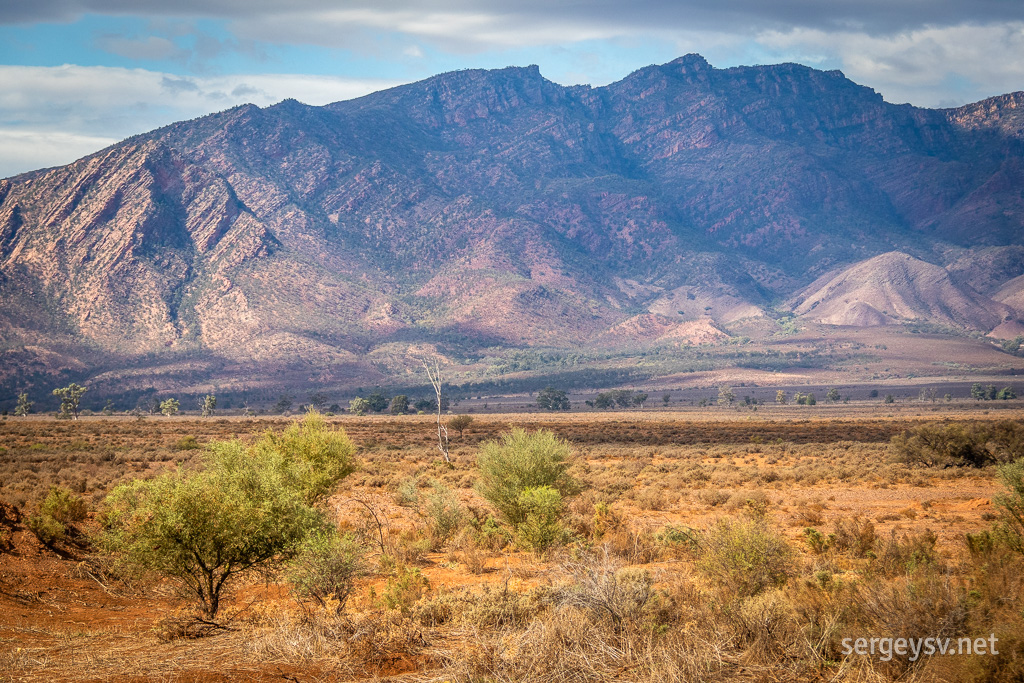 The layered rocks of the Flinders. 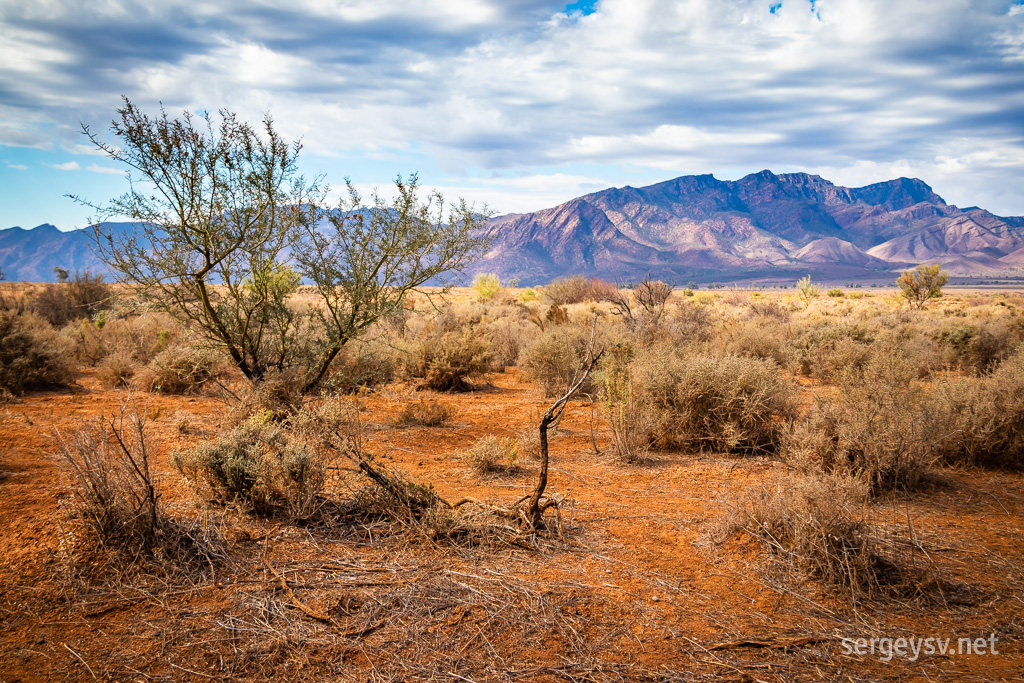 The vegetation is scarce. 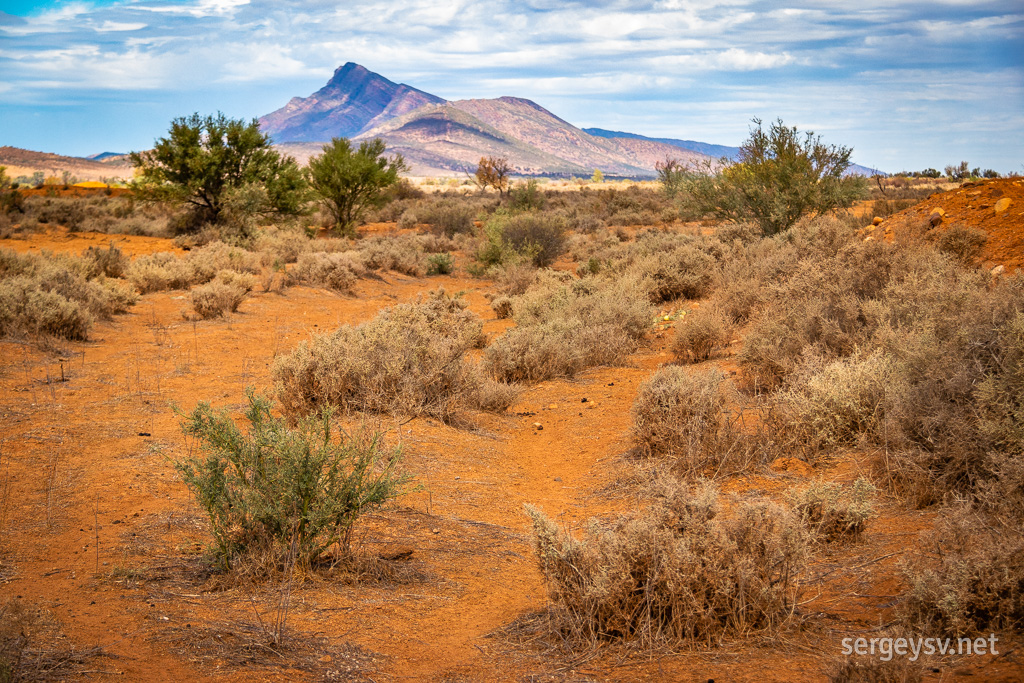 Mount Aleck from a different angle.

On my way northwards I check the Fuel Map app and see that the cheapest fuel appears to be in the town called Copley. Both servos turned out to be closed, though. Must be public holiday. Oh well. Looks like Copley isn’t getting any money from me this time around. 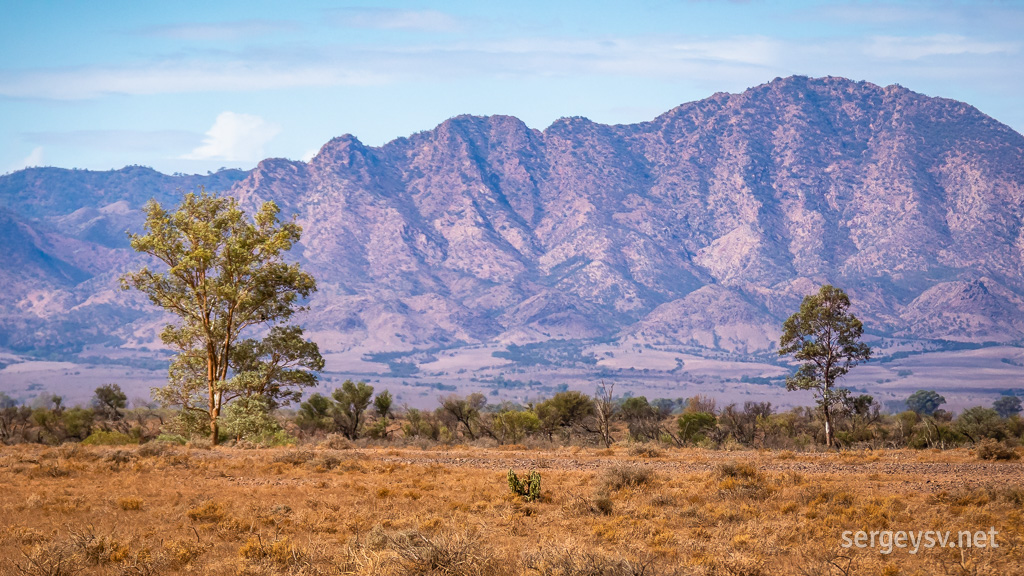 The last of the Ranges before I hit the deserts.

At 2:30 I reach Lyndhurst, where I finally refuel. As it turns out, you can pay for it by card with no assistance from the roadhouse now; but it’s a bit of a disappointment when I want to treat myself with an ice cream and they don’t have any. Oh well.

Last year I took a turn left from here to explore the Strzelecki Track; this time, I continue forward. I have a chance to mention about it to someone else though, when I stop to air down: a guy with a camper trailer in tow comes over to ask for "local advice". Looks like after 8 years of living in Australia, I have finally blended in. The guy is heading towards Marree, where he’s going to book a scenic flight over Lake Eyre. Godspeed! 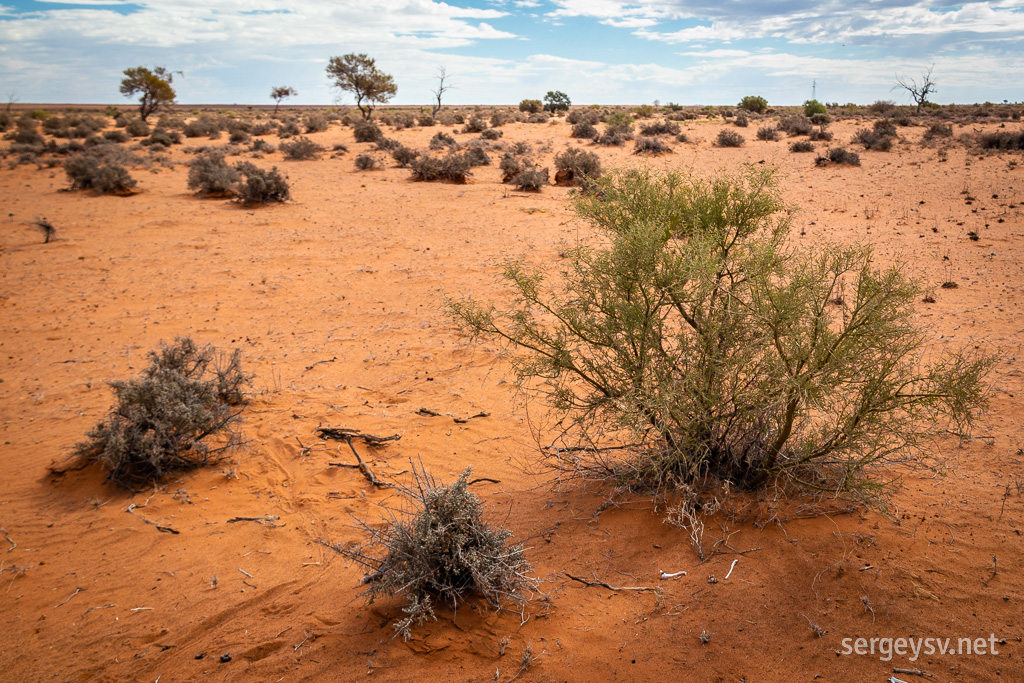 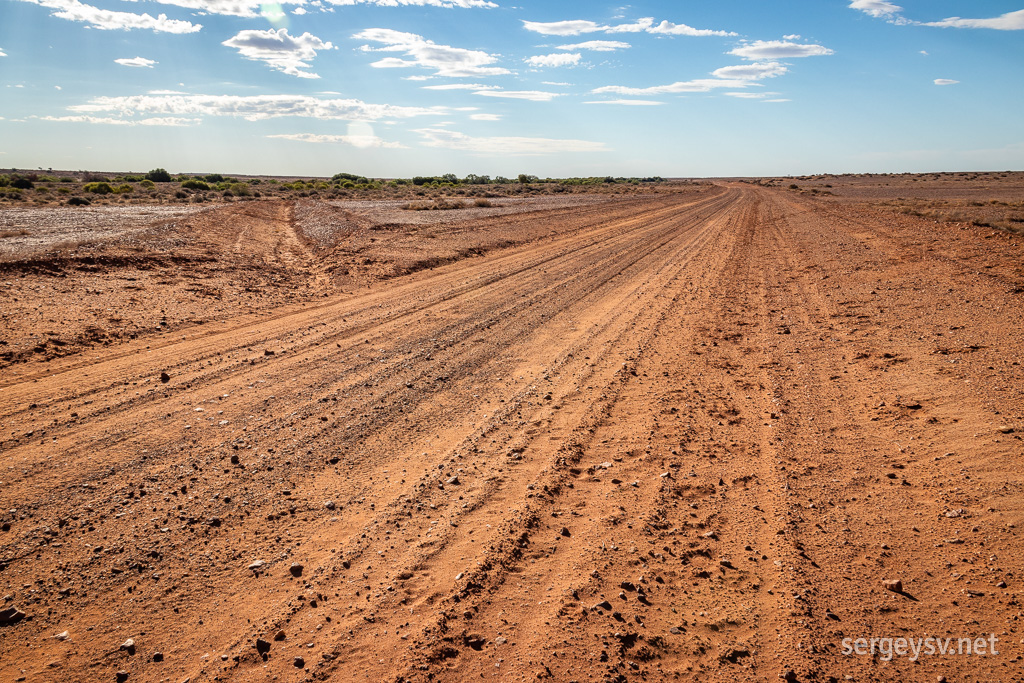 The road from Lyndhurst to Marree is not sealed (for the most part), but is of very good quality: I probably shouldn’t have even aired down for it. Northwards of Marree, though, is a different story. From the Oodnadatta Track I take a turn north towards the Muloorina Station, and the road is quite good as well; but as soon as I pass it and drive further, towards Lake Eyre, it deteriorates rapidly. The country around me changes to yellow sandy dunes, and the road is sandy as well, and unbelievably corrugated: the worst possible combo! 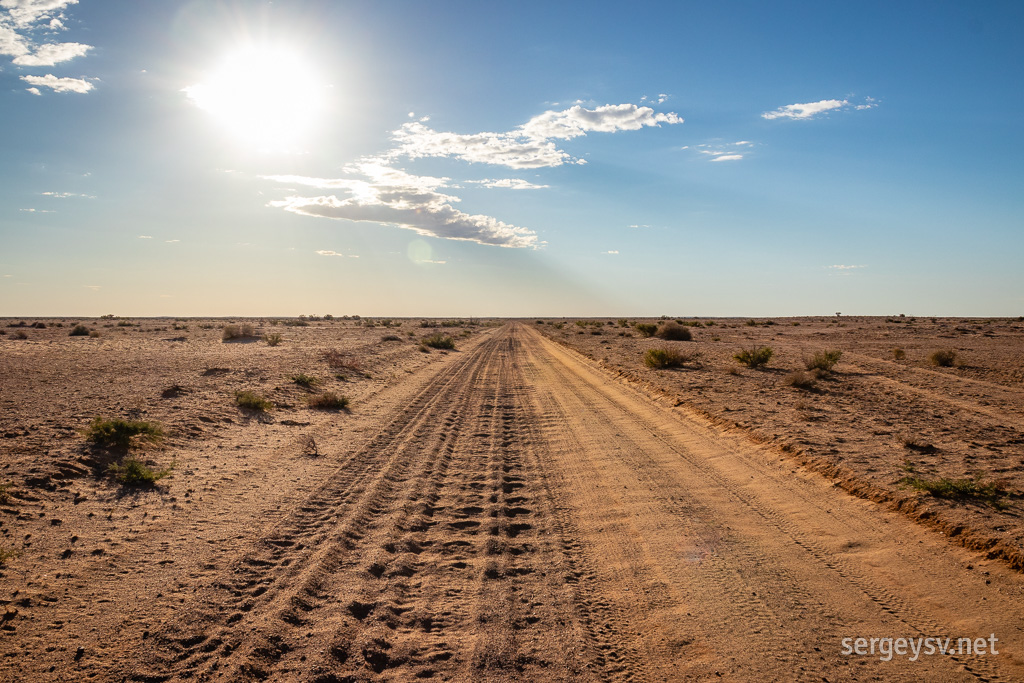 The corrugations are just outrageous. 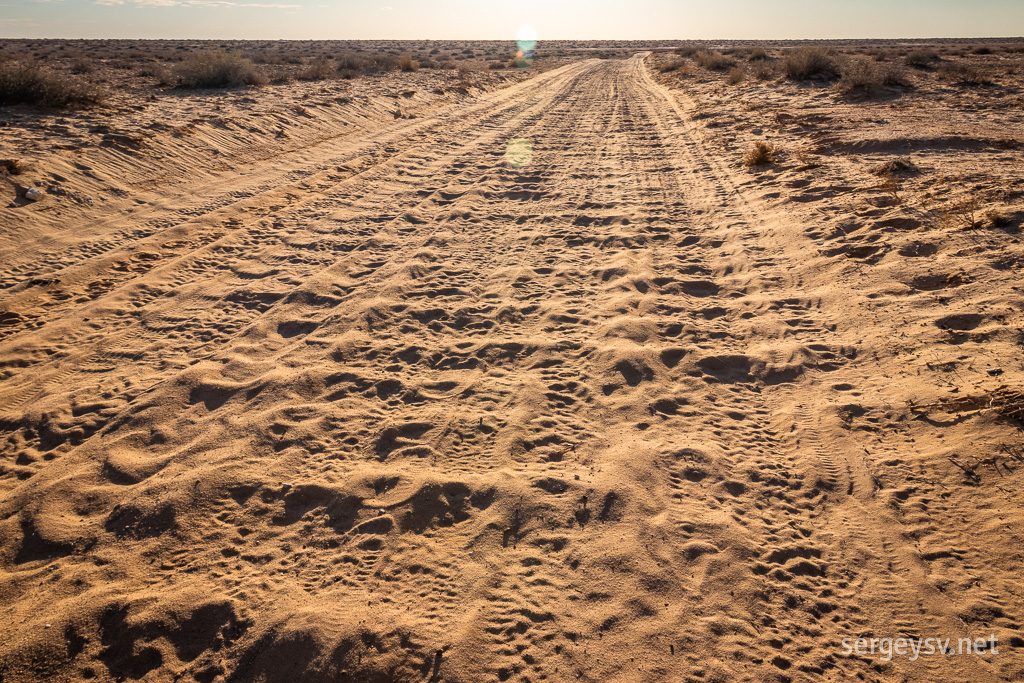 And it only gets worse.

Still, at around 5:20 in the evening I finally reach the parking space next to the Lake Eyre. One hell of a bumpy ride for just one information board and a lookout where you’re not even allowed to camp! The surrounding views are totally worth it, though. The famous Lake, the largest in Australia, is vast and silent and flat as a biscuit. No one around for many miles... which is about 40 km in this case. 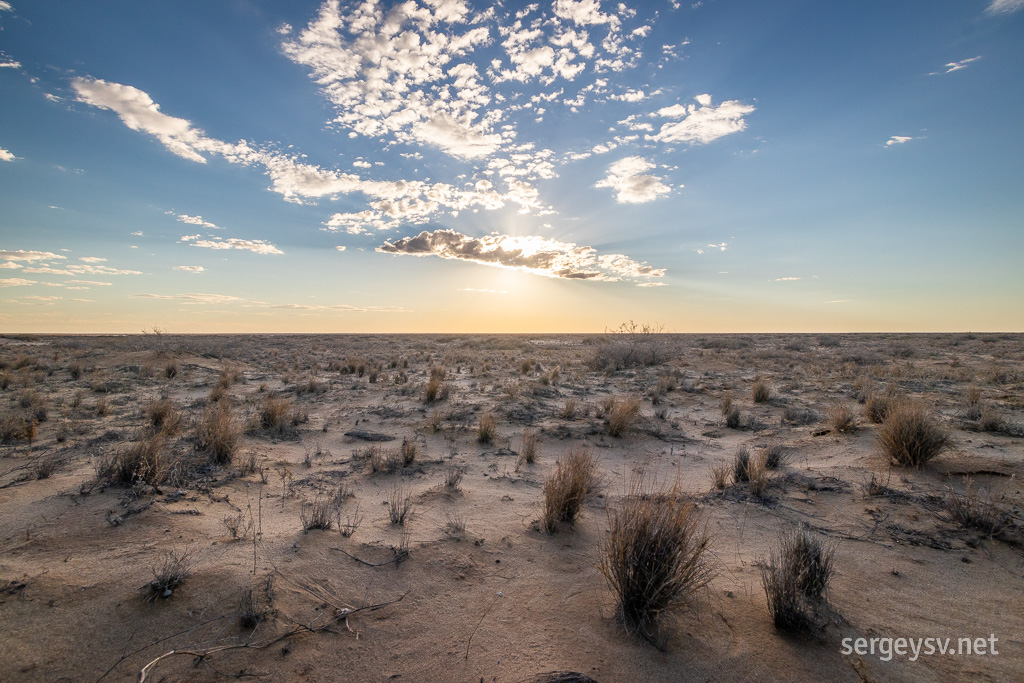 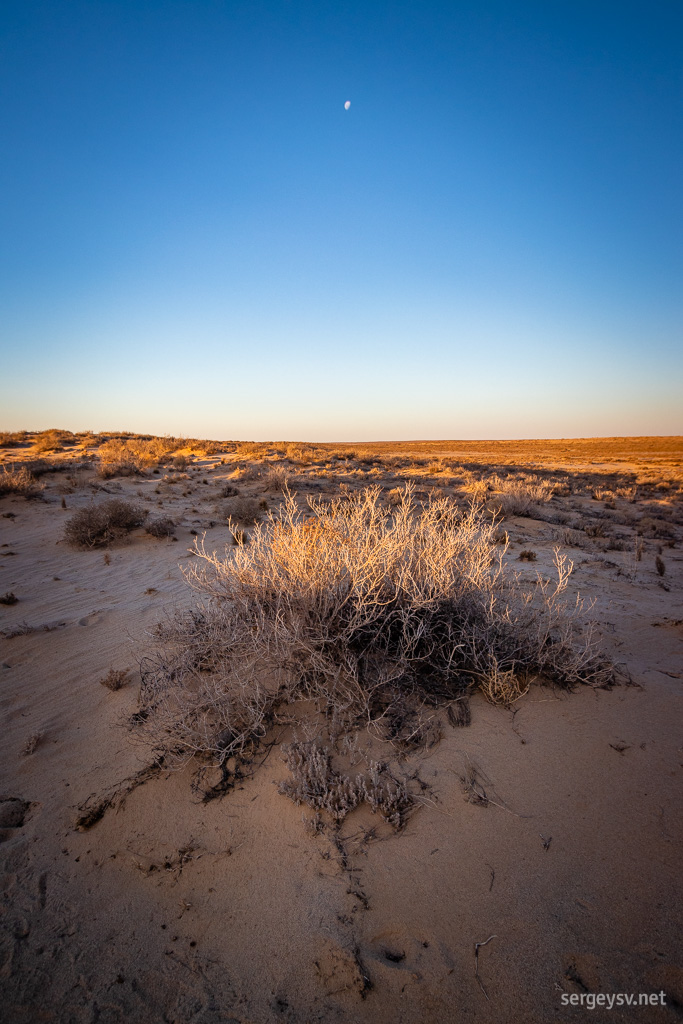 The day is ending fast. 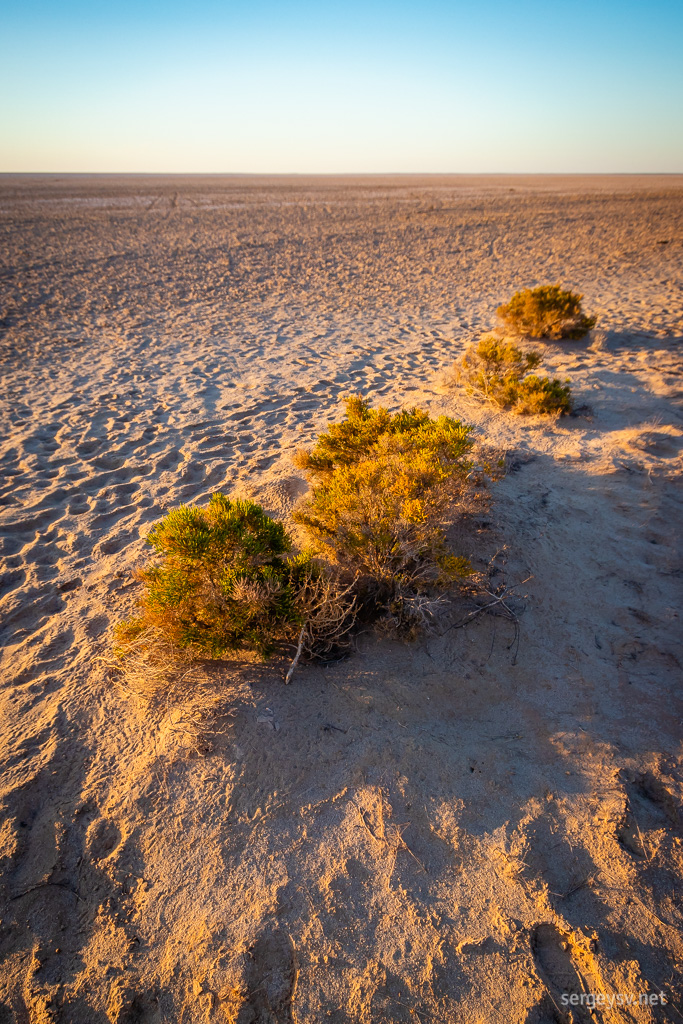 As usual, this absolute solitude is a bit spooky. Trying not to think about the fact that I still don’t have a sat phone, a HF radio, or even a personal emergency beacon, I take out the tripod and commence my photography hijinks. Those cool sunset pictures ain't gonna take themselves! 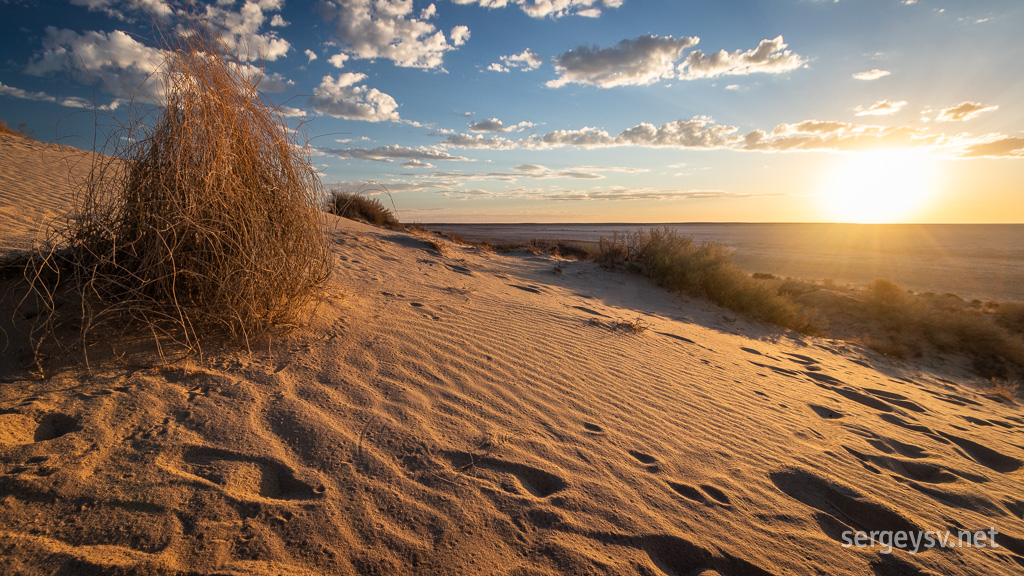 The surrounding dunes are pretty cool, too. 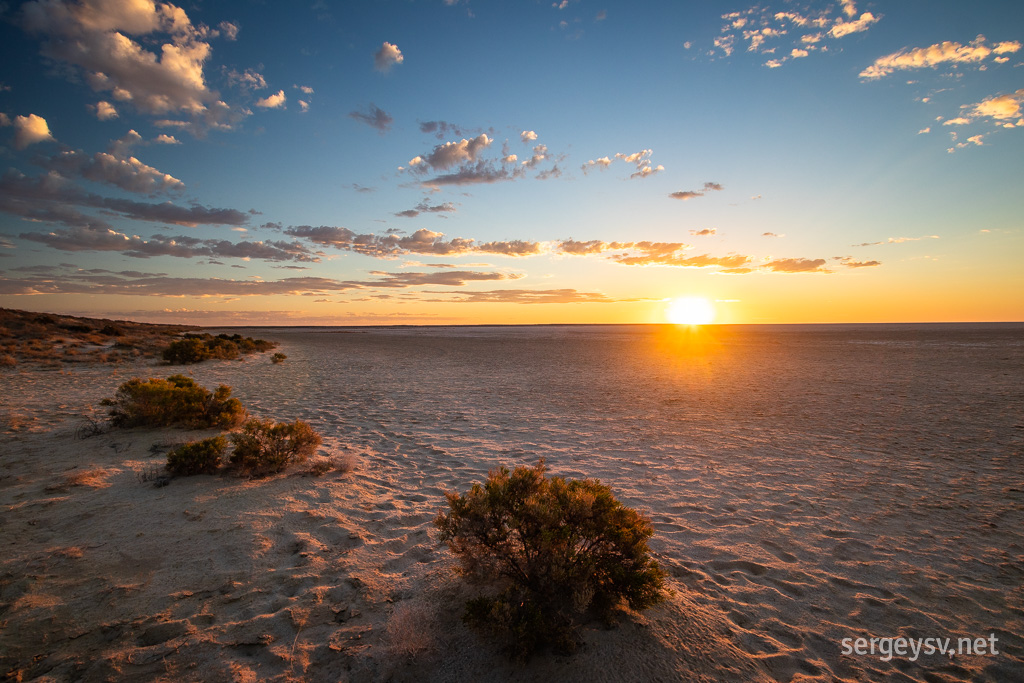 Tyre tracks on the surface of the lake surprise me. It’s extremely dangerous to drive here; the thick, salty crust only appears to be rock solid, but it’s quite moist underneath – even at this dry time of the year. Easiest way to get yourself bogged in the middle of the desert. I wonder how this place looks when it does have water, which only happens a few times a century. Must be a spectacular sight of its own. 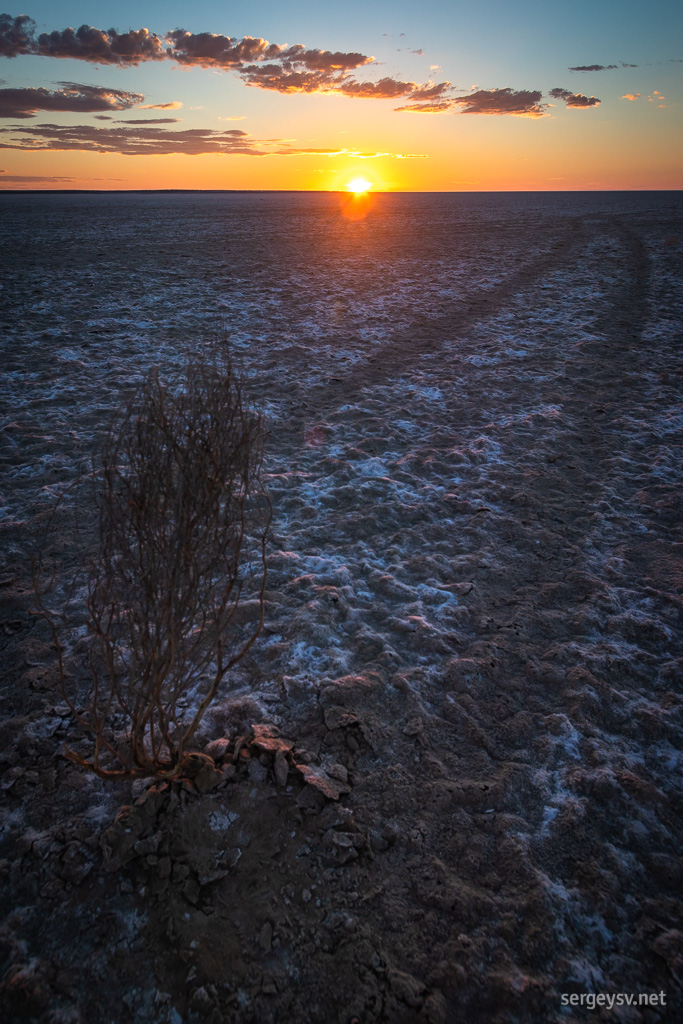 Someone couldn't find a better place to practice their driving skills.

It is so incredibly silent and beautiful around – if this dry, harsh and terse beauty of Australian desert is your kind of thing. The sun sets quickly, and the waxing moon takes over, and the vast dune plains are barely visible in its ghostly pale light, and there’s not a sound to be heard all around me, except for the wind in the desiccated twigs. I know that camping is not allowed here, but I’m not really camping here, am I? I’m just making some photographs and then sleep in my car. No tents, no fires, no beer cans – I'm a pretty boring camper when I'm on my own!

At around 4 in the morning I leave the car to take my first ever pictures of Milky Way – I've never done any astrophotography before! It's pretty spectacular at this ungodly hour, rising straight up from the ground and flowing right across my head to disappear beyond the opposite edge of the horizon. And the night is not cold at all: about 18 or 20 degrees, from what it feels. Despite the fact that Lake Eyre doesn’t have an ounce of water in it, and that the sky is practically cloudless, the surrounding desert seem to be holding the day heat quite well. 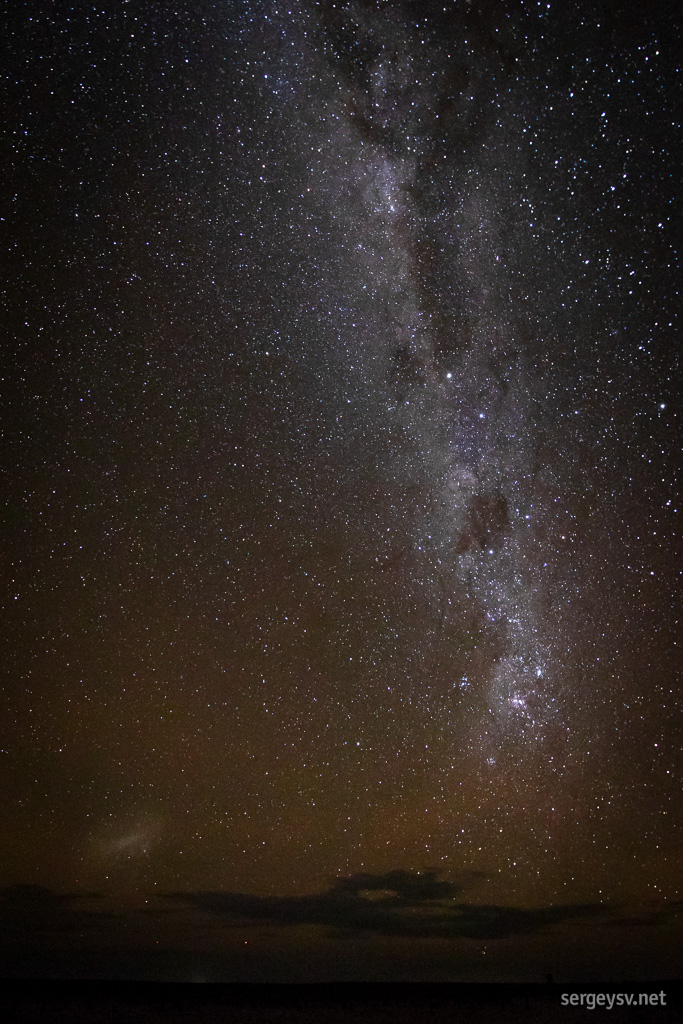 The stars of the desert. 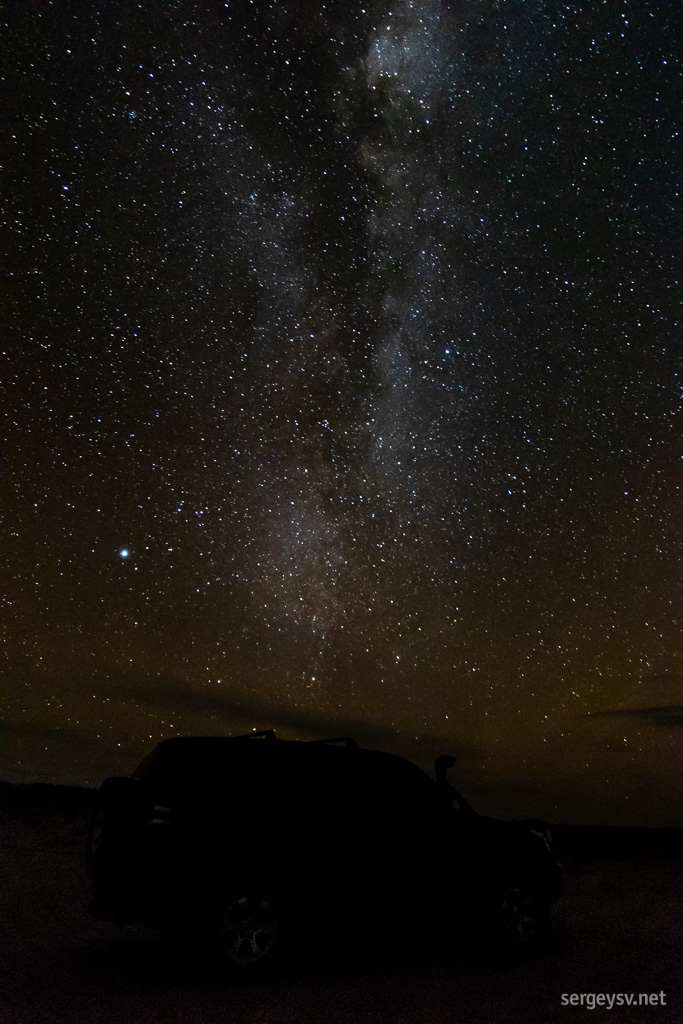 My car is resting, and so am I.