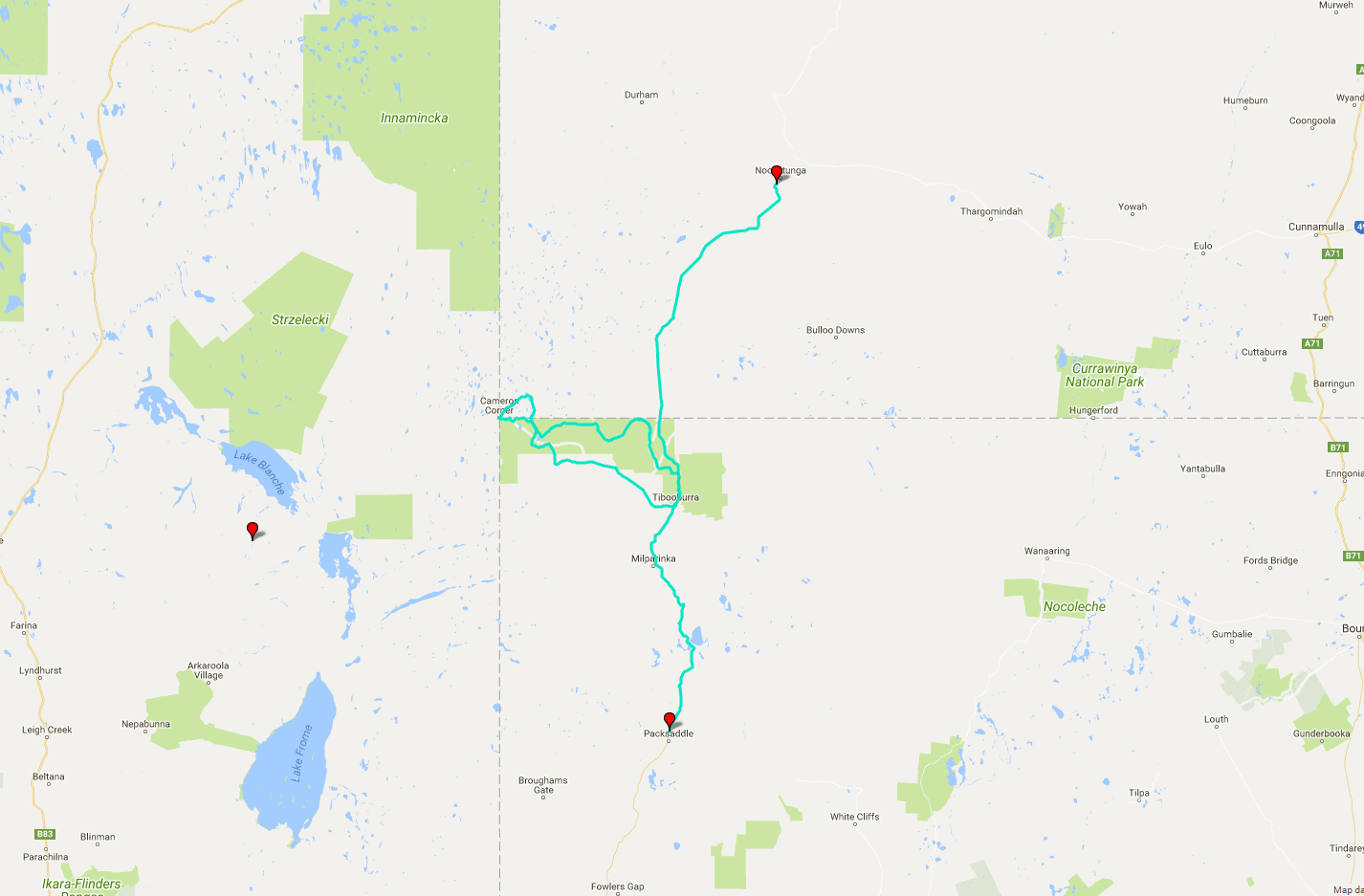 No wind at night = excellent sleep. At least while I'm still travelling with a tent, anyway. I'm off at 7:15, ready to explore my way down south. Coincidentally, this is where the sealed road ends for me as well. I stop to deflate the tyres next to the hotel's amenities block and suddenly discover that they have free showers there (unless you feel like making a gold coin donation at the hotel desk). Well, plenty of time for hygiene later. 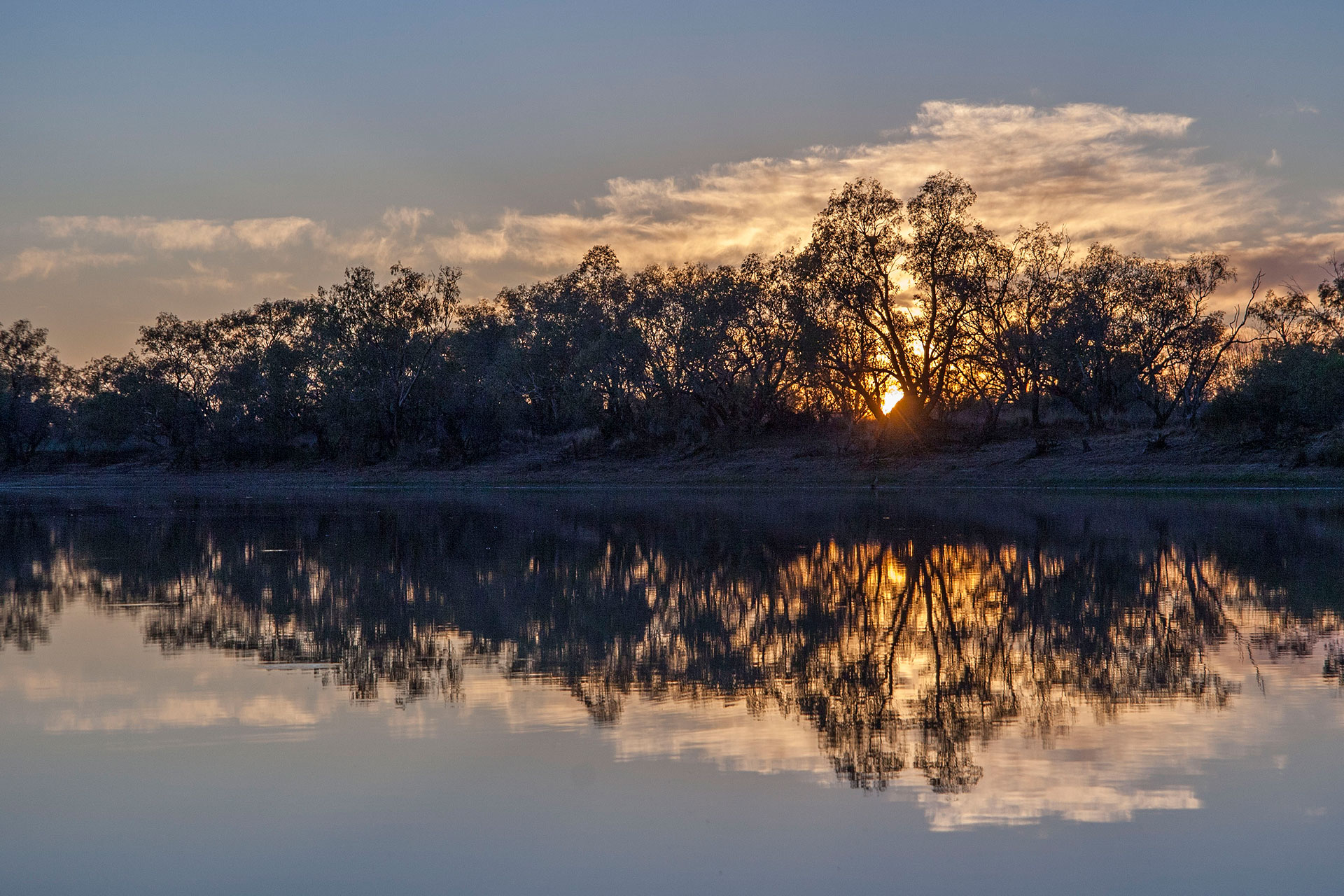 The highway, unsealed once again, greets me with the most enormous ruts that I've ever seen. Soon, however, the landscape changes to red sand and shrubland, and the road deteriorates rapidly. By far the worst “highway” I've seen during the trip. It is surrounded by thick mulga scrub with cows and calves crossing the road every so often. 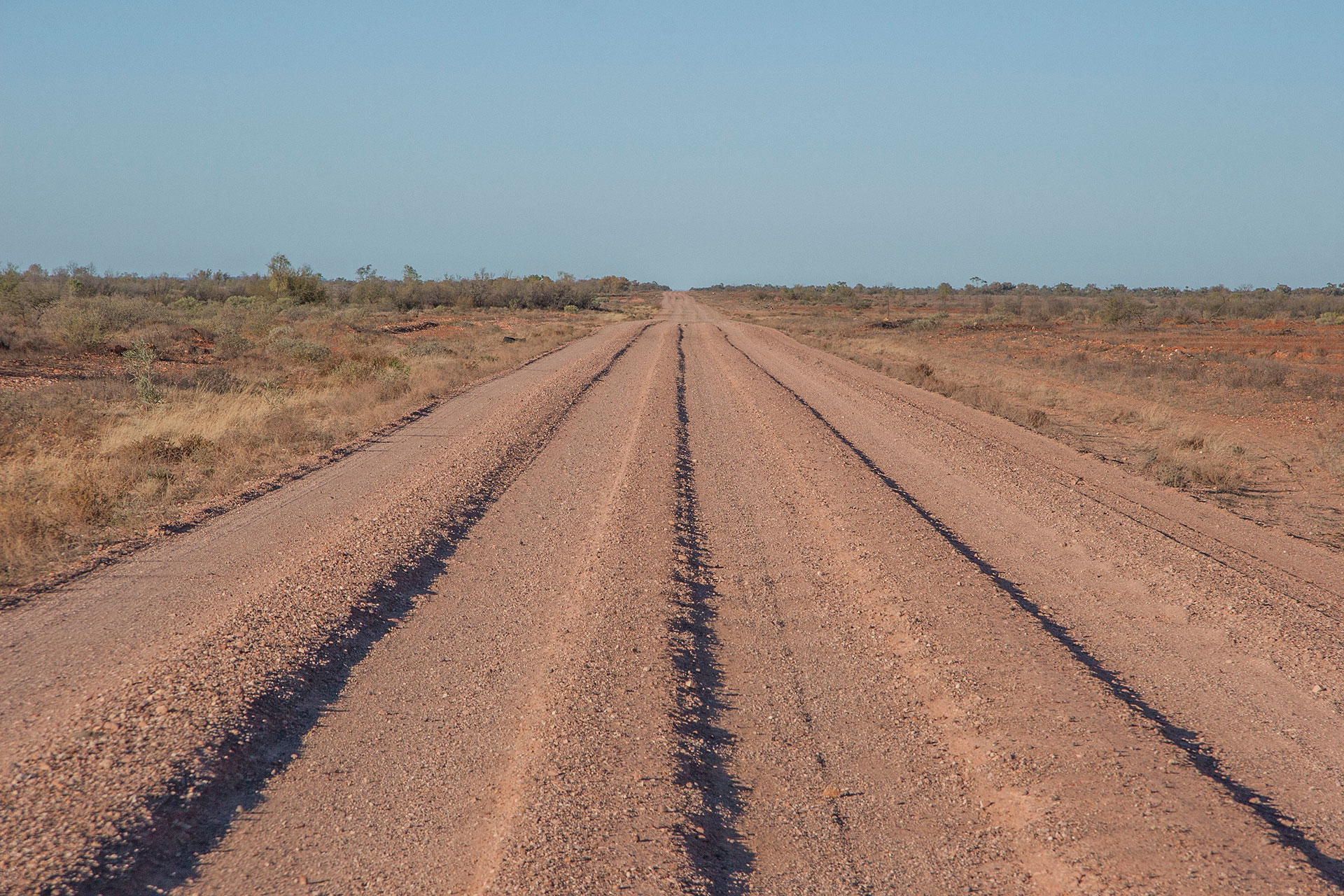 Ruts with a capital R. 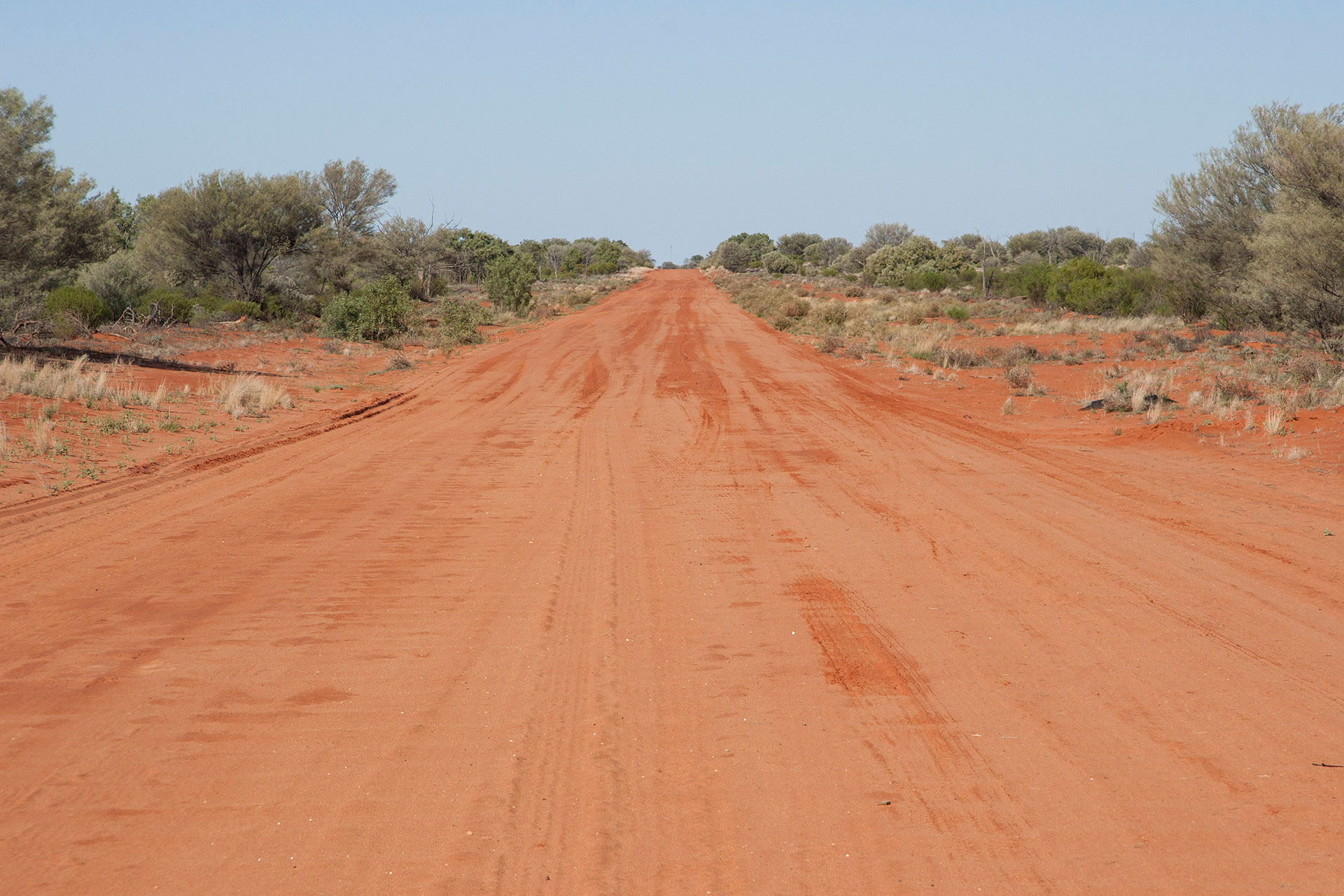 Red with a capital R. 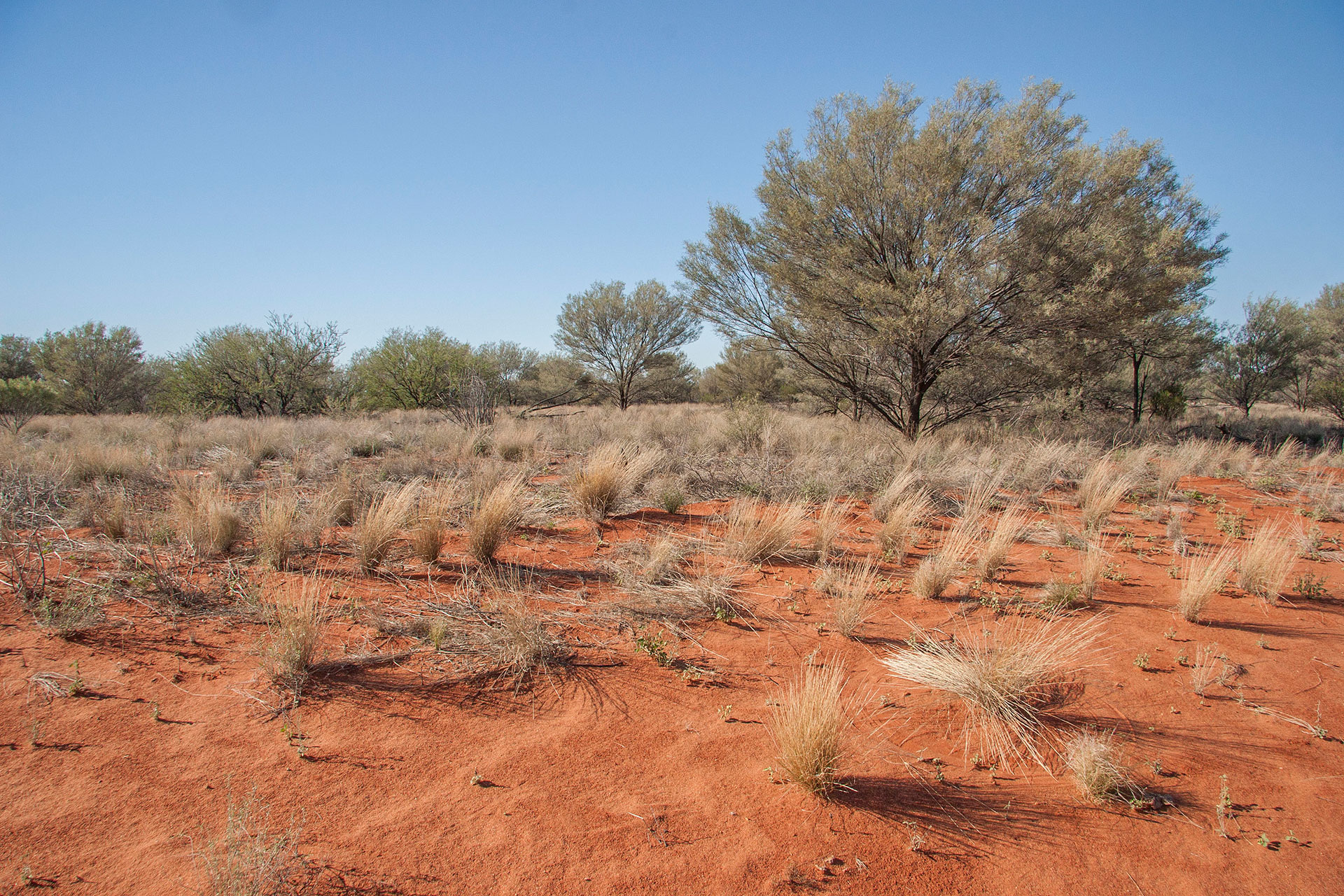 At 9:35 I reach the famous Dog Fence, which is also a state border. All one has to do to cross it is walk out of the vehicle, open the gate, drive past it, then walk out again and close it back. Queensland dingoes kept at bay, NSW sheep kept safe and sound. I can't believe that after all my travels (yes, all two of them) I haven't seen it yet in person. Where do they hide it on the sealed roads? 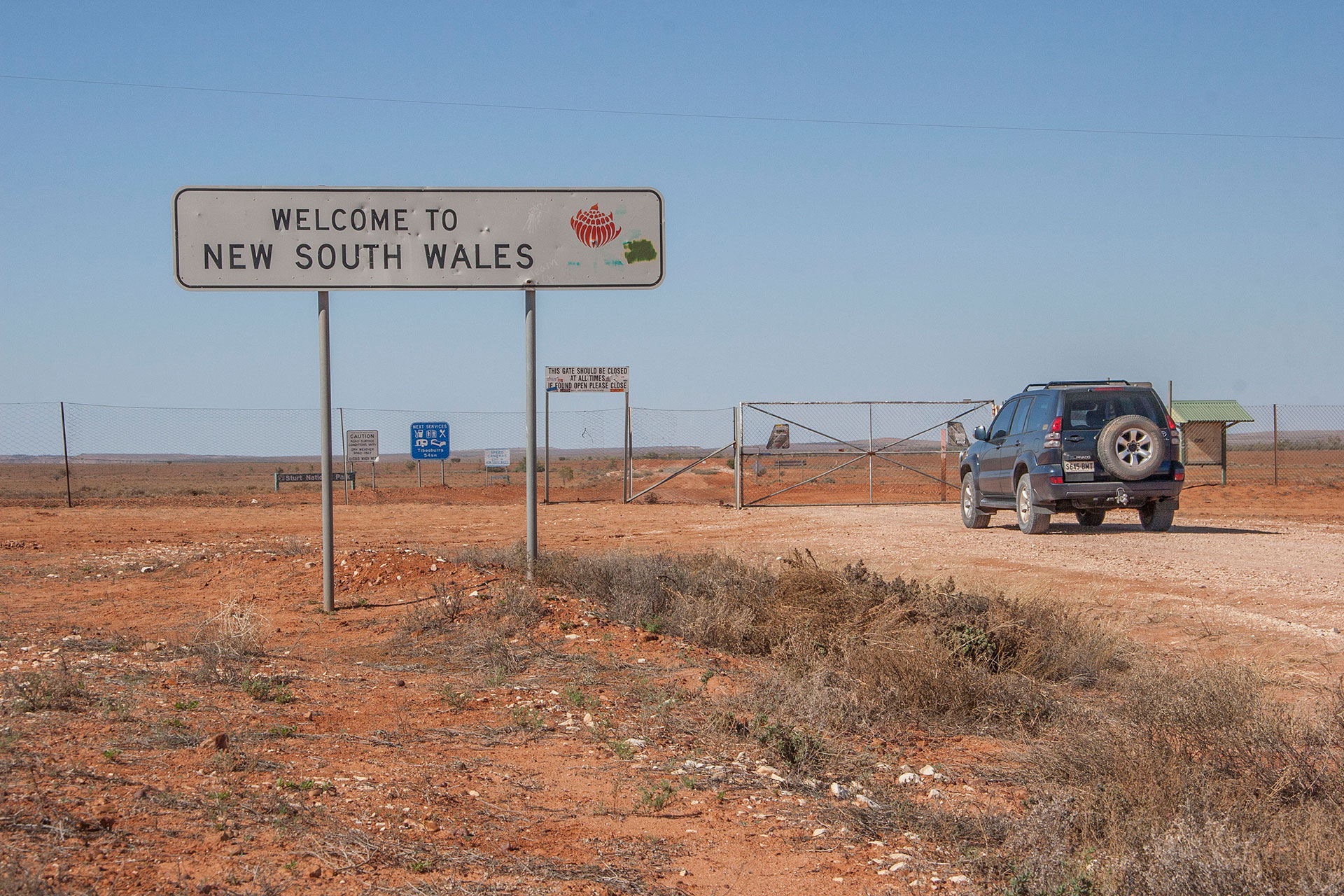 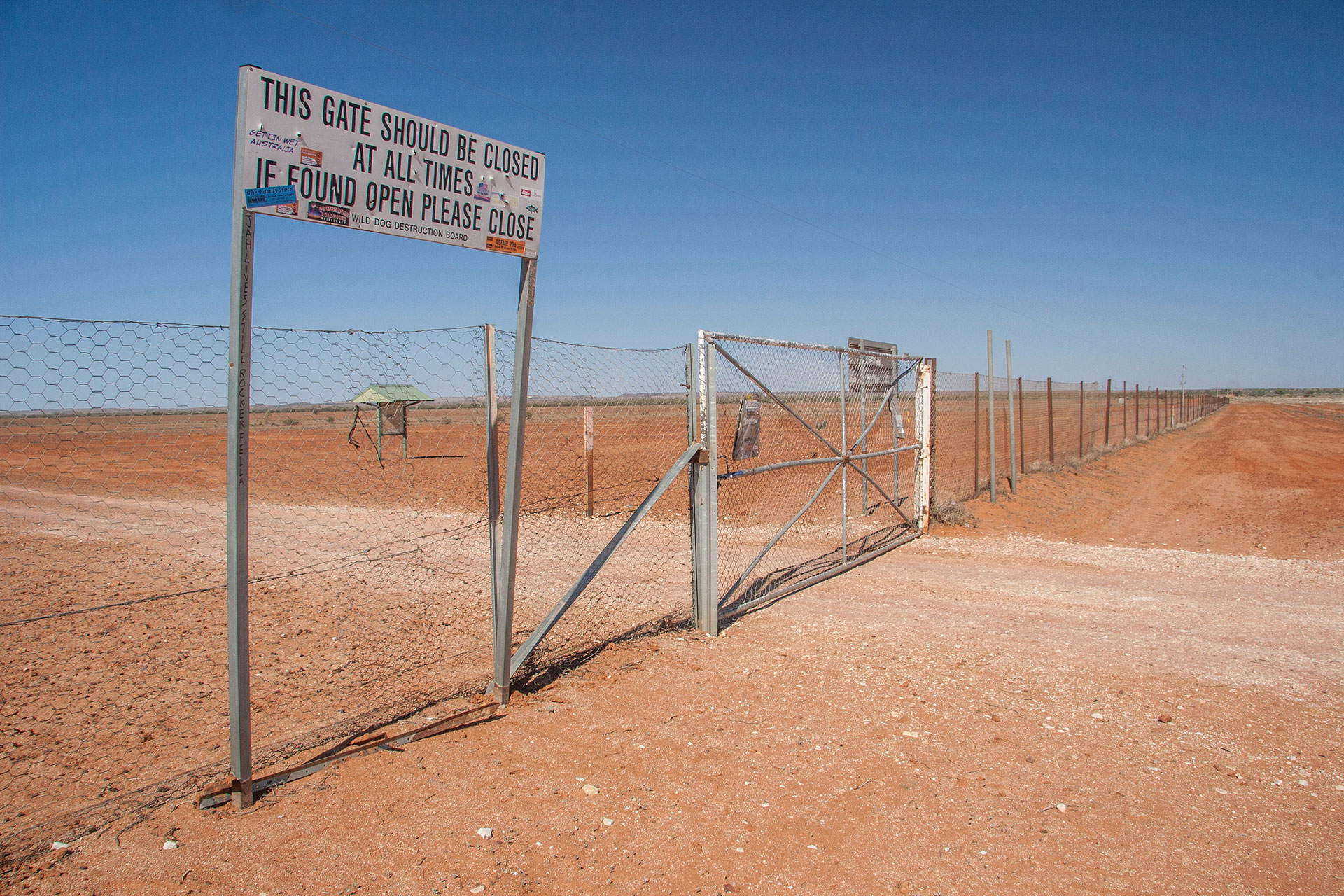 An hour of a more or less decent dirt highway later I reach Tibooburra, NSW. The town is small and sleepy, but it boasts a fairly impressive sign at the entrance (with an even more impressive one on the other side of town). I make a half-hour stop there to refuel and eat another ice cream. Have only seen one person on the street during the entire time. Either the place is as small as it looks, or the locals simply aren't huge fans of getting up early on Sundays. 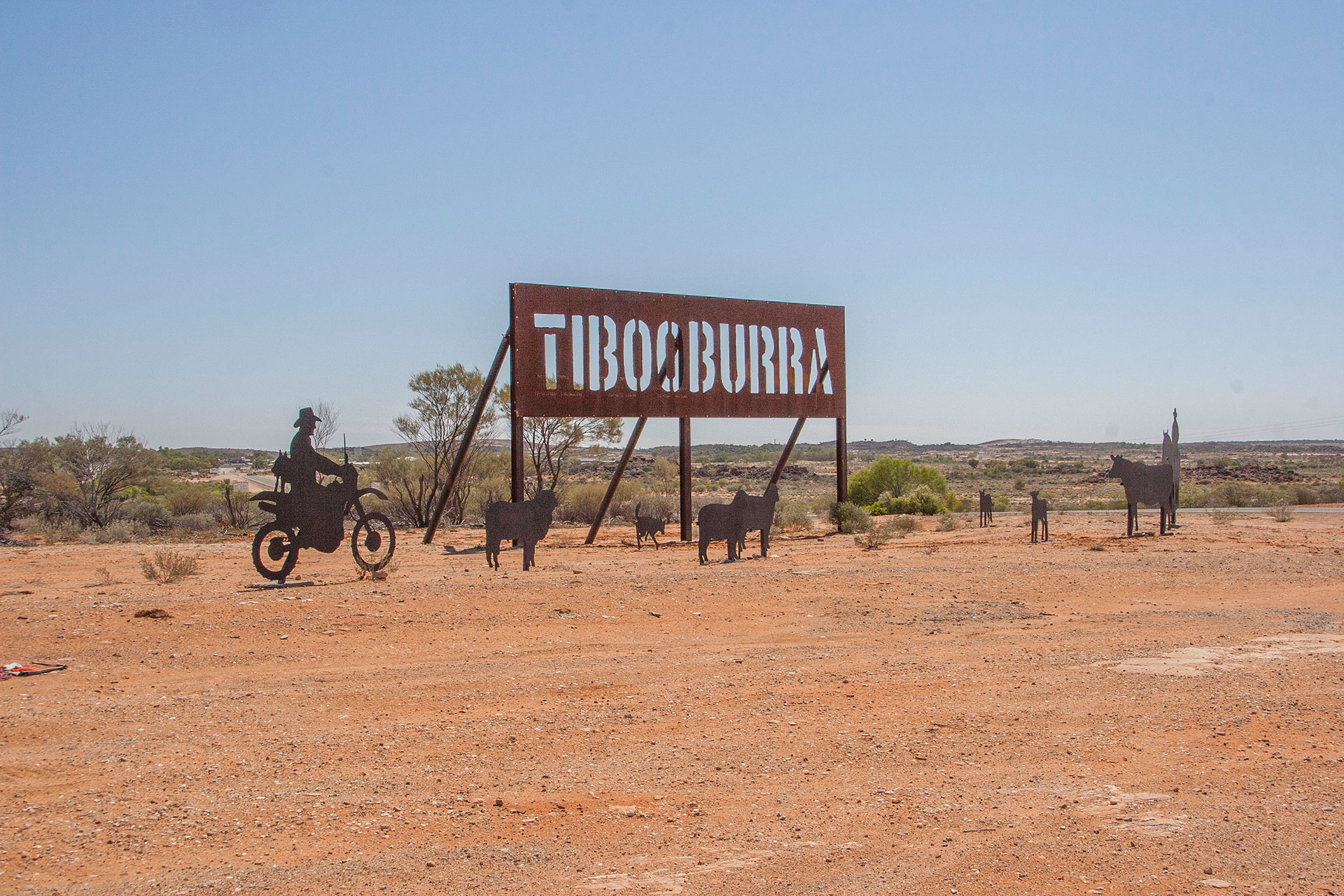 My major destination for today is the Sturt National Park. The road itself is of spectacular quality, vastly superior to that of the preceding highway. Paradox! It traverses the vast stony plains: white at first, then ochre and red. They, in turn, become slowly replaced by the red sandy country. 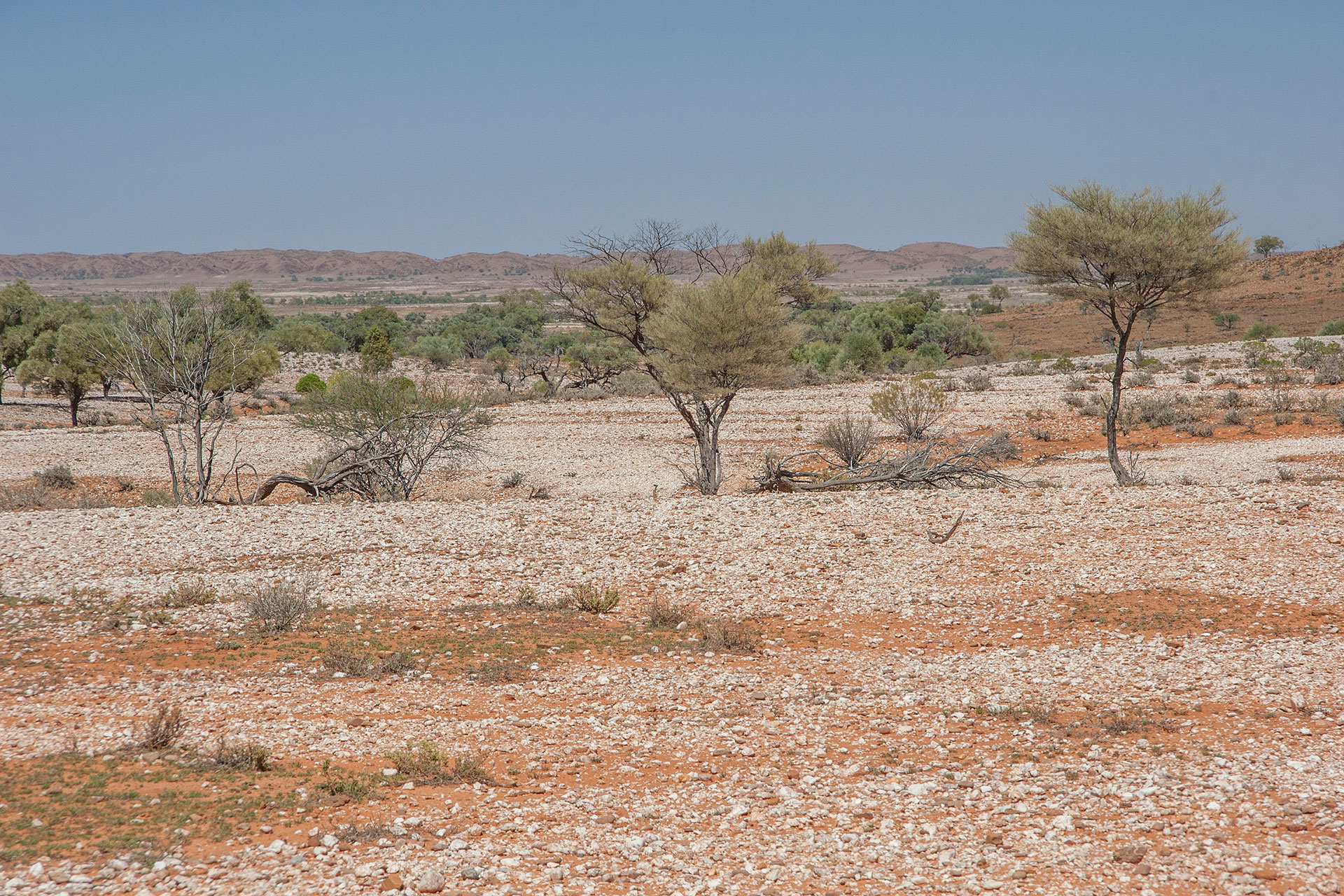 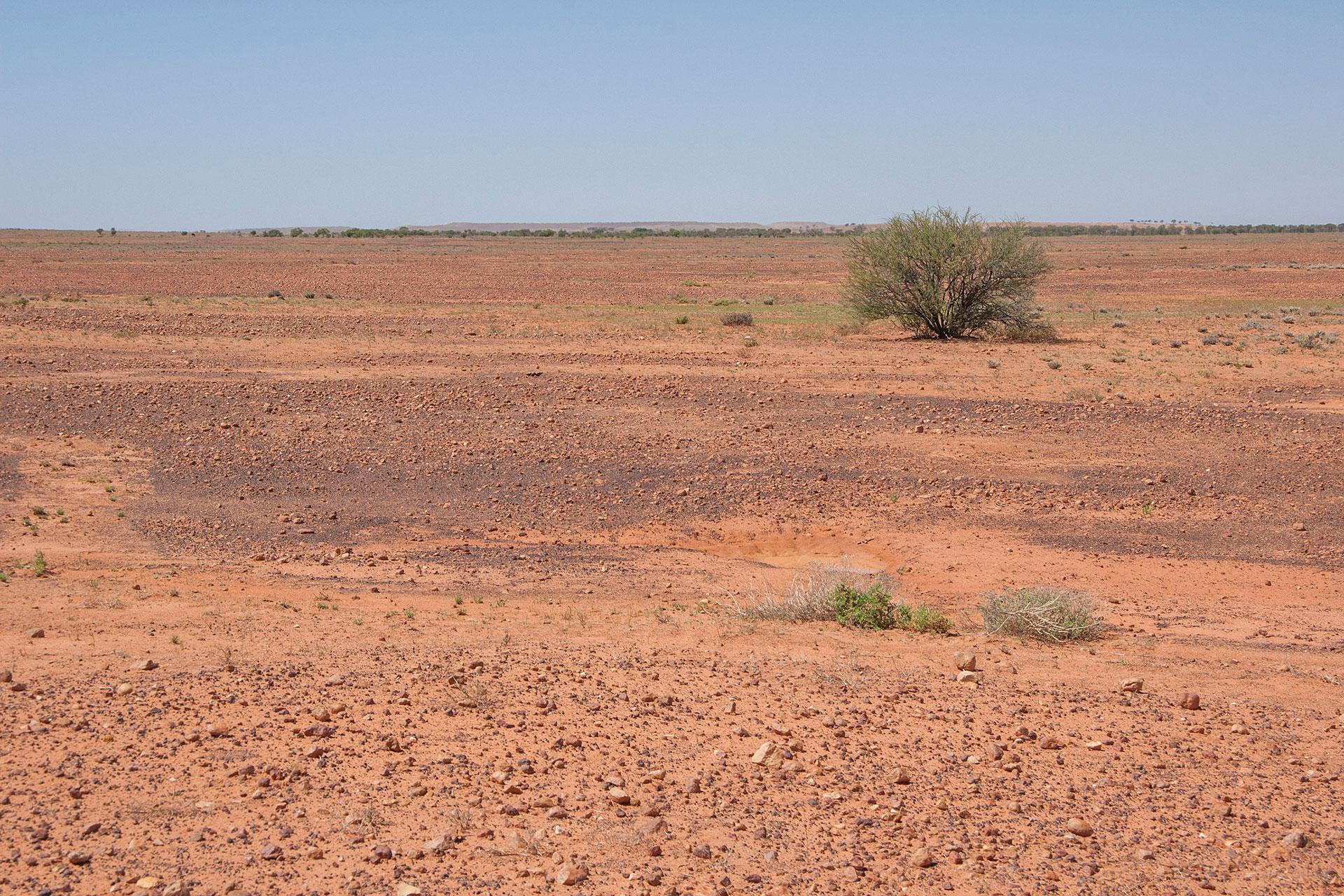 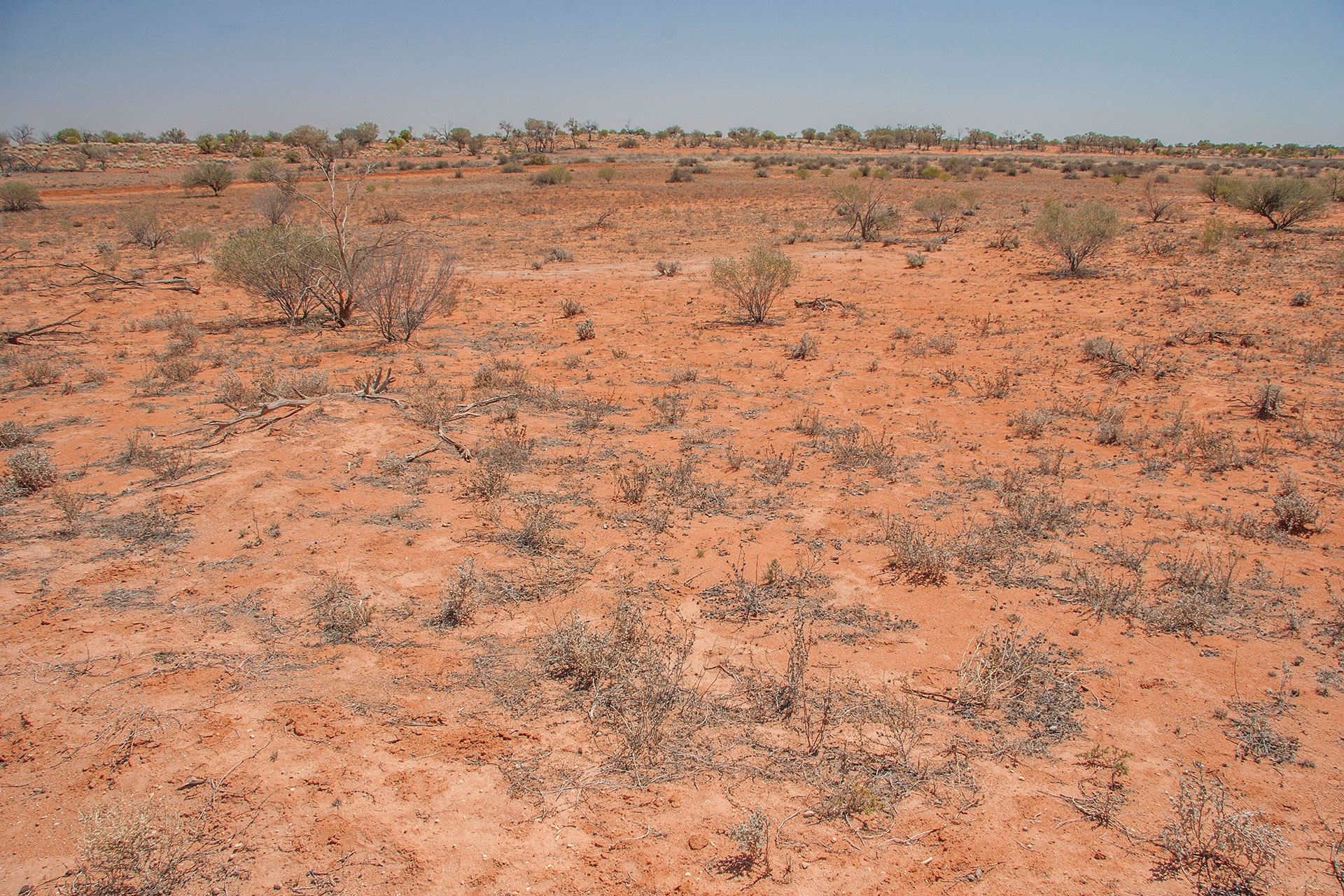 The park itself is quite big, and this division sums it up pretty well: white gibber, ochre gibber, red dunes; then the same backwards on your way out. An occasional claypan crosses the road sometimes, along with emus and lizards. This time I manage to take an excellent shot of one of those elusive reptiles (or Central bearded dragons, to be precise). Looks like within the National Park they're not as shy as out there in the wild. 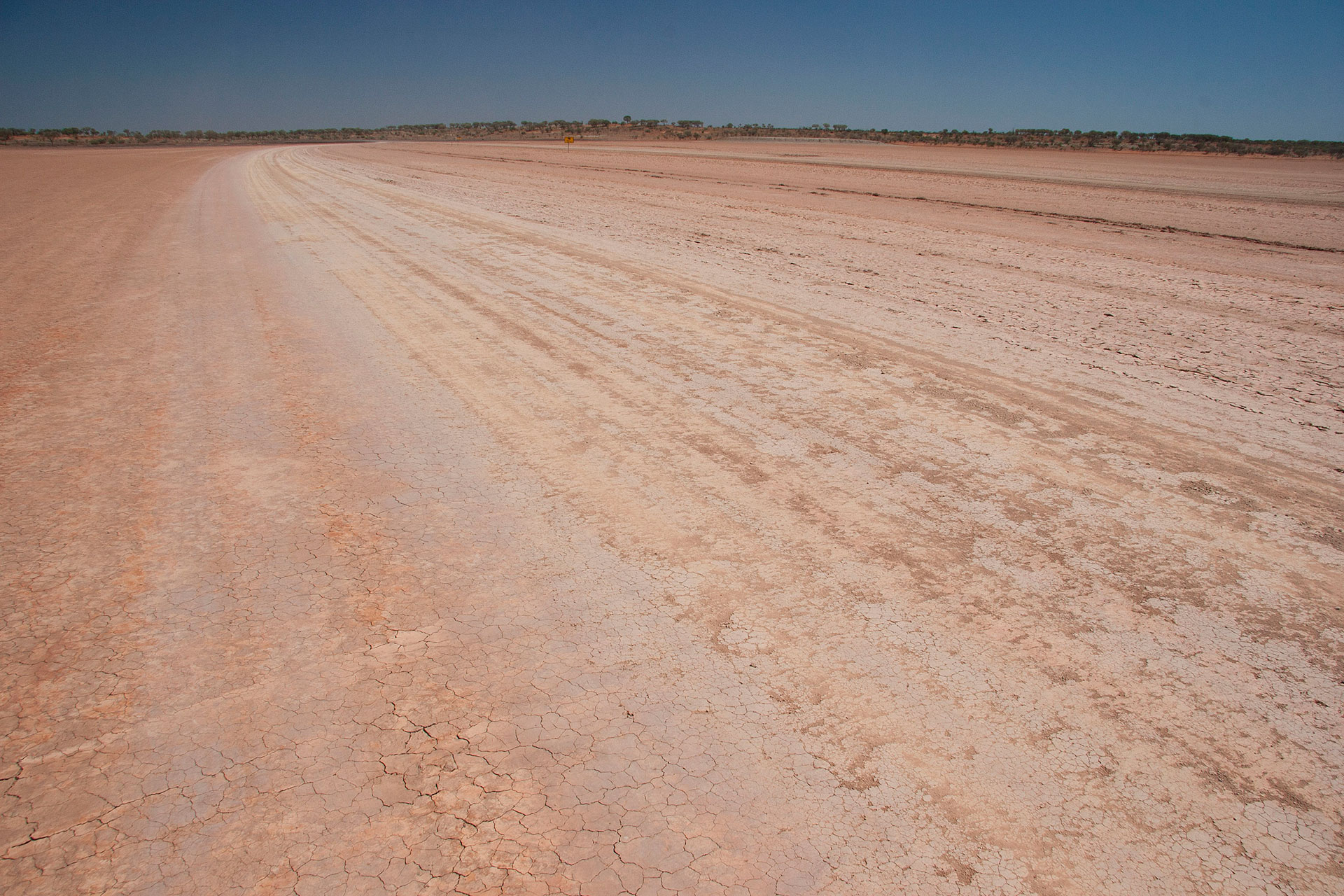 The road across the claypan. 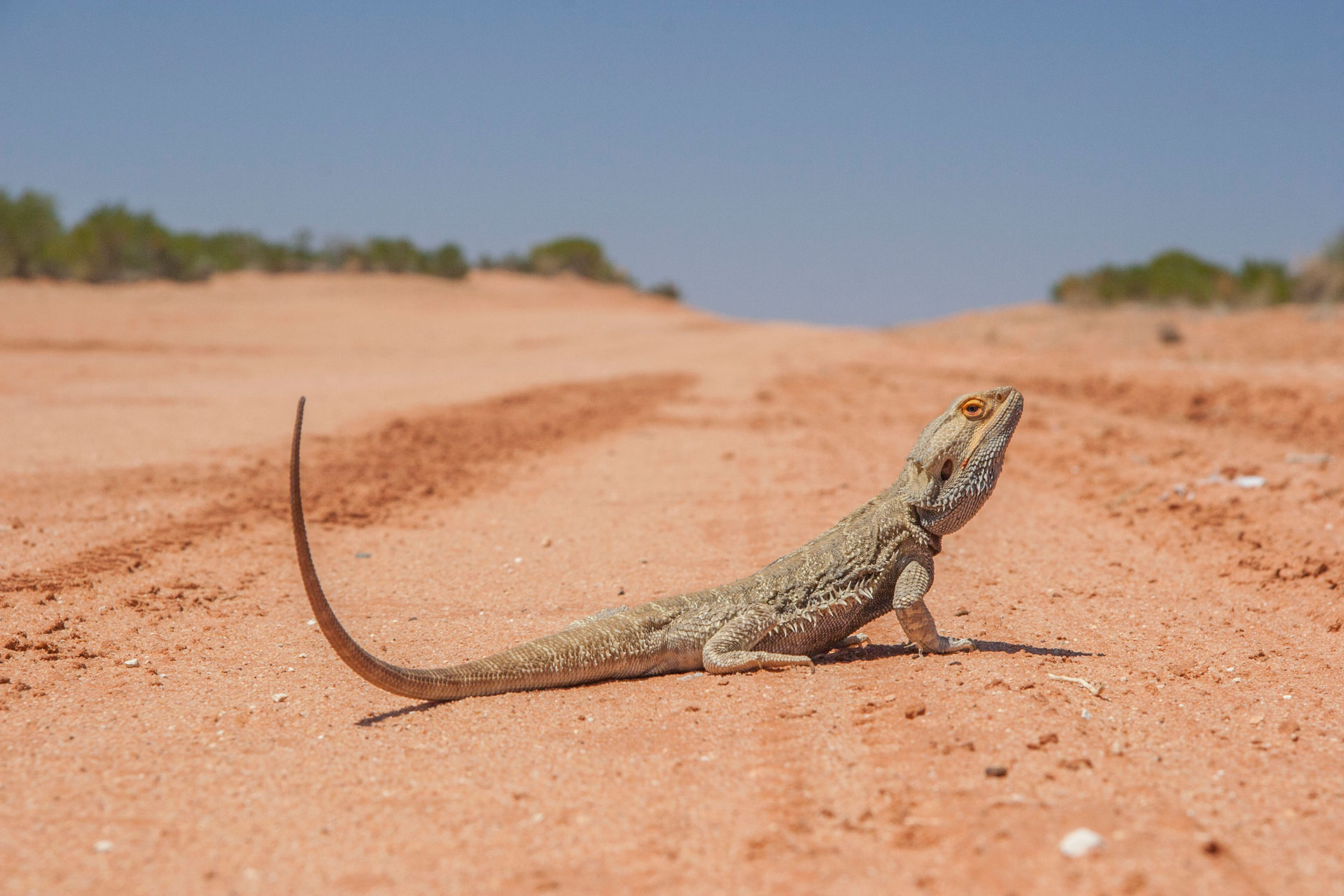 The dragon of the desert.

At the westernmost end of the park I enter the red dune country: pretty much the same as I was crossing yesterday. The road gets worse with every kilometre. As it nears the Cameron Corner, the corrugations become just horrible. The surrounding dunes are extremely scenic though, and emus of all sizes are all over the place. 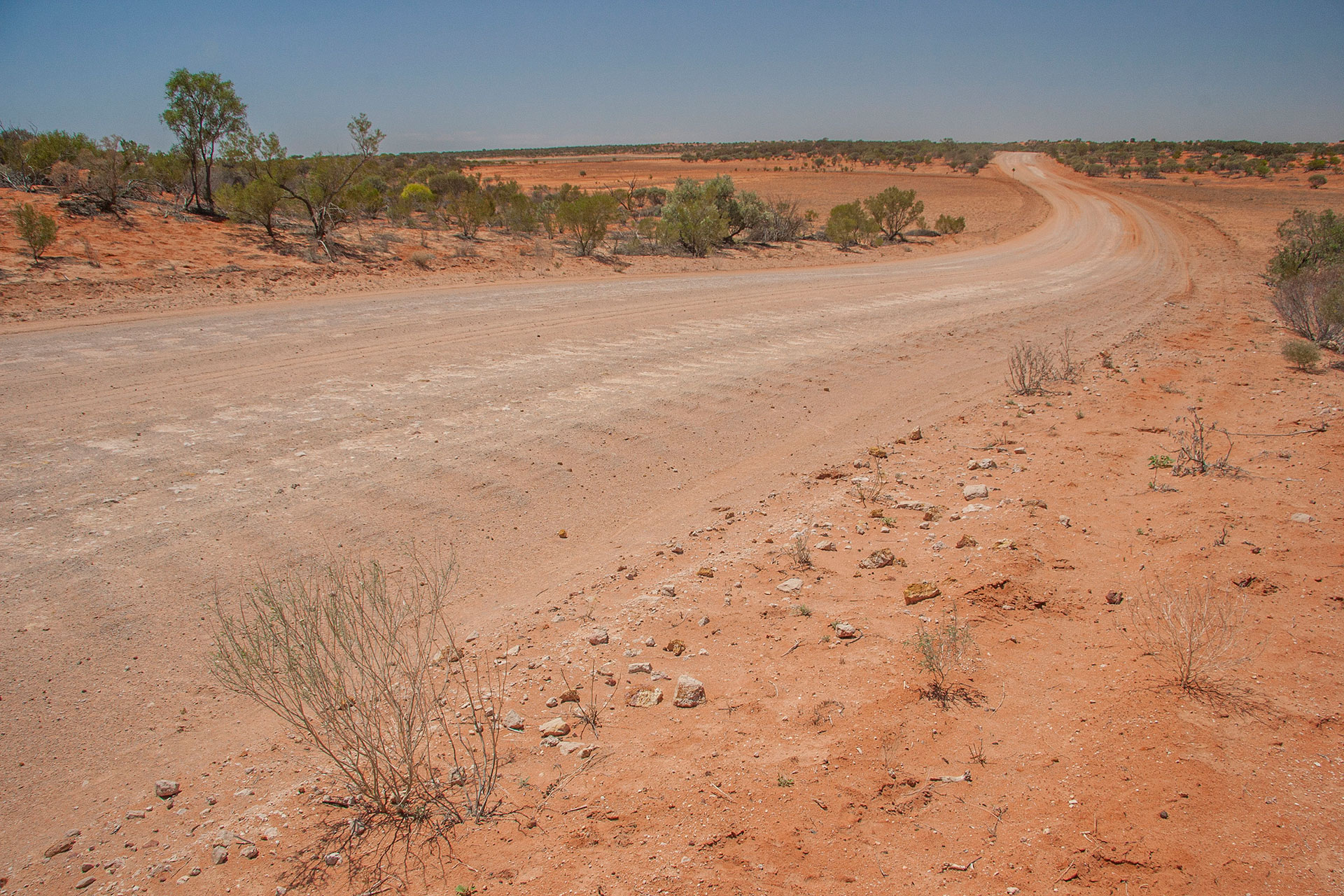 The road gets pretty bad. 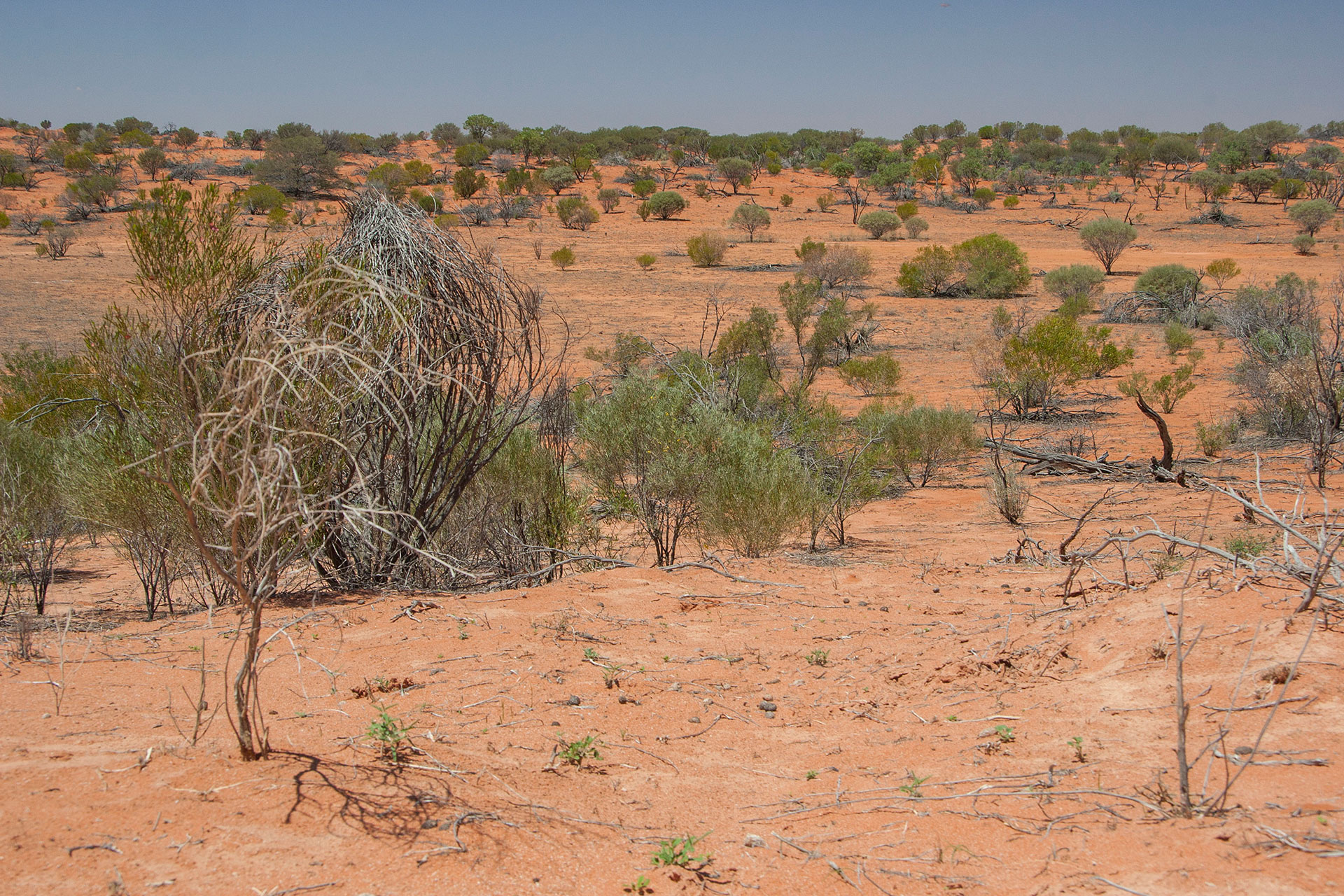 Finally, I'm approaching my destination. For the second time today, the dingo fence: this time, it separates New South Wales from my very own South Australia. Another ceremonial dance at the gate. 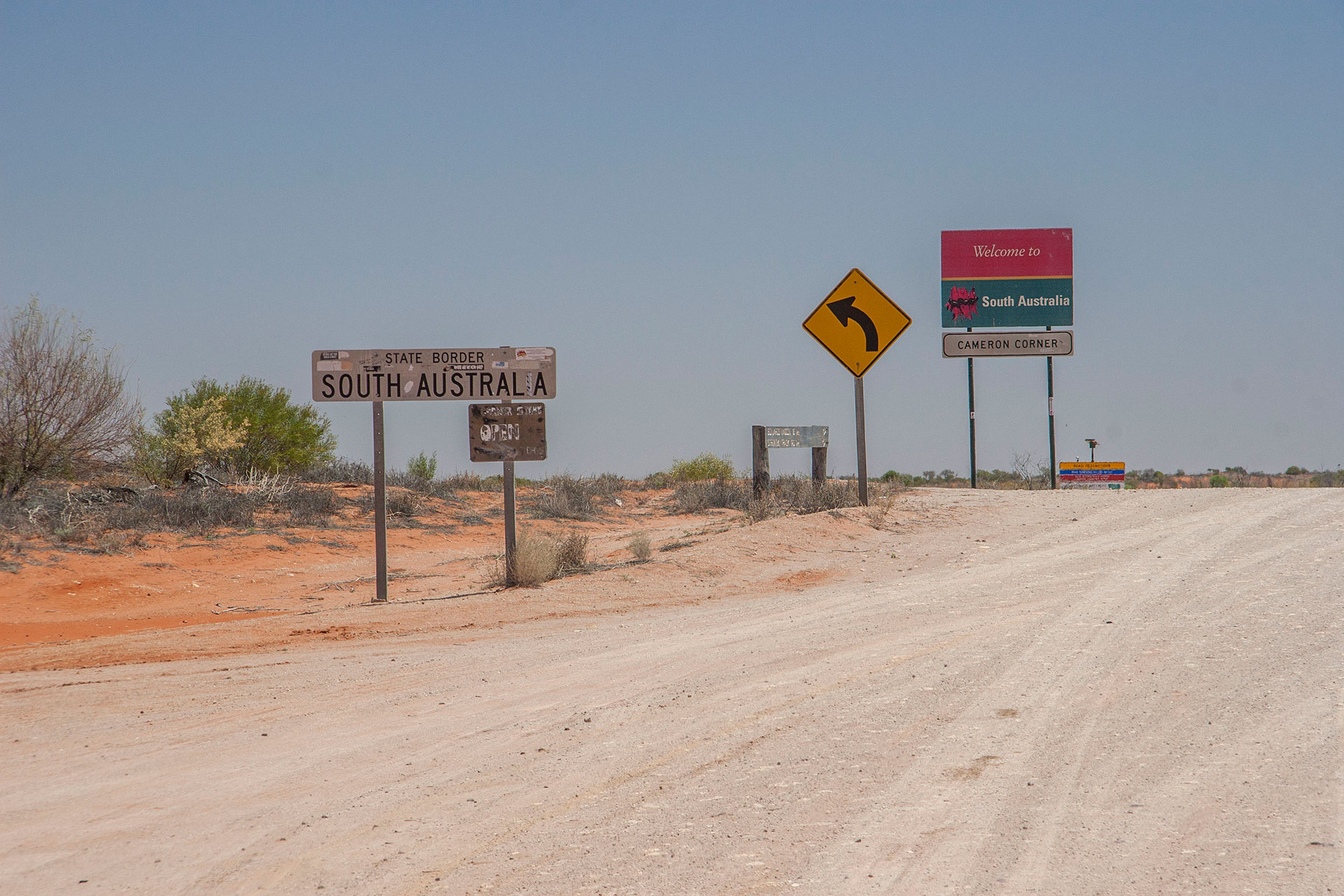 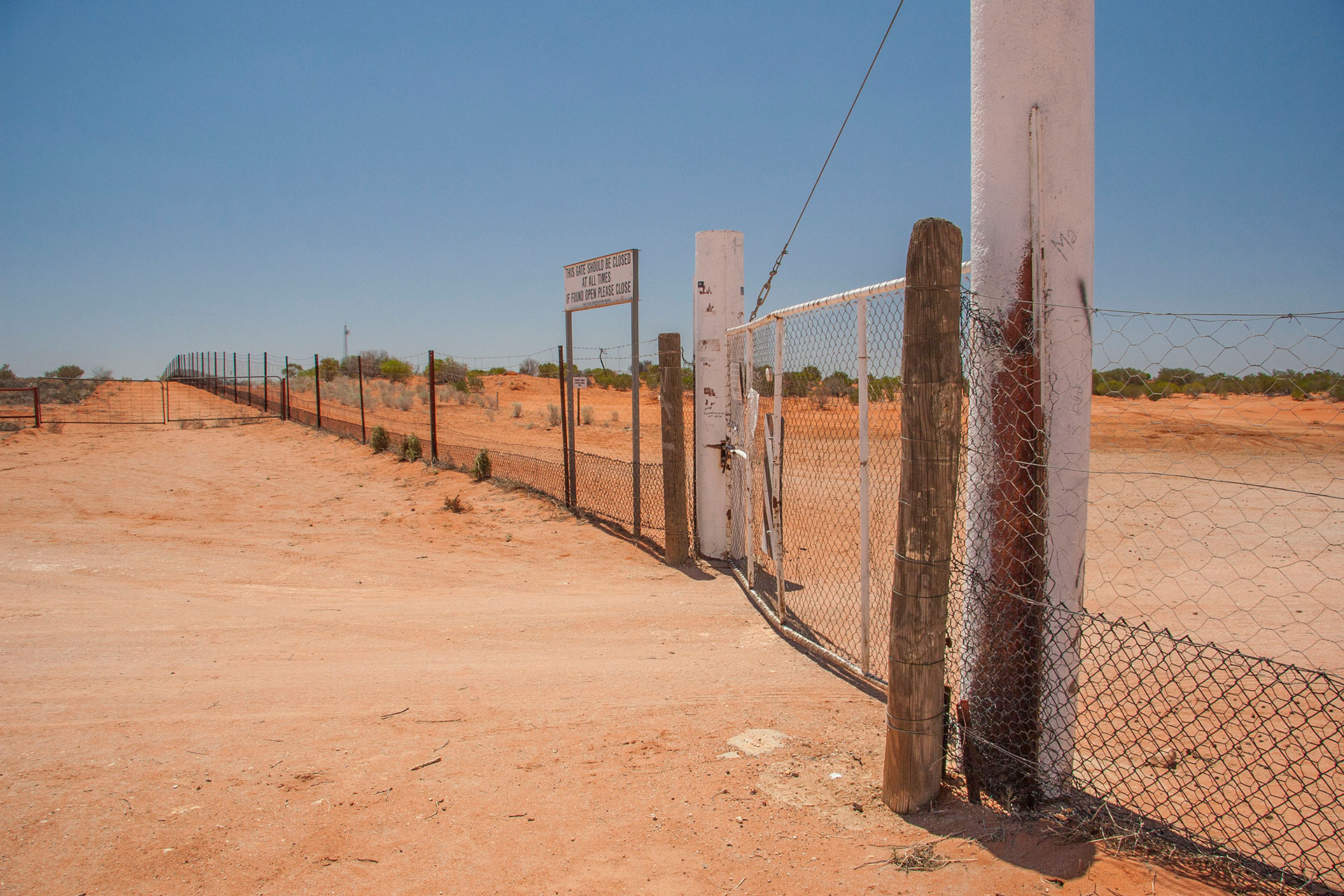 More of the Dog Fence.

I've reached a peculiar geographical point of interest here. This is Cameron Corner: a place where New South Wales, Queensland and South Australia meet, thanks to the ideal geometry of their borders. Walking around the plaque that marks the place, not only you can enjoy the benefits of rapidly changing legislations and postcodes, but you also can savour three different timezones at once (or two, depending on the state of the daylight saving). Apparently, this place is quite popular with tourists: there's a souvenir shop nearby, along with a service station and numerous signs begging people not to climb on top of the dingo fence. People are people, no matter where they are. 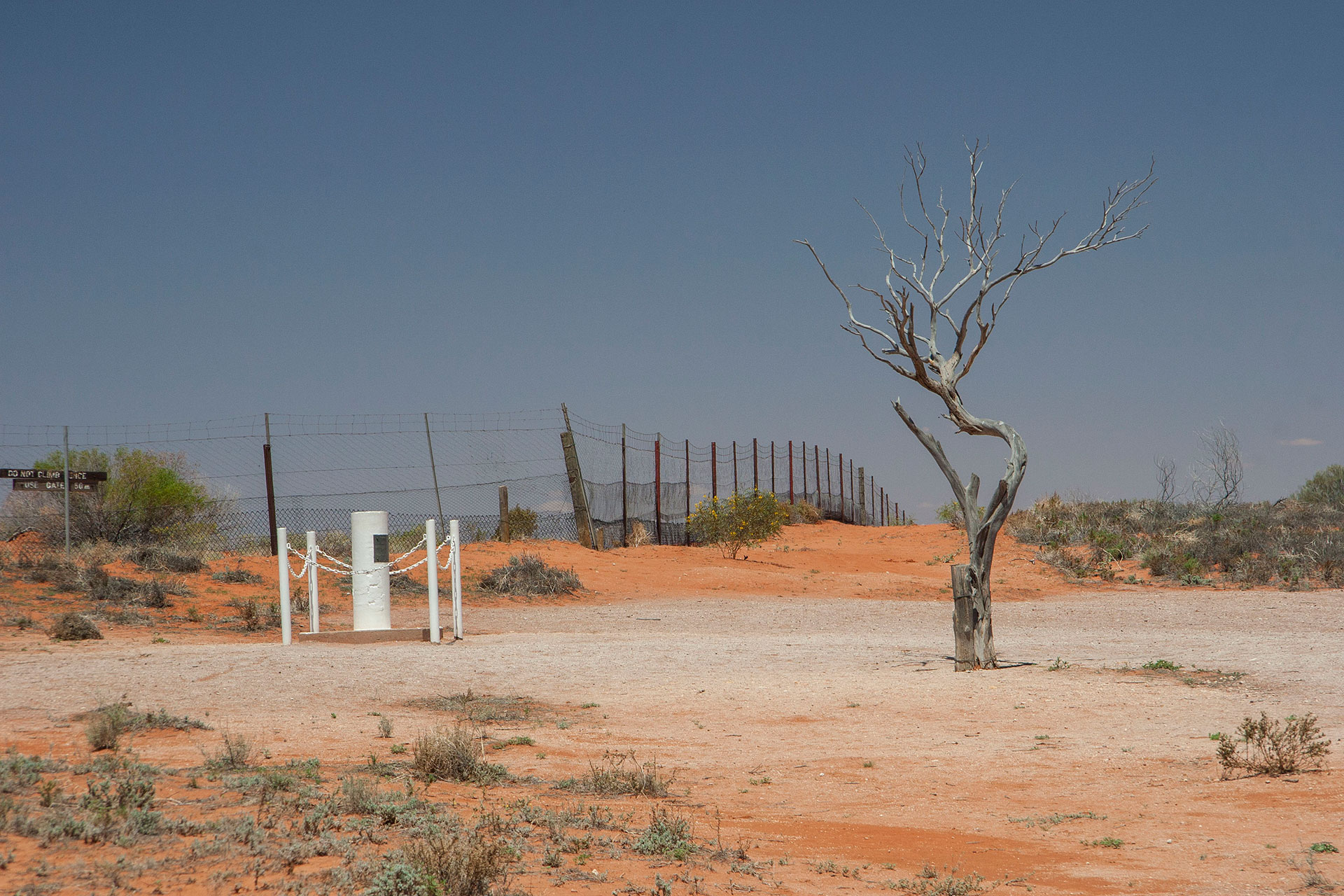 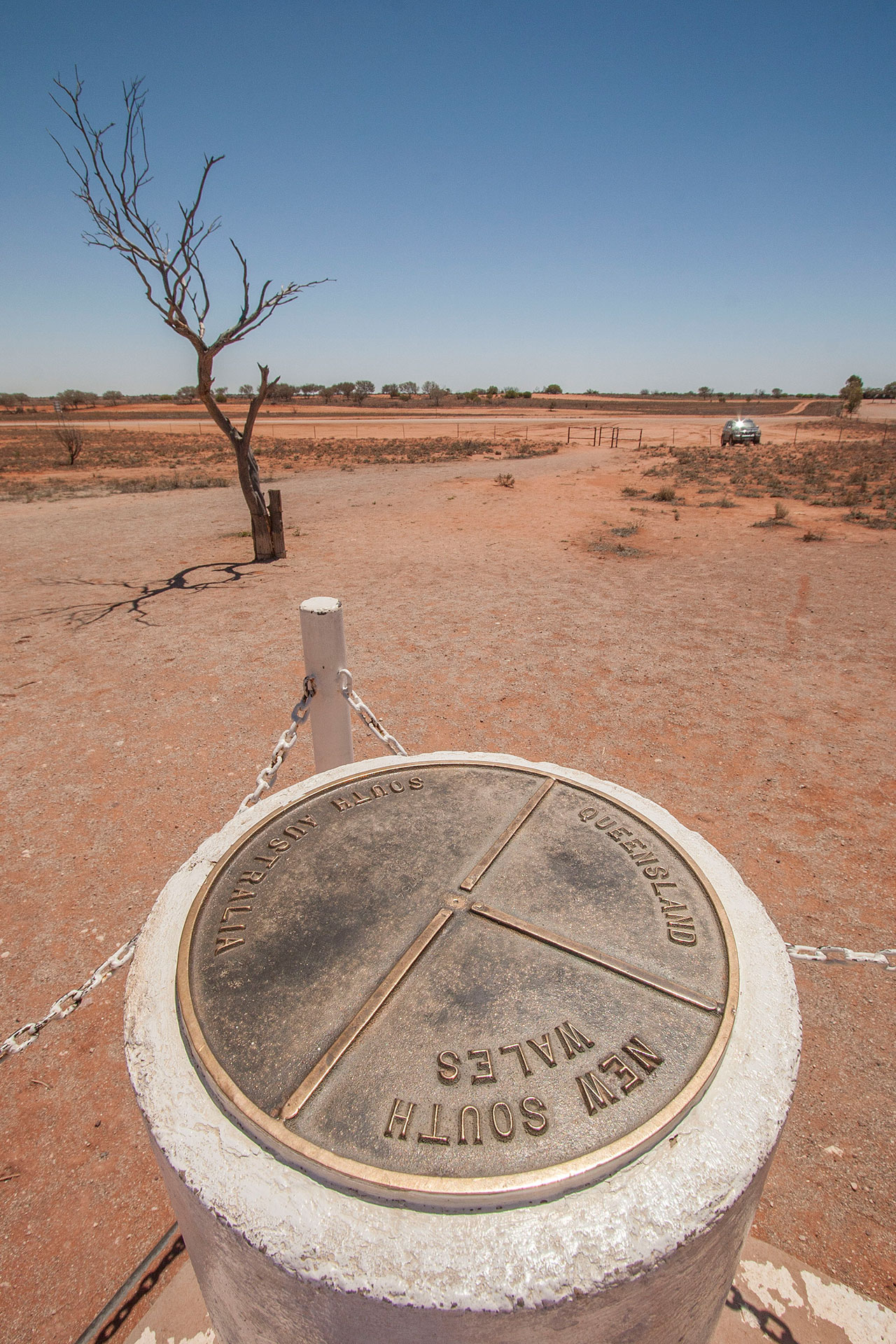 Where the three states meet.

Once I'm done with my ice cream (which is more than welcome right now, because it's 35°C already) I leave the Cameron Corner at precisely 1:00. This time I choose another road to return: marked as “4WD only”, it takes me along the northern edge of the park, giving me more interesting angles on the scenery. One of them is a surprise patch of yellow dunes: you hit them instantly, as if someone turns up the colour dial and red becomes yellow in a blink of an eye. It transforms back into red just as suddenly. Extremely selective rain patterns? 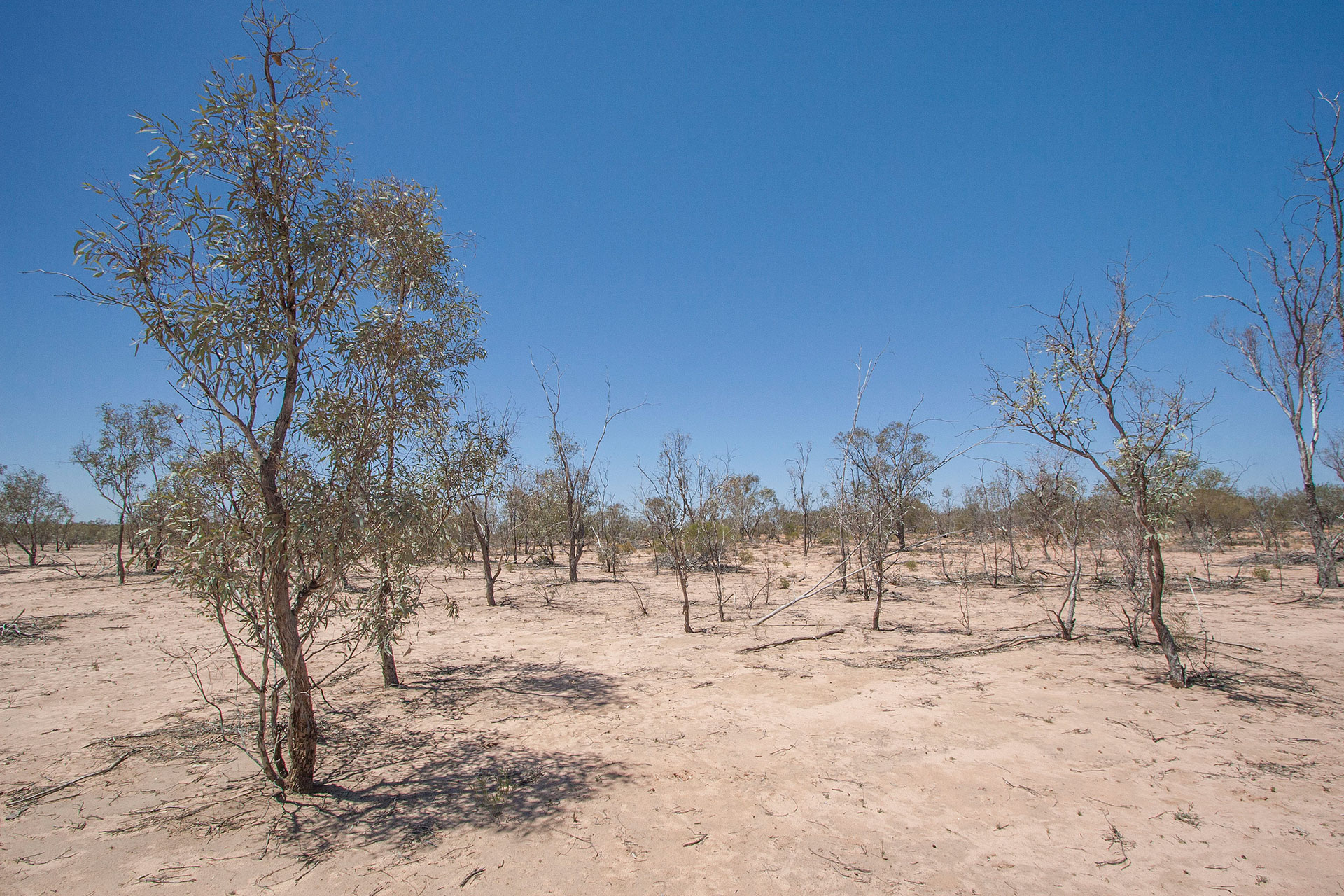 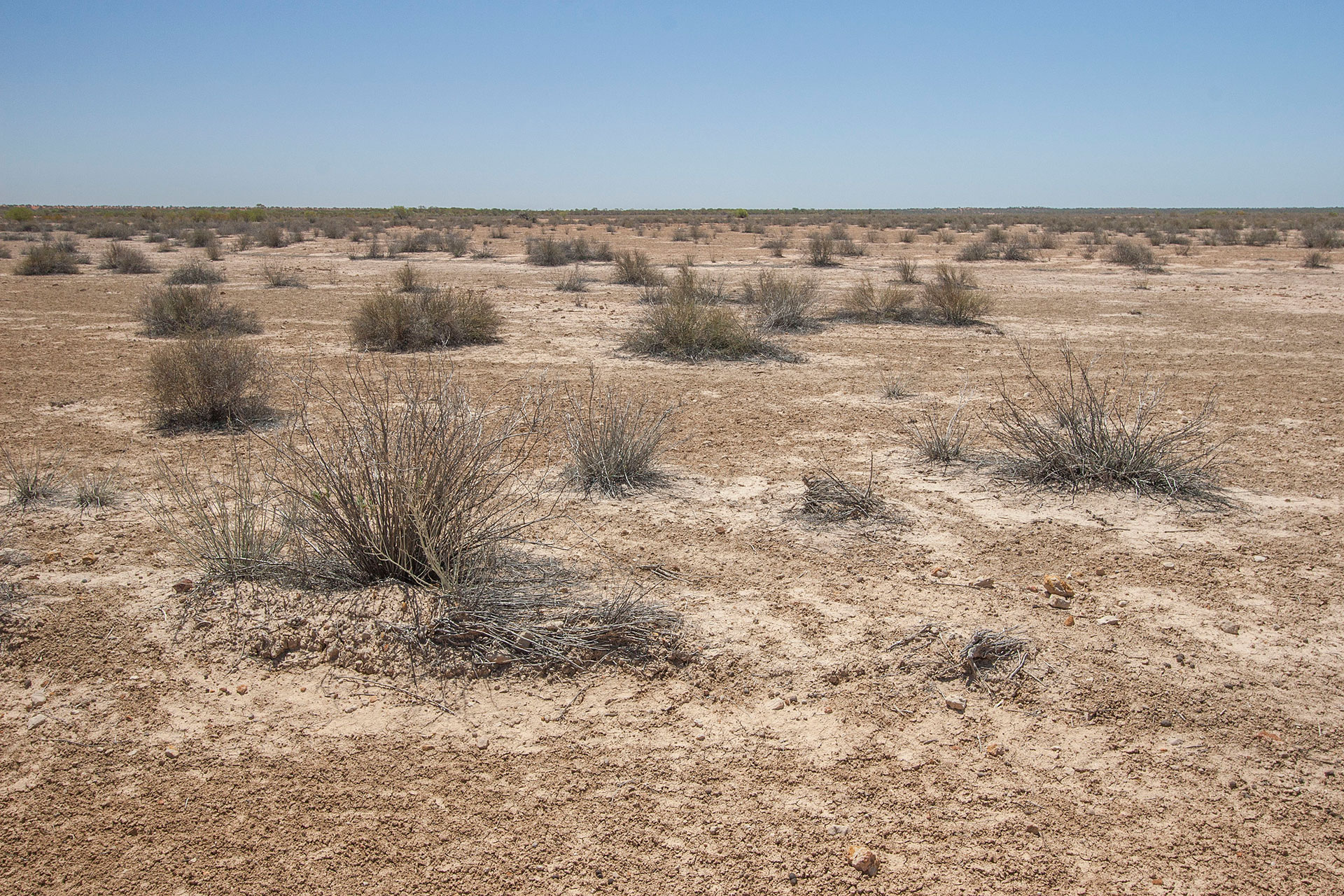 Treeless for the most part. 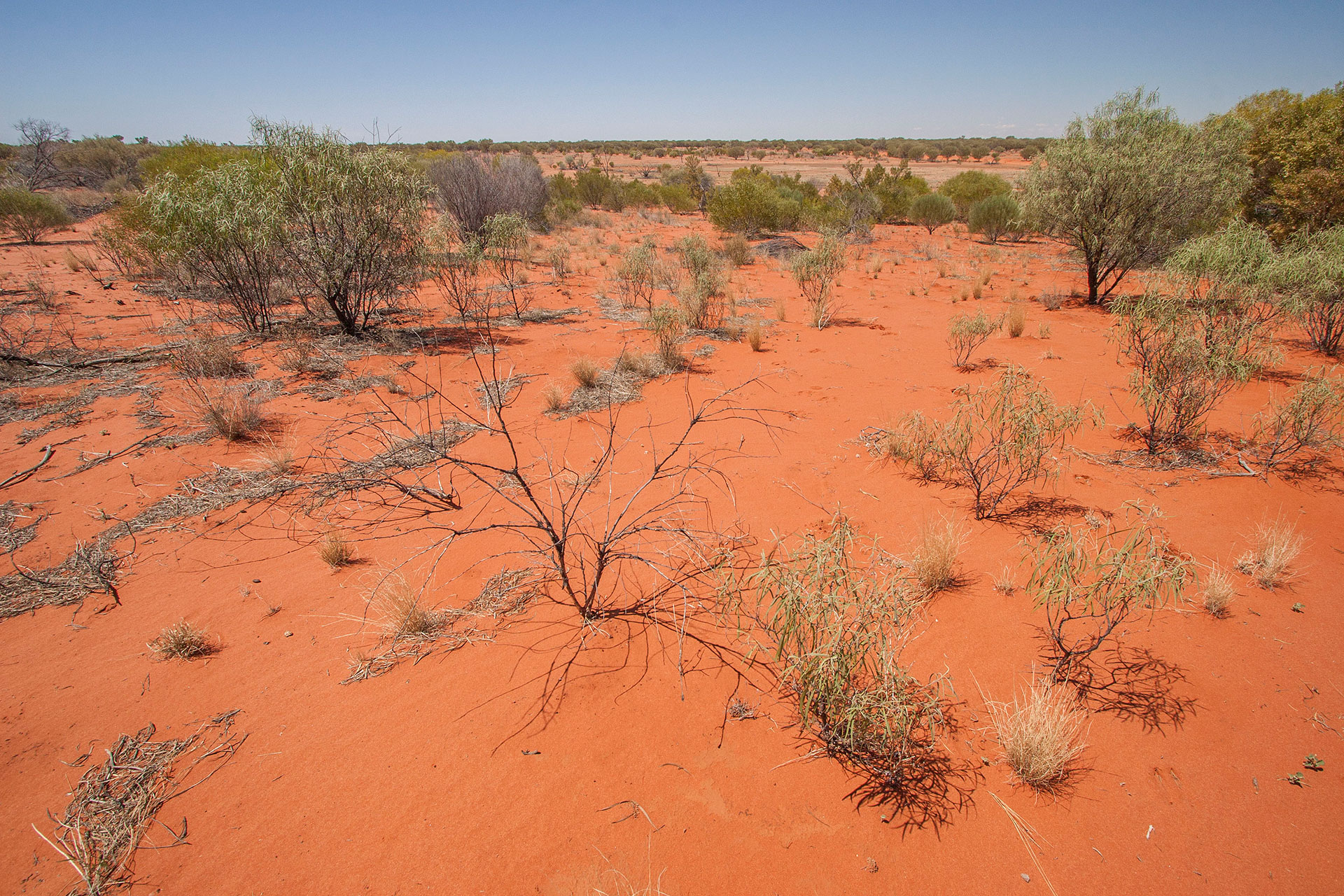 …and back to red again.

The Middle Road, as it's called, is slowly but surely taking me back out of the red dunes country into the gibber plains. The road isn't as bad as I thought it would be: I can easily do 60 or even 70 km/h there. Gotta watch those loose rocks though, not to mention emus and roos. Oddly enough, red desert seems to be full of emus and barely has any roos, but out on the stony plains it's the other way around. Must be some explanation for that.

Other thoughts that visit you while driving through those vast, undulating plains covered with loose rocks, is how old this place actually is, and what exactly made them this way. Were this gently rolling hills a towering mountain ridge once, and these rocks and pebbles is all that is left of it? Or was it a part of a rock deposit covered by sand, blown away gradually, and the sun and the wind did the rest? Either way, it must have taken millions of years, and all these cows and roads and tourists that cover these plains right now are no more than thin layer of dust that in a few million years will disappear just as easily without a trace. 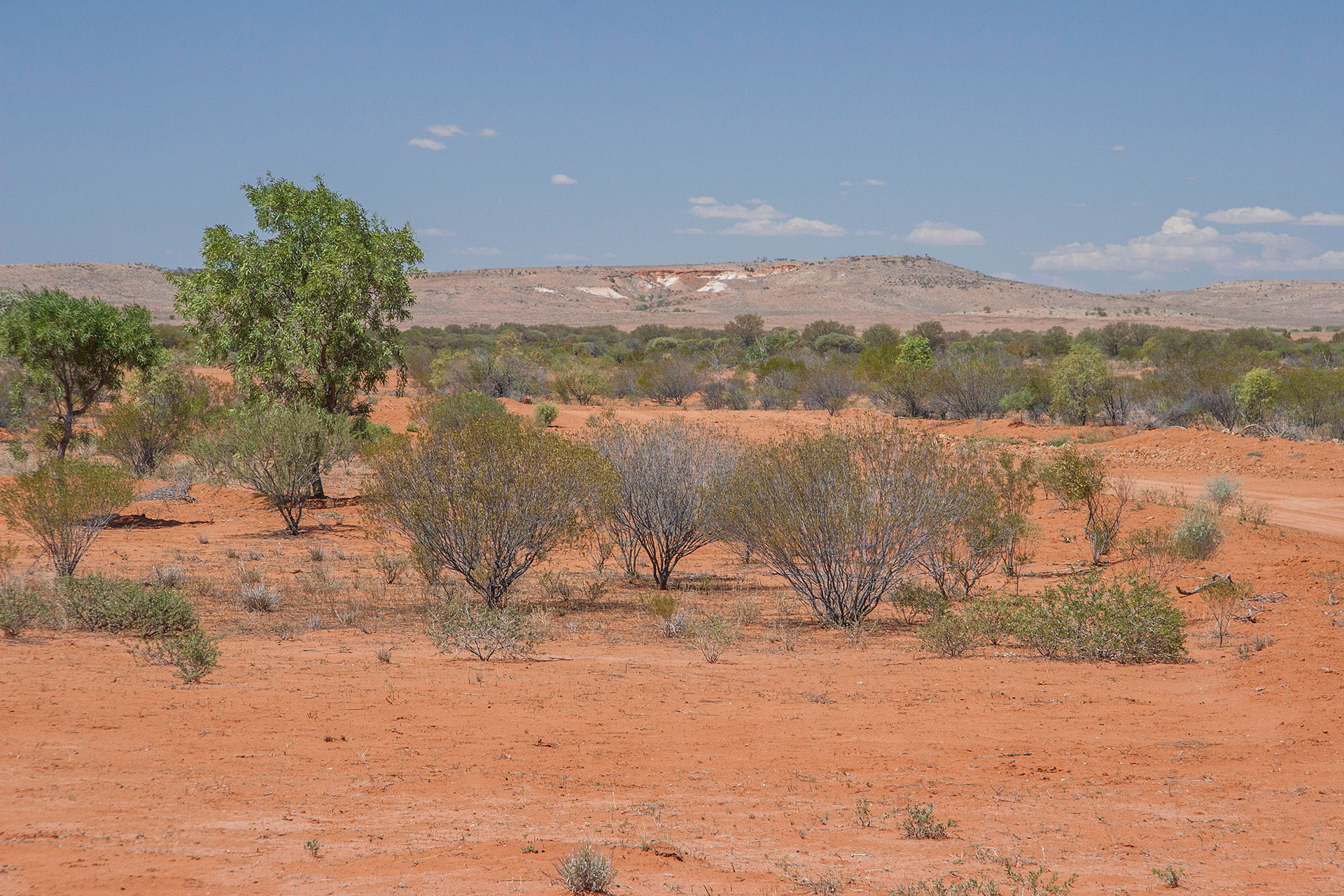 Red desert ends over there. 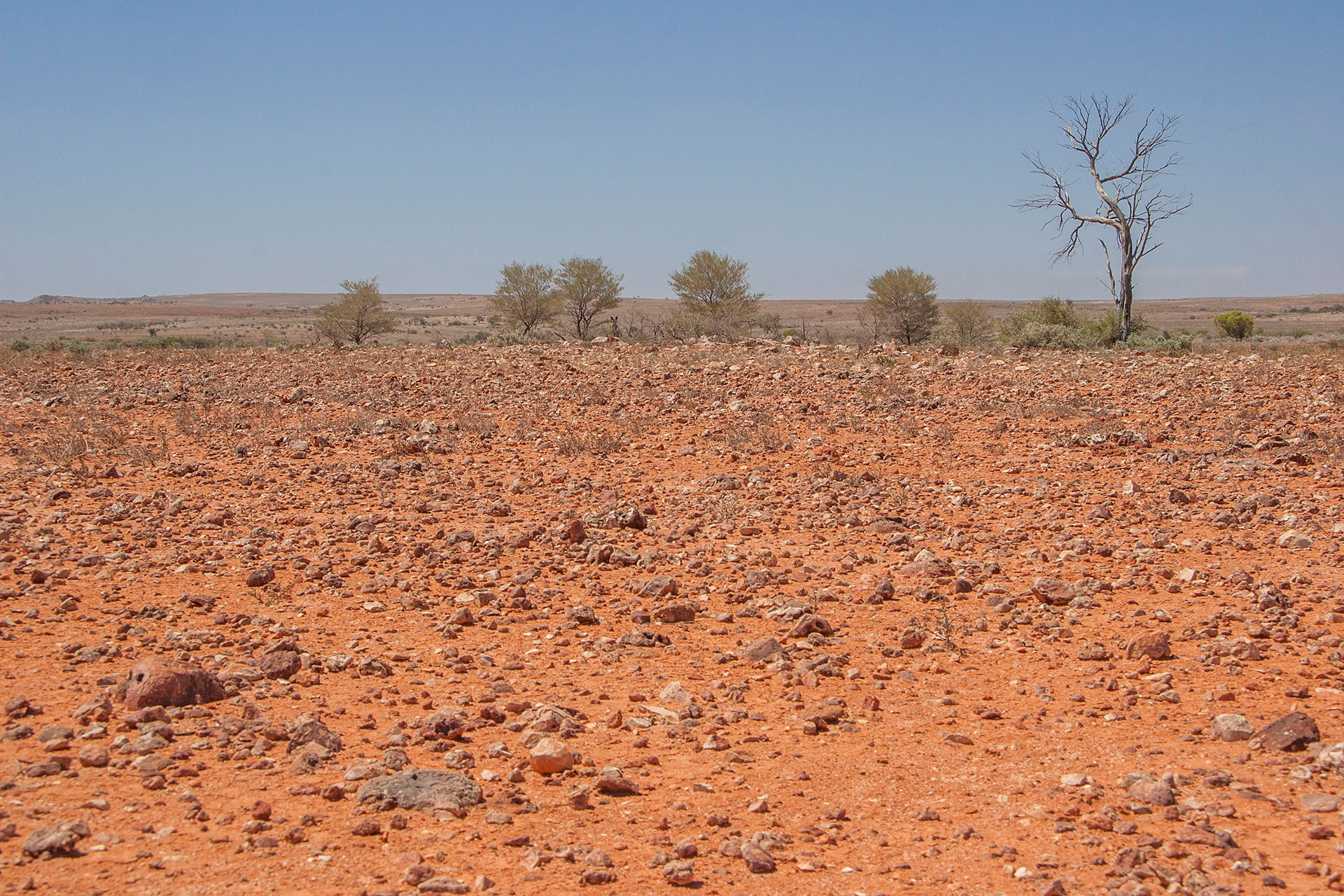 Back to stony plains country.

On the Jump-Up Lookout, at 3:25, I stop to grab a bite and take a good look at the surroundings, absorbing even more of this ancient vibe of millenia flowing by so effortlessly. It's so quiet here. Not a single person around for miles, probably. Nothing but wind and sun and ancient rocks covered in tinder-dry scrub. As Australian as it gets. 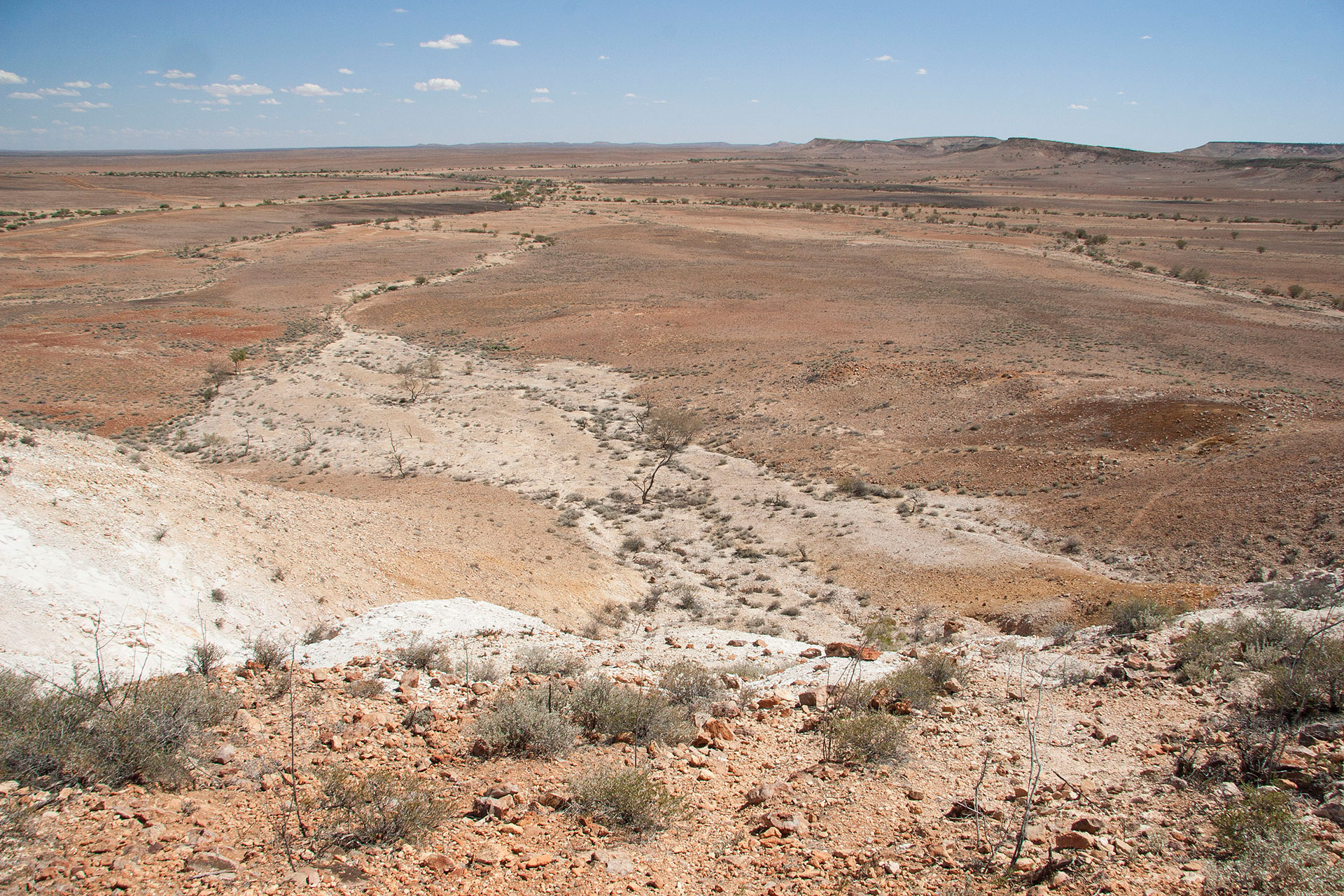 A view from the lookout. 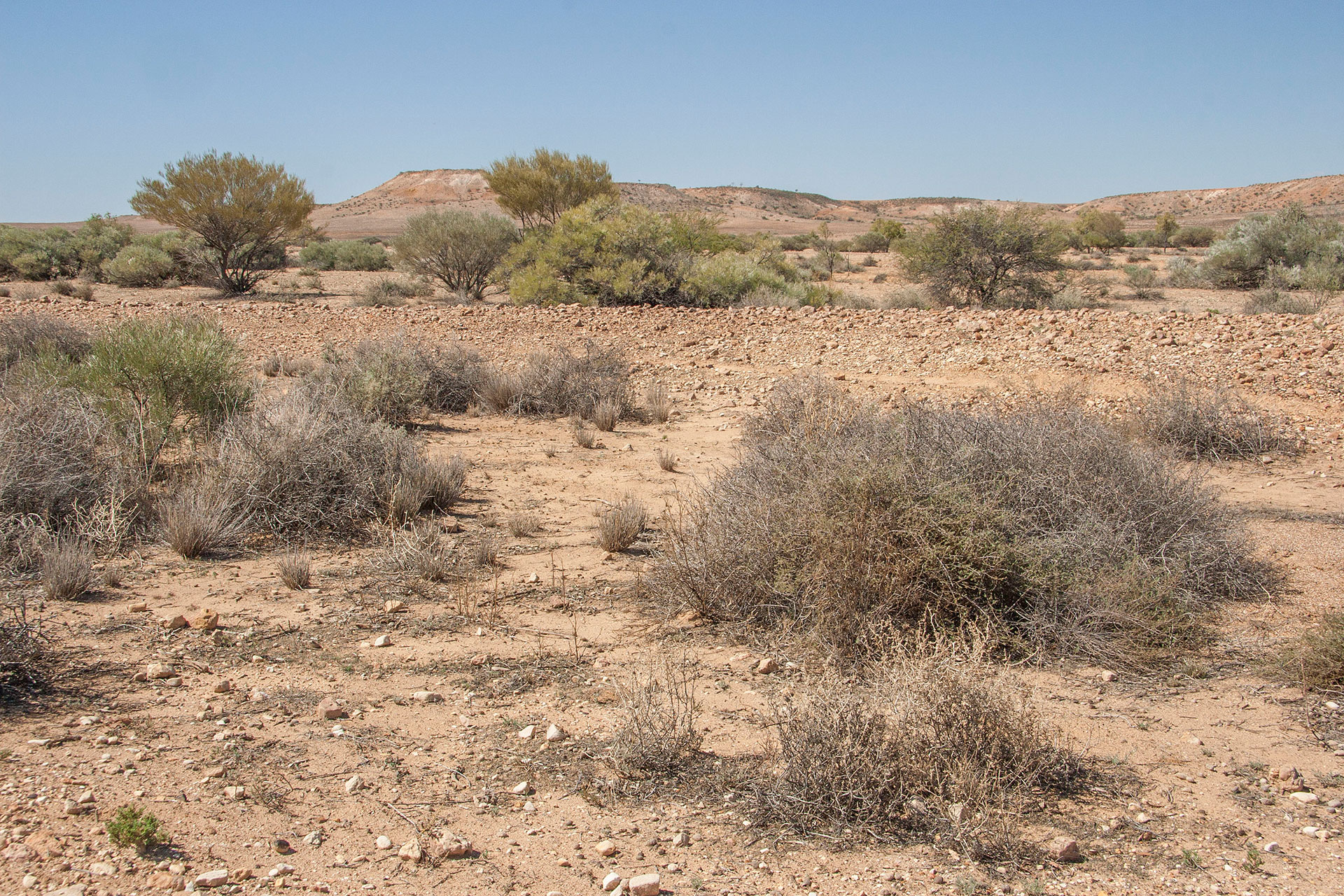 The jump-ups from below.

Time to leave the park, though. It's well past midday, and I still have to find a place to camp for tonight. I wanted to visit the eastern half of the park as well, but on a second thought I decide to leave something for later and hit the road south. Back in Tibooburra, I re-inflate my tyres: even though there's going to be a few dirt patches along the way, it's time to get used to bitumen again.

The Silver City Highway leads me steadily down south. For a road so romantically named, there's nothing much to see on either side of it: just more of the same ochre plains, with arid scrub at the front and rolling hills in the back. 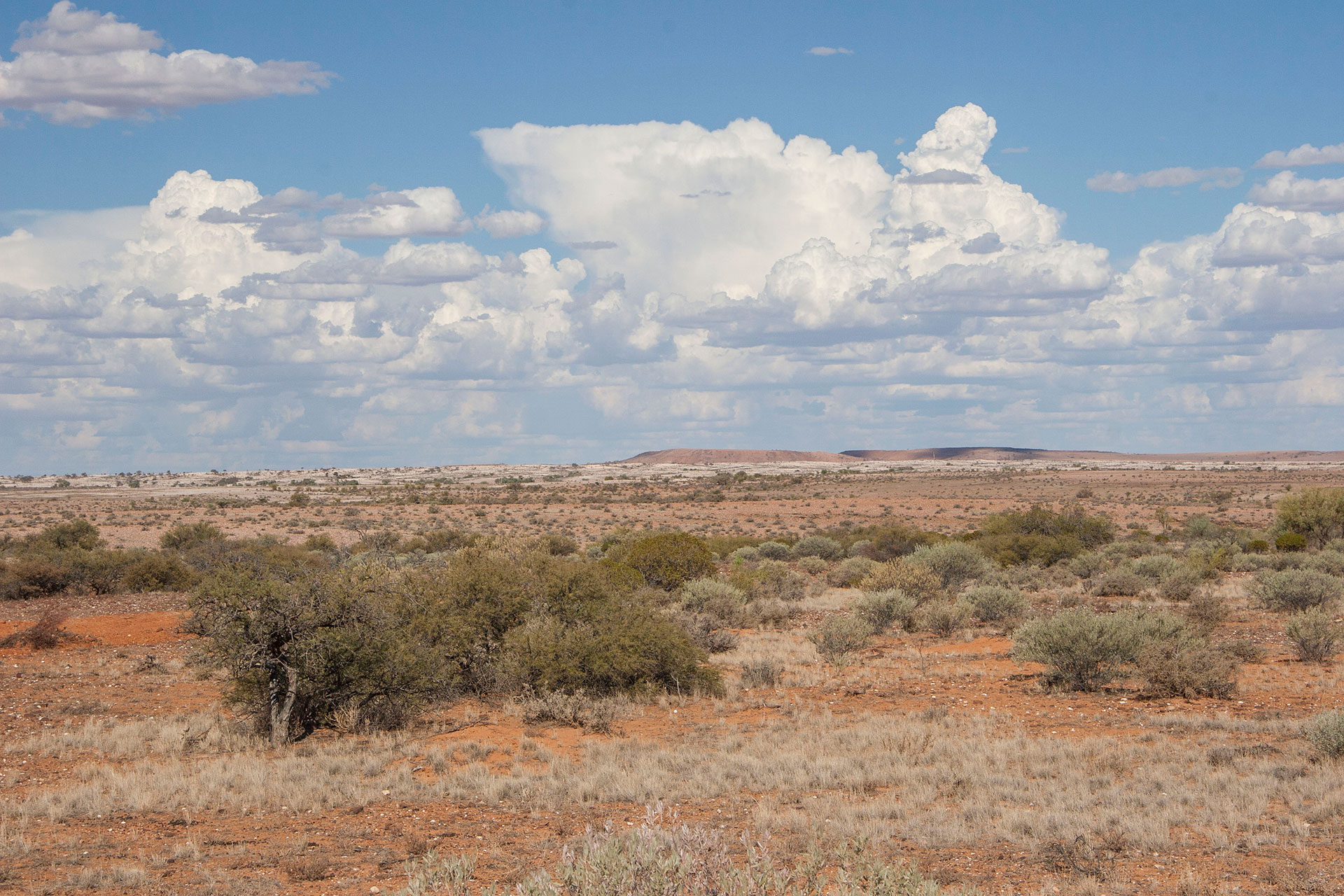 Along the Silver City Highway.

I have troubles with locating the camping spot that I've chosen for today: either someone did a bad job in placing the GPS marker, or it simply doesn't exist anymore. I drive 100 km's further south to the Packsaddle roadhouse, where they have a 24 hour rest stop. Not a very picturesque place, and not too comfortable either, but I'm not going to get anything better tonight. In addition to that, it's so windy that I have serious troubles with pitching up my tent. Luckily, the wind subsides after dusk. 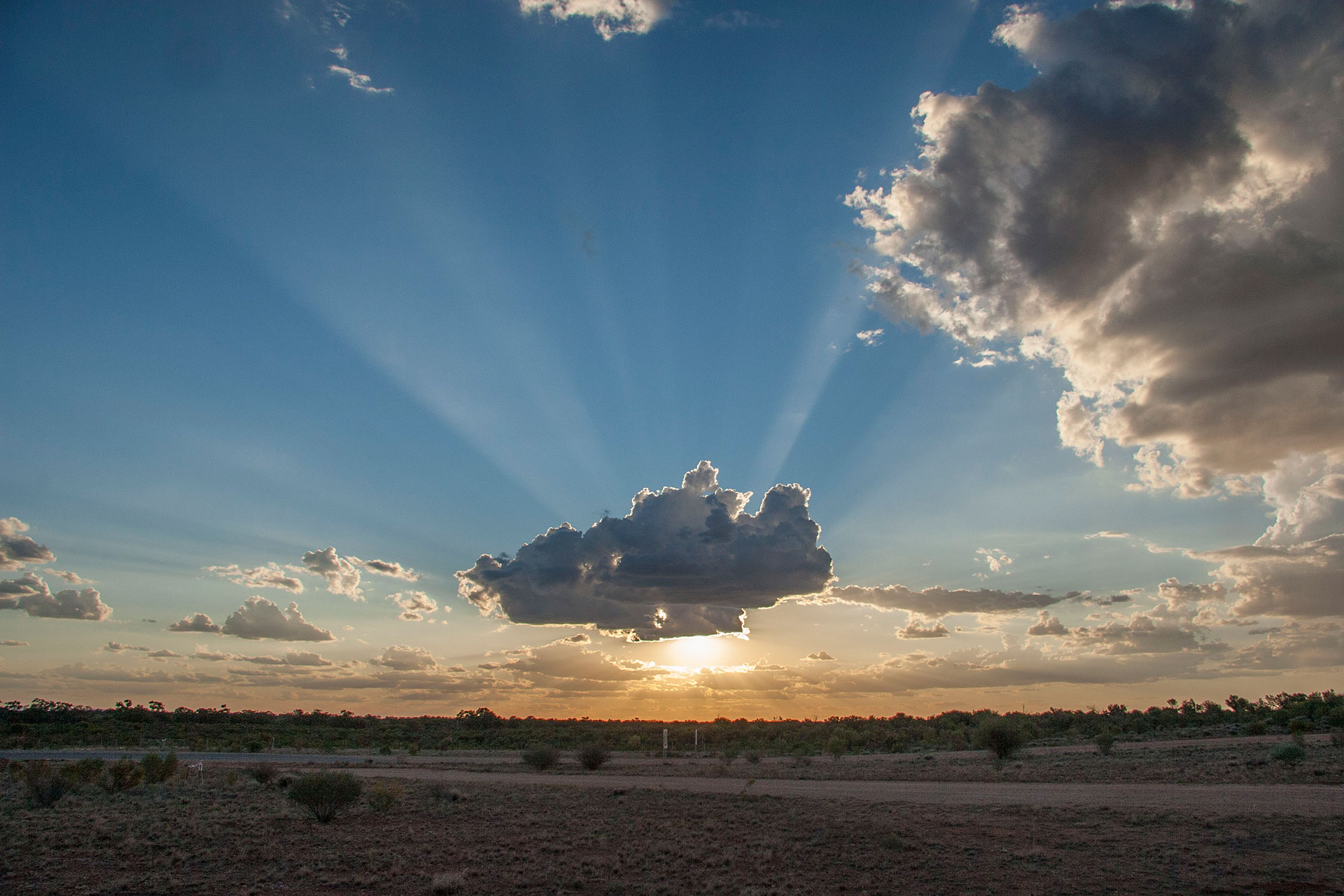 Nothing like a nice set of clouds for a good sunset. 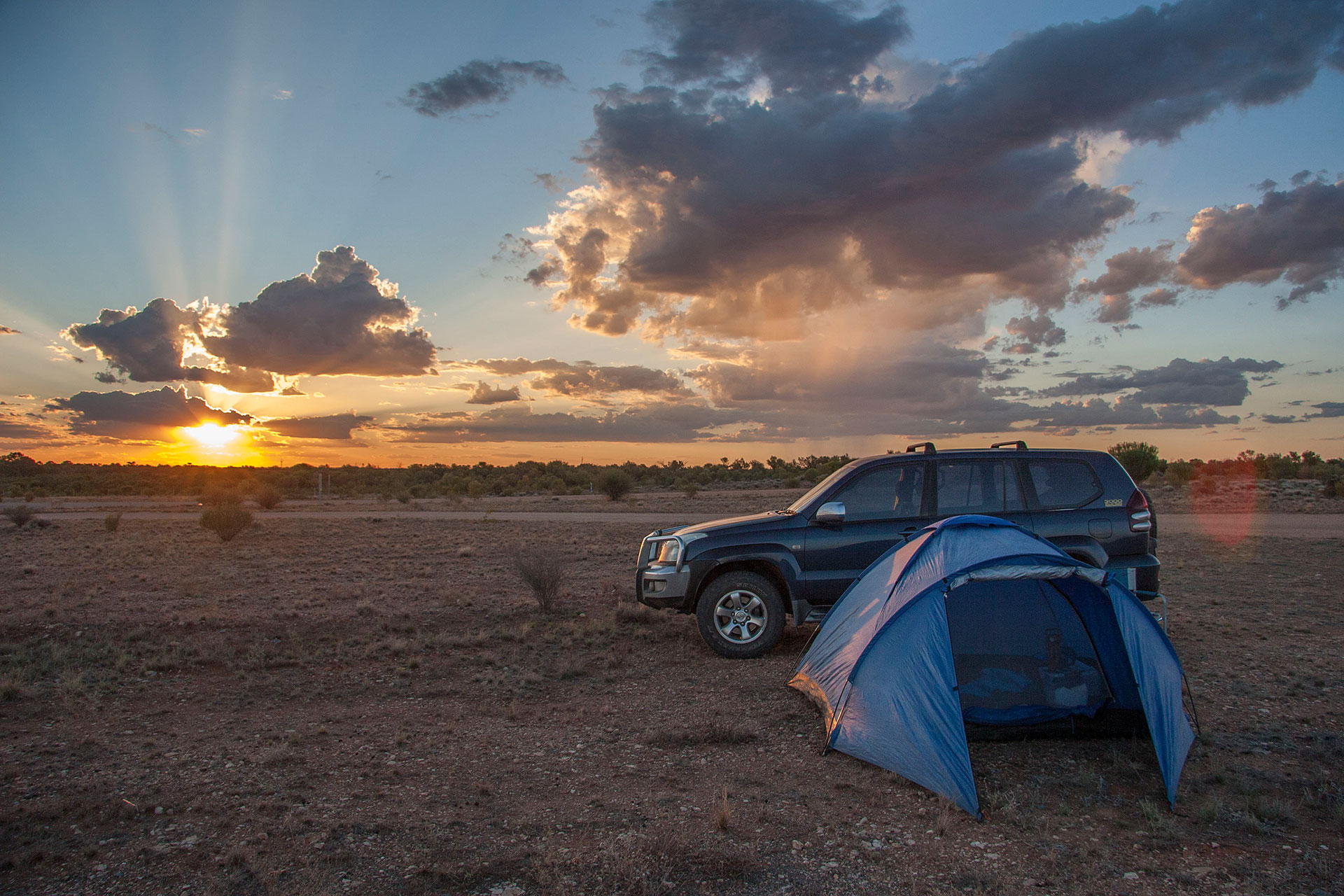