A Trip to Pilbara: Due North 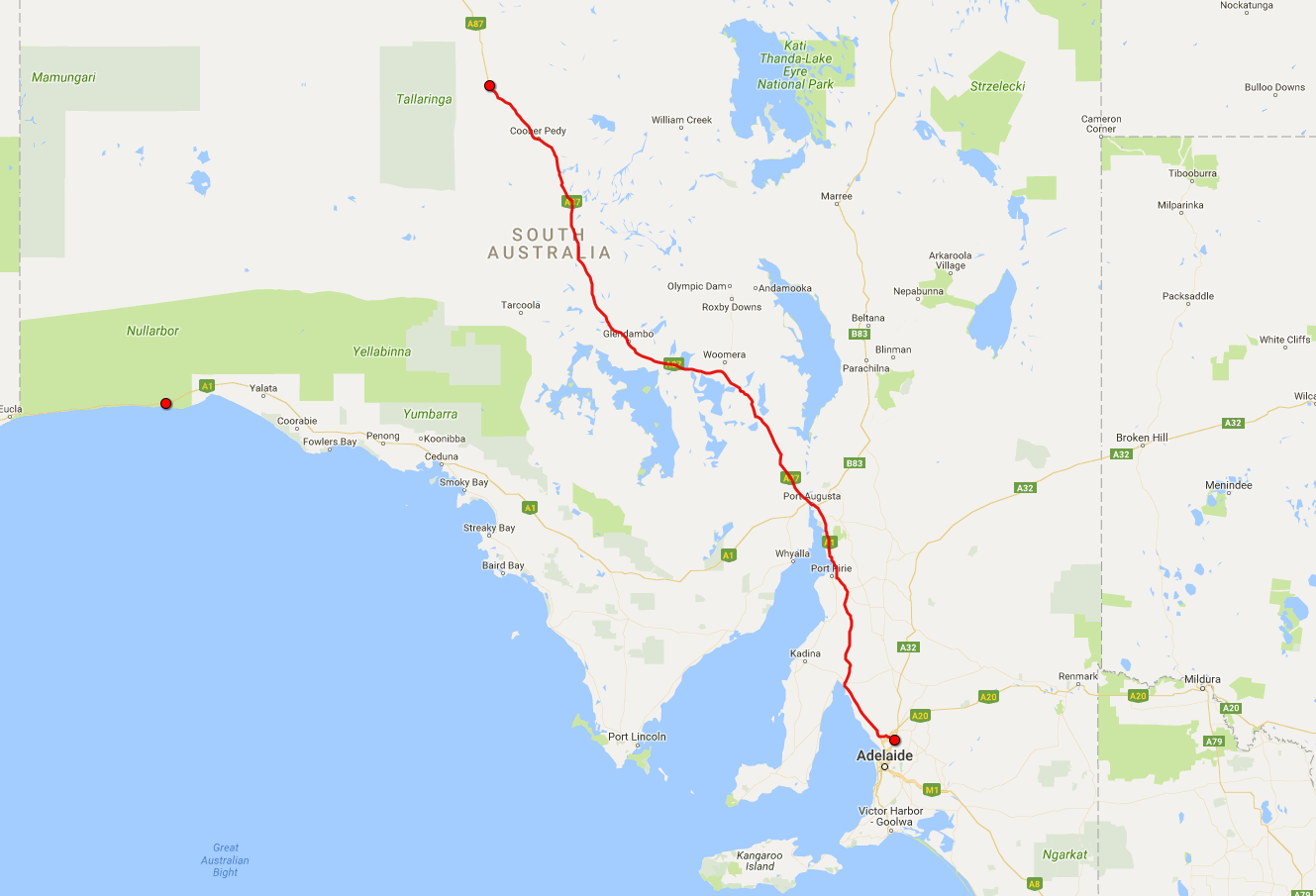 May in Australia is like November in the Northern Hemisphere, but milder. Australian winter, however, is already at hand, so in our temperate South Australian latitudes it can get quite chilly during the night. Still, the sun gets up rapidly and warms up the inside of the vehicle very quickly.

Just outside of Adelaide I pause to photograph a few quirky roadside sculptures; was going to do that for a while. This kind of craftsmanship is not exactly widespread, but not uncommon either in the countryside. 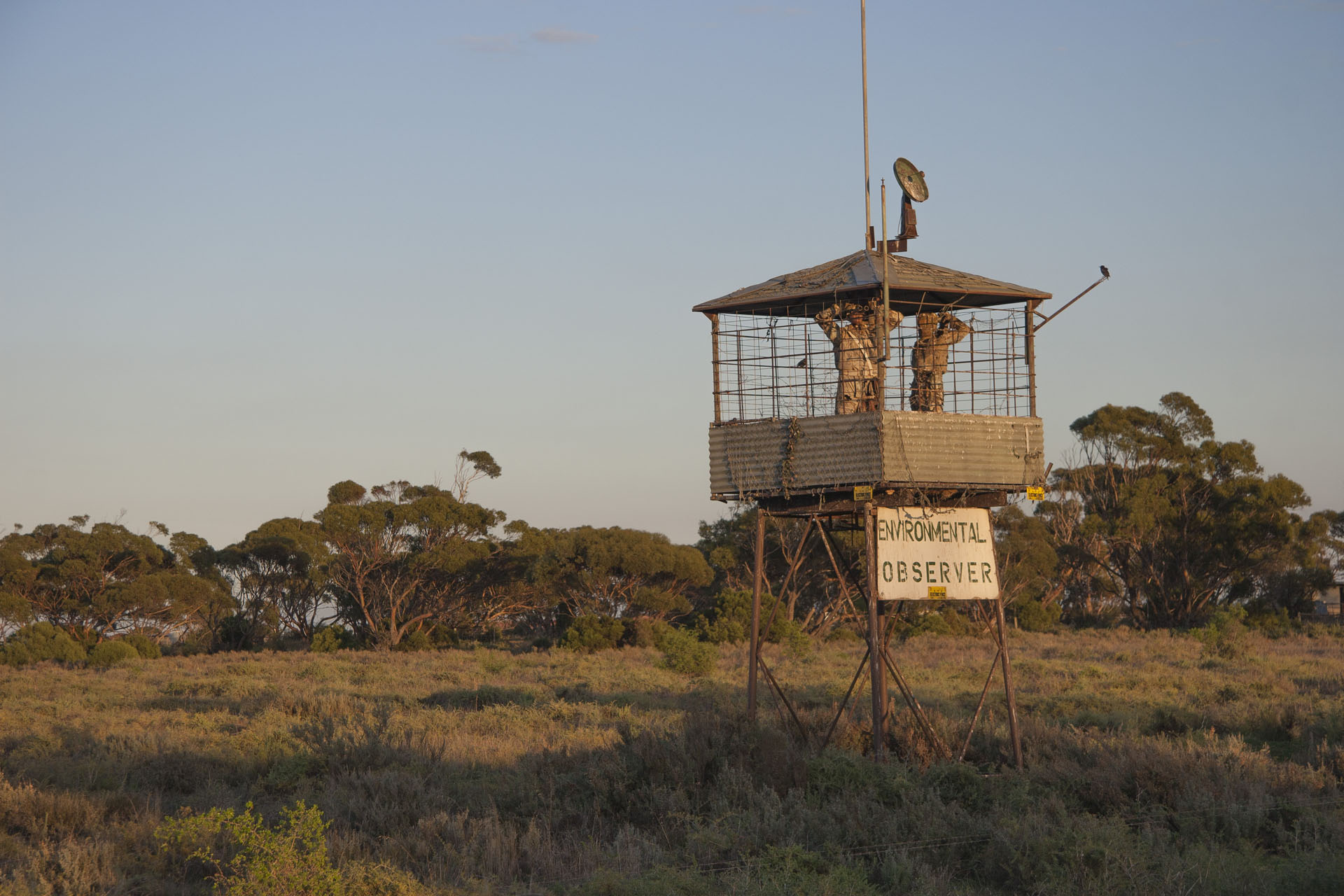 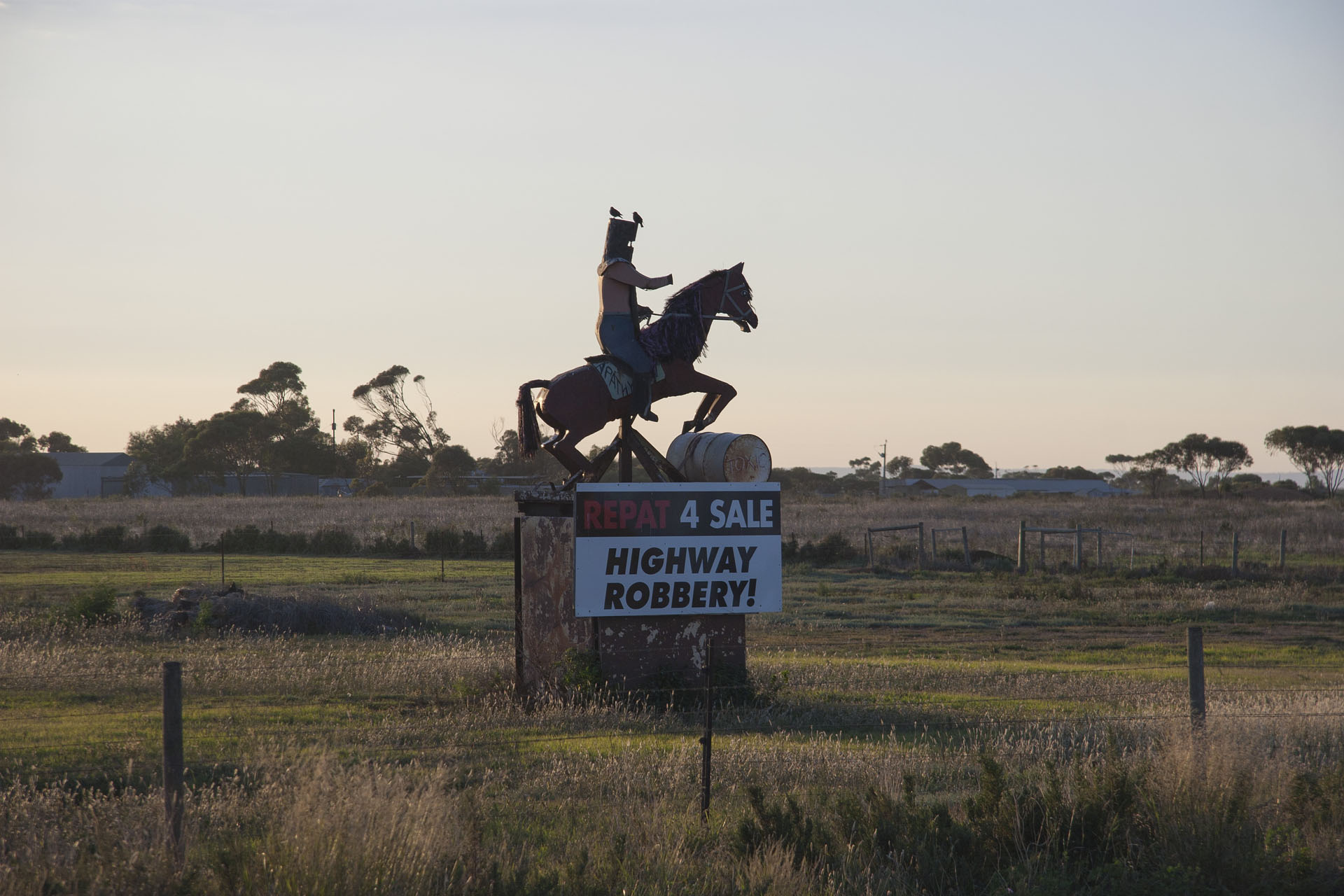 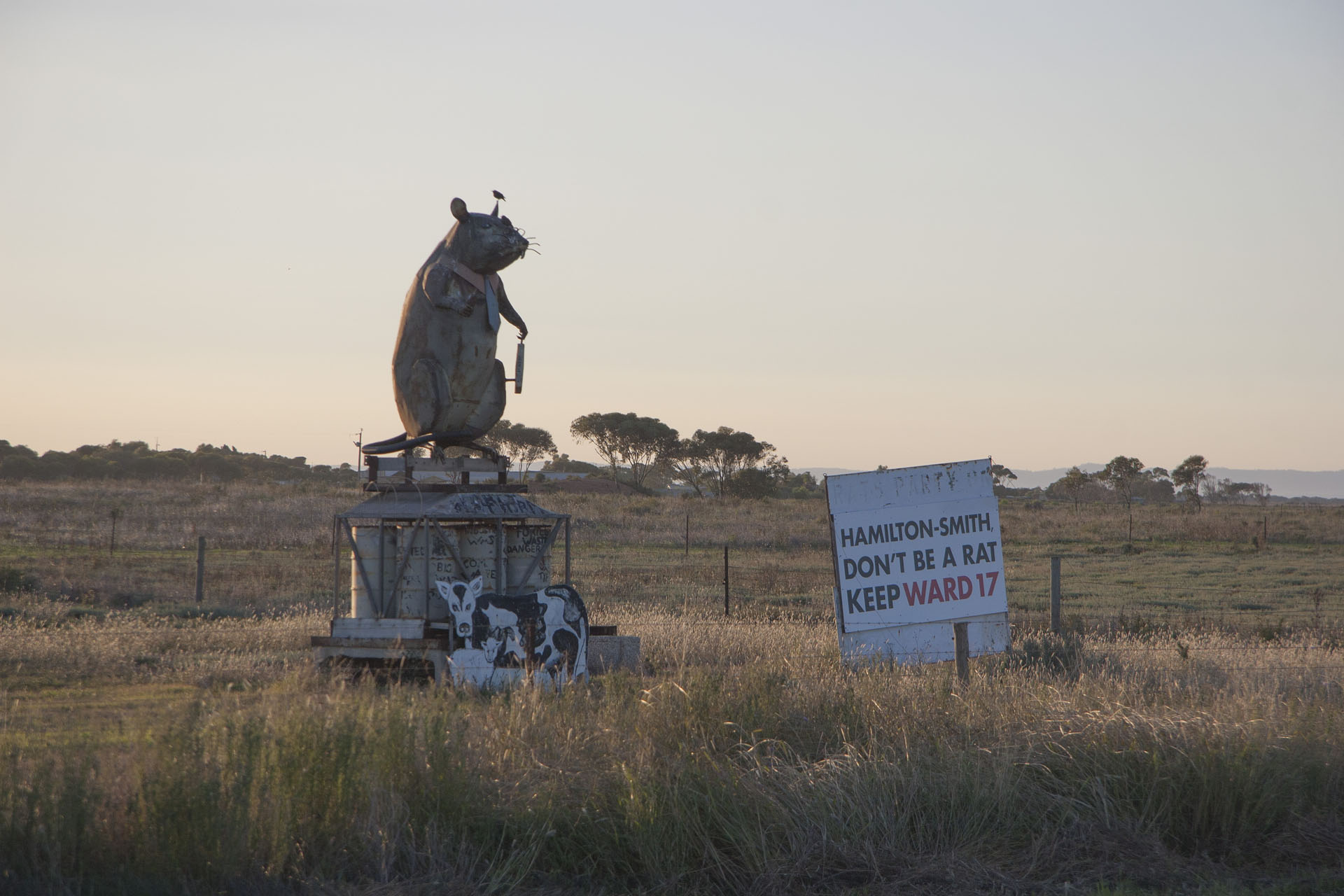 Because Hamilton-Smith cares so much about the roadside slogans. 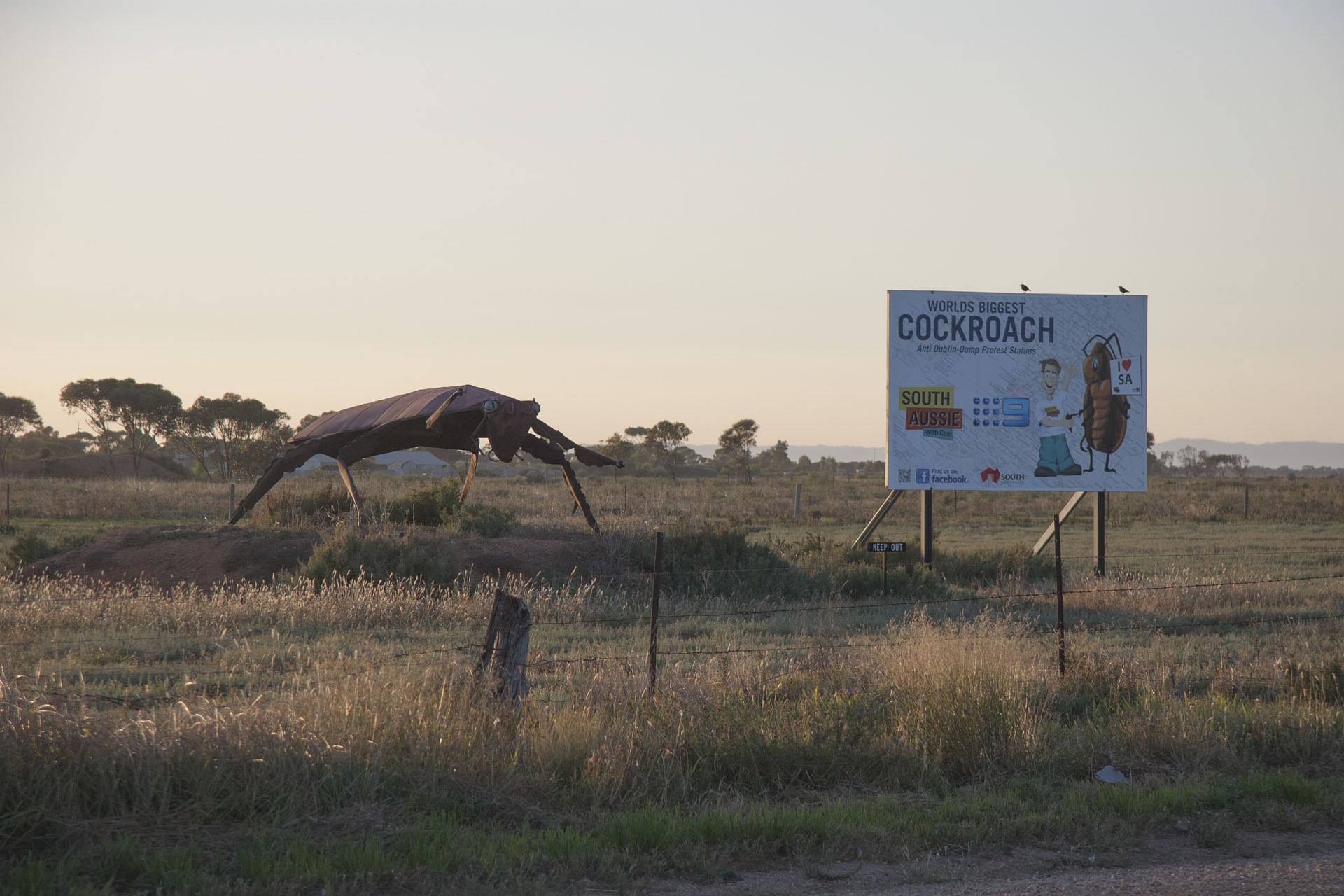 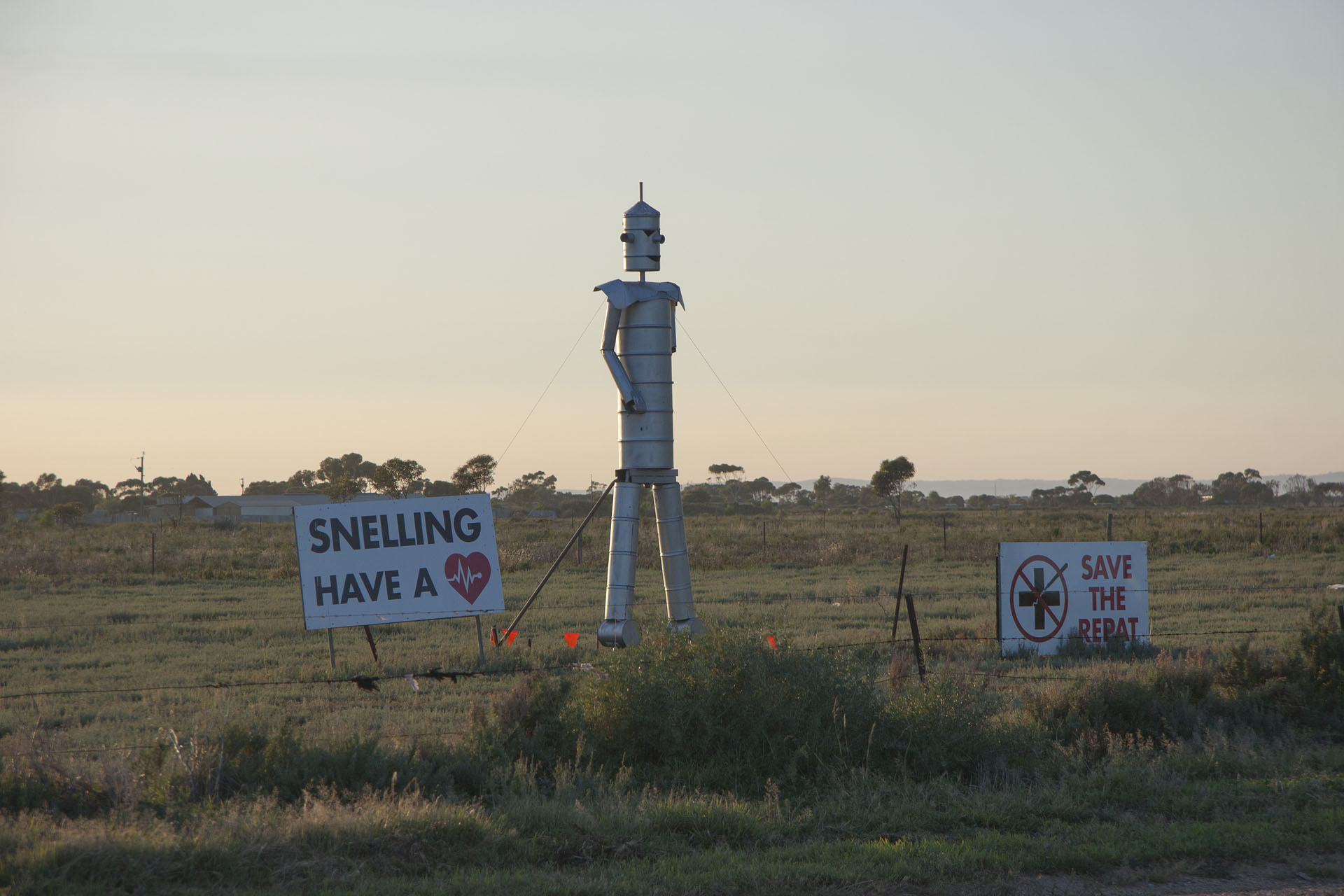 Snelling is the Health Minister of SA. 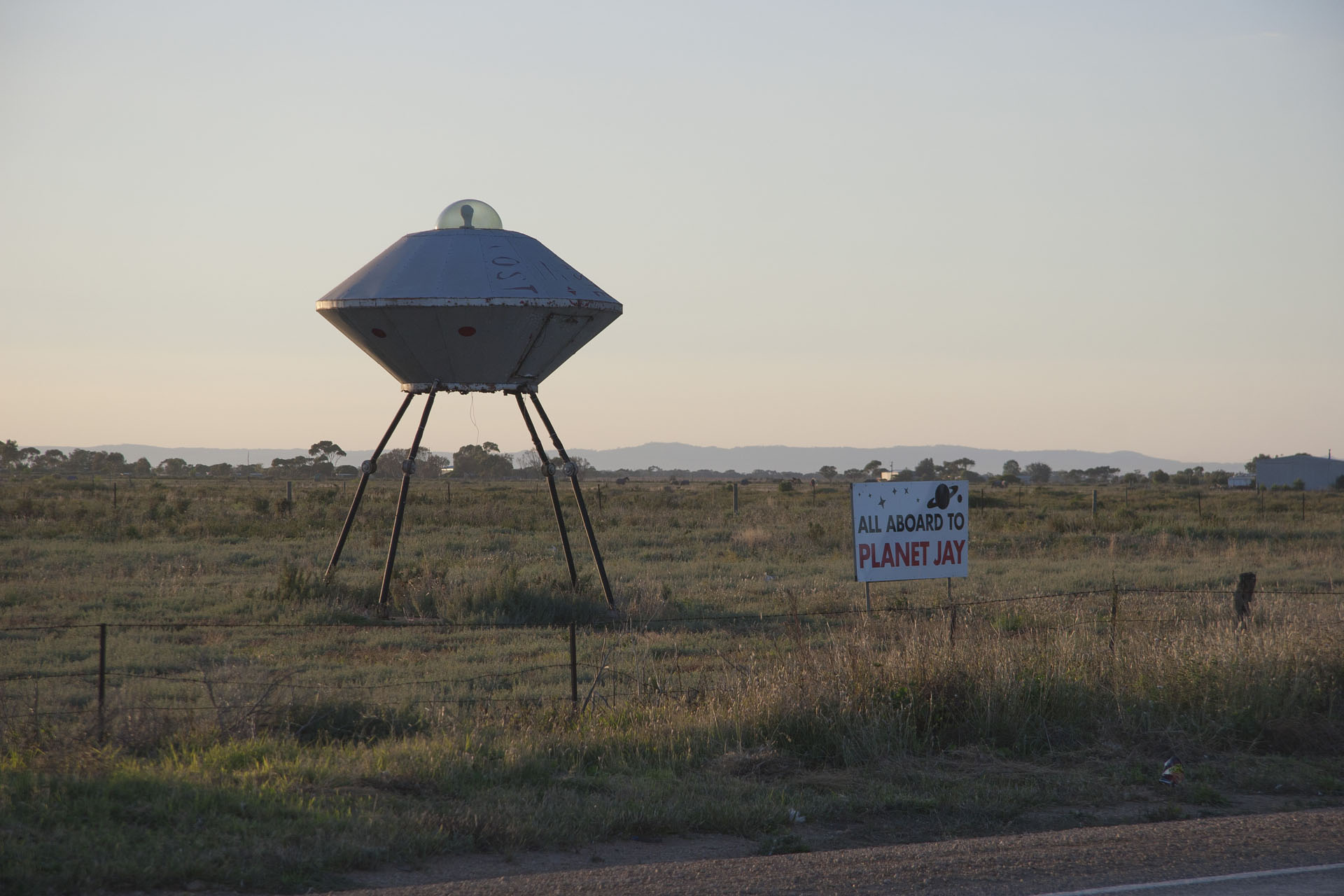 Jay must be Jay Weatherill, the State Premier.

Having had my share of the political fury of the author (I think these slogans change from time to time, but I can't be sure), I drive on. Flinders Ranges begin to slowly loom up on the right hand side. The roadside itself is covered in scrub and even some wild watermelons (reportedly poisonous). 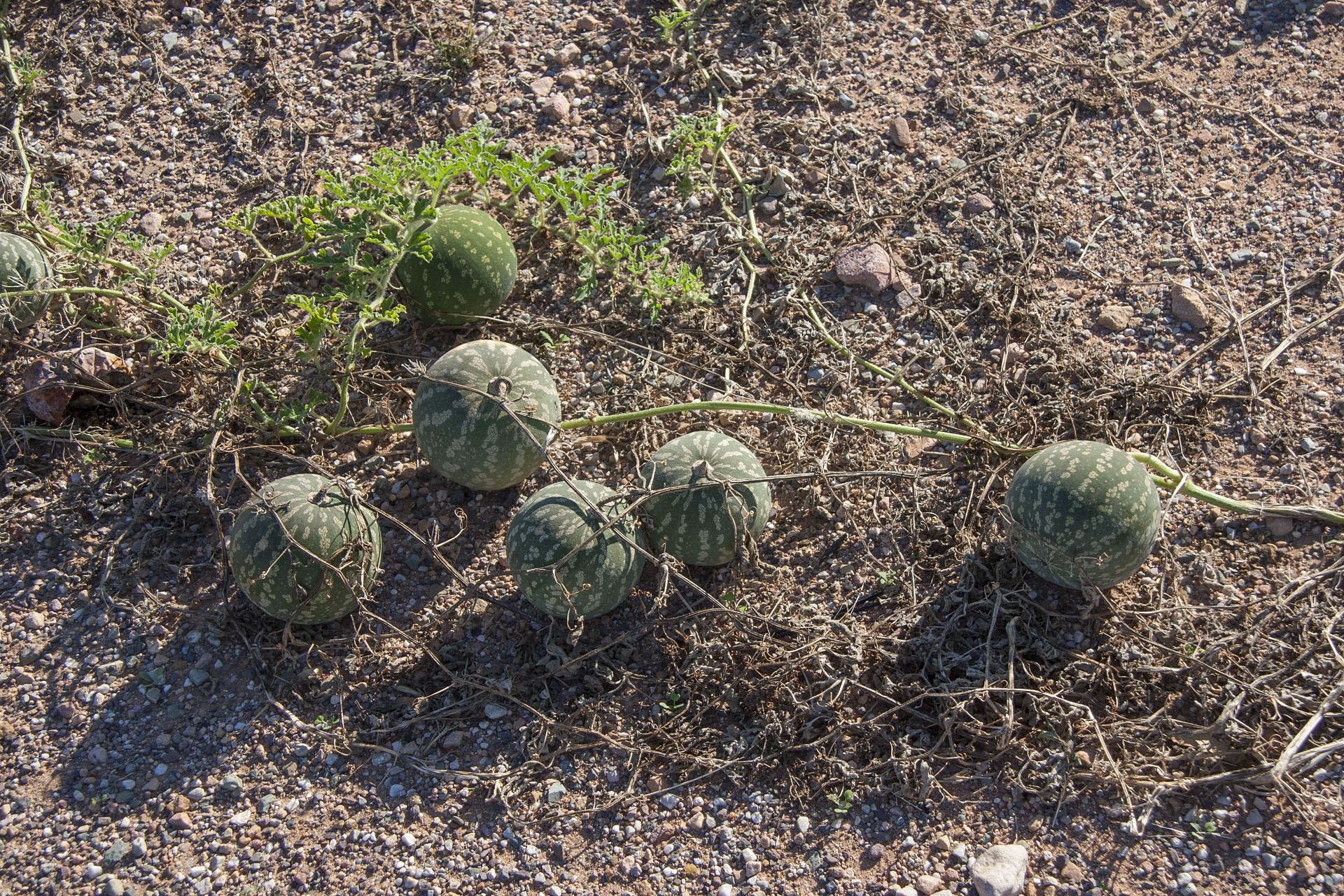 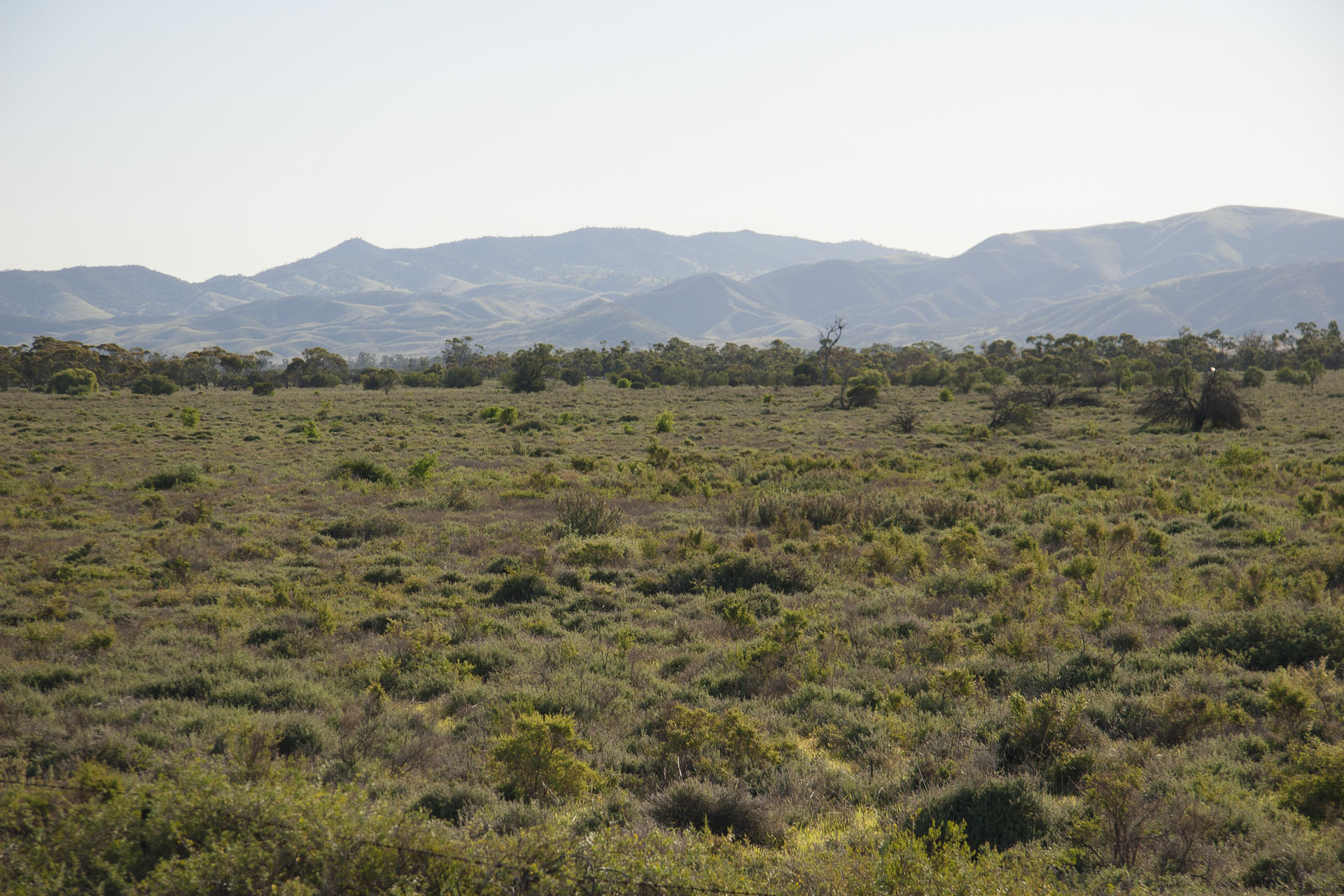 I make a stop in Port Augusta to grab a bite at the local KFC. At 10 in the morning, I am the only patron. Once the chicken is eaten, I head off and take the right turn on the Stuart Highway. I haven't been here before. The highway goes on and on up north until it reaches Darwin, but I don't have plans to go there just yet. 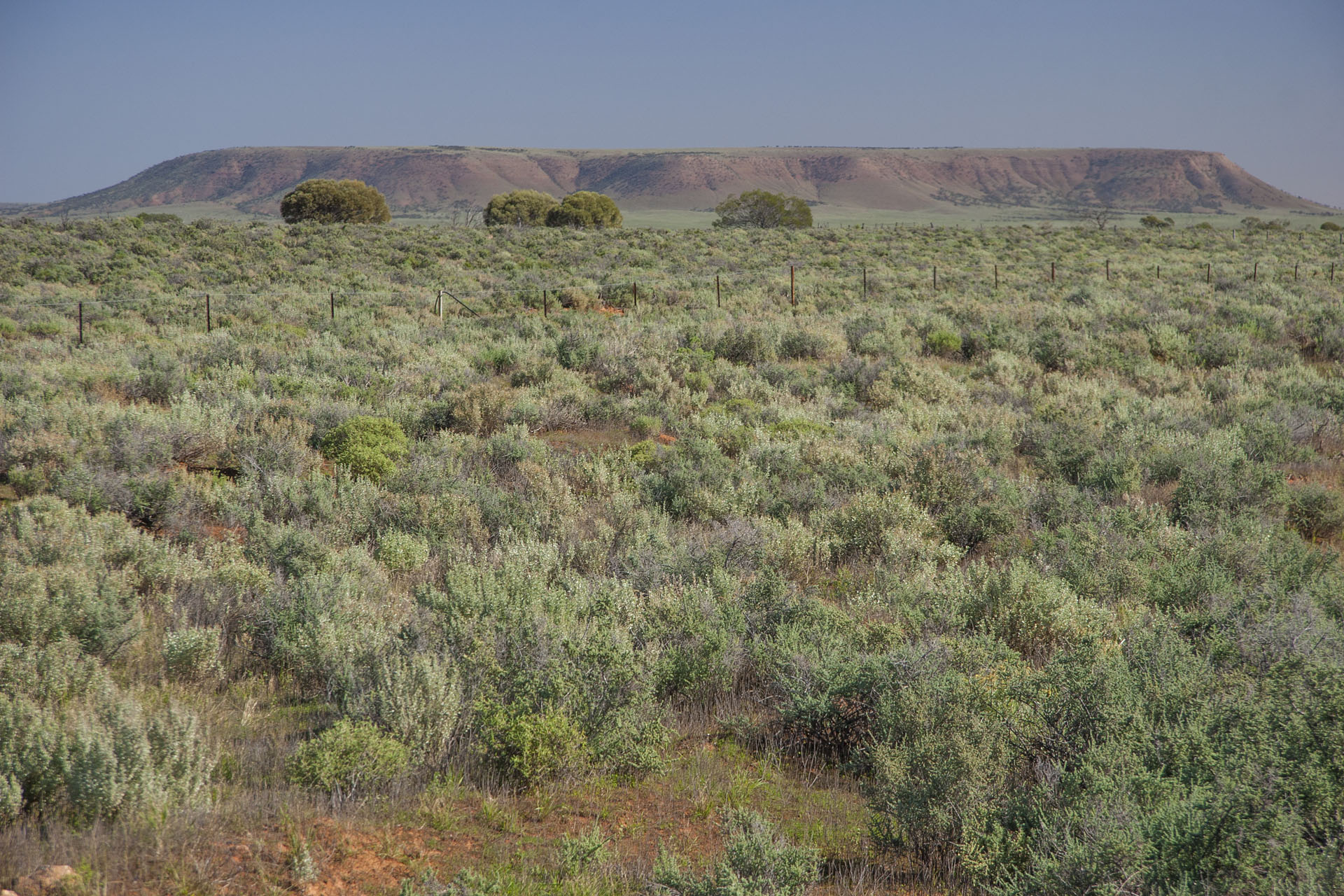 As soon as Port Augusta is behind, cattle grids begin to appear on the road. They're there to mark the property borders, so as not to let John's cattle make its way to the Jack's side. Apparently, cows and sheep can't cross these railings, and it's way handier to use those rather than proper gates, especially on an interstate highway.

Some might ask me here, though: weren't there any cattle grids before Port Augusta, 300 km north from Adelaide? Nope. Once I've reached Port Augusta, I've crossed the so-called Goyder Line: an invisible border that separates regions with reliable rainfall from those that are more arid. South of the line, you can grow crops; north of it, no chance. Northern farmers, therefore, put their hopes in cattle; hence the grids, which will be accompanying me now and making the loud wrrrum! under the vehicle as I fly over them. 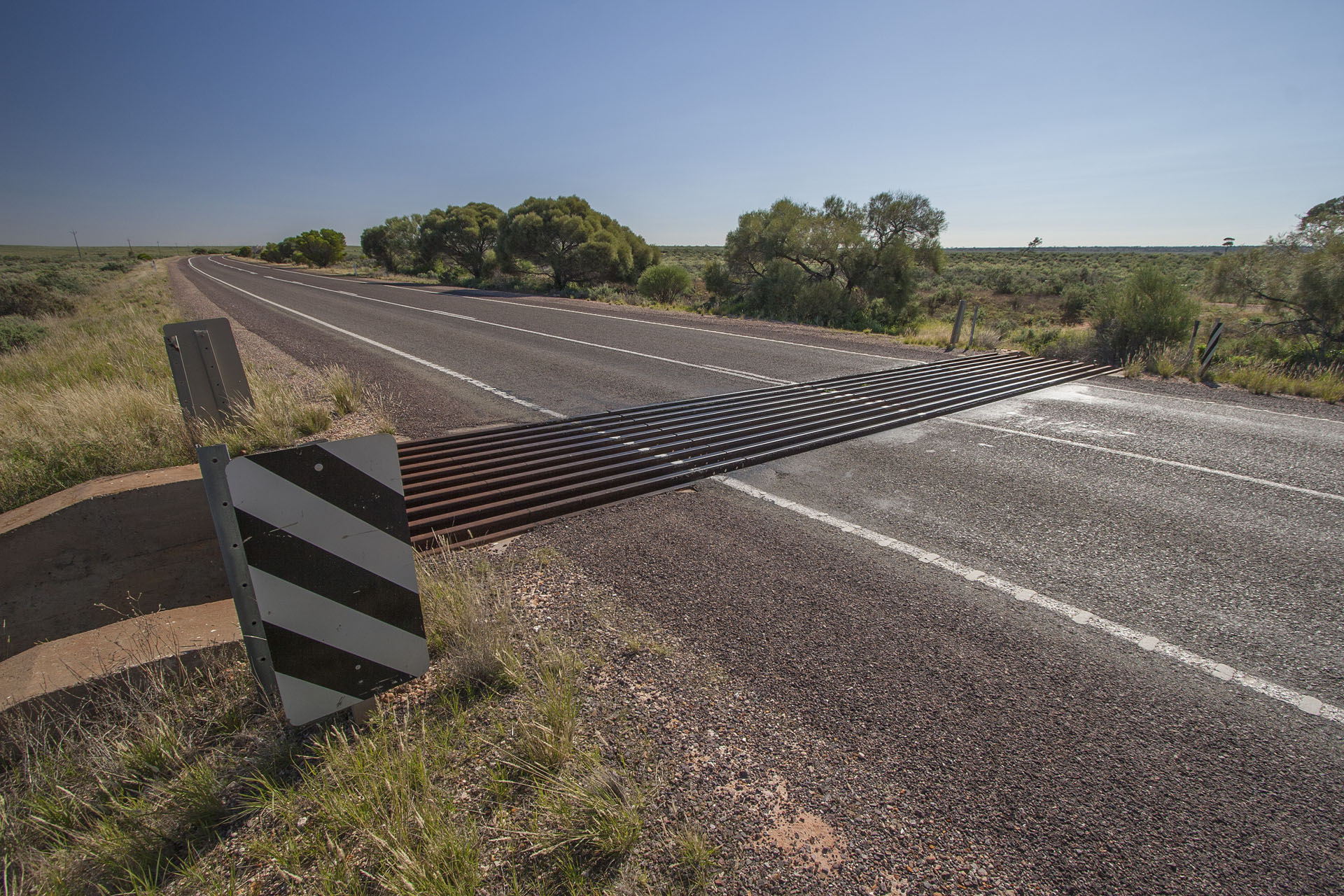 As the road progresses further north, the landscape becomes drier. Trees become shorter and uglier, and most of the time they aren't there at all, replaced by low shrubs and patches of dry grass. This is the typical Australian bush, or the outback, which is what the most of this vast continent consists of. 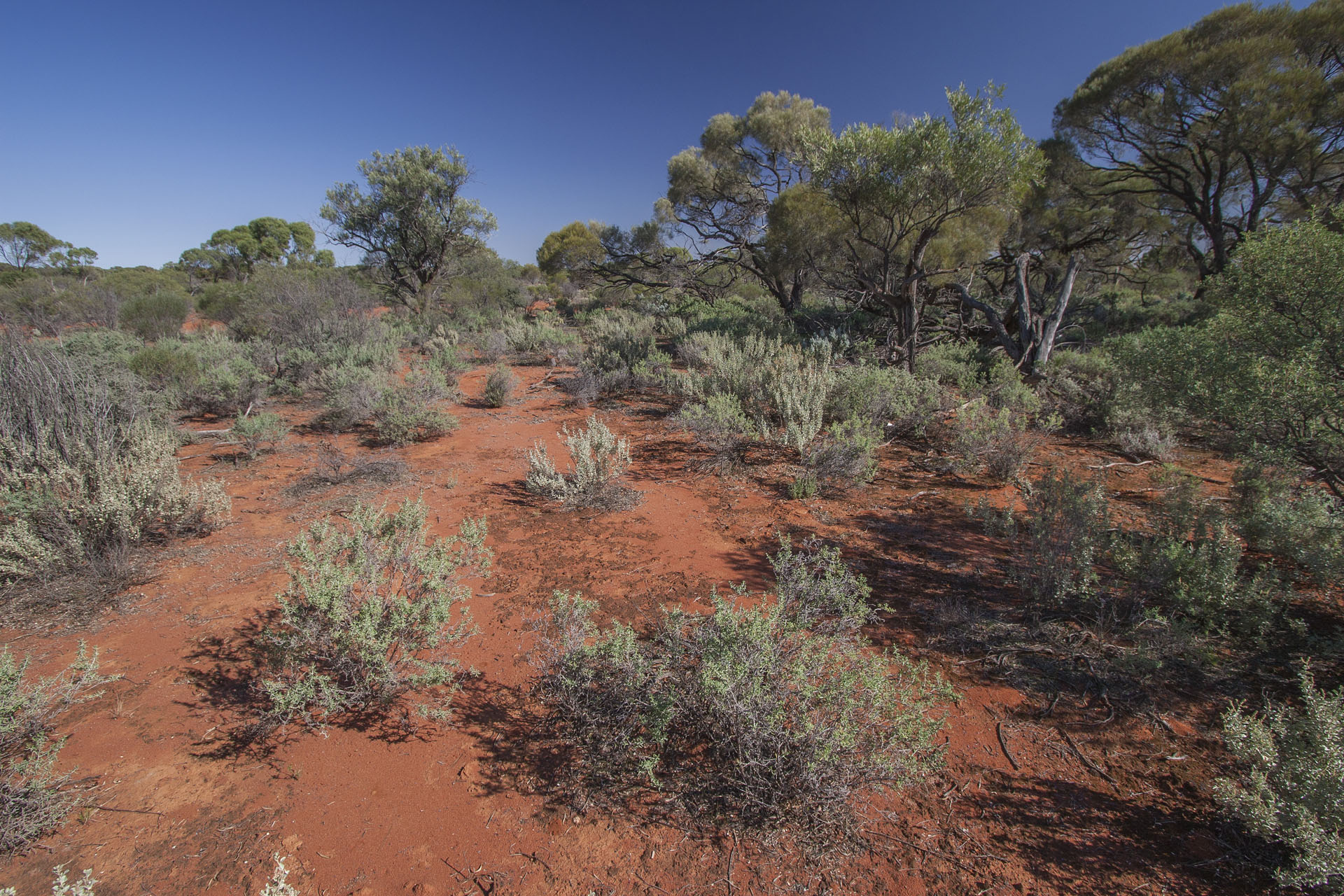 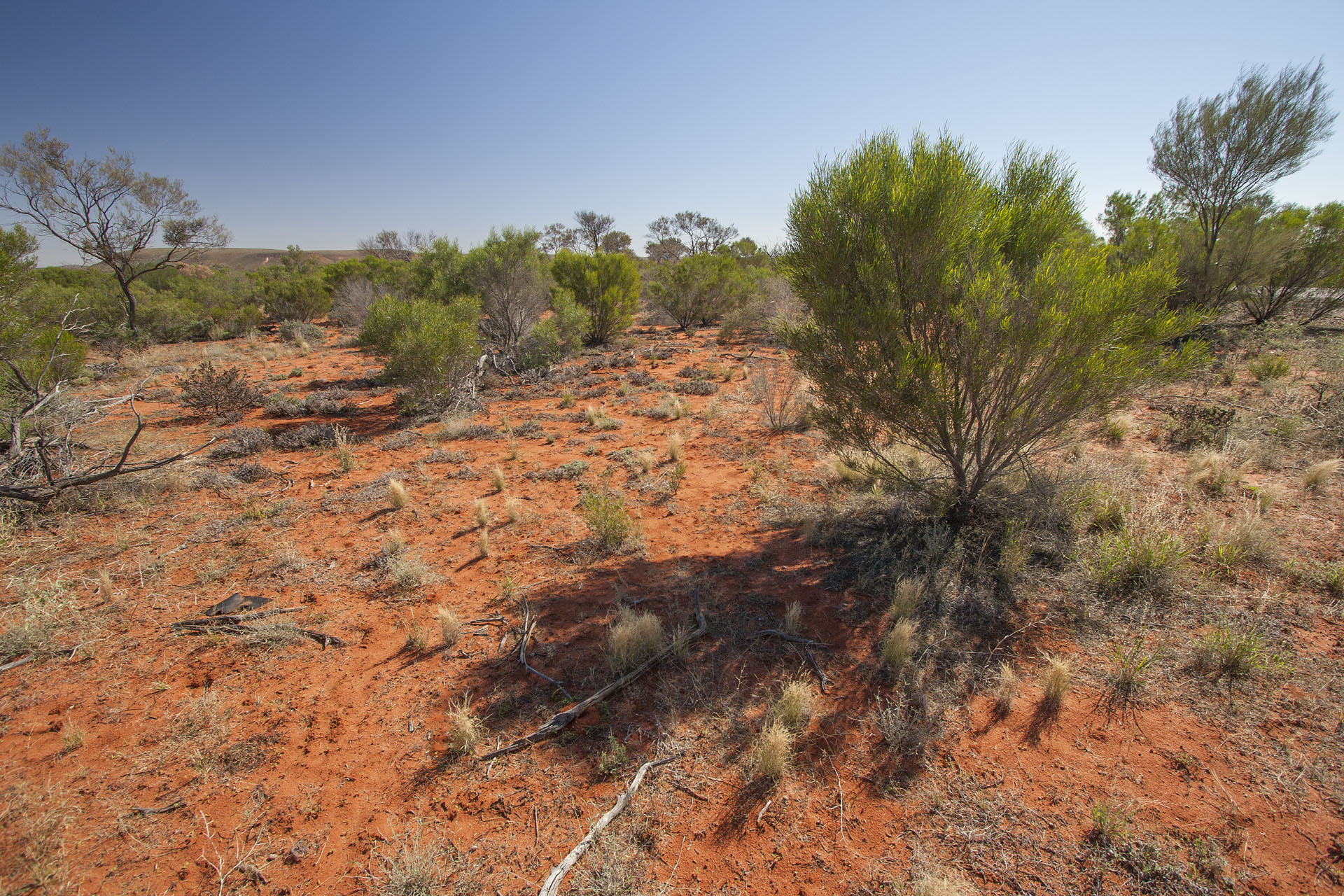 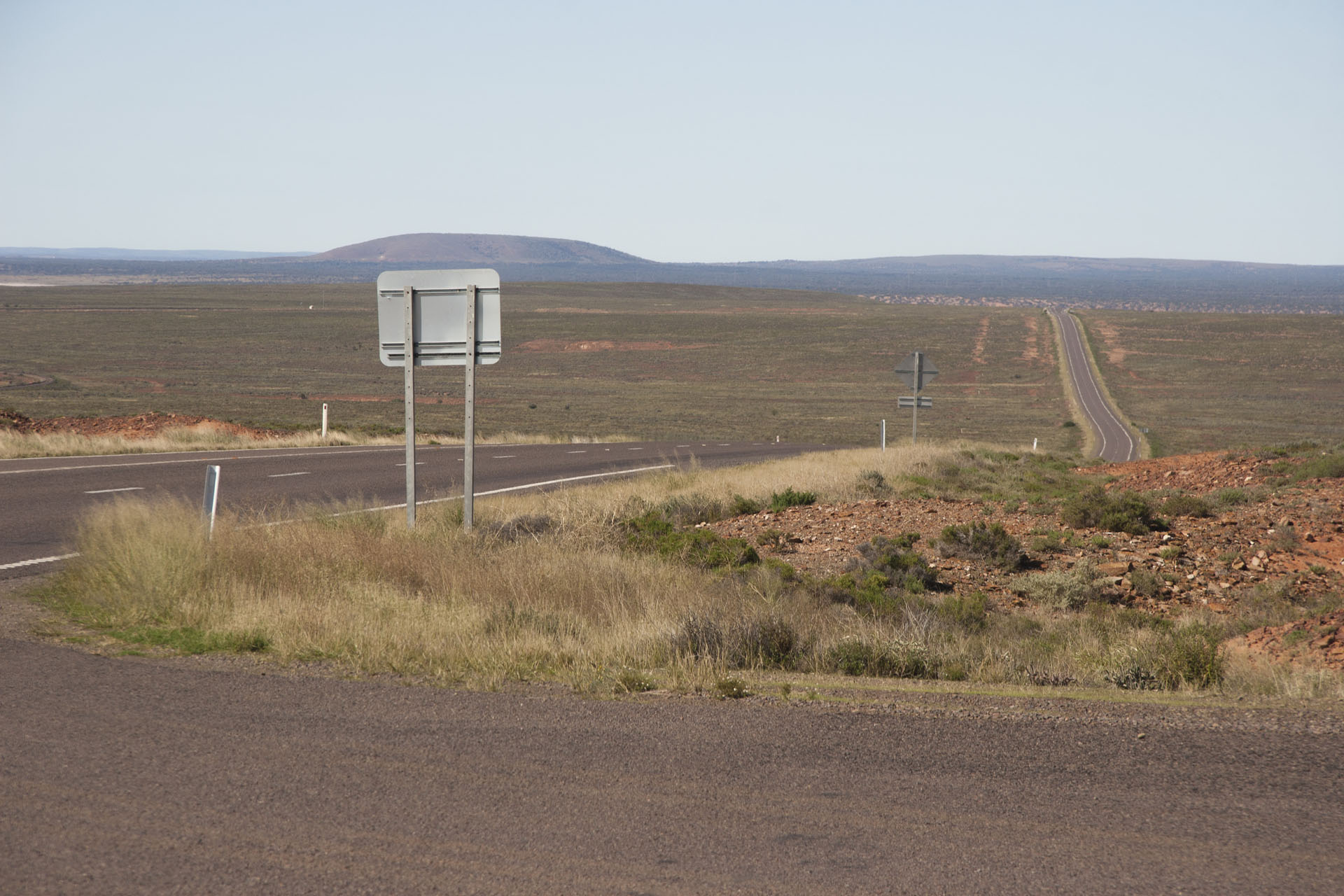 Empty road in an empty land.

Sometimes this boring and plain scenery changes. Most of the time it's salt lakes; this summer was a bit more rainy than usual, so many of them still have water. One of these lakes has an island-like mount in the middle, hence the name: The Island Lagoon. An lookout platform with an info stand are there nearby to let you soak it all in. No coconut palms in this lagoon, though. Not even a pirate shipwreck. 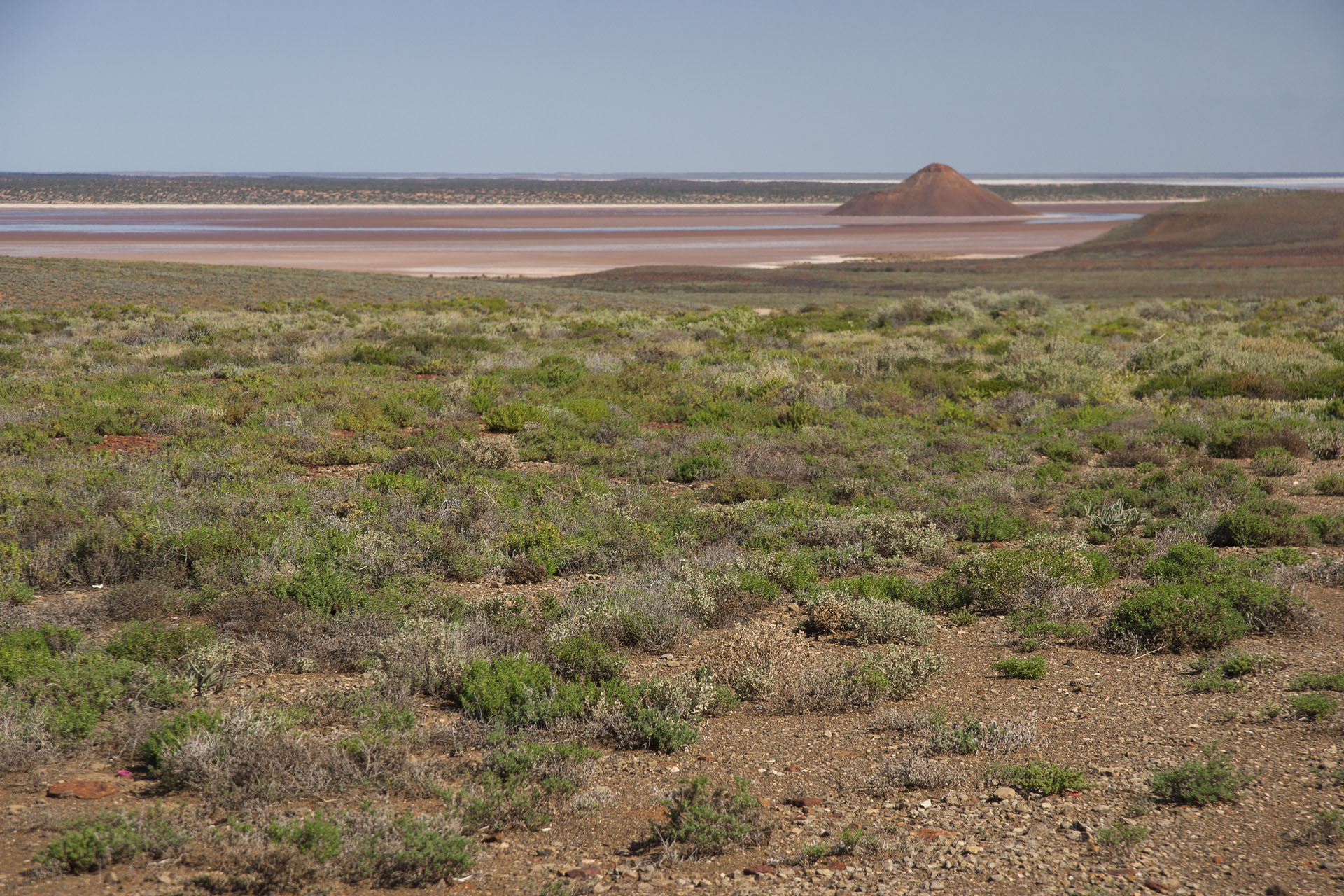 Lake Hart looks like the biggest of all, and it has the most water. The nearby lookout has its share of vehicles, complete with a whole coach bus full of people. Tourists having a swim? Possibly. Beyond the lake, though, the bush is still as dry and arid as it was. 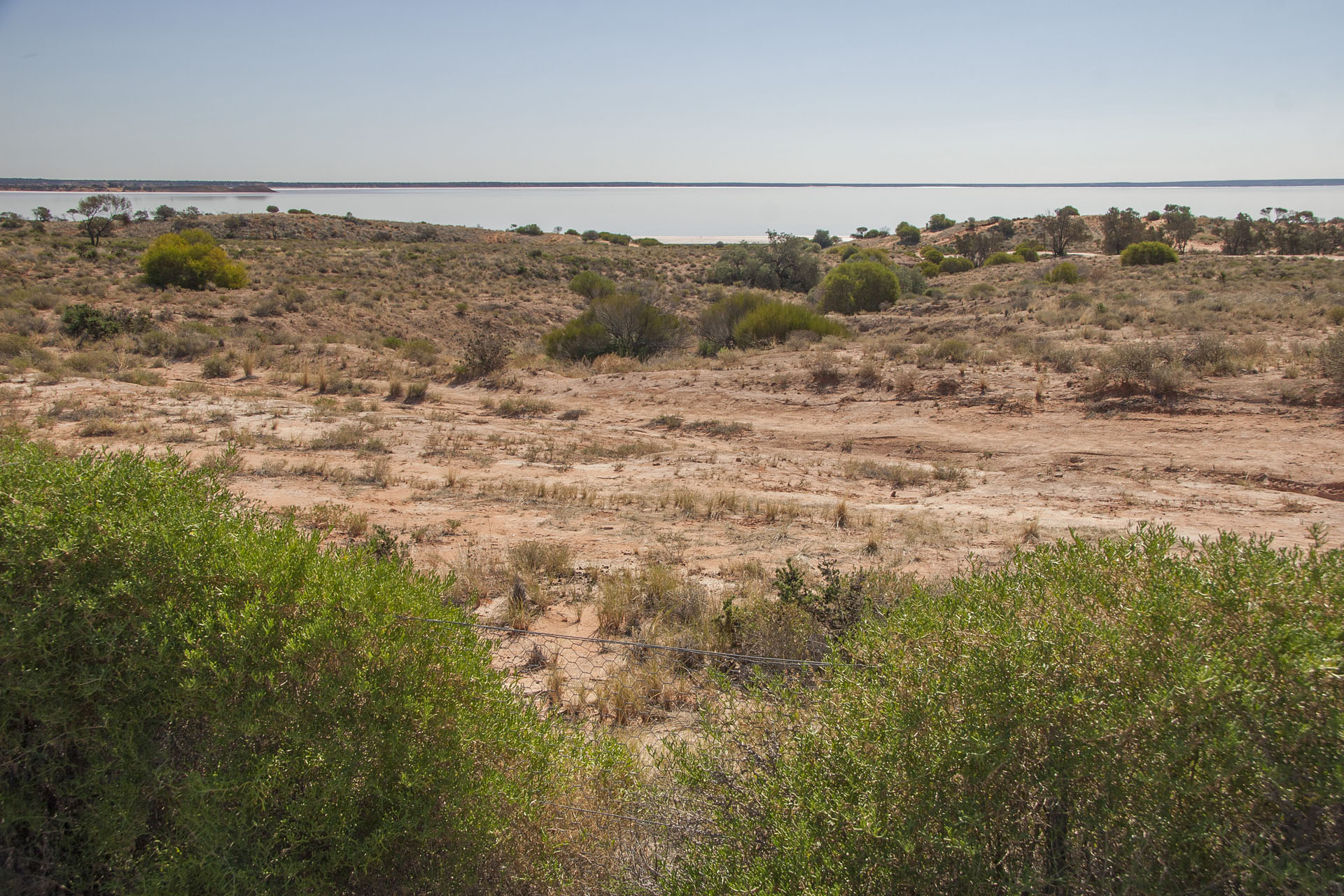 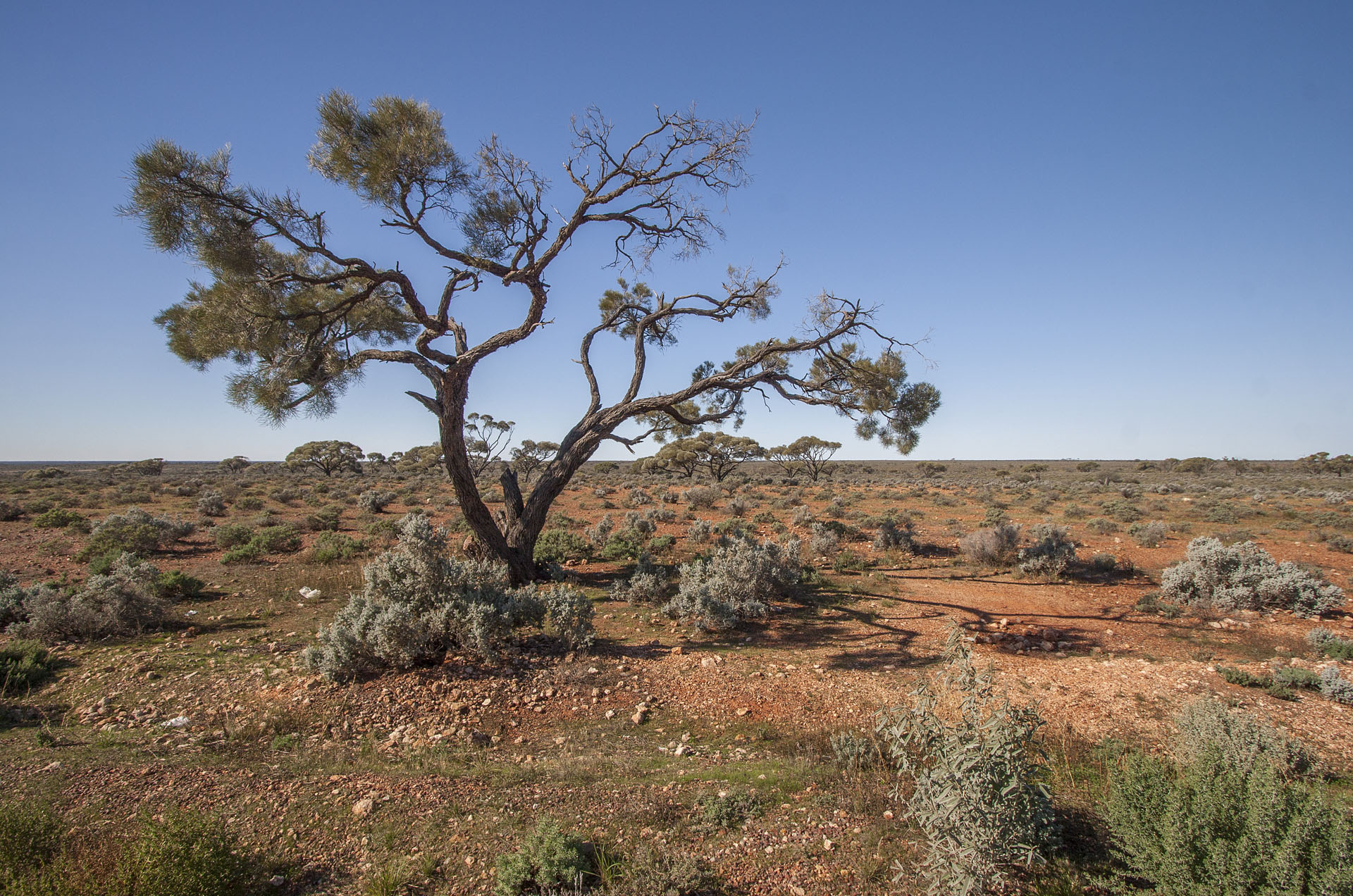 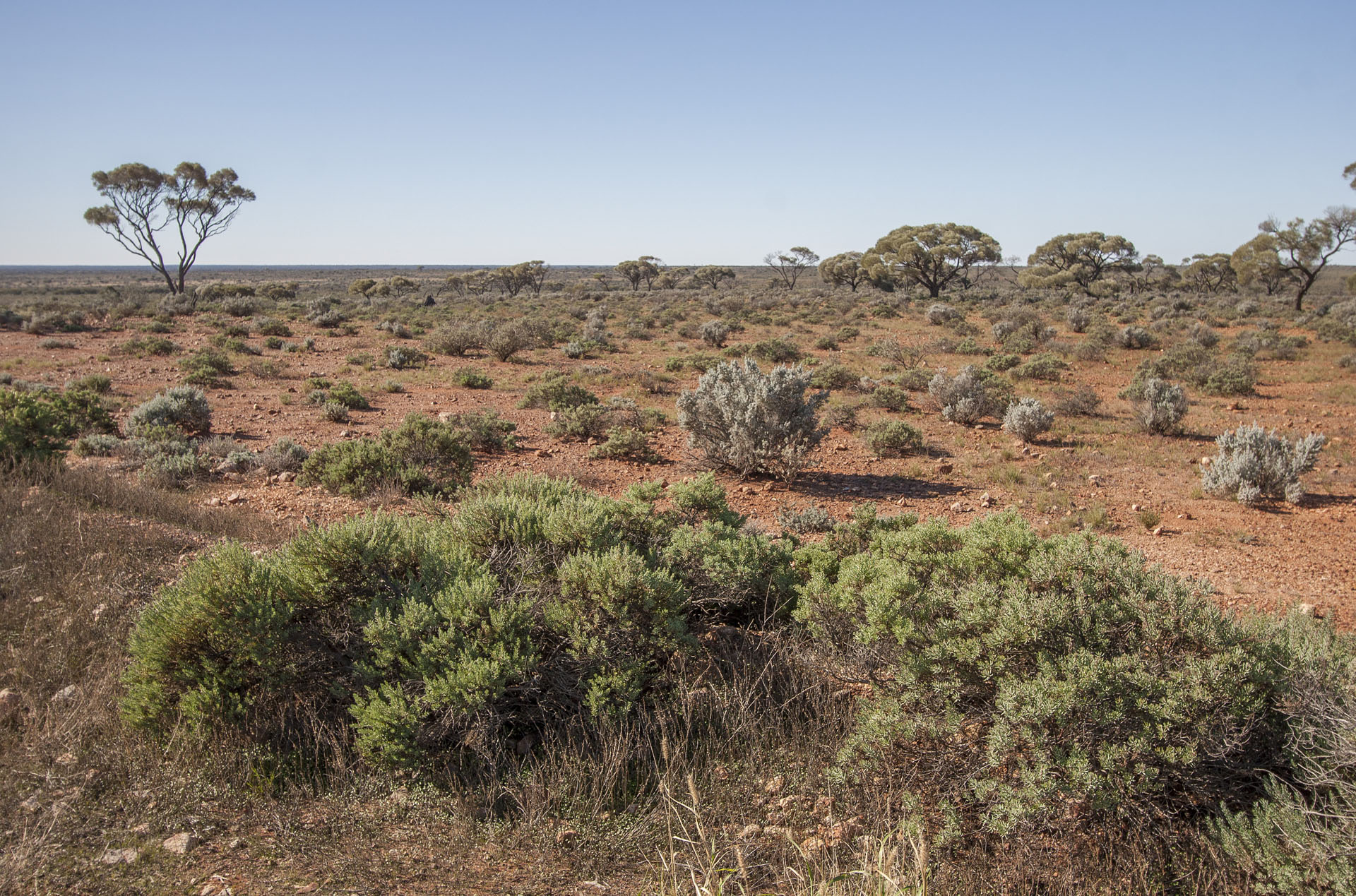 With more desert beyond.

Gradually, the soil under the scrub becomes smooth and purple and is covered with pebble; it all glistens almost like bitumen under the sun. Very interesting look, never seen that before. 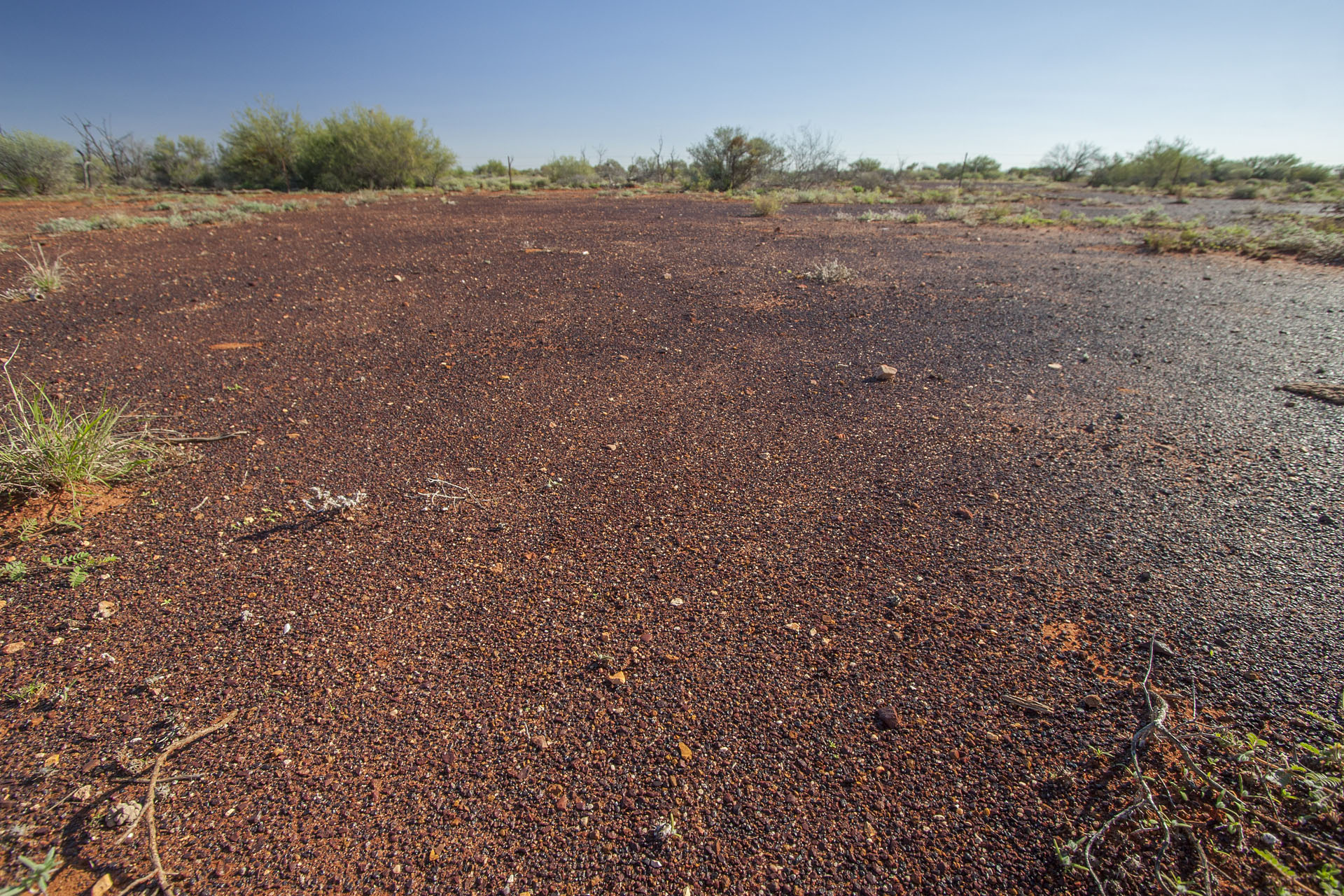 Along with the cattle grids, you can also meet… an occasional airstrip. They're used by the Royal Flying Doctor Service; otherwise, if someone gets sick in the middle of this huge piece of nowhere, it's going to be a very long ambulance drive from the city. The ground is level, and the highway doesn't exactly have a huge amount of traffic, so why not use it for something else as well? 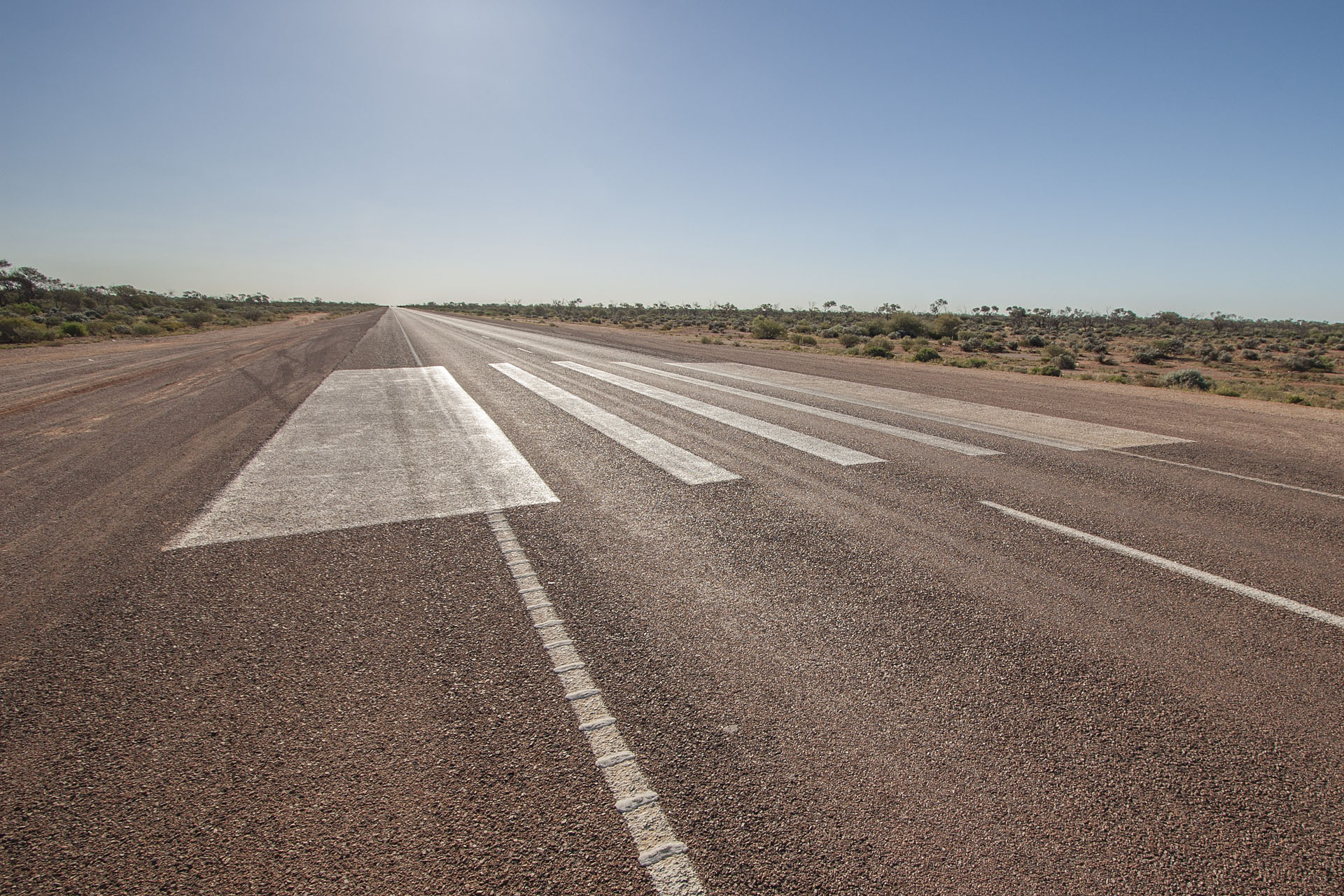 The day is drawing to a close when I finally pass Coober Pedy. It's a relatively big town (population 3000), and it's quite peculiar in many ways: mostly due to it being a major centre of opal mining. Unfortunately, I'm not going to have a lot of time to explore The Pedy this time, so I don't even make a stop there: I want to camp and unpack before sunset. 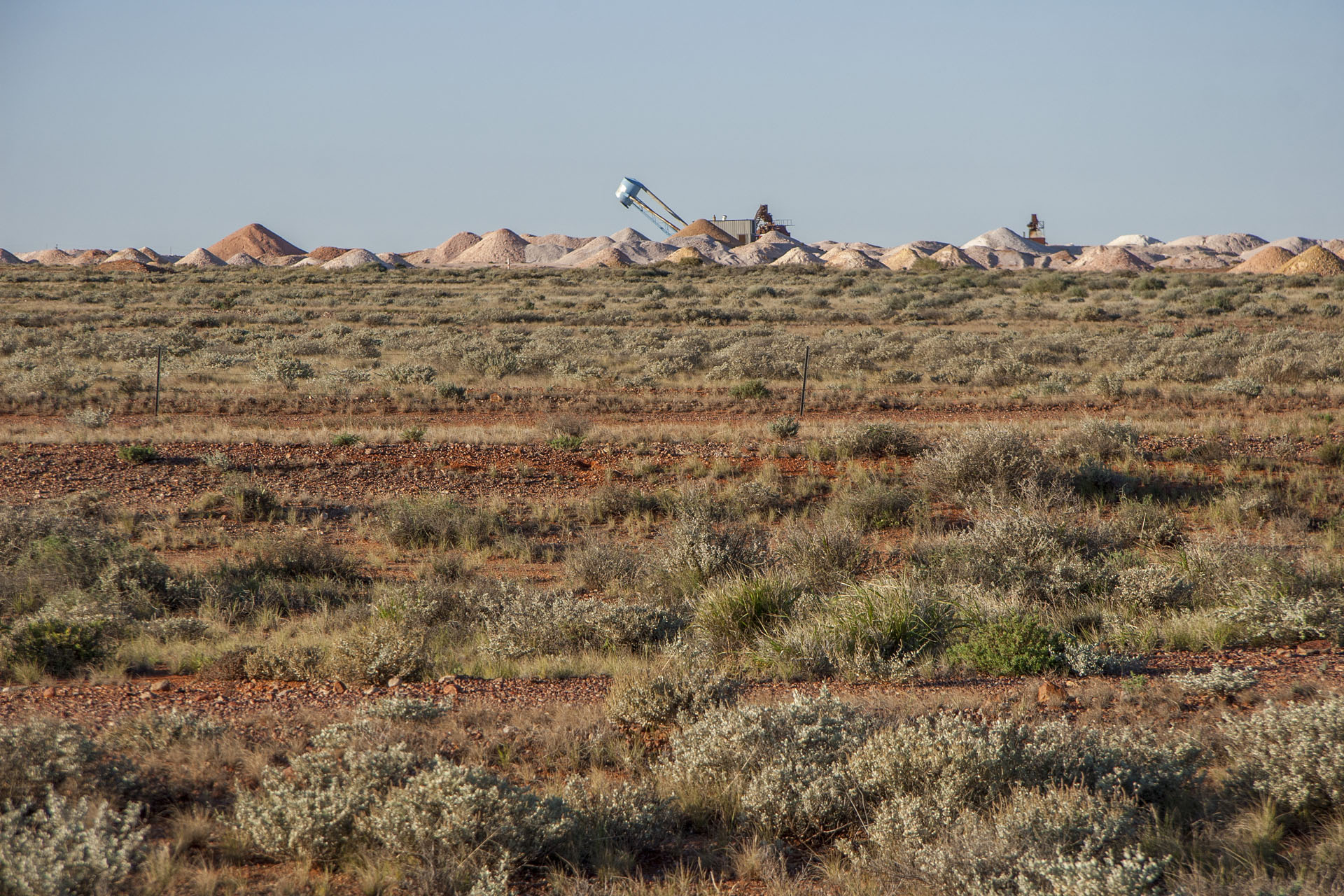 Opal mining is full on. 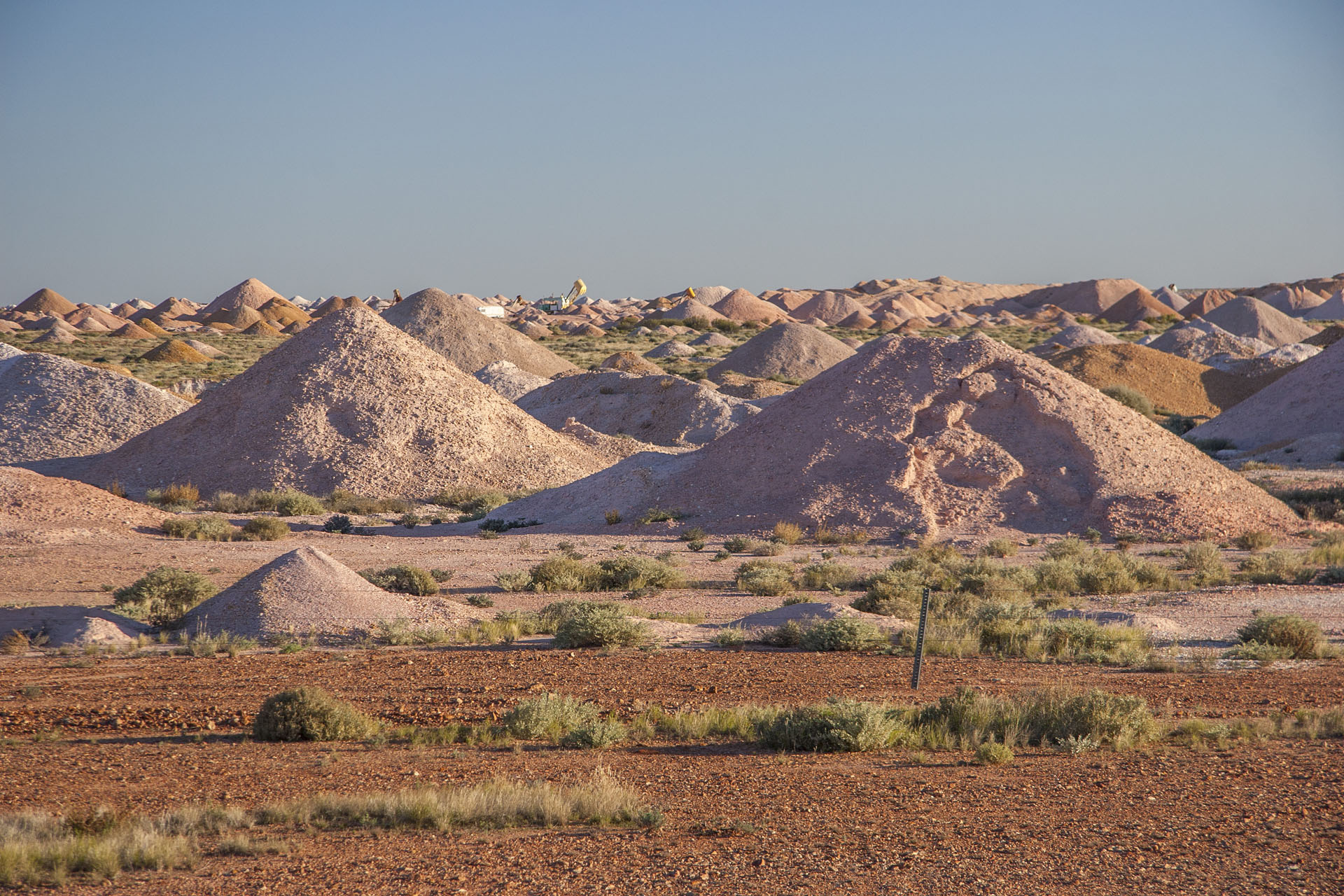 Everybody wants to participate.

Finally I reach the place that I've spotted on WikiCamps and make the turn off road. As soon as I push the last tent peg into the ground, the sun disappears, and mosquitoes take its place—thanks to a creek nearby, which still has a bit of stagnant water in it. Tent is up, so I hide in quickly. Temperature is dropping noticeably with every minute. That's how it is in these parts: if it's stinking hot during the day, it's freezing cold during the night, especially if the sky is clear, as it is tonight. 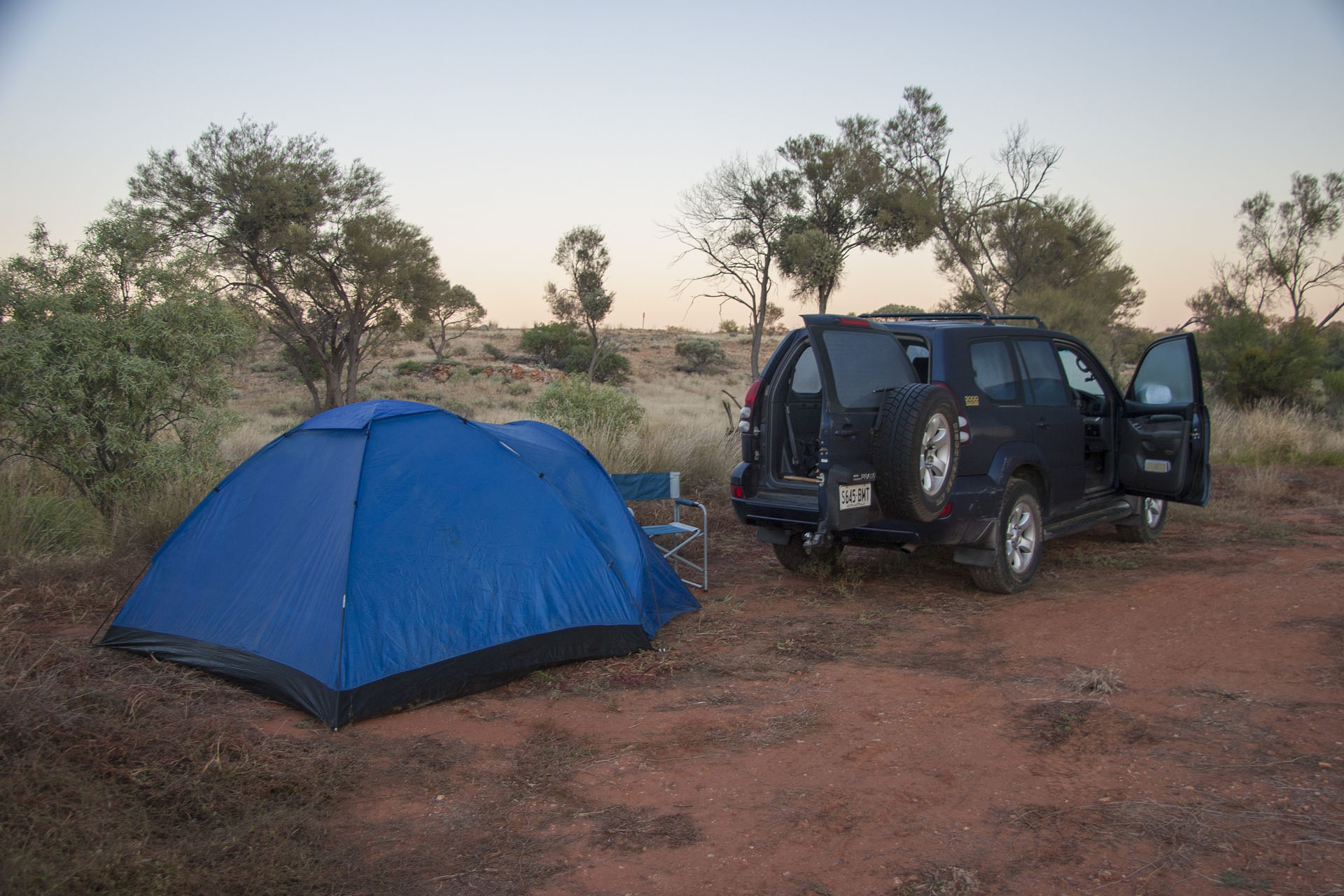 My sleeping bag, courtesy of the Chinese eBay vendors, has a 10°C marking on it, but I wake up a few times during the night nonetheless: first to put on thermals and a T-shirt, then to fully dress up. It's all the more uncomfortable because the inflatable pillow, courtesy of some other Chinese eBay vendor, busted almost as soon as I pumped it up. I throw some remaining clothes under my head and try to think how to get myself out of this particular pickle whilst falling asleep.