Across the Gulf Country

21 Dec 2019 Travels, Gulf Country, Queensland
There's slightly over 2,500 kilometres from Townsville to Darwin, and most of it lies across the vast stretch of land called the Gulf Country. It's a very strange place... or at least it feels strange to me, but more on that later. There are two roads that I can take through the area, and I choose the harder: the so-called Savannah Way, which will take me very close to the Gulf itself and force me to tackle about 500 km of unsealed roads. Sounds like fun? Well, maybe not too much, but there should be a room for adventure in life, eh?

I start off early in the morning, and soon enough I cross the Great Dividing Range from east to west, entering the hinterland. It looks markedly different from the lush and green tropical coastline; the Range acts as a barrier for most of the rainfall, and precious little makes its way into these, progressively more arid, lands. Traces of recent bushfires make it look even more desiccated, and a few of them are still burning in the distance. Must be that time of the year. 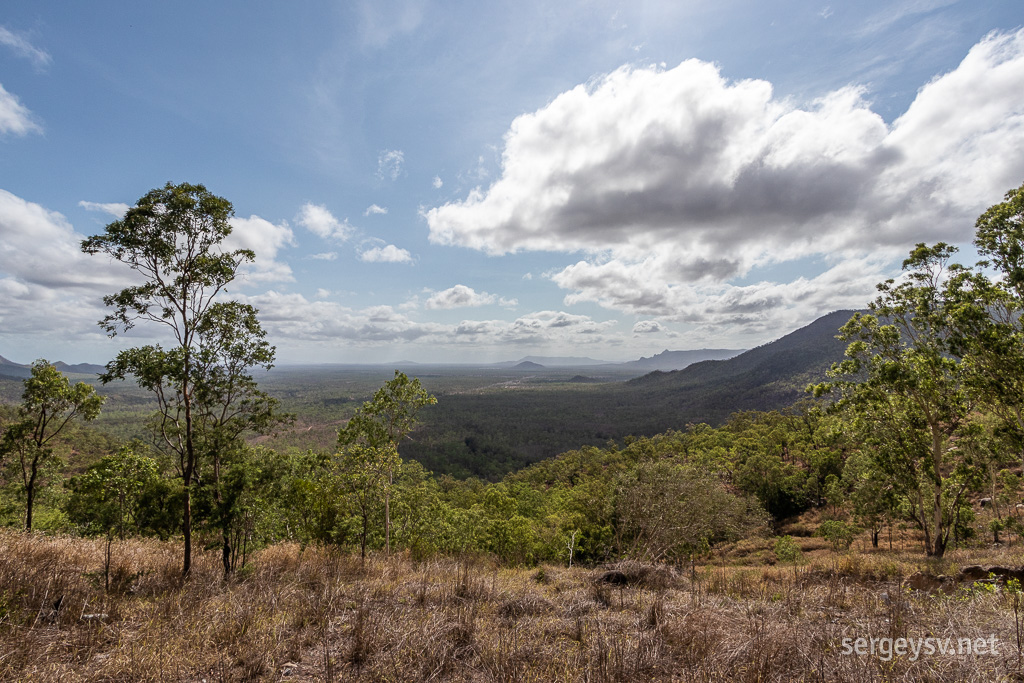 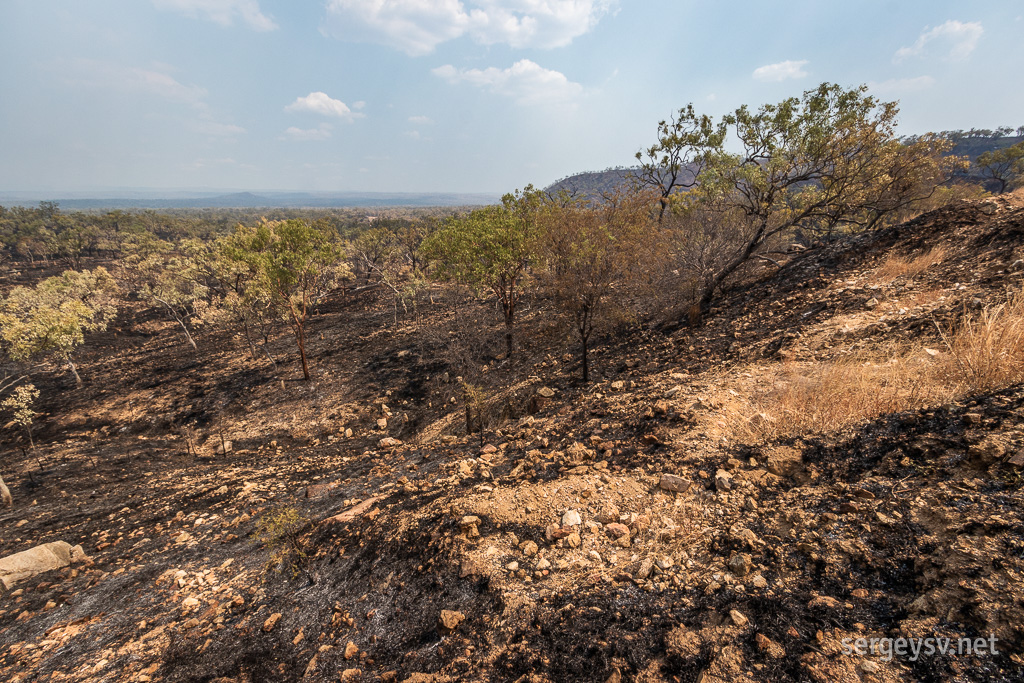 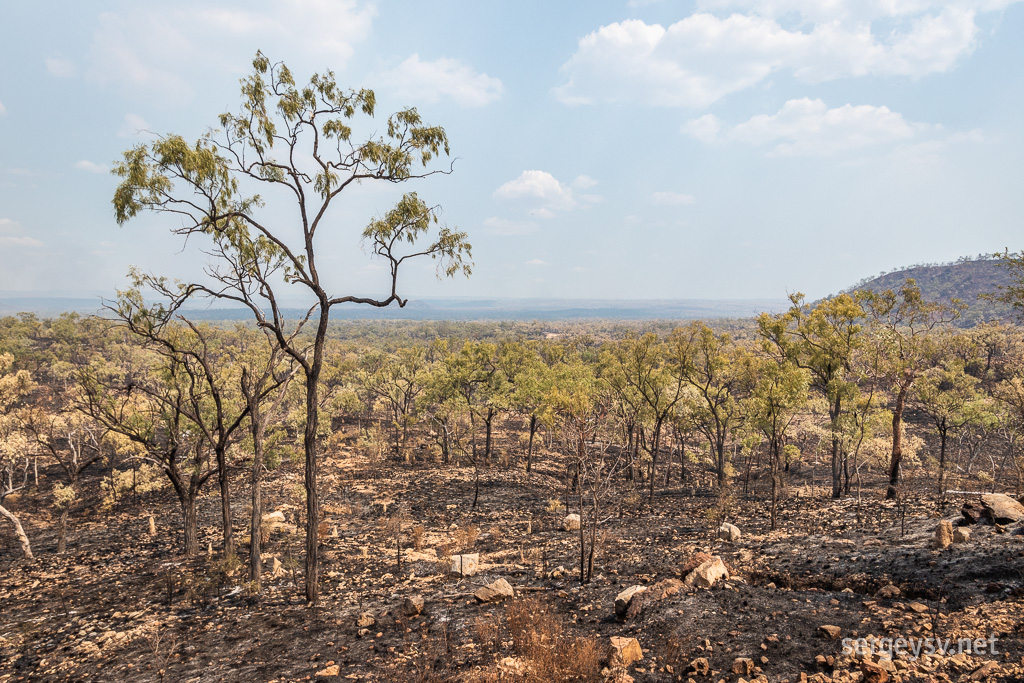 At dusk I reach Normanton, where WikiCamps promises me a free camping spot just outside of town. The sign at the entrance, however, says that it's closed during Christmas period, so I try my luck at the only two available caravan parks, but they're already closed. This leaves me no choice but to violate the restriction and spend the night bush-camping. The night is by far the worst I've ever experienced during my travels... or at least pretty close to it. It's extremely humid and hot, and I can't leave the windows open because of the millions of mozzies swarming around. Even the cute wallabies, who hop around in great numbers, can't cheer me up, and after a miserable night's sleep I wake up super early and leave the place as soon as I can. Ugh. 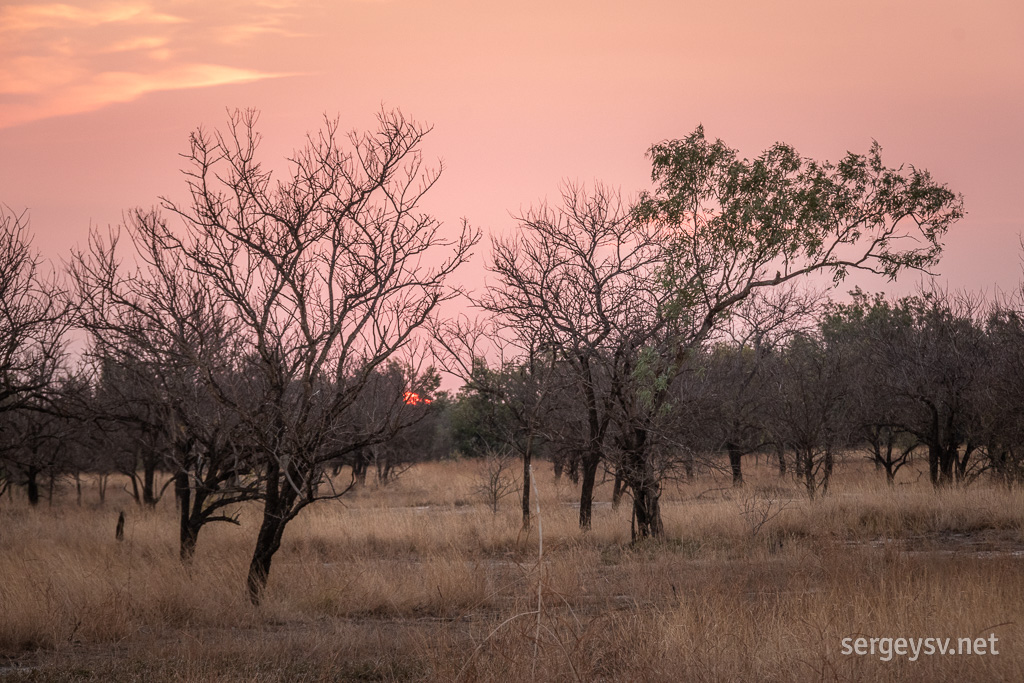 A sunset near Normanton. 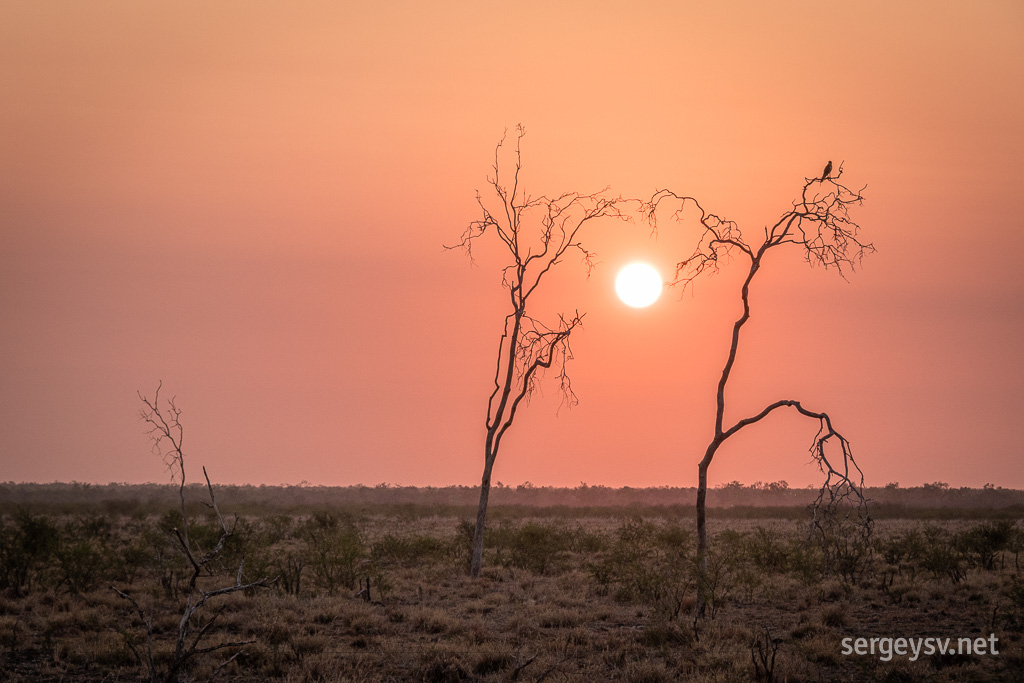 This is where the real Gulf Country begins. Vast plains, covered either with eucalyptus woodlands, or tall grass, or simply nothing at all, stretch far and wide, scoured every year by the monsoonal rains of the wet season. It feels more desolate and strange here than any other place I've been so far in Australia. I felt that vibe the last time I was here three years ago, and now I'm feeling it again as I drive past the numerous woodlands and cattle stations and termite mounds. Something odd and ancient, and not quite out of this world. I don't even know why it feels that way out here, but it does. 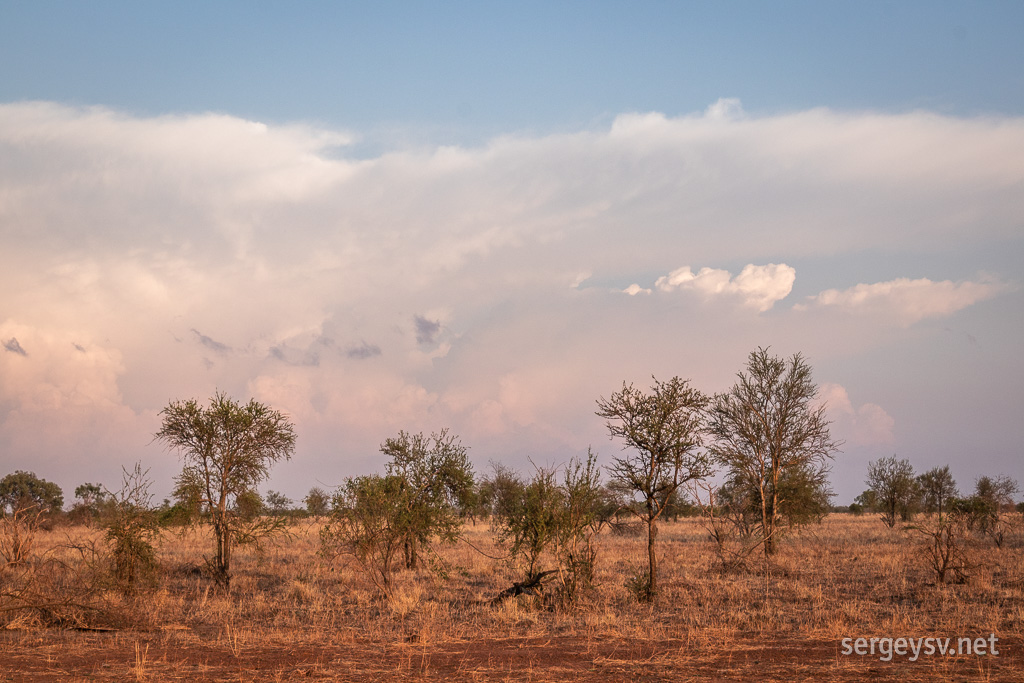 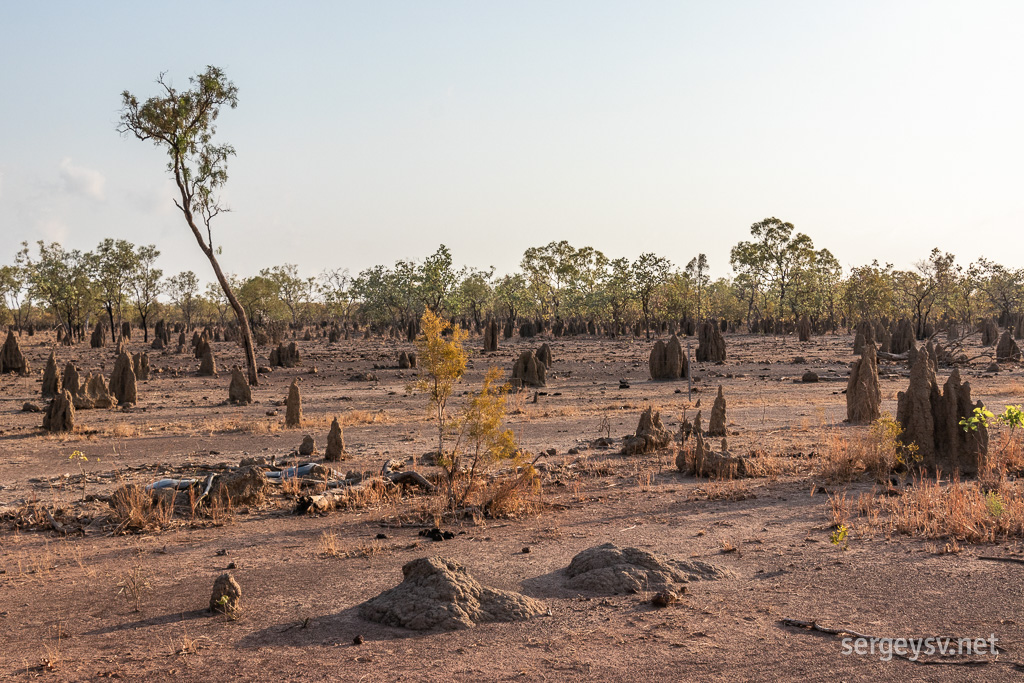 The land of the termite. 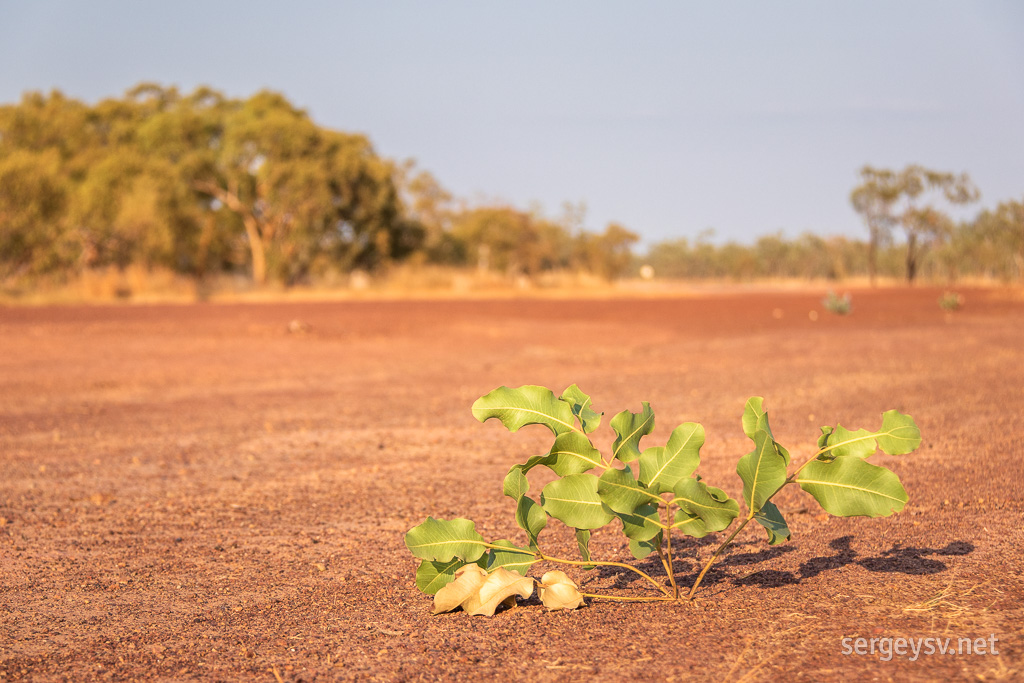 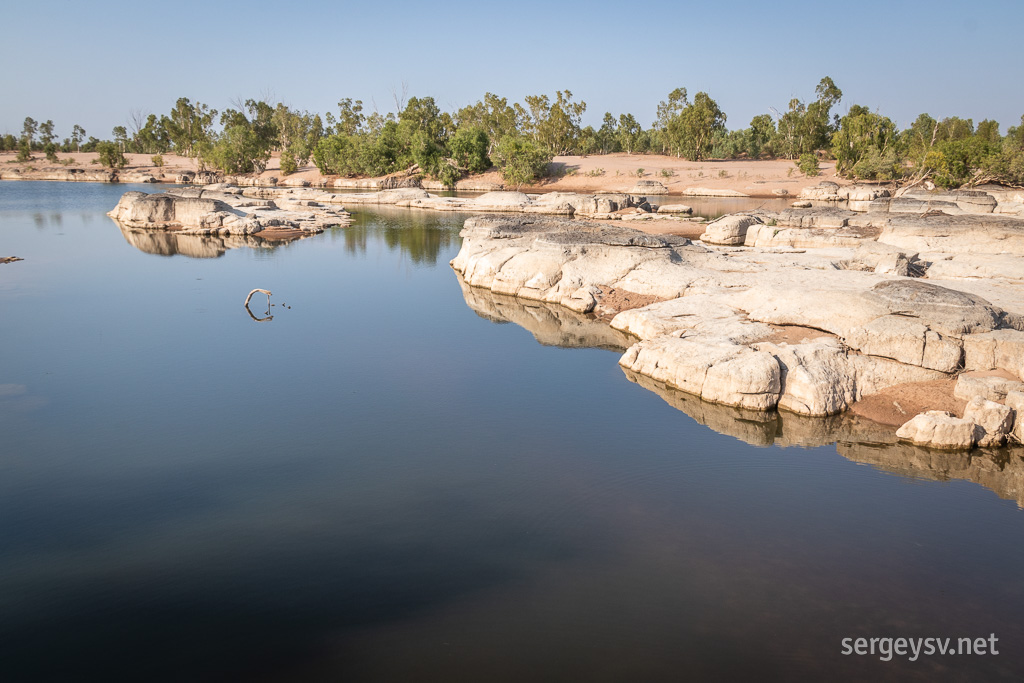 Water levels are still low after the Dry.

This feeling dissipates somewhat when I reach Burketown, a small and isolated town in this odd region of the world. I don't see a single person around, which brings the eerie feeling right back again. Were they all abducted by strange creatures from another dimension, which comes very close to ours here, or the townsfolk simply can't be bothered walking around in this oppressive humid heat? Probably the former. 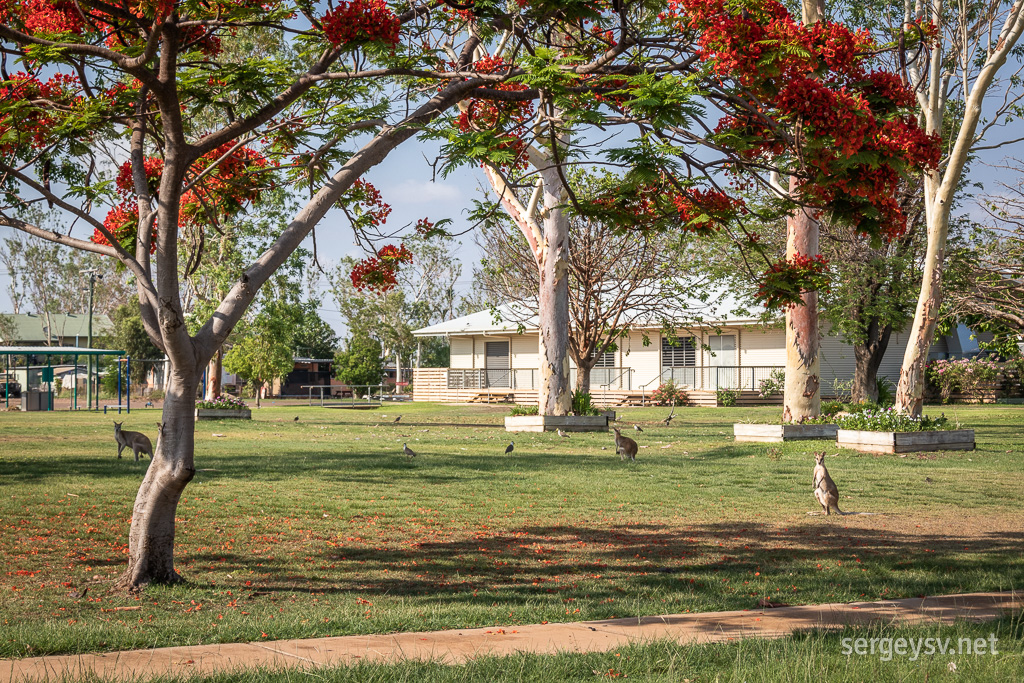 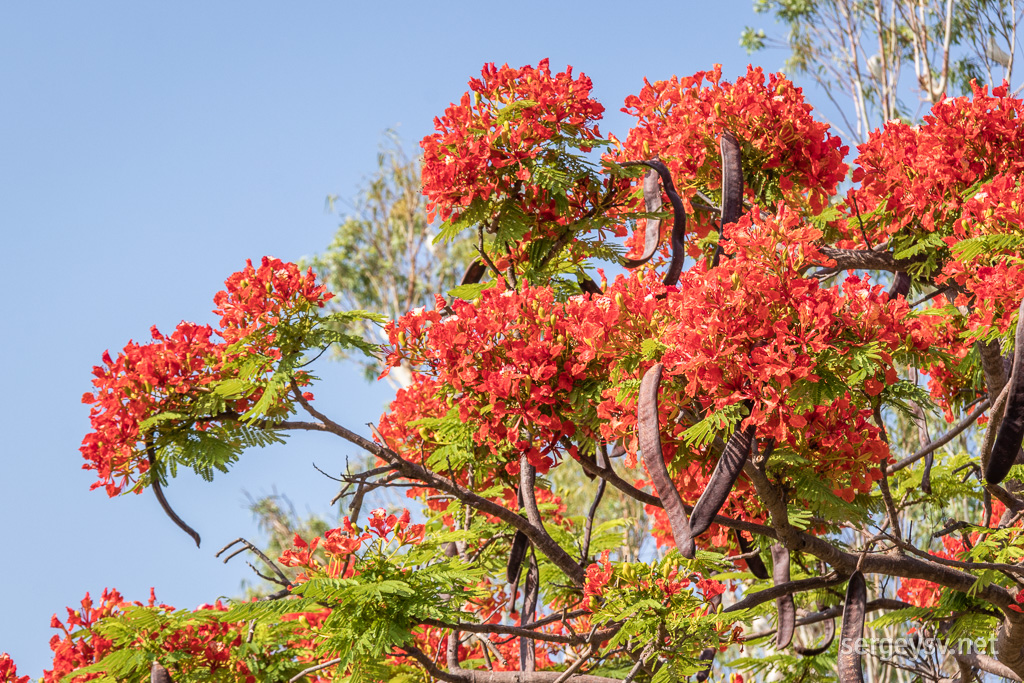 Very peculiar trees. Never seen them anywhere else outside Queensland.

As I cross the border and enter Northern Territory, the road begins to deteriorate. The further and further I go towards Borroloola, the more and more horrible the corrugations become. I'm also progressing northwards now, and the proximity of the wet season begins to show: the clouds become taller, puddles of waters begin to appear in the ruts; and, as I finally reach Borroloola, I even get a couple of quick rain showers myself, along with a few glimpses of a distant thunderstorm. Nice! I even spot quite a big frilled lizard, running hastily across the road on its hind legs, and its slightly crazy appearance adds even more to the slightly crazy vibrations of this land. 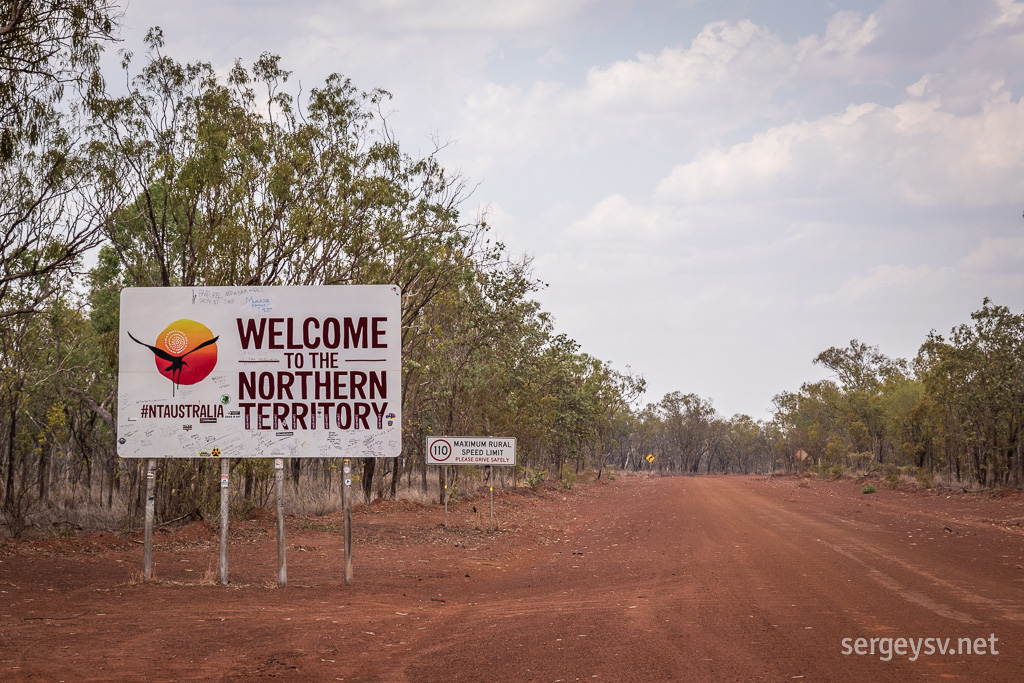 The road begins to slowly worsen. 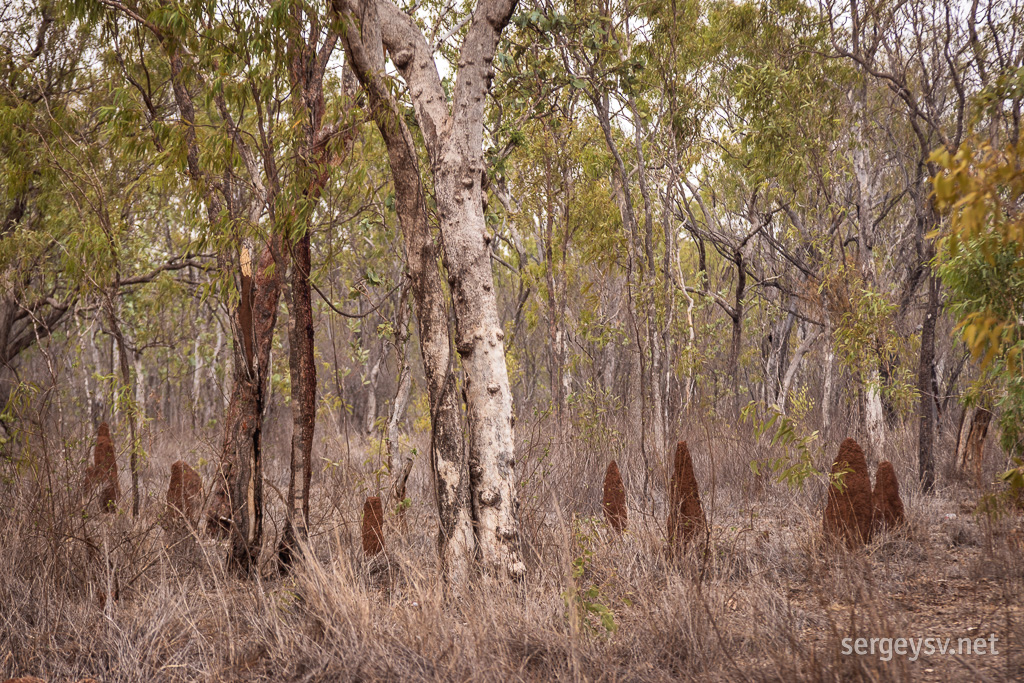 Termites reign in the undergrowth. 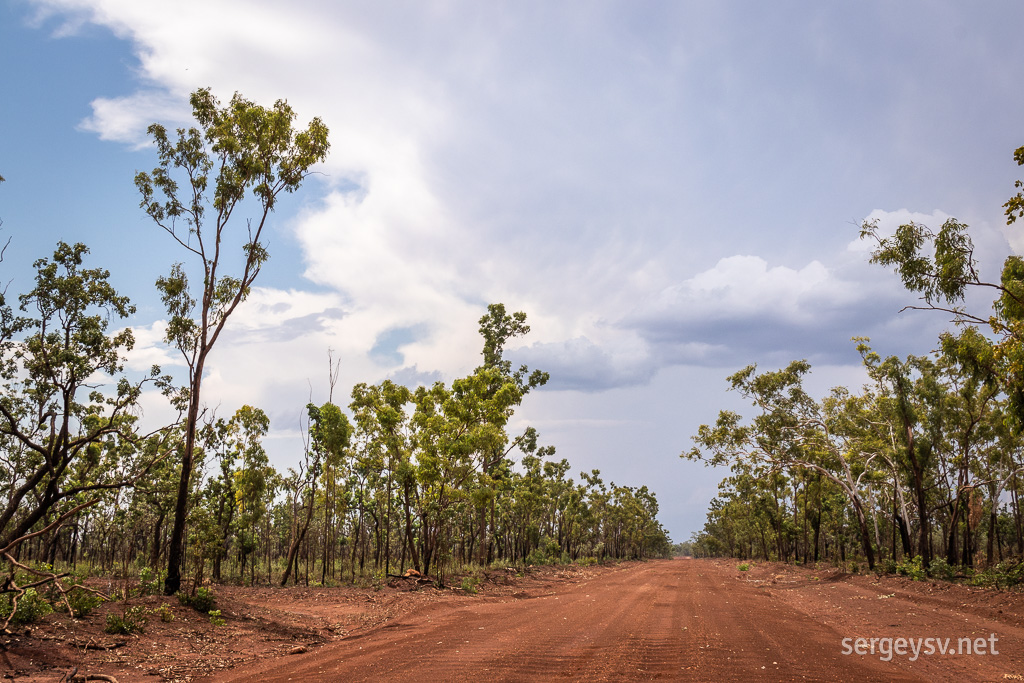 The road gets bumpier, the trees get greener. 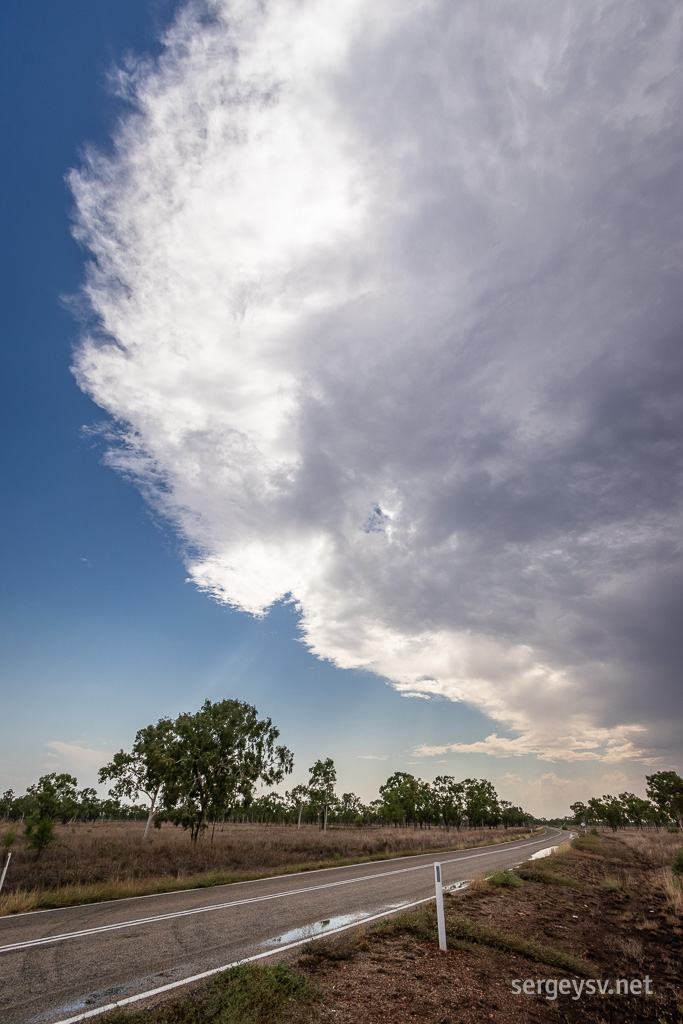 I sigh in relief when the dirt road finally ends and bitumen begins... but my adventures, as it appears, are far from over for the day. As I drive towards the Stuart Highway and the afternoon is growing late, numerous wallabies come out of the bush to drink from the puddles of water on the road. Most of them keep to the roadside and mostly disregard me as I drive past; one of them, however, decides to hop away and then suddenly jumps right under the front right wheel of my car. I barely feel the bump, but as I look at the rear view mirror, I can see that the poor creature is obviously dead. Dammit. I've made over 50,000 km so far all over Australia, and, unfortunately, hit a fair number of birds and squashed a few snakes and lizards, but this is my first ”real“ roadkill. I can't say that it feels very pleasant.

By then I'm beginning to run out of fuel, so I stop at Cape Crawford to fill the tanks. Not all the way up, of course: fuel is ridiculously expensive here, in the middle of nowhere, and back on the Stuart Highway there's a roadhouse where it's going to be a lot cheaper. I help myself with about 40 litres of diesel and take off... but as I drive on and on, watching the rapidly setting sun, I see the fuel indicator lighting up, and there's still about 100 km left to the Hi-Way Inn. Uh-oh! Looks like someone's misjudged the consumption rate.

To save valuable storage space, I don't carry a jerry can with me this time around, and now (together with my parsimonious negligence at Cape Crawford) it can seriously bite me in the nether regions. There's no mobile signal here yet, and the vehicles are very few and far between. I stop one as I see it approaching me from the opposite direction, but the Aboriginal family there says that they're almost empty themselves (or they simply can't be bothered to help me, which is fair enough). For about half an hour, increasingly nervous, I drive carefully, limiting the speed and revs and trying to figure out where to camp if I dry out before I reach the roadhouse. And guess what? I do make it there after all, on my own four wheels, as the indicator keeps screaming silently in despair! With enormous relief I fill my both tanks up to the brim. Now at least I know how much I can squeeze out of my poor Prado whenever the Indicator of Thirst switches back on.

It's pretty dark already by now; thankfully, I don't have much left to drive. Only 10 km to the north brings me to Daly Waters, which is another roadhouse with a fair bit of camping space, free of charge. I can't say that the street lights installed all over the place are particularly helpful for a good night's sleep, but after what I had in Normanton, this is certainly an upgrade – and no mozzies, either!

Looks like I'm out of the Gulf Country by now, not much worse for wear. Even the car seems fine, despite the near-death of thirst and the horrible corrugations of the Savannah Way that I put her through. And even if there's something wrong with her, tomorrow I'll already be in Darwin, where I can surely find help if needed. Hopefully I won't get into any more trouble on the road till then!